Home Features Motorcycling in India: Instances that make your soul shiver while on the road 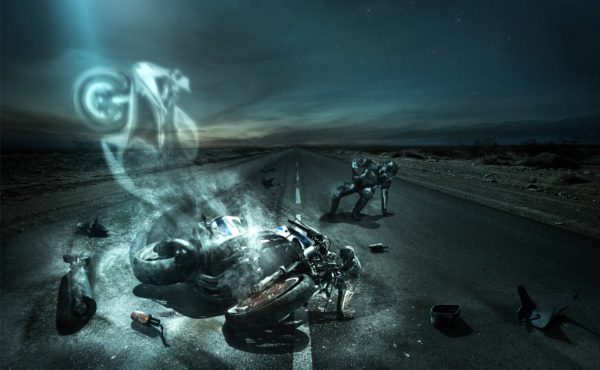 So they say four wheels move the body and two wheels move the soul. However, what if while feeding some two-wheeled soup to your soul, an experience on the road makes that very invisible part inside want to curse you for giving it an escape route out of your body? What do you do when you find yourself and your machine in a ‘what the duck’ situation, even when you do everything by the book?

The naked truth is, we live in a country where traffic rules are followed just because we don’t wish to be caught by a whistle equipped saint, who is waiting for his next prey to jump a red light and make a compulsory donation to his weekend alcohol fund. If we had our way, we’d equip our driving machines with howitzers and blow up everything that stands in our way and dictates rules.

Now, unless you have been foolish enough to spend more and buy a car with airbags and such other stupid safety features, you might feel safe while being enclosed in a tin-box which has failed all the safety tests and comes devoid of juvenile equipment like balloons which inflate on impact to keep the child inside the car happy. Equipment which people think we Indians don’t need, as they now equip our cars with a specially designed dashboard which has space for our gods and who we must hope are kind to us. However, there is still no such provision for motorcycles and if you are astride one in India, your only option is to live on your prayers. 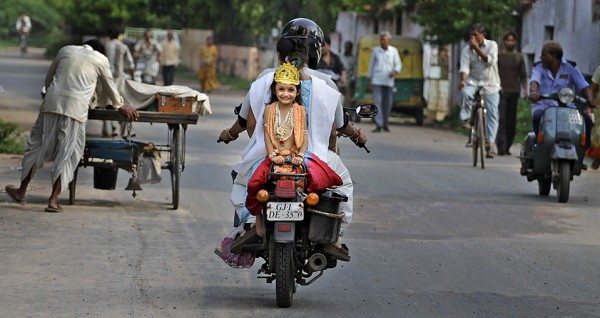 So what are these situations we think could put your heart and peanuts in your mouth?

Instance #1: Red after dark is Green

Let’s begin with a dilemma, where breaking the law does actually come across as the sensible thing to do. Although debatable, ignoring a red light might actually save your life sometimes. Imagine its late in the night and the traffic is sparse. Taking inspiration from a TV show, hosted by an actor who wants us to be better citizens, you come across a red light and although there is no one in sight, instead of thinking red as green, you stop. However, there could be someone behind you, to whom motorcycles on the road are invisible and traffic signals in the night are like fancy street furniture. As you glance in your RVM, that someone starts to approach at an alarming speed and before you could curse yourself for being nice in a world so bent, that man hits your motorcycle, tosses you several feet high up and on your way back down, you see your soul depart to go see the ‘Mangalyaan’. There must’ve been someone who has lived this situation and if still alive, might agree that not following the rule that night could’ve saved him of the injuries he now lives with. Although it would be a better idea to stay on the extreme left in such situations, you might come across a similar red light one night, what would you do then?

We are an animal loving country, explains why we hardly witness any PETA protests, not even the ones where people are dressed. Explains why animals on our roads are as common a sight as are gun wielding hooligans in our neighbouring nations. Cows are sacred, so people are scared to shoo them away from the road; in fact, some think that their journey will now be uneventful since they came across one. However, these thoughts wouldn’t be shared by that bloke who is following a large bus on a motorcycle, when the bus driver does nothing to slow down, takes the other lane, misses the cow and leaves the ‘Moowtorcyclist’ to deal with it. Although a good rider will always keep a safe distance from tall, large vehicles which obstruct the view ahead. 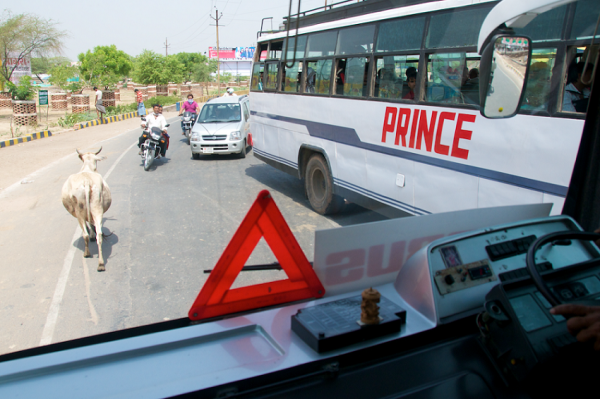 A dog is a man’s best friend, but the friendship suddenly comes apart when a human is astride a bike. If stray dogs had their way, they would take a protest right till the Parliament, asking for all the roads in this country to be declared as their ancestral property. Their agitation has gained some real momentum these days, as they are now found across some tracks in India too. Similarly, goats, sheep, chickens and a variety of such animals decorate our roads and lurk in the bushes until they see an approaching biker and decide to test his safety gear. Think you have developed some skills over the years to dodge such creatures on the road, please do share it with us. 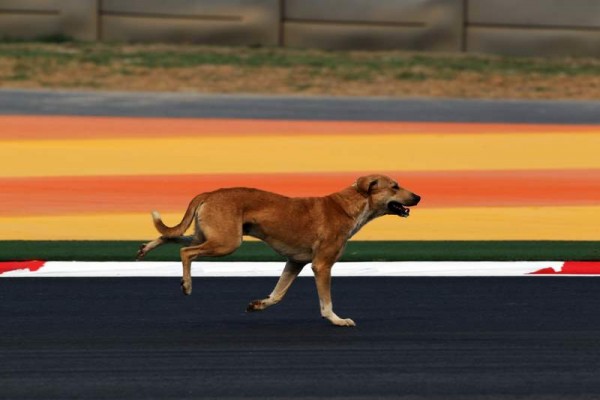 Someday, somewhere, some fake religious character predicted that a billion tonnes of gold is hidden beneath the roads in India. Most of the authorities involved in road building are disciples of that person and are hell-bent to prove him right. So that the digging process becomes easier, they build roads which infest themselves with potholes that are sometimes large enough to swallow an entire motorcycle. Their attempt to increase the gold reserves of India is assisted by cable companies, civic authorities who leave drain holes open, road contractors who think leaving loose gravel, pebbles and dirt on roads increases traction and gives riders a taste of Rossi’s ranch. Some really smart chap who once visited Europe came back so inspired by paver blocks, he wants them to be laid out on every intersection in the city. He doesn’t wish to make the job of all the other gold diggers difficult, so he wants them to be laid out loose, with gaps large enough to entangle a front motorcycle tyre. 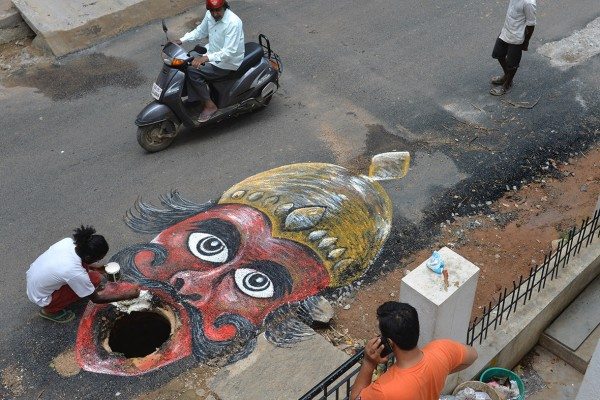 Instance #4: Four is bigger than two

Our country perhaps leads the world in terms of rags-to-riches stories. With so many people moving up the ranks every day, the first thing they probably do is shun the commuter motorcycle and go buy themselves a car, which in this part of the world is a way to convey to the world, that you have arrived. In areas where the roads are predominantly single-carriageways, such people go crazy when they see someone approaching from the opposite side on a motorcycle. If they have to pass another vehicle on a single-carriageway, they like to think that the approaching motorcycle on the other side either doesn’t exist or as if it’s their past coming back to haunt them. They will ensure they force the oncoming motorcyclist to go off the road and scare the living daylights out of him. In other instances, if such people have to take a U-turn, they would again turn blind towards the approaching motorcycle, complete the turn and then look at you like you are the poorest man on earth to be still riding two wheels. 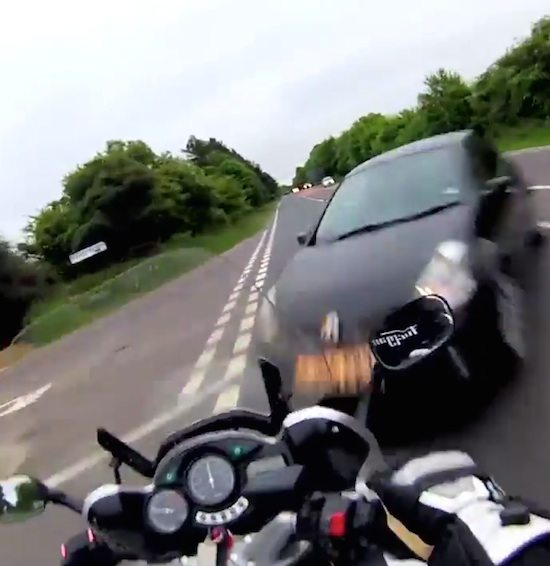 Most motorcycles in India are equipped with a headlamp as bright as a candle. No wonder then, larger vehicles see and consider oncoming motorcyclists as cheap Chinese lanterns in the dark. Trucks, cars, buses and everything which has more than two wheels will flash their high beams at a biker in a sadist manner, as if that person is a wanted, hard core criminal, locked in a dark room, tied to a chair. To further help their cause, motorcycle manufacturers in India think that anything more than a 35w bulb inside a poorly designed reflector unit, will light up the road too much and mellow the death-defying experience of riding a motorcycle after dark in India. 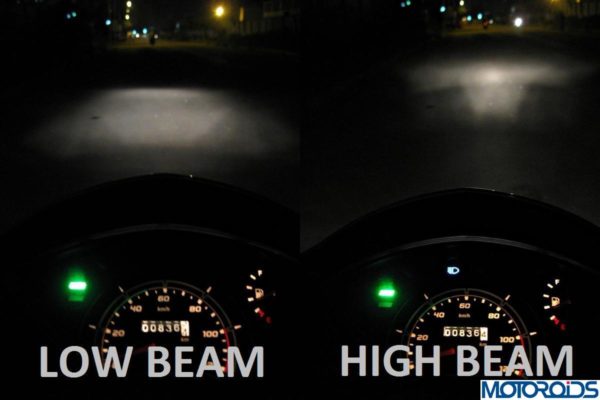 If you ride a motorcycle in India, are still alive and able to type or write, do share your experiences, suggestions and everything else in the comments section below. If you have mastered the art of adaptability and can share your survival tips with others, we’re waiting.