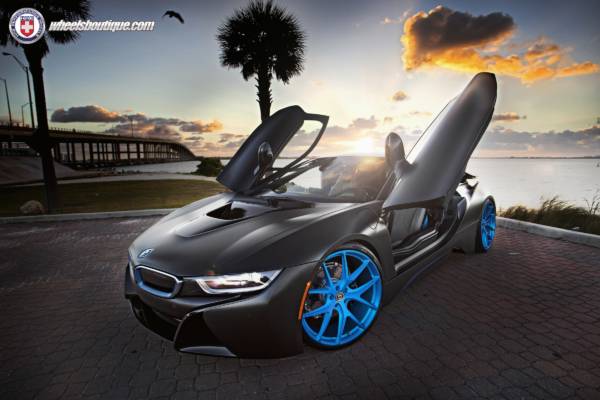 The BMW i8 marks a new era for sports cars, with its otherworldly looks and futuristic hybrid drive-train, powered by two engines – a 131 hp electric motor clubbed with a BMW TwinPower Turbo 1.5-litre three-cylinder petrol putting out 231 hp. Together, the two units deliver a total of 362 hp, endowing the i8 to dash from naught to 100 kph in just 4.4 seconds. On battery power alone, the i8 can achieve top speed of 120 km/h with a maximum range of 35 kilometres. The combination of battery powered engine with the petrol engine can take the e-powered super-car to up to 250 kph. 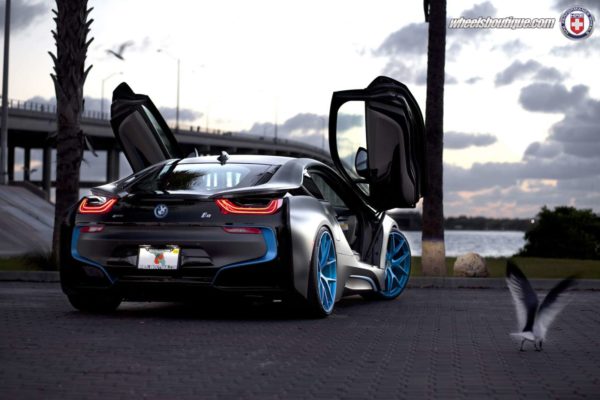 Nobody was complaining about the way it looks, but apparently, the owner of this particular i8 wanted to hot things up further. On came a stealth fighter like matte black wrap to accentuate the surfaces further, and a set of new, custom HRE  P101 rims, dressed in an original color that got a new name as well: “Frozen Blue”. The rim color compliments the blue trimmings on the i8’s grille, side skirts and rear well. Measuring 22×9 inches up front and 22×10.5 inches round the back, they are noticeably larger than the standard ones, but the car took them on with aplomb. Lowering springs were used to drop the car’s ride height marginally. And the end result just looks stunning! 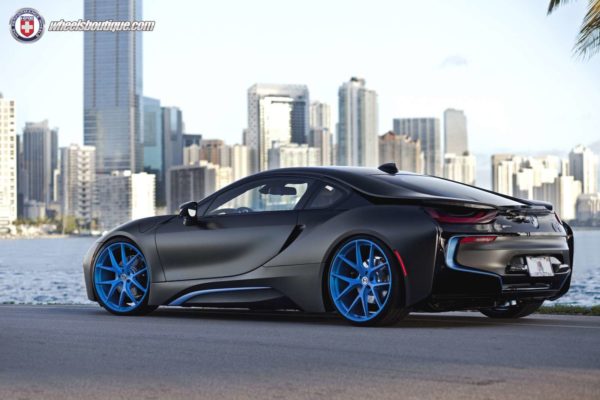 The BMW i8 will be launched in India next year as a CBU (Completely Built-up) unit and is expected to cost around INR 1.5 crores ex-showroom. The company will set up special iDealers in metrocities like Delhi, Mumbai and Chennai to retail its hybrid cars.