Anand Dharmaraj did what all of us dream of. He took five of the world’s best off-road machines to the Himalayas. Here’s a log of this rare adventure

Organizing motorcycle road trips for friends always seems so easy, but organizing the same for customers requires a completely different visor. So I learned! Hoping that the words which follow are able to capture the spirit of our exciting voyage through the mightiest mountain passes in the country. 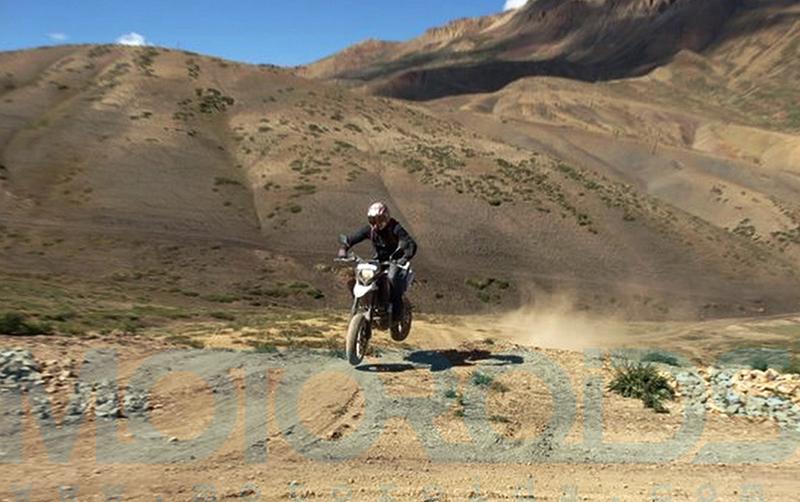 The terrain demands a lot from the rider and the bike

The machines, back up vehicles, support crew and the riders had arrived as per schedule at The Peterhoff in Shimla. With some last minute checks and fuel top ups, all the riders stepped outdoors into the crisp morning air of Shimla.The plan for Day One was to reach Rampur. We were expecting easy, great and beautiful roads. Little did we know what lay in store ahead! We decided to take a slightly longer scenic route to avoid the chaos of typical Indian hill station. 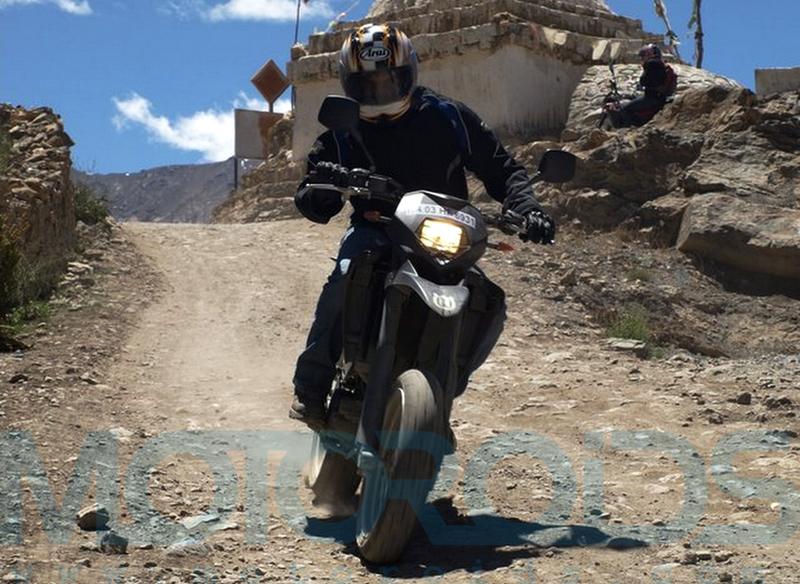 This meant more kms, but less traffic and more twisties. Reality hits us hard though as soon as we hit the twisties. Smooth tarmac greeted us; but slick rain washed mud on a smooth tarmac doesn’t quite make for “safe” riding. As we climbed towards Kufri (another “hill station” that’s been bastardized for tourism) rain, fog and broken tarmac made the riding slow and painful. I could feel the group burning that thought on the back of my helmet. 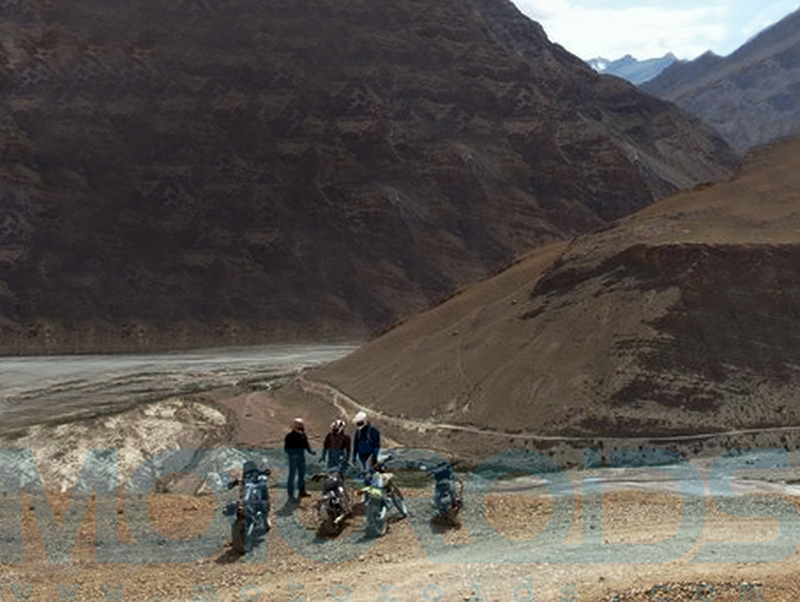 Soaked to the bones in spite of fancy gear, we stopped for lunch at Narkhanda at 4pm which somewhat warmed our souls. But soon enough, we were out again to be hugged by more rains, broken roads and yet more 80kms to clock in before our pit stop. Much to everyone’s relief the day ended at 6:30pm with bikes parked in front of a hotel, hot cuppa chai and comfy rooms. Day 2 started on a much better note with clear weather. We left Rampur and headed towards the Indian border in East Himachal to arrive at Sangla Valley for the night halt. 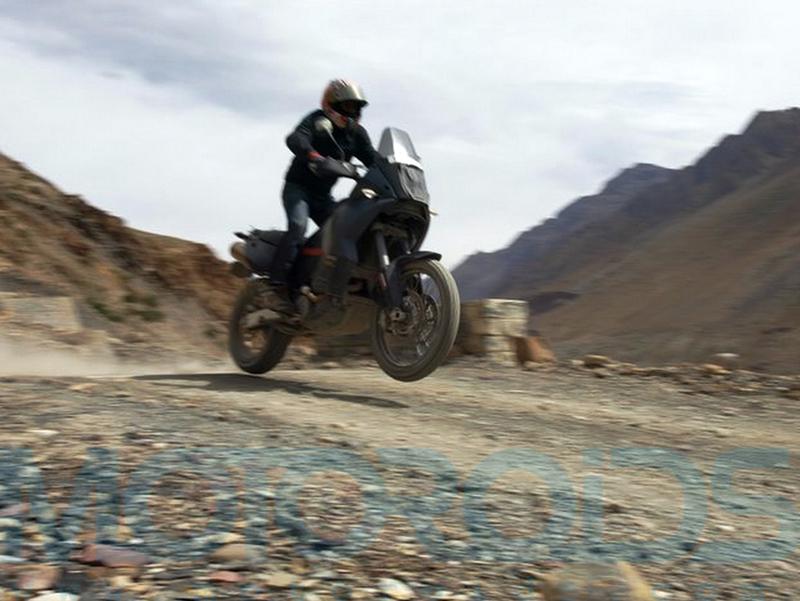 The KTM 990 Adventure kicks some serious dirt. However this is not the model Bajaj will get for you

We had a brief stop at Sarahan to visit the 800 year old Bhimkali Temple which is surrounded by legends & stories of Goddess and vanquished demons. Making our way through the twisted roads that had been carved out of rocky mountain faces and riding along the might Sutlej River, the Day Two ended at one of the most serene settings in the Sangla Valley. Luxury tents set by the riverbed, barbeque and campfire put us to rest under the stars. 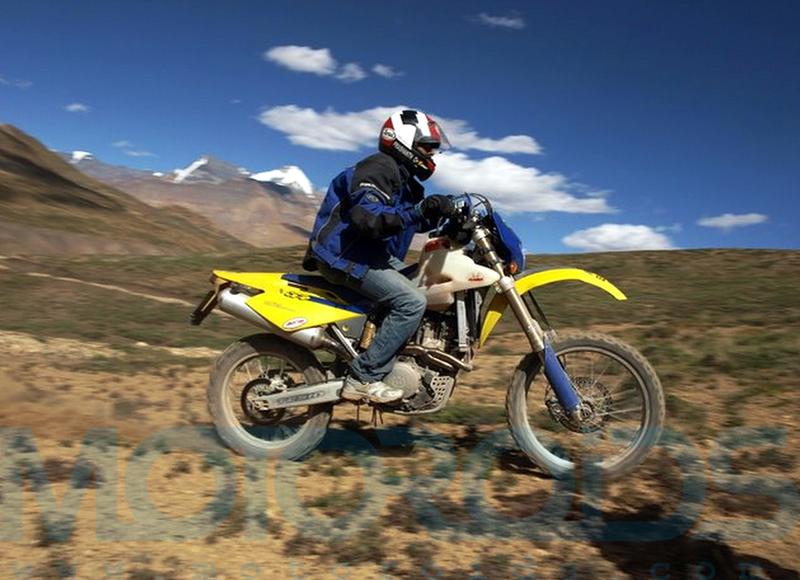 The author of this write-up, Anand Dharmaraj, astride a Husqvarna TE510

We head out the following day towards Chitkul, the last village on the Indian border. Breathtaking views of mountains, steep ascents into nothingness, water falls cascading off the face of mountain slopes, unveiled past us. As soon as wet met the tarmac, we sped through to hit Rekong Peo and then to Kalpa. 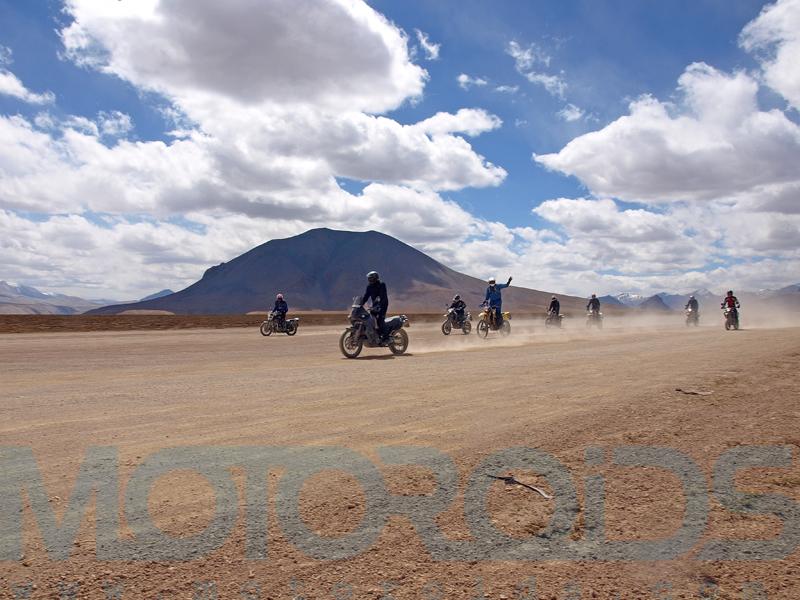 ‘More Plains’ is a mystical world in itself. You have to ride there to experience the magic

Our stay at Kalpa was at the beautiful Kinnaur Kalpa run by HPTDC and the views were more than enough to quench the thirst of any traveler. We had the evening to ourselves and the trip down to the village market highly held my interest. Old slate houses with wooden roofs piled with hemp stems, acting as insulation to keep the cold out, doorways that you would have to crouch into, a gushing stream of water right through the village gulley and the “chital”, a delicacy made from the local grain that is shaped like a diamond and only grows in this part of the world. All this and the views from the village made the evening a peaceful one and left me longing to stay on. 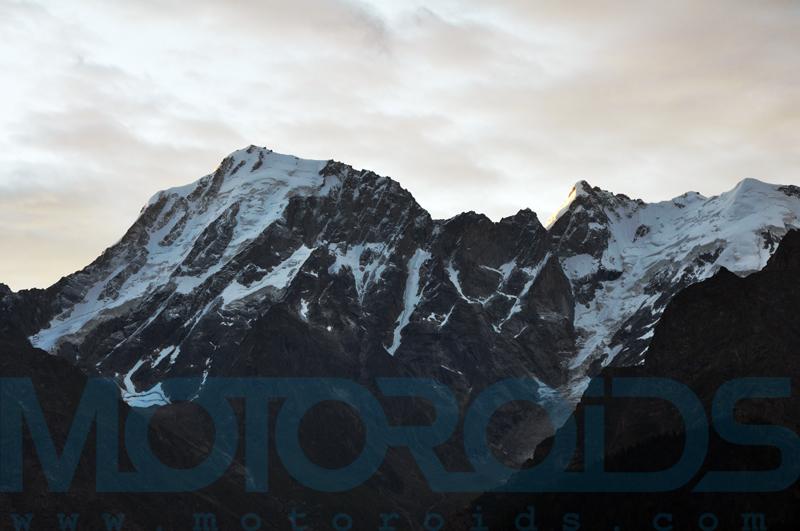 No matter what season, the Himalayas will always look stunning

240kms to reach to Kaza in the next three nights called for an early morning start. The long stretches of gravel filled twisty roads made the ride a mini paris-dakkar run. The confluence of Spiti and Sutlej rivers at Khab, one dirty white from the molten snow and the other brownish red from the silt made for a quick photo-op. The winding ascent of roads led us to a quick stop at Nako Monastery and Tabo Monastery (both over a 1000 years old) and the final leg of the ride to Kaza was uneventfully magical.  Kaza, standing at 12,500ft is a small village-town that is cut off from the rest of the world for the better part of the year and has plenty to offer for the “soul”. Villages, century old Monasteries, the Spiti River dividing mountains and dwarfing them, the call of the wind and the glisten of the sun kissing the snow and ice were just few of them. 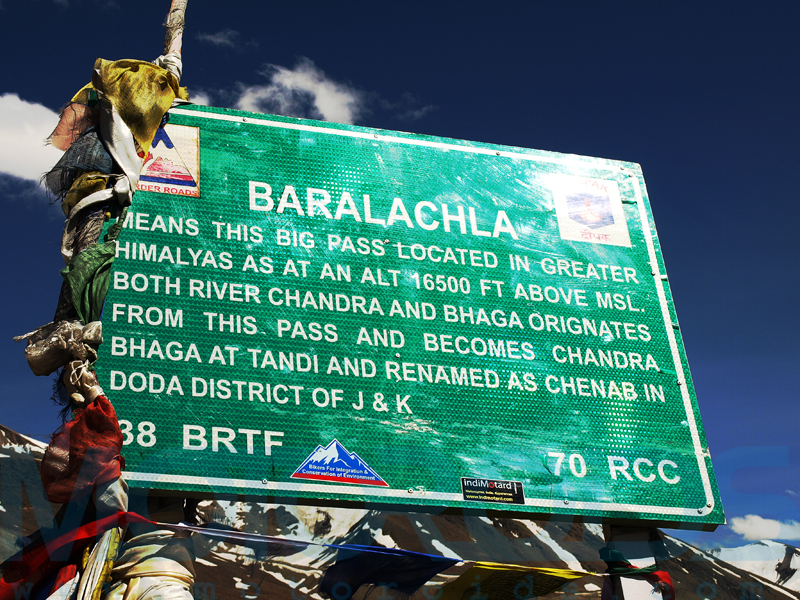 For your general knowledge….

The following two days were spent with day trips to Kee Monastery, Kibber the highest road connected village in Asia (14,500feet), Tashiganj for a sighting of the blue sheep and a trip to Dhankar monastery. Sadly, no blue sheep was sighted. The toughest two days of riding were yet to come. The ride to the sacred Chandertal (12000ft) lake from Kaza through the treacherous Kunzum Pass, awaited us. I knew that in spite of all the briefing the ride wasn’t going to an easy one. Roads were non existent and the last 13kms to Chandertal was tough to say the least. Rough sharp jagged edges of rock, fine silt & river crossings left everyone bushed. 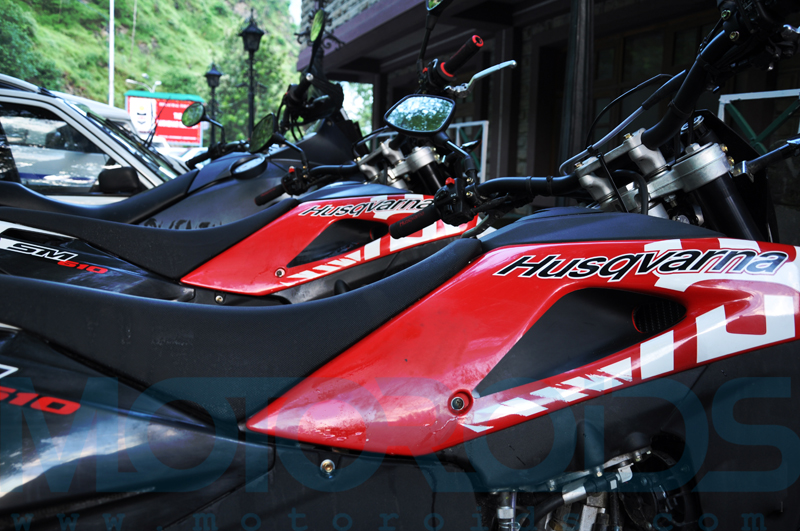 To top it all the access to the lake itself had been cut off for environment reasons and we had to trudge our luggage to the campsite by the lake. The freezing cold night under the stars was probably enjoyed by only some. The next morning ride through Batal, Chathru Bridge and Gramphoo was pure torture. 90kms of gravel on a river bed isn’t exactly every riders dream. Having done this stretch at the pace of a rally, I had not realized how bad the roads really were. The slower pace contributed to the pain followed by “when is this going to end?” The night halt at Bamboo Huts at Tandi was a welcome change for the whole group. 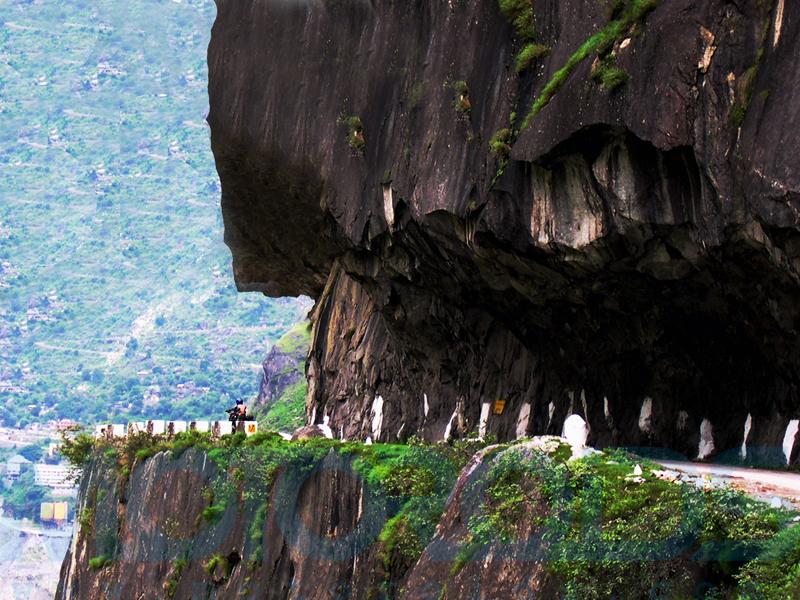 You don’t see such well-carved roads everyday, do you?

We still had 365kms to Leh to go and our next stop was Sarchu for the night. Good roads, chai stops and photo-ops at Suraj-Tal, Nakeela pass and Barlachla (16500feet) made for an excellent ride. Tents, chai, dinner and the cold put everyone at rest. Our last leg of the journey from Sarchu to Leh awaited us. But what started off an easy ride turned into a tough one. “More plains” with its vastness captured everyone’s imagination and the ride through Tang-lang-la was probably the most brutal, given the state of the roads and the urgency to cross the pass without running into trouble or rough weather. 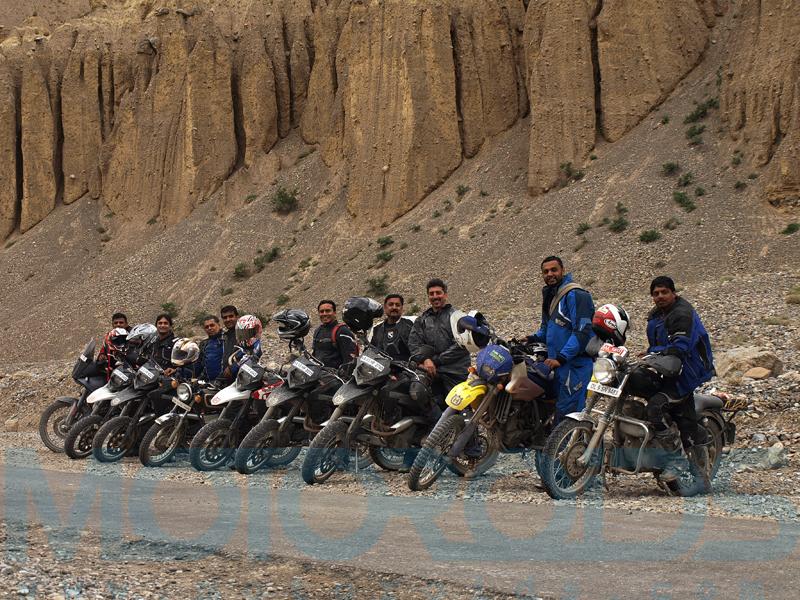 The brave riders pose alongside their wonderful steeds

The torturous climb to the second highest pass in the world at 17500ft was grueling on the body in spite of the upside down forks and long travel suspension. The ride down was through series of bends that were slick with fine silt. Apart from a flat tire on one of the bikes, the whole group was relieved as we hit tarmac at Upse and even more relieved when the eyes met civilization at Leh.

The ceremonial ride to Khardung-la top at 18380ft and photo-op was brief and memorable. Leh was a cause for celebration for all and as the group departed in the next few days. Some of us stayed back to enjoy the sights and sounds of Leh and to attend the four day music festival (Confluence 09) on the banks of the Indus River. Even though the majority of the line-up didn’t show up, we still had our hippie wood-stock moment under the sun, moon and the stars. We wrapped up and I found my way to Bangalore after almost a month and that’s when it hit me- Low Altitude Sickness.

You, the biker! If you have a wacky travel story of your own, mail it to us at