What do you do when your chest hair doesn’t grow much even after you’ve built three motorcycles in your backyard, powered by Ferrari sourced V6 and V8 engines!? When the modesty of your muscle fibers matches your humility, even after you’ve supercharged one of those V6 motors!? 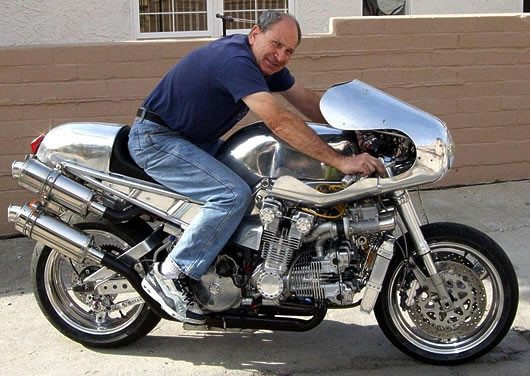 When you win yourself a trophy for a podium finish at the Isle of Man TT in your first ever outing, yet choose to trade it for a Maranello V8 that will power your yard built motorcycle!? What do you do? Well if you are Andreas Georgeades, you take two Honda CBX 1050’s 6-cylinder engines, weld them together, and build your very own 2.0 liter V12 Honda CBX! 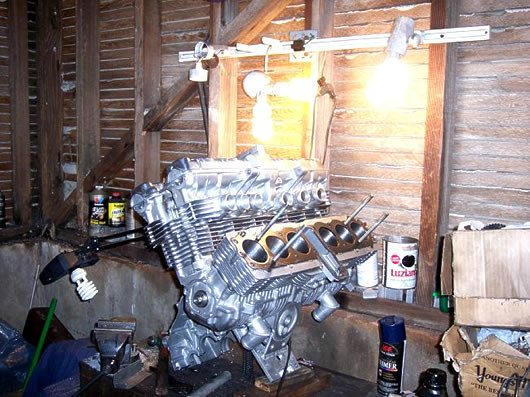 The crazy part is, Andreas builds all these machines in his backyard, without any assistance from things like CAD or even a computer. Relying mostly on his sketches, for this V12 build, the front end was derived from a ’98 Yamaha YZF, the rear wheel and brakes were sourced from a Suzuki and the transmission is from a Honda CBX, which is also shared with the Ferrari V8 build. All 12 intake manifolds are fueled by three Weber carburetors and the exhaust is a 12 into 4 system capped with modified Yoshimura cans.

The 6-cylinder Honda CBX 1050 on its own is still considered as one of the best sounding motorcycles ever made and Andreas’ build amplifies that melody by two. Keep your diapers handy, your spare pants ready, and just listen to the roar of this machine as he fires it up and makes the richter scale wiggle. Still loathing the death of V12? Go build your own if you like.