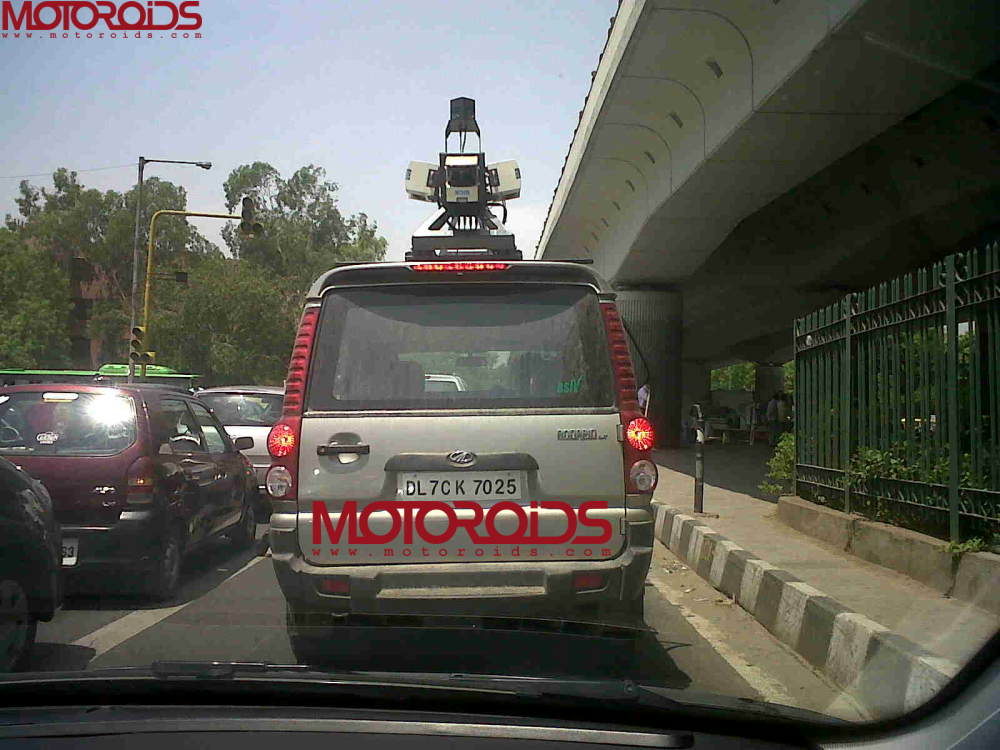 For the uninitiated, Google is taking pictures of every street in the world, and let you wander around in any street of the world from your PC. While we thank god that the global software major has not entered our houses with its cameras yet, it seems it has entered our country with its Street View camera.

Our MotoRep for Delhi, Dhairya Gupta very recently spotted this Mahindra Scorpio SUV with a camera mounted on the top of its roof. The camera looks peculiarly similar to the other Google camera cars spotted across the world, and hints at the fact the company has started mapping the streets of India for its street view. Further evidence of such cars wandering around in India comes from another of our MotoRep, Chaitanya Vedak, from Pune, who also witnessed a similar vehicle and managed to take some pictures too.

While we cannot be entirely sure that this car belonged to Google, as there were no logos on the vehicle, we don’t see any other company making an endeavour to carry out the exercise. Another thought expressed by some of our members is that it may be a car belonging to one of the navigation device companies such as MapMyIndia. However, companies like mapMyIndia use GPS coordinates to define the paths for their navigation systems, and don’t require taking pictures of the streets.

From what Dhairya tells us, the car had a cable connected to its rear right wheel. A cable went inside the cabin through one of the windows. There were to people in the car including the driver.

Google has a huge fleet of these cars in US. Equipped with cameras which take pictures of any location from nine different angles, these cars provide Google with images which are later stitched to create a 360 degree view of any given place.

Google on 26th May 2011 announced that it will begin imagery collection in Bangalore for the Street View feature in Google Maps. Google cars and trikes will today begin driving and taking street level photographs of public locations around the city. The images will be made available at a later date in Street View on Google Maps. However, ots strange to have witnessed the car first in Delhi

Street View is a popular feature of Google Maps, already available in more than 27 countries. It allows users to virtually explore and navigate a neighborhood through panoramic street-level images. It is also available on Google Maps for mobile.

It’s great to see the Google car doing the rounds in the country as once they are done you could digitally walk through every street in India, somewhat like this.