Home Features Auto-rickshaws of Mumbai – A blessing or a curse?

For many Mumbaikars, the rickshaw is as important as taking the next breath of polluted air into our lungs. Or in the case of youngsters, as vital as taking a selfie on their smartphones. It’s an answer to a question that has plagued many developing nations across the globe; Is there an affordable, yet safe way of going from a certain point A to a certain point B? As it turns out, yes there is! Well, in Mumbai, at least. The vast majority of this article is going to be focused on our experiences with these funny looking things on a day-to-day basis, with some ranting of our own thrown in, just for some good measure.

So, what is an Auto-Rickshaw? 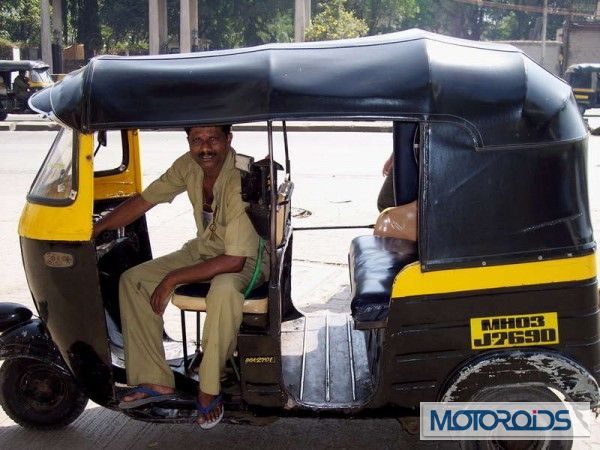 This is what Wikipedia has to say about it, “An auto rickshaw is a usually three-wheeled cabin cycle for private use and as a vehicle for hire. It is a motorized version of the traditional pulled rickshaw or cycle rickshaw.” Well, most of us know/call it as a auto or rickshaw. A mode of transportation that is readily available (theoretically, we will explain why’s that later) and is private enough, while at the same time, being part of Mumbai’s generic public-transportation system.

Now, most people aren’t aware of the different models of rickshaws that ply our roads. And rightfully so, we don’t care much about them. It’s suffice to say that there are at least four different manufacturers that make rickshaws; Bajaj, Piaggio, Force Motors and TVS. The Bajaj ones are the most common, followed by the others. In this article, we will only be concerned with the Bajaj ones, as this ain’t a rickshaw review article and/or we couldn’t be bothered with the rest. Maybe one day. Someday. 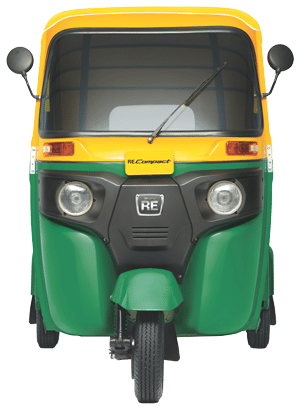 The Bajaj Compact 4S has no connections to the iPhone 4S. 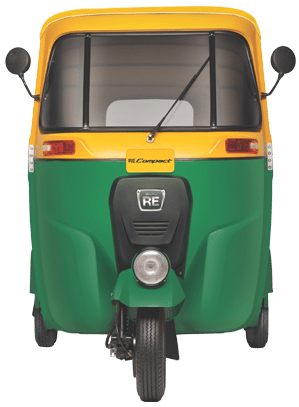 As we know by now, more power, means more speed. The Compact 4S is the more powerful of the two Bajaj rickshaws, here. And it will certainly reward you when you say “Arre bhaiyya, thoda jaldi chalao.” Of course, only if the driver doesn’t mind fulfilling your request for speed. Now, before we go any further, we would like to make a confession. Some of us on the Motoroids team had little clue what powered these tricycles with a hat for a roof. We presumed all along that there were some minions running somewhere in the helms of this thing and that’s what made it go. But, for all our viewers who are interested, we are glad to say that this thing on three wheels actually runs on an internal combustion engine. 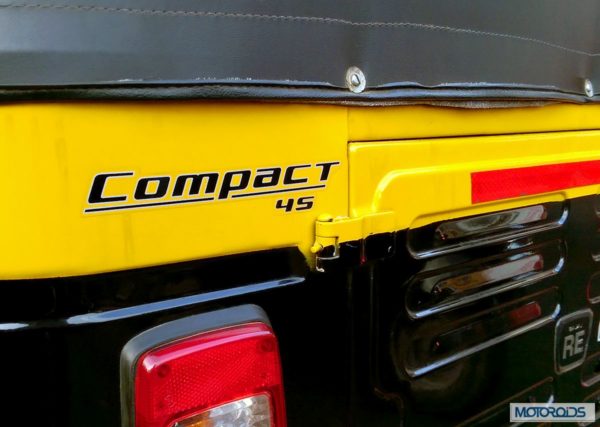 The Compact 4S, for example, has a 199cc single-cylinder 4-stroke engine that incorporates Bajaj’s famed DTS-i (Digital Twin-spark Ignition) technology that they use on some of their motorbikes. This motor use either petrol or CNG as fuel and usually, both. This means the driver can switch between one type of fuel to the other with the flip of a switch. The motor produces close to 12 bhp and 16.7 Nm of torque for the petrol variant, and 10 bhp and 13.6 Nm of torque for the CNG version. The ‘4S’ weighs just under 400 kg (depending on the fuel-type) and has a 4-speed transmission with 1 reverse gear. This reverse gear is activated by pulling a lever that’s placed on the floor and driver pushes it back down after the reversing maneuver. Or, he may as well push the thing back with his legs, the ‘Flintstones’ style. 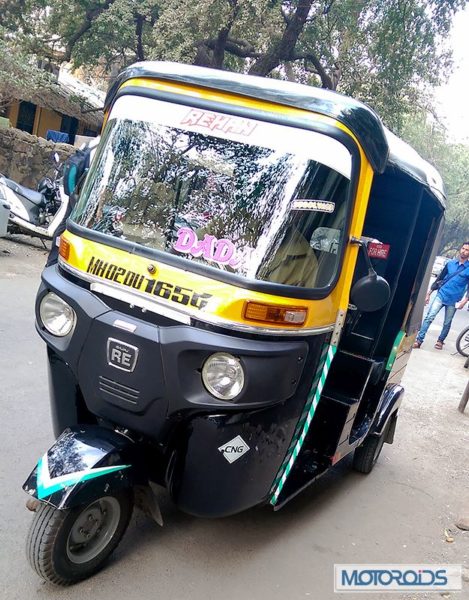 The Compact, on the other hand, is a 2-stroke rickshaw that makes less power and also looks more ugly. This should be your choice if you don’t plan on using the highways and don’t have to go anywhere with an uphill gradient. The petrol Compact makes just under 9 bhp and 15.5 Nm of torque from its tiny 145cc single-cylinder motor. The CNG variant makes even less power, so we decided that we would rather not mention it here. This rickshaw also weighs less than its elder, more ‘powerful’ sibling. If you hear a rickshaw making a lot of ruckus, sounding like a fruit-blender, this is the culprit. The 4-stroke ones tend to be a lot quieter and, slightly less ugly. Also, the suspension on the 4S tends to absorb those bumps and craters on our roads a bit better. 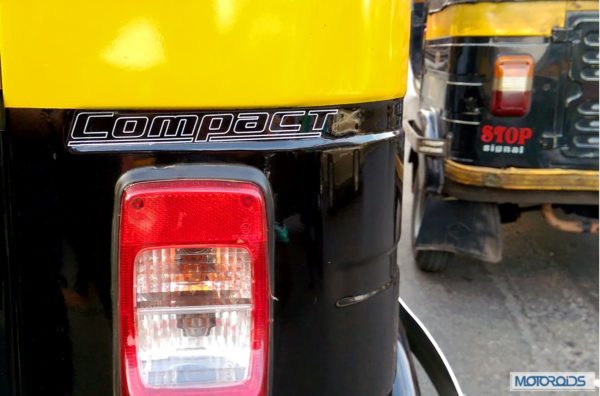 The 2-stroke variant, the Compact. In the background you can see its predecessor.

Why do we like/prefer rickshaws over other means of public transport? 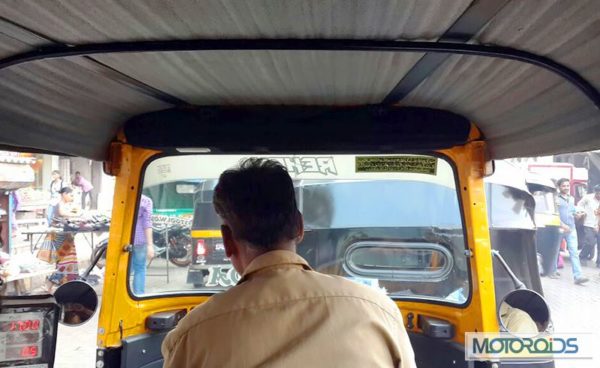 Sit back and relax, as he does the chore of driving.

It’s quite simple, really. There are a lot more rickshaws on the road than those big ugly red buses and although the train is a practical choice for long distance travel within the city, it’s hopelessly crowded during peak office hours and you can’t get one whenever and from wherever you please. The bus, on the other hand, is also not a very practical and comfortable (remember those bouncy back seats?) option as it too gets really crowded and it doesn’t exactly go anywhere fast enough. If you stay somewhere in Old Bombay, you have the option of travelling by a taxi, a rickshaw’s car equivalent. In Mumbai, rickshaws aren’t allowed to ply everywhere and hence, a taxi becomes your next best option. 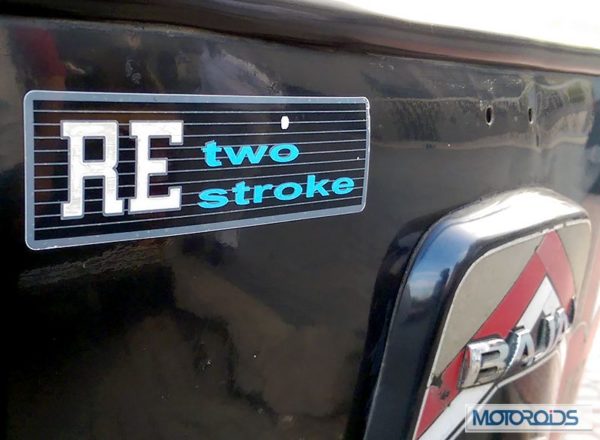 An older-gen 2-stroke rickshaw. These are slow and their ride quality sucks!

Rickshaws have more advantages over their other public-transport counterparts. Firstly, since there are so many of them on our roads, you could be anywhere in suburban Mumbai and hire a rickshaw for your destination. Of course, considering that your destination is within the suburban limits of Mumbai. The other positive of a rickshaw is the sheer comfort that it offers over other modes of public transportation. Of course, when we say comfort, we mean it in a very relative sense. And the best reason to choose a rickshaw is, safety. Now, before you draw a straight face at us, let us explain ourselves here, first. By safety, what we mean is that you could be carrying some precious valuables with you, and chances are, that those precious valuables won’t be very safe in a crowded bus or a train. We all have heard of or know someone who has their wallet, phone, watch or something similar, stolen or nicked in a crowded bus or a train. That, in most probability, won’t happen when you travel by rickshaw. Also, you can choose where and how you get to your destination and don’t have to worry about others, which, you can’t do when on a bus. And unlike a train, which has a schedule to keep, you can ask the rickshaw driver to pull over to the side of the road if you feel like buying some snack along your way. 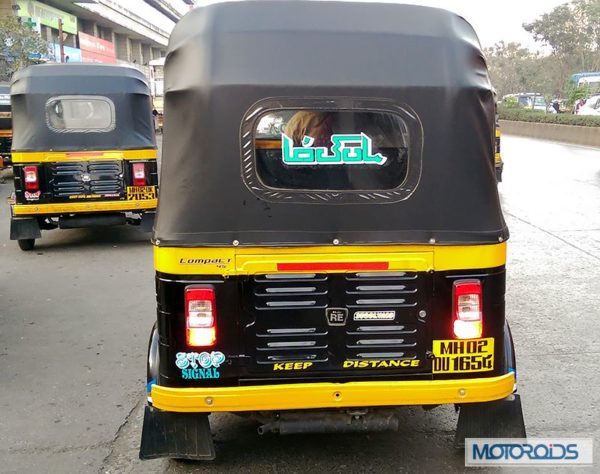 Now that we have mentioned some advantages of the three-wheeled ‘scooter’, let’s get on with the negatives.

Why are rickshaws not that great? 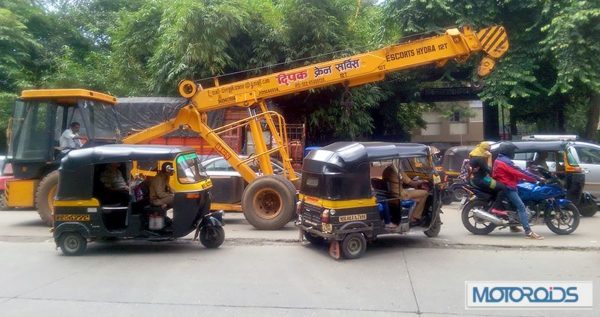 If you own a car, these guys can be very annoying as they always try cutting through traffic.

Okay, let’s get one thing straight from the start, rickshaws aren’t the prettiest things on our roads. In fact, we think that if all the rickshaws got replaced by a Nano (sorry Tata Nano owners), our roads would be so much better looking and our air would be a lot less polluted. It’s not uncommon to see these things belching out harmful and disgusting smoke from their tailpipes. Yes, most of the rickshaws now use CNG as their fuel, but there are still some out there (usually the older ones) that aren’t carrying a legitimate PUC (Pollution Under Control) certificate. That’s because they would never clear the PUC test, to begin with. 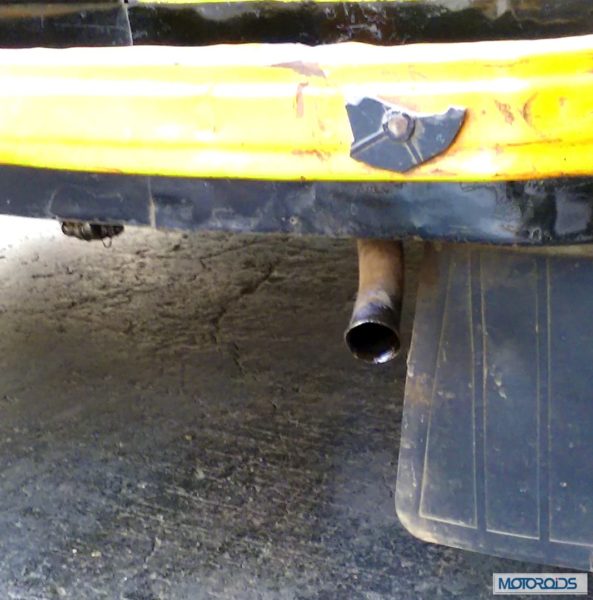 This older rickshaw is clearly belching out toxic fumes. Those thin pipes are a giveaway that it’s a 2-stroke.

Then there is the matter of safety. Yes, we did earlier mention that rickshaws are a safer bet when compared to a bus or a train if you are carrying any valuables. But, what we didn’t mention there is how appalling and terribly unsafe these things are as a vehicle. Their tricycle configuration, with one wheel at the front and the driven wheels at the rear, makes the whole vehicle extremely unsafe around the bends. Forget the bends, the thing’s stability at any speed above 40 km/h is questionable. Then there are the brakes, which are drums and not discs. You’d probably break the brake pedal if you push it hard enough. And we aren’t even kidding about this one, we have driven a rickshaw, just about. Yes, it was a lot of fun, but we soon realised that the whole thing wasn’t exactly going to be safe if we met with an accident. Of course, you could argue that there hasn’t been enough times when you have actually seen a rickshaw involved in a serious accident. But, trust us when we say that you wouldn’t want to be in this thing if it is about to hit anything other than a two-wheeler. Or, a wall made out of bubble-wrap. 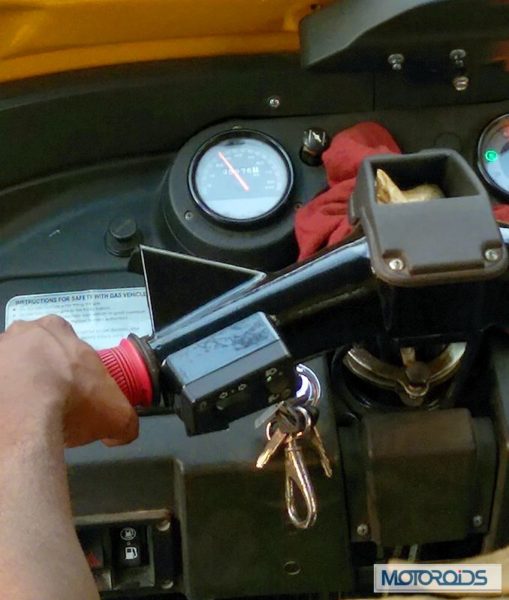 Doing any kind of speeds over 40 km/h can be hazardous. 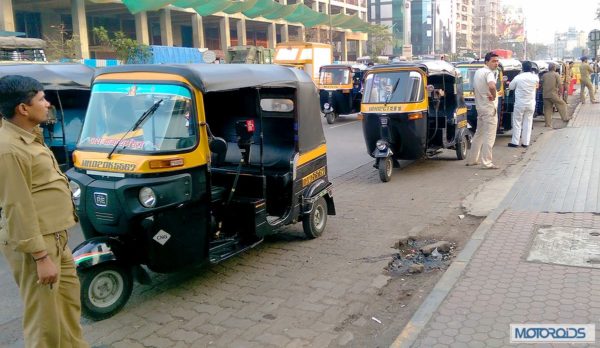 They stand there waiting, but not for you. Perhaps it’s an exercise for them. Idiots!

Then we get to the elephant in the room, the cost. Most of us know by now, that hiring a rickshaw could end up being a very expensive way of transporting yourself from A to B. The base fare in Mumbai is Rs. 17. And that figure can quickly escalate and leave you penniless on the side of the road, in the worst-case scenario. But, we could not look past one other major drawback of the rickshaw and choosing to travel by it. And that is the person who drives it, the driver. Most of us have experienced times when you think you will make it on-time for a important meeting and you miss it! Why? Because you couldn’t hire a rickshaw in time to get you to your destination. We even know of people who actually offer a prayer before they set out to hire a rickshaw, in the hopes that the driver wouldn’t deny to take them as a remunerating passenger. Some of us even thank the driver if he ‘agrees’ to take us to our destination. 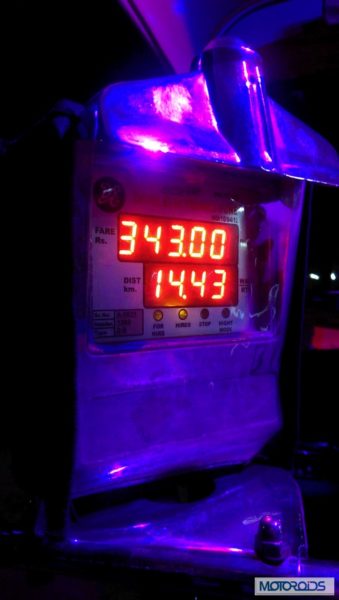 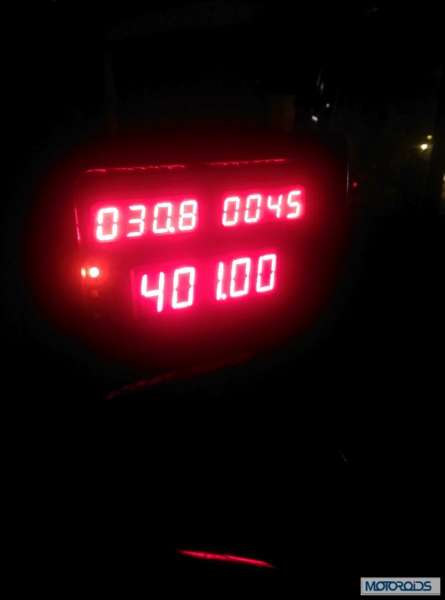 Rickshaws are expensive if you become liberal with your journeys in them. 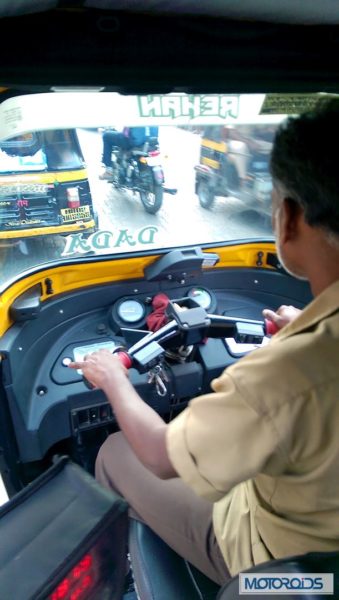 At the controls of his Compact 4S with over 10 bhp on tap.

The auto-rickshaw is an invaluable mode of transportation for Mumbaikars. Most of us couldn’t possibly envision being somewhere without this funny thing scuttling about our city. It’s a complicated relationship between love and hate for most of us when asked about our feelings for the rickshaw. Is it then a blessing? For a majority of us, yes! We, at Motoroids, know of quite a few individuals who’s primary mode of transportation in Mumbai, is the auto-rickshaw. And you can always quip to your friends that you travelled in a vehicle which has its engine at the rear and is rear-wheel driven. 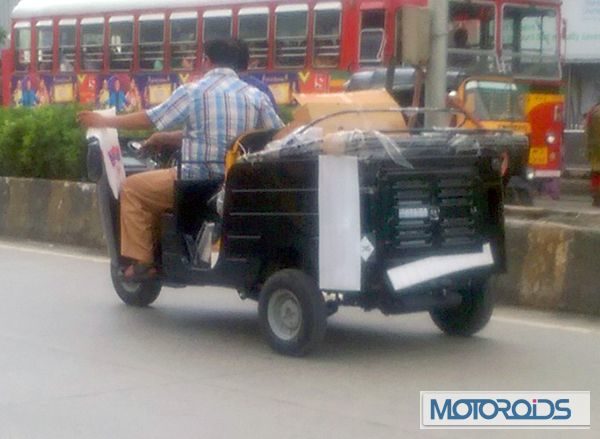 That’s a brand new rickshaw which still needs some assembly for the roof. Doesn’t it look like a big scooter?

That said, we also know of many, who hate these on account of their costs and several other factors. A curse? Probably not, an annoyance? Possibly yes. Do let us know what you think about auto-rickshaws and leave your thoughts about this article on the comments section, below.