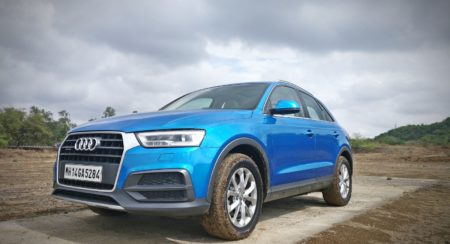 The Audi Q3 has been on sale in India Since 2012 and is one of Audi's best-selling cars in the country. The compact SUV is quite a handsome car with the rugged SUV stance and top-notch build quality. The car is quite capable off the road as well. With the latest update, Audi has reorganised and streamlined the variants on offer.

The Audi Q3 is a pretty smart looking SUV. The current Q3 which is sold in India has been in the market for quite a while and the design hasn't changed much since its launch in 2012 except for a few facelifts the car has remained pretty much the same. The has a timeless design and doesn't show its age at all. Most of the front fascia is dominated by the giant signature Audi grille and headlights which look rather beautiful. The roof slopes towards the rear and on the rear the car get all LED tail lamps with the dynamic swipe indicators and dual exhaust pipes to complete the package.

It's inside the cabin where the Audi Q3 loses out to its better-equipped competition. The current car misses out on a lot of "nice to have" features. The car gets a floating style infotainment system which feels pretty dated and misses out on android auto and apple carplay support. There is no USB port inside the cabin. The car gets keyless entry but misses out on push button start/stop. All that being said the quality and fit and finish of the cabin is top notch and on par with cars of the same segment. The car can seat 4 people in comfort, squeezing in a 5th passenger is not possible because of the huge transmission tunnel in the middle of the rear seat. The headroom is quite generous and the seats are extremely comfortable although taller passengers might find the leg room quite lacking. in terms of storage, it gets a decent number of cubbyholes and at 460l the boot feels just adequate.

Audi Q3 being a German SUV doesn't miss out on safety features. It gets a host of safety features like Anti-Lock Braking System(ABS), Electronic Brake Force Distribution(EBD), Electronic Stability Program(ESP), SRS Airbags, reverse parking camera and sensors. The Q3 also gets a torque vectoring system that constantly works the torque in all four wheels according to the necessity(if any wheel loses traction).

In terms of mileage, the petrol engine is rated for a company claimed figure of 16.9km/l and the diesel variants 30 TDI and 35TDI are rated for 18.51km/l and 15.17km/l respectively.