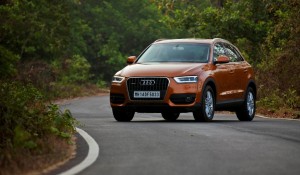 There is no denying that the entry level luxury car scene is fast heating up in India. Mercedes Benz recently launched the A Class and is close to launching the diesel variant of the B Class in India. BMW sells the X1 entry level luxury crossover in India and has tasted enough success. The third of the German trio, Audi, sells Q3 crossover in the same segment and has managed to leave a lasting impression in a short span of time. Joining the might Germans in near future will be Volvo, who will launch the V40 CrossCountry crossover in coming months.

With competition looking poised to increase in coming months, the boffins at Audi might be a tad worried. Nothing surprising as the Q3 is the current market leader in its segment and has been selling in great numbers. In a bid to prevent Q3 from slipping down the sales charts, Audi India might come up with a new entry level variant of the Q3. This variant will be powered by the diesel engine and will come in a front wheel drive layout. Also, the car will miss out on various high end gizmos. This entry level variant is expected to come to us via CKD route.

The Audi Q3 has a 2.0 TDI, FWD variant for international market. This variant has a max power of 140 Bhp and a peak torque of 320 Nm. The motor comes mated to a 6 speed manual transmission, instead of an auto ‘box, to keep the costs under check. However, the India spec entry level variant could use the same 7 speed dual clutch automatic gearbox that is available with Q3 in India.