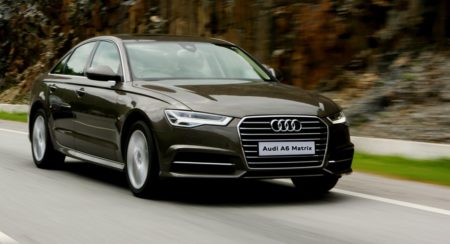 The Audi A6 is one of the most underrated cars currently available in India. In its current itteration, it comes with a set of all LED Matrix headlamps. The design of the car is pretty familiar with Audi traits all over the car. Overall the Audi A6 is a nice looking car

Audi A6 Exterior Design and Features

The A6 is a rather beautiful looking car from the German car manufacturer. The styling is very understated with some minor clever design touches making the car stand out like the all LED MAatrix headlamps, dynamic swipe indicators, straight strong lines on the bonnet and above the air vents and an aggressive front bumper. to complete the package the Audi A6 comes standard with 17 inch alloy wheels

Audi A6 Interior and Cabin Features

The cabin is where the A6 has started to show its age. The design feels dated compared to the competition but the quality of the materials is excellent and the touch-n-feel is superb. The car sports Audi's proprietary infotainment system with apple carplay and android auto compatibility. The current A6 doesn't have Audi's virtual cockpit system instead it comes with the older MID which gets the job done. The car also has 4 zone climate controls. Another nifty feature of the A6 is the passengers in the rear seat can control the front seat to increase legroom. In terms of storage, the A6 has a 430l boot which is on par with the competition

The A6 gets all the safety features one would expect from a car of this segment. The vehicle gets 6 airbags, ABS, Anti-Slip Regulation (ASR)for improved traction, active lane assist, Adaptive Cruise Control with Stop/Go functionality, Audi Pre Sense Plus, high-intensity discharge headlights, Active Lane Departure warning system, a rear and front parking camera to give a full 360-degree view of the vehicle while parking, and a low tire pressure warning system.

The Audi A6 comes with 2 power units on offer a 1.8l TSFI turbocharged 4 cylinder petrol engine churning out 190ps at 4200 RPM and 320NM of torque between 1400 to 4100 RPM and a 2.0l TDI 4 cylinder turbocharged diesel engine making 190ps at 3800RPM and 400NM between 1750RPM-3500RPM. Both engines come mated to a quick-shifting 7-speed S-Tronic automatic transmission in terms of efficiency the petrol engine is rated for a company claimed figure of 15.26KM/l and the diesel is rated for 16.66km/l