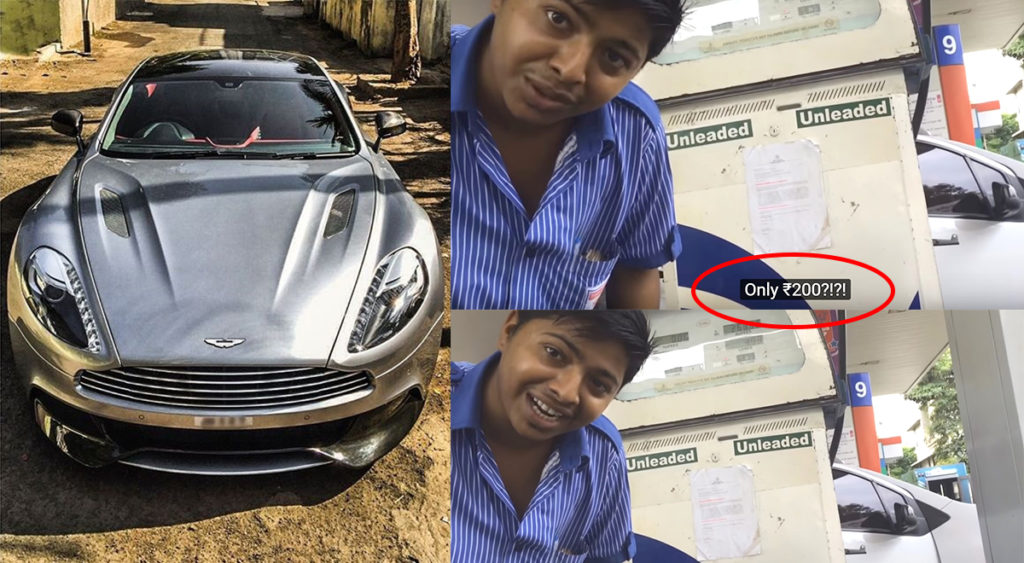 Life gives us lemons some times. I remember this one time when I was chilling behind the wheel of a MINI Cooper S, my spirits high as I was going out of town. As I approached the first toll booth, I realized, to my utter dismay, that I had forgotten my wallet back home. It was one of the most embarrassing U-turns I ever made. Something similar happened to these lads in Surat, when they went out for a spin in an Aston Martin Vanquish. They forgot their wallets back home, and were running out of fuel as an Aston drinks like a fish.

Now when you pull up to a petrol bunk in an exotic that costs the thick end of INR 3.8 Crores, the attendants expect nothing less than a tankful of the premium stuff. However, when this masterstroke of British engineering (and design) showed up, its occupants asked for just INR 200 worth of regular petrol to be filled up, as all they had lying around with them was chump change. The petrol bunk attendant’s reaction was priceless, leaving the owner a bit red-faced as he worked up an excuse that’s just about believable.

Now a word or two about the Aston Martin Vanquish. This particular example is one of just three units rolling on Indian soil. Its 6.0-litre, naturally aspirated V12 engine cranks up a formidable 568 bhp, making it the most powerful GT production engine in Aston Martin history. 0-100 kph is dispatched in 3.6 seconds, while a top speed of more than 320 kph makes it the fastest Aston Martin till date. Those numbers are still leisurely when compared to those dished out by an equivalent Ferrari or Lamborghini, but the Vanquish is more a GT (the ultimate one at that) and less of a super-car.