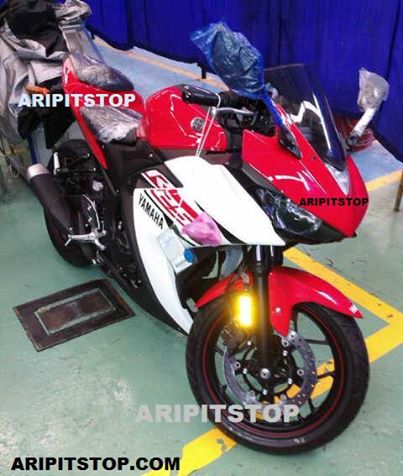 It seems like the ‘bike Gods’ are suddenly a bit too impressed with us bike aficionados! What else explains the sudden arrival of all these Yamaha R25 production model images? Not that we are complaining but these new  Yamaha R25 production model has surely got us overwhelmed with excitement. Seen in the lead image here is a pic of the highly anticipated bike’s front section, which does reveal some new things about the upcoming model. We’ve also attached here all the Yamaha R25 spy  images we have, because we know that you are as ‘pic-hungry’ as we are.

The Yamaha R25 would be powered by a parallel twin liquid cooled DOHC 250cc engine that is likely to have a max power of 34PS. Markets like that of India, which are cost sensitive in nature, could get a single cylinder 250cc version that would help the famous bike maker to price this upcoming product ultra competitively. Unlike the R15, the R25 will be built around a tubular frame.

And some more Yamaha R25 Images-