Volkswagen has introduced the Golf GTI Performance and a new electric e-Golf at the 2017 Frankfurt Motor Show. The GTI Performance has a 2.0-litre TSI turbocharged petrol powered engine which is now capable of producing 241.6hp, 14.8hp more than the previous version and 370Nm of torque. Living up to its reputation for being a hot-hatchback, the GTI Performance is capable of reaching 250km/h (electronically-limited) and from a standstill to 100km/h it takes 6.2 seconds making it one of the fastest accelerating hatchbacks in its segment.

The new Golf is equipped with two transmission options, a 6-speed manual and a 7-speed DSG. The GTI Performance has a 380-litre boot space which can be increased to 1270 litres, with the rear seats folded flat. The updated version now has Volkswagen’s Active Info Display as standard. This option has replaced the previous high-resolution TFT screen. Safety features like Automatic Post-Collision Braking and a Driver Alert function and some additional features like rain sensor, auto dimming IRVM are available in the GTI Performance. 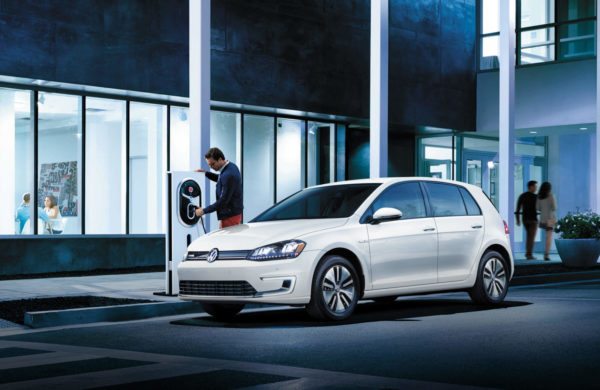 After the diesel-gate scandal, Volkswagen is turning no stones unturned to fix the dent. As Germany has made mandatory for all the manufacturers to turn electric by 2030, Volkswagen has decided to bring an updated version of its Electric Golf or e-Golf. The e-Golf now has 35.8 kWh of electrical output, up from 24.2 kWh. With great power comes greater torque, now rated at 290Nm. With a suitable increase in the size of the batteries, the range of the car is increased to 300km. While its petrol powered sibling can do a 0-100 sprint in 6.2 seconds, the e-Golf is capable of doing the same in 6.9 seconds. Interior is more or less the same. It is equipped with Volkswagen’s 9.2 inch Discover Pro navigation system with touch support, gesture control and voice control, Adaptive Cruise Control, Forward Collision Warning with Autonomous Emergency Braking and Pedestrian Monitoring, Lane Assist, Blind Spot Monitor with Rear Traffic Alert, Park Assist and Light Assist.. The e-Golf is priced at $31,315. A DC Fast Charging package is available for $995.