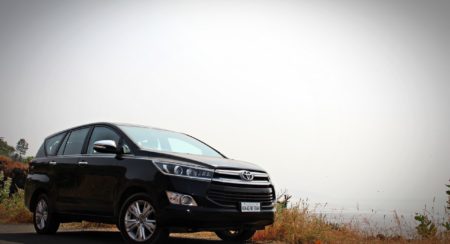 The Toyota Innova has been the highest selling car in its segment since it was launched in India. The current-gen Innova Crysta features evamped exterior styling and cabin. It is being offered with an automatic variant, a petrol engine and a sporty Touring Sport trim level too.

The Innova Crysta in its latest avatar gets an upright fascia with sweeping headlights (LEDs on higher trim levels) and a prominent grille which makes it look like a tough, yet, stylish MPV. At the rear, the taillights feature an interesting drop which adds a little bit of a boomerang effect. Compared to the previous-gen Innova, the current-gen model is also bigger in size and features some sharp styling details all around which makes it look upmarket and interesting. In terms of dimensions, the Innova Crysta is 4,735m long, 1,830m wide, 1,795m tall and has a wheelbase of 2,750m. The MPV has a turning radius of 5.4m and the Fuel tank can hold 55 litres at one go. Depending on engine choice and variant, the Crysta weighs between 1,730 kilos - 1,880 kilos (kerb weight).

The Cabin of the Innova has taken a major Leaps in terms of fit and finish form the previous generation car. The interior has been revamped with tasteful use of soft-touch material, faux aluminium and wood bits which gives the car a very premium and upmarket feel. In the centre of the dashboard sits the new touchscreen infotainment system which works in conjunction with the steering mounted controls. In terms of seating comfort, the Innova trumps all other cars in the segment. Top trim levels offer a powered driver seat

The second-row seats, especially on the 7 seater variants, are extremely comfortable and the 3rd row too is great for short to medium journeys for adults. Both the 2nd and 3rd row get an individual, roof mounted Air-con vents. Coming to storage, the Innova gets a spacious 300-litre boot with the 3rd seats in use and can be expanded be stowing away the 3rd row. The cabin features aircraft-style illumination in the roof area and the split-glovebox is cooled. Also, the Innova Crysta probably has the most number of bottle holders which have been specifically designed to hold most shapes and sizes of bottles available in our country.