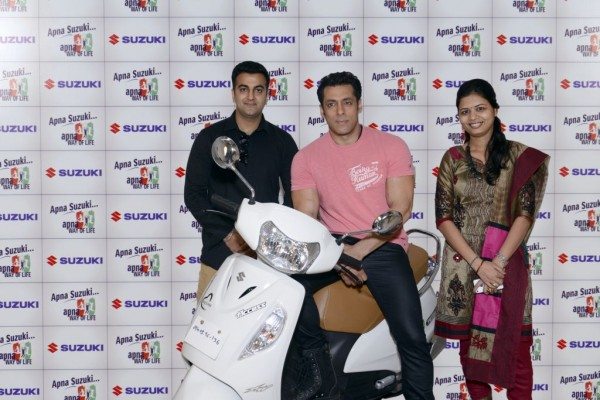 Lucky Gaur of Delhi and Pooja Shashikant Shahane of Pune realised their dream of meeting superstar Salman Khan after winning the grand prize in the Apna Way of Life contest organized by Suzuki Motorcycle India Limited (SMIL), a subsidiary of one of the world’s leading two-wheeler manufacturers.

The thrilled winners chatted with Salman Khan about the many celebrations that make Apna Way of Life in India while meeting him at the Mehboob Studio in Mumbai. The visibly delighted winners also showed Salman the winning photographs they had entered for the contest

The contest received an enthusiastic response from Suzuki two-wheeler customers who clocked more than 2000 successful entries. Of these, Suzuki selected 18 winners in 3 months out of which 2 grand winners were selected for meeting the superstar Salman Khan. 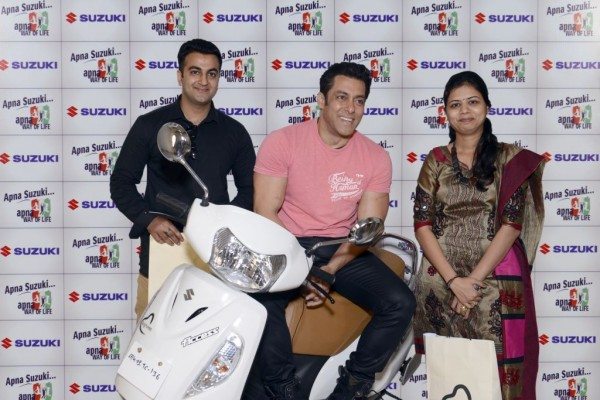 Mr. Atul Gupta, Executive Vice President, SMIL said, “Suzuki’s Apna Way of Life is about celebrating togetherness and the spirit of being one great Indian family. Our focus at Suzuki is the Indian customer and understanding his/her experiences. The ‘Apna Way of Life Contest’ offered insight into the customer’s thinking, lifestyle and feelings while also engaging our consumers to interact with us. I congratulate all the contest winners on behalf of Suzuki two wheelers. ”

Ms. Anu Anamika, National Head – Marketing, SMIL said, “The idea behind the contest was to create a platform for our customers wherein they could share their ways of life with us and celebrate this spirit of togetherness with their star-idol Salman Khan. We are extremely happy with the response.”

Actor Salman Khan said, “I am delighted to be a part of Suzuki’s Apna Way of Life Contest.  My Way of Life is about sharing happiness and celebrating the joys of life with my fans. The winners of the contest also enjoy the same sense of togetherness, family and fun as I do. I’m glad Suzuki created this opportunity for me to meet the winners and allow them to share their experiences with me.”