Home Modified Bikes Taste Gets Better With Age. The 43 Bobber By Eimor Customs Reflects Just That

Bringing you another creation of from Eimor customs, here is a Royal Enfield based bobber which shows us that simplicity and style go hand in hand. This Royal Enfield is customised to be a bobber without shouting out too loud. The brainchild of Eimor customs and their client Mr Srinivas, this bike was made according to the vision that Mr Srinivas had. Eimor customs tells us the client came to them with exactly what he wanted and images of other bikes this build was to be inspired from. After a discussion with the team of Eimor customs, the bike was conceived and named 43, for the owner Mr Srinivas turned 43 this year. 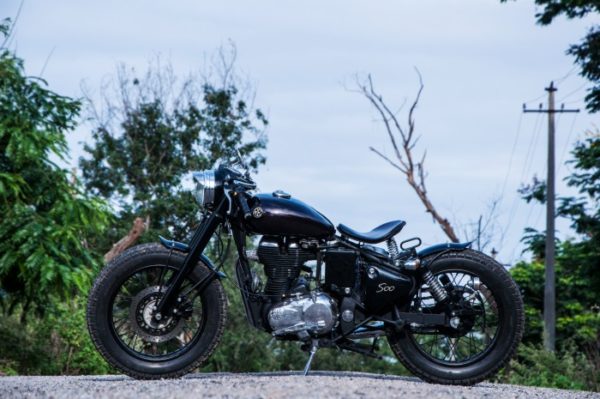 Coming to the bike, it follows a very minimalistic theme, no elements on the bike are made to scream at your face. The swingarm of the bike is extended by 4-inches to give it a nice stance and a better look. Gone are the skinny tyres the bike came with and in are new Moto C tyres from MRF wrapped in 18-inch spoked wheels at both ends. Up front, the team installed a clubman style handle with integrated blinkers to keep the front end neat. On the back you will see blacked out blinkers, the stop light and number plates are mounted on the side. It also has been fitted with a megaphone exhaust, enhancing the riding experience even more. 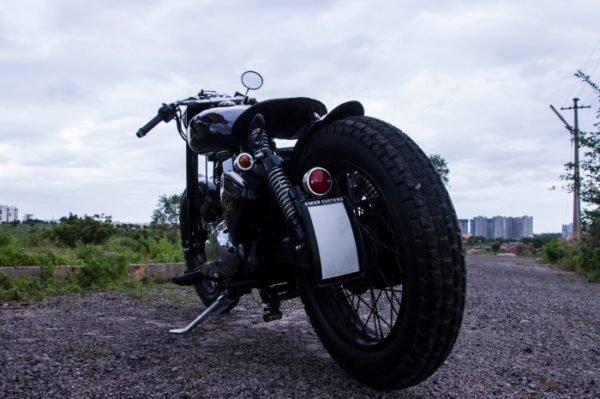 Also Read: This TVS RR 310 Gets a BMW HP4 Disguise

The fenders following the bobber theme are minimalistic and handcrafted pieces. The 43 gets a single seat, something which the owner was very clear about when he first walked in the shop. The seat is made of high-quality leather and also gets springs for added comfort. The bike has been painted black all around except for the fuel tank which is done in a very dark burgundy shade. The seat also has been dyed to match the colour of the tank. Finally, the tank gets a hand-painted RE insignia on both sides. What are your thoughts on this bike? Let us know in the comments below and do check out the image gallery of the 43 below.