Home Reviews What makes the Innova Crysta Special? We Try and Figure After a 1400 km drive

Innova, the bold people carrier that redefined the way we looked at MPVs. Back in the year 2005, it replaced the Qualis, its extremely popular forebear, raising many a brow. It exhibited to the Indian audience, as to what to expect from a seven-seater family car. For big families and for those with a taxi business, the Innova ticked all the right boxes by offering comfort, quality, reliability and space in spades. It sold, and sold in incredible numbers, despite being significantly more expensive and less fuel efficient than the pretenders who wished they could be its true competitors. It was a legend in its own right, and an incomparably tough act to follow.

Enter the Innova Crysta – the 2017 version of the people moving behemoth, which brought with it modern styling, more space, richer interiors, more equipment and brand new engine-tranny combos. And as they have always done it, they called it, well, expensive. On its part, the Innova did what it has done always – it thumbed its nose at the naysayers and went on to sell in great numbers.

So what really does make the Innova so special? How could an MUV, a segment with no glamour attached to it, manage to sell for more than double the price of its closest so-called competition? We drove this long legged machine for around 1400 km from Mumbai to Goa, and back through the picturesque Konkan during a hustled trip, and we think we somewhat figured the few things that really make the Innova Crysta special. Here’s our list

This is one aspect about a car which often gets lost in the limelight hogging skirmishes between stuff like engine specs, fuel efficiency, gimmicky features and the latest fad represented in three letters as DRLs. To make a car comfortable is much easier said than done. It’s a complex blend of the right chassis and suspension setup, a finely tuned position of the steering wheel, well researched ergonomic, well placed pedals and a well designed, well padded seat which offers generous amounts of support to your thighs, back and shoulders. 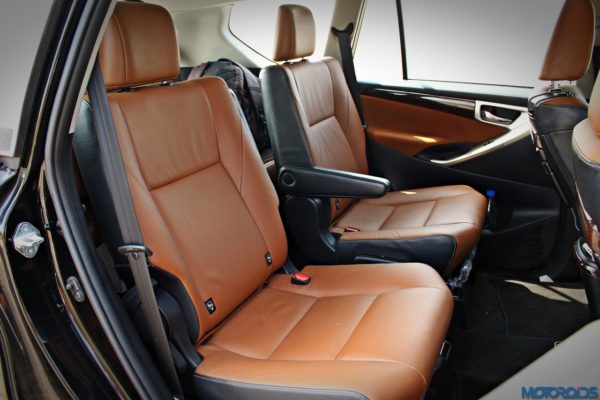 The Innova Crysta simply nails it in terms the comfort department. Be it the driving position, the eight way-adjustable driver’s seat, the view of the road ahead, the fine balance between ride quality and the solid road-holding or the sheer space that all five of the front two row occupants enjoy (even the second and third rows can be reclined) – the Innova is simply unrivalled when it comes to fatigue free driving. As mentioned above, we drove it for over 1400 km over a period of three days on varying terrains, and each one of the occupants had nothing but good things to say about the impeccable comfort it offers.

A great departure from the rather plain looking interior of its predecessor, the new Innova looks and feels rich, well equipped and very luxurious on the inside. An icing on the cake is the aircraft like illumination in the roof which makes the cabin feel extra special during the dark hours. 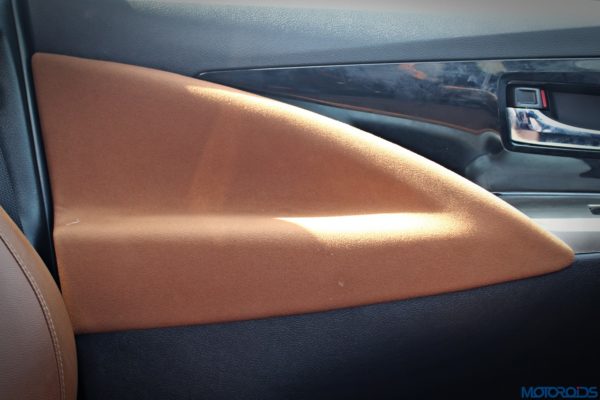 For the top of the line Z variants, you also get some really luxurious looking hazel brown leather on the seats and a hazel brown seat back table for the second row. The steering wheel, and dash also get hazel brown wood-finish trims. A really opulent touch is the brown colour suede leather on the door armrests. All of it looks pretty rich and makes the cabin of the Crysta feels really special

Punchy engine with a smooth, if a little slow auto transmission

The top of the line 2.8 diesel engine with 174 hp of power and 360 Nm of torque makes the Innova a punchy, capable cruiser even with seven passengers aboard and its generous 300 litre boot fully loaded with all three rows up. Sure, there are no fireworks here to put that childlike smile on your face, but then again, that’s not this machine’s brief. It’s a linear engine with plenty of torque to accelerate effortlessly in any gear, and to top it all, it has that creamy smoothness which makes driving it at speeds slightly above the ton mark a hassle free affair. 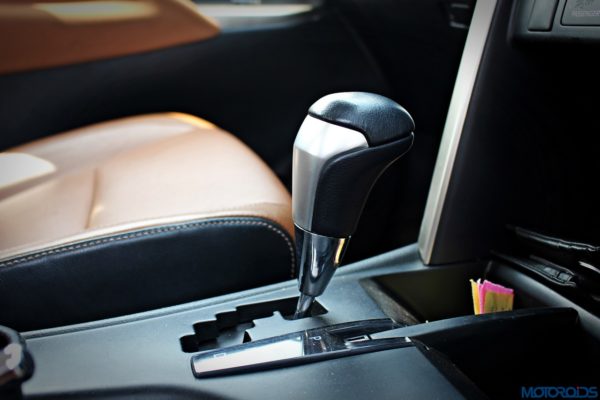 We wish the 6 speed auto transmission was quicker in how it responds to pedal mashes, but it works just fine with part throttle or feathering the toe over it. The important bit here is the shipload of torque available right from the bottom of the barrel and the silken manner in which it is delivered. Fully loaded or with just the driver, that engine feels properly capable and stress-free at all times. And guess what, that bit really helps making the Innova Crysta a fatigue-free driving machine over long distances. We wish the fuel efficiency was better as it delivers around 10 km to the litre, but as proven over time, the Innova buyer appreciates the punch it delivers as a trade-off, and doesn’t mind the relatively lower efficiency.

The Crysta, again, unlike its predecessor comes with a full load of comfort and convenience features which add value to the overall package and make it stand out among its much cheaper alternatives. It’s a long list, but the highlights include a powerful LED projector headlamp, and a TFT multi information display with a rich data set including but not limited to fuel consumption, ECO score, Navigation display, shift position indicator, Cruise Control Display and a whole array of information. 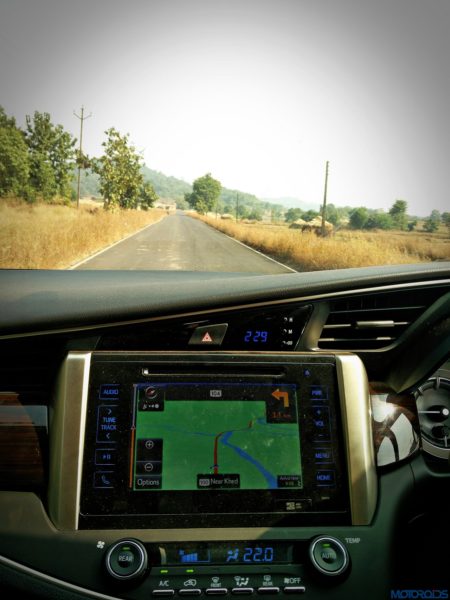 The car gets 7 airbags, vehicle stability control, hill hold control, rake and reach adjustable multifunction steering and a whole bunch of other features. It’s a quite a comprehensive package and makes life easy for the man behind the wheel as well as for all the remaining occupants.

Built to shame a tank

The Innova stood alone, way ahead of everything else when it came to sturdiness, reliability and ruggedness, and the Crysta only improves upon its legendary predecessor. You can feel the built-to-last quality in every bit bolted on to the Crysta. It drives quietly without any unwanted squeaks or rattles, and the way it rides like a solidly put together, coherent unit even with all 7 aboard over undulations at speed simply wipes out any doubts one may have about its capability to run without complaint till the end of the world. 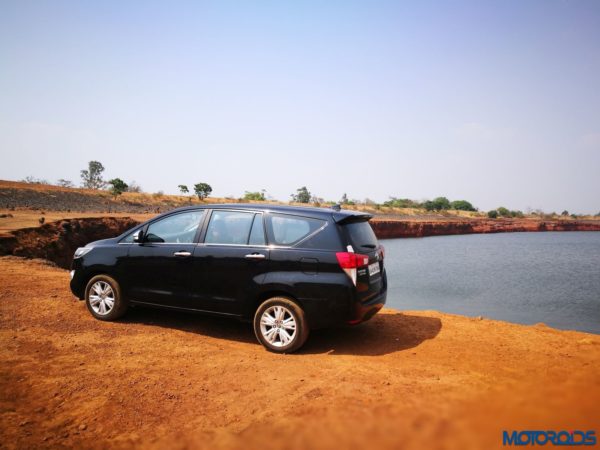 It’s simply the last word in reliability and sturdiness. You can’t probably quantify that quality, or maybe you indirectly can when taxi drivers show you an odo reading of over 400,000 kilometers with the engine not having been touched and running like new. The Innova is in a league of its own when it comes to tank-like build quality, and that’s probably the most important reason why so many people buy it without giving it a second thought despite its relatively steep price.

Did we miss out on something? Or does the Innova have some annoying vices that you don’t like?  Do share your thoughts with us.