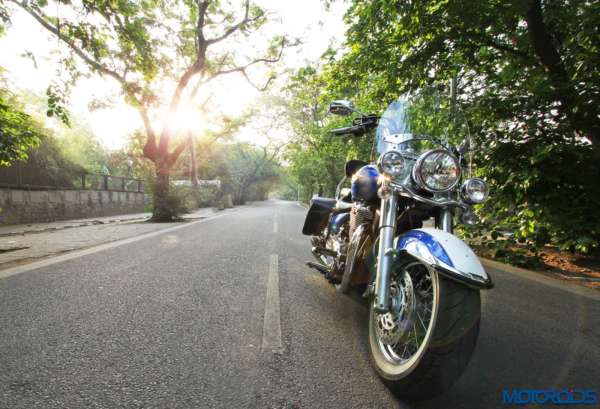 Cruisers, sitting on the diametrically opposite side of supersports category in the biking realm, lend themselves to the gracefully graying, retired gentlemen. The guys who fancy themselves on these machines are generally well traveled, and lay more emphasis on experiencing the journey than reaching the destination. They have made their money, so they are not in a hurry. And they have paid their taxes, so the government better have made some long tarmac roads for them.

The last Triumph motorcycle we tested was the very British Thruxton. That bike represents the biking culture of café racing which originated in Britain. Thunderbird, the cruiser, however, is a British kid with an American origin. Americans love wide, open, straight roads. Traversing the Western wilderness on an arrow straight highway with a distant din of country music is what American biking dreams are made of. 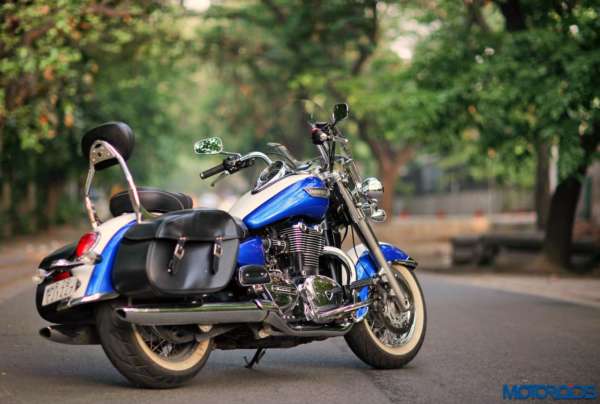 While the Indian bikers have always had a liking for the laid back REs, of late they have also developed a taste (and wallet) for bigger, more luxurious and more expensive cruisers. Harley Davidson has been a great success story in India, purely because of its cruiser range. Numerous Harleys riding around Indian metros every Sunday is a common sight nowadays. Triumph is also eyeing a share of the pie; which is a rather big pie, and the Thunderbird LT is the knife it plans to cut itself a slice with. So, can the British beat the Americans at their own game? Let’s find out.

“This thing is the two-wheeled equivalent of the Mammoth” was my first thought when I saw the Triumph Thunderbird LT for the first time at its launch in September last year. The sheer enormity of the machine is monumental. The fuel tank, the headlight cluster, footboards, seat, handlebar and the panniers make it look like something the Incredible Hulk would likely ride. Just paint it green and it would be ready to haul the burly, indestructible, mutated hero in the next installment of the Avengers series.

As we entered the Triumph’s Service Center in Gurgaon to pick the bike, it stood there smugly among a slew of other Triumph motorcycles. It clearly stood out in a company of machines which would have won some beauty pageants (body building championships in some cases) themselves. 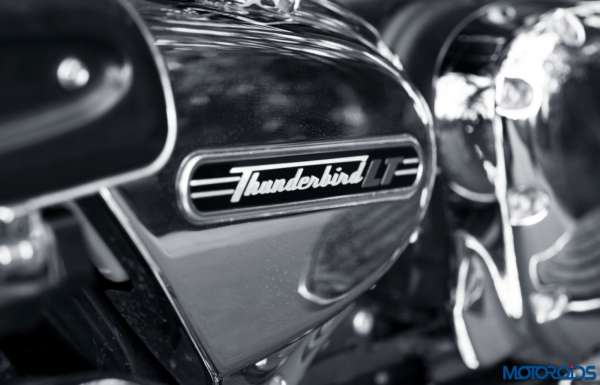 The LT moniker stands for ‘Light Tourer’ – we think it has been named like that with a pinch of humor. At 380 kg, it is anything but ‘light’.

Soon, the good blokes at the Triumph service station took it away for a wash, and we are glad they did, for if we were to clean it, we would’ve lost the slanting morning light taking the muck off those beautiful panels.

As it came out of the wash and stood outside, the heavy chrome almost blinded us as even in the morning, a splendid Delhi summer sun reflected on acres of chrome. We can only imagine the amount of elbow grease required to keep this bike looking spic and span. You better order cartons of motorcycle polish if you are planning to buy the Triumph Thunderbird LT.

Now, we aren’t exactly cruiser lovers but this bike does change the way we think about them. Be prepared for a lot of attention while riding this bike. 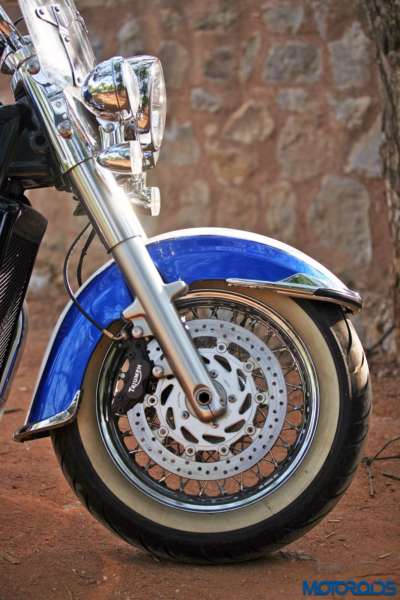 We loved the white walled tyres, mounted on 16 inch spoke chrome wheels, which take you back a couple of decades. 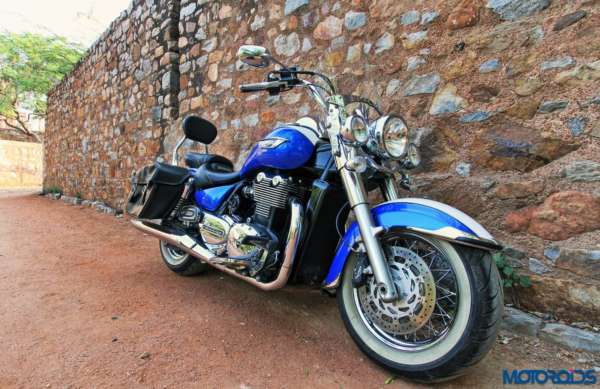 These beautiful wheels are mounted on 47 mm Showa Forks which provide 120 mm of travel. The chrome shrouds enhance the cruiser look. 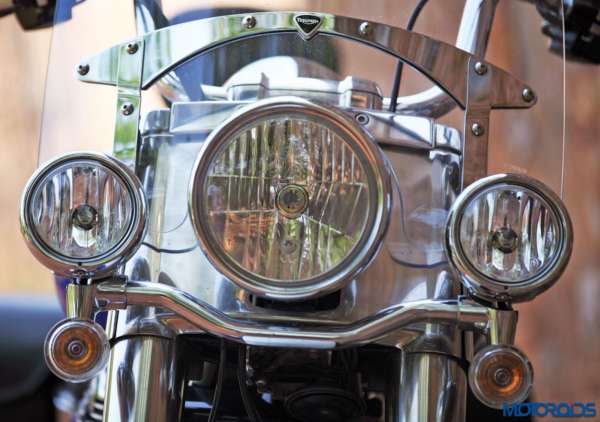 The headlight cluster is huge with a large round lamp flanked by spot lamps on both sides, and turn signals hanging below them. 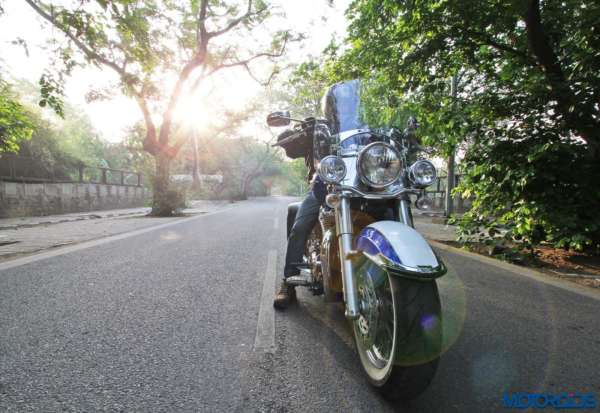 The touring windshield not only gives it a serious cruiser look, it is practical as well. However, if you do not like to ride with the wind shield, it can be removed easily and stowed away. 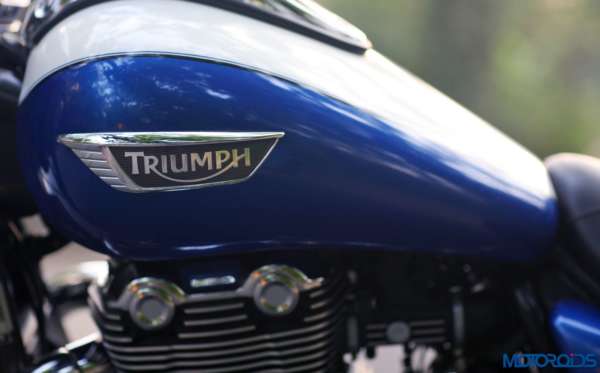 Fuel tank is wide and as visible in the side profile, it sweeps into the large padded seats. 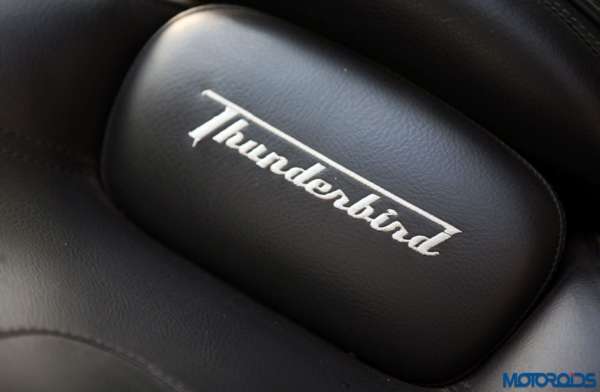 The name “Thunderbird” weaved in the lumbar support is a nice touch. 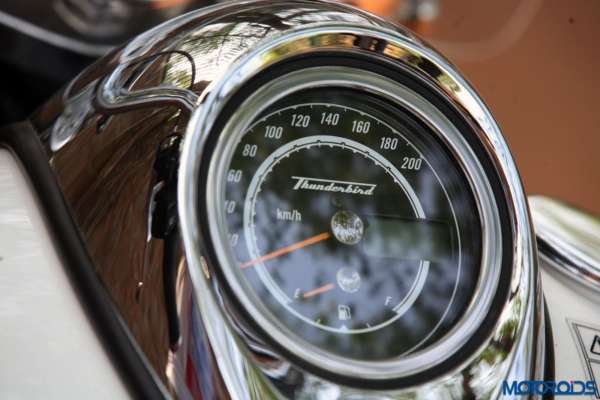 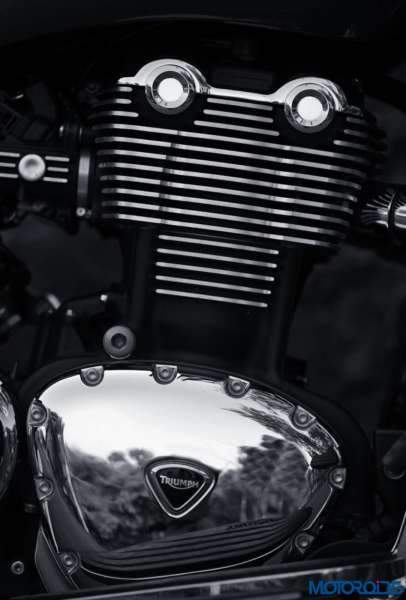 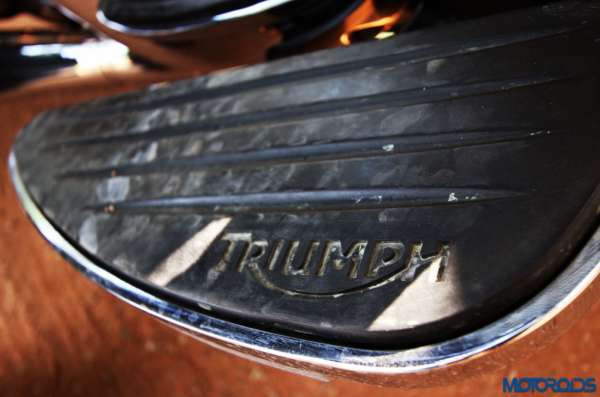 Coming down to the foot board, it is large and looks like a plot of land covered in rubber. 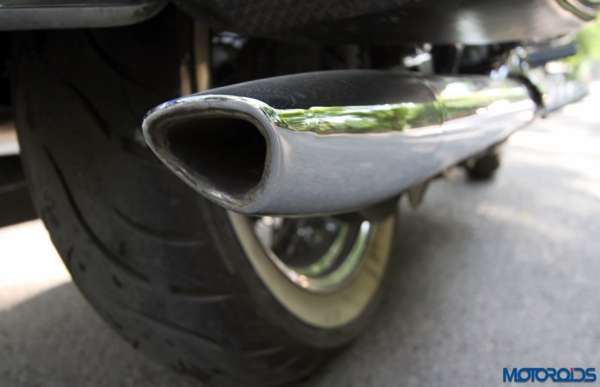 The triangular shaped twin chrome exhausts are aesthetically positioned and we like them. 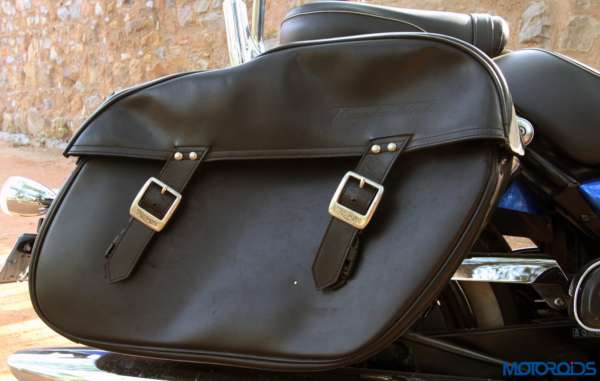 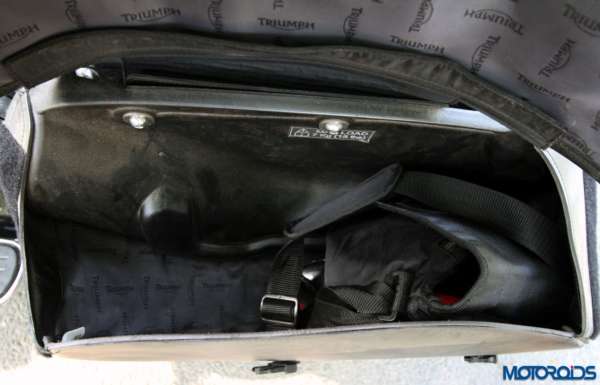 The standard fitment saddle bags enhance the cruiser look and spacious enough for carrying enough luggage for two people for a long weekend. 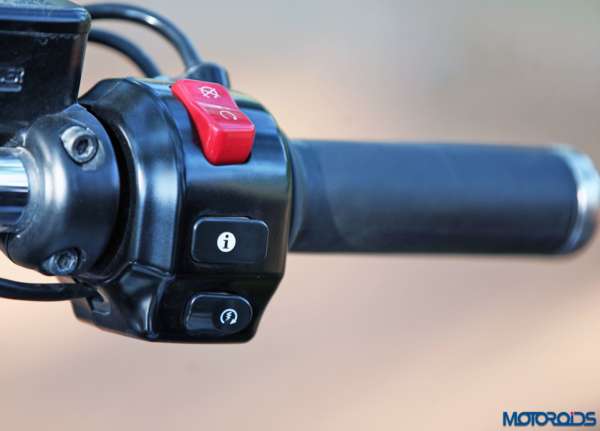 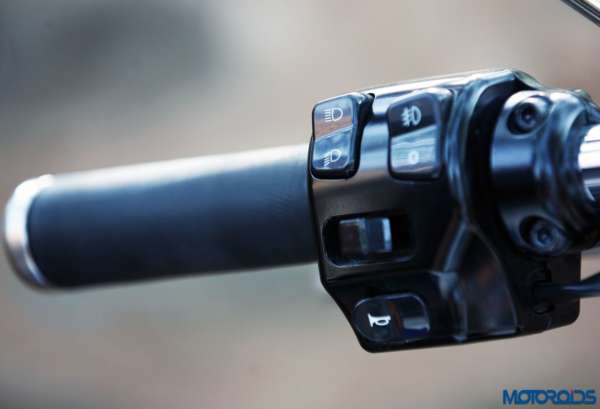 The switchgear is of a decent quality. Not the best out there, but doesn’t leave much to complain about. The horn button was a bit of a stretch to access. 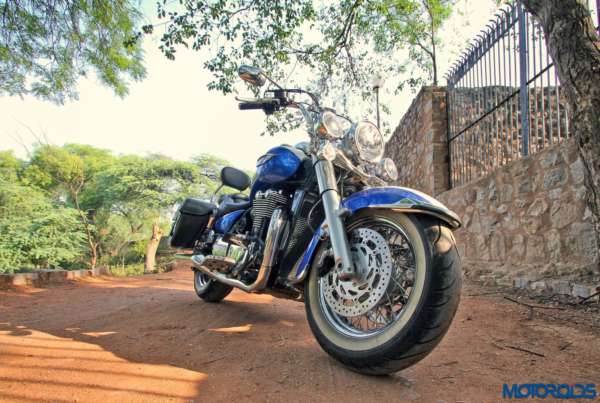 That’s quite a long description for a bike’s appearance, but we think the LT deserves all the adulation for the way it looks.

Cruisers, as already discussed are supposed to be ridden at a leisurely pace on long open roads. You do not require hundreds of horses between your legs, what you need is a strong torrent of low-end torque that takes you to those cruising speeds effortlessly.

It’s almost customary that cruisers are powered by V Twins, looking at the entire Harley Range, the Suzuki Boulevard and the likes. The engine on this Triumph, too, is a twin cylinder but the pots are arranged parallel to each other rather than in a V format.

According to Triumph’s claim, the Thunderbird LT features the largest parallel twin engine in the world. A little research validates their claim. Just to put things in perspective, one single cylinder block of this motorcycle is bigger in capacity than the entire engine of the Maruti 800. 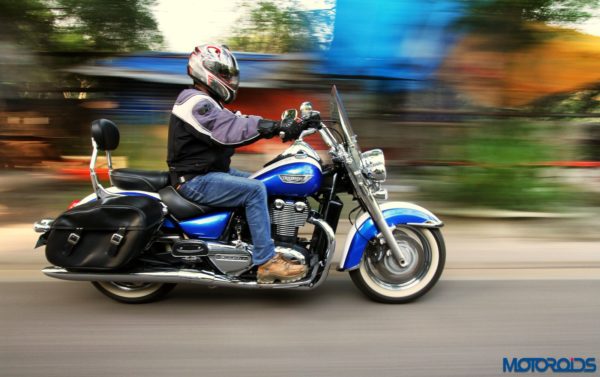 Pressing the starter button wakes up a slumbering monster. The engine awakens with a loud grunt. It’s got a good note and an old worldly, charming vibe to it. We could feel the pistons moving in the huge block, in a likeable, immersive way. The parallel twin setup has made the engine compact compared to a V twin and hence it could be placed relatively forward, which helps if you don’t like your legs getting cooked while riding.

Big parallel twins are prone to have more vibrations compared to 90 degree V Twin but with 270 degree firing angle, the LT’s mill gets a more even firing interval compared to 180 degree or 360 degree firing angle. It also manages to radiate the feel of a V twin engine. So we have a classic looking bike with a modern engine with the advantages of Parallel twin but characteristics of V Twin. It’s best of both the worlds in a classic format. Well, pretty much.

Slot the bike into first gear and the cogs swap positions with a clunk. Release the large aluminum clutch lever, turn the throttle, and the Thunderbird pulls forth like a locomotive. With 150 Nm of torque coming in at 3,400 RPM, there is ample low end grunt to propel you forward with a great degree of force. 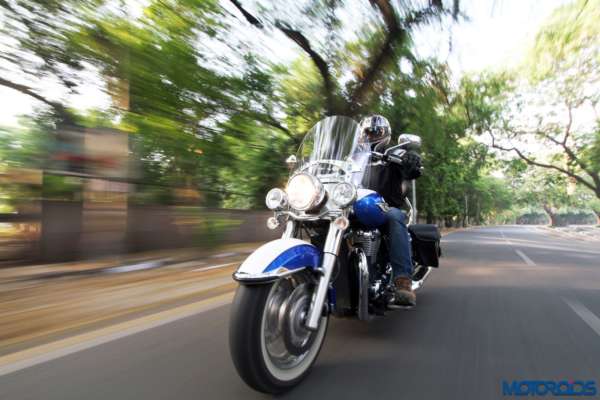 With 91 horses under its belt, the 380 kg bike hits the ton effortlessly. The engine is pretty smooth too with no irksome vibrations making it to handle bar. With both heel and toe shifters available, one can save their expensive shoes from getting the smudge and cuts which comes with riding bikes. Being used to generally riding sporty machines, I tried using only the toe shifter but the small gap between the board and the shifter didn’t quite welcome my fat boots. I did manage to get used to the set-up after a while though.

The gearshifts, however, are stiff, and one has to hit the heel shifter hard, to swap cogs. However, the gearing and the torque doesn’t call for frequent gear changes. The bike pulls well in taller gears even at low engines speeds. Stay in third and you can cruise through the city with no hassles.

Munching miles on wide, open highways with great stability while also offering supreme comfort to the rider is where the LT excels. The wide, thickly padded seats with great back support endows the bike with couch-like comfort. The seating position is upright, and the hadle bars are wide but comfortable. 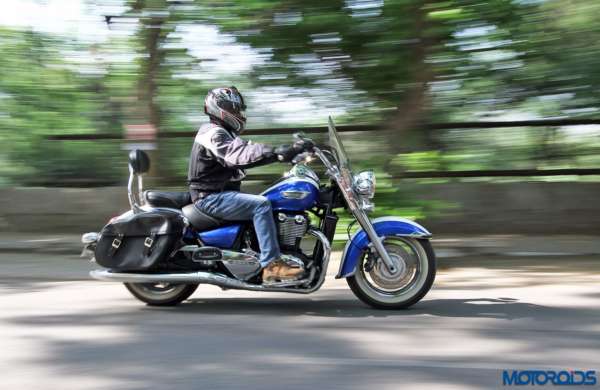 Bend the knees at 90 degrees, plant them comfortably on the foot-board and the LT will ensure that you don’t get tired for a substantial distance. The riding position is really very comfortable overall. Give this bike miles and miles of smooth tarmac to cruise, it will eat all those miles for breakfast and ask for second helpings. With two 310 mm front discs with four piston calipers, the bike has good stopping power too.

At normal cruising speeds, the bike tackles the undulations on the road with aplomb but north of 100kph, it feels a bit bumpy over sharper edges and rough patches. The LT is made for smooth, well laid out surfaces, and riding it over rough patches isn’t easy due to the massive weight and the relaxed riding position. Also, with all its weight and relaxed character, the LT doesn’t like changing directions too quickly.

Did I just hear the question “How is it around corners?”. Good for it’s size and segment, though expecting it to carve corners would be travesty. It takes a little getting used to, but once you get the hang of it, the tyres provide decent grip, and the bike holds its line well enough. However, the lean has to be limited as the low mounted footboards touch the road pretty easily. The ride is pretty comfortable for pillion as well, who gets padded seats with footboards and a back rest to sit backk in a relaxed manner and enjoy the scenery blur by. 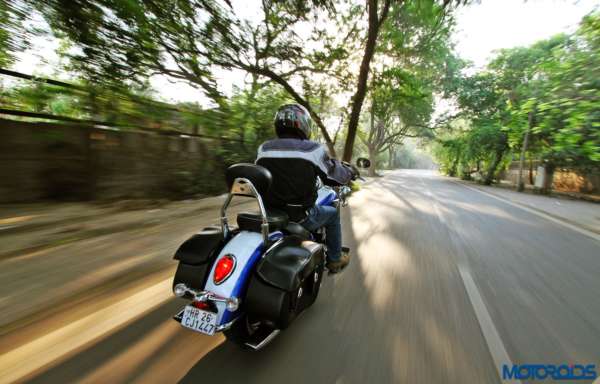 The Thunderbird LT can return good fuel efficiency for its size when it cruises around on open stretches. Expect anywhere close to 17 kmpl on long rides. With a 22 litre fuel tank, the range is above 350 km. The efficiency drops to 12 kmpl in city conditions though.

The closest rival to the bike internationally is the Harley Davidson Roadking. But since the model is not available in India, its closest rival is the smaller sibling of the Roadking – the classic version of the H-D Softail. We think Thunderbird offers a better value with the advantages of a parallel twin, size and plusher ride. For some, Harley as a brand works better than Triumph for a cruiser machine. For others, however, Triumph offer exclusivity, presence and refinement in a market swamped with Harleys. It works both ways.

The Indian Scout is another option which retails for lesser price, but the Thunderbird aces the baby Indian in terms of presence, power, cubic capacity and pure touring capability. 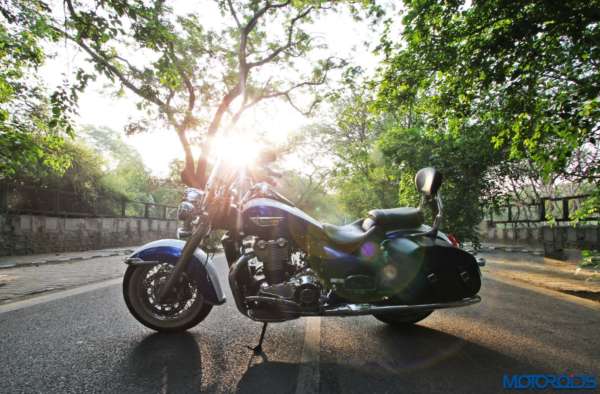 If you are really looking for a highway cruiser to travel on expressways at a steady pace, the LT is definitely one of the strong choices in the premium segment. The Thunderbird LT will stand you out from the crowd and offer an authentic cruiser experience. It’s not perfect for the taxing Indian conditions, but in all honesty, no other cruiser in its segment really is.

At Rs 15.75 Lakhs (Ex-showroom Delhi), it is what some would call expensive but looking at its alternatives the Thunderbird LT really comes across as good value for money.