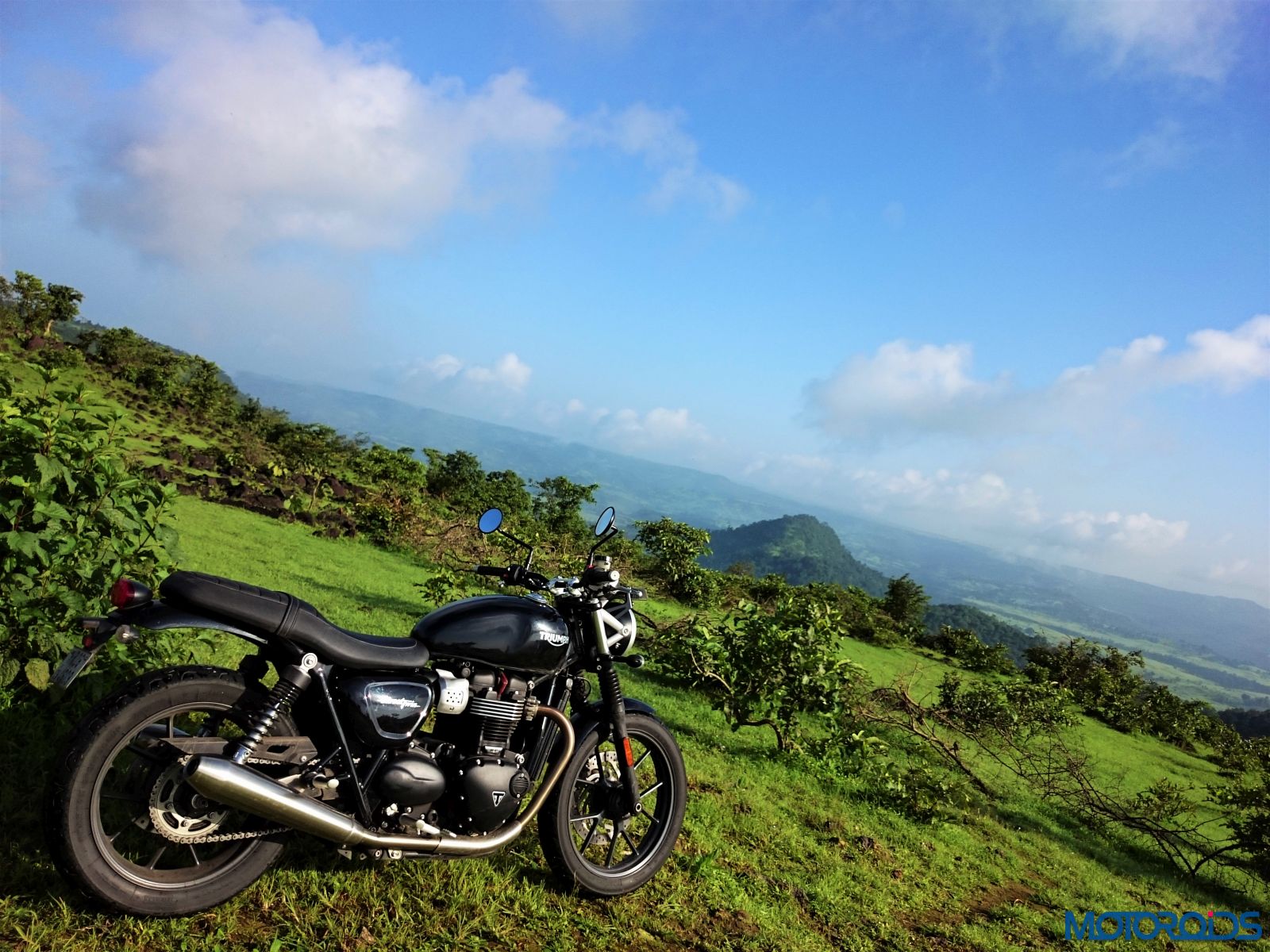 Am I doing it right? A thought crossed my mind as I looked at a trembling needle indicating the Triumph Street Twin’s top speed. Perhaps I wasn’t, because it felt like someone had ordered the wind to rip my helmet off, along with the head inside. And as is the procedure before a sanitized beheading, the strap was trying hard to shave my neck against the grain.

So I roll off the throttle, the old school needle still shivering, now trying to point at 80. My left palm goes on the hip and my vision appreciated things that passed by, all bathed in colors of dawn. Was this the effect of scrubbing 100 kph? Or was this just the morning light massaging its after shave balm on that razor burn? I’m very certain it was none of that. Because something between my limbs had managed to make me relive my initial days of circular headlamp motorcycling. Times when a bike was looked at as a ticket to blue smoked freedom. Times when motorcycles were meant for carefree feels, and as long as it moved itself and the soul, everything else was secondary. 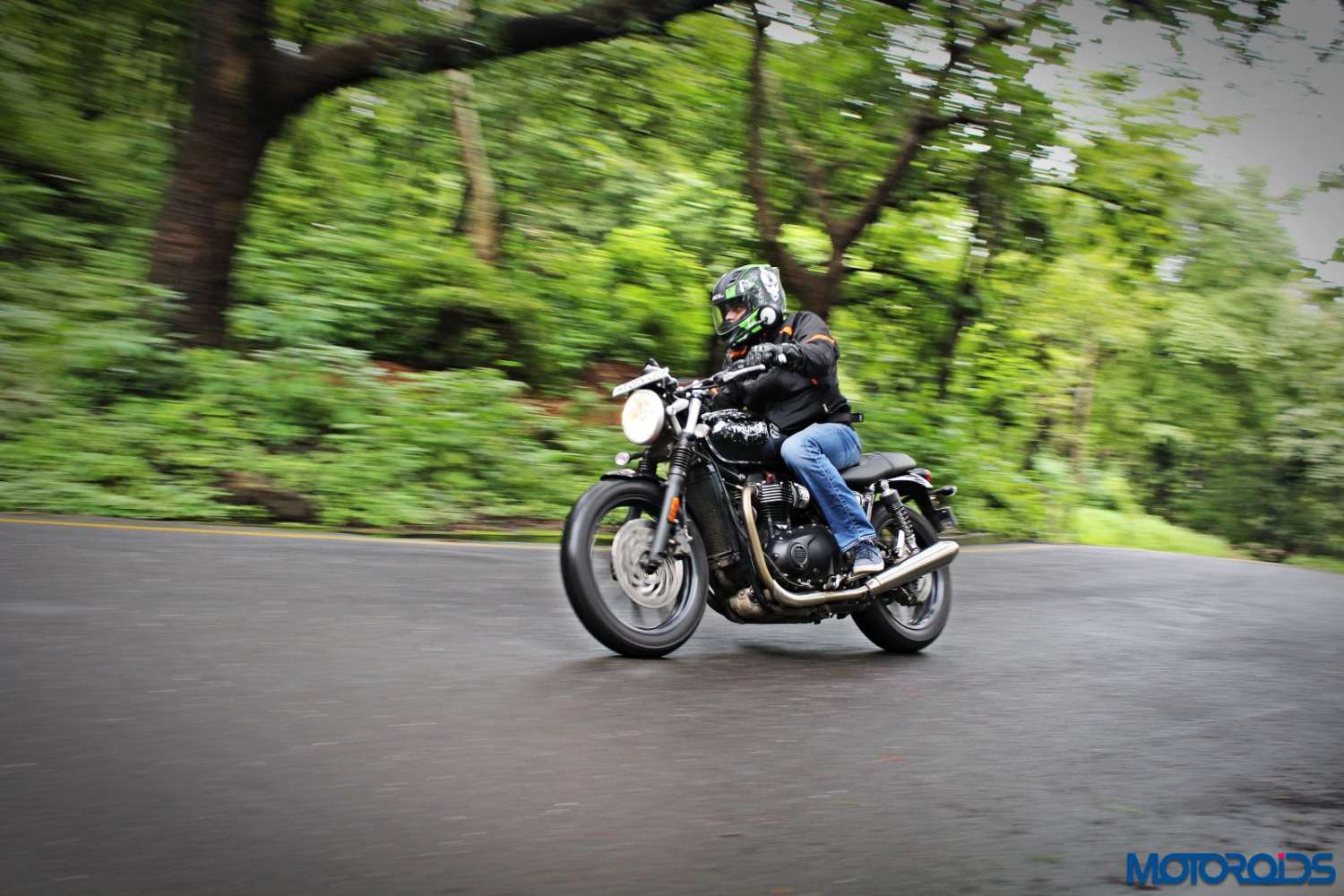 I opened the visor, wished I had worn an open faced crash helmet and my left palm got back on to the handlebar. As I accelerated, my unzipped jacket fluttered in glee and it occurred to me that I was doing it right. The Street Twin though was doing it way better than just plain right. Let me tell you how. 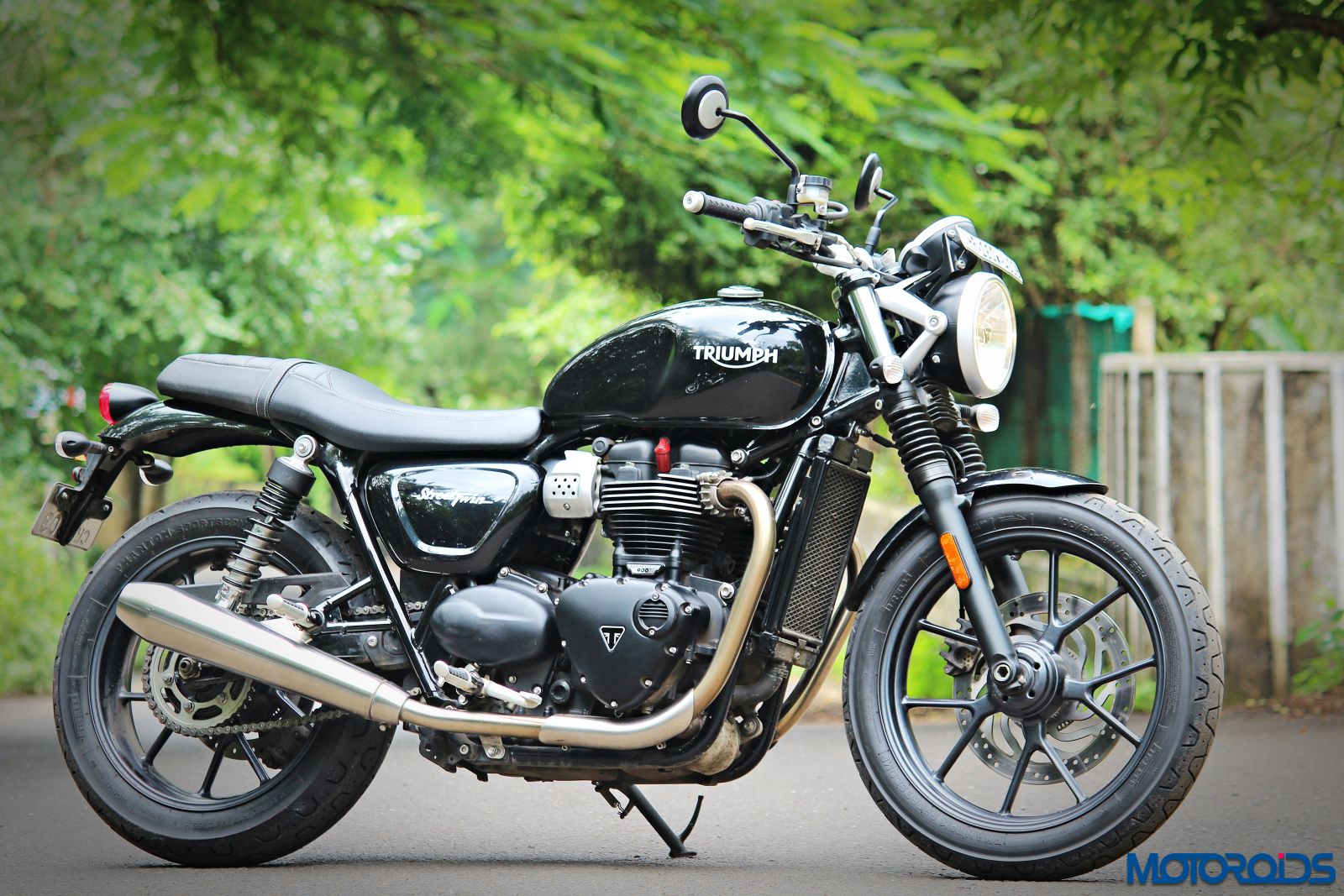 You’d say, a meager 55 bhp from 900 ccs of an 8 valve parallel twin energy block doesn’t sound right. But 90 Nm of twist, and all of that available at 3200 clicks, does make it feel right. I was in no mood to exchange pleasantries though. Early mornings and charged libidos have been strange bedfellows since forever anyways, and a cold, brief downpour had only made it worse. I had to find a way to calm things down, dry my clothes. So I dump the idea to cuddle and start killing it. My X-Rated intent wanting to fast forward a mushy flick and find what mattered at that time. I wanted to be a bum. 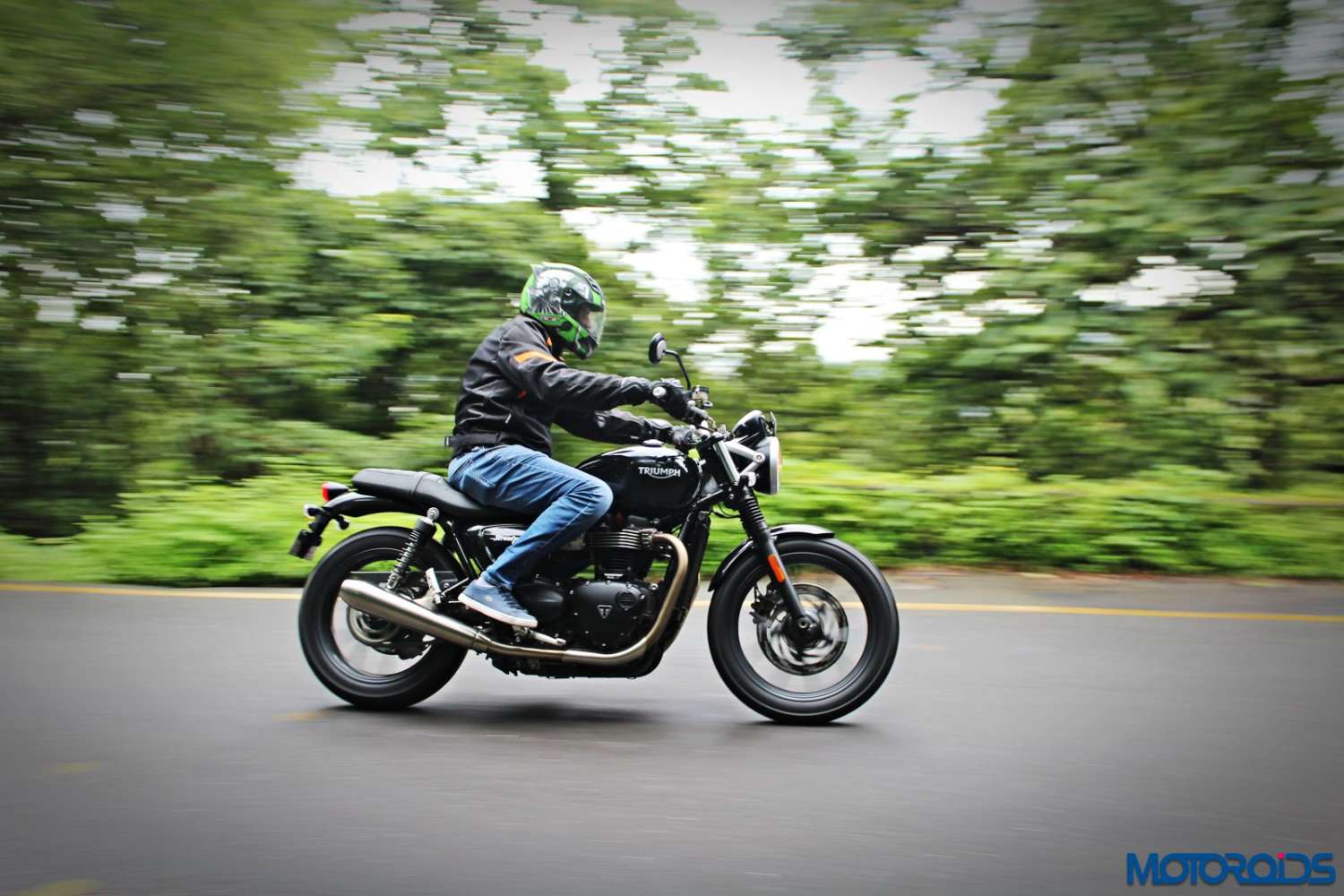 With five positive clicks at my left foot’s disposal, I pinned it. The first ratio ran out at an indicated 80 kph, second took it till 110, third breached the 145 mark as the engine still kept calling my name, 4th got us till 160+ and the final click peaked when the speedometer orgasmed, just shy of the 180 kph mark. It was surprising how the Street Twin felt at ease while doing all that, because it isn’t supposed to do that. It will do it just to please you though, with utmost ease, and it’s fun too. Although there’s a better way to experience this motorcycle. 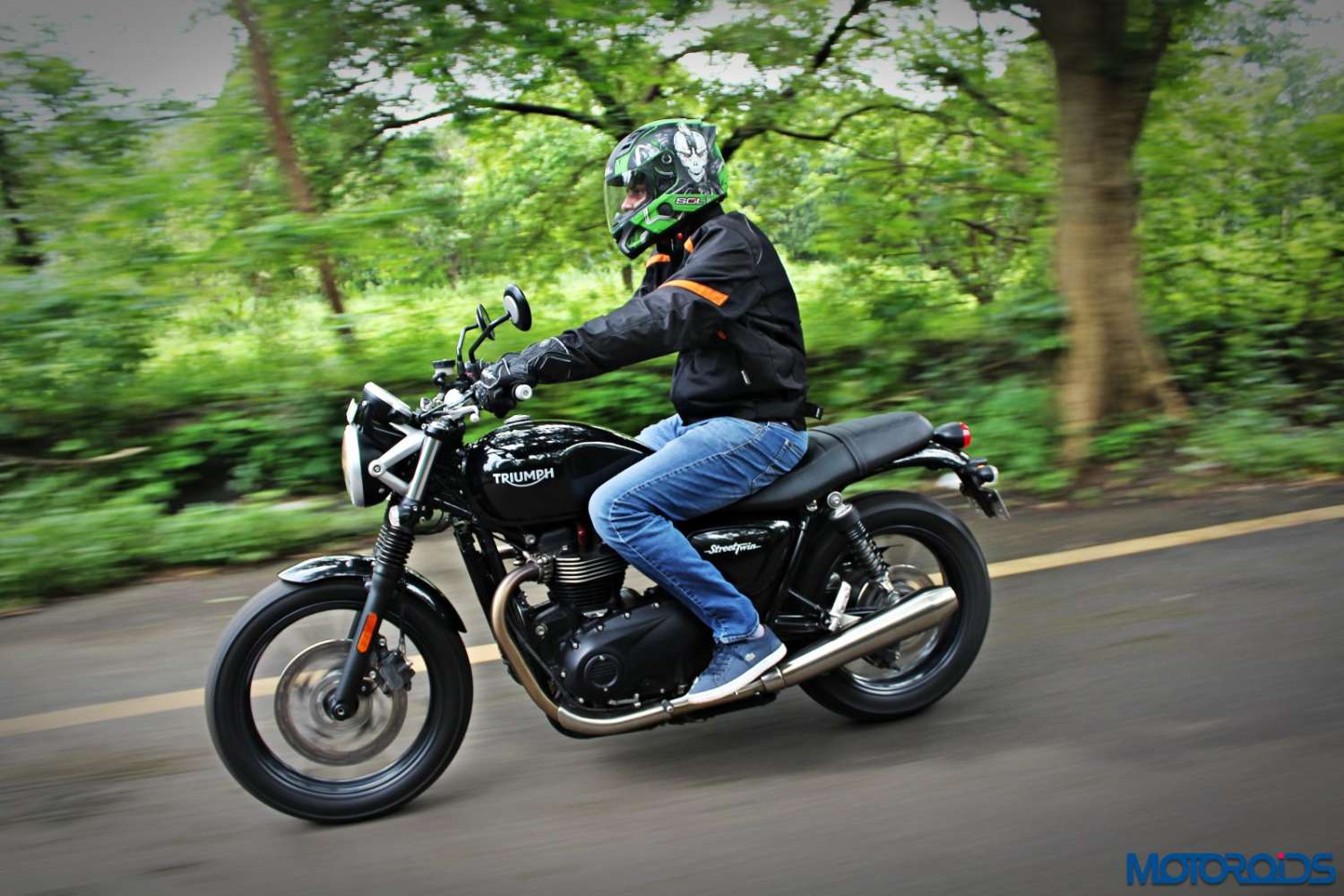 And that is, when you make the most out of that gooey torque in the mid-range. Savor the ease of a feather light clutch, settle into higher gears and open your ears to a gentlemanly, almost muted, distant sounding rumble from those twin pipes. A tall fifth ratio will allow the liberty to settle anywhere between the 80 – 180 kph mark. And all you need to do then is caress the electronic throttle and the Street twin gets up to speed with a graceful, regally feminine poise, subtly blowing your brains off with its gentle, yet mighty satisfying doses of twist. 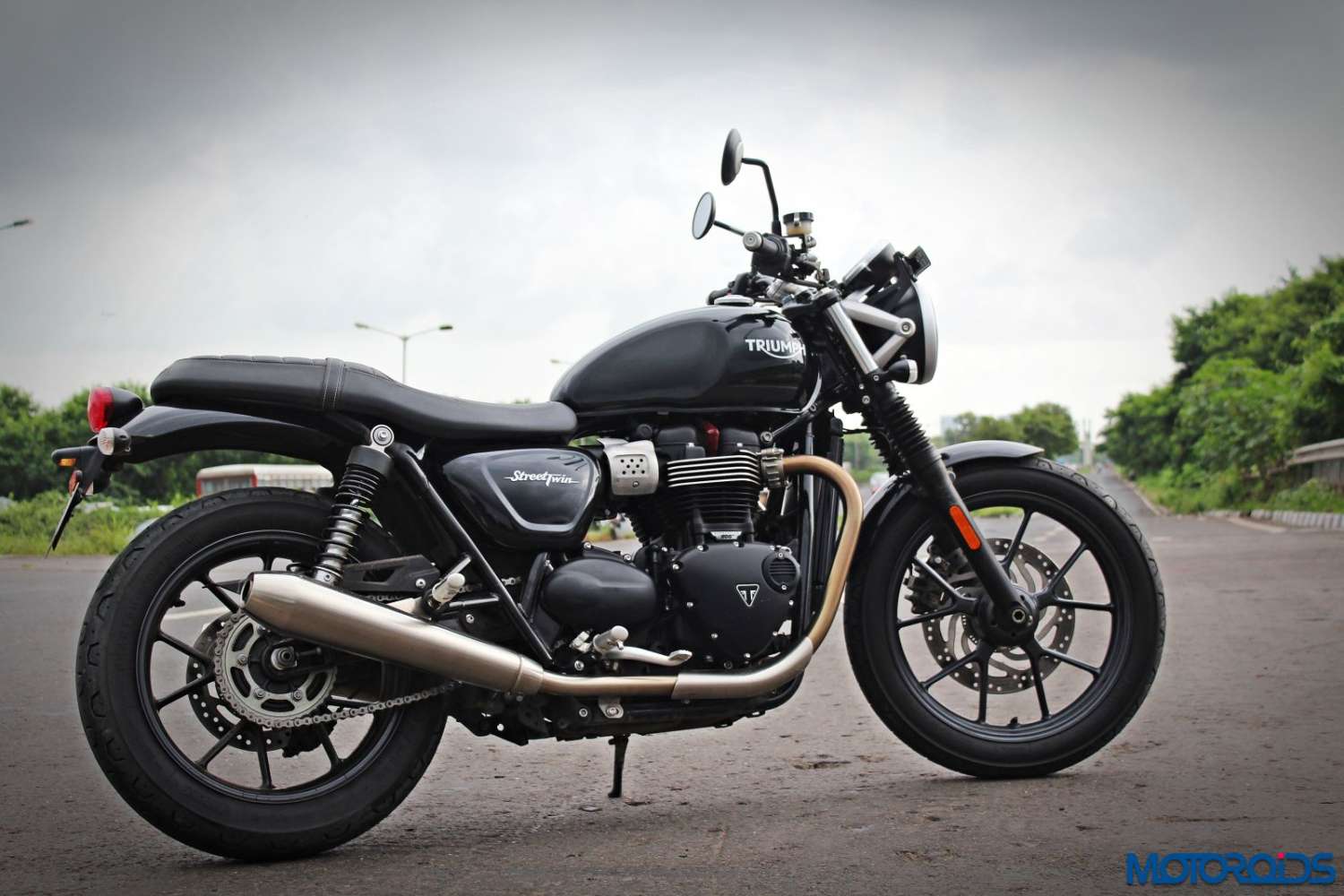 If your idea of fun on a motorcycle is waltzing around with the machine, the Street Twin is an ideal partner. She will Disco too, but then you know she’s not an 18 something girl who likes your in vogue beard and a weirdly contrasting waxed chest. This one’s a proper woman, one who admires your shaving regime. She won’t judge you for your mannerisms and identity though, and we shouldn’t stereotype. And you ought to know. The Street Twin is rather frugal with its needs. Surprised us with a 33 kpl figure when we were cruising on open roads. That number dropping only marginally down to a respectable 24 kpl in the city. 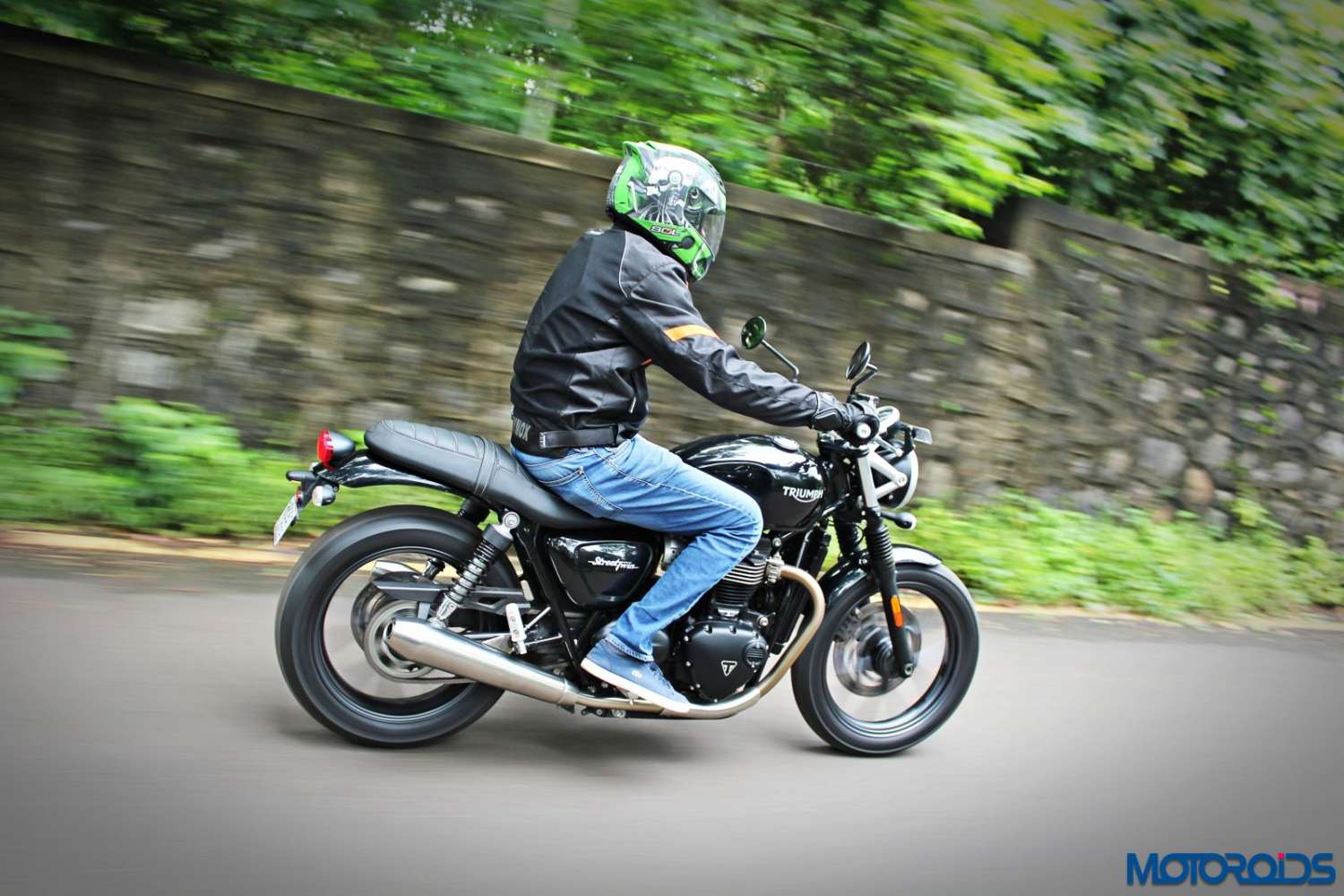 This Triumph is an amazing read if it was a book about the romance of casual motorcycling. It feels nimble in the saddle and is joyfully flickable. Allows for careless escapes through gaps in traffic and lets you weave your way through clutter, as you hustle unhurriedly, backed by the torque. The flat handlebar and slightly rear set pegs make for a comfortable, sportily upright posture, which makes even longish rides a rosy affair. 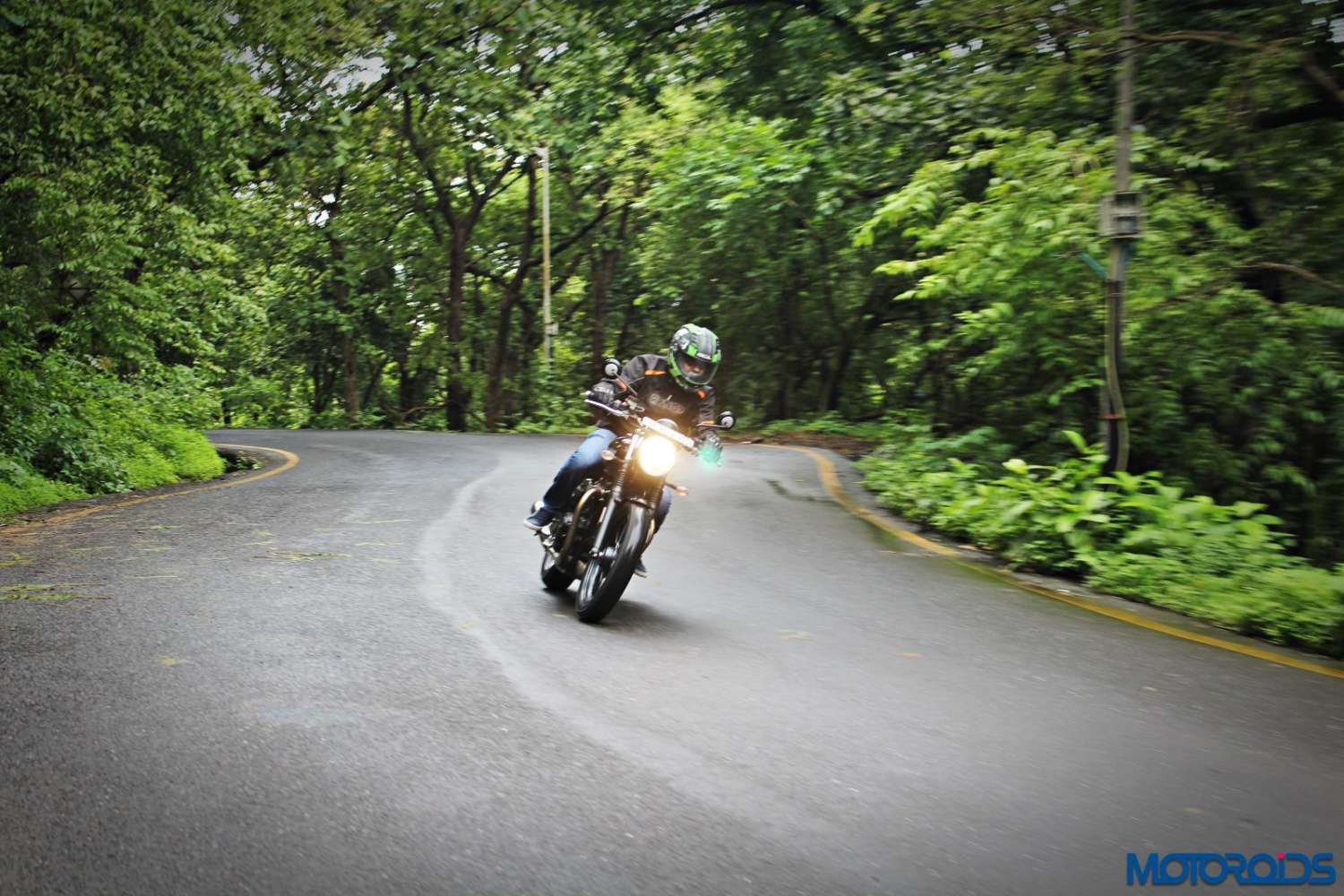 A conventional cradle frame attaches itself to 41mm forks up front, while a dual sided swing arm connects with twin shocks at the rear, both of them adjustable for pre-load. There is limited fork travel at the front though, and the system has been set up to stay comfortably firm. While one would expect the system to become more absorptive as the speedometer travels north, at higher triple digit speeds, mild bumps on the tarmac would make my feet and bottom levitate a few cms above their ideal positions for some milliseconds. The bike will Triumph over bad patches with ease, but it’ll let you know what lies beneath. 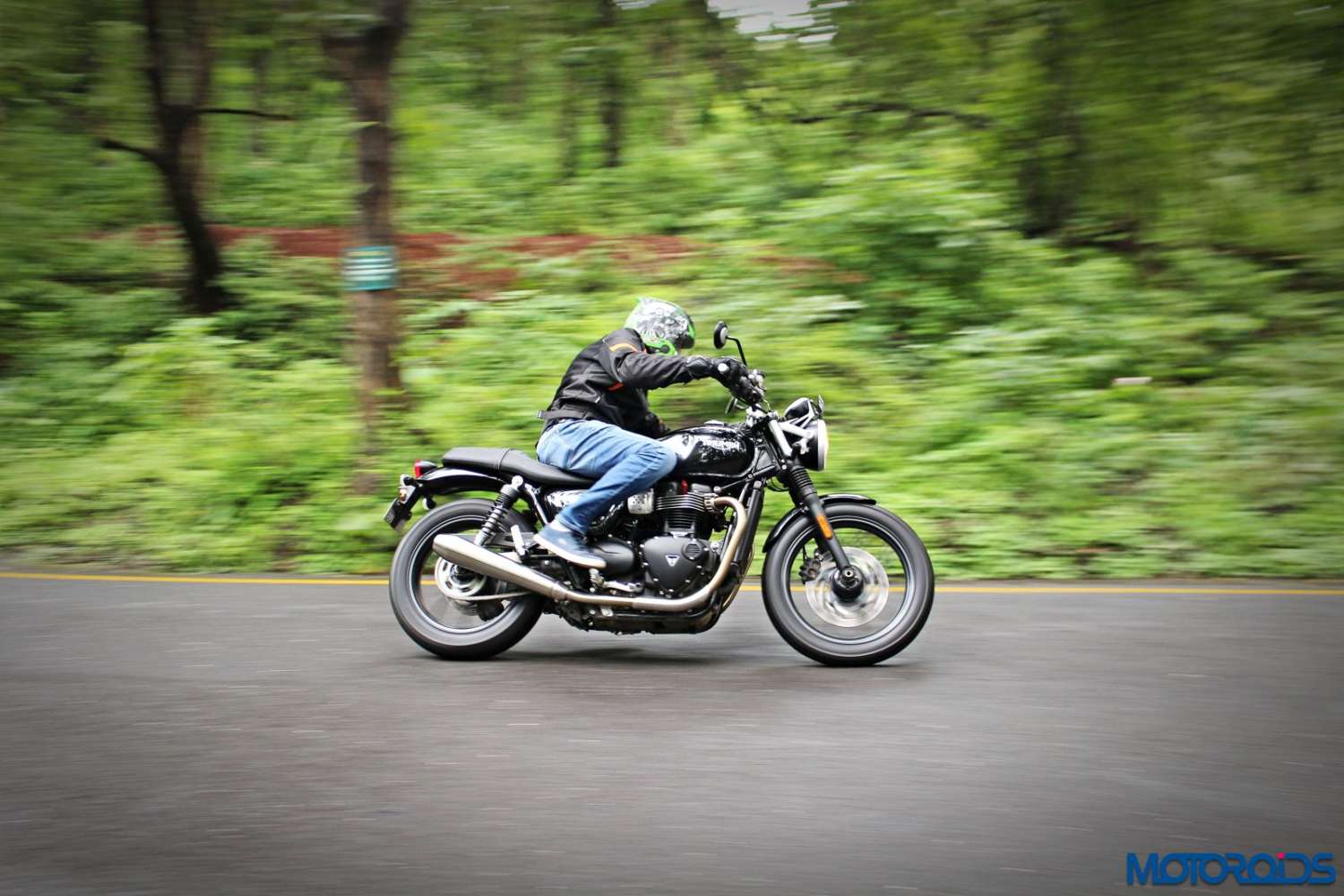 Here’s the bright side to that. The Street Twin is a fun motorcycle around bends. Wrapped with grippy Pirelli rubber, the bike holds its line extremely well through corners, and stays planted even through tidal tarmac conditions. Lean it too deep, and the upright seating position will make you want to switch over to rookie cornering techniques, where your knees don’t flare out too much, neither does your body shift like an eager pendulum. Subtle inputs get the job done just fine. Excellent weight distribution makes for quick turn ins, although the handlebar has a tendency to turn inwards more than usual, which calls for more than usual counter steer. Straight line runs are stable, the chassis maintains its composed, unhurried attitude, and it’ll only be the wind which will make you back off. 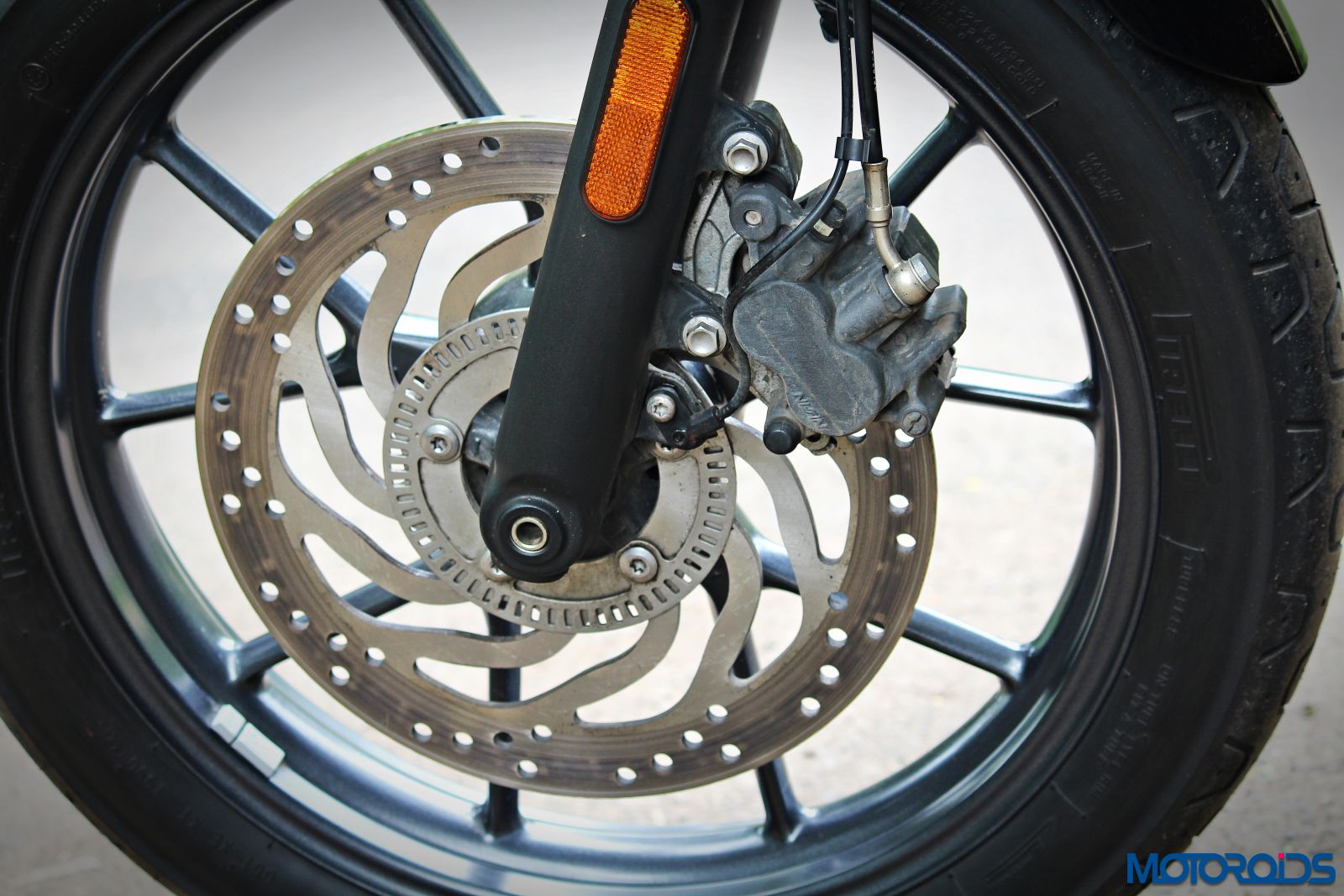 There’s a traction control system which can be switched off, and for the way the Street Twin delivers its blows, we switched it off and never felt like this bike needed it, even once. Triumph knows better though. A 310mm front and 255mm rear disc is grabbed by 2-piston floating Nissin calipers, governed by an ABS system. Braking at all times felt reassuring, positive and more than adequate. The system packs more stopping power than you’d imagine. 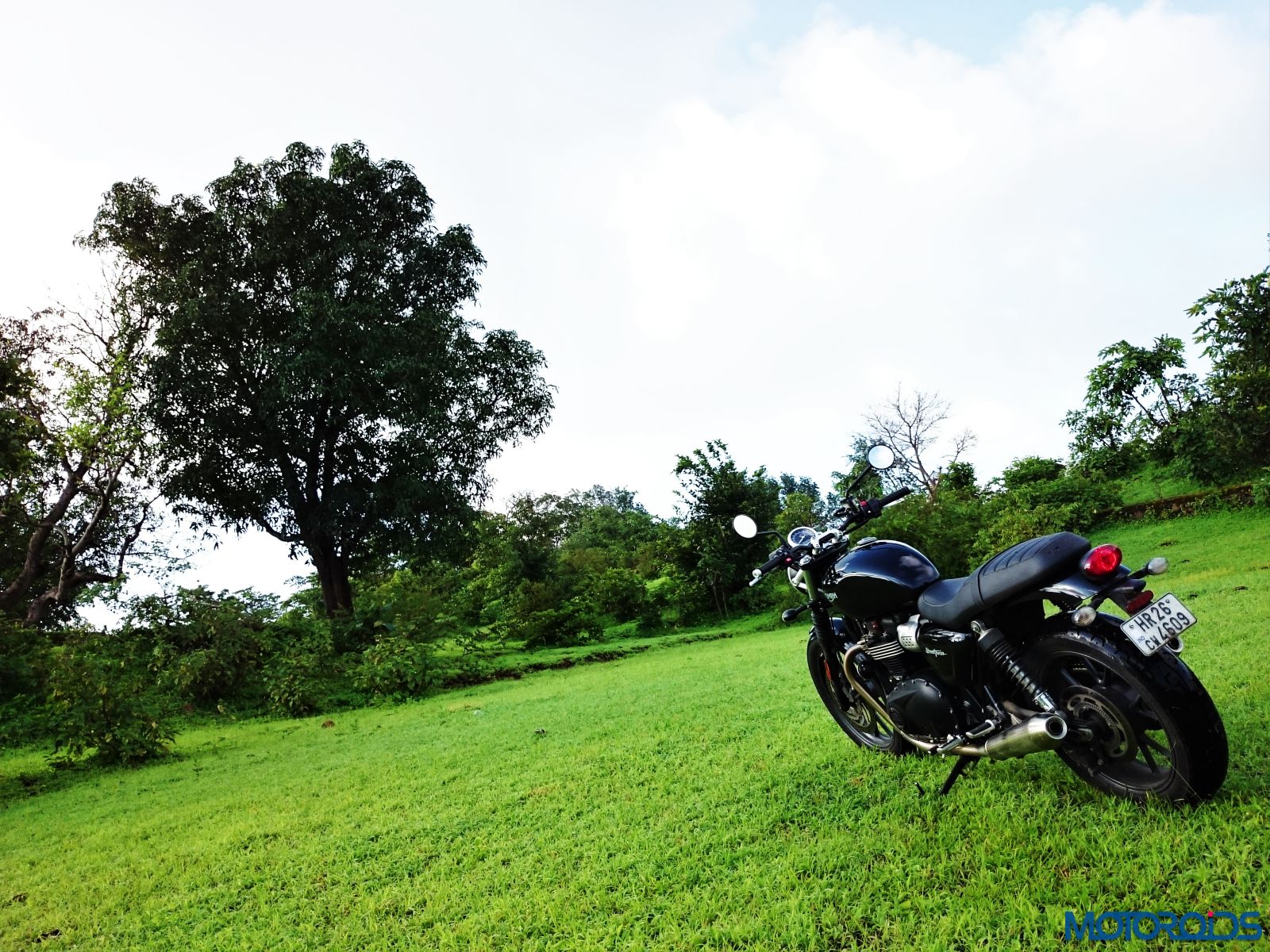 The Triumph Street Twin is skeletal, contemporary, yet flashes oodles of retro elegance in its appeal. We like the lack of shiny ornaments, which allows the motorcycle’s simpleton natural beauty to enamor you. The Street Twin’s styling is a modern day bioscope that provides a peek into retro and has that feminine grace of women from a bygone era. Women who are as rare as clean shaved men and twin sided razors these days. Oh and Triumph does further give you various options to customize the Twin. The bike’s styling is understated, and very personal. Look at it in isolation, and you’d admire. In a crowd, it blends in, unless someone’s really noticing. 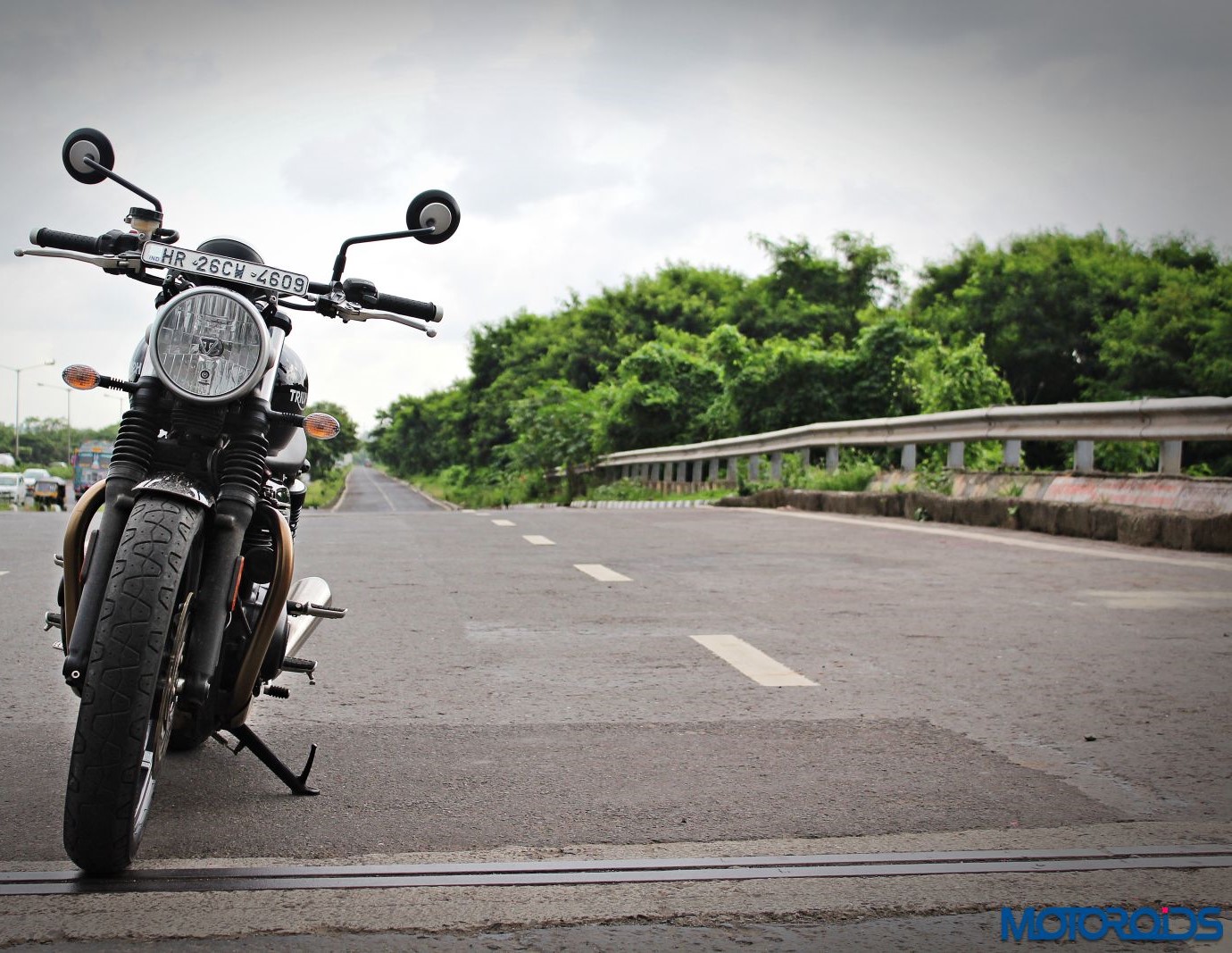 The Triumph Street Twin is a lovely motorcycle on all counts, a romantic machine. And the more I looked at it, the more I fell for it. It belongs to a genre of motorcycling, people who still whistle to yesteryear melodies will appreciate. But then again, motorcycling cannot be compartmentalized. At an asking price of INR 9.3 lakh OTR though, it wants to check the depth of your pockets and test your love for all things gentlemanly. It’ll play Bee Gees in your mind for free though and they’d have a question for you. How deep, is your love? 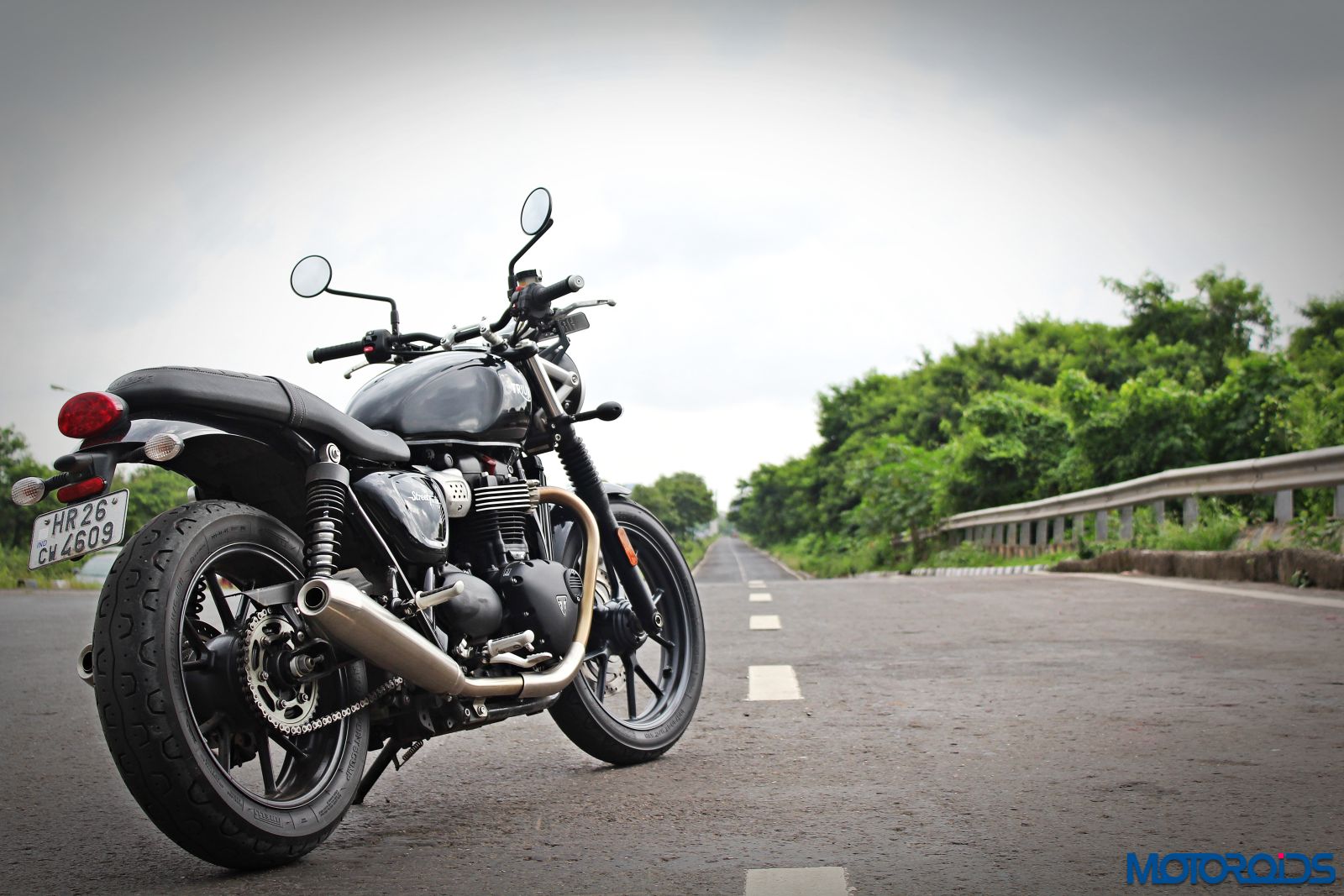 And just when I had started to send my thoughts to a far off destination, thought of tying a bag on the backseat and getting there, someone in the background started to dispense scrambled thoughts about a certain Ducati.

A few details through images: 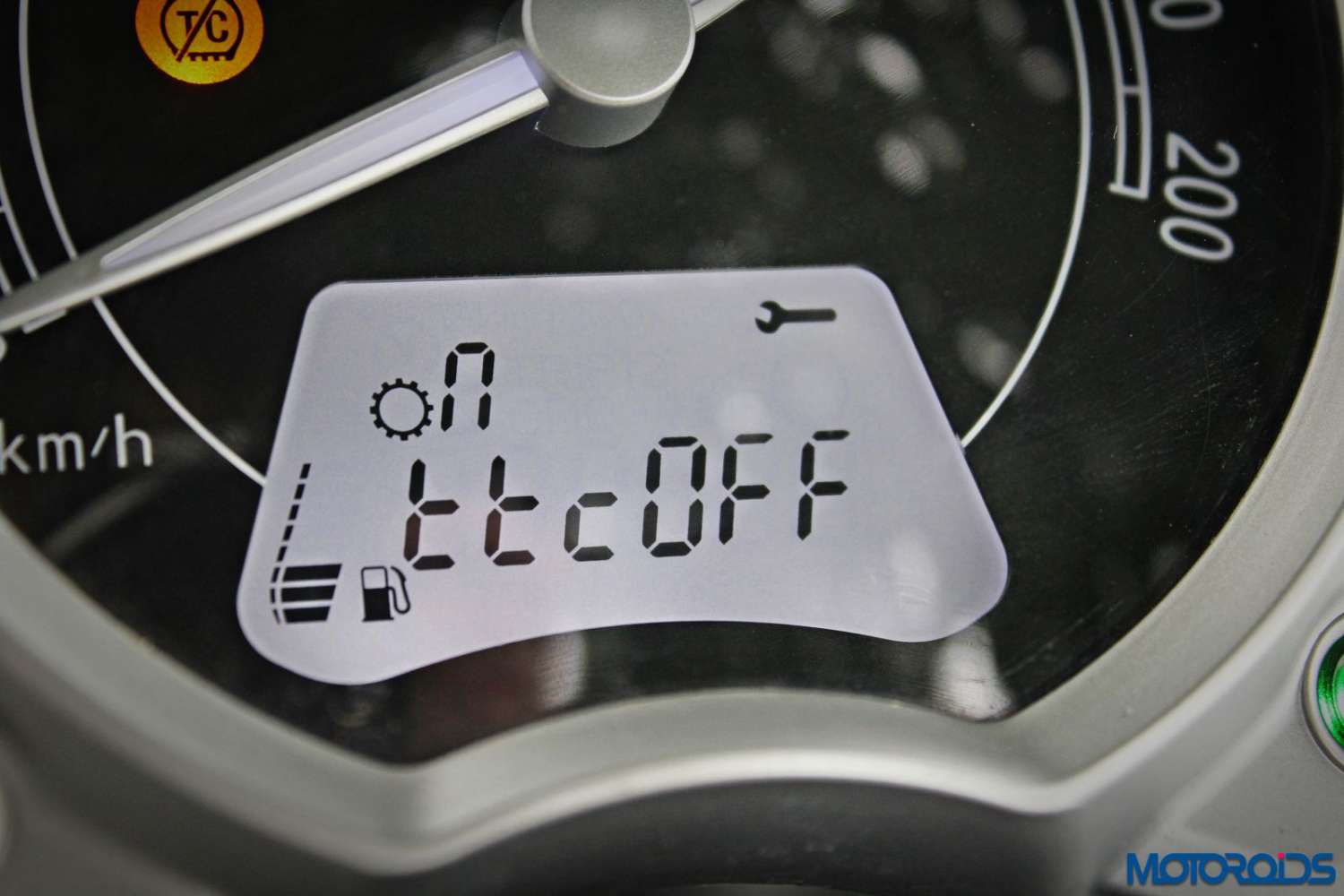 That is how it stayed all day 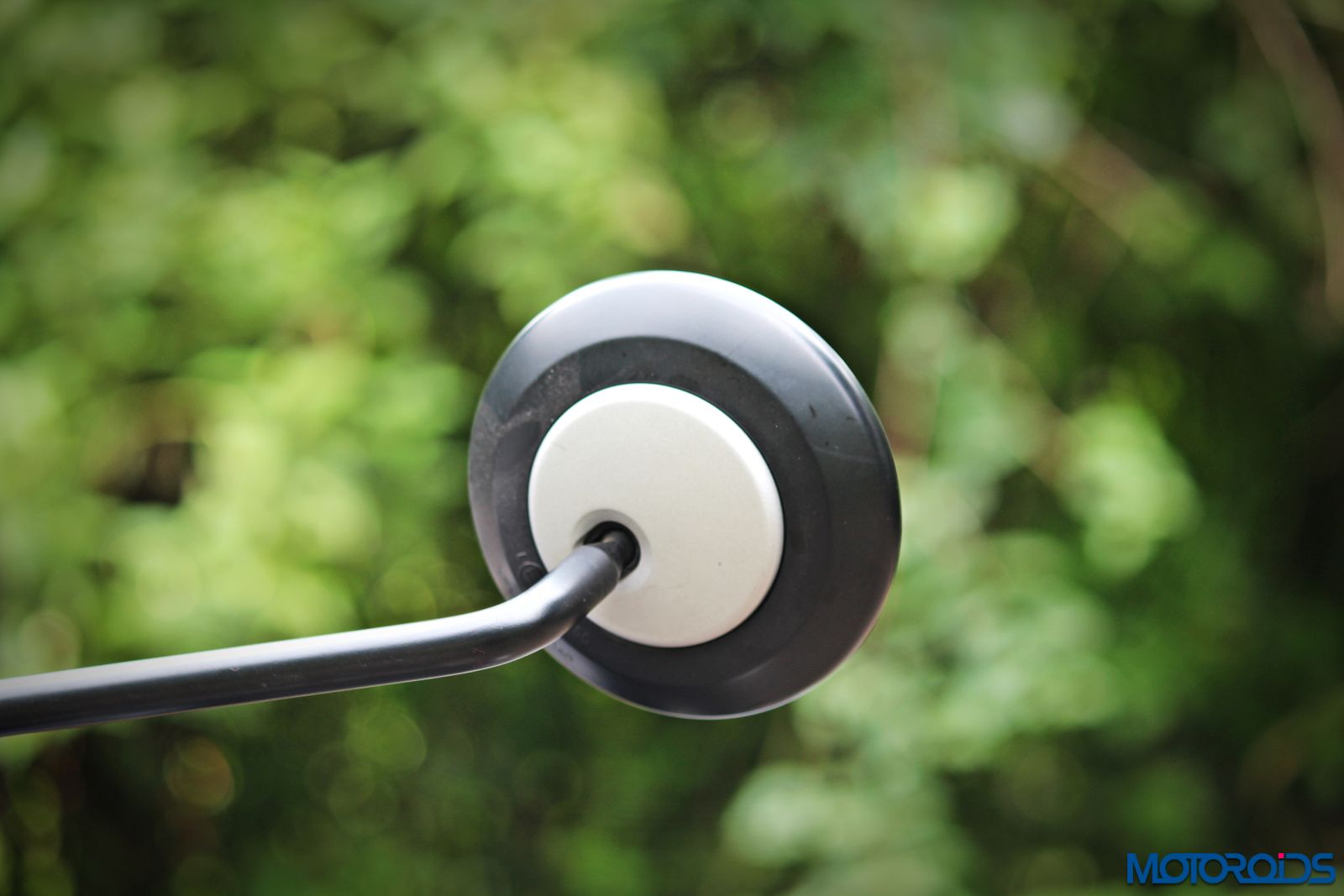 Retro mirrors never turned inwards even at higher speeds. RE must learn 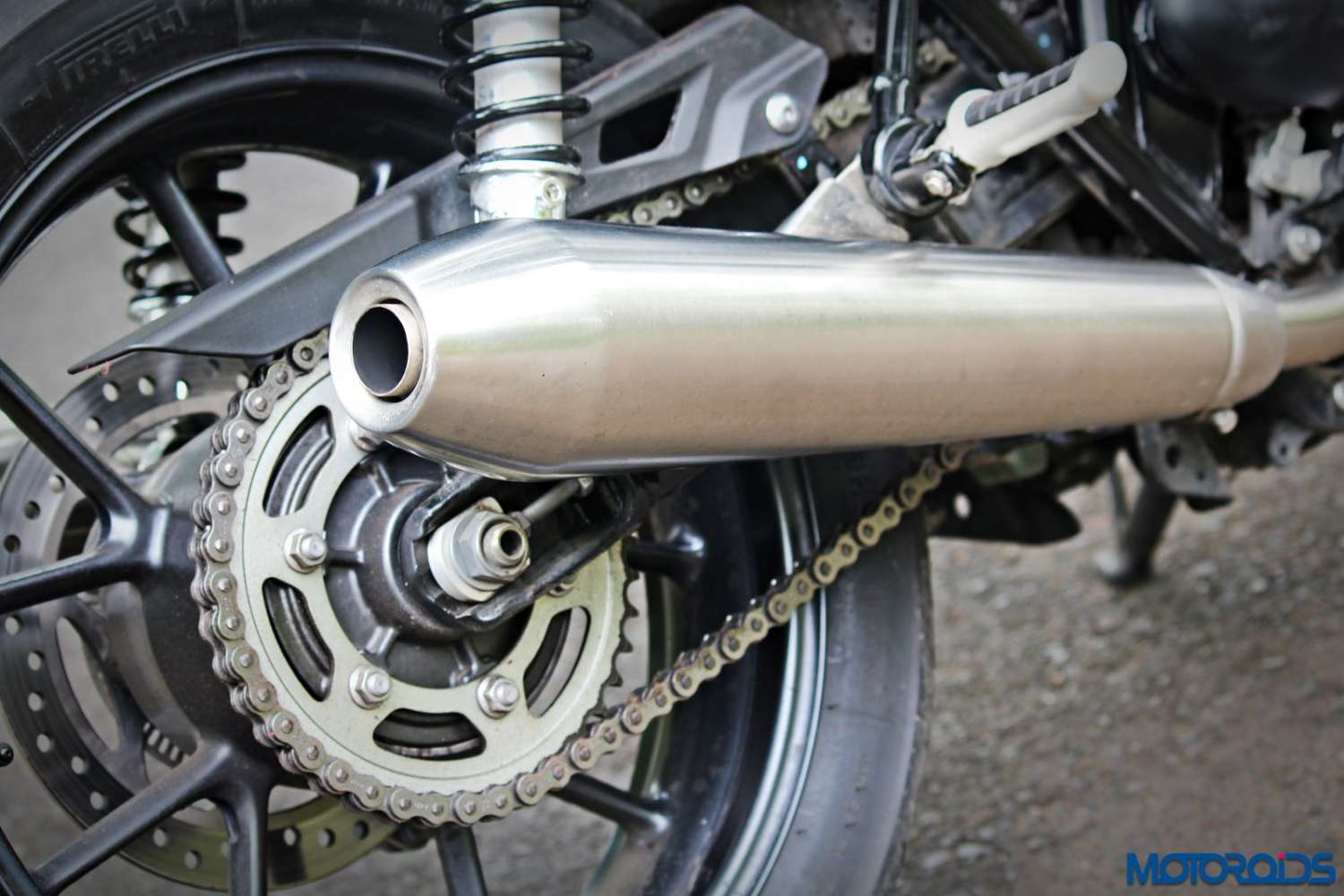 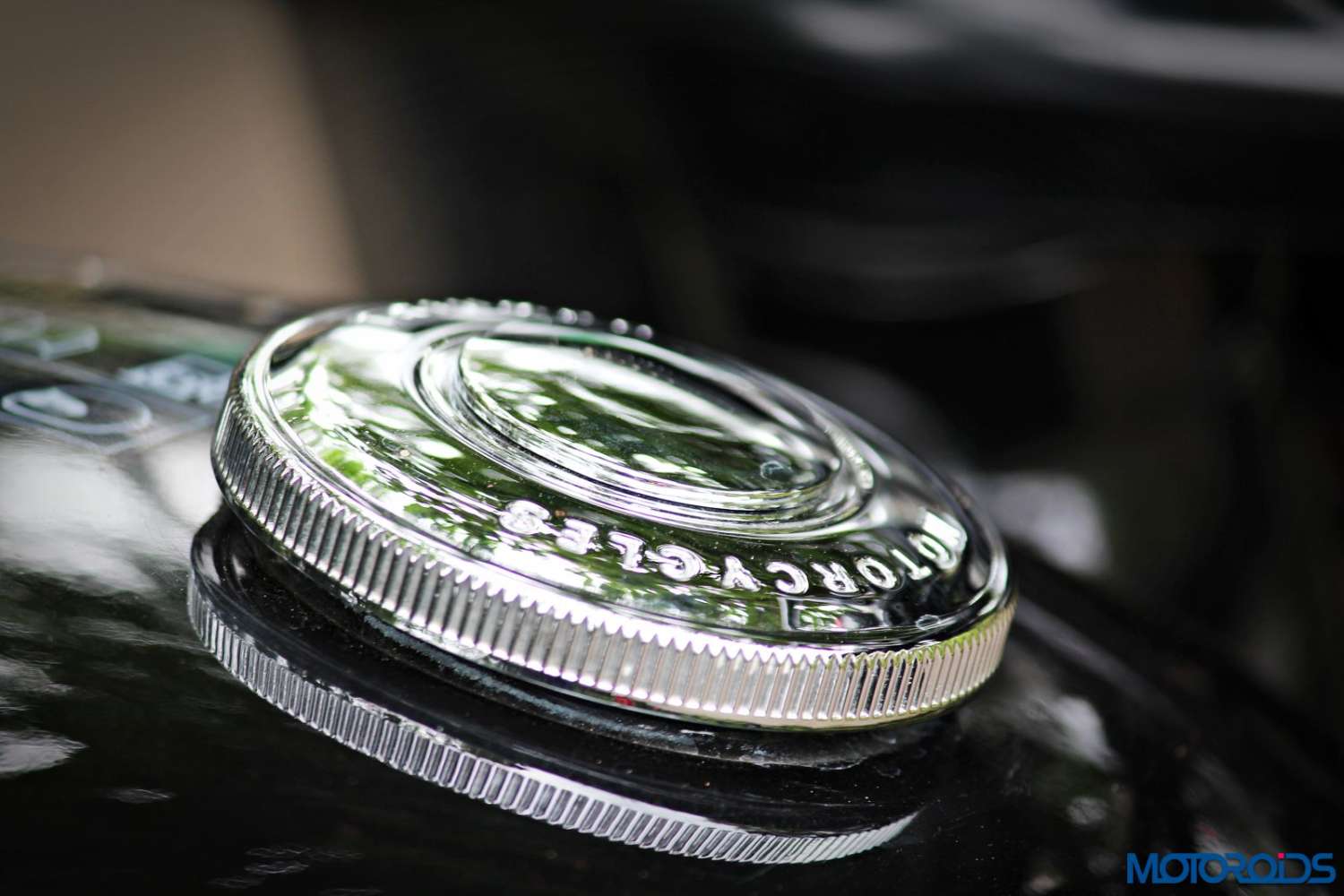 Is a joy to open and shut. Didn’t make my fingers bleed like a certain Harley 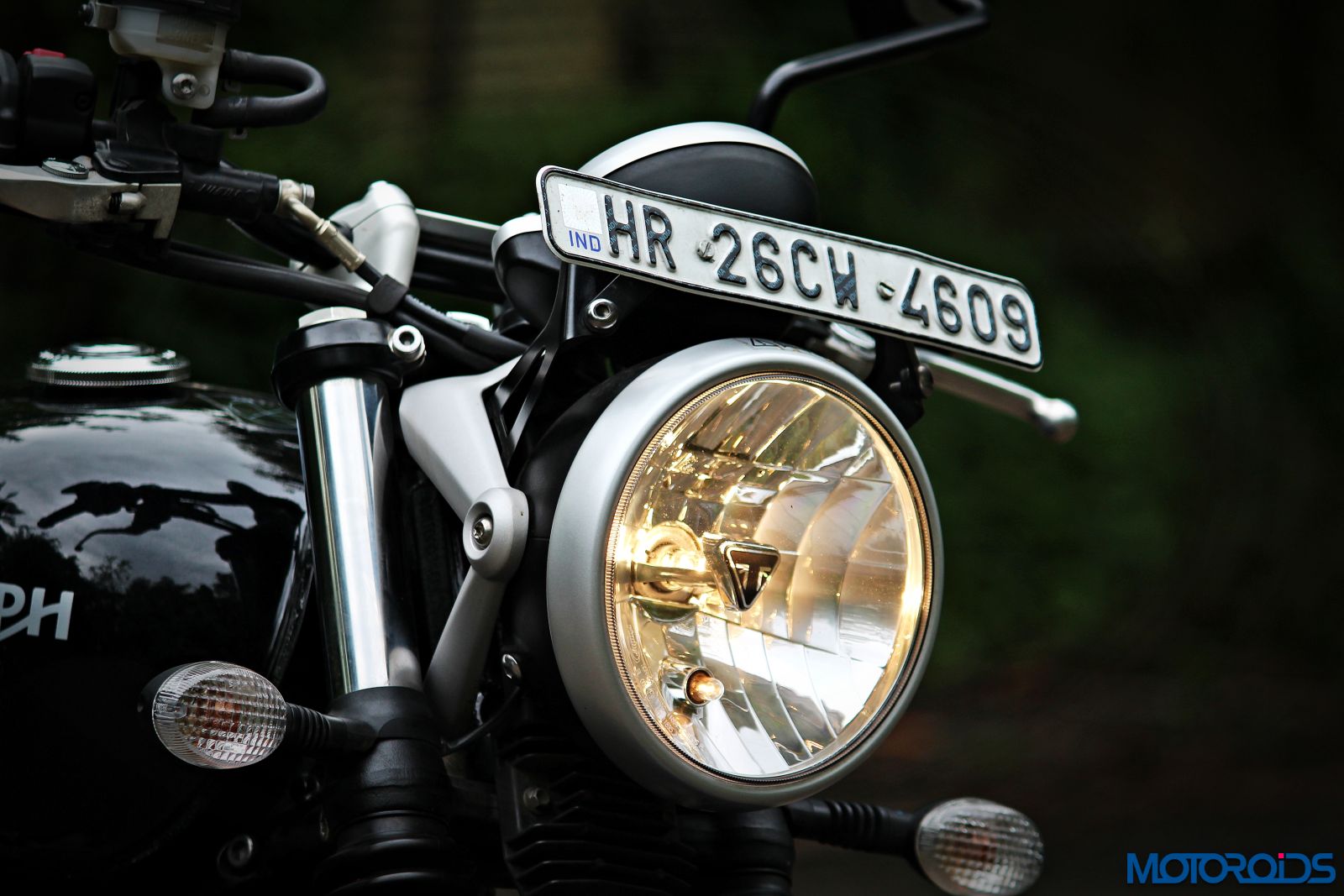 Illuminates the past after dark fantastically 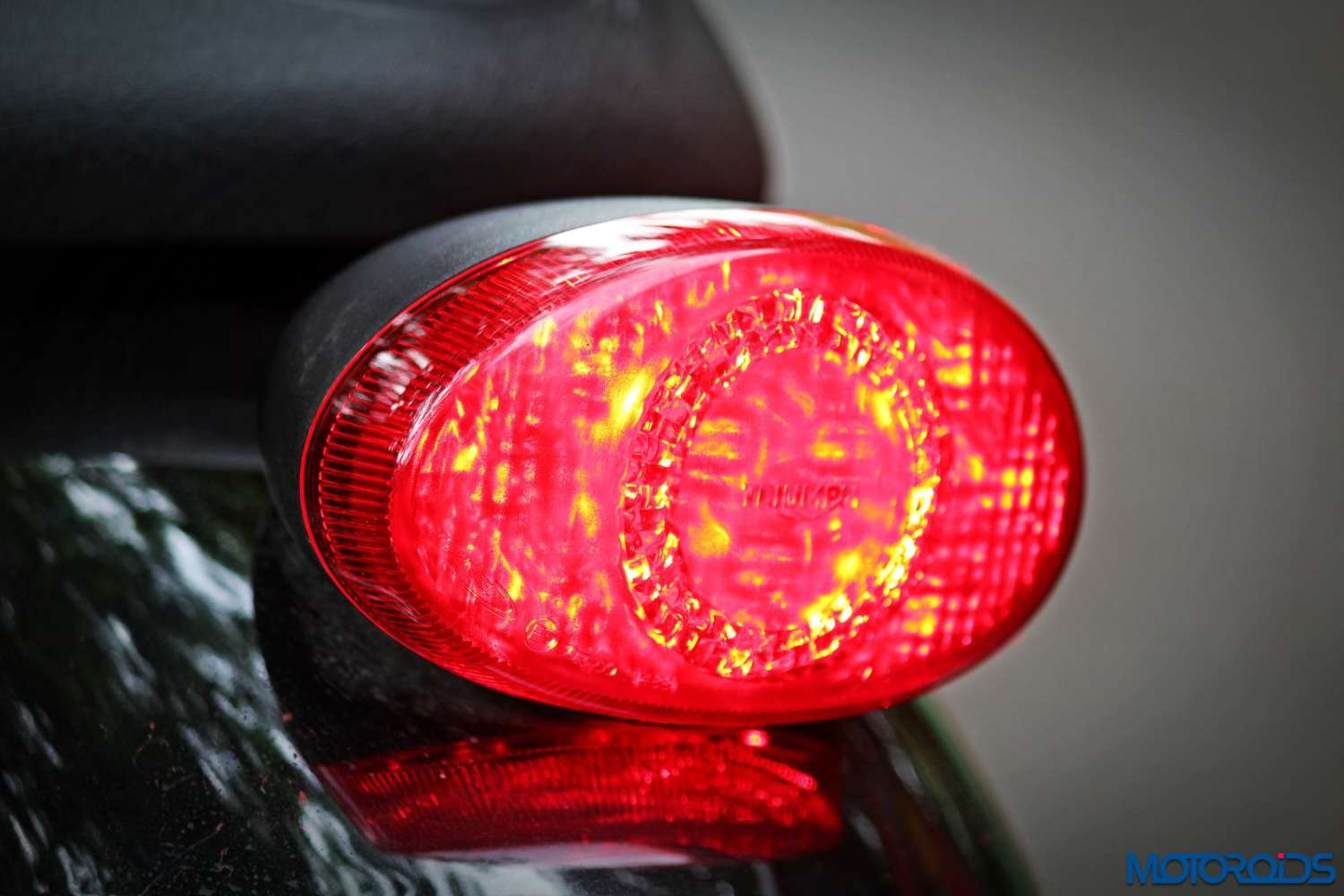 I have an apple. Do you have a pen? 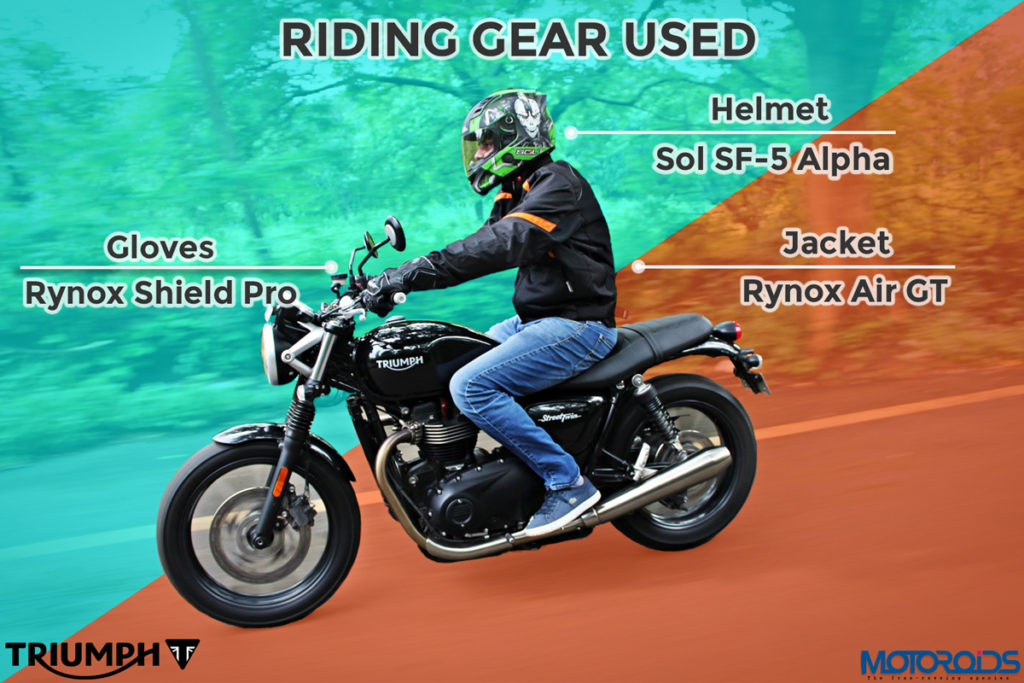