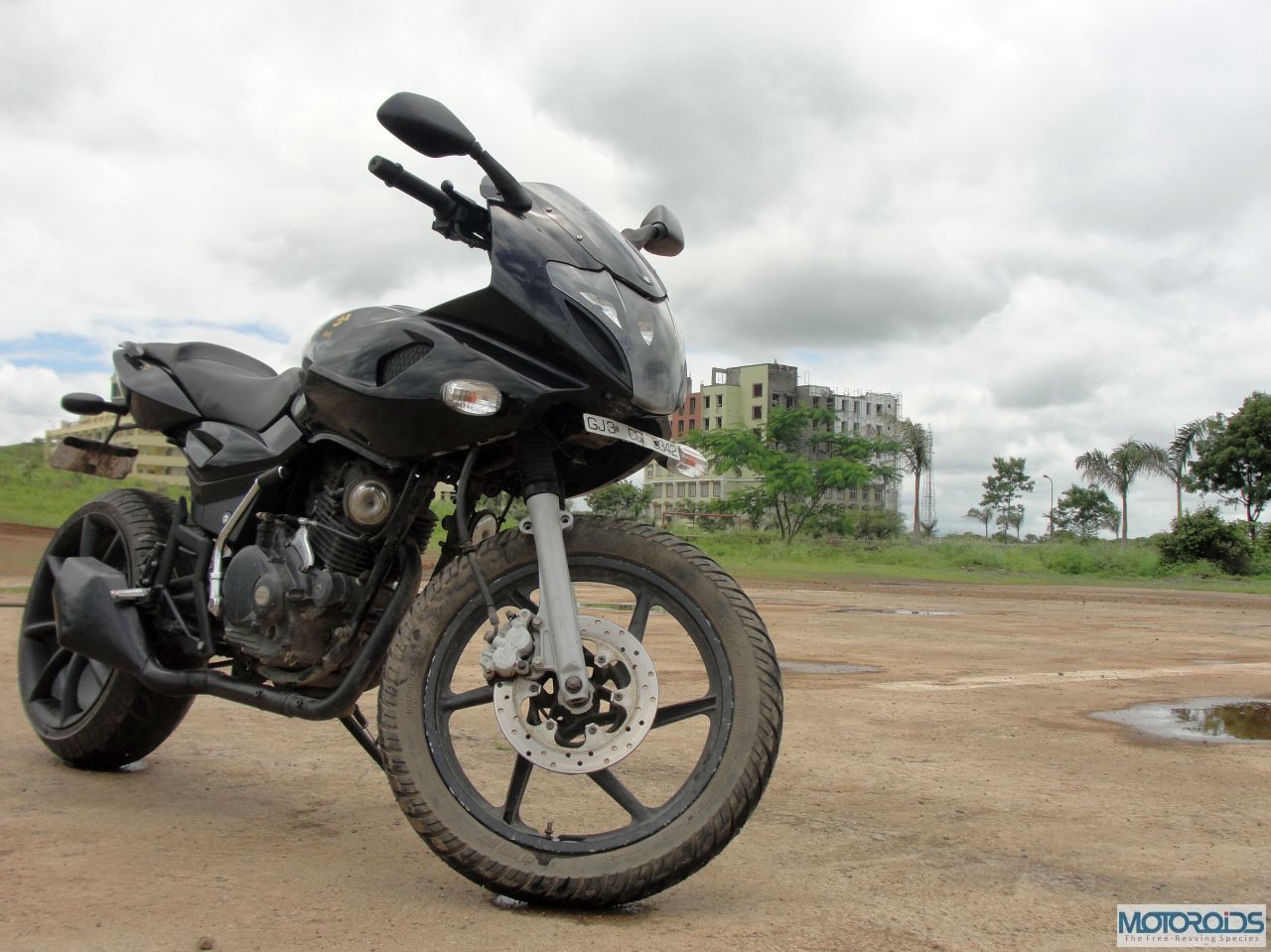 Bajaj Automobiles Limited, the popular Indian bike maker, is known for dishing out at least a dozen variants of every bike in its portfolio. It was a little more than a decade back when Bajaj came up with the Pulsar twins and it will be an understatement to say that the Pulsar brand has done a world of good to the bike manufacturer. The Pulsar brand name, which started with 150 & 180 models, today has the 135LS, 150, 180, 220F and the recently launched 200NS to boast of. Until recently, we also had the 220S, which looked like the now defunct 200. We have always said that the 200NS is an infinitely better product than all other Pulsar bikes that we have seen so far. However, the Pulsar series has been highly successful in Indian bike market and Bajaj has no immediate intentions to stop selling the earlier generation of Pulsars. A recent conversation with a Bajaj bike dealer revealed that the demand for Pulsar 220F, which is only a few thousand rupees cheaper than the 200NS, hasn’t taken much of a hit with the launch of the 200NS. Such is the demand for the Pulsar series of bikes that bike enthusiasts can often be seen upgrading within the same brand. Despite the fact that the older models of Pulsar bikes leave a lot to be desired in some of the areas, the elder generation Pulsars remain to be a favourite among the young biking lot. It can be said that these bikes offer arguably the maximum on Thrill per Rupee factor.

Regulars here would know that yours truly rides a Pulsar 220F on a regular basis and to someone who started riding on a Pulsar 180, these bikes are quite close to the heart. While the rumors of Bajaj planning to discontinue the production of old Pulsars keep surfacing on the web world, there also is a section of bike enthusiasts which feels that the old and fast aging Pulsars will continue to soldier on, albeit, with some updates. Followers of this brand would know that Bajaj loves to play around in its parts bin and the features of more premium Bajaj bikes keep trickling down to the lower variants. While the Pulsar 180 has become as close to the now defunct Pulsar 200 as it possibly can, there also has been news and speculations of a Pulsar 180 with more power and a fairing that belongs to the 220F. Such a version of the popular 180cc street bike had always excited me. The 180 can surely do better with a quarter fairing and better headlamps. And now that I am letting my imagination go berserk, let me add that a monoshock would do a world of good to the mighty Pulsar.

Rutvij Bhatt, Pradip Poria and Kavi Kadecha used to think on similar lines. Bored with waiting for Bajaj to introduce the ‘updated’ 180, they decided to put an end to all the cribs by coming up with their own ‘sports’ version of the Pulsar 180. Christened as the Pulsar 180 StreetSports, the customized 180 from a final year student of Automobile Designing is a sincere effort to elevate the desirability quotient of the fast aging bike. We see a plenty of mod jobs in the fast emerging Indian biking scene but this honest attempt from a group of almost cash-strapped students made us look up and notice. What further differentiates this mod job from many others is the fact that this is no attempt to make the Pulsar look like a cheap replica of the Suzuki Hayabusa. Instead, this bike is that dream Pulsar 180 that many of us have always yearned for.

Still in the penultimate stage of its development, I decided to put to use all my convincing skills to get to spend sometime with my college senior’s baby. 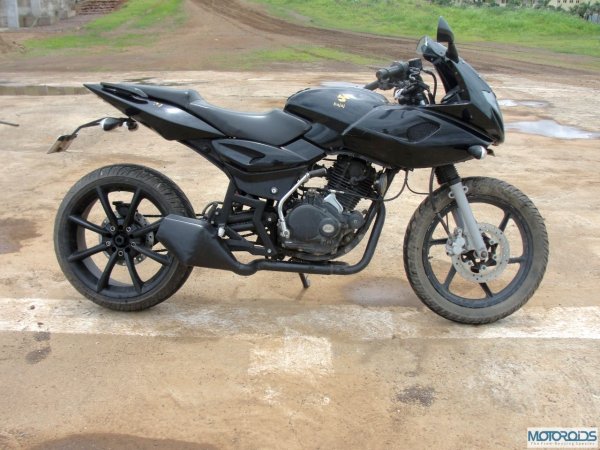 What first started life as yet another Pulsar 180 UG3, is now a close replica of the bigger and more powerful 220F. The bike gets the famous projector headlamps, clip on handlebars, split seats, rear disc brake, new design exhaust, metal rear set foot pegs, sportier rear registration plate bracket and a bigger alloy wheel that wears. . .hold your breath . . a 190 cross section Bridgestone Battlax rear tyre that does duty on some of the bikes that I ride in my dreams. Another not so noticeable change is the single sided swingarm that also secures one end of the Honda Unicorn monoshock. The new swingarm makes the wheelbase of the bike longer by as much as 4 inches!! What this 180 also gets is a lot of attention everywhere you go. We parked the 180 StreetSports next to my Pulsar 220F and suddenly, my trusty old bike started looking like a Splendour in comparison. I know that many of our readers must have started thinking of adverse affect on performance as soon as they read about the 190 cross section rear tyre but it’s my personal opinion that for some, aesthetic impression is more important than blindingly fast speed runs. Still, we decided to make life miserable for the puny 180cc motor but more on that later. 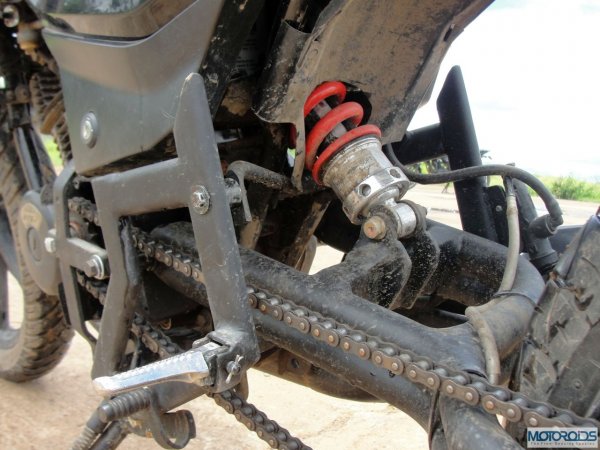 The StreetSports rides on 90/90-17” MRF Zapper at the front and a 190/50-17” Bridgestone Battlax at the rear. The bike gets a Honda Unicorn monoshock along with a longer swing arm. As expected, that badass tyre and the above changes make a world of difference to the ride & handling characteristics of this Pulsar 180. As I mentioned earlier, the mod job is still far from complete and my eagerness to lay my hands on the bike meant that the owner had to hurriedly put to service a Zapper C that was lying around and in all the haste, managed to mount the wheel in the wrong direction of tyre tread. However, as I was in no mood for a full blown test until the completion of the mod job, we decided to go ahead with whatever front tire we had. Further, thanks to the extended wheelbase and that big daddy of all rear tires, the bike had a great stability to boost up my confidence. The lightweight swingarm ensures that the weight has been kept under check and riding along at city speeds is no mean task. I managed a few ‘medium speed’ corners and the bike felt at least as confident as my 220F that rides on hard suspension setting.  The StreetSports was never pushed hard as full blown handling tests have been kept aside until all the mods have taken place. Talking about the ride quality, I will just say that the custom bike rides almost as good or as bad as any Pulsar 180 on stock settings does. The monoshock absorbs most bumps and craters with considerable ease and only the nastiest of speedbreakers proved to be discomforting. This, however, must have to do more with the low profile rear tire rather than the mono.

Safely expect another handling test on the completion of all the mod jobs. 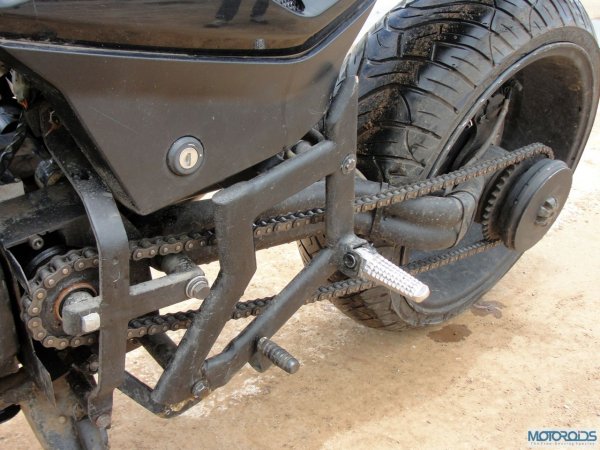 The bike gets new clip-on handlebars and rear set footpegs. This means that the ergonomics too have taken a departure from the factory settings. However, some 50 kms of riding the StreetSports threw in no back/wrist pains. The foot pegs have been moved backwards and together with revised handlebars, the riding posture is biased towards sporty riding. This is surely a welcome change from the commuterish  riding stance of the Pulsar 180 UG3- the base bike here. 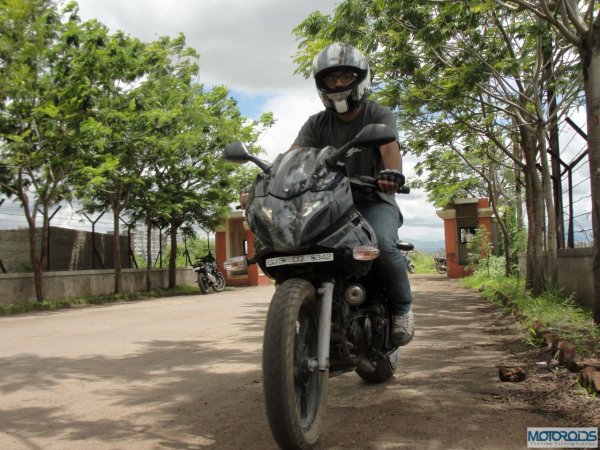 Talking about the things that matter the most, the StreetSports is equipped with a performance air filter and a free flow exhaust. As is obvious, the wide rear tyre has taken its toll on the performance but the bike never felt underpowered. While acceleration figures are nothing to write home about, I can bet my money on the StreetSports if it has to drag race against a Pulsar 150. Talking about drag races, the longer wheelbase should again be of some help over here. While the performance junkie in me wants this bike to be atleast as quick as my 220, the SS seems to have adequate power for city use. 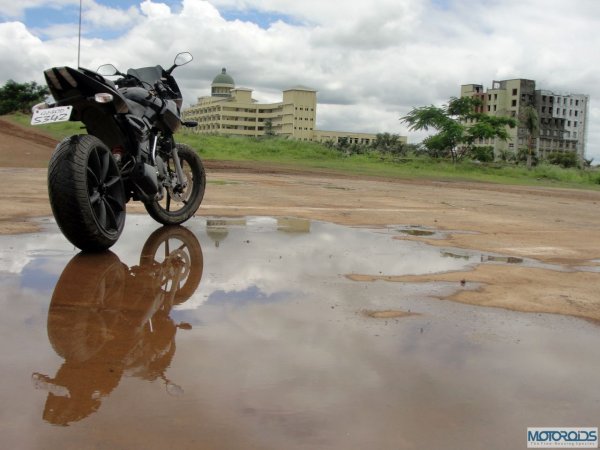 As I keep repeating, not every one of us lives his life a quarter mile at a time. While every street racer and 200cc+ bike owner will argue that mind numbing performance figures are essential for any bike to stand out, aesthetic value still plays a more important role in grabbing some attention in our country. The 180 StreetSports turns out to be an eyeball magnet anywhere it goes and you may also get a few questions thrown at you (Yes, kitna deti hai happened a few times.) This modded 180 seems to be more fascinating than Sasha Grey and this is the kind of bike that your mom won’t ever approve of. Heck! Even my lady love doesn’t wants to see me on this bike. She feels that the bike has an air of wickedness about it. Me thinks that she is just right in describing this bike. *winks.

Contact Rutwij Bhatt (+919762236950) for Pulsar Customizations. Special thanks to Saiprasad Lingayat for helping us review the Pulsar StreetSports