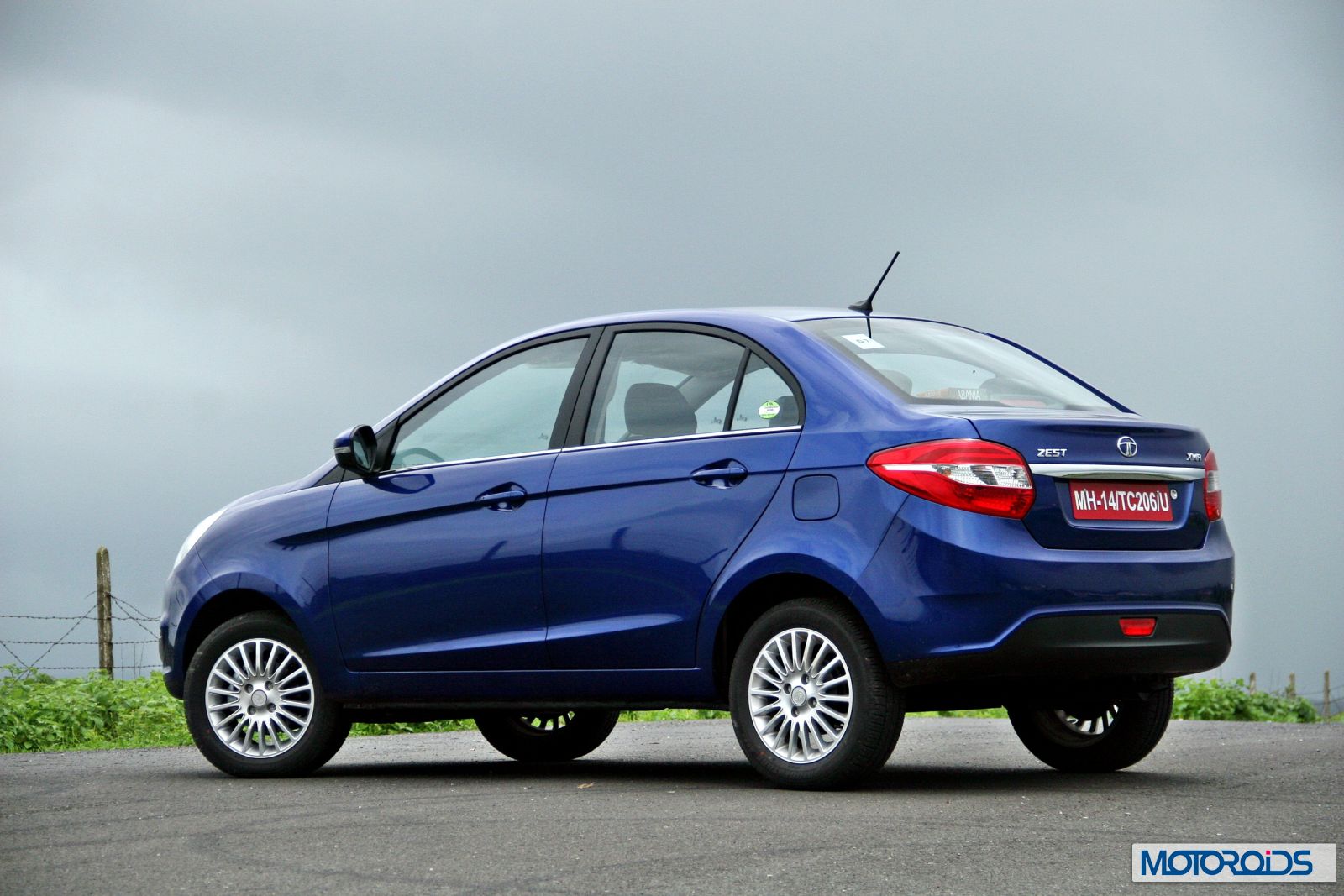 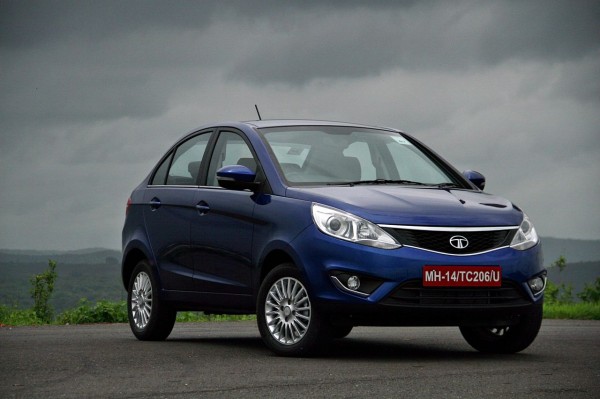 The Tata Zest Revotron, as we discussed in our exhaustive review, breaks new ground for Tata Motors as a regards quality, features and workmanship. The new 1.2 liter turbo engine is a welcome new introduction to the world of underpowered naturally aspirated pint-sized motors. Thanks to our government’s skewed view of environment conservation which gives more weight to dubious engine capacity than more definitive parameters like fuel efficiency or low emissions, we are stuck with blown up lawn mowers which are neither fast, nor frugal, nor green.

But the Revotron engine isn’t the only thing Tata Motors have at hand to show off on the new Zest. The new compact sedan from the Indian car maker is also available in a diesel variant, and with its AMT (Automated Manual TRansmission), it lays claim to being the only automatic compact diesel sedan in the country. 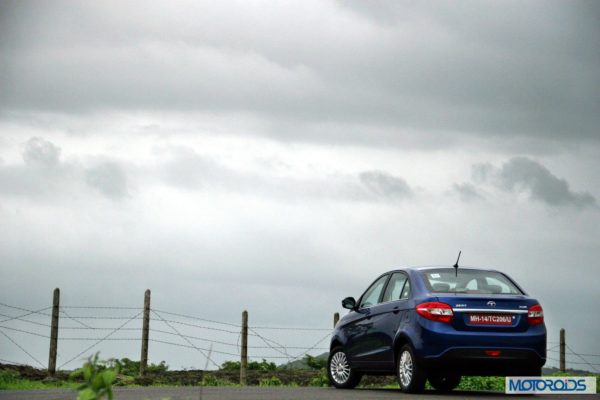 The Zest diesel F-Tronic, thus, will be remembered to pioneer a new segment in the mainstream Indian car industry, irrespective of whether it tastes success or not. We talked about the voids in the Indian car industry long back, and seems like those vacuums are getting filled one by one. It’s good to see the Zest diesel F-Tronic plug another such gap.

So is the new diesel sedan from Tata with an automated manual transmission any good? Let’s talk numbers first.  The Zest diesel is powered by a 1248cc, 4-cylinder, diesel engine with a variable geometry turbo. Peak power is a very healthy 90 PS, available at 4000 rpm, while peak torque of 200 NM is spread across a wide band of 1750-3000 rpm. The power is transmitted to the front wheels via a 5 speed AMT, christened F-Tronic by Tata.

Some changes over the Revotron variant are evident as soon as you put the Zest diesel in motion. First, the steering feels slightly heavier, and also has a bit more feel to it. The suspension feels firmer, and the ride quality is more akin to European cars, thanks to a heavier nose and more loaded dampers. Personally, I prefer a heavier feel on the steering, even on a day to day basis. Daily commuters looking for an effortless drive, however, may differ on that view.  Those who like a heavy, planted feel from behind the wheel are likely to prefer the diesel variant over the petrol version. 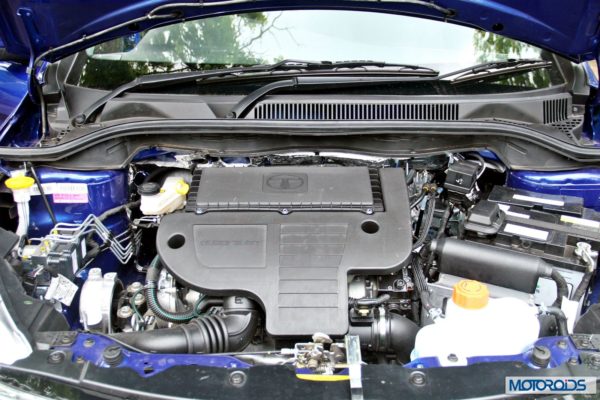 The diesel engine on offer, even with all the power it represents on paper doesn’t quite feel as punchy as we’d have expected.  A fair bit of engine noise filters into the cabin as the revs climb up. Rev hard, and the noise increases as the needle climbs up a little above 4000 rpm, turning red in its unique fashion before the limiter takes control.  There is performance on offer, but not in the punchy, addictive sort of a way you would expect from diesel motor with 200 Nm of torque.  This car would probably have felt more enjoyable with a fully manual transmission.

In gear acceleration is fairly strong though extracting the maximum juice out of the motor is difficult with the AMT transmission. Now, an AMT is a quick way to automate the transmission system on a car. Unlike a torque converter unit, or the more modern twin clutch auto transmissions which are lightening quick; an AMT’s raison d’etre is to rid the drivers from the hassle of shifting gears in a cost-effective manner. There are advantages associated with AMTs as regards cost and convenience, and a compromise as regards performance – and it’s quite evident too. 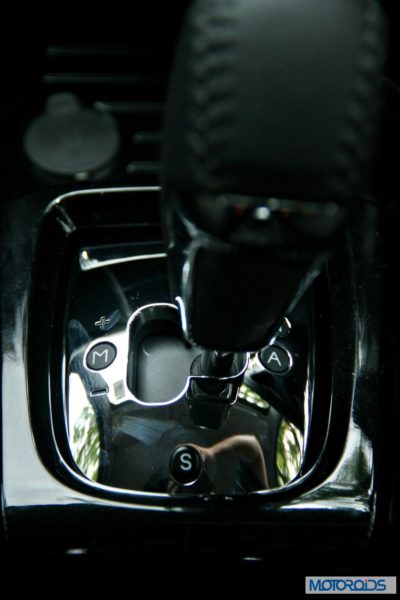 While the new F-Tronic AMT transmission works fairly well as long as you are cruising steadily on a highway or sauntering around at a steady city speed, it doesn’t quite respond very accurately to throttle inputs. Part throttle at a constant speed would sometime let the revs build, while on other occasions you would experience the system kicking down two slots to bring into play engine braking and result in a jerk.

In the normal drive (or the ‘A’) mode, you have to be very careful with throttle modulation. Only very light to light throttle inputs are responded to with a linear increase in engine speed. Even a little extra weight on the right pedal witnesses the transmission respond in an inconsistent manner.

There are two workarounds to the variable shifting habits of this AMT though. Either put the transmission in manual mode, where you can use the transmission like a Tiptronic and shift gears manually, minus the hassle of a clutch. This mode gives you maximum freedom to up- or down-shift at a chosen rpm, as the transmission won’t upshift until it reaches its redline (or should we say red-needle) of 4400 rpm.

Another way is to press the little S button below the drive selector, meant to represent the much marketed ‘Sport’ mode. What this mode does is prevent early up-shifts, and ensure that the engine speed will increase more predictably upon depression of the accelerator pedal.  You can modulate the throttle for being in the desired gear better in that way, as the system holds the rev all the way up to 4000 rpm in this mode before upshifting. 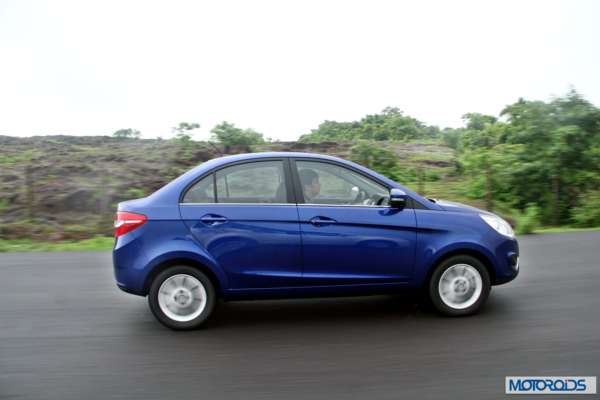 Being an AMT the response from the transmission is rather slow, and you have to be judicious about your overtaking maneuvers, especially on roads without a median. Response to sudden throttle inputs is not very quick, and you do find yourself staring into a momentary pause upon burying the pedal while trying to overtake the odd MUV ahead. 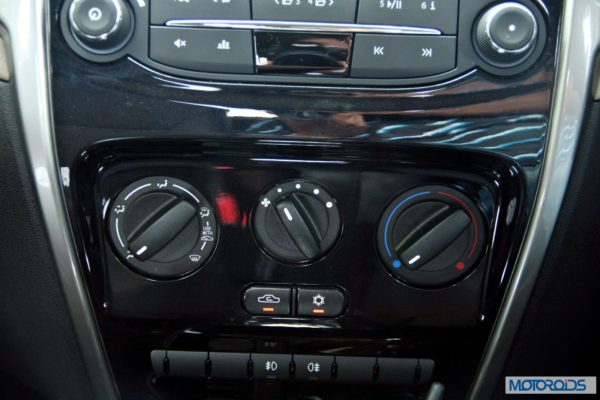 We drove the XMA variant of the diesel Zest, with F-Tronic AMT. This variant didn’t have the daytime running LEDs of the Revotron unit. The lights were duly replaced by a satin silver insert. The Harman infotainment system inside the cabin was also a non-touchscreen unit with single color display. Some functions of the Harman infotainment system such as rear parking assist, speech recognition, image viewer and smart phone integration are not available on this basic version. The good news, however, is that the sound output of the audio unit remains the same for both the systems with 8 speakers delivering fantastic sound. 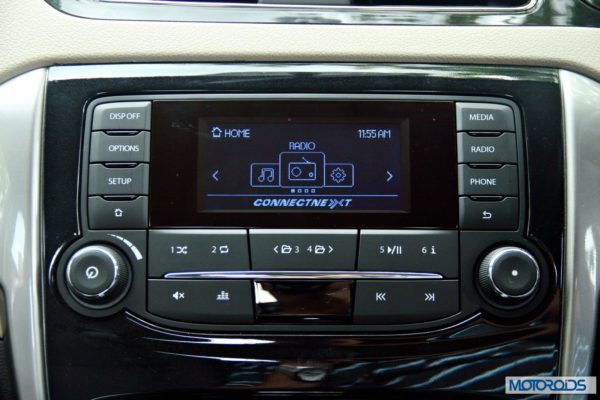 The F-Tronic AMT diesel also loses out on burglar alarm, rear defogger and airbags as regards safety and security.  The 18 spoke alloy wheels on our test diesel car were also a different design as compared to the 8 spoke alloys on the petrol Zest.

The Zest F-Tronioc AMT may not be perfect, but it sure as hell is functional. Being a Tata product, the Zest is bound to be priced aggressively, and with AMT available, we can already picture a whole bunch of daily commuters jostling to drive home one. It’s not meant to give you the kicks, but if you are a Metro dweller who fights a battle with the choc-a-bloc city traffic every day the Zest AMT F-Tronic is a blessing from above. Sure there are petrol automatics available on the market, but the running costs are a big issue with their dismal efficiency. The Zest AMT should offer the right mix of economy and convenience that a whole bunch of urban commuters have been waiting for.

Next Page for Tech Specs and Image Gallery>>>