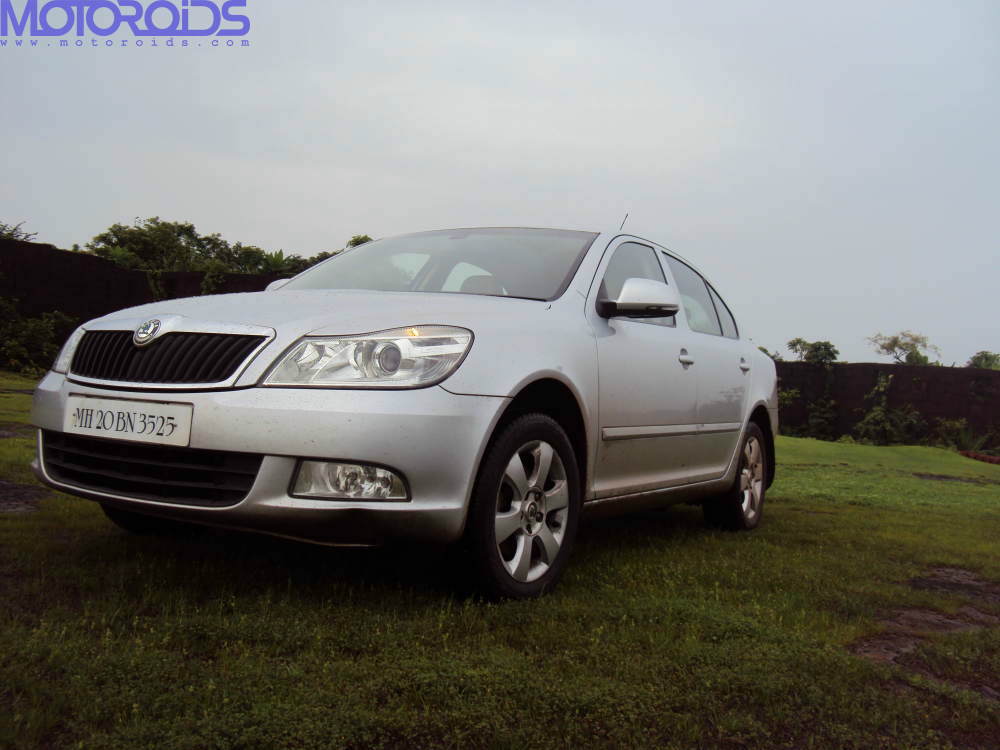 The new Skoda Laura RS is around the corner, creating a lot of excitement among the Czech brand’s fans. But the current model is still far from dated, and is quite a handful for its competitors. We experienced the brilliance of the Laura 2.0TDI DSG (140PS) first hand in a 1000km round trip. Here’s a brief drive review, substantiating why the Laura is considered one of the best cars across segments.

We started off from Mumbai with rains lashing the city. The visibility was not more than a few meters, and with about 300km to travel, my insistence to carry on with the plan almost bordered on to arrogance and adamancy. But a plan is a plan. There cannot be a more spineless reason than the fear of the unknown to bundle a well thought out trip.

So we started off regardless, only to realize that with a car like the Laura more than half our worries were shown the bin. You see, the biggest concern you have while driving in incessant rains are visibility, stability and reliability. And the Laura delivers on all three counts, with addictive power and the magic of DSG thrown in as bonus.

From the moment you get behind the cockpit and the car’s wheels turn for the first few times, you somehow know that this is an extremely accomplished car. There is a sense of unparalleled solidity about this Czech machine which can otherwise be experienced only in its German counterparts, the originals, who have endowed most of those qualities to her. The Laura feels like an extremely heavy car from inside, in a good sense. Solid as the Rock of Gibraltar, the wheels cling to the tar like a thirsty leech would on soft baby skin. That it won’t slither or slide come what may is a feeling which only gets stronger as you log on more kilometers and reach closer to testing its limits.

I was driving the 2.0 TDI variant with 140PS or power and more importantly, 320 Nm of torque (there’s another 2.0TDI variant with 110 horses and 250Nm). Now those figures may not sound like too much fun, but in the real world, in a well engineered car, they are enough to have an intoxicating effect on you. The 2.0 TDI diesel engine in question here is quite a delightful power plant. It’s turbo with self-aligning blades works well to iron out the lag usually associated with such engines to a respectable level. You can trundle along with no splutter from as low as 1000rpm, but when the turbo really kicks in at around 2000 rpm, the gentle shove into their backrests in enough to let the passengers understand that it’s a special car they are travelling in. The Laura weighs all of 1.5 tons, and the acceleration you get from that engine just defies the odds thrown by all that mass.

For the driver, the steering wheel falls perfectly to the hand. The seats seem to have been designed by an orthopedic surgeon as even for someone suffering with chronic backache like me the 300 km drive was more comfortable (definitely more refreshing) than sitting on the couch in my home and watching TV. Of course, the fact that there was no clutch to ride on helped a lot, but in most other automatics, especially on highways, it’s more of an irritation than convenience. Not with the DSG though. Not without reason is the dual-clutch transmission considered one of the best things that have ever happened to the automobiles.

The 6-speed DSG with Tiptronic manual shifts was bang on the money, responding not just quickly but intelligently to the engine revs and the throttle position to deliver a fuel efficient, yet swift drive on my rather sane way to Chiplun. On our way back to Mumbai, with relatively clear weather I put it the ‘box in the Sport mode and the Laura as we call her defied her name to become a different animal altogether. Odd as it may sound, but she was oozing testosterone with the engine given the freedom to rev hard. The Sport mode keeps you bang into the middle of the meat, delivering stonking power and torque, and keeping you equipped with enough grunt to overtake almost anything on the road even with the smallest overtaking windows on undivided highways (Mumbai – Goa is one). It’s with machiness like these that you understand how powerful cars are so much safer than their lawn mower counterparts. And it’s with cars like these that you understand that it’s time for the good old manual transmission to rest in peace. It’s a just a matter of when such transmissions can match their manual counterparts for cost. Their superiority is no more in question, as it used to be once. Thank God and VW for that dual-clutch wizardry called DSG.

Now, the first 150 km on your way to Goa from Mumbai are quite taxing. Especially on weekends. There’s ample amount of irritating two and three wheeler traffic on the road, with heavy trucks which seem stationary until you pass them thrown in good measure to keep the fun alive. Then you have the maniacs behind the wheel of state run transport corporation buses who think it’s perfectly OK to overtake a more powerful car, which is already overtaking an almost stationary Tata truck. So what if you are in the correct lane and flashing from the opposite direction to announce your existence and terror. What are the fields for? Drive into them. Damage to the car? What are the insurance companies for? A few broken bones? Don’t you have Mediclaim, you stingy sicko! ‘Whoa, that was fun’, says the contented bus driver after making almost a dozen guys feel their balls in their throats after every such adventurous overtake. He’s driving a state-run bus, you see. It’s not his own property, so he doesn’t have to pay for the damages. He thinks of himself nothing less than one British James Bond. And the license to kill too was duly presented to him by the local RTO. Add some exposed rockets in place of the ORVMs, and these guys would be happy to explode you out of their way rather than making you drive through the fields. And the adventure doesn’t just end with the state run buses. There are plenty of crater-sized potholes to help you end up with a punctured tyre or a busted suspension, and spend the night under the sky, in the beautiful monsoon rains at no extra cost.

Jokes apart, such conditions can be quite irritating. First because riding the clutch is never fun. Second because you’d be swerving a lot more than you should to avoid those stupid potholes. A wife who is sensitive to even minor undulations filtering in makes the situation all the more interesting. To the Laura’s credit, the ride and handling is as astounding as the engine-tranny combo, and makes for a delightful driving experience even in worst conditions. We were two couples travelling together on this trip, with me at the wheel and the other guys in the passenger’s seat. And it was nothing short of a phenomenon to realize that my wife sitting at the backseat didn’t complain once about the rough road surface. There can only be two reasons behind this. Either she was possessed by a tranquil spirit, or the Laura has an exceptionally good ride. I would go with the latter thought as the silence didn’t persist once she stepped out.

Minor undulations are absorbed with adeptness to render them non-existent. Even the bad ones are taken into stride with just a muffled thump managing to filter into the cabin, with the car not unsettling one teeny bit. It’s only the really vicious, sharp edged, a meter deep and two meter wide ones which could really jolt this car. The ‘built like a tank’ phrase is now a cliché which is often used for the big Skodas by us auto journos. Drive one and you would know why. Remember the solidity talk at the beginning of this writeup? The feeling gets stronger and stronger with every kilometer you log. Heck, the doors sound like they weigh a ton each as you shut them. By all means, the Laura is a well-engineered, solid car with no corners cut.

There are negatives too. The backseat head and leg room could have been marginally better. Tall guys have a problem with the Laura’s backseat. Another omission is a USB jack. Hell yes, I am rich, and can afford original CDs, but I want the convenience to carry and play downloaded music, 500 times more than I can carry on the CD in a package 1/50 its size. Yes, I am a thief, yes I am a filthy downloader, but so are a billion others driving in those sub-5 lakh rupee cars. Why discriminate? Especially with that music system that sounds like a million bucks? It’s an omission which needs to be rectified immediately.

Talking of safety and other features, the Skoda is leagues ahead of its immediate competitors. If we list all the features of the car here, probably you guys would get bored, as it’s overhwelmingly long. A better way, probably is to have a look at them here after you have read this review. From ESP, to six airbags, to TPM, to ASR to self levelling lamps – you name it, and the thing has it. Absolutely no complaints on the features front. Heck, the boot can swallow three of me without a burp!

Apart from a few minor things there’s hardly any fault you can find with this beauty. It’s as brilliant a driver’s car as it’s a family sedan. Yes, it’s expensive, but you don’t have another car in its segment which could match it for its capabilities. Hopefully, the new VW Jetta would present itself as a real competitor, but until then the Laura, as always is the king of its ring.

PS: Spares costs, after sales customer experience and dealer network still remain some of the issues with Skoda, but that doesn’t make the Laura any less delightful a machine. It’s a brilliant, brilliant car.