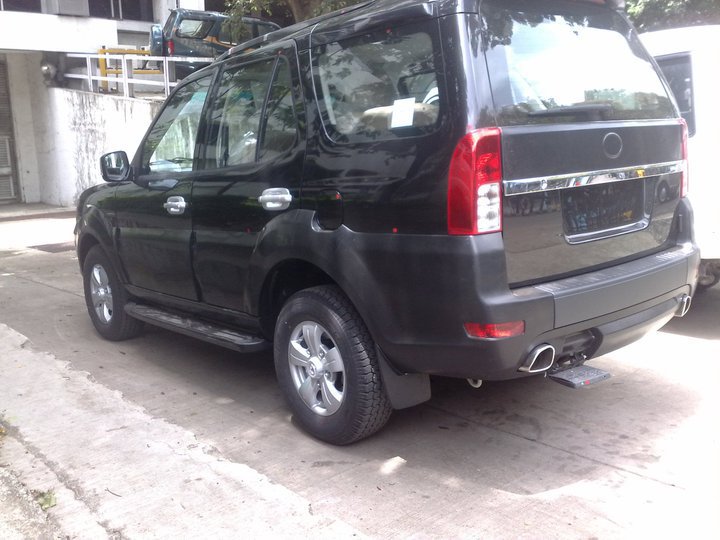 Motoroids, as most of our regular readers would remember was the first car blog to break the news of the new generation Tata Safari, or the Safari Merlin, about 8 months ago. Although the Safari Merlin has been spied in a camouflaged state many times since then, the Indian carmaker has managed to keep the new car hidden from prying eyes quite commendably. Until now that is. The first completely undisguised images of the car are now out.

A keen look at the picture suggest that the new Safari may, after all, not be all new, at least in terms of external design. The rear three quarters’ view suggests a striking similarity to the design and body of the current generation car. The window between the C- and D pillars is unambiguously reminiscent of the current Safari. Clear similarities with the current version can be seen when you have a look at the profile of the car as well.

Changes too are visible though, most strinkingly in the form of the two chrome tipped rear exhausts, and the chrome slat running across the tail gate. The spare wheel in the new model has gone below the chassis leaving behind a clean tail-gate. The loading lip is positioned niether too high, nor too low, and there is a stepping flap below the bumper too to allow easy ingress for the rear passengers. What this suggests is that there will be two facing benches after the third row of seats, rather than a single third row.

All in all, the look from the rear end doesn’t look too fascinating. There clearly is resemblance with the current gen model, and all of us who were expecting a complete visual makeover are slightly less excited about the product now.

The real changes, however are expected to be under the skin. The Safari is expected to borrow the Aria underpinnings, which, as we have experienced earlier is quite an accomplished piece of kit when compared with the Safari’s current setup. Powering this behemoth would be a new 2.2-liter DICOR engine putting out 140horses and 320Nm of torque. Those figures are par with the segment and should make the Safari Merlin a fairly competent car on the road. Both 4×2 and 4×4 variants will be available. Aria’s tech wizardry including Traction Control, Airbags and all the rest of the zing is expected to make it to the Safari as well, although lower spec variants should also be available.

We’re expecting a launch in September 2011. With the Mahindra World SUV also around the corner, which of the two traditional rivals (Mahindra / Tata) do you think would be able to come out with a better product. Given the info you have on the two cars today, which one would you pick of the two? Do let us know. Here’s a spy video of the car