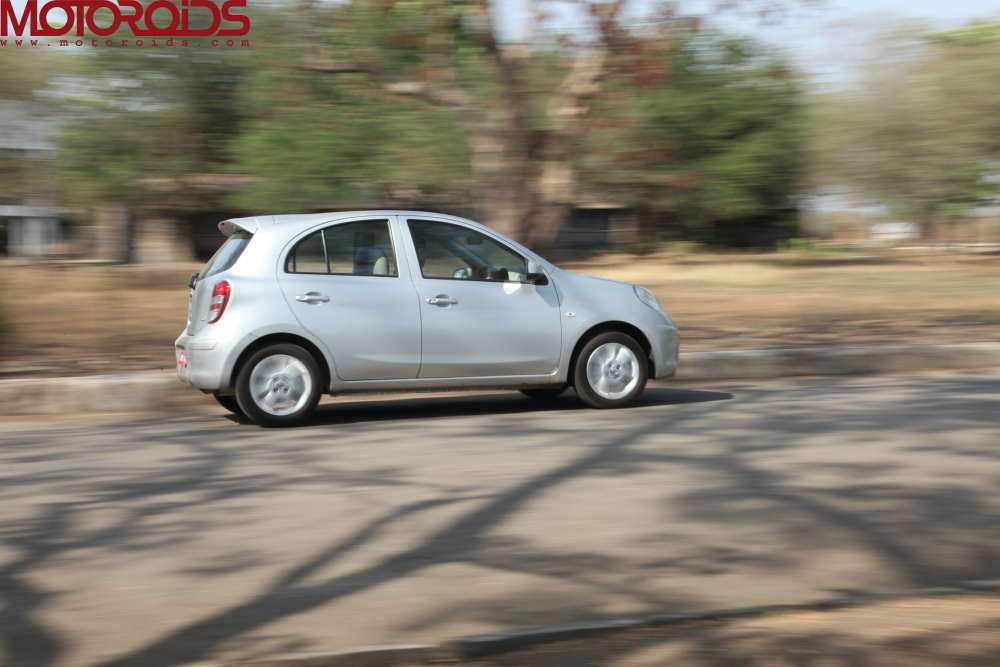 The diesel car market in India is suddenly on fire. Apart from the modern diesel engines matching and exceeding their petrol counterparts in terms of performance and fuel efficiency the fast escalating fuel prices are another reason why the balance seems to be shifting in diesel engines’ favor. More and more people are buying diesel variants of even small hatchbacks, a trend which is rather new. Suddenly we see the whole market cluttered with diesel options in a segment which hardly had any diesel players only a couple of years ago. The Micra diesel too resides in the B-segment diesel hatch category, and should we say it’s one of the more accomplished contenders of the lot.

Since we have driven and reviewed the petrol engine Micra earlier, along with a comparo with the Figo, we’d primarily focus on the engine for this particular review. The 1.5-liter DCi diesel unit on the Micra is the same engine that powers the Mahindra Logan, no, Verito with plenty of torque, great refinement and incredibly linear power and torque delivery characteristics.

To start with, the engine feels very quiet and vibe free from within the cabin, as you turn the ignition key on, oops, press the power button. There is, of course, some noise if you compare it with today’s modern, super silent petrol mills, but it’s much quieter than its other diesel counterparts. The top end diesel variant comes equipped with a first in its segment proximity sensor enabled key which facilitates keyless entry into the cabin. Then there is the fancy push button start on the top end version – again a segment first.

Put the car in motion and you get to experience the beauty of this engine. Now a peak power of 63bhp may not sound like a lot, but bring in the 160Nm of peak torque at a lowly 2000rpm and thrust would never be a problem. More than outright performance, the prime virtue of the Micra diesel is its unmatched progressive power and torque delivery. It doesn’t feel like a car powered by a turbo diesel at all, with power and torque building up more like a petrol power plant. This makes for incredibly good drivability. Toque is available from as low as 1200 rpm – you won’t hear the Micra diesel spluttering at even the lowest revs. It pulls with reassurance from the bottom of the rev range, and delights you with a progressive surge. If you, however, wish to rev high and hard, this is not the car for you. The Micra excels in the low and mid-revs with is fuss-free pulling prowess, making for a terrific city car. Add to those virtues one of the class leading fuel efficiency figures of 23.08kmpl, and the Micra diesel makes a lot of sense.

The gearbox is quite good too. Although not the best is the business, the quality of shifts is at par with the class. The grouse here is the clutch, which feels slightly heavier than ideal, and may bother your left leg if you travel through congested, slow moving stretches often.

However, to nullify the adversities faced due to the slightly heavier clutch, the Micra offers steering which is both smooth and light. It’s really a delight to use in tight spaces and makes light work of maneuvering the car. Add to that the smallest turning radius in its class, and the Micra diesel shines as a city car.

The Micra is a solid, planted car at fast speeds. It feels sturdy and inspires reasonably good confidence by virtue of its low stance. The steering, however, oriented primarily towards city driving doesn’t quite feel weighted enough, especially at high speeds. The steering wheels doesn’t quite stiffen up with speed. The composure is pretty good on straights, but things get slightly squishy around corners, where the Micra’s comfort oriented soft suspension allows body roll to seep in.

The Micra’s cabin is the same as the petrol version’s, except for a few very minor changes. The gear knob is different, and so is the steering wheel – the difference in the steering wheel being only that of a silver panel. Another difference is that the twin glovebox found on the petrol micra is not available in the diesel variant. The Micra’s big windows offer great airiness and augment the feeling of liberal space. Legspace is reasonably good too, and makes for a nice, comfy and airy place to be in with very good visibility.

The diesel Micra top end XV variant gets a driver side airbag, climate control and alloy wheels as standard. Omission of ABS, even as an option, however is a letdown.

At around 6.2 lakh ex-showroom, the Micra comes across as a slightly more expensive car when compared to the others in the segment such as the Ford Figo and the Suzuki Swift. However, some of the virtues of the Micra such as its seamless power and torque delivery, terrific drivability and for those who are looking for some distinction, its charming retro looks should help justifying the price tag. All in all, the Micra diesel may not be a value seeker’s delight, but it’s an accomplished city slicker nonetheless.