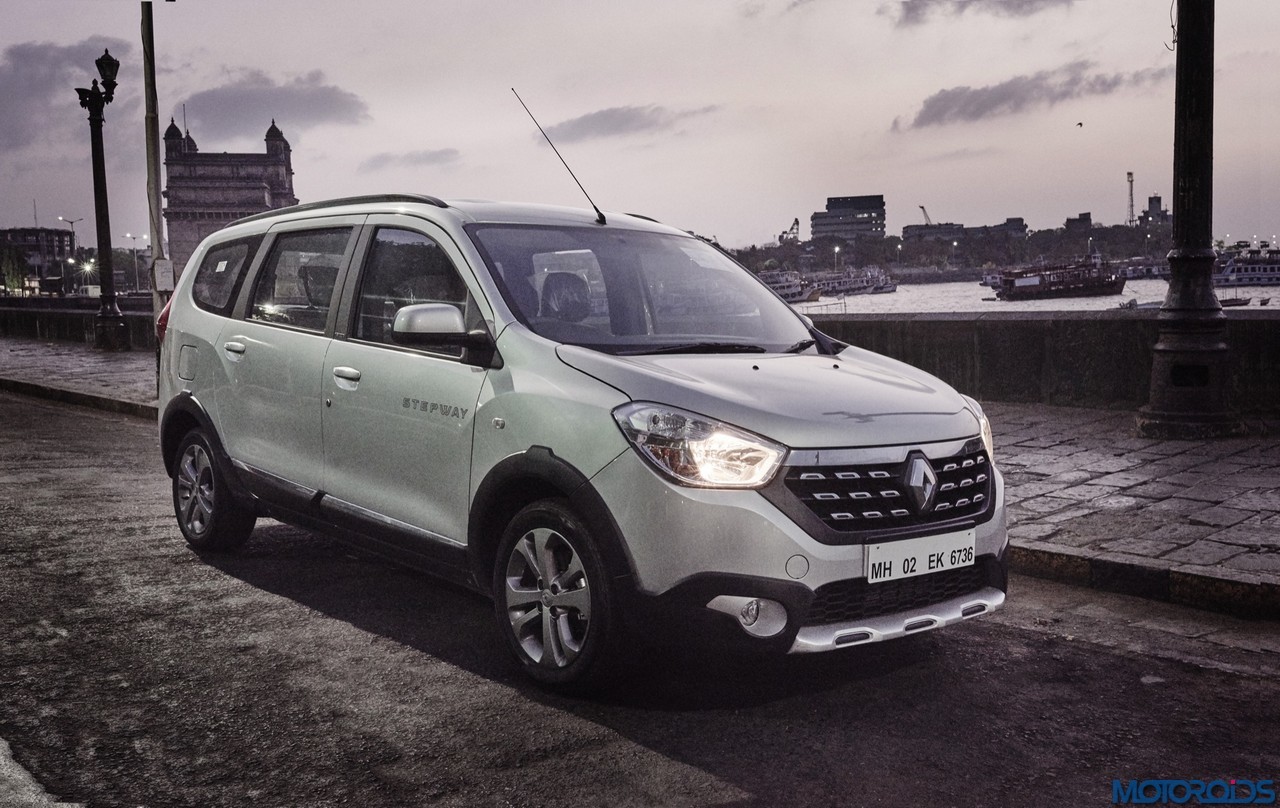 I’ve always wanted to go sailing. And thanks to Renault India, that dream came true. Well, somewhat. As a part of the new Lodgy Stepway media drive, Renault India took us on a sunset cruise on a yacht in the backdrop of the Mumbai skyline glowing in the fleeting light of the setting sun. 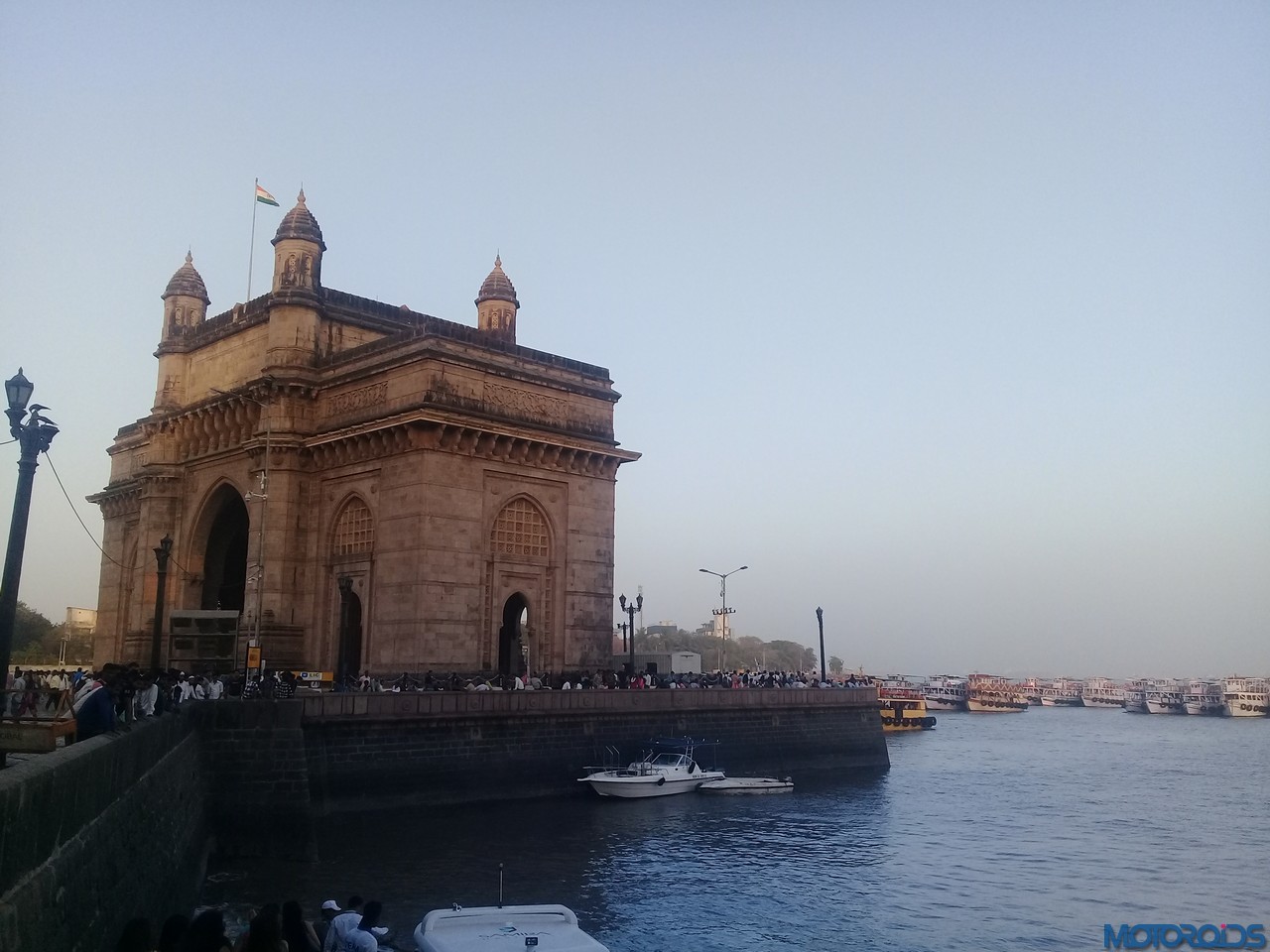 We gathered at the Gateway of India, Colaba for our experience to begin. Life vests on, we were sent off on a motorboat to our designated yacht which was anchored a little far off in the bay. Atop the yacht, it was a pretty serene feeling. 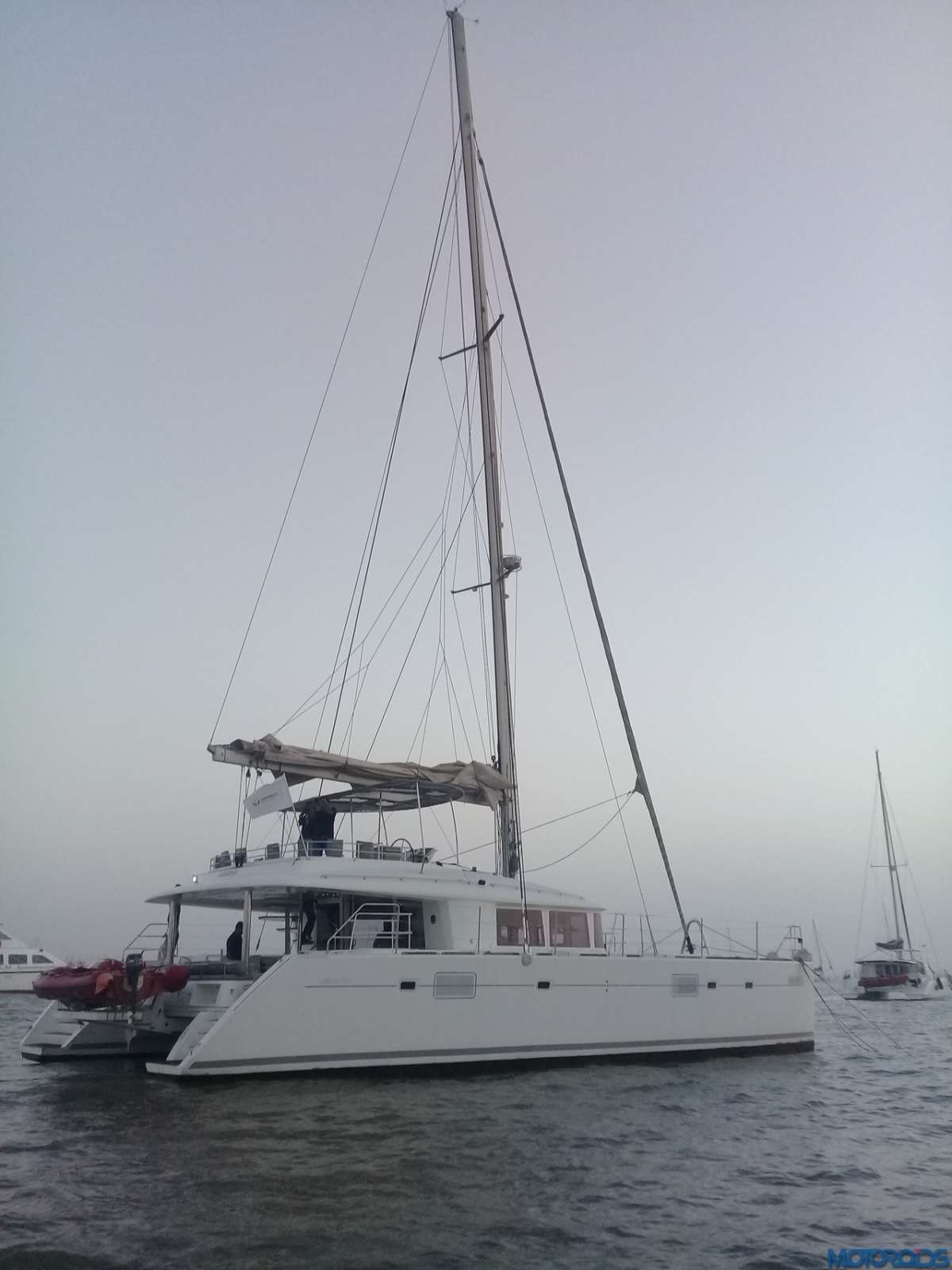 The winds were brisk, while the bobbing and pitching were oddly therapeutic. Sails up, we set off for our cruise. As the sun was setting, the views got intense. In the distance, the Mumbai skyline looked electrifying, and the waters glowed with the reflection of the city lights. 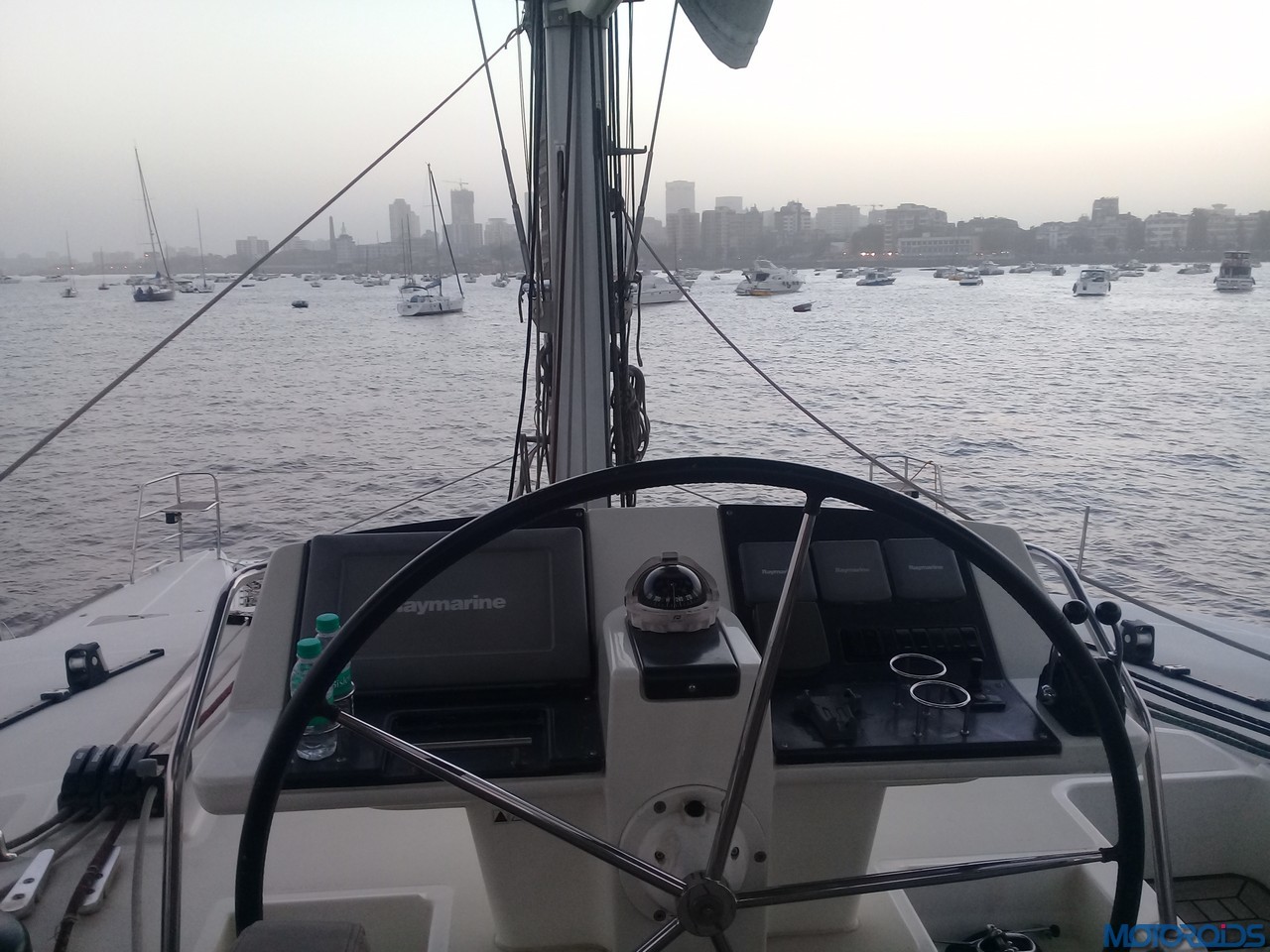 The camaraderie on board was great too, with great conversations and good food. The yacht was an impressive piece, standing elegantly on the waters with its sail up. It even featured a cosy bedroom inside, with all the modern amenities like running water and a full-blown washroom. 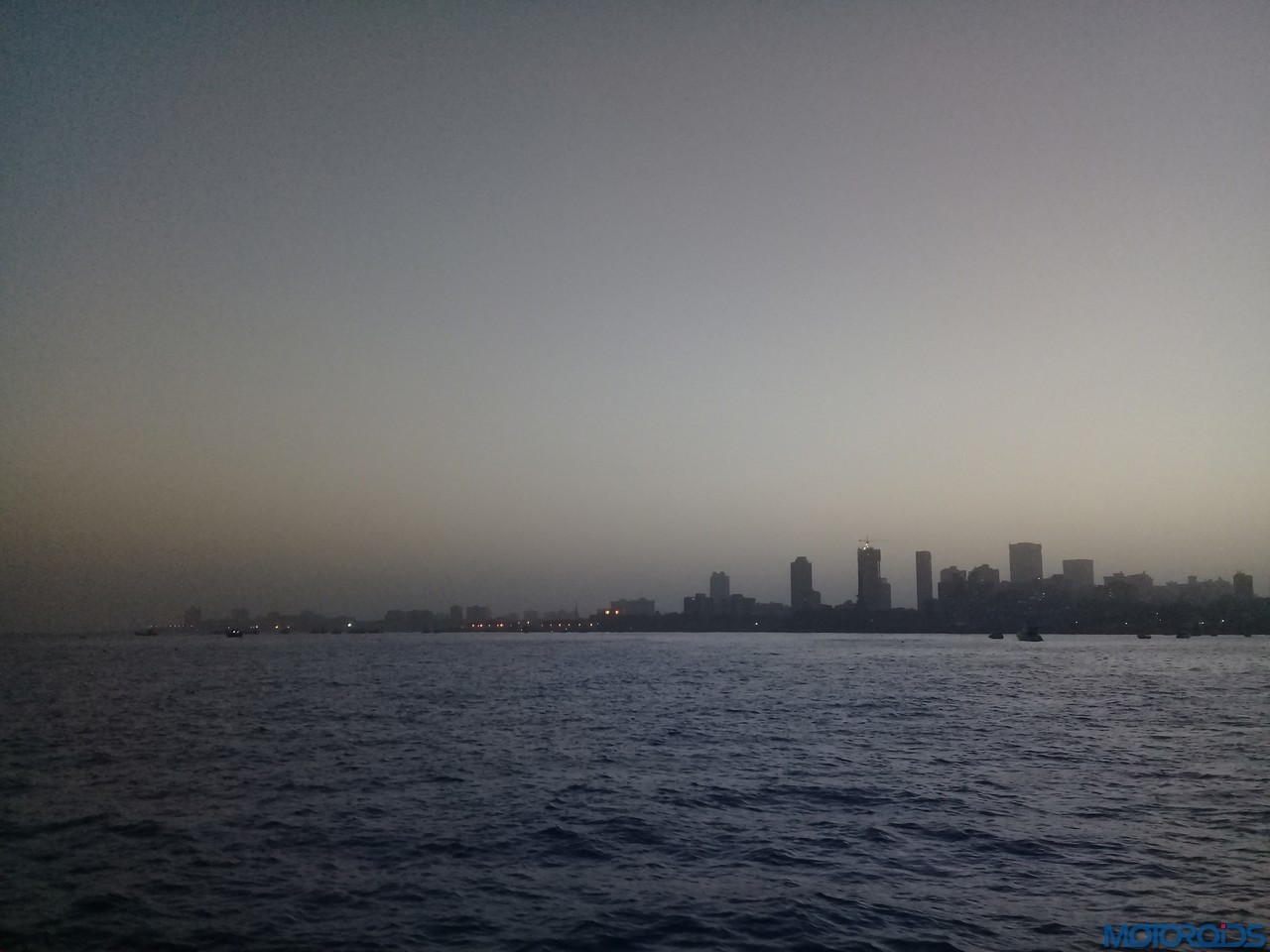 After the cruise, it was time to sample the Renault Lodgy Stepway edition on the streets of Mumbai at night. The Stepway tag adds 16 new enhancements to its exteriors and interiors of the MPV. On the outside, the new Lodgy Stepway gets a new front grille with shiny studs and redesigned front bumper with a faux skid plate. The MPV gets new 16” Panache Metal Alloy wheels as an aesthetic enhancement. The car also gets stylish dark metal finish roof rails and STEPWAY decal above the front fender. 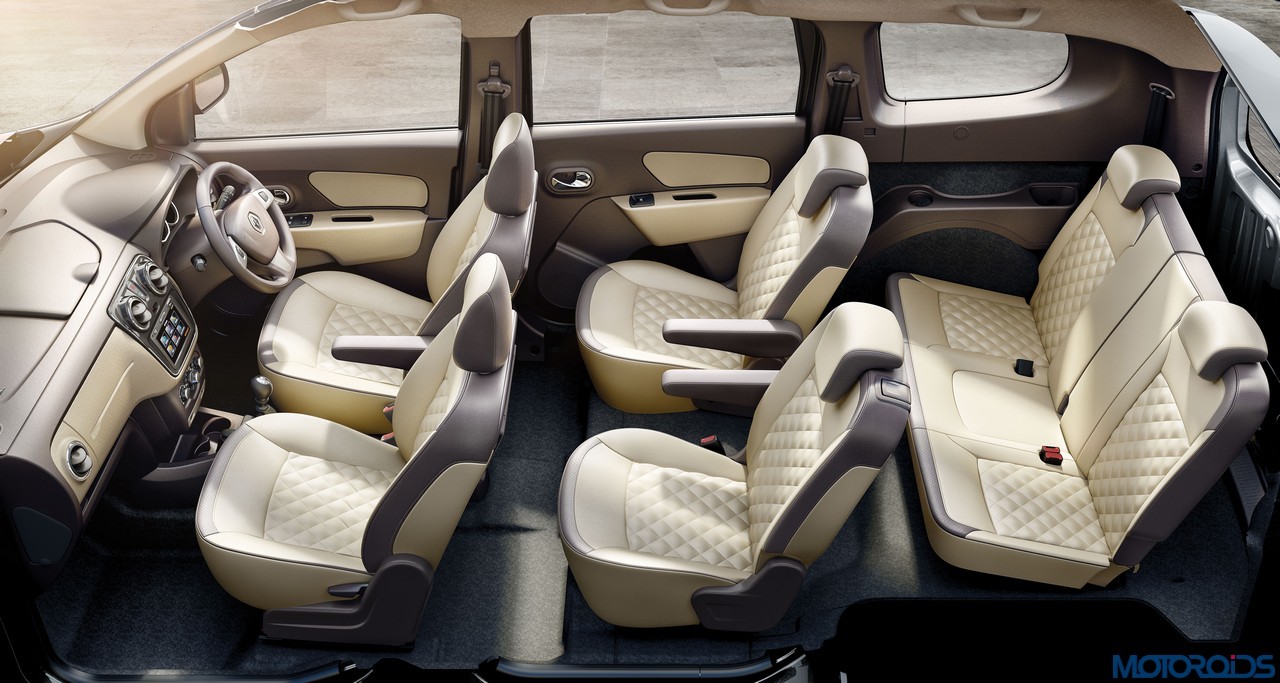 The interiors of the Stepway are more or less similar to the standard Lodgy, apart from a two-tone dashboard bearing a piano black centre fascia with chrome surround. The Stepway also comes with 7 & 8 seating options in Gris Fume and Beige Alpaga leather blended upholstery. Step inside, and the Lodgy Stepway is all about the cavernous space. The driving position is high set and commanding, giving a clear view of the outdoors, helped by the large windows all around. The seats are comfortable too, apart from a slightly cramped third row. 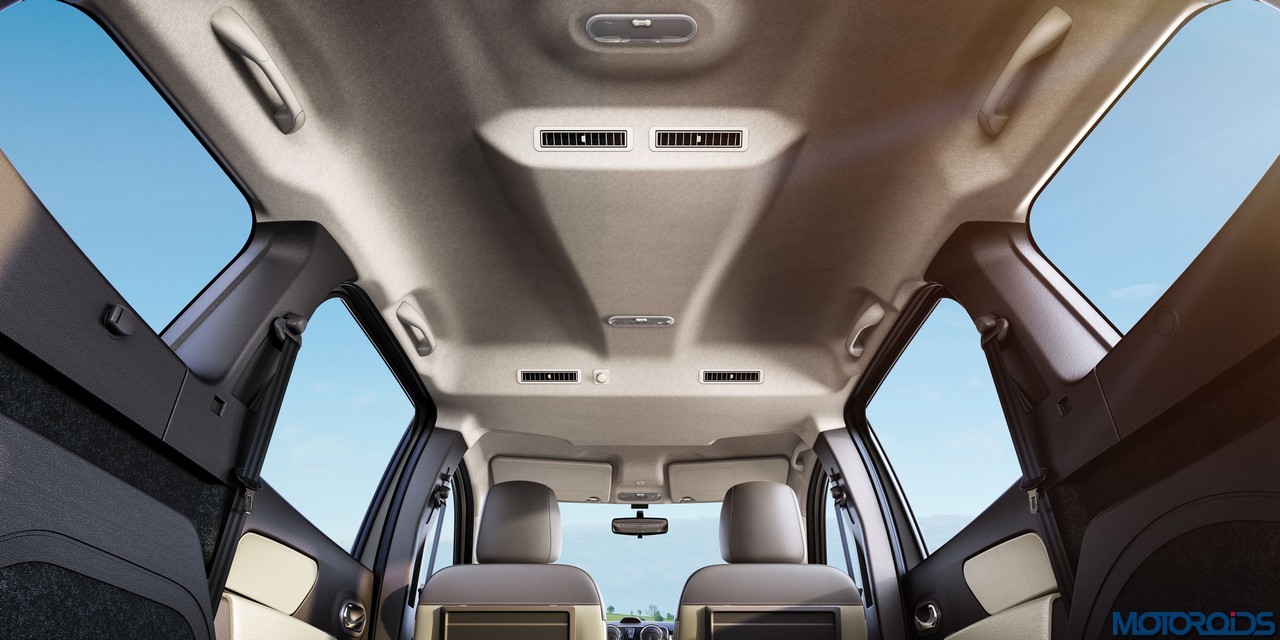 The interiors offer 56 combinations of seat versatility and smart storage spaces for all 3 rows. The 2nd and 3rd rows offer tumble-and-fold seats with 60:40 split, while the 3rd row can be folded easily or even removed to accommodate extra luggage. Boot space stands at 207 litres with all three rows upright, and increases to 589 litres with just the third row tumbled. With the third row removed, boot space increases to a cavernous 759 litres. 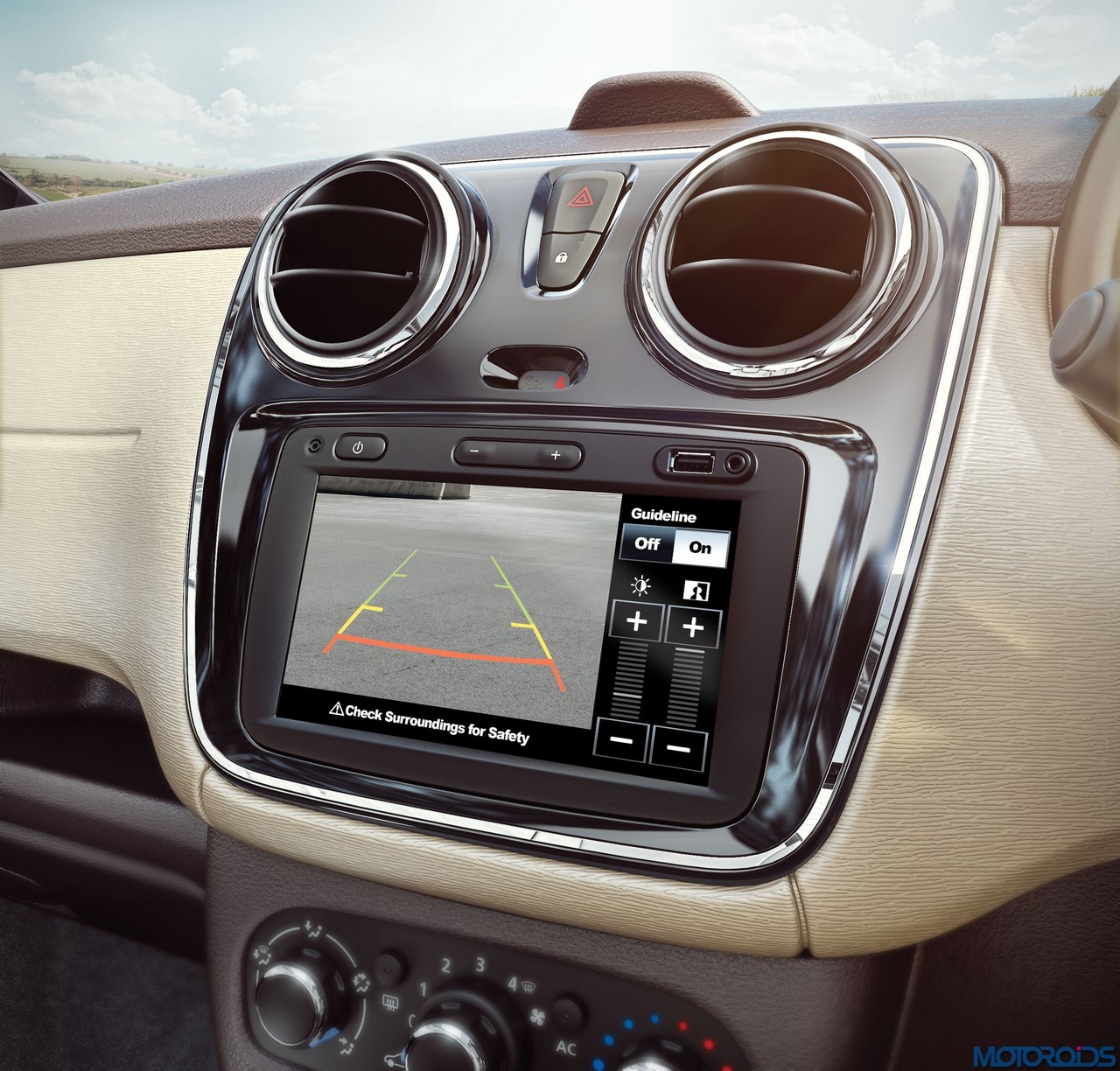 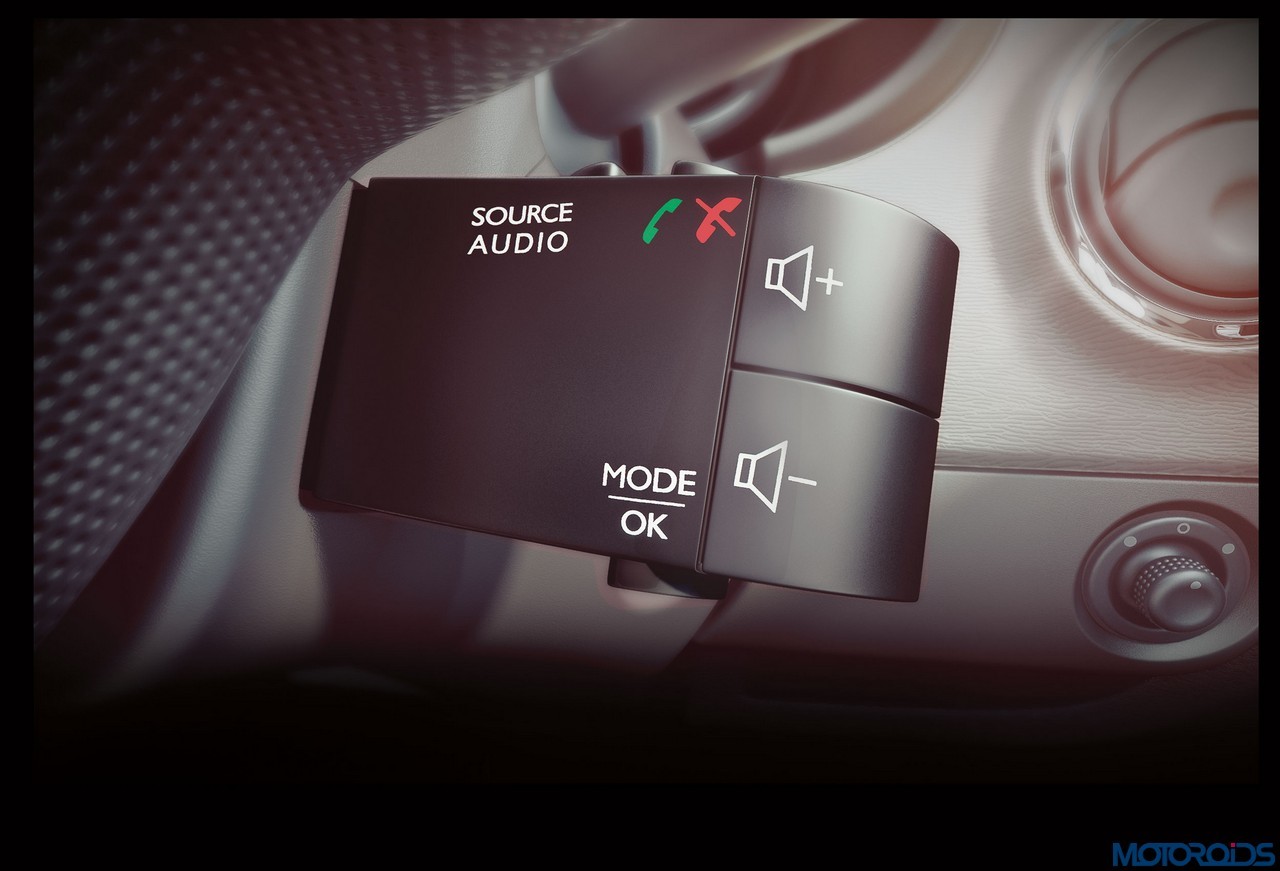 Safety features on the Lodgy Stepway include ABS with EBD and Brake Assist, front driver and passenger airbags, rear wiper, washer and defogger available from RXL Stepway variant onwards. The car also gets cruise control with speed limiter as a convenience feature. 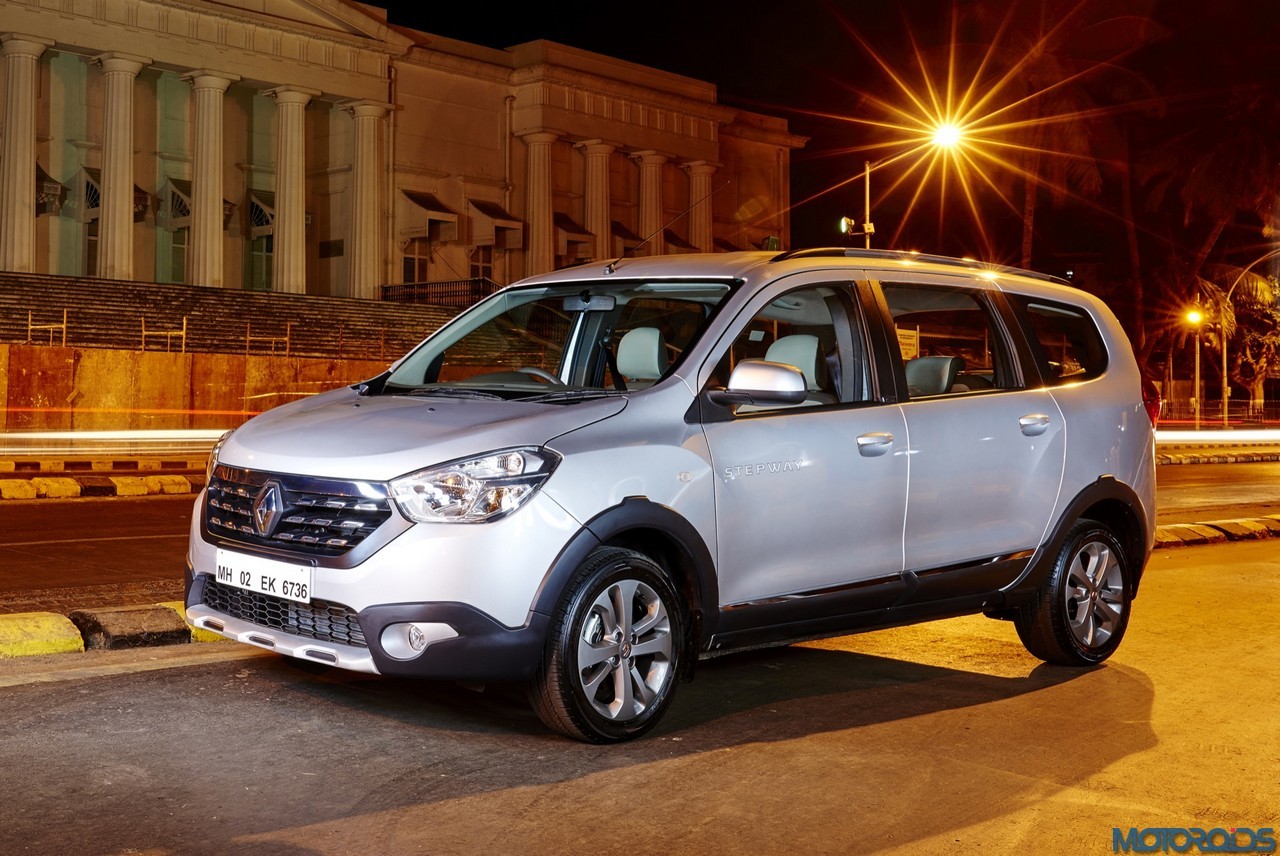 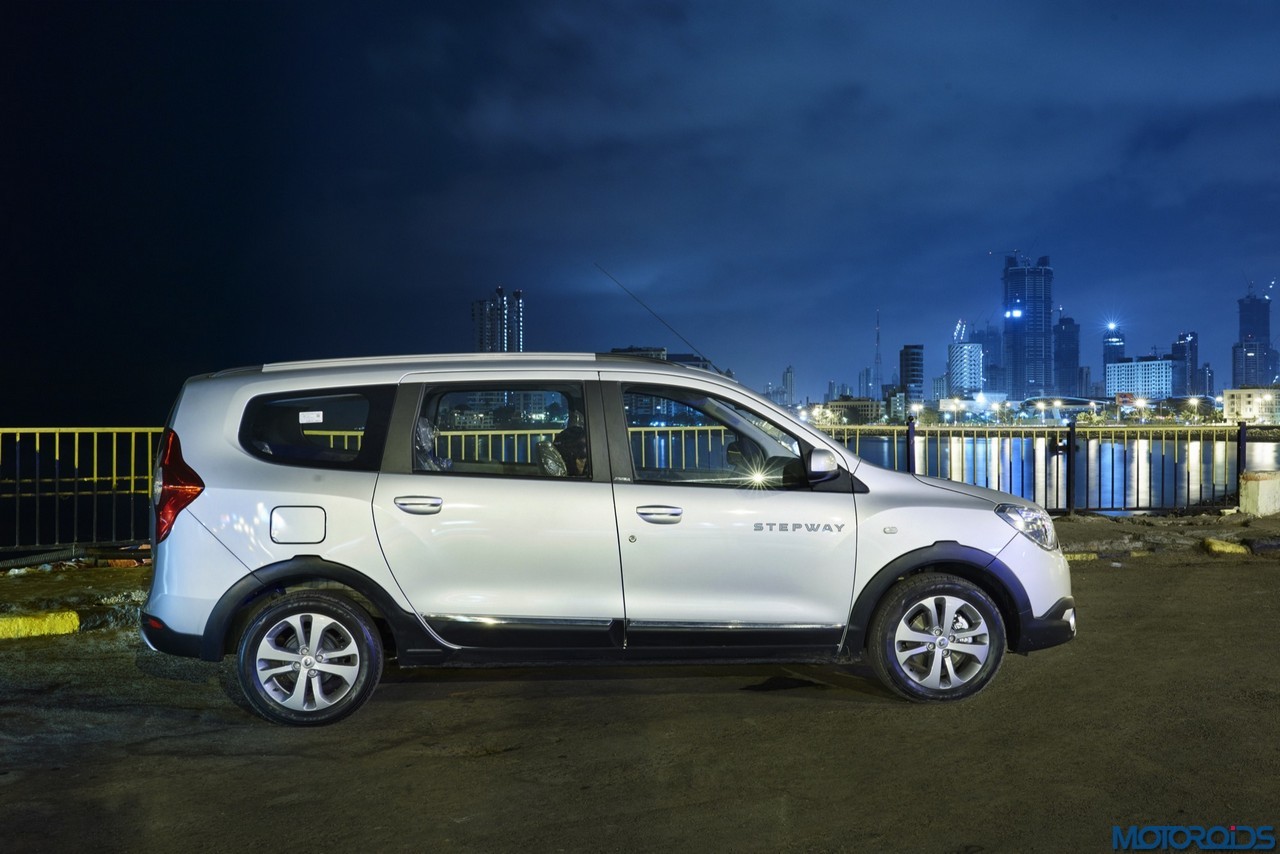 Out on the busy streets of Mumbai, we got reacquainted with the Logdy’s driving characteristics. Let go of the reasonably light clutch and you’re greeted with a rather pronounced turbo lag which possesses the motor till about 1800 revs; a post which the going gets pretty brisk as 245 Nm of twist makes for some spirited shove. Upon launch, Renault India made a big deal about the Lodgy being the most powerful vehicle in its class, and we still give them that.

Like the Duster, the Lodgy is long legged and can reach 170 kmph+ without breaking a sweat, as we found out back in 2015 in our exhaustive review of the standard Lodgy. This makes it a pretty competent family vehicle for the long haul – admittedly, highways are where it’ll be spending most of its time on. Overtaking is a breeze, and most of the time, no downshifting is required, because of the even torque spread in the upper part of the rev range. The engine isn’t too eager to rev though, and the tachometer needle drops anchors at a 5000 rpm redline. However, with the lag, drivability in town becomes a bit of a chore. Forget darting away from speed breakers in second gear, as the drive-train baulks in protest. 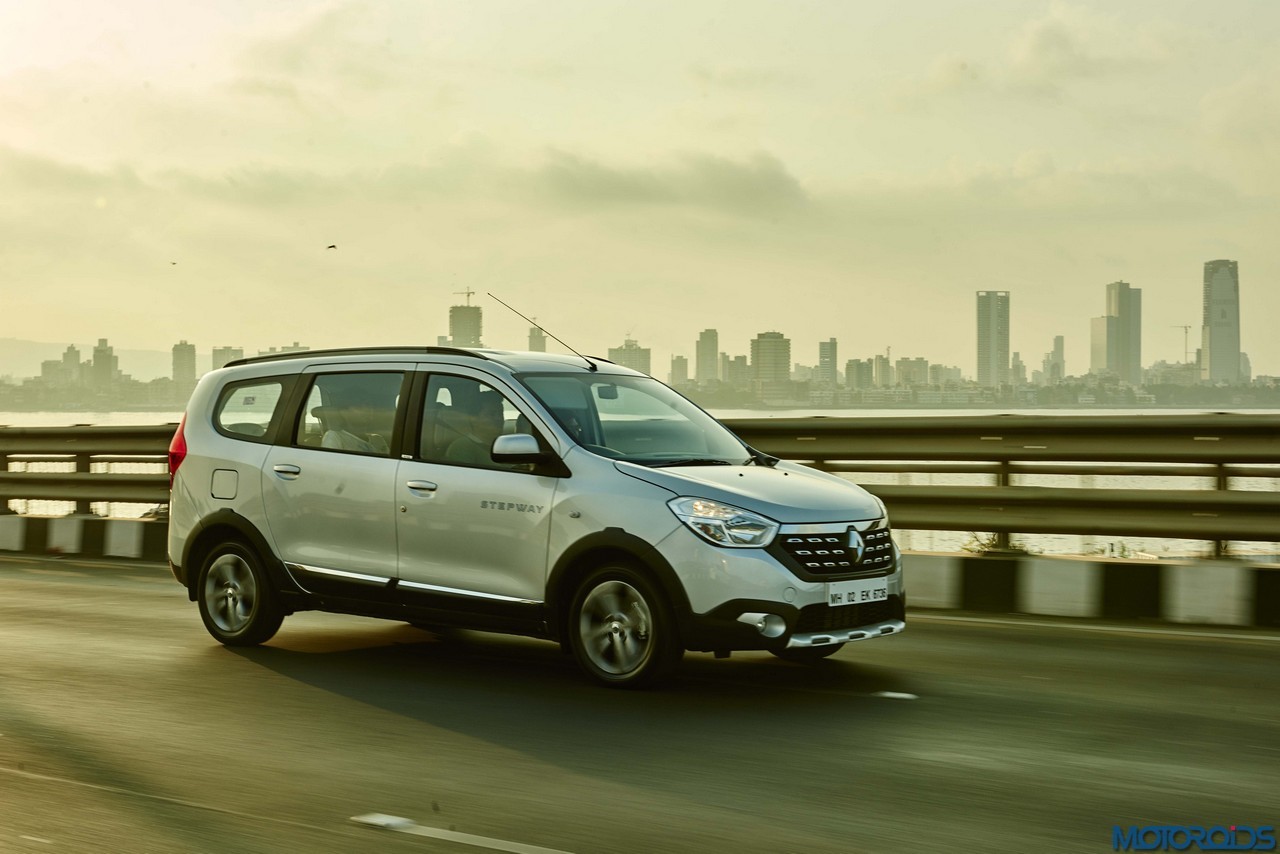 The 6-speed manual gearbox is most definitely not the best out there, and shift action feels somewhat rough. It takes a moment before you could find the gate and slot the stick in. It’s not annoying by any measure, but it isn’t an enjoyable, smooth gearbox either. The ratios are evenly spaced. NVH levels are well contained, with thick sound deadening insulation under the hood. Road and wind noise barely creep in, but the engine emanates a mildly sonorous drone that might be a little intrusive – nothing worth a worry for the class though. 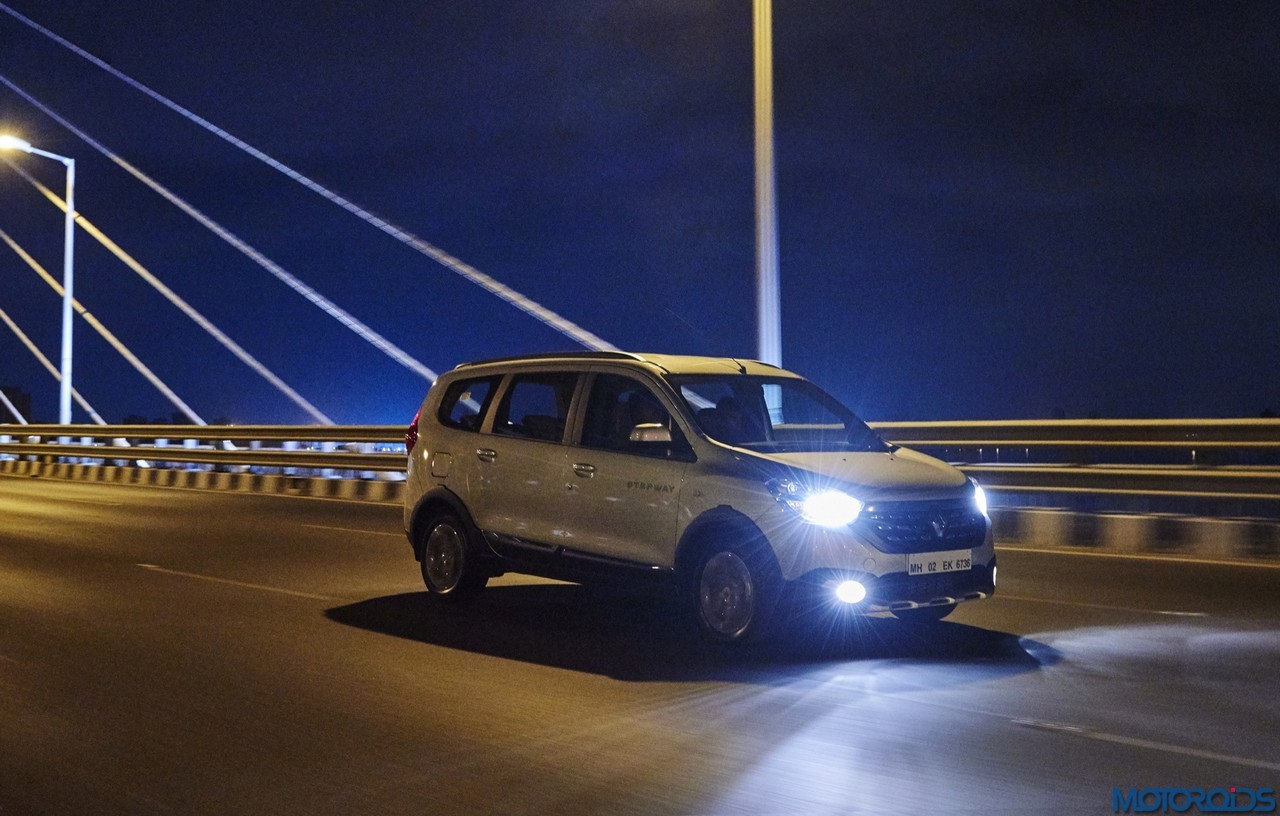 Steering feel came off as a bit heavy at slow speeds, although it became lighter at higher speeds. The monocoque construction ensures that it stays pliant on long, sweeping curves and tracks with confidence. Body roll is also well contained unless pushed too hard. In the city though, piloting the Lodgy was effortless, and it feels like all that mass has actually shrunk upon you, except, of course, for the turbo lag. Braking is adequate but can be a bit grabby. 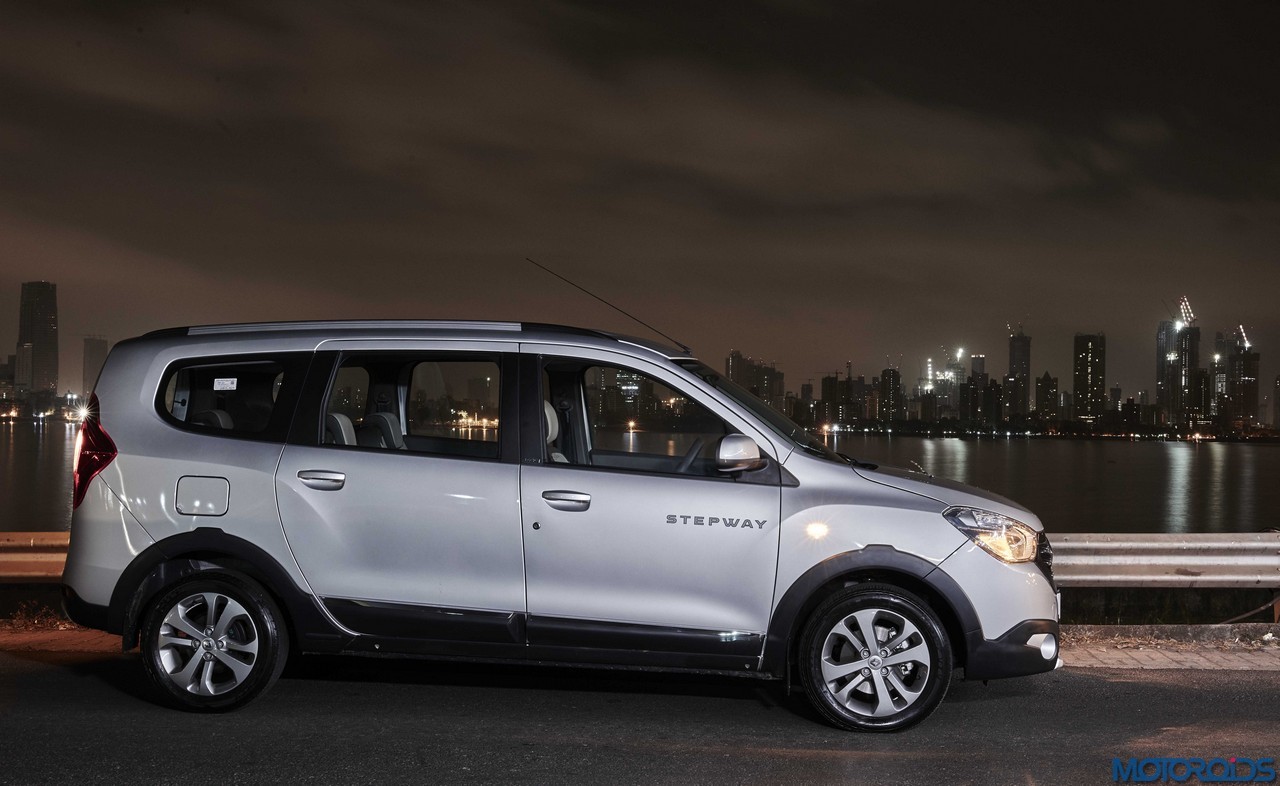 The Lodgy Stepway comes in 6 colours – Pearl White, Moonlight Silver, Planet Grey, Royal Orchid and the latest additions being Slate Grey and Fiery Red. Renault India is offering the Lodgy Stepway with 3CARE, which includes 3 years of warranty (up to 60,000 km), 3 years of Road Side Assistance (up to 60,000 Kms) and 3 years of Periodic Maintenance Service (up to 30,000 Kms). All this will be offered at a cost starting at INR 22,142. 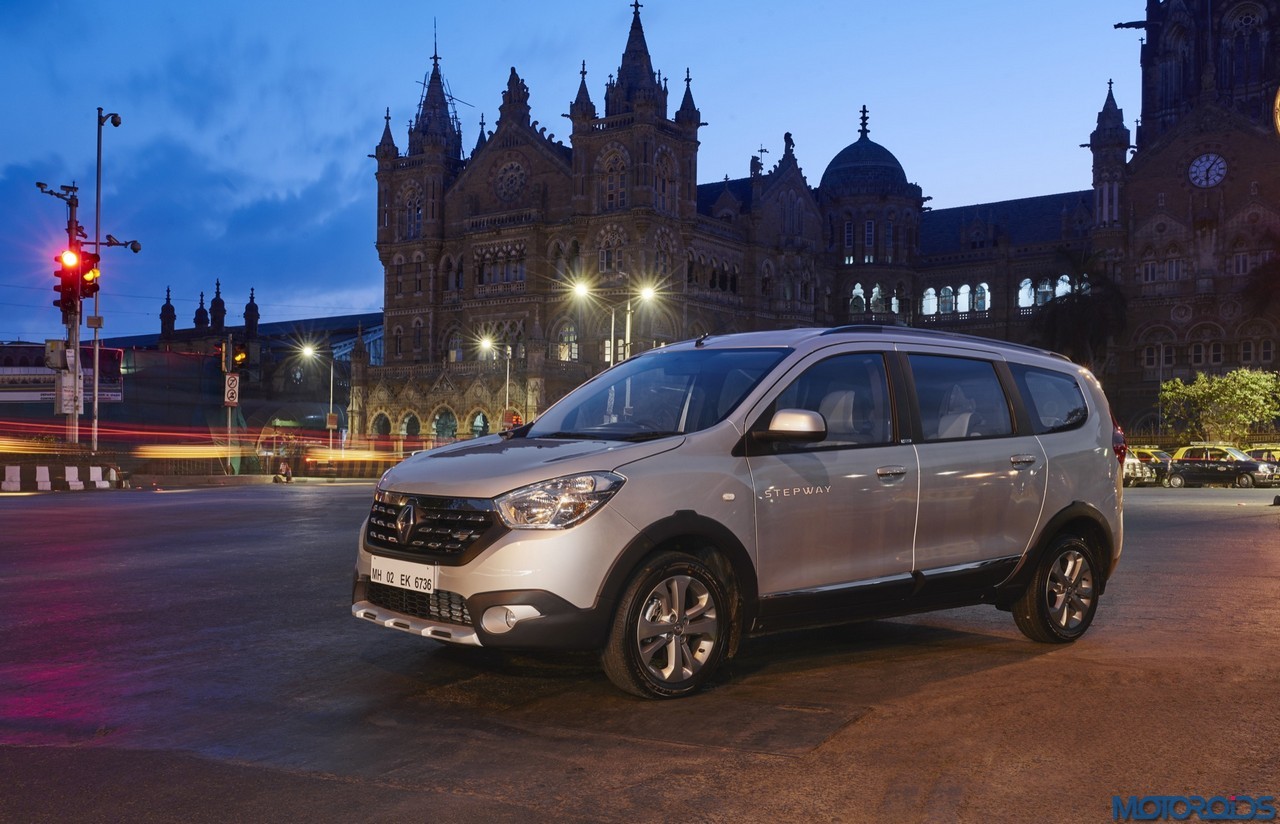 The Renault Lodgy has a lot of things going for it, and that includes the commendable highway performance, the myriad versatility of the spacious interior, great refinement and good fuel efficiency. The standard styling might not have won many hearts, but we believe the Stepway treatment will work in favour of this lovable MPV.