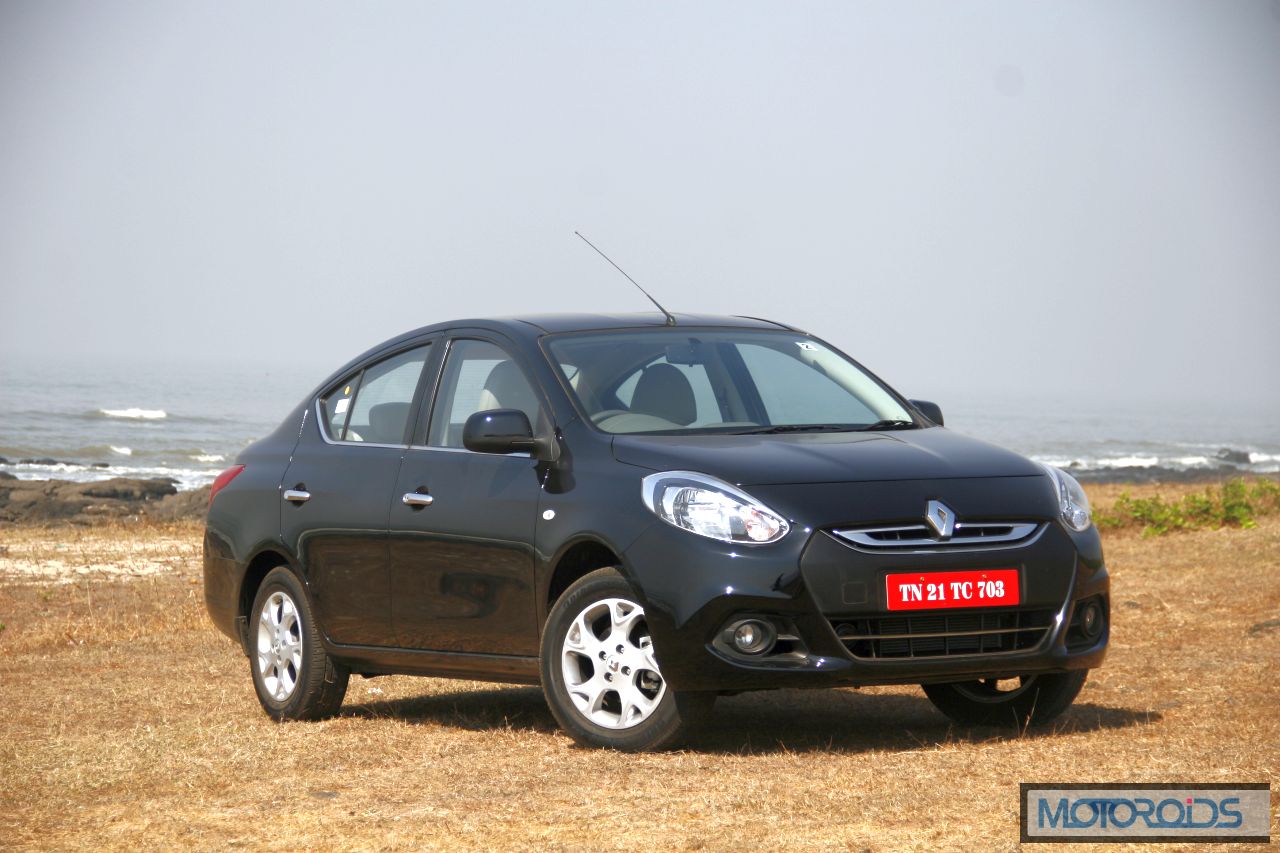 At Motoroids, the number of queries we get from friends, family and readers about automatic cars is increasing at a sharp rate. The interest in the more convenient form of the transmission system is gathering pace, thanks to the horrid city driving conditions in metros like Mumbai and Bangalore.

Now Renault India, in a bid to make their Scala sedan more appealing to the self driven execs in metros, have introduced a CVT auto transmission for the car. Christened the X-tronic, the new transmission system, as claimed by Renault is not a slow thinking, slow moving laggard like most conventional CVTs. It apparently features some new innovations and modern tech which makes it much quicker and alive than any of its counterparts. Let’s see how true Renault India are in their assumption as we review the the Scala X-tronic CVT automatic. 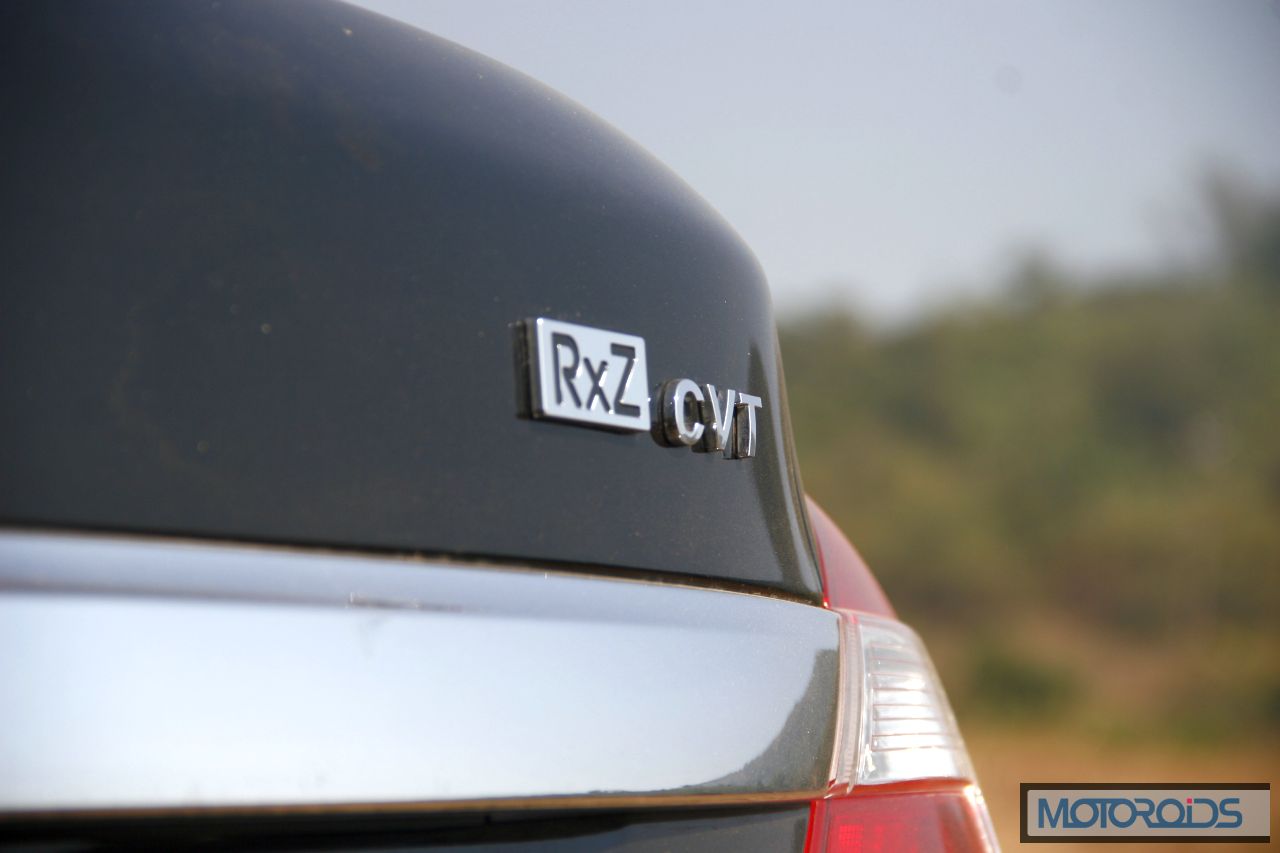 The headline new for the Scala CVT auto is its bewildering ARAI fuel efficiency figure. Conventionally, CVTs are considered to be heavy on fuel consumption, but surprisingly, in case of the Scala, the efficiency figure is an astounding 17,97 kmpl for the 1.5 liter petrol variant, exceeding that of even the manual transmission unit which stands at 16.97kmpl. Quite exceptional, and we don’t contest the claim, as the car’s on board computer displayed an average efficiency figure which nudged 13kmpl for the city part of our Mumbai-Kashid drive.

Among a string of new technologies used in the Scala X-Tronic is the steel drive belt, meant for better longevity and a more meshed-in feel. Nissan, a partner in the Nissan-Renault global JV, has been persistent in researching and enhancing the CVT tech, and the X-tronic seems to really have benefitted with the effort that’s gone into its development. The transmission feel is perceptibly crisper, quicker and does manage to bend the unfavorable opinion that seasoned hands have for the conventional CVTs. 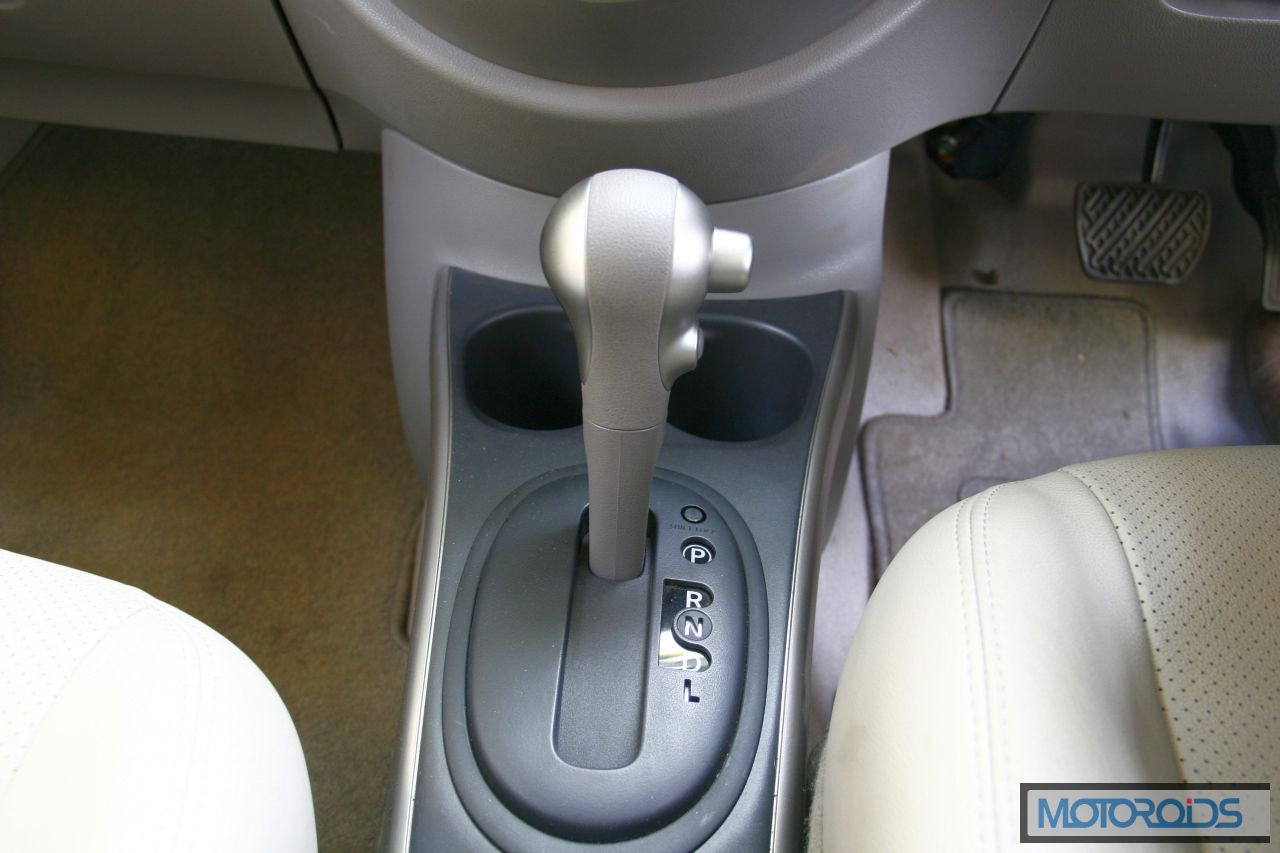 An automatic transmission’s primary utility is in the cityscape, and the X-tronic impressed with its capabilities within the urban confines. Quick to get off the mark, and responsive to throttle inputs at slow speeds, the Scala auto made light work of the city traffic on our way out, choosing ratios judiciously and quickly. With a light foot on the pedal, the Scala auto keeps the revs between a relaxed 1500-2000 rpm, in a bid to maximize fuel efficiency.

The impressive part is the low end grunt – the engine feels confident at low revs and responds well if you suddenly call for more power. An easy driving style, modulating the accelerator pedal progressively rewards you with smooth, convincing acceleration and better efficiency. Harsh depression of the pedal would not result in a blink-fast kickdown. The system takes its teeny bit of time to figure the correct ratio from the infinite options available on the cone, before settling for one. Having said that the kickdowns are still much quicker than other comparable CVTs in the segment. 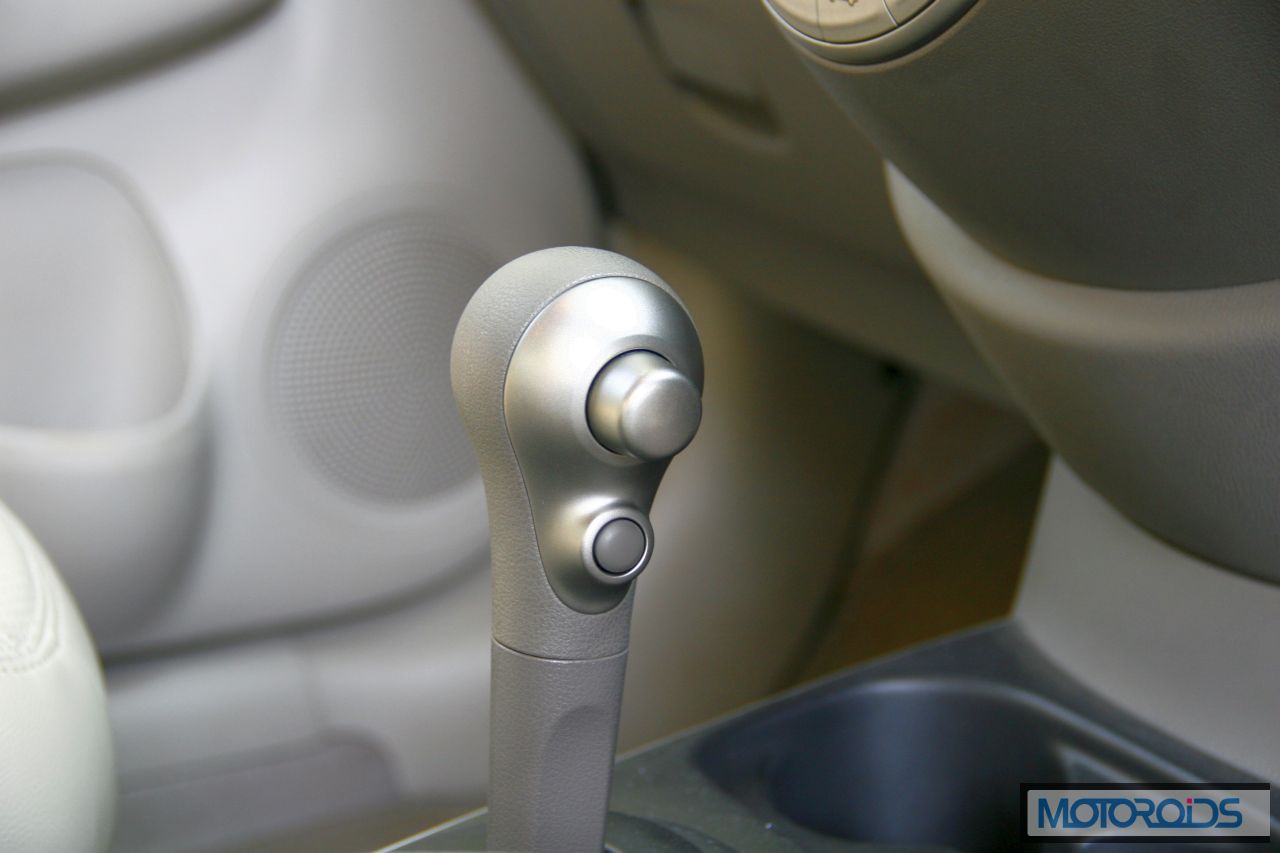 The lower button is for engaging the Sport mode
The normal drive mode comprises of a special ‘Sport’ mode. There is a small button on the drive selector to activate the mode. Selecting the sport mode makes the electronic brain choose a shorter gear ratio at any given speed, pushing the rev needle higher up in the rev range. With the car running a higher engine rpm for any given speed, you are more prepared to accelerate. This helps in situations where you may need the revs to build quickly, say, while overtaking on a single carriageway with a car approaching from the opposite direction.  Also, in Sport mode for any given throttle input, the engine holds on longer to the revs when compared with the normal drive mode. This makes for a livelier feel behind the wheel, and helps you when you want to drive in a more spirited manner, or when you need those extra revs for a quick overtaking maneuver. 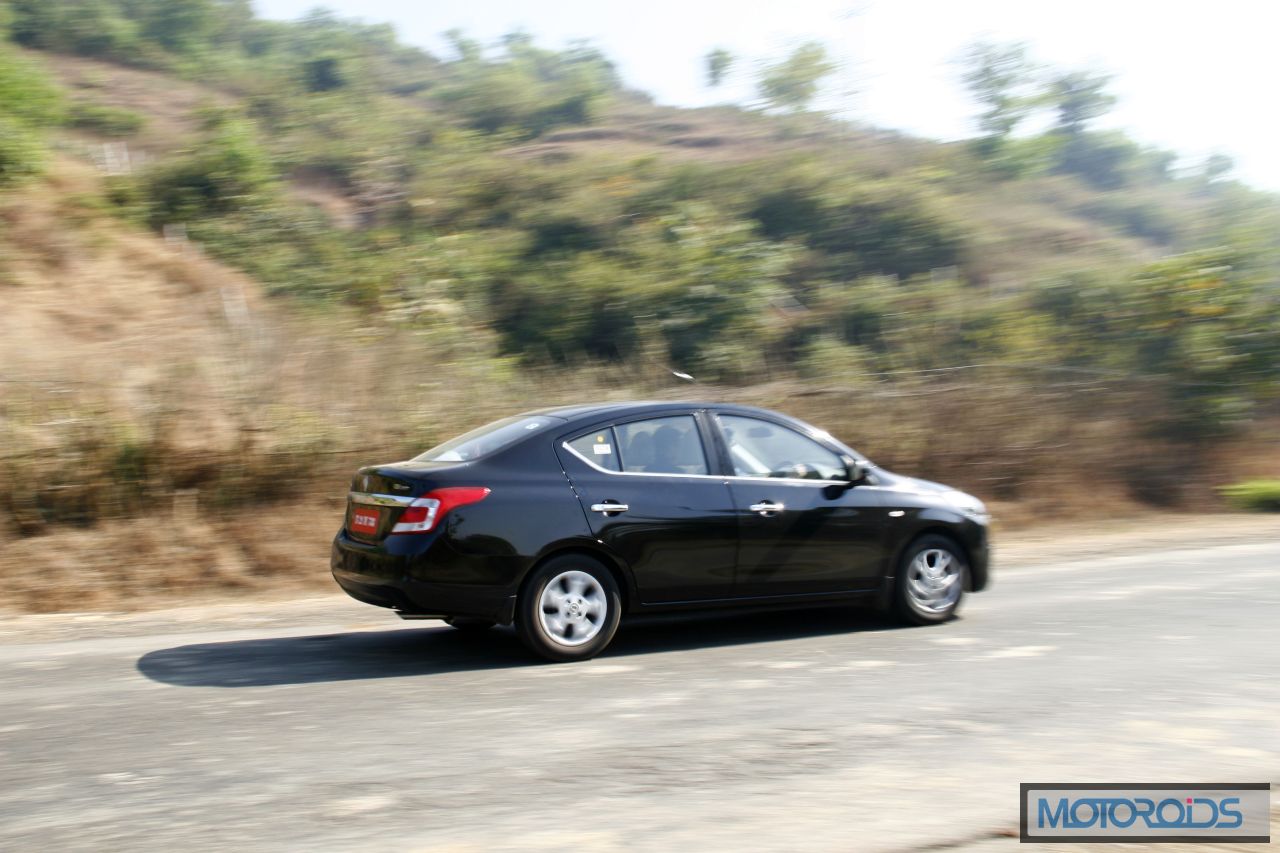 Apart from the Sport mode, the X-tronic Scala also features the Low mode, which is a common feature on all such CVT transmissions. Meant to offer a low gear ratio, and in turn more torque for any given vehicle speed, this mode offers better pulling power and engine braking in situations such as driving downhill. The Shift Lock Release on the drive selector panel is meant to let you release the car from Park mode when the battery is low or completely discharged.

During our 300km drive, we found the X-Tronic CVT to be noticeably superior to its peers. Of course, it’s no DSG or a 7G-Tronic, with there being a wee bit of lag between abrupt throttle input and ratio selection. However, comparing apples with apples, it’s ahead of its comparable counterparts by leaps and bounds. 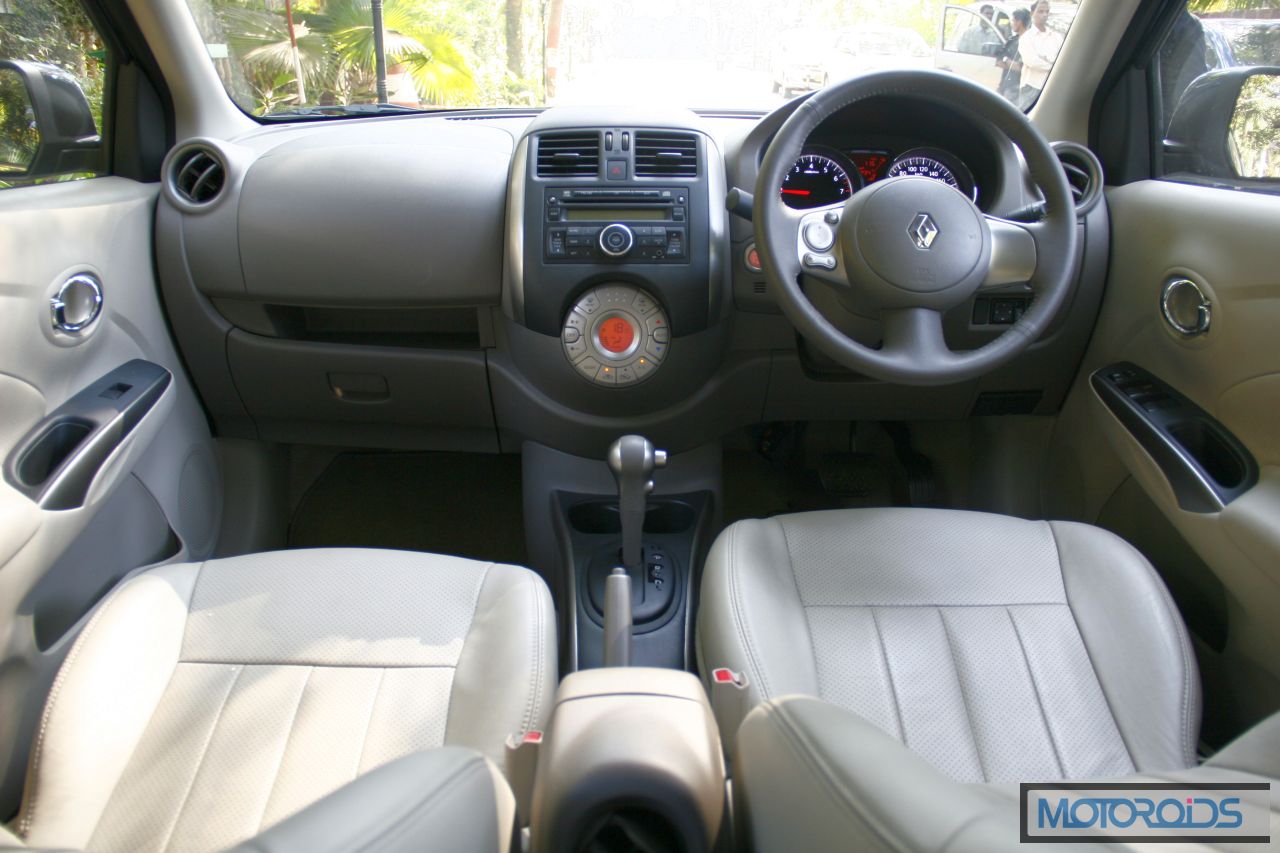 But even with all its virtues the Scala X-tronic revels in mild to moderate driving conditions, and feels a little ruffled when pushed to the limit. With the pedal to the metal the speed that the vehicle gains isn’t quite in line with the noise the engine makes. The rev needle climbs up to 5500, but stops short of the 6000rpm redline. Not that the Scala automatic cannot be driven hard, but it doesn’t quite feel at home when hustled. Having said that it still manages to be the most rewarding CVT for a driver in the Rs 10 lakh segment.

On the outside, the CVT badging next to the variant name differentiates the X-tronic from the manual version. Inside the cabin, the Scala auto is identical to the manual version save the drive selector unit. Generous rear seat legroom, air recirculation unit and comfortable seats remain untouched. The top end RXZ variant features leather seats and upholstery. The boot is cavernous as ever. 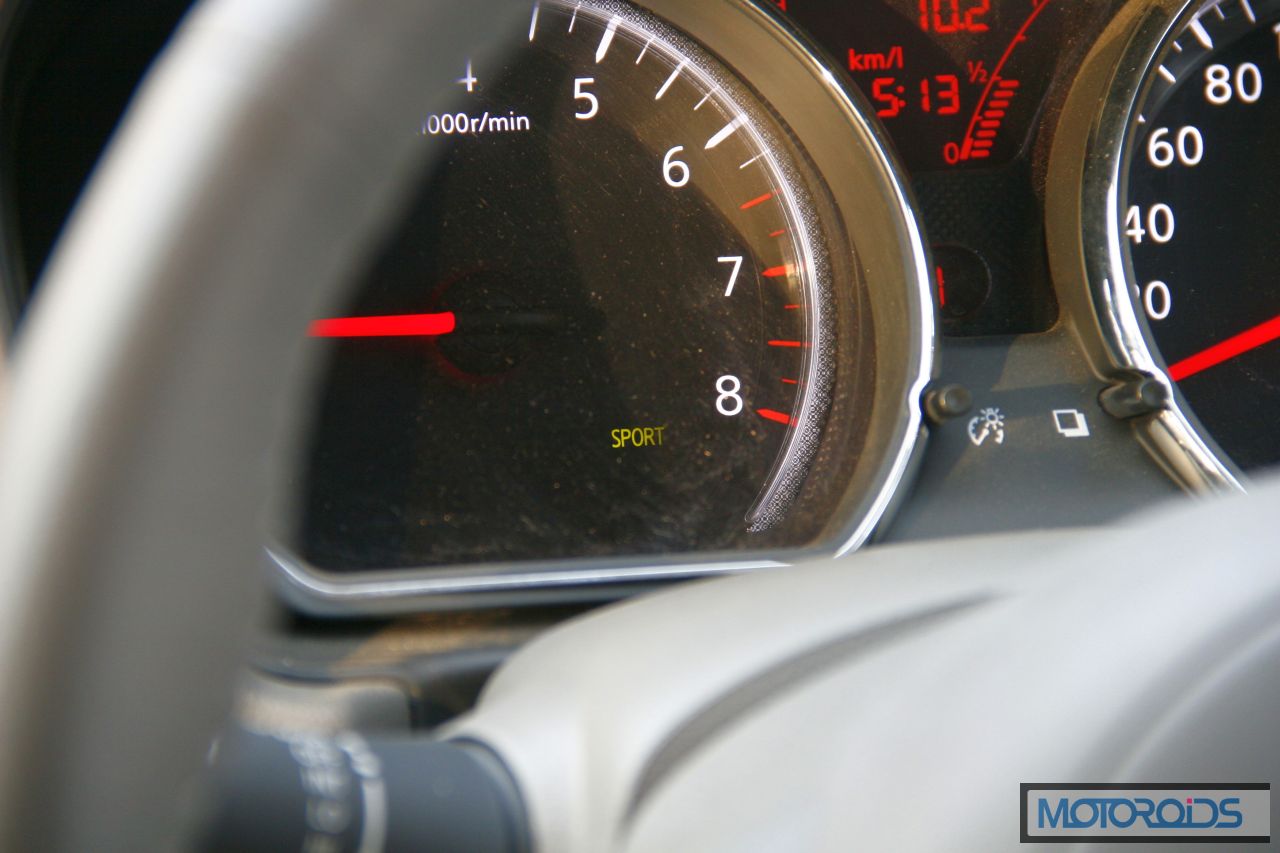 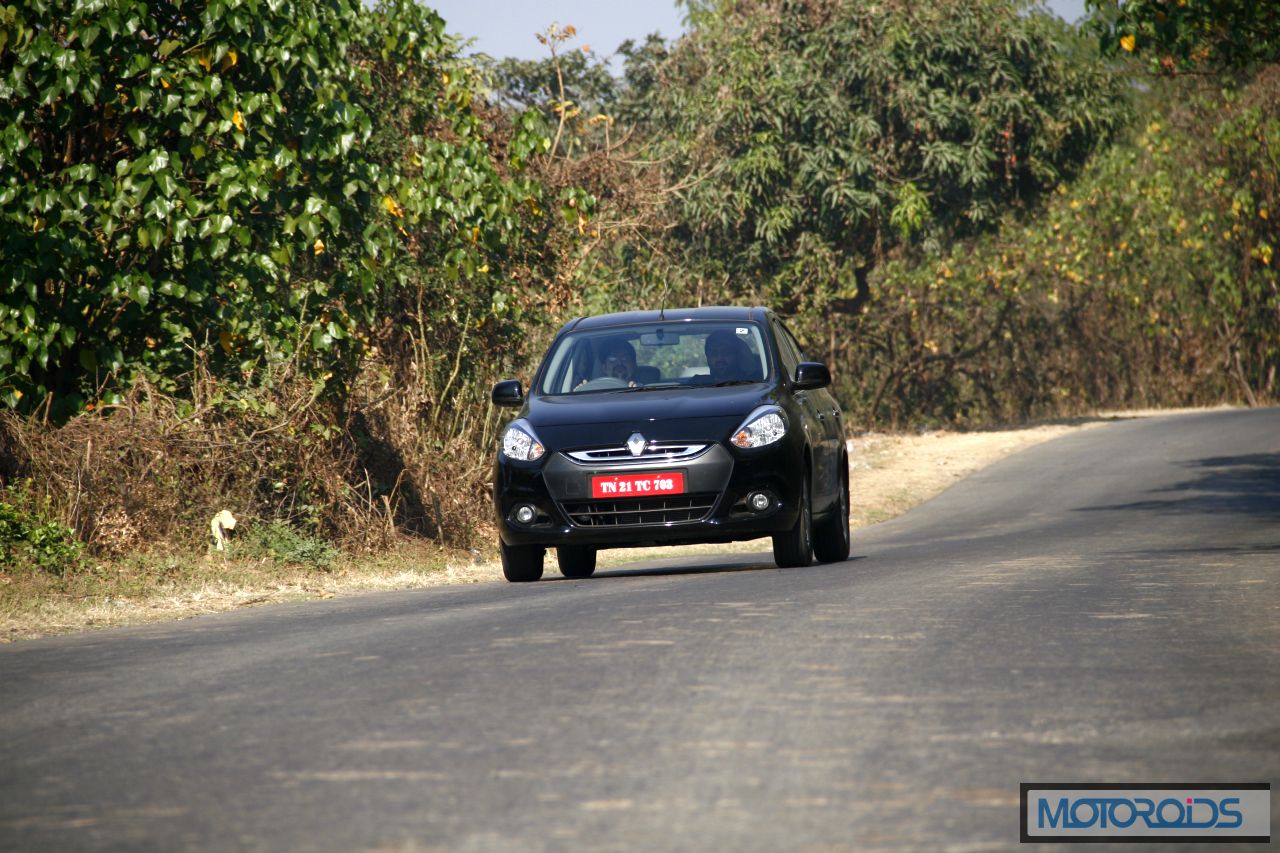 All in all, the Scala X-tronic CVT is decidedly a superior CVT auto as compared with other similar products in the segment. It’s more responsive, very pratical and doesn’t affect the fuel efficiency of the car. It also features sport mode, which lifts the drive character and feel by a fair margin.

The prices have not yet been announced, but we expect an increase of about Rs 70-80 k over the manual version of the car. Count on us to get you the details as they are revealed.