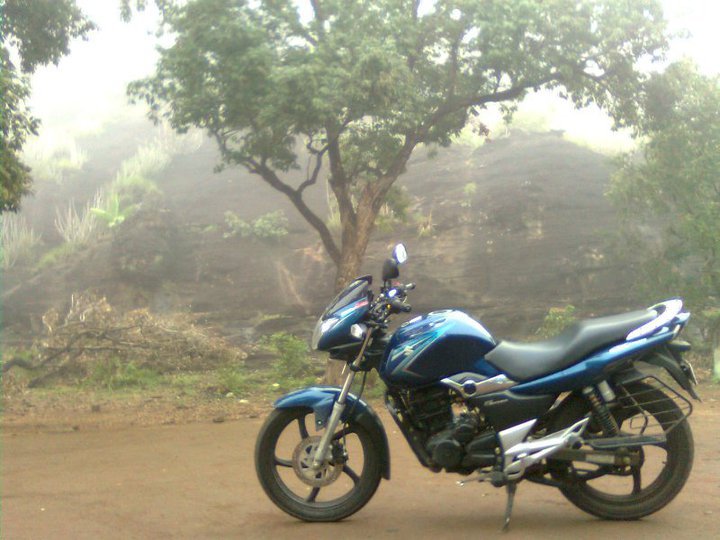 Let’s start with the design. In one line- it is heavily inspired by 2006 SUZUKI GSX-R Series. By the way, tell me something, ain’t you guys fed up by listening that this thing is inspired from Gixxers? And ain’t you bored of reading about that counter balancer shaft which is gear driven? And of hearing and watching the same old 6 speed sticker on these bikes accompanied by XTP logo? Okay don’t stress yourself by thinking much about such things. Ain’t of much use to most coz you never going to open up the engine castings to see how a counter balancer gear driven shaft looks like. Let’s move on to ‘How it feels?’ And yes, everyone wants to know how it feels rather than how it works.

Here comes the ‘all new’ 3 years old Air-Cooled 4 Stroke SOHC two valve engine which Suzuki created for their machine which also shared its fate with Zeus, in sales numbers and mileage. Since we already know this thing develops 13.8 bhp and 13.4 Nm of torque, we must know that these figures ain’t impressive at all for enthusiasts, and neither the bike is targeted at such people, it’s for commuters as per enthusiasts, but I say it’s the second best tourer as per me for everyone. And leaving the numbers apart and moving onto the engine, we come to feel that it is well refined, extremely low on NVH levels, which is a common Japanese trait. This 149 ml mill is mated with a Mikuni BS-26 carb with a TPS. A conventional CDI Ignition is used to ignite the fuel and some adrenaline as well. And does have a great mileage figure which varies from as low as 48 to as high as 65 kpl depepnding on the way you ride, and of course that way includes the roads you ride and the kind of riding you do! One can also extract a good figure by choosing long empty roads on which he can ride at a tad more than 31 kph with 6th gear engaged! Now can you imagine such a road at which you can or can’t ride more than 35 kph but 6th gear is something you can easily get on going with and this is the only place where this 13.4 Nm comes into play…. Again I would recommend you not to stress your knees, and just know that you can ride this bike slower than any other bike without the need of changing gears every now and then, 1st gear tops out at 42 kph, 2nd tops out at 70 kph and so on while 6th can haul this 149 kgs animal from as low as 31 to upto 120+ speedo shown speeds. By the way did I mentioned that this is one rev happy engine? 11,000 rpm is what this engine can rotate upto. One more thing that Suzuki boast of and publicise is XTP, which is Xtra Torque Performance, this is nothing like technology but a single engineering modification by which the torque output is increased and can be equalled to the power output or can be made higher. One can actually experience XTP with all Suzuki bikes and cars engine from the Maruti Suzuki 800 to Swift and SX4 and from Suzuki Zeus to Suzuki GSX 1300 R Hayabusa. All the engines are known for the high torque output than the power output, also torque is concentrated to Low and Mid Range which is also a common Japanese trait. And by extracting more torque, the engine demands lesser gear changes contributing to higher fuel efficiency and ever relaxing riding and driving postures. Torque is also responsible for the acceleration, and is as well for 0-100 kph in 2.5 seconds for the Hayabusa. Here on this bike the XTP can scare you if running on stock rear tyre by sudden drifts, yes the bike is prone to drifts only coz it doesn’t wheelie. For more on Torque, we will discuss later on a seperate topic. Till then we leave XTP here and let’s move on to…..

This departement is same as any other normal bike in the segment, if you can knee down, GS 150 R welcomes your efforts, and if you ride normally, it won’t deny your feelings. Riding on 18 inch Alloy wheels with MRF Zapper FS with 3 inches of width at front and Zapper Y with 100/90-18 dimensions at the rear offers gr8 grip, not due to tyres, but due to the sheer weight of the bike as well. Avoid being enthusiastic in turns during light showers and wet spots on roads. And with 1340mm of wheelbase, SUZUKI GS 150 R itself avoids unexpected wheelies and higher rear end weight also avoids stoppies of which pulsars were and are prone to. Mind you, this thing can stop quicker than most of the counterparts and that too without hurting you much if you ride cautiously and attentively to road and traffic detailings with the help of 240 mm Hydraulic Disc brakes at the front and 130mm of Trailing Drum Brakes at the rear.

With Telescopic Forks up front with a soft damping settings and twin Nitrogen filled rear suspension with 5 step adjustments to the spring with double sided swing arm one enjoys straight upright position which doesn’t harm you on highways though you may try altering your way of sitting to look more like some poser if you don’t like commuter way of riding, but I am sure you will end up with aching shoulders by doing so. Sit straight, and feel the room it has to offer to both rider and pillion. Seat is tad too high at 790 mm height but is a bit lower than Zeus which was 810mm, so short riders should avoid GS 150 R. Not to avoid discomfort to your body but also to avoid pain and discomfort to your pocket as well and for a good looking healthy bike I should say. Pillions need not to be tall because even if they arel, they will end up cursing the bike for being too high from the rear end and ladies often ask for ladders installed to sit and end with a jump. But there is more to this, after all this effort one can enjoy riding this bike normally and easily. And can enjoy the comfort which some good nice chair offers.

One great partner is all what one needs for a great road journey and SUZUKI GS 150 R open heartedly asks for such long rides and with ample power in hand with decent mileage figures of around 50-55 kpl one actually doesn’t worries much about things like side winds and overtakes and frequent stops at the fuel bunks. And a rider of my height can keep on riding for around 500 kms on a single day without much pain in the…. Shoulders and arms. What you thoughts by the dots? Be Serious, am saying all this after doing a bit more than 30,000 kms in one and a half years with one of these. 12,000 in the same period on the other. And the longest ride from Bhopal to Allahabad which made the odo climb up by 750+ kms for single side! So, 6th gear seems to have some advantages both in city and highway, for mileage and power respectively.

I have came across a variety of feelings this bike gives, some times harsh some times it’s way too smooth and soft, sometimes feels frugal but some prominent stuffs that can either annoy or sometimes can make feel so good. Starting with the annoying feature, do you remember that “high-tech” rotating shaft inside the engine which we dumped earlier? yeah, even after that viberations do creep in between 3500-4000 rpm, after that they go somewhere and relax, then they arrive at the work again at around 10,500 rpm, to mind you either one rides this bike around the first arrival of viberations or the second, and both are useable rpm ranges if you want. Second annoying thing is a bit of rattle between 3500-4000 rpm from the front cowl if your bike has met an accident earlier, other thing is, a bit of wobble at around 60 kph due to a slight bent in the alloys, another one is that ‘ducking’ headlight which lights up almost nothing if anything with a more powerful headlamp is marching towards you. Now let’s talk about good things, Alloys: To Die for! Thest best looking alloys ever on any available in India bike, Front Discs, ah! Saviour, always a sureshot. Rear LED Tail lamp, oh! Looks great indeed. Seats: a sofa I would say. Torque: Blood in veins, go past the 4000 rpm mark and the behaviour changes and remains as it is upto 8000 rpm mark, after that the bike goes lazy! Another good, the perfect gear shifts almost everytime untill and unless you are stuck in 6th cog at ‘Zero’ kph!

So now with almost everything that I have felt, in so many days of tours and normal city commutes, I found this bike to be reliable, cute, simple, and yes she’s way too heavy! And this will be a perfect ending with the Digi Dash talks, a yuck Orange back light mated with very well and bold an easy to read digits and letters, and with an in-built clock you never miss when the cutest chick next to your coaching class goes back to home on her scooty. The fuel gauge has got 5blocks, 4 litres of fuel gets in for each. and yes it get’s filled upto around 19 point something litres till ‘neck’. Now the thing I am going to explain over here will be in bold letters which has got hell lot of rumours over everywhere, and not just only in India, even some other South Asian Sites have such rumours about that small extremely bright annoying LED which starts glowing as you touch the preset rpm in some 3 idiotic modes, The Eco-Mode, the Power-Mode and the ‘Nothing’ Mode has nothing to do with what power or fuel efficiency one gets, neither the modes actually alters the mapping or the spark timings neither even the TPS Settings, those settings are just biult-in to the meter console and have been set to remind you by glowing that LED everytime you touch that ‘ducking’ rpm, for example, for Eco-Mode that you set for mileage actually changes your setting by glowing that annoying LED so you should go easy on throttle and thus increasing the fuel efficiency while in Power-Mode the LED glows once you touch the 8000 rpm mark. And I already said the bike goes lazy after that.

An end must come, always, so that we can start a new starting. What now? waiting for an end? Okay, a good buy again if you don’t want to start a auto deal business, I mean if you don’t change your vehicles every two years, and don’t buy vehicles keeping in mind that you bought it for 40,000 and wanna sell it at 42,000 this bike is for you. If you buy vehicles which should be fun and something different from other sheeps buy this. If you want a reliable and almost a bullet proof engine which doesn’t goes off everytime it rains, buy this. And with an Ex-Showroom price of 61,804 INR this surely is a good buy, cheaper than most of the bikes or even if almost the same reliability and quality is an add-on that you will get