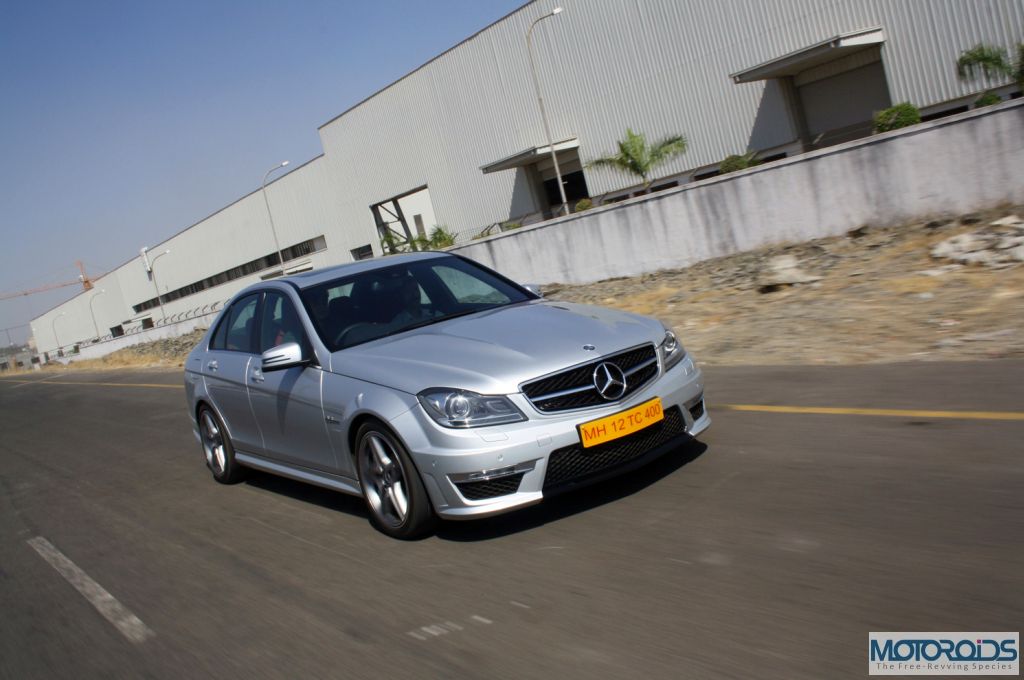 We were recently invited by Mercedes at their Chakan plant for an interaction with their top brass. Interacting with Mr. Peter Honegg, MD Daimler India over the dinner table, as we realized, was an evening extremely well spent. That masculine thick moustache, and that burly personality may look intimidating from a distance, but scratch a little deeper and you’ll be introduced to a good-humored personality with a passion for all things automotive. His liking for fun and humour is matched only by his business acumen and an understated resolve to excel at his job. We absolutely loved our time with the young at heart old man.

The following day we walked along the body shop and assembly lines of Mercedes-Benz cars to appreciate the high standards the company follows assembling its premium cars. This was followed by the drive event, which very frankly was the event the entire journo bunch was eagerly waiting for.  The afternoon session after the lunch saw us standing next to a gorgeous lineup of M-B cars including the SL63AMG, the C63AMG, the E63 AMG, the E-class coupe, the SL350 and last, but not the least, the S500 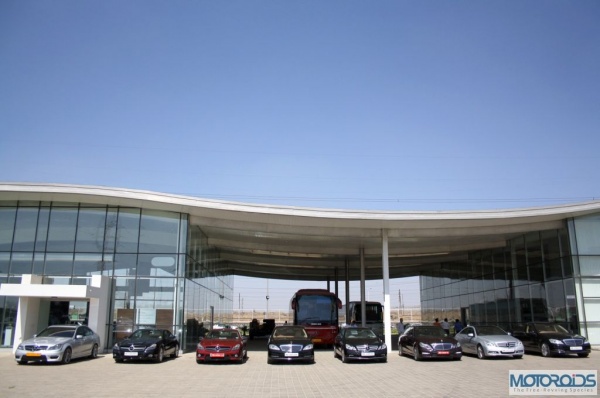 We drove these cars on mostly deserted roads outside the M-B India plant at Chakan. Being a primarily industrial area still under development, the traffic on the inside roads is next to none. Don’t be fooled though, as the ignorance of the local commuters towards following traffic rules and a complete denunciation of road safety makes the area full of surprises. So while you have ample empty stretches to give those cars the stick, you also have to be wary of the double axel truck charging towards you on the wrong side of the road. Such is the haughtiness of these drivers that you sometimes wonder whether you are actually visible to them. I’ll share with you the funny and precarious (in one case) incidents that happened during the drive as we move along. But for now, let’s not waste our time talking about all these things and put the pedal to the metal straightaway. 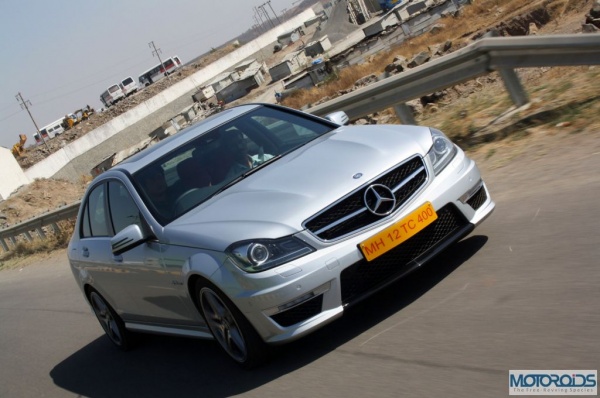 Call it luck or a coincidence, but the first car we got into turned out to be the C63AMG, one of the most famous models in the AMG lineup of cars worldwide, known not just for its maddening power, but also for its balance and behavior. As the title suggests, it’s a furious Rottweiler with enough aggression running through its veins but it would not as much as squeak before sitting down meekly at a mere gesture of its master’s finger.

The C63AMG makes its race bred DNA evident to its willing pilot right from the moment he steps in. And so it did to me. Even before I turned the ignition on, the seats with their heavy bolstering gripped my shoulders like leeches, eliminating any chances of lateral slide during hard cornering. The cockpit appeared to have been assembled around me after I sat in. It surrounds the driver in such a manner that there is an instant feeling of engagement. The controls fall extremely easy to the hand, the center console and floating central panel are designed in such exciting manner, you feel as if you are sitting in a fighter craft and preparing to go out on a war mission.

Turn the ignition on, press the right pedal just that wee bit and this baby would play one of the most melodious tunes for you. The sound coming out of that 6.3 liter naturally aspirated V8 is decidedly one of the most exhilarating sounds your ears would hear within a car’s cabin. It’s a restless burble, almost like the definition of what a sportscar should sound like – instantly reminds you of your favorite cars you drove in those simulation race video games. Have your gaming console connected to a potent sound system, switch to the cockpit view, and press the accelerator button on the control pad ferociously. It’s so far removed from your everyday driving experience, it feels unreal. 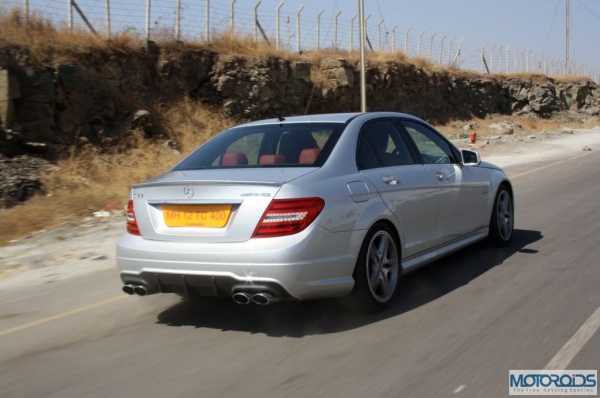 There are more than 450 horses under that bonnet waiting to be taken charge of, leashed by the AMG SPEEDSHIFT MCT 7-speed sports transmission, offering various modes for various driving moods and conditions.  You can choose from comfort (really?), Sport (nah), Manual (am too lazy) and Sport+ (now we’re talking) modes which change the engine response, shift points, suspension tautness and steering feedback to deliver the best experience to the driver.

To be frank I did not choose the Sport+ setting as I started off. Tough as you would find it to believe, but I really wanted to shift to the aggressive setting later to fully understand and appreciate the pleasures associated with it. I removed the unique Mercedes parking brake (pressed by left leg to engage, and pulled by right hand to disengage), and coasted out of the M-B facility. Once on the empty road outside, I shoved the right pedal with all my weight. The engine sang its melody once again, and I felt blessed. This is not a linear yowl (somewhat like what you get to hear in those inline 4 SBKs), mind you, which by the way is equally intoxicating, but it’s rather an amplified, unsynchronized burble with bursts of sound emerging from every pot as it’s fired. You can somewhat compare it to the sound of a three pot mill of a sportsbike. It’s lovely, in its own inconsistent way. As I mentioned earlier, it sounds like the quintessential voice of a sports car. 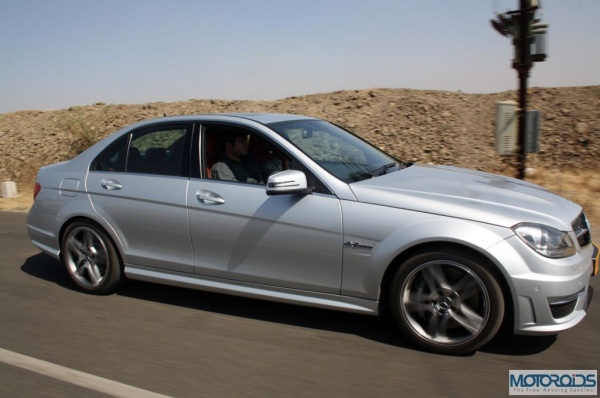 Given the stick, the C63 knows how to control all those derby chargers with élan. The C63 holds its line even under furious acceleration, and with its tight steering feels like a taut, well put together unit cocooning you in its arms even as you try to hurtle around corners at speed. The acceleration is furious to say the least, and suddenly makes your understand why your daily driving experience is so unworthy of a smile on your face. In an instant, it lets you understand why so many people across the world are ready to shell out so much money for this glorified version of a C-class. It’s really an engaging, enthralling, and intoxicating sports car.

Not that I was not having fun, but I finally decided to put it in the S+ mode, and I can’t begin to explain how much it changed the character of the car. The tacho needle which was dropping down after kissing the 3000-3500 mark on the tacho every time I accelerated, suddenly decided it’s going to keep climbing up until it reaches the summit at 5500-6000 rpm. The acceleration turned from harsh to downright violent and the car would lurch forward with fury hitherto not witnessed. Even as you take your feet off the accelerator, the slightest drop in speed and thus the rpm, induces a shift down and the rpm needle swings back into the action zone. In Sports+ mode, the C63 AMG doesn’t know to lie low. It’s at its vicious, bloodiest, savagest best in that mode. Absolutely thrilling! 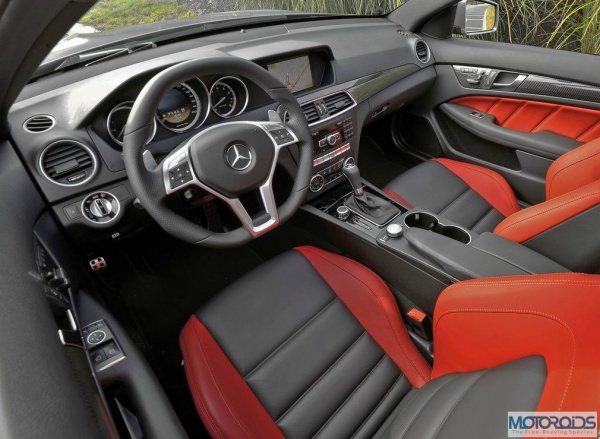 Representative image of the interior

On the move, in the Sport+ mode, all that power beneath that rather unassuming face of a slightly modded C-class is looking for the slightest chance to overwhelm the wheels. If you are charging hard, the slightest spec of dust will be attacked by the tyres in a bid to lose traction. Inadvertent wheelspins with the electronic nanny put to rest come aplenty. All you have to do is turn ESP off. You could hear the tyres spinning upon the tar with every throttle input. Wrangling with the steering wheel to bring the beast back in line, and turning out victorious gives you a different sort of high, and C63 MG has enough firepower to keep you busy the whole day if you so wish. It entertains you as you demand.

We didn’t quite carry our testing gear along, nor did we have a racetrack to really adjudge the cars in detail on their handling or performance merit. This short review and the ones that will follow are based on the brief rides we had in these fabulous cars. Even as I begin writing about all of them one by one, for some reason, I cannot stop myself from spoiling the fun for you guys as I admit that I loved this car, the C63AMG, the most of the entire lot. If I had to adjudge all the AMG cars on their performance and handling merits, this one would be my weapon of choice. It was closely followed by the SL63, and bashed the C63 to death in terms of aspiration value, but given a choice, I would any day take the C63 to a racetrack. It’s a beautiful, beautiful machine! A wild Rottweiler, who waits for your command to attack!