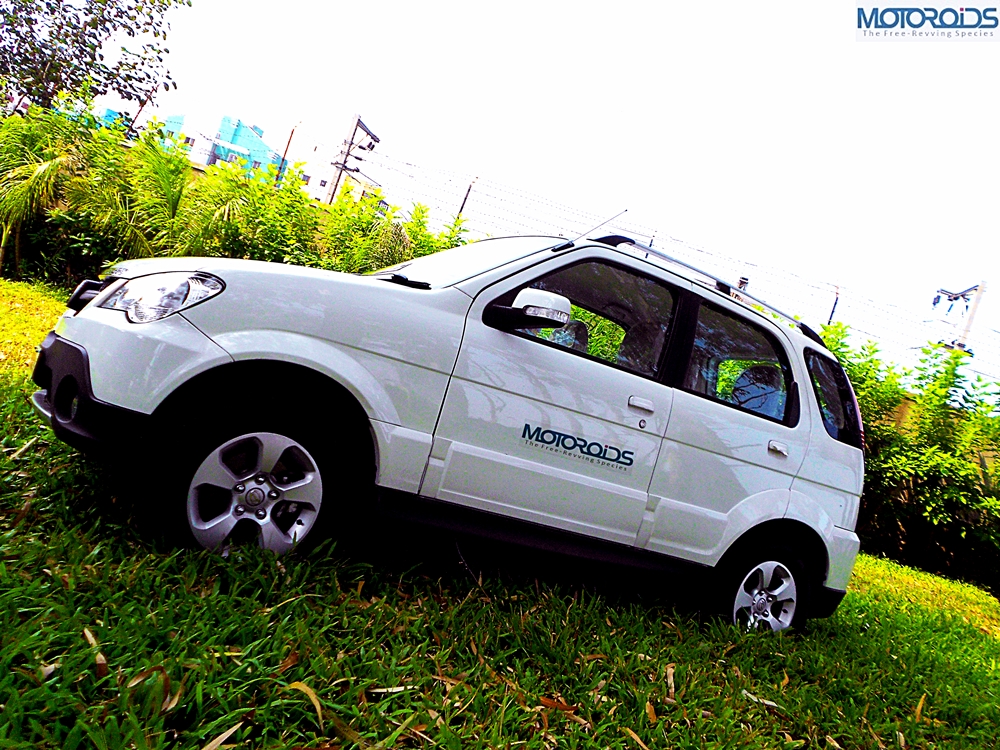 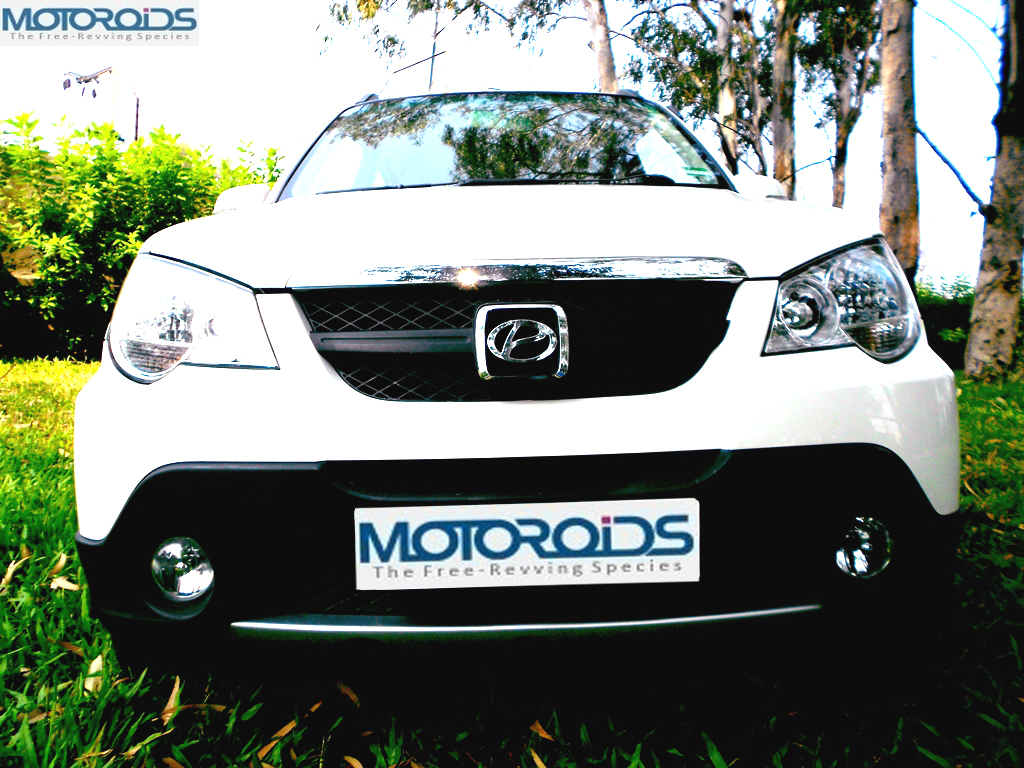 We have always been fascinated by the Premier Rio mini SUV that has been on sale in our car market since 3 years now. The car made an entry in to India way back in 2009 when one of the oldest Indian auto makers, Premier, began sourcing CKD kits of a compact SUV from China through a tie up with Zoyte group. This is when the Zoyte 2008 became the Premier RiO. The assembly of the Premier Rio takes place at the former Fiat partner’s Pune plant.

The Premier Rio can be easily credited with starting the Compact SUV segment in India. It doesn’t take a genius to guess that the new segment is one of the fastest growing markets in Indian auto sector. Renault is already laughing to banks with the sensational triumph of its recently launched Duster compact SUV and many more global players have planned to soon launch their versions of compact SUVs in our emerging car market.

The Rio offers an assortment of powerplants consisting of a petrol and diesel engines. Latest addition to the engine options list is a 1.3 litre common rail diesel engine that enables the manufacturer to sell the car in BS4 markets. This is the same 1.3 litre Fiat Multijet motor that powers almost a dozen other cars on sale in India and has a reputation of offering high performance along with stellar fuel economy. Christened as the CRDI4, the Fiat Multijet is being offered only with the facelifted version of the Rio (The pre facelift Rio is still on sale with older diesel and petrol motor).

Regulars here would remember that we tested the Premier Rio with the 1.2 litre petrol and 1.5 litre TUD5 diesel engine a few months back. Recently, we decided to take the Premier Rio CRDI4 out for a spin and figure out if a heart transplant can infuse some much needed freshness and desirability in a considerably dated car.

In India, the Premier Rio competes with entry level sedans and B+ segment hatchbacks and comes across as quite a unique player. The Rio belongs to the ‘Entry level Compact SUV’ segment if there exists one. Comparing the Rio to the likes of Renault Duster will be like comparing a rifle with a hand grenade. Both are decidedly lethal but very different in operation.

We spent half a day with the Premier Rio CRDI4 — a car that is being imported from China, has roots that can be traced to Japan and has an Italian heart. Let’s see how well this concoction of technologies and parts from various countries fares in our review. 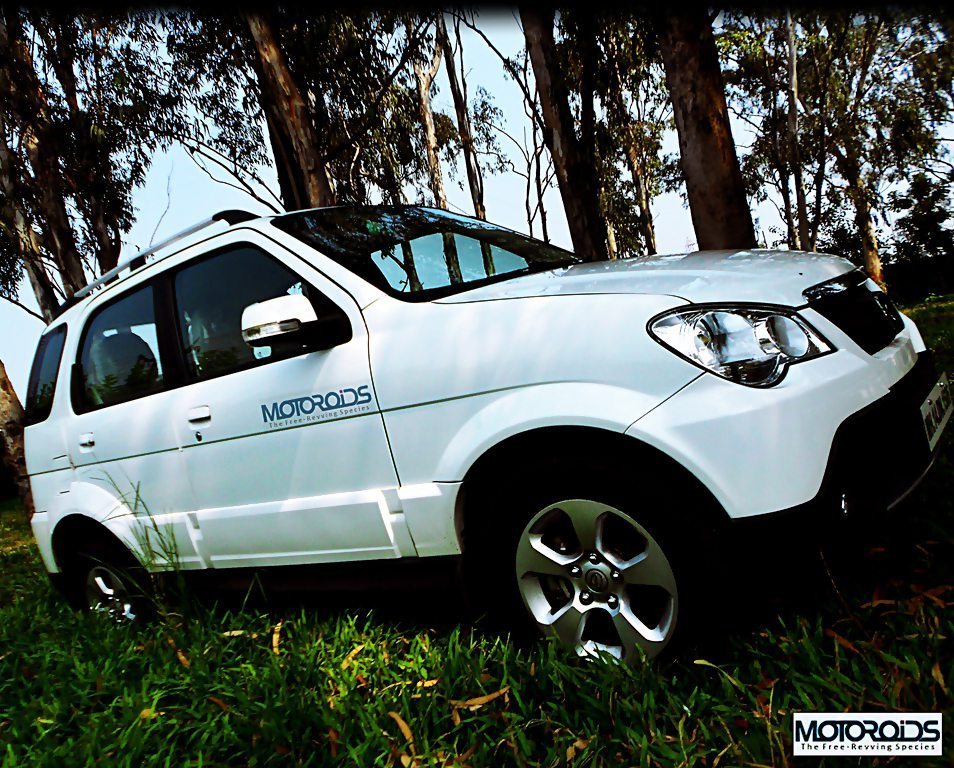 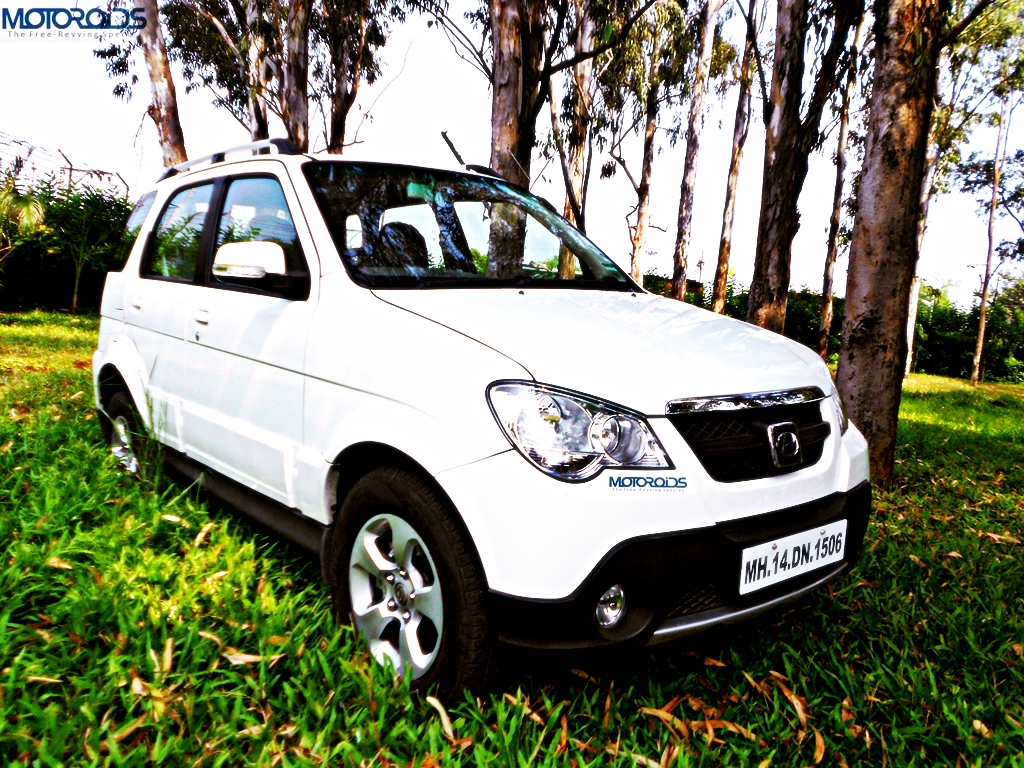 As we mentioned above, Rio is being sourced from Zoyte, a Zhejiang based Chinese auto manufacturer. Now, Chinese auto makers are known to get a bit too ‘inspired’ by cars from rest of the world. Almost everyone must have heard of a certain manufacturer whose name talks of wetness and who pilfers designs like its nobody’s business. Quite similar seems to be the case with Premier Rio aka Zoyte 2008 aka Daihatsu Terios aka Toyota Cami (phew!) . The Zoyte 2008 is allegedly a blatant copy of the first gen Daihatsu Terios. However, it is hard to say how accurate these allegations are as the presses for the body panels and associated parts have been purchased by Zoyte from Daihatsu Motor Co. Ltd. itself.

There is no hiding from the fact that the Premier Rio shares a lot with the old Dahitsu, with the rear being almost identical. Talking about the front, the new front fascia makes the Rio look much  more fresh and upmarket than theprevious version. 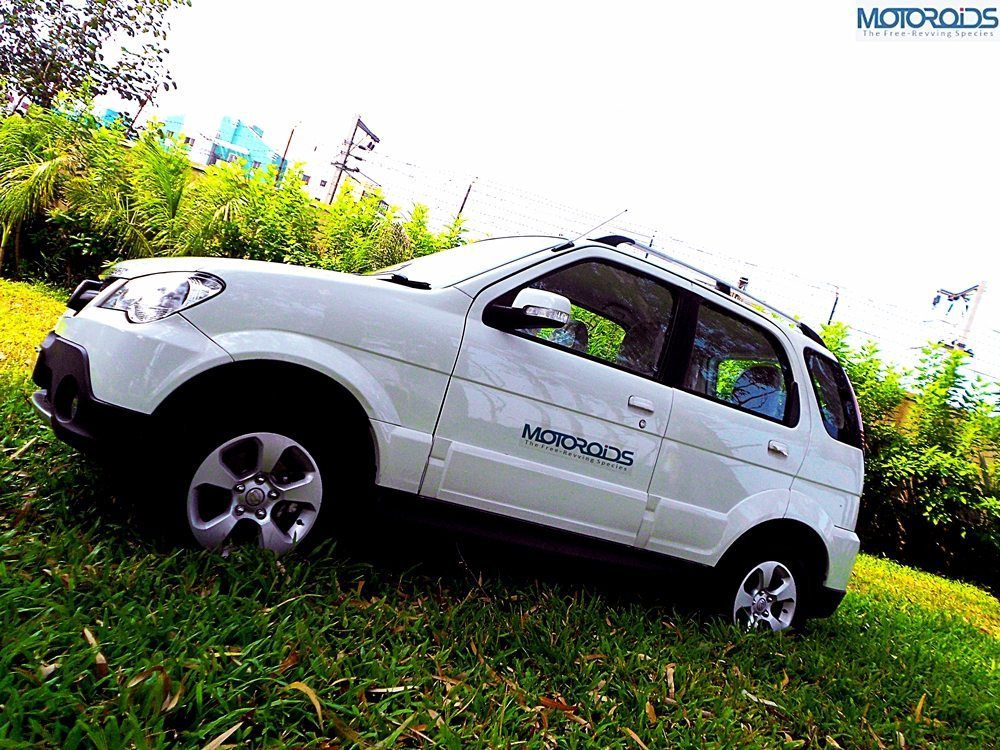 The new front end is courtesy the Zoyte group and they have done a surprisingly good job for a relatively small player. The new headlamps now cut into the bumper and are a bit bigger than the ones on the standard Rio. The grille too integrates with the bumper and the skid plate like chin spoiler lends the car a sophisticated look. These changes ensured that the car had to get a set of new front fenders as well, and if the claim of the manufacturer is to be believed, all these alterations together help in lowering the coefficient of drag. In side profile, the Rio can be seen with body coloured side cladding and has an aura of ruggedness about it. The Rio, in keeping with current trends, gets blinkers on its outside rear view mirrors. The 15 inch alloy wheels look trendy and lend a sporty character to the car. Coming to the rear, the portion that remains significantly unchanged, the car continues to look sporty and rugged and the new bumper has only enhanced this appeal. This car stands out in a crowd of hatchbacks on the road. I would prefer my Rio in a shade of silver or red please. 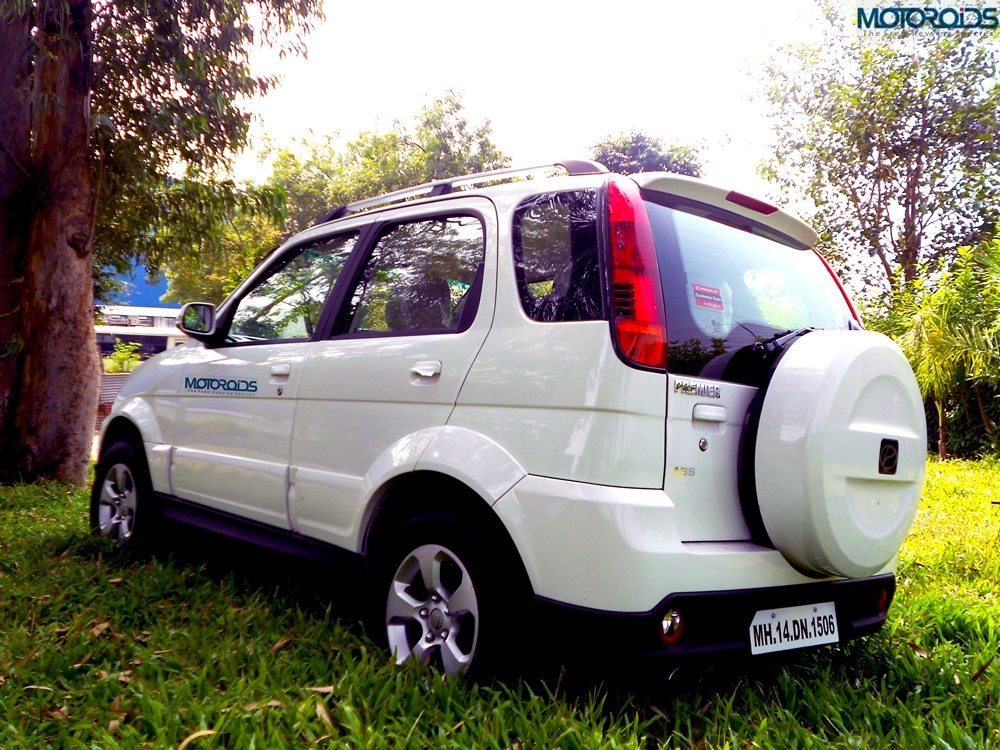 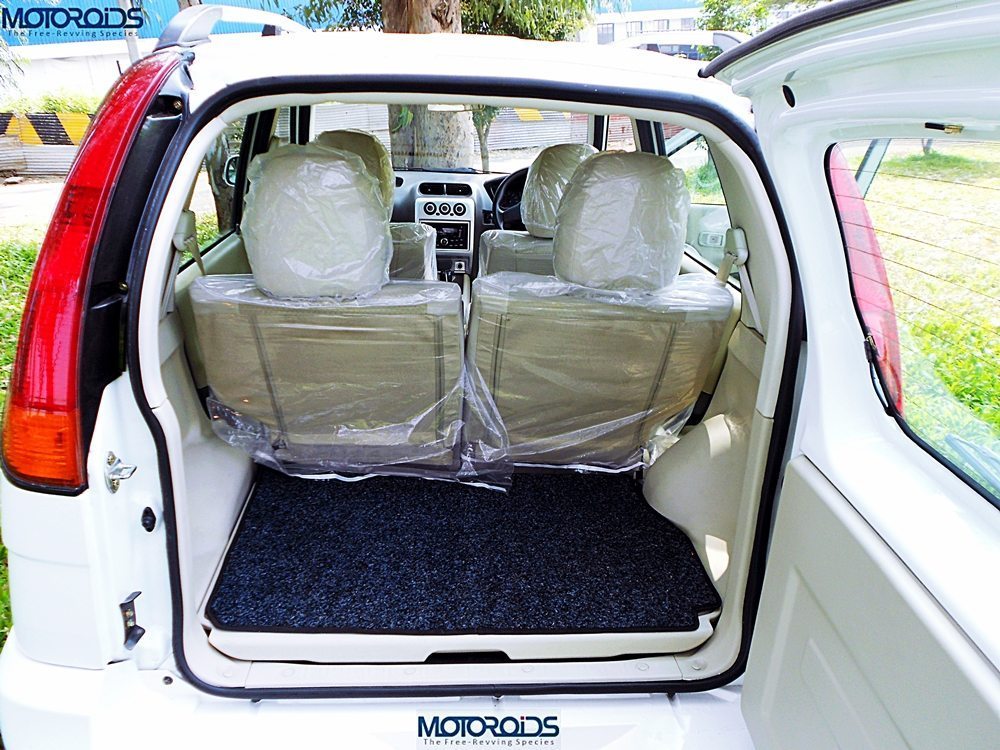 Rio has two rows of seating with split folding bench at the rear. A neat touch is the storage compartment built into the floor of the boot. The interiors are draped in a shade of beige and can easily seat 5 in relative comfort. The dashboard has a design that dates back to the 90s and comes with faux silver garnishing on the centre console. The legroom at front can be best described as average and is easily bettered by the entry level sedans on sale in the country. Worth mentioning here is the fact that the transmission tunnel intrudes a fair bit into the front passenger leg space. Talking about the rear, the leg space here again is pretty average with the passenger sitting comfortably only if the front seats are pulled ahead. However, on setting the front seats all the way back, the leg space gets so bad that any taller than average passenger might see his knees hitting the jaw. The dashboard compartment up front has enough space to hold the necessary documents. However, no sunglasses holder for this SUV. The car also doesn’t have a bottle holder upfront and I wonder what kind of book will fit into that fairly narrow and small magazine holder. Frankly, I am a bit disappointed as the space inside the mini SUV here is more of a mini than being a SUV. 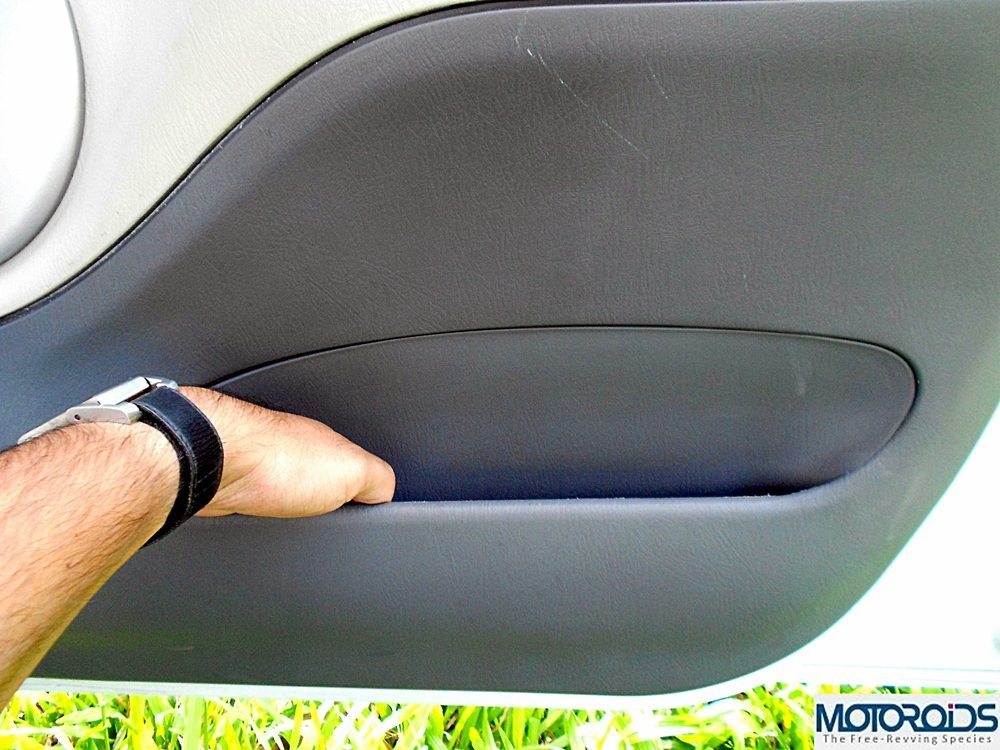 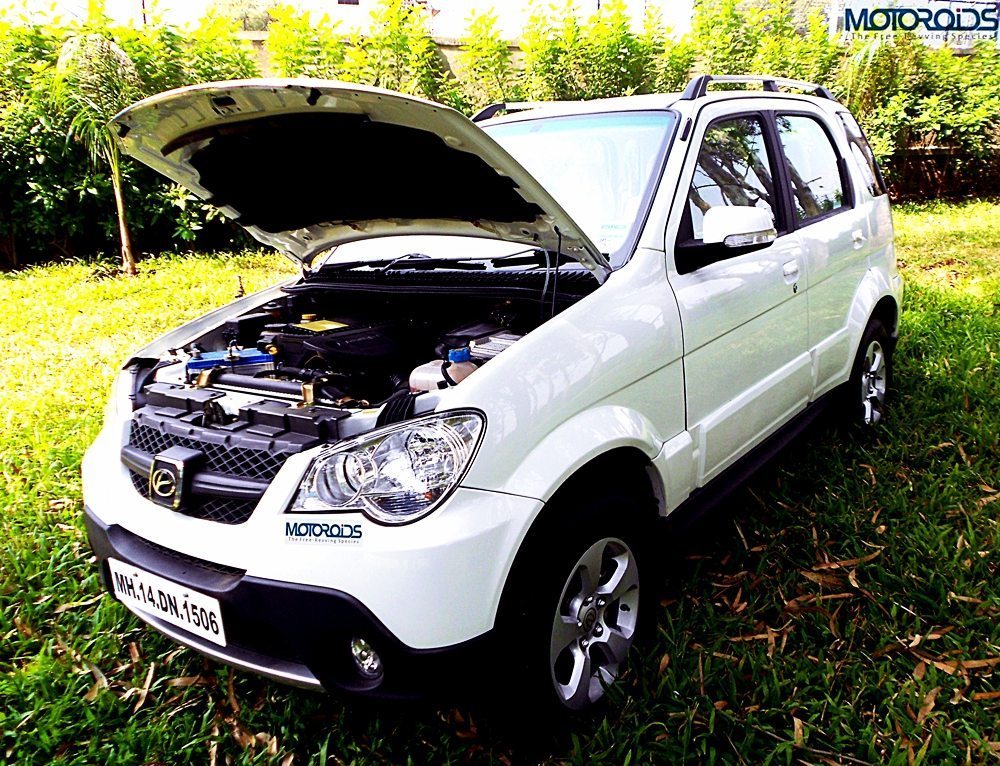 Powering the Premier Rio CRDI4 is a Fiat sourced 1248cc ‘Multijet’ common rail direct injection diesel motor. This is the same engine that powers almost all of the diesel hatchbacks and entry level sedans that are on sale in India. In Premier Rio, the motor pumps out a peak power output of [email protected] and a max. torque output of [email protected] RPM. The Multijet that powers the Rio has less power on paper than in all the other cars it powers

However, Premier has done a remarkably good job with fine tuning the engine and the car feels almost as powerful as every other car with the same engine setup. The Rio CRDI4 is very peppy in nature and the turbo lag is next to non existent. The engine is quick to gain speeds and the power delivery on offer is pretty much linear. The car hits the 100kmph mark in 15 seconds and the top whack is around 140kmph. The gearbox offers smooth shifts and the only grouse is the slight hiccup that often crops in when shifting between 3rd and 4th cog. The gearing of the Premier Rio CRDI4 is more suited to city driving than high speed ghat sections and expressways.

The NVH levels on the Premier Rio CRDI4 are quite on the higher side and the diesel clatter is very audible inside the cabin, even with  windows rolled up and aircon on full blow. This is an area, and almost the only one in this department, that Premier needs to look into. 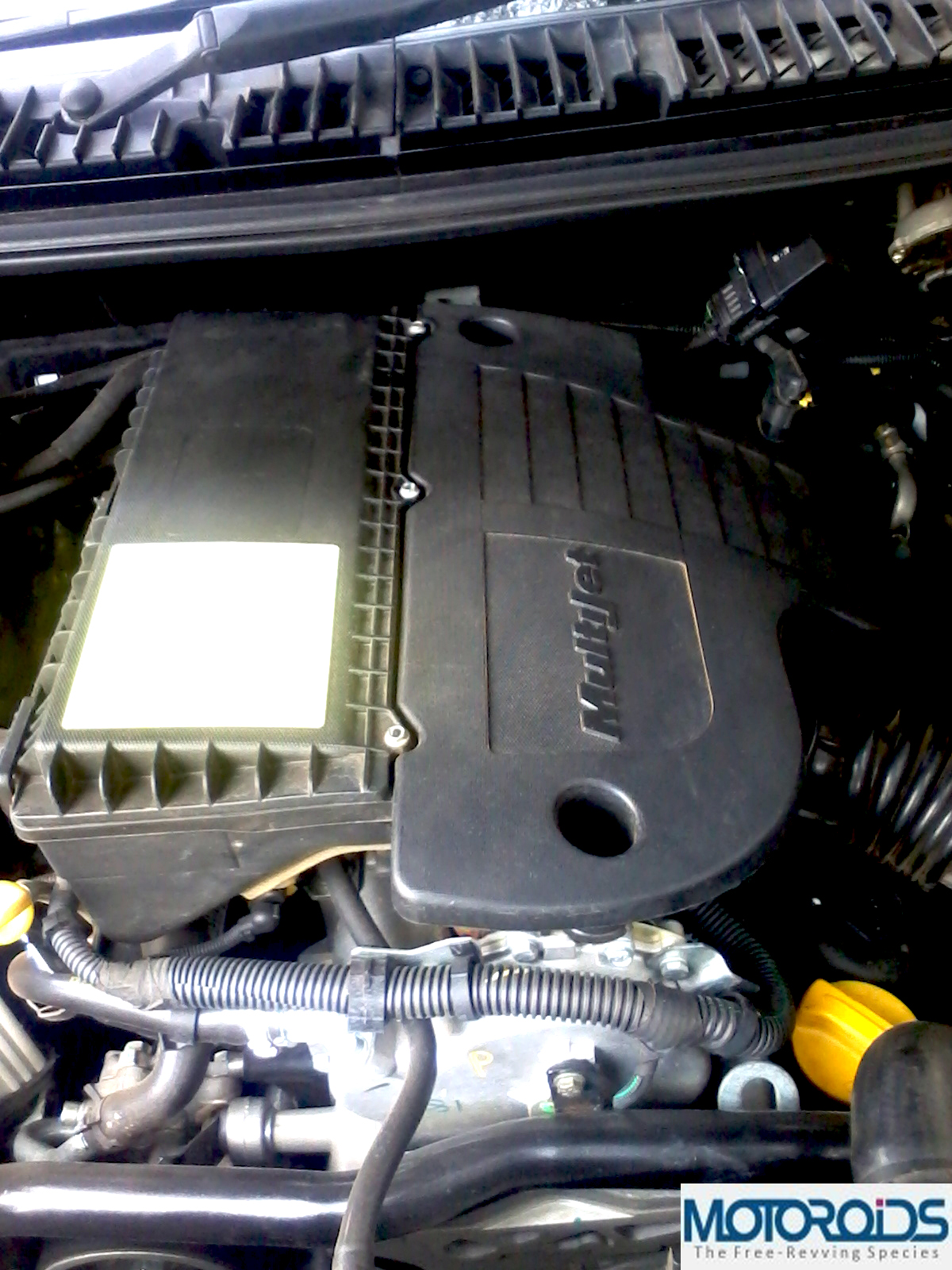 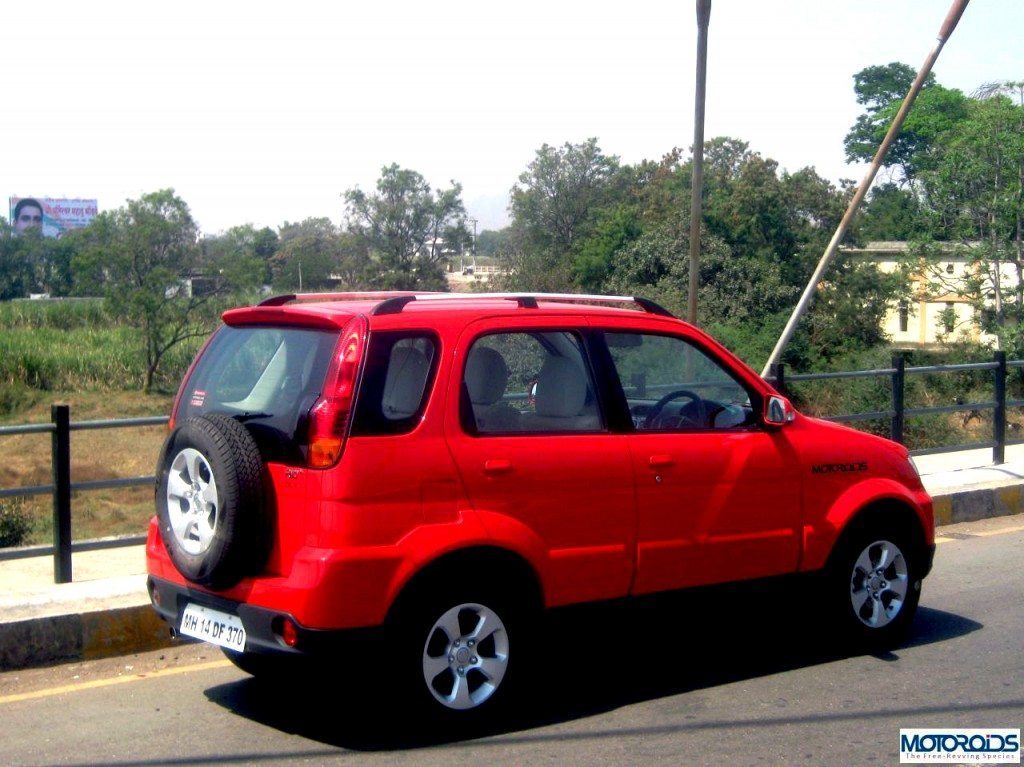 Rio comes with 15 inch wheels that are shod with 205/70 cross section tires. The car has 200mm of ground clearance and employs McPherson struts at front and 5 rods system at the rear. The ride quality of the Rio is surprisingly good and can put to shame some of our hatchbacks. The car can absorb most of the average sized craters quite well and thanks to the excellent ground clearance, does not scrape its underbelly on those devastating speed breakers that our roads are famous for. Simply speaking, the car easily deals with most of the rough roads out there. While the suspension absorbs most of the irregularities out there, it does makes the passengers know about the kind of hard work it is putting up to. No magic carpet rides here.

Talking about handling, let me clearly mention that my expectations with a ‘SUV-ish’ car and one that comes from China were never really high. And as expected, the car did not turn out to be a winner in this department. While the Rio comes with a reasonably grippy set of tires, the steering feels disconnected with wheels and the feedback is not all that great. The body rolls a fair bit even in moderate speed corners and overall, it fails to inspire much confidence. This is one rear wheel drive car that I never wanted to go drifting in. And I didn’t. 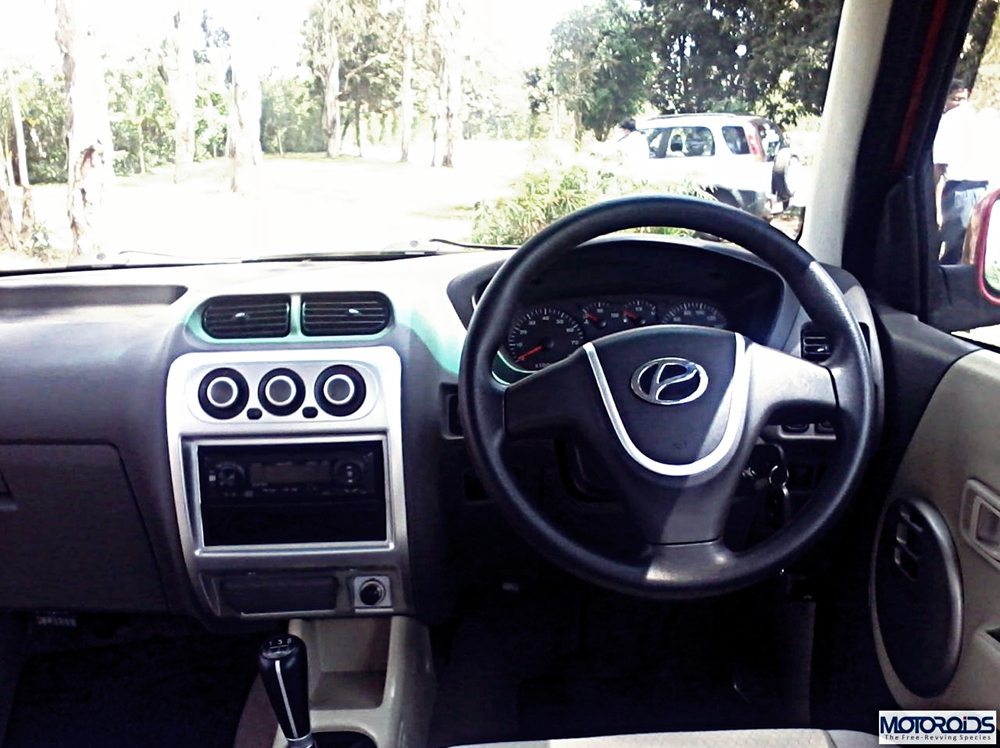 The car might look sporty and rugged from a distance but one of the first things you will notice when getting inside it is how light the doors feel. Expecting the doors to shut with a thud is like hoping for Indian football team to win the world cup. Once inside, you are greeted by shiny, beige and hard plastics all around you. The dash board’s shiny plastic reflects on the windscreen. While the seat fabric feels of good quality, the plastics feel like they have been borrowed from my 1997 Maruti 800. The panel gaps around the dashboard and in several other places within the cabin are quite pronounced, and not quite acceptable by today’s standards and norms. The only good thing here is that nothing is really prone to fall off and the plastics feel like they will stick together for a while. 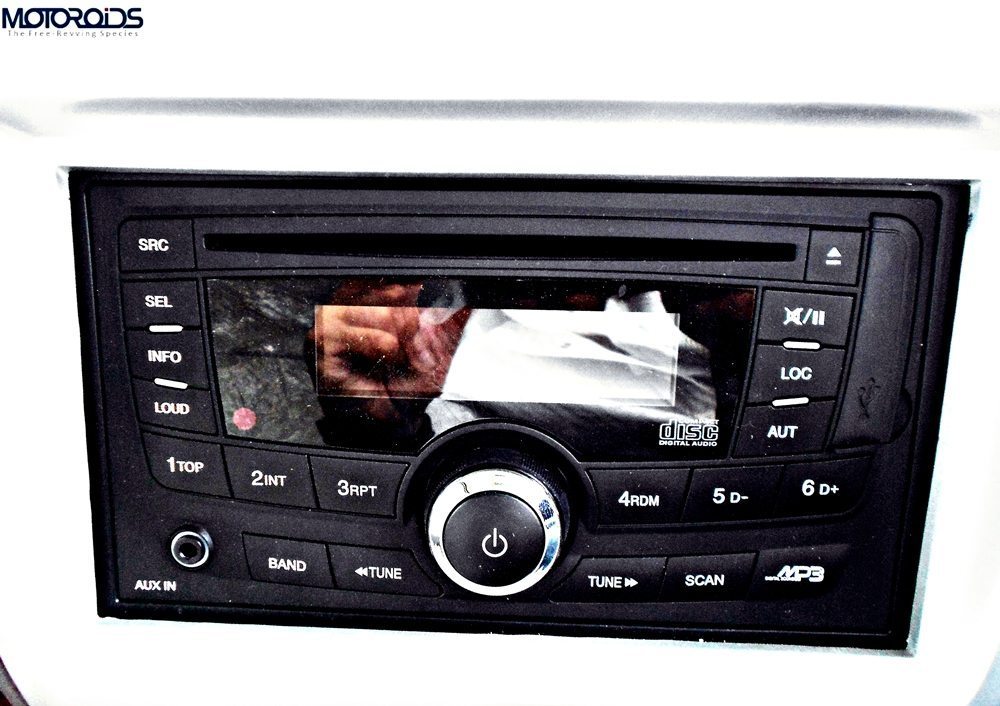 Now this is where the Rio scores. The top of the line car boats of many creature comforts, representing good value. The Rio has everything from HVAC and power steering to powered windows upfront, central locking with remote built into the key, a 2 DIN 4 speaker MP3 CD player/FM radio with reasonable sound quality, electric ORVMs, rear wash wipe and ABS. That list surely makes up somewhat for the lost points by offering some good features. 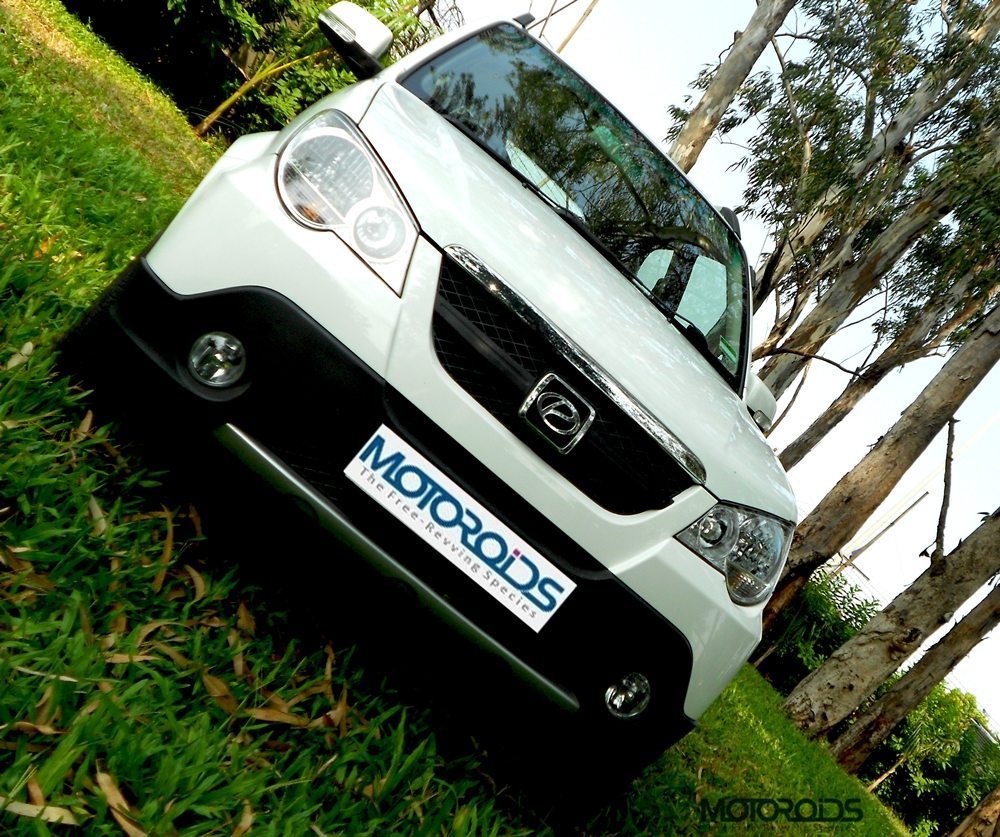 The Premier Rio looks and feels rugged and little issues apart; the car can make for a reasonable regular car. The Rio targets the premium hatchback or entry-level sedan buyer. Also, this has to be the best way to stand apart in a crowd of hatches on our roads. The new Premier Rio CRDI4 is an easy way to enter the compact SUV territory and is quite well priced for what it offers.

Premier wants to feel that its latest baby caters to the niche market and we have no reason to question their belief. The Premier Rio, with the Multijet engine and light controls, can be the perfect vehicle for soccer moms of our metros. Also, the tried and tested engine, along with cheap spares, should offer enough peace of mind to the buyers. Premier is slowly trying to re-gain its foothold in Indian car market and is gradually expanding its dealership network which currently stands at 50 centers across country. Premier also offer PASS, its roadside assistance to the Rio owners.

Corrigendum– The earlier rating, which was out of 10, was incorrect and has now been rectified. We are really apologetic for the big goof up and pledge to be more careful henceforth.