After belting two premium SUVs back to back, it was now time to get back to the sedan scheme of things. Welcoming the change was the new 2017 Skoda Octavia. A car that has been bridging the gap between value and luxury for a long time now. And as we found out, with a new face, it still manages to do that exceedingly well and offers truckloads of premium, without the need for you to break the bank and go all-out German. 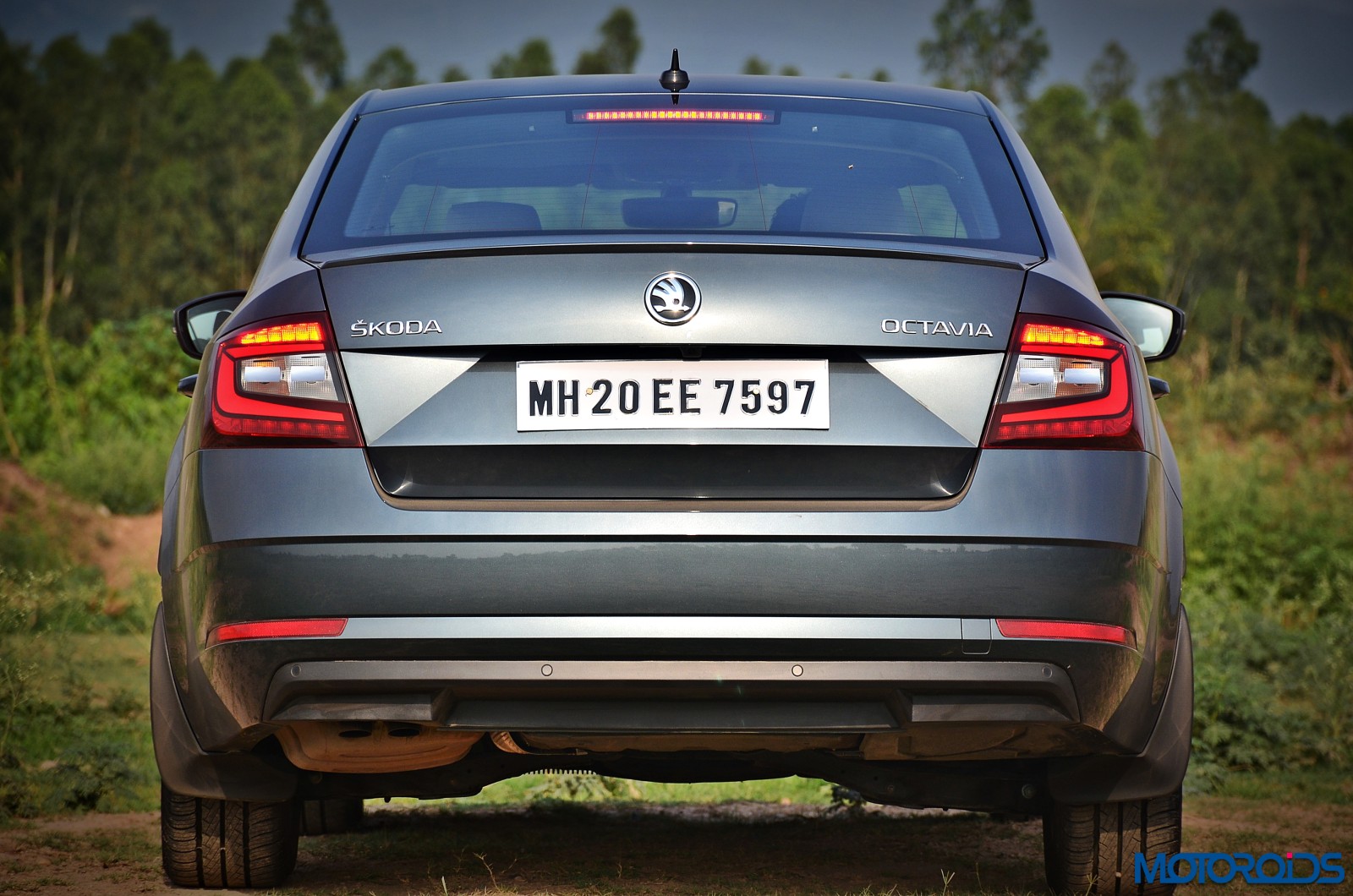 To top it all, brand Skoda has been investing a lot of time, efforts and money to reach out to their customers. Proof? They are now offering a 4-year/100,000 km warranty, a 4-year on-the-go, 24/7 assistance program, and a 4-year/60,000 km maintenance package that entails to four periodic maintenance services at an interval of 15,000 km or one year, for Rs. 39,999. They’ve made earnest efforts to transform the dealership and after sales experience, have made billing more transparent, and there’s now a MySkoda App which maintains your car’s service history, has an inbuilt service cost calculator and lets you book a service too. Back to the car in question now. 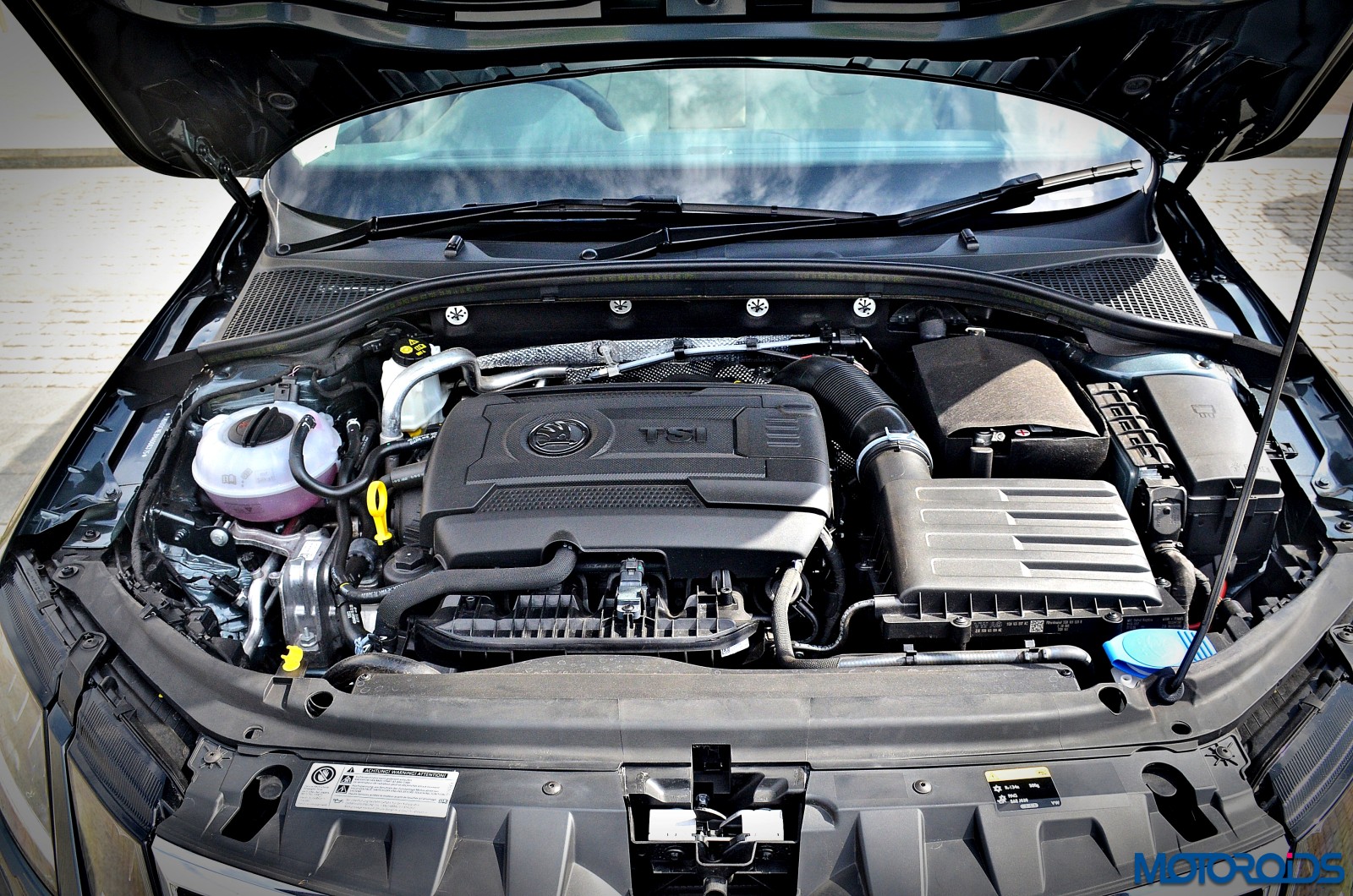 Three engine choices are on offer – a 1.4 and a 1.8-litre TSI petrol, where the former is paired to a 6-speed manual, while the latter is conjoined to a brilliant 7-speed DSG. The 2.0-litre TDI can be had either with a 6-speed manual or a DSG with as many ratios. Our experience began with the explosive 1.8-litre petrol which we managed to spank around for a brief duration on the outskirts of Chandigarh. 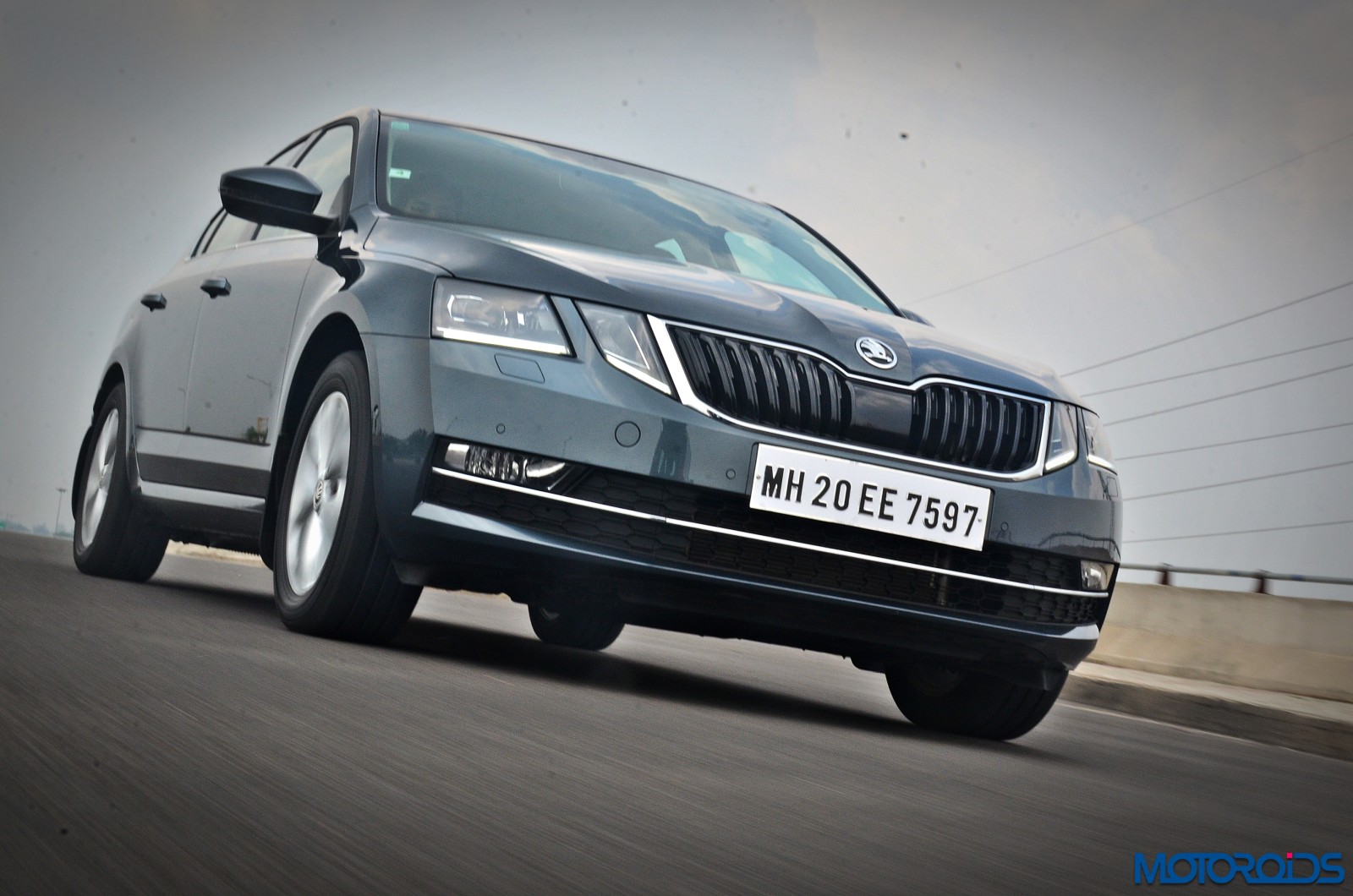 For numbers, the 1.8 TSI develops 180 PS of power between 5100 – 6200 rpm and 250 Nm of twist between 1250 – 5000 clicks. Power delivery is immediate, where that intelligent and blazingly fast gearbox harnesses all the goodness and throws it at those front wheels with amazing immediacy. At part throttle, the gearbox keeps cycling between cogs with such smoothness and linearity, none of the shift points can be perceived. 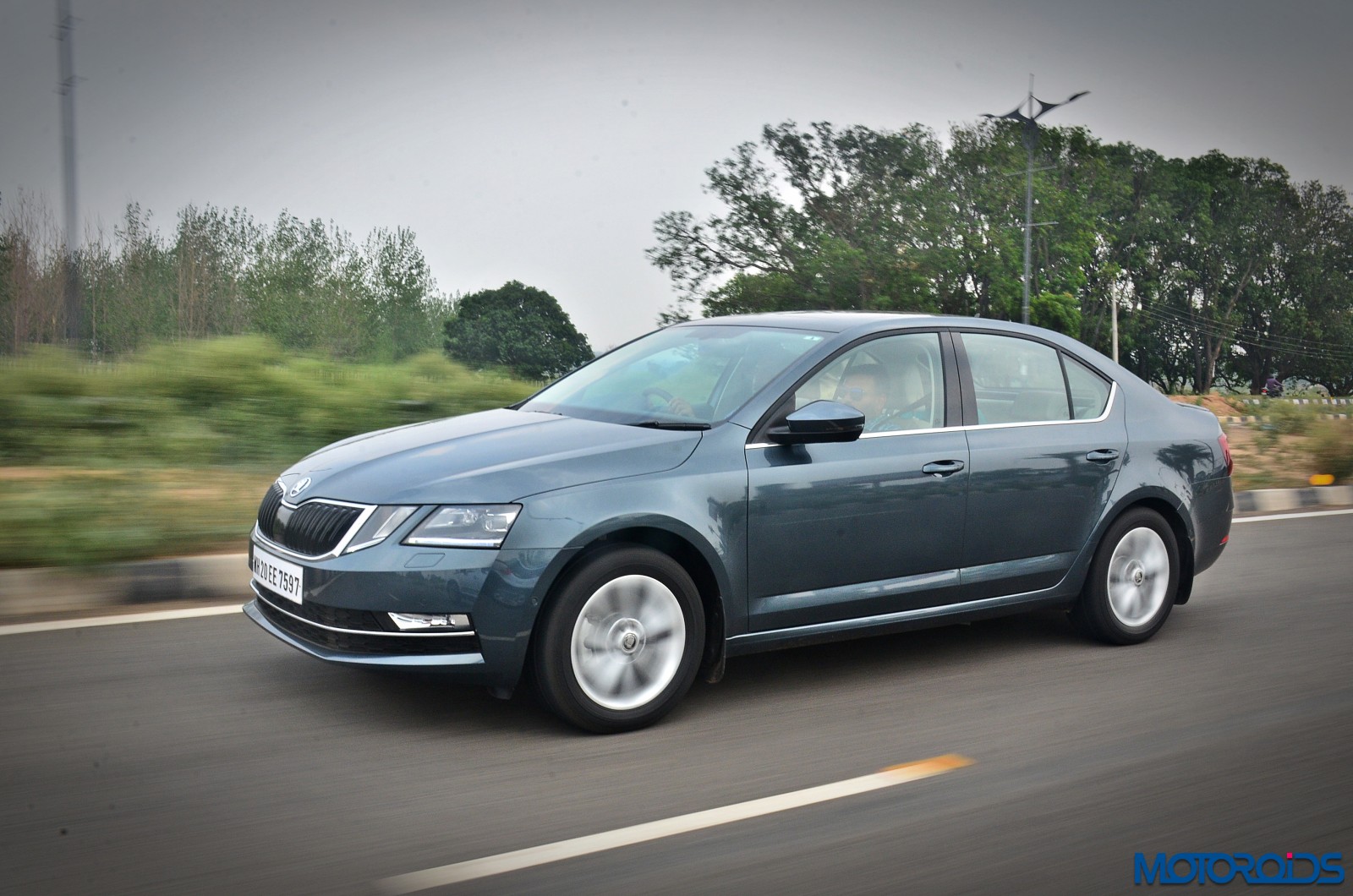 But the magic that engine and gearbox combo entertains with is best enjoyed through the switches behind the wheel. Smashed acceleration invites some amount of wheelspin, even for a car that has been civilised by several electronic assist features. But then keep at it and the engine will rev cleanly till about six and a half, filling the cabin with a note that is seriously sweet. Things get even more melodious when you tackle a series of bends and run down the box as it blips out some more sweetness. 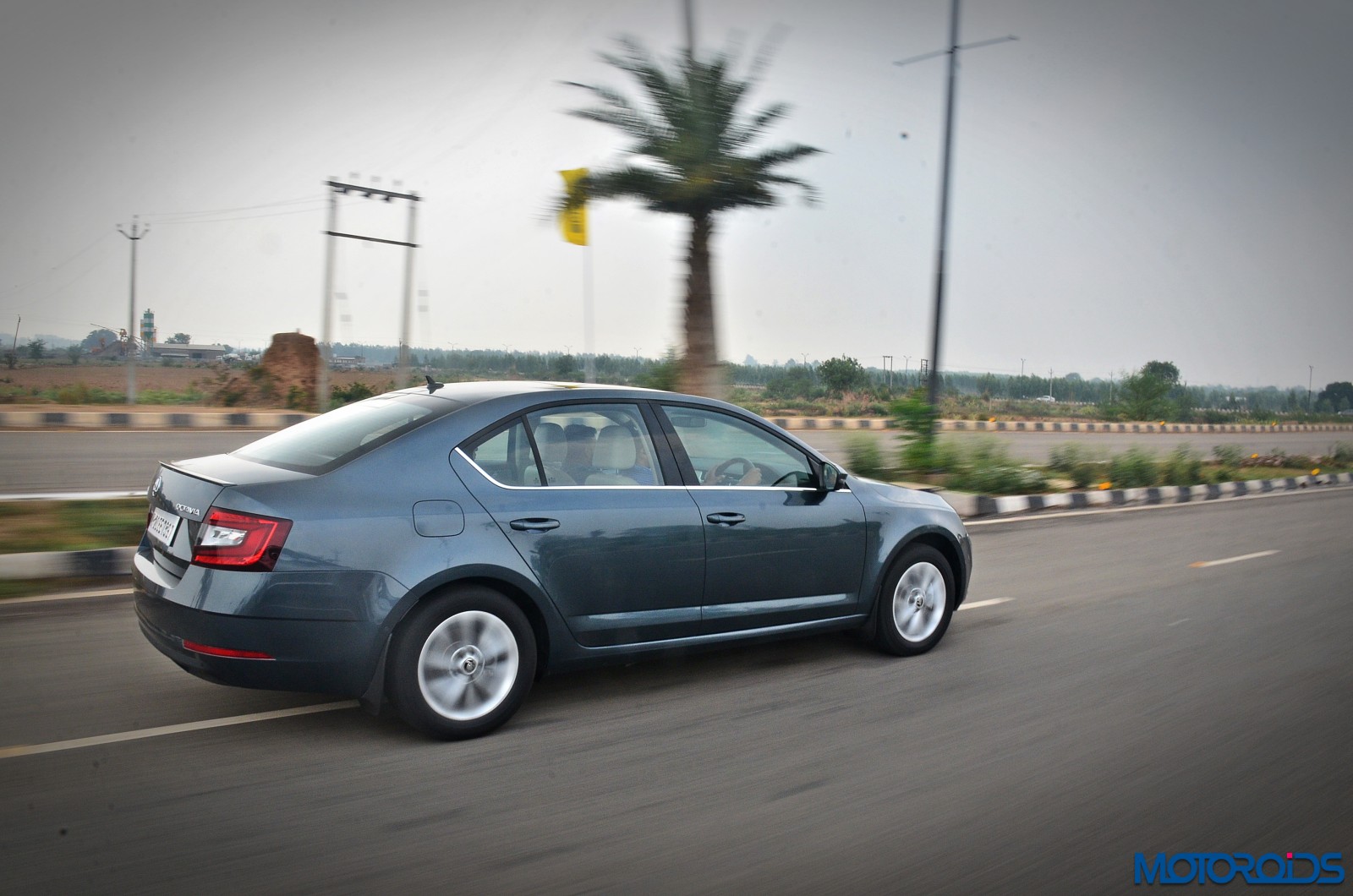 The 1.8 motor scoops out heavy quantities of goodness for your right foot to lick it clean. Also, makes the new Octavia attain serious speeds in quick time. Backed by an intelligent gearbox which also lets you have some fun, this petrol motor makes the Octavia an engaging and rewarding car to drive. And then they told us they’ve lined up a tastier VRs variant which will be launched this year itself. 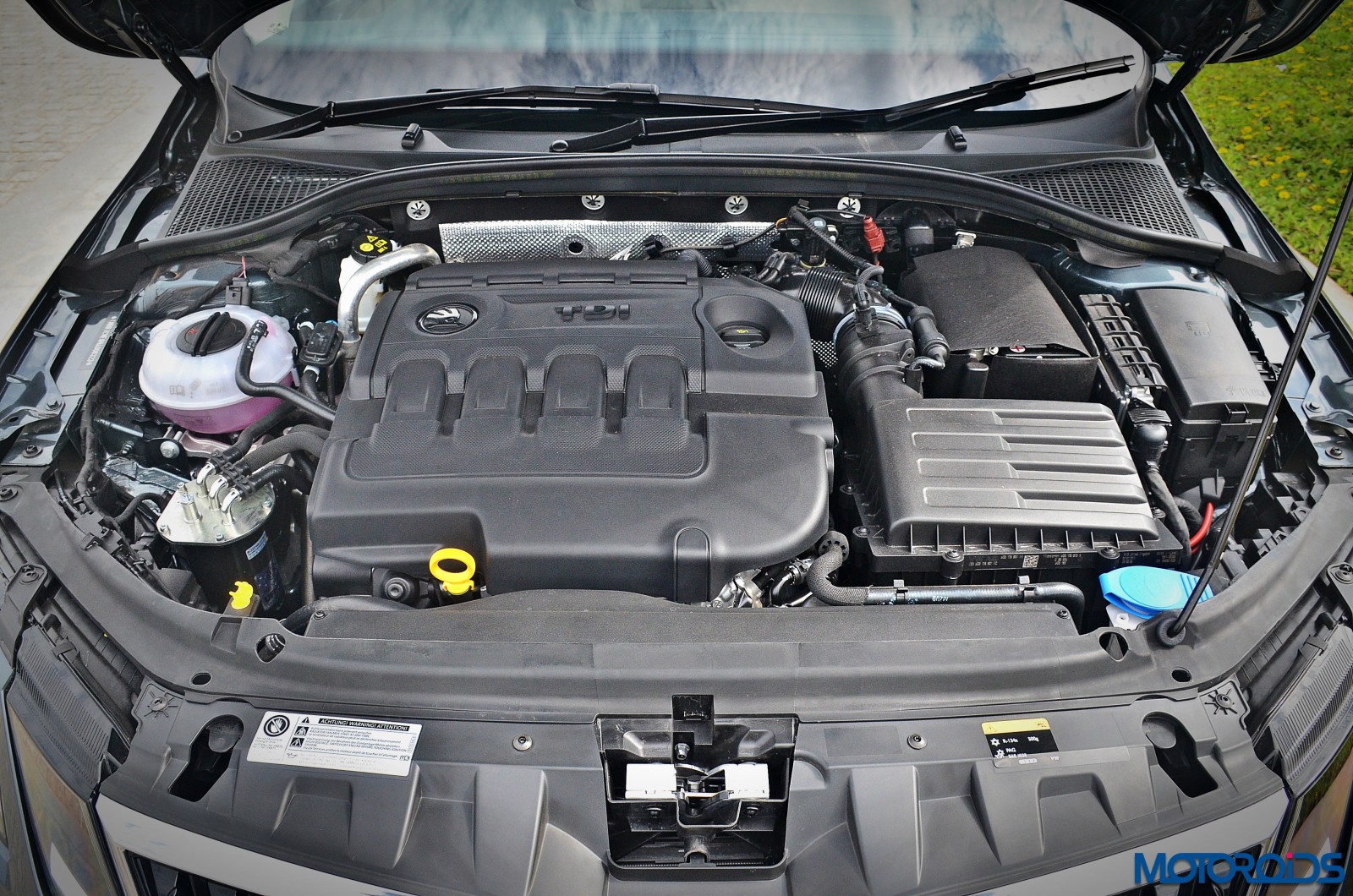 Although rated for an official figure of 15.1 kpl, you’d be nowhere close to that number if you exploit all the 180 PS of goodness from that 1.8 TSI motor at will, which you will. So if you’re after the niceties the new Skoda Octavia has to offer and want it paired to an efficient, yet competent drivetrain, the 2.0-litre TDI is the motor to opt for. You may pick between a 6-speed manual or a DSG box, rated for 21 kpl and 19.5 kpl respectively. 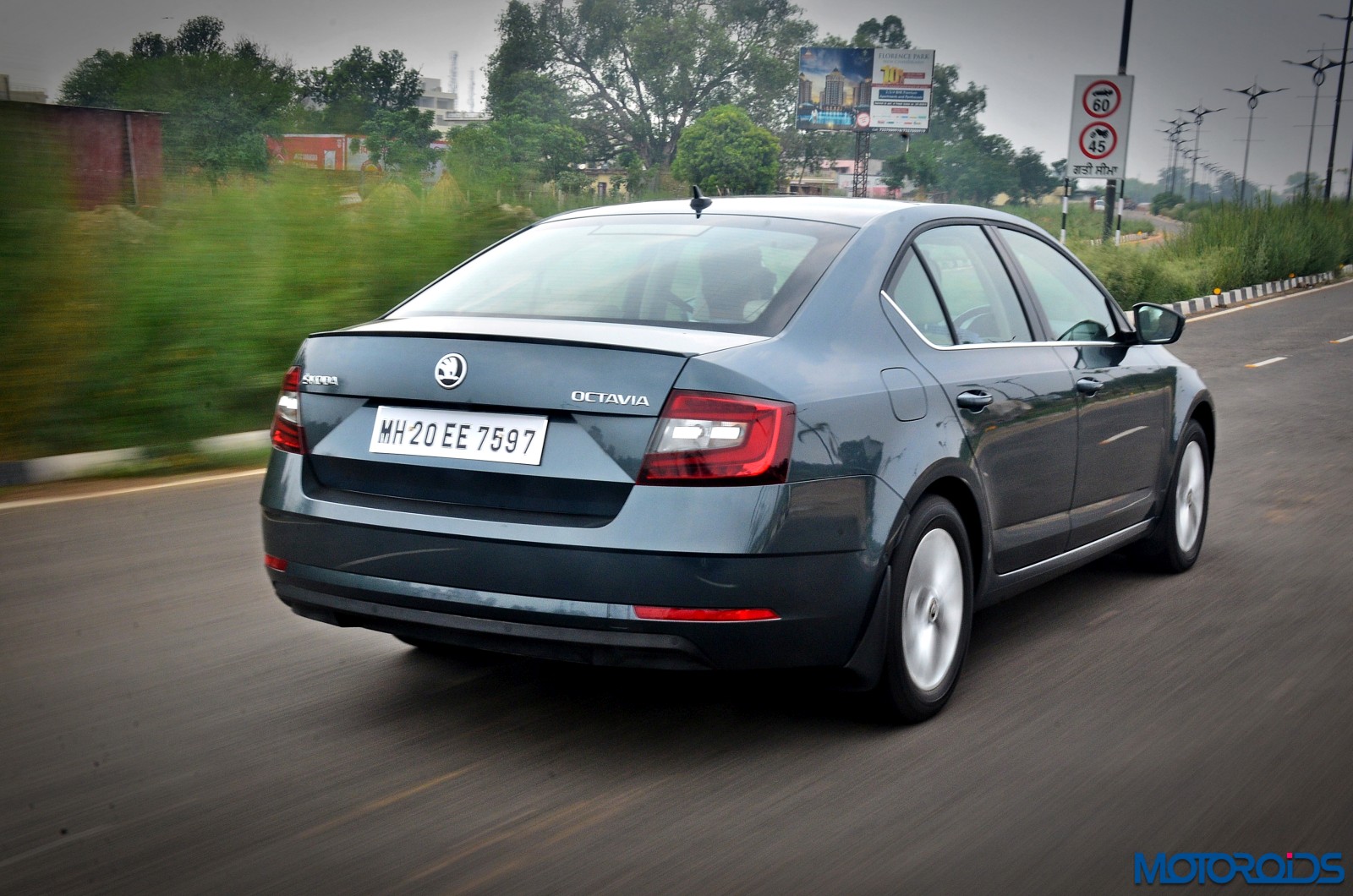 As is the case with most modern turbocharged diesels, there is a hint of lag before all of that 320 Nm of twist, spread out between 1750 – 3000 rpm kicks in. However, driveability is aided greatly by the intelligent gearbox which is quick to understand the position of your foot and then skillfully masks the initial vacuum. A noticeable surge in power starts to kick in around the 1,600 rpm mark and from there on, the engine is always in a healthy state of tune. We couldn’t really push it too much, taking into account the urban environs we drove the car in. However, it settles into a lazy cruise, the engine spinning at 1,900 rpm in 6th gear at an indicated 100 kph. What we could not grow fond of though is the drone from the diesel engine, which is always apparent inside the cabin unless you’re feathering the throttle and cruising at comfortable speeds. 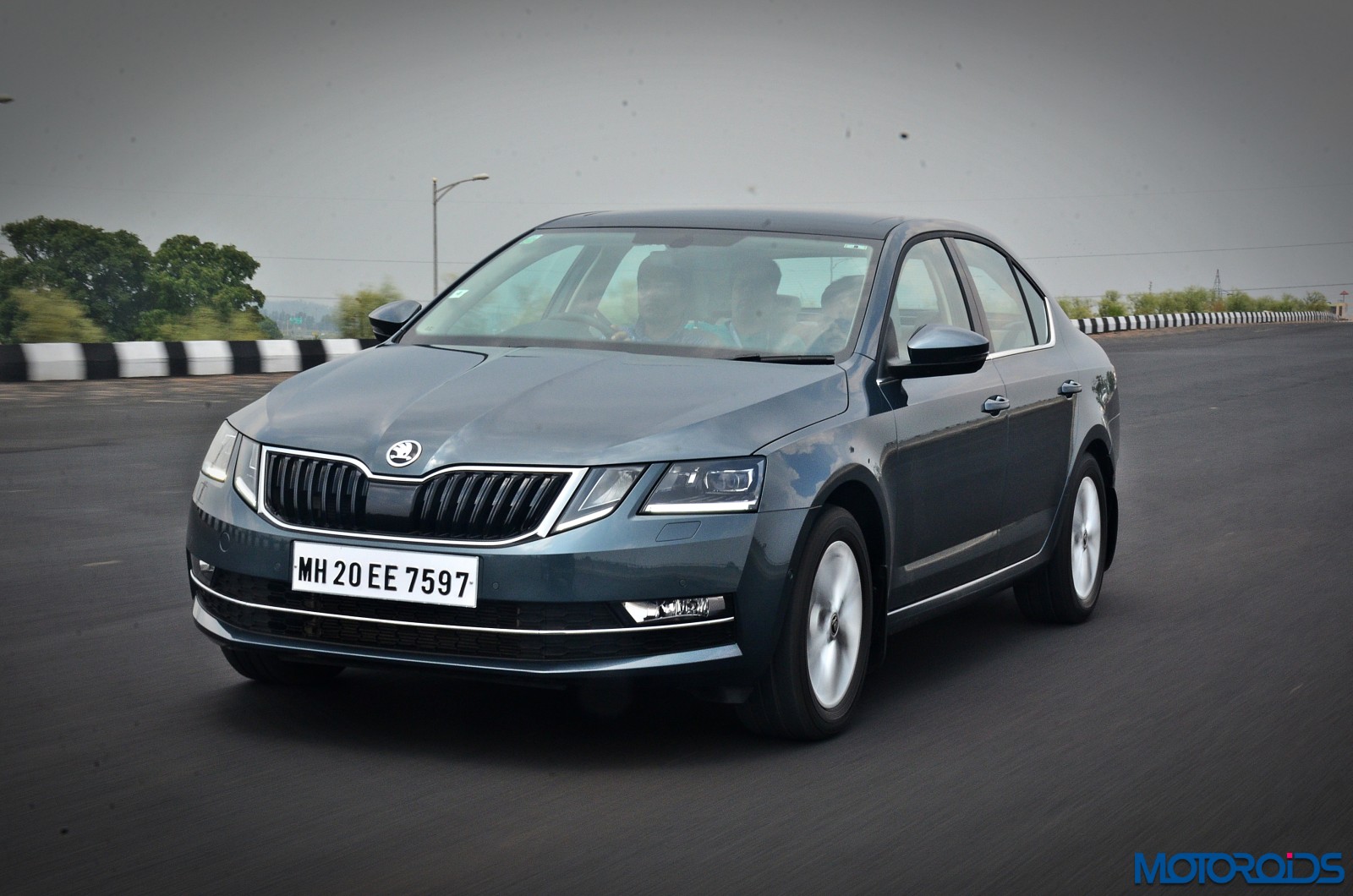 The new Skoda Octavia’s ride has a well-damped feeling to its firmness. Skoda has kicked out the rear wheels to make the track wider, which now results in enhanced straight line stability. On the move, the Octavia’s typically European roots are very evident as it makes its way forward with unshakeable composure. High-speed manners are praiseworthy, although the modern steering system won’t offer any feels. It is agile and will precisely place the wheels where you want them to be though. Around bends, there is a tiny amount of roll which creeps in, but for a family sedan, the Octavia gets around really well. Brakes do a fine job of hauling the car down from high speeds, keeping things tidy and in line. 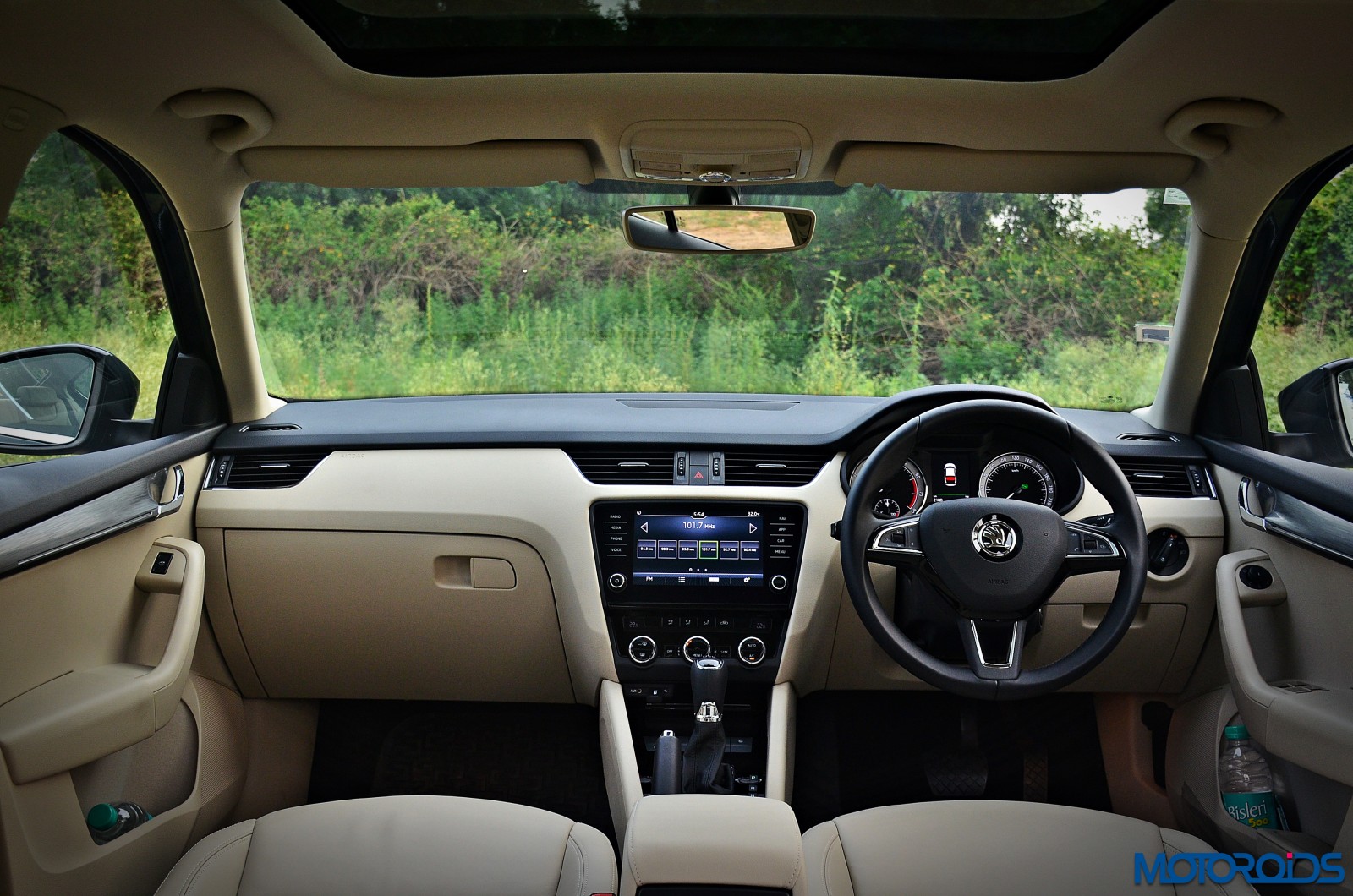 The face-lifted Skoda Octavia feels rich and premium inside, where the addition of a host of new features have brought it up to speed with current market demands. An electronically adjustable driver’s seat gets two memory buttons, along with adjustable lumbar support. One their own, those front chairs are supportive and really comfortable once you’re settled in. 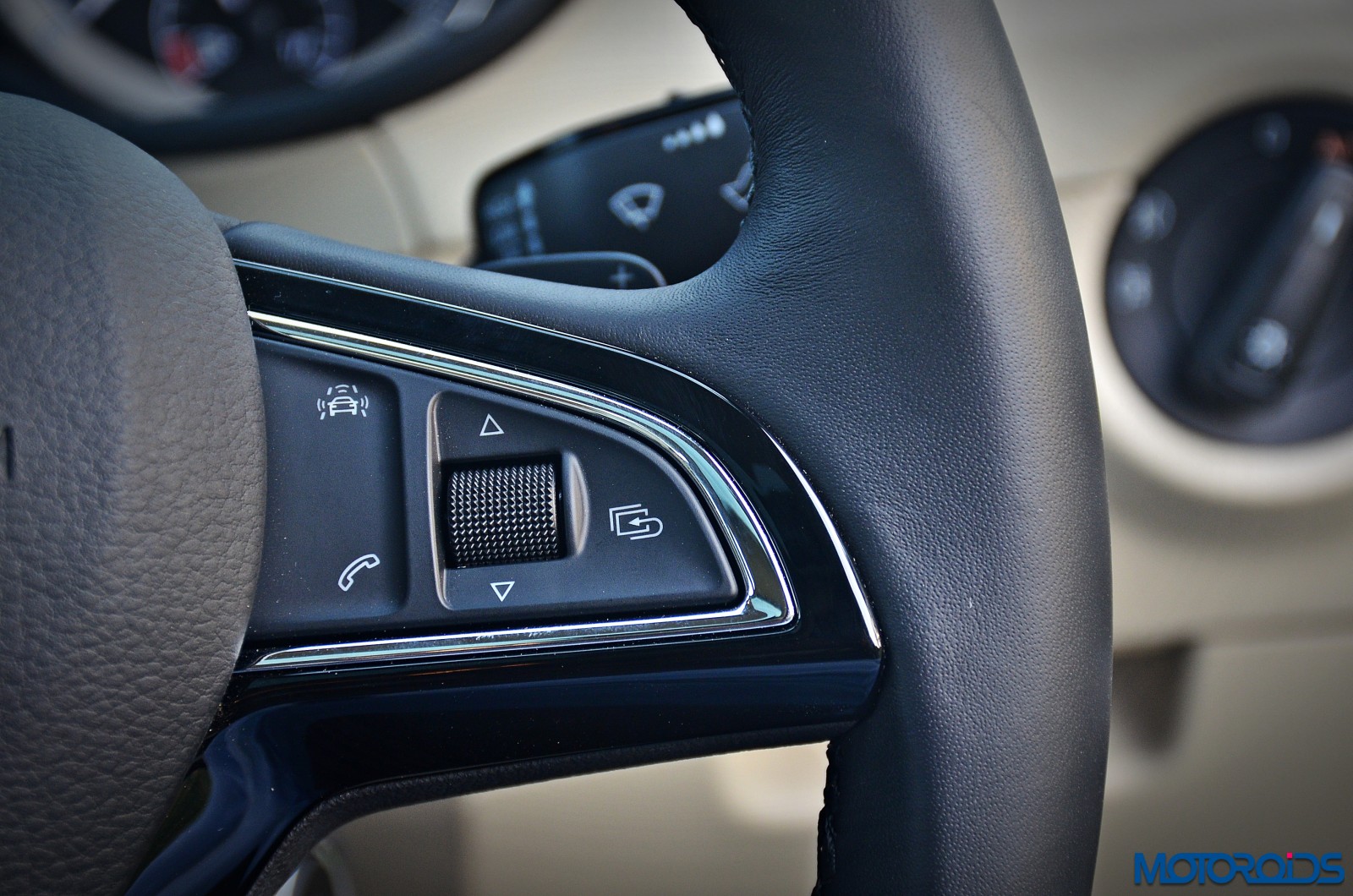 A perfectly round steering wheel has these nice soft touch buttons which operate a crisp looking MID screen that will display all the information you want while on the move. We particularly like how a single dial on the left-hand side also acts as a button and makes navigating through various menus such an easy affair. 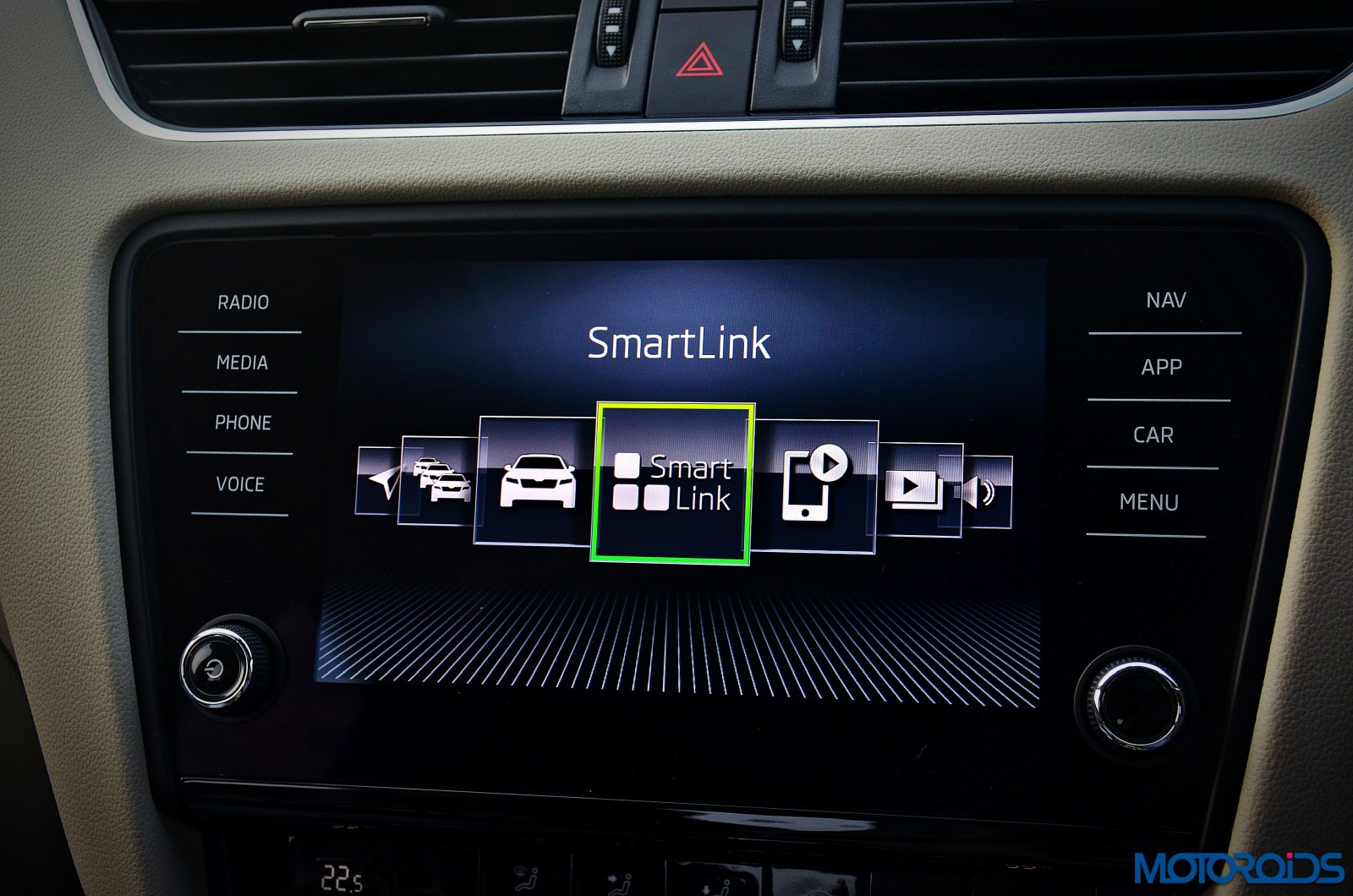 The highlight inside is a new 8.0″ touchscreen infotainment system, which has ditched all of its buttons completely in favour of touch sensitive switches. You still get two dials though, one for volume, the other to scroll around. We like. The screen operates with amazing smoothness and looks crisp. There is almost no lag between your touch and the desired action, which speaks highly of the quality of that unit. Audio output too is great, with most of the details coming out crisp and distortion free even at high volume levels. 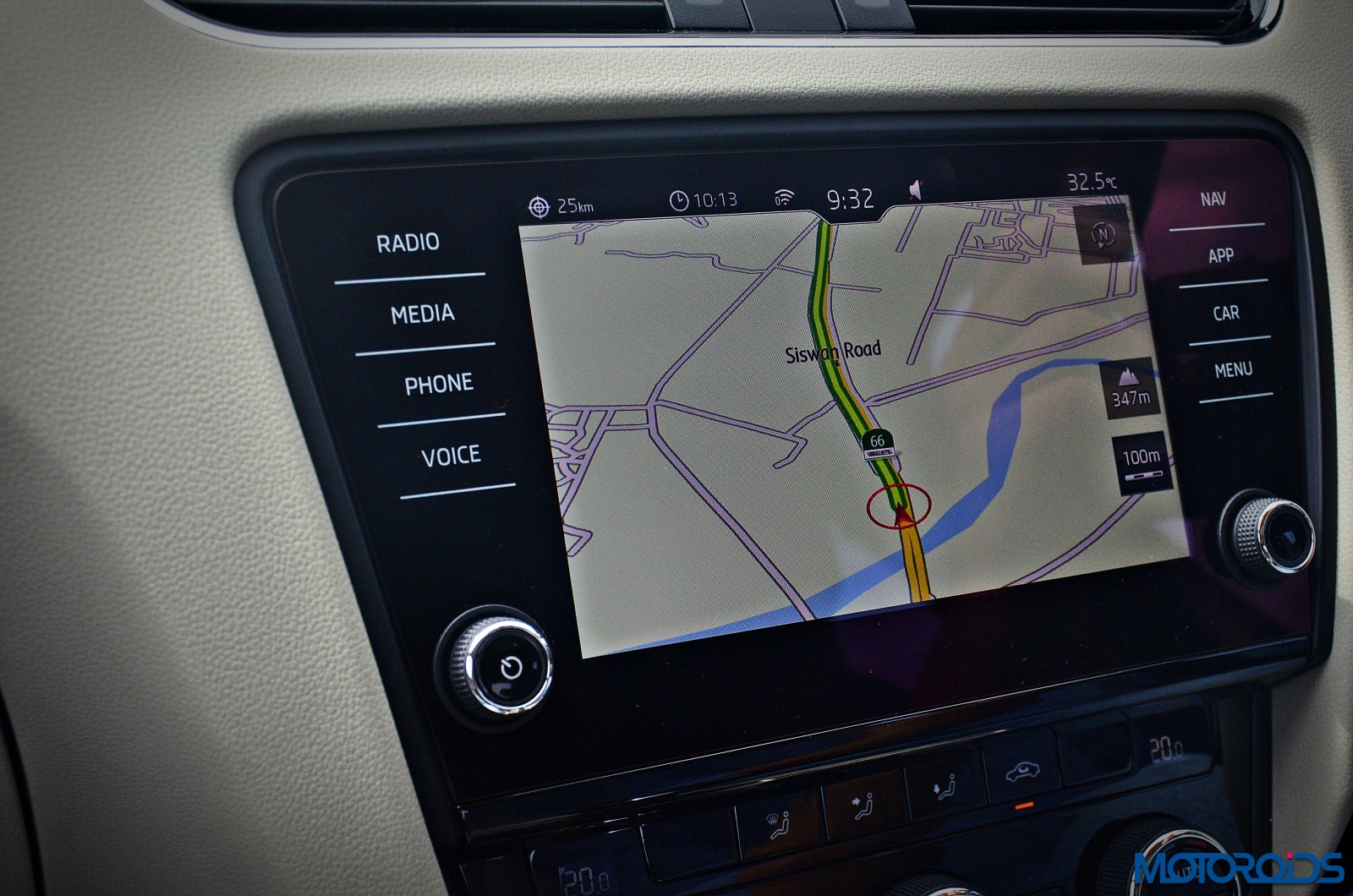 There’s an inbuilt Amundsen navigation system which works pretty well. But in addition to that, the new infotainment system is also CarPlay, Android Auto and Mirrorlink compatible. A neat new feature is a BossConnect app which can be installed on any of the passenger’s phone and it will then let them control the infotainment system through it. 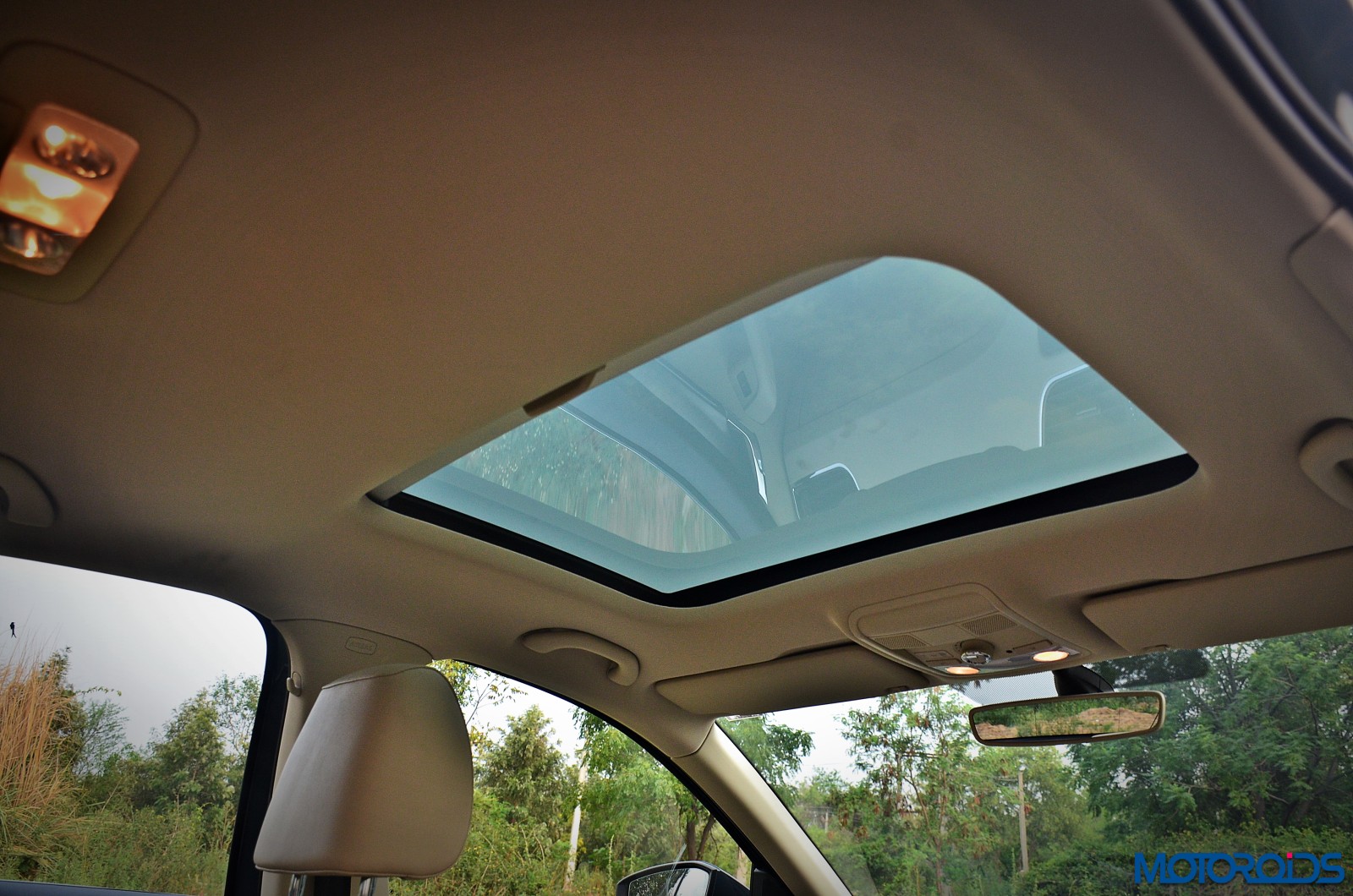 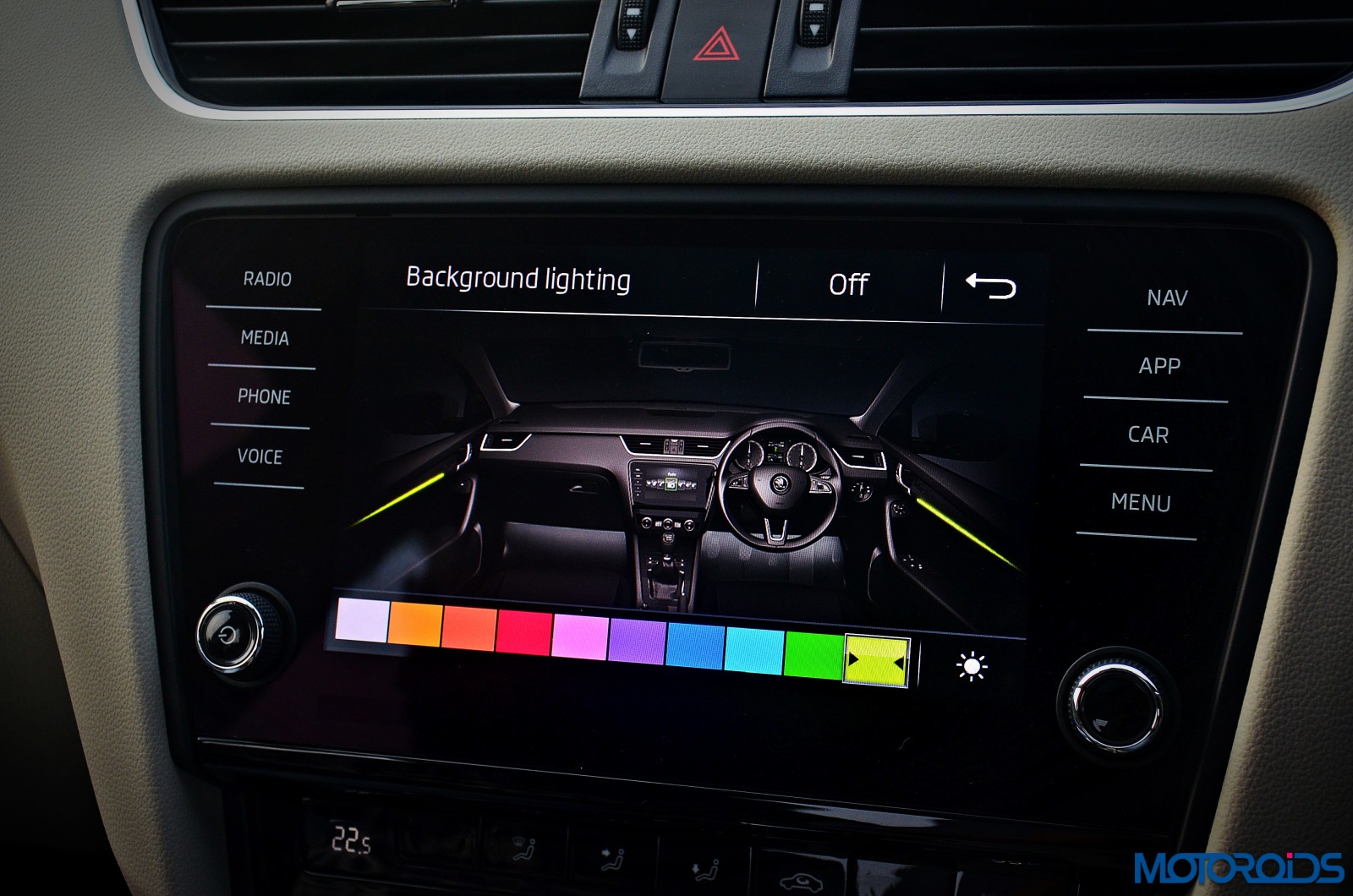 Ambient lighting can switch between ten different colours. A luxury we last knew is only available on cars which are several segments higher 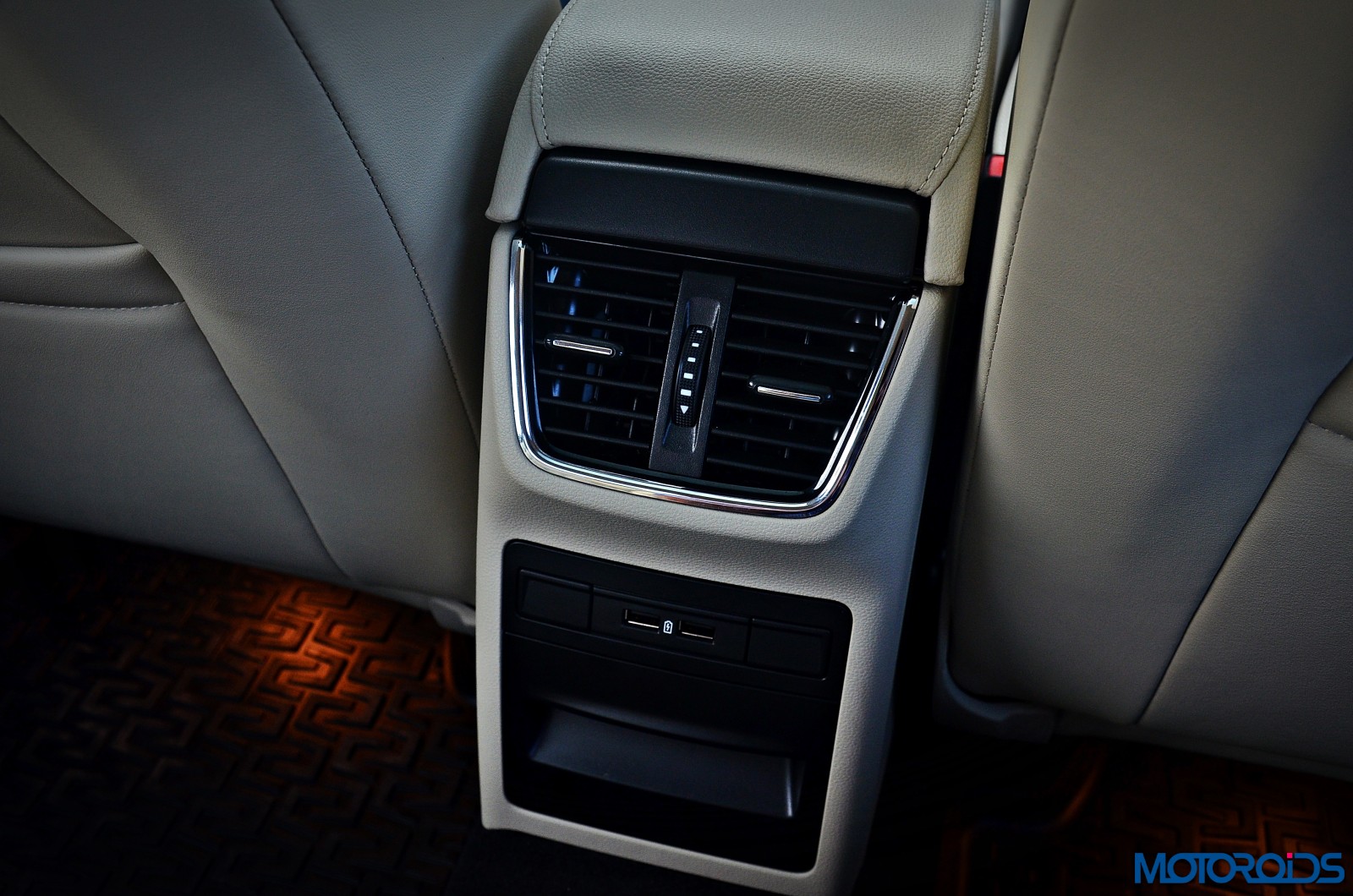 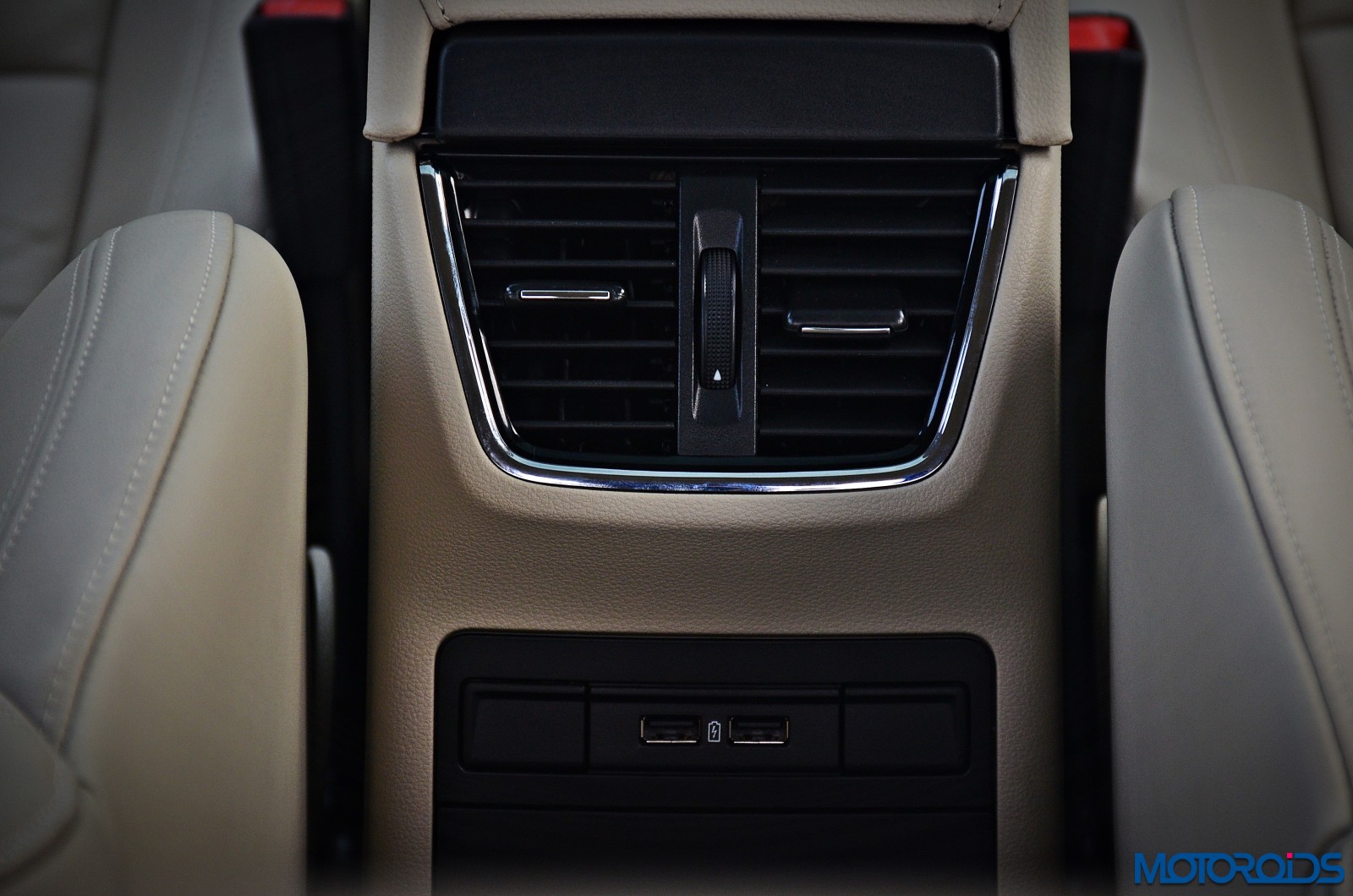 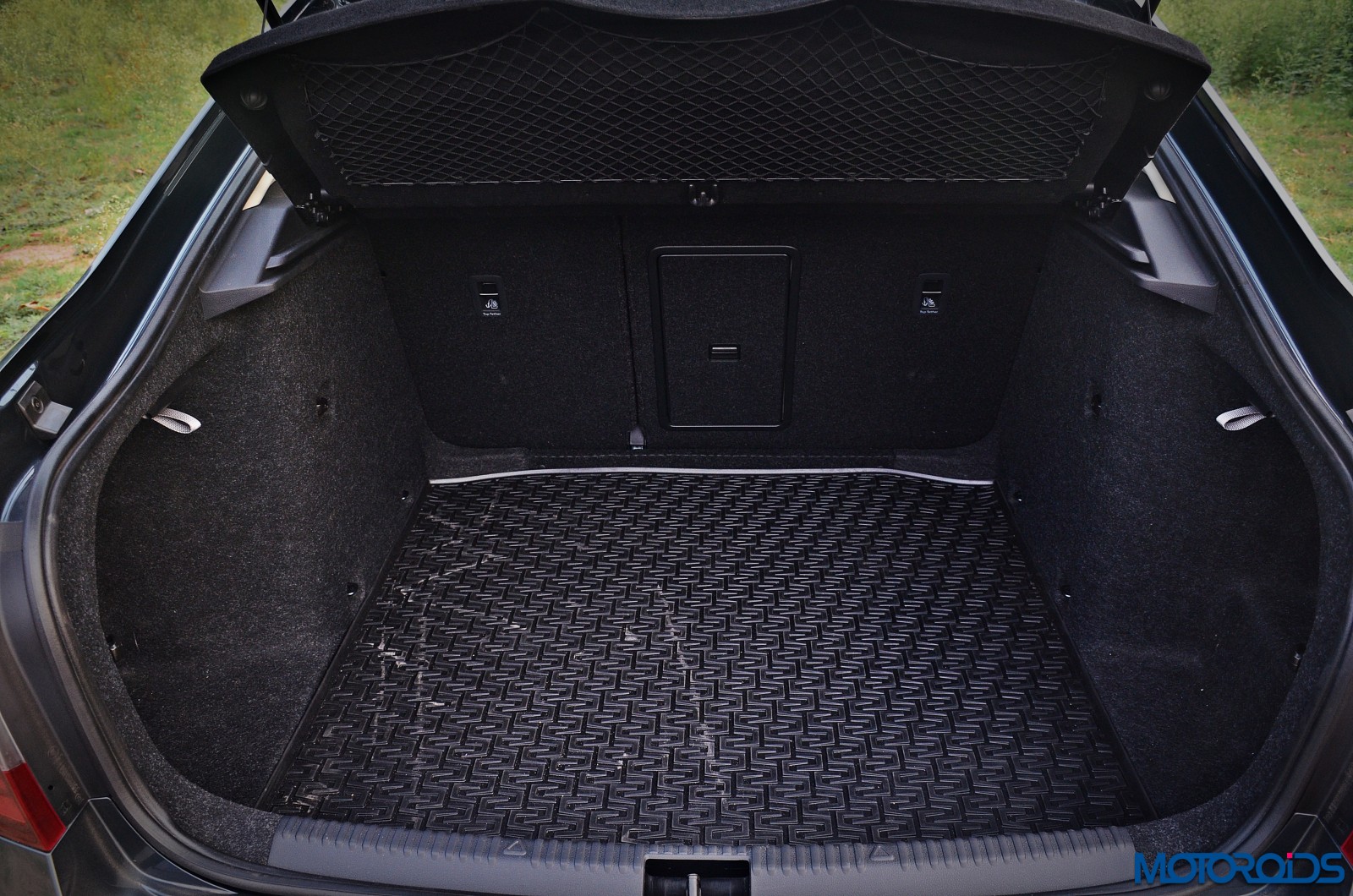 Boot space just like the older car is massive 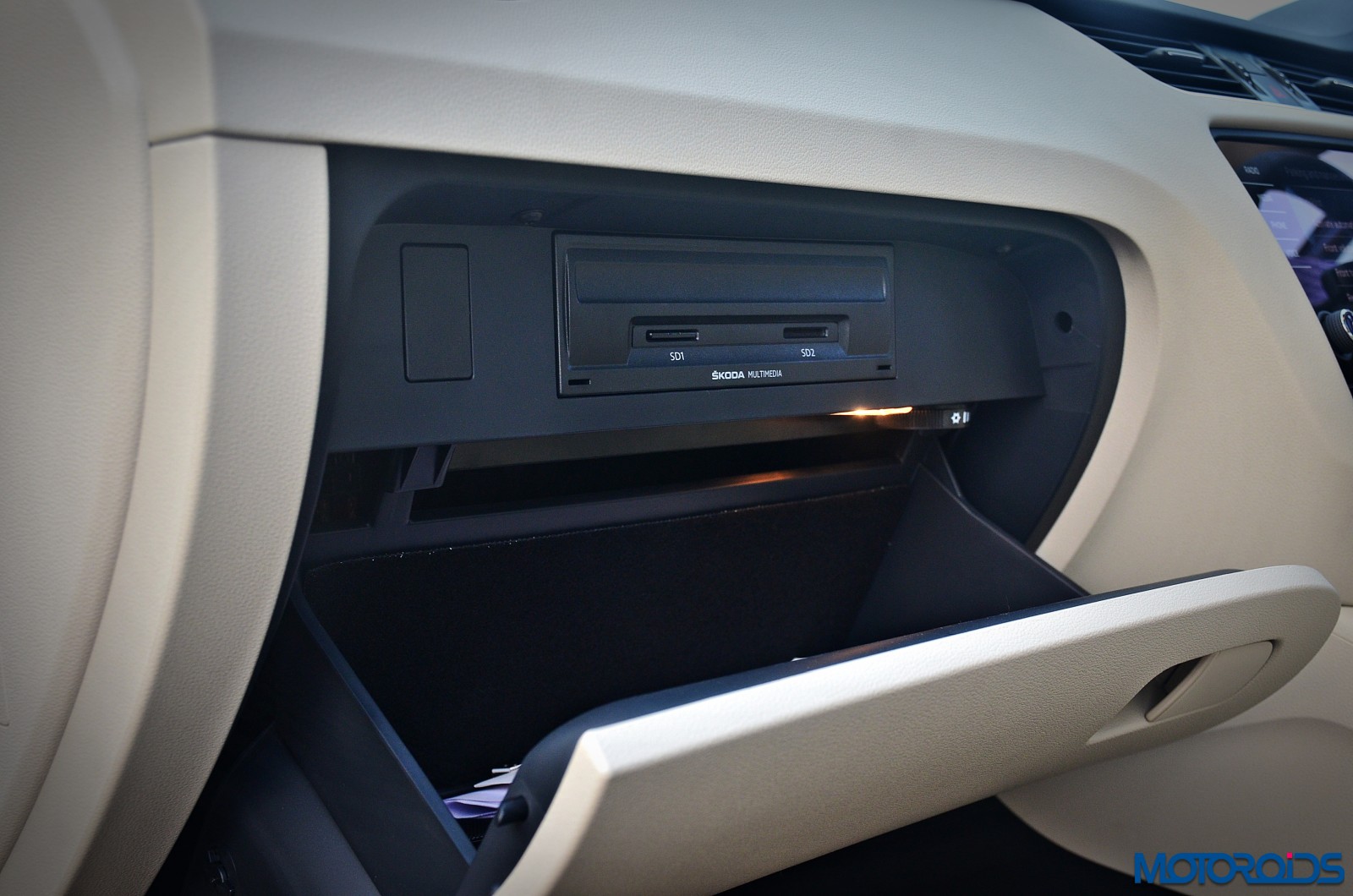 Glovebox is lit and will keep your drinks and chocolates cool 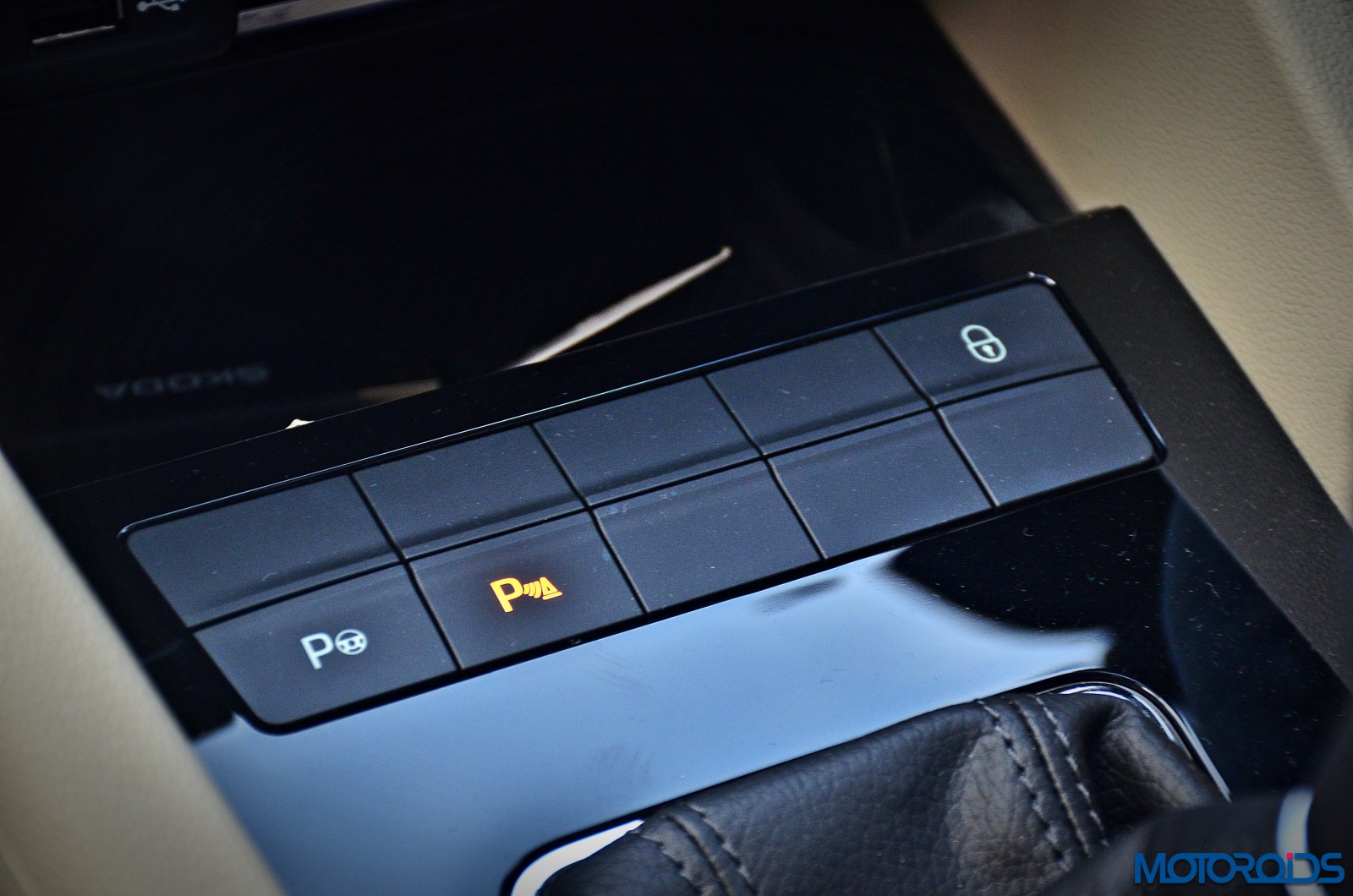 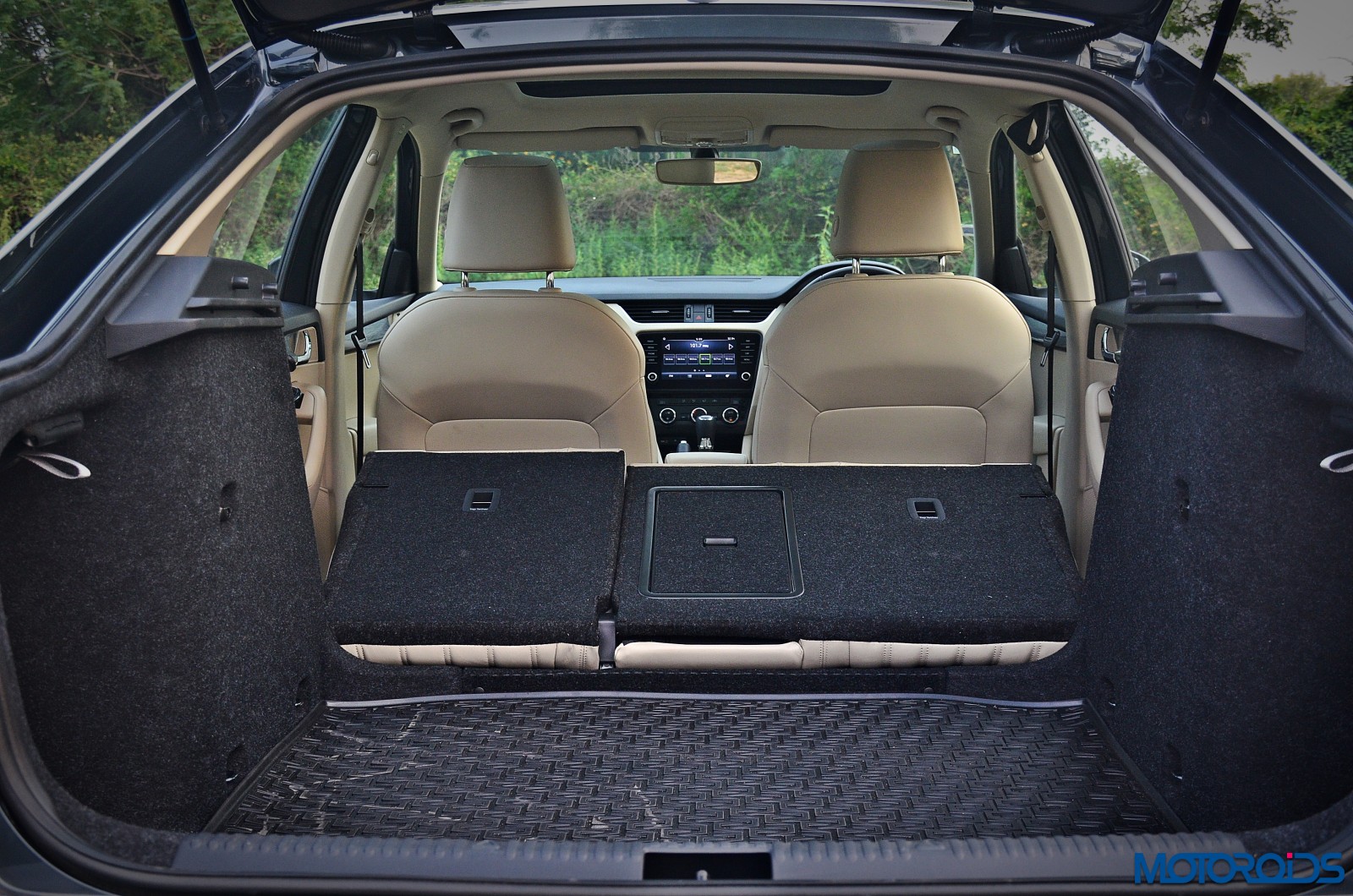 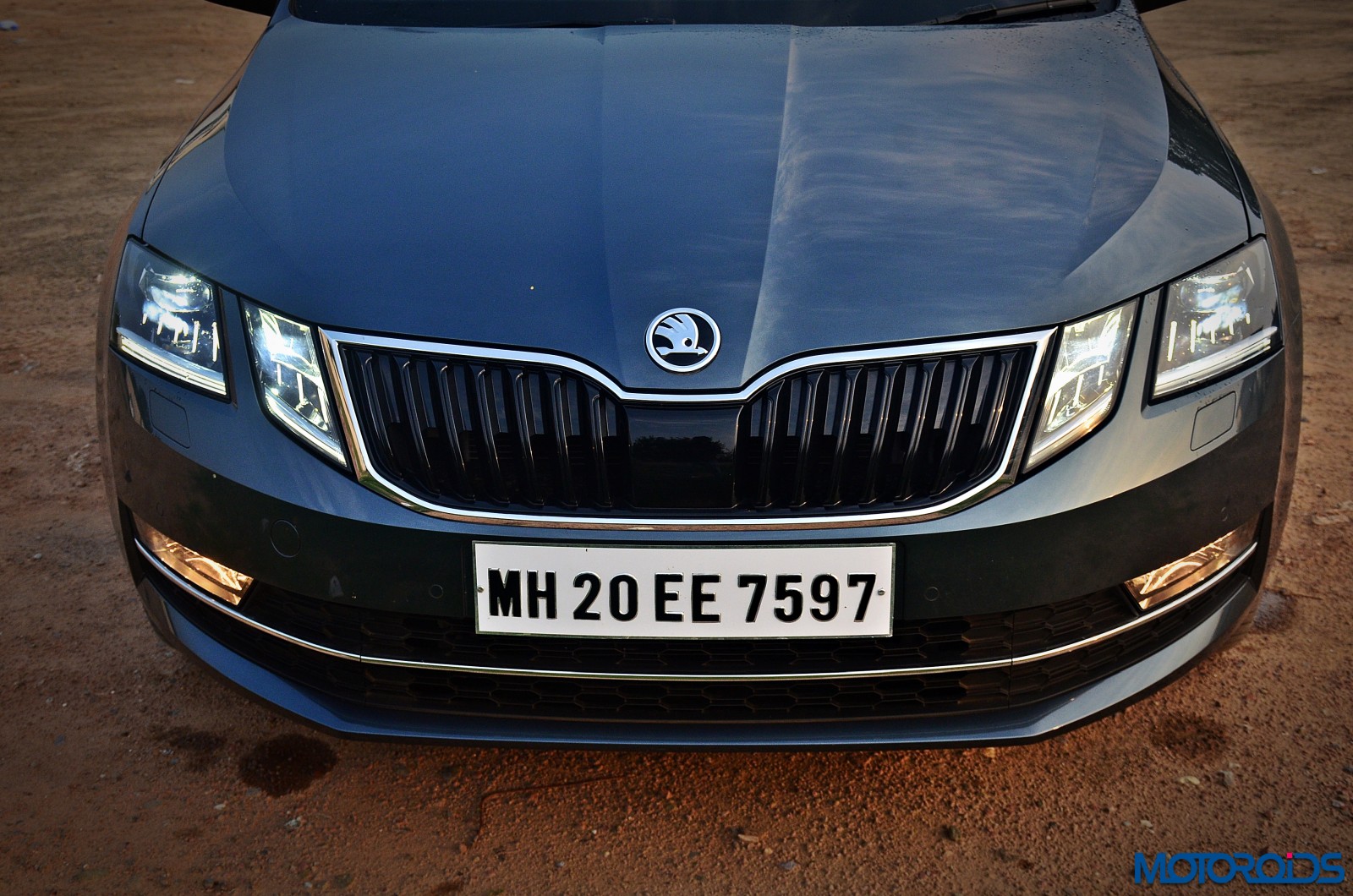 An adaptive headlight system changes the geometry of the throw automatically, according to load, steering angle, rain and speed 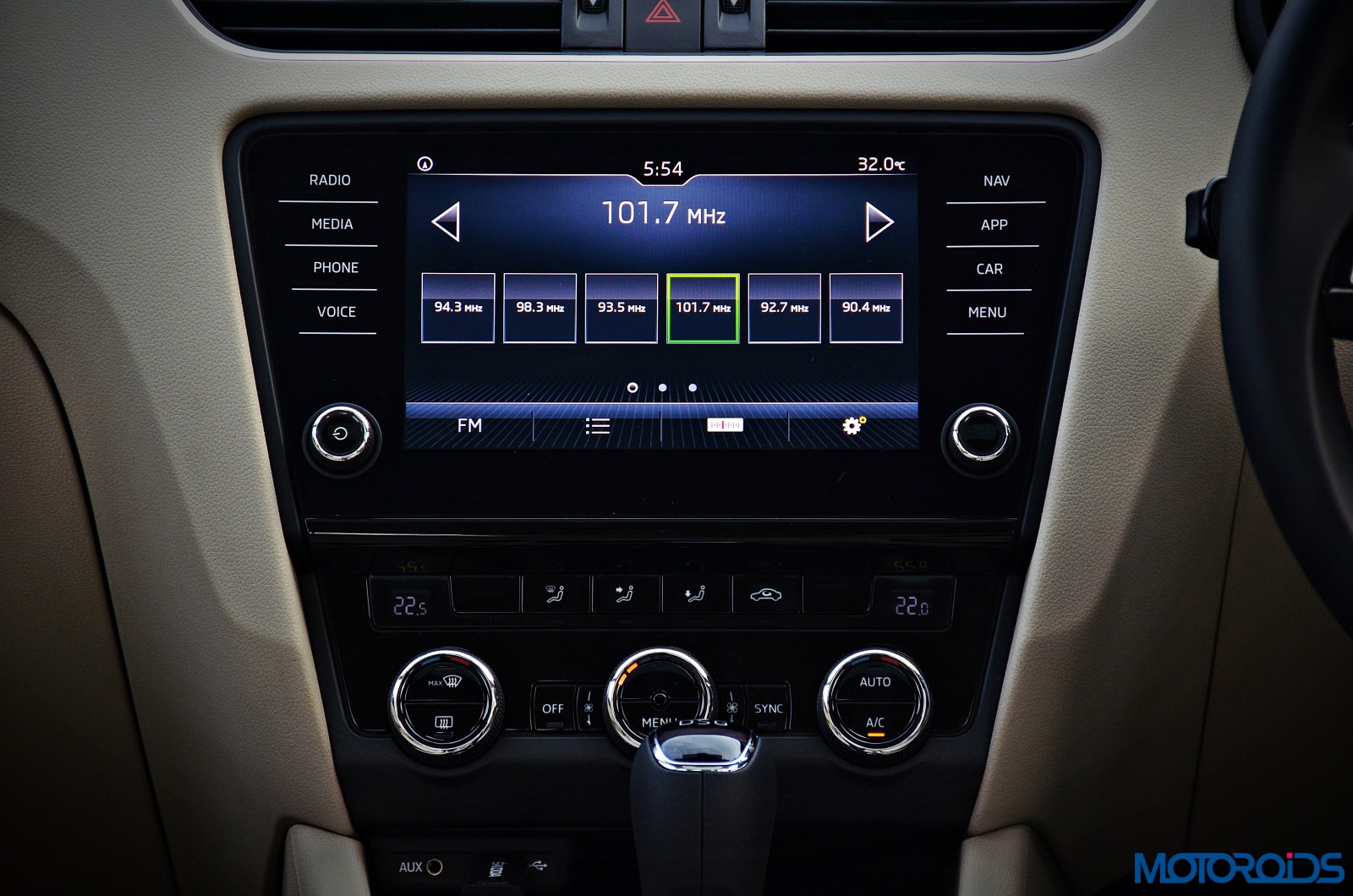 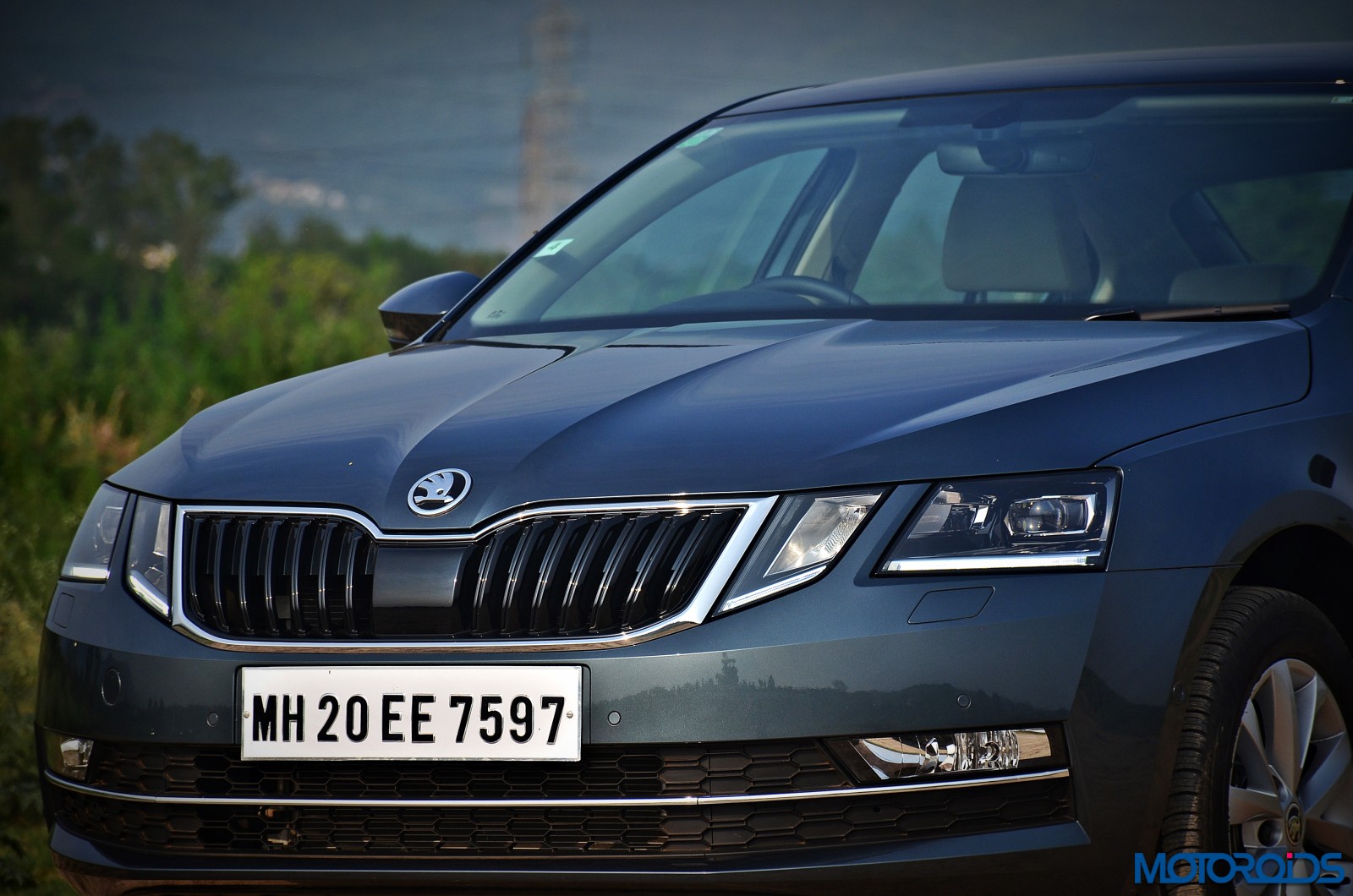 The facelifted Skoda Octavia continues with its notchback identity which still makes it stand out in a crowd of new age cuts, slashes and identical faces. And that last part is exactly where the new car looks very different than the earlier example. It now features a split headlight which has resulted in mixed opinions about the way it looks. But let me tell you something, it looks distinctly mean to me, and personally, I like it. Has managed to break away from the boring family look scheme of things and the visual monotony associated with most products these days. 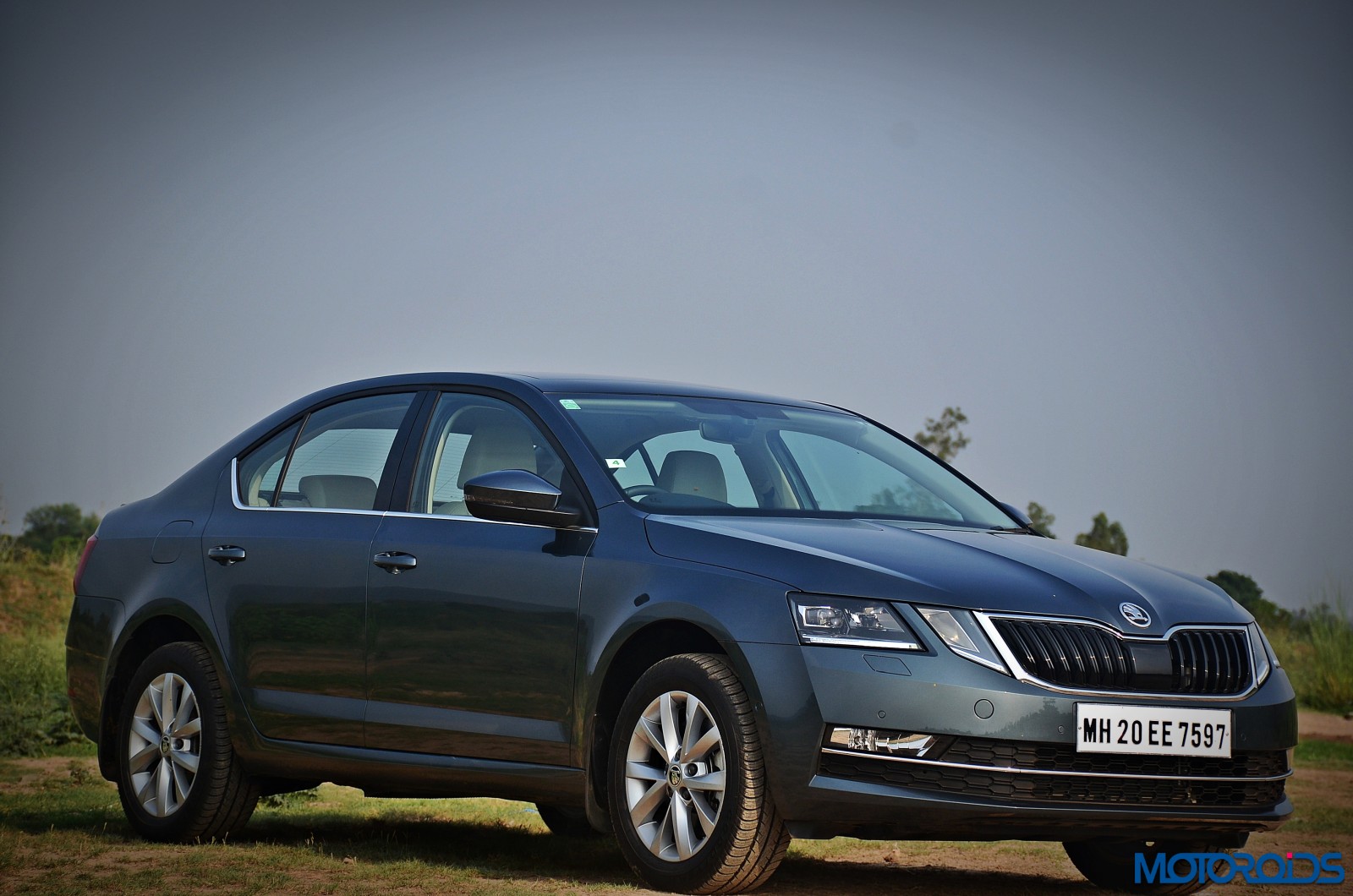 The radiator grille now gets more prominent slats, highlighted by glossy black inputs, while the F1 car nose embedded within the hood has been made to appear bolder 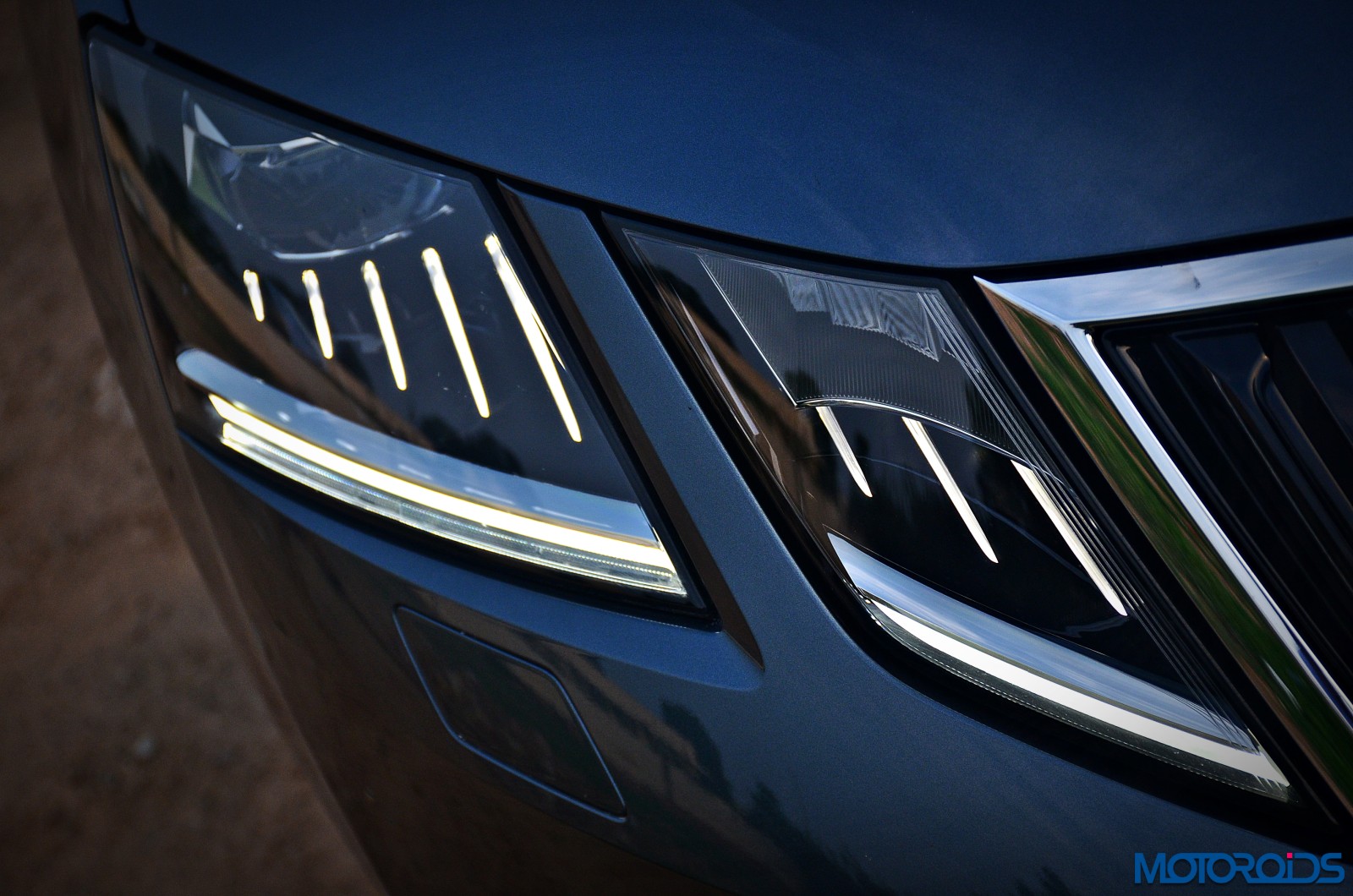 Headlights are full LEDs, with separate housing for the low and high beam. We like the clawed detailing inside the housing, and that is illuminated too! 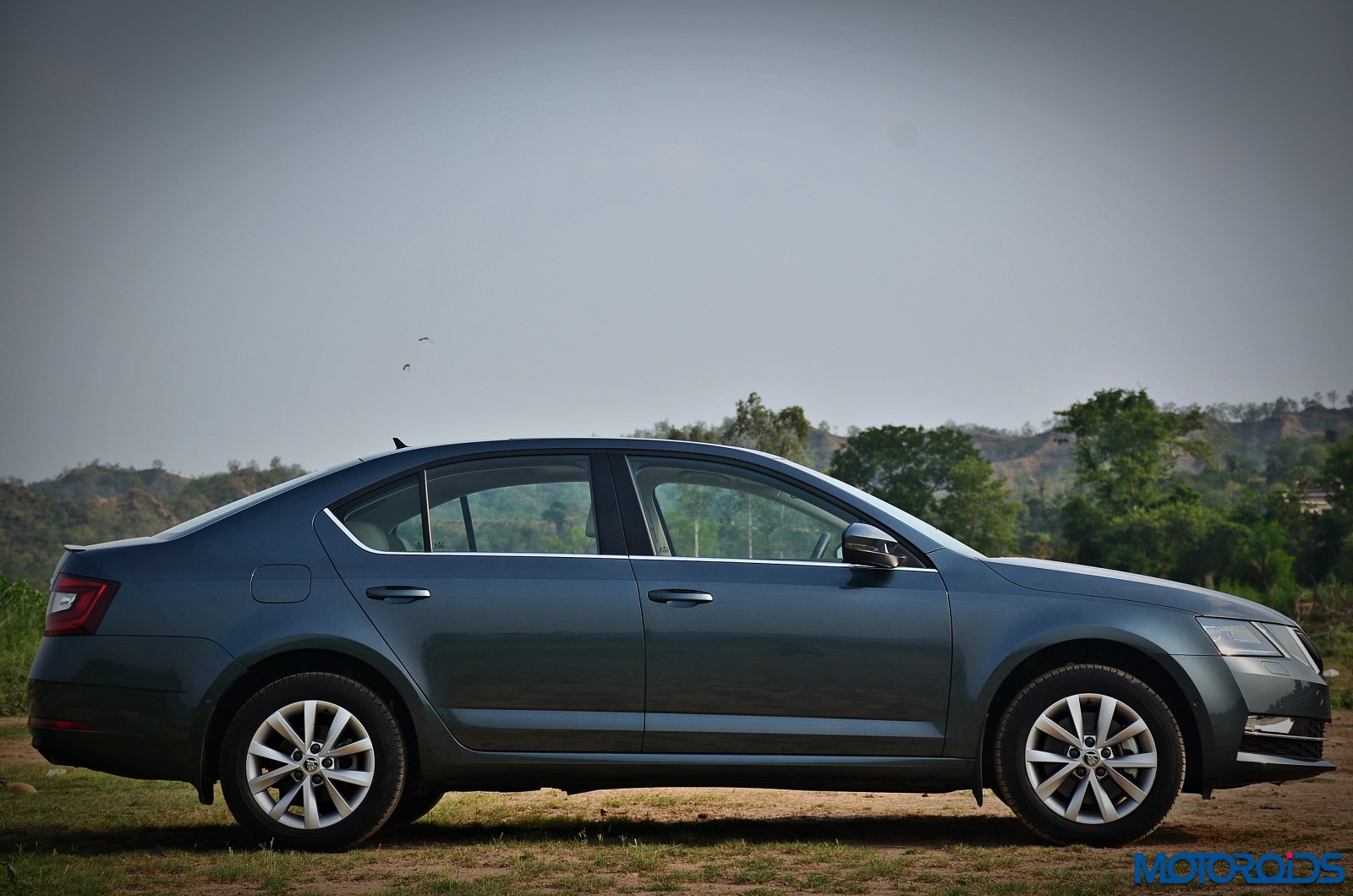 Sideways, the new Octavia is almost similar to its predecessor, with the exception of an Alcatraz pattern for the 16″ alloy wheels 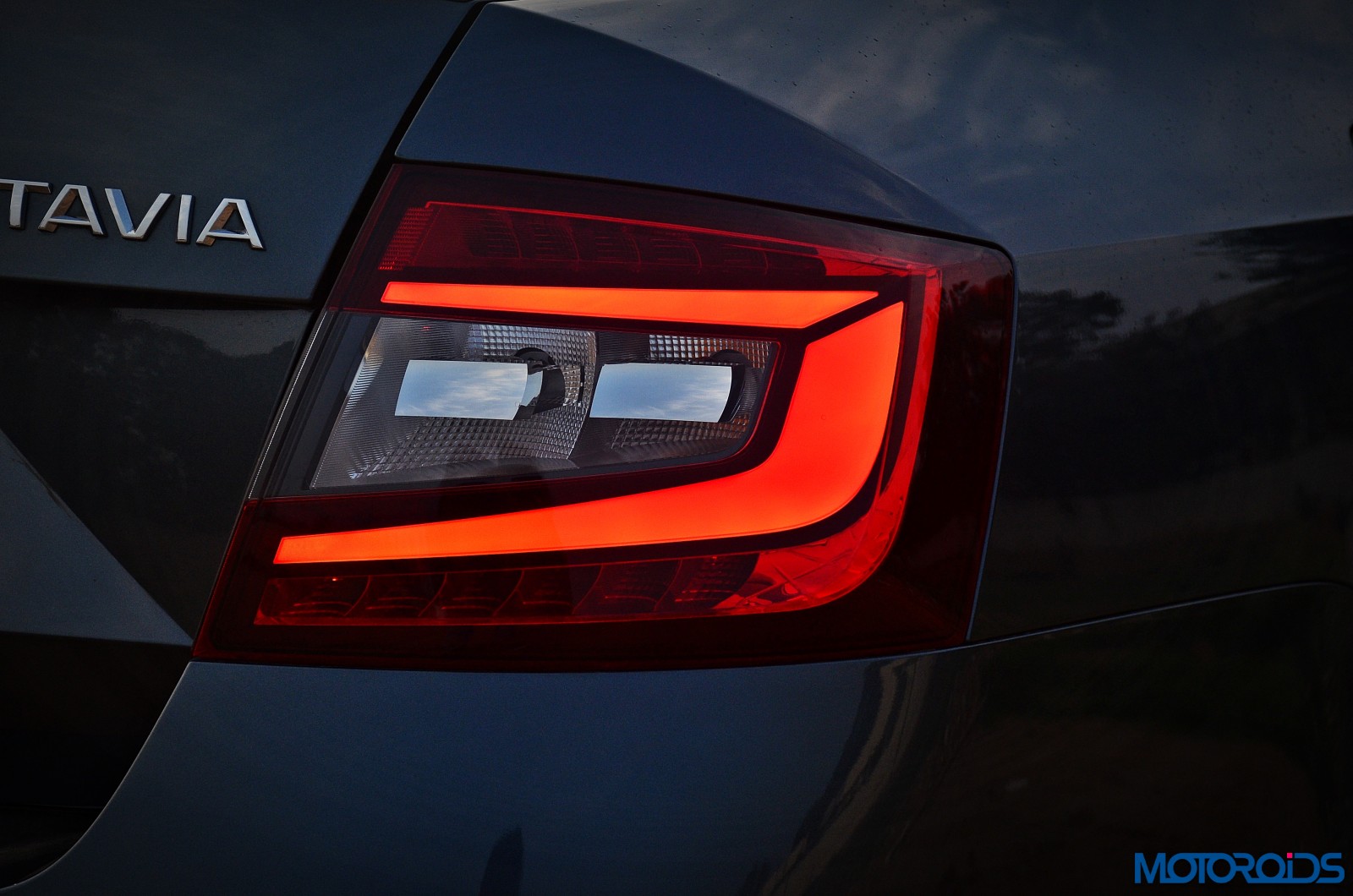 At the rear, the 2017 Skoda Octavia gets all-LED illumination for the taillights too

In a segment which is slowly shrinking because of changing tastes and a heavy appetite for SUVs, the 2017 Octavia stays true to Skoda’s positioning as a brand which offers a lot of premium, for a lot less. It is packed with features, is well built, feels rich, drives really well, and unless you need a premium entry level sedan just for that German monogram which will sit pretty in your garage, this one’s a no-brainer if you ask us. 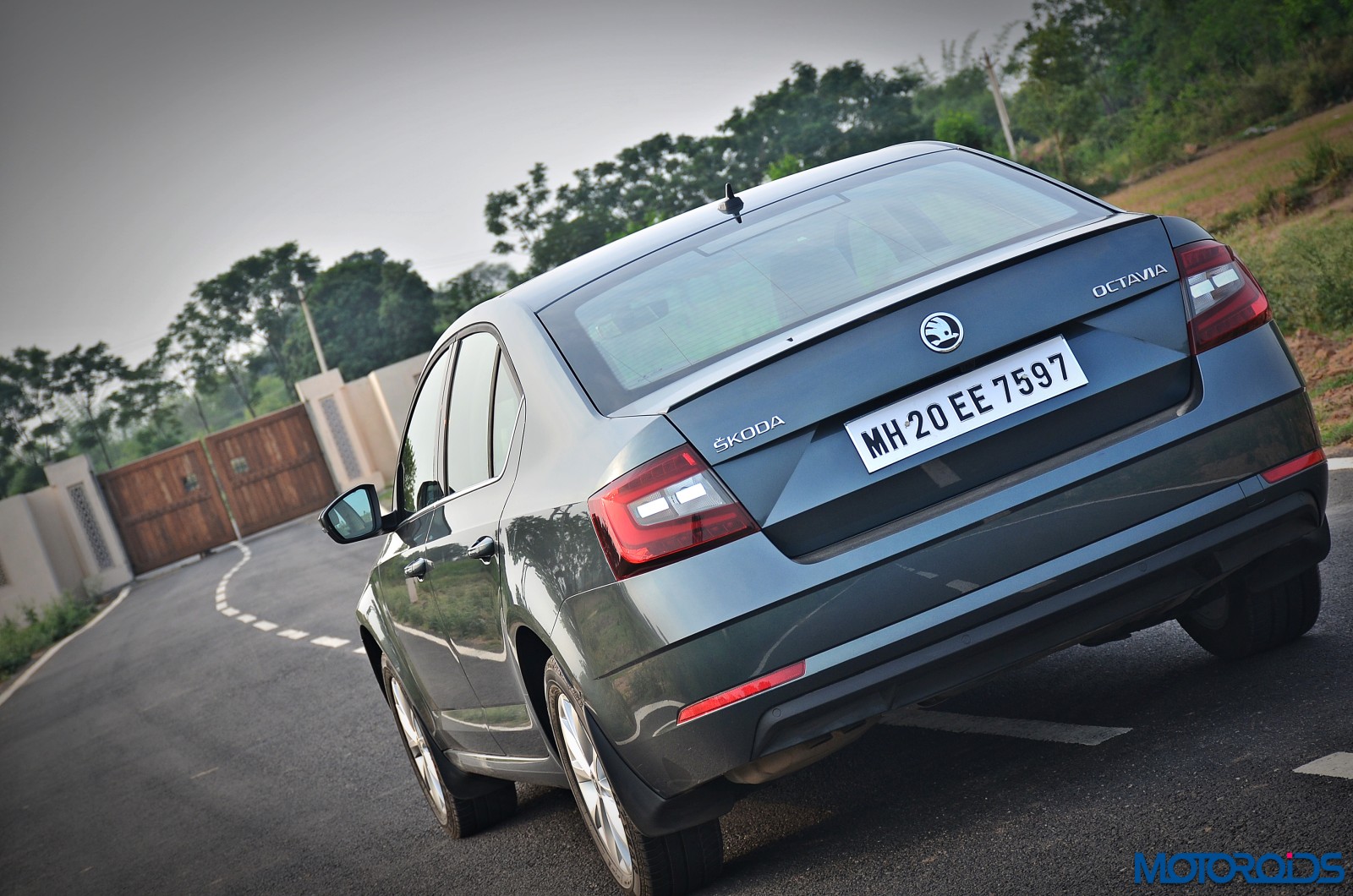 Skoda has plans to launch the 7-seater Kodiaq in India this year, along with the Octavia VRs and an all-new product which they’re tight lipped about. Maybe the Karoq? Could it be the new Fabia? Well, we could only guess as we admired the quietly brilliant Yeti which was deployed as our support car.