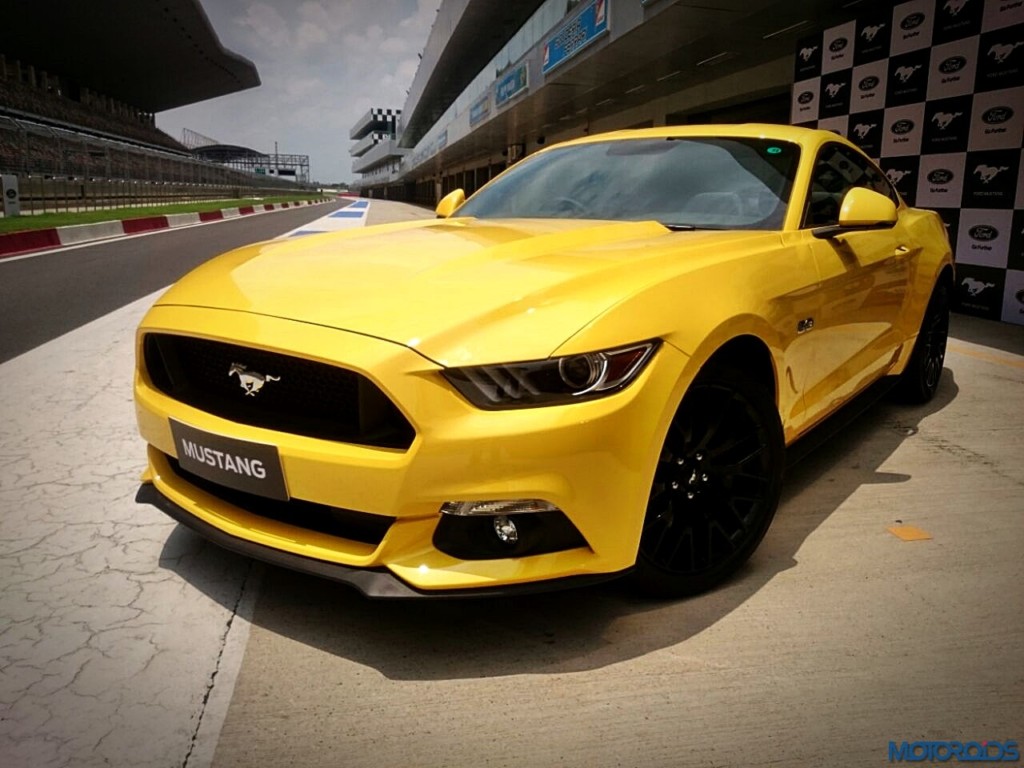 Delhi has been one city very close to my heart. I used to call it home for sometime, was robbed at knife point during my year long stay and many a times, escaped the clutches of badland culture by a whisker. I was back here after a long time, Nina Simone plugged in my ears, asking me, “Oh Sinnerman, where you gonna run to?” Affirming the devilish intent in her voice was a signboard outside a compound which read, “No trespassing, Violators will be Shot!” It seemed this city to me is where I’d find, if not all, at least some sums to my sins. 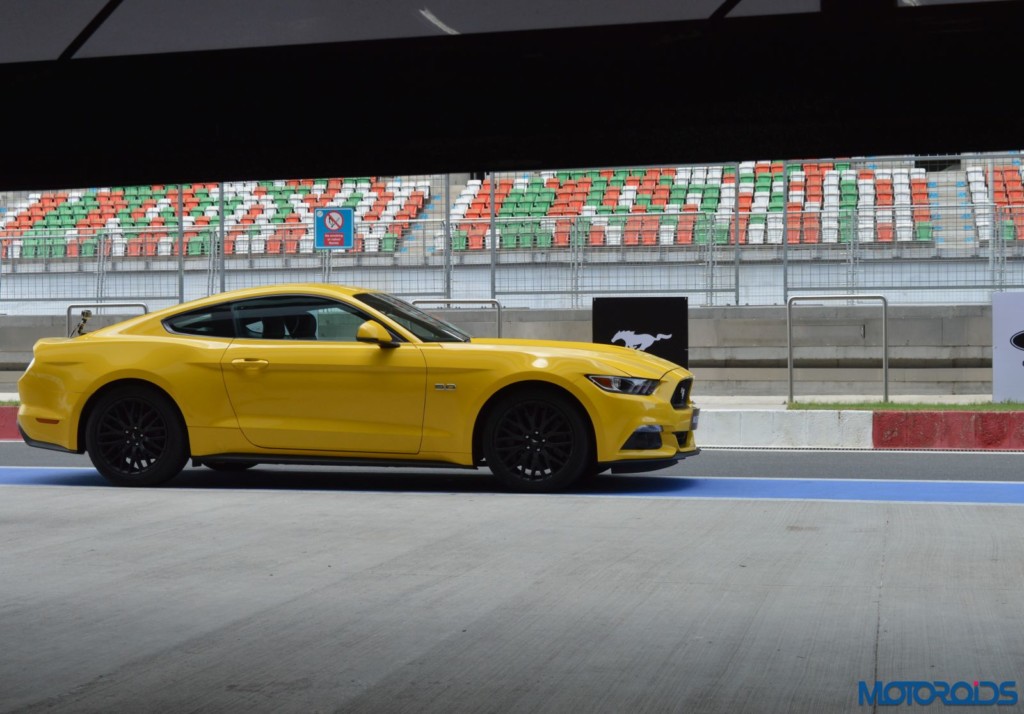 Lust they say is sinful. I’ve sinned all my life and have been filling that lake of transgression, salivating after metal and rubber, every passing day. That reservoir in my mind was overflowing. So somebody at the Buddh International Ciruit had opened the pit garage shutter only halfway, and as I swayed my neck, a torrent of guilt gushed out to the other side and took the form of something that looked like what I’d only seen in movies and heard songs about. It was a very Yellow Ford Mustang! 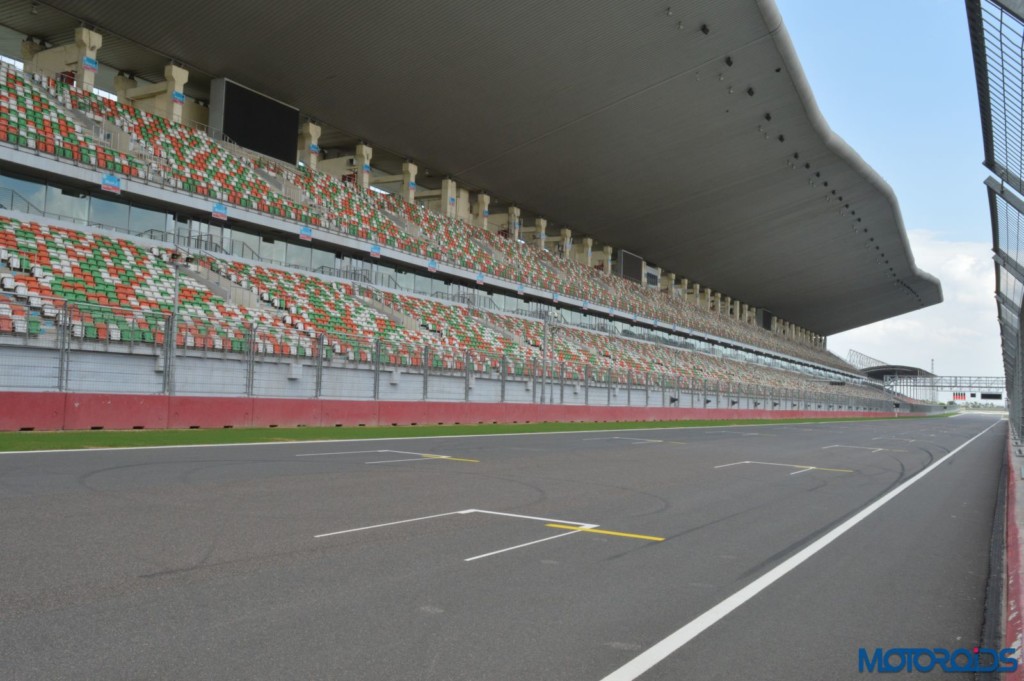 After a little briefing by famed rallyist Hari Singh, waiting for my turn, I walked across the pit lane to soak in the eerie silence of folded seats of the seriously grand grandstand. I peeked out of the safety barrier to see a spick and span stretch of tarmac with no traces of rubber or any other remnants of a fast past. A few pigeons fluttered away from their nests in the stands, as an approaching sound kept growing louder. Moments later, a red car appeared out of the final corner, got a little out of shape at exit, and as the driver mashed it to straighten things up, it roared down the main straight. 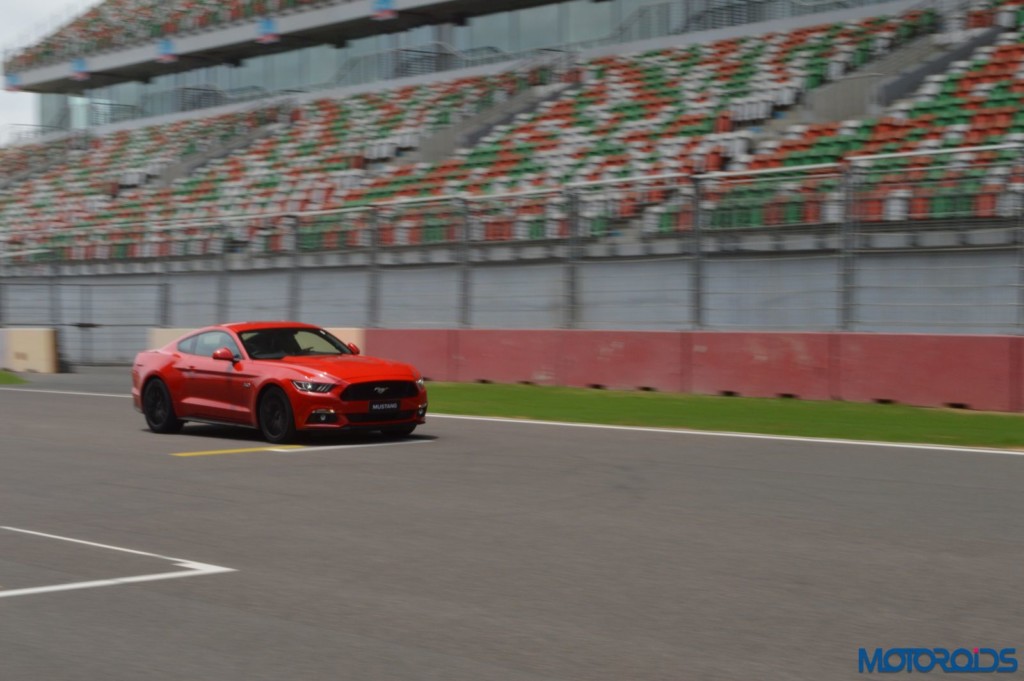 I was expecting the sound to be more gnarly, more vicious, a louder rumble, something which would make the ghosts of a dead grandstand’s audience to come alive and cheer. But that wasn’t the case. The Mustang did leave an admirable roar behind though, something which can be amplified with an after market exhaust or an optional Ford Performance part which they plan to sell as an option among many others. Blame it on modern day laws which muffle everything that sounds great. 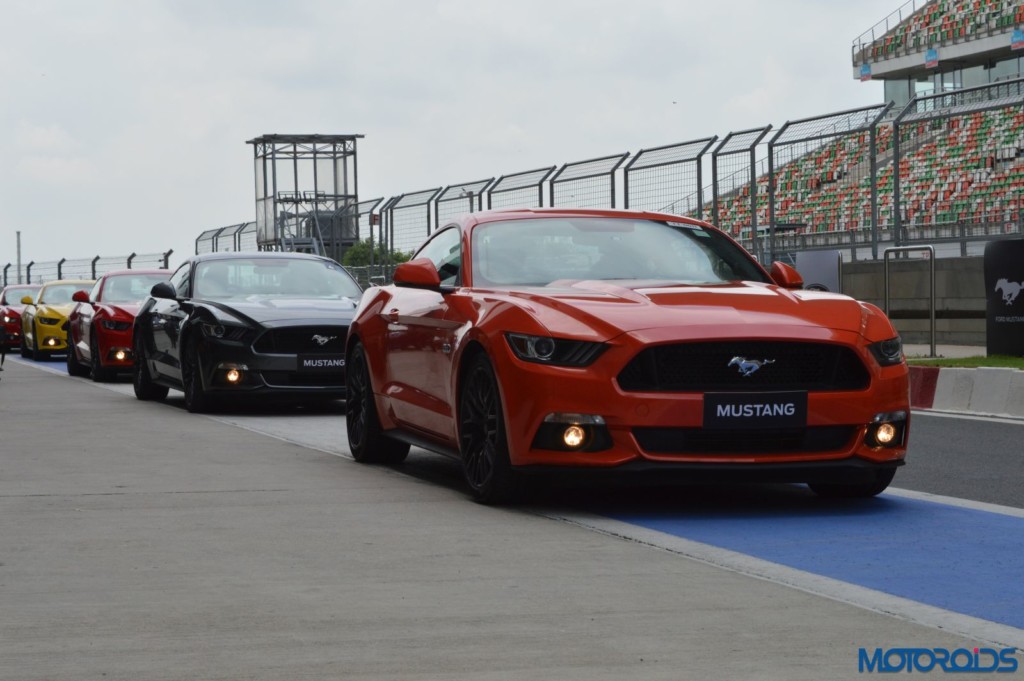 Moments later, pit lane sirens started to blare, also signalling that it was now my turn to drive. I was told it’ll be a brief experience of 3 laps – the outlap to be enjoyed at a ginger pace as I listened to the instructor on the radio, a hot lap and an in lap. And during all these times, i’d be nannied by another instructor in the passenger seat. As i adjusted the seat, took a few glances at the things inside, a man knocked at the window and tied a heart rate monitor around my wrist and then a girl wanted to click my picture, all of which must’ve made me conscious and my heart rate to go up while I was still at standstill. I could see a familiar looking infotainment system bang in the middle, below which shined old school switches borrowed from a North American P-51 to control many things. 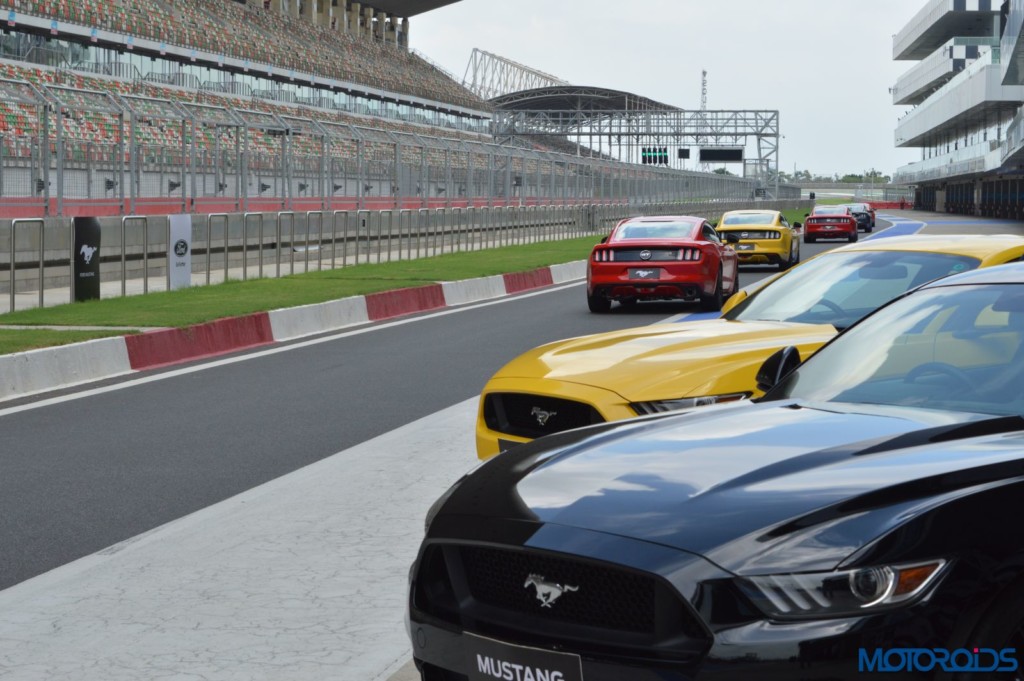 Seating position set, backrest adjusted manually, another smile for the photographer and five cars then gently rumbled their way out of the pit lane. With cones set at every corner, marking braking and ideal entry and exit points, the lead instructor’s guidance chattered through the radio. 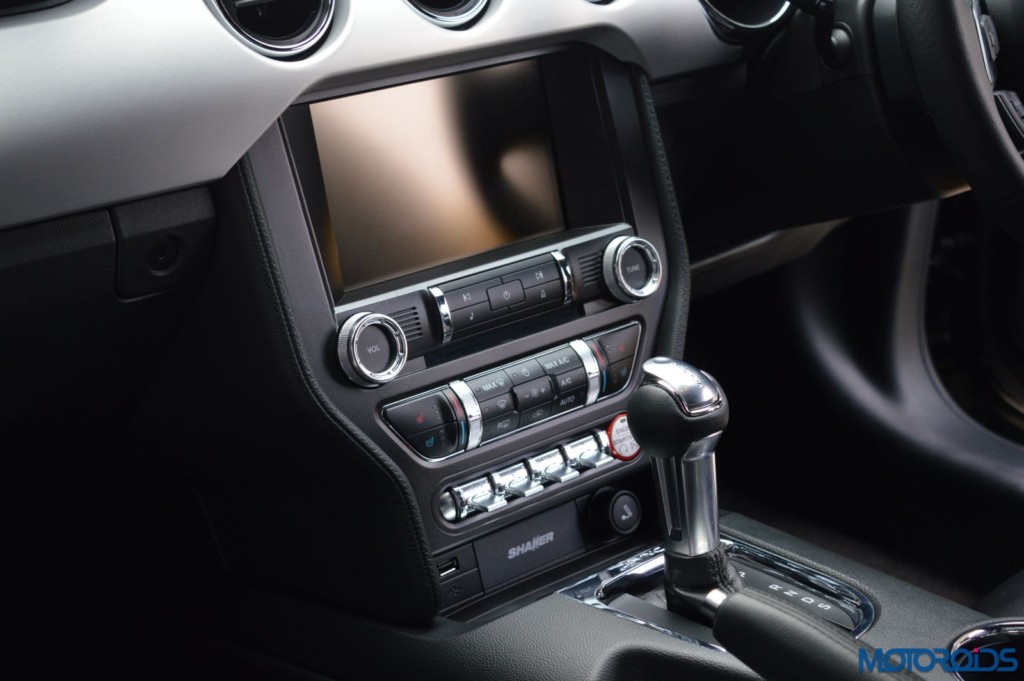 First lap done with, I waited at the last left hander before the main straight for the car ahead to gain distance. As soon as it had disappeared, I had my Stang’s lever set in ‘S’ mode, my gentlemanly nanny had toggled the switch to ‘Track’ mode and I had heard about the ‘Line Lock’ feature, but to me it remained a fable as rubber had to be saved for many others who were to drive after me. So I buried the pedal as deep inside as I could. There wasn’t any smoky sideways action though, because as much as I would’ve liked my itchy finger to turn it off, traction control had to stay ‘On’. 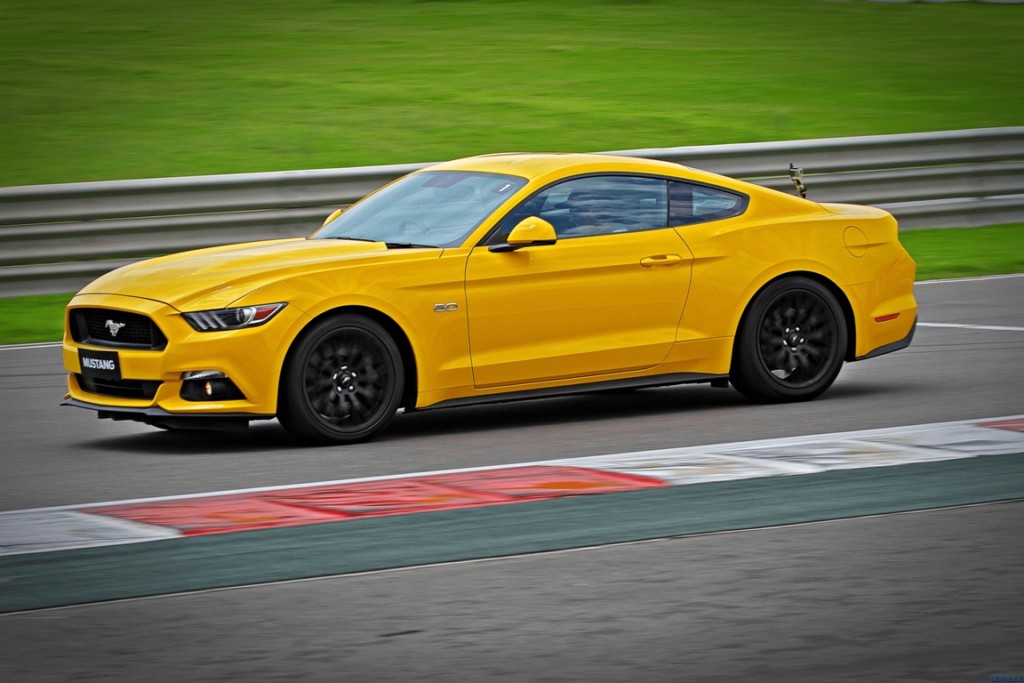 The Mustang’s 5.0-liter V8 then released all of its 401 Yankee horses, making my spine subtly sink towards my bottom and the power bulge on the long bonnet to rise a couple inches. The rev counter registered 6 and a half thousand clicks, and I realized I had made a mistake. You see in ‘S’ mode, if you use the paddles behind the wheel and somehow forget to shift consequentially, thinking the electronic brain would do the needful, it doesn’t just happen. The big V8 holds its revs even at redline! Laali, my very jolly instructor cuts in with that piece of info, I shift manually and see myself hurtling the equine Ford towards the first right hander. Must’ve hit a ground speed (That’s what it says on the speedometer) of about 180 kph, when I stood on the brakes and realized I stood too early. By then, the gearbox had climbed into its lower echelons pretty smoothly, matching revs with every downward click. 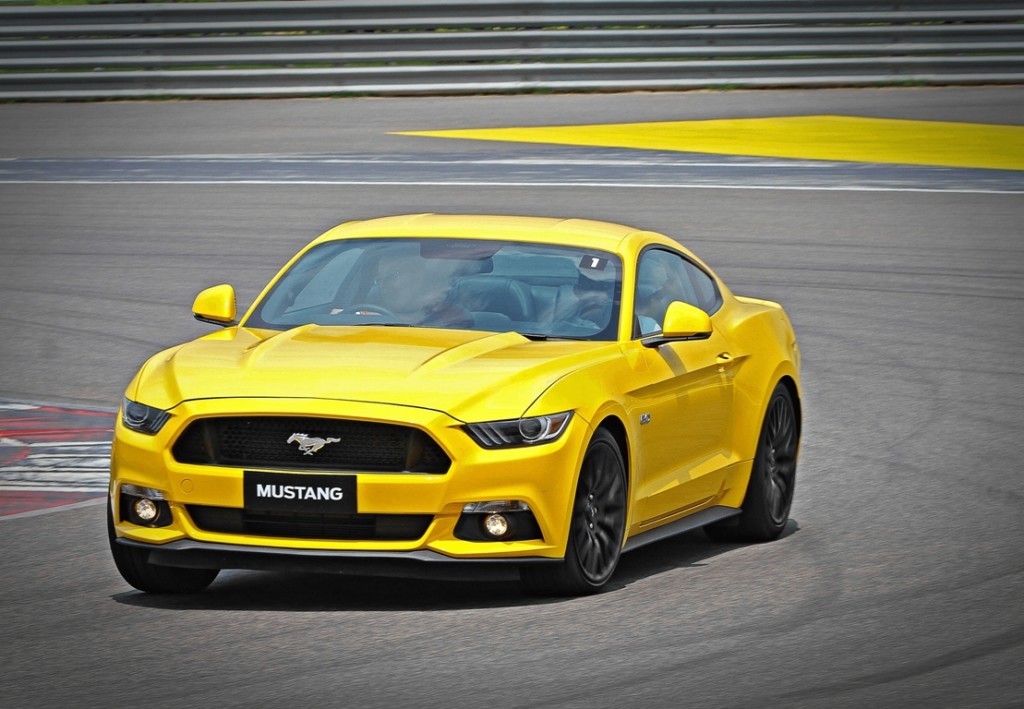 Haphazardly trying to have as much fun as I could out of a single lap, I was gunning it again too early, managing to get the tail out only slightly, correcting it back in place. Into the flowing left curve, climbing up to a blind right corner, the Mustang sat squat, until I entered the long back straight in a rather civil fashion. Mashing the pedal again into the horizon, things inside felt poised and unhurried, so much so, my instructor and me were having a relaxed conversation. 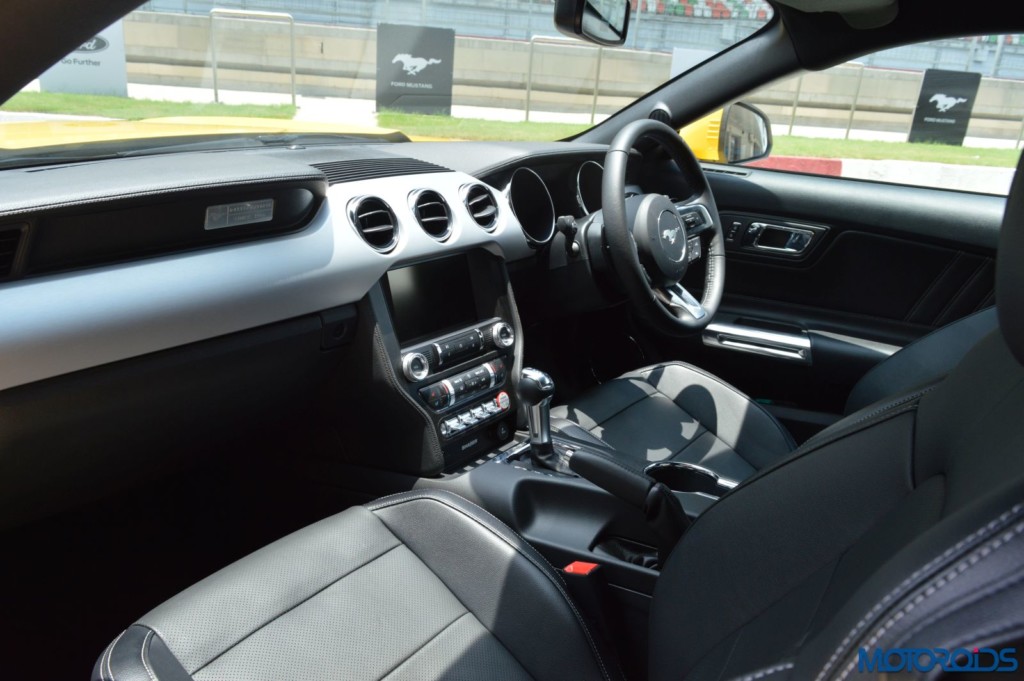 During all that, the six speed gearbox went about its business and matching the car’s character, felt like it likes a dose of cheese in its double hamburgers. It isn’t what you’d call slow, but there is a slight delay for power to kick in, once the shifting is done with. At the end of the straight, I remember registering a ground speed of 220 kph, asking Laali to tell me when to hit the brakes as it must’ve been his umpteenth outing here. Pushing the brake pedal towards the bodywork, the Mustang shed its velocity in a poised manner, while a lot of confidence was being conveyed at the pedal. 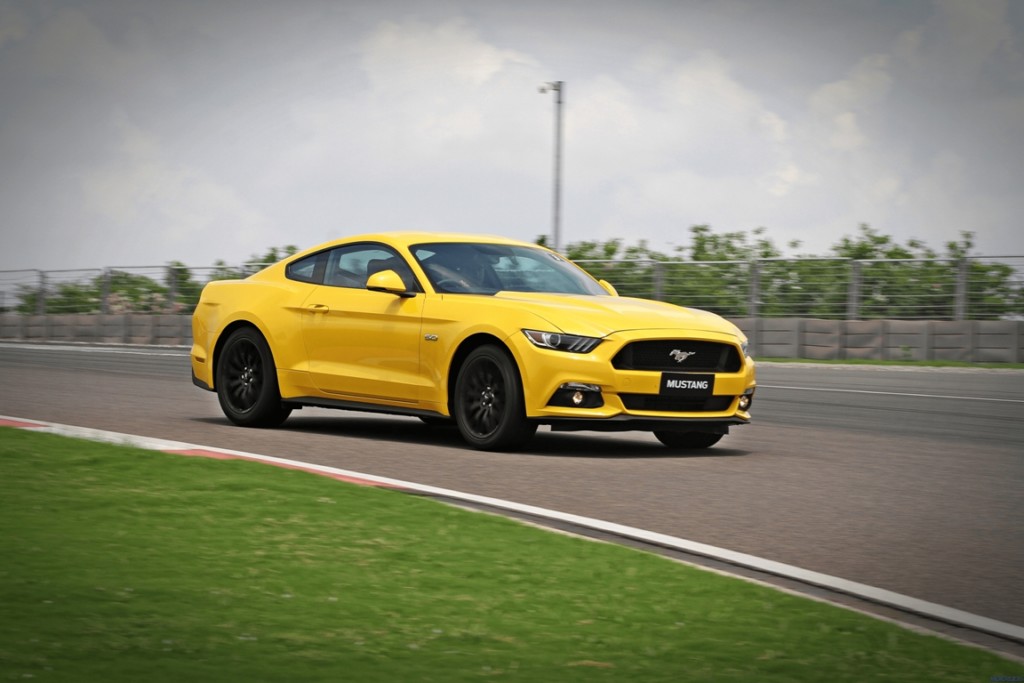 Braking too late this time for the 90 degree downhill righthander, I was missing the cone at the apex by a huge margin. Experiencing a slight amount of roll and some understandible hesistance from the heavy front to turn in quickly, I was accelerating downhill, savouring some V8 rumble, when i saw two cones and braked again. Two sequential left handers and a quick right handed straightline exit later, I looked at the traction control switch again, then looked at the instructor, and although he looked friendly, I somehow managed to hang up on the idea to switch that thing off. The steering felt well weighted in this section and offered a decent amount of feedback as I clipped apexes and was aggressivley hitting the chicane. The Mustang’s muscle car chracteristics came to the fore this time though, as quick directional changes isn’t what this American is all about. It isn’t for nothing they’ve slapped a big GT badge on the boot. Had the traction control been switched off though, it would’ve been a smoky sideways riot through that section and also at the long parabolica which followed later. 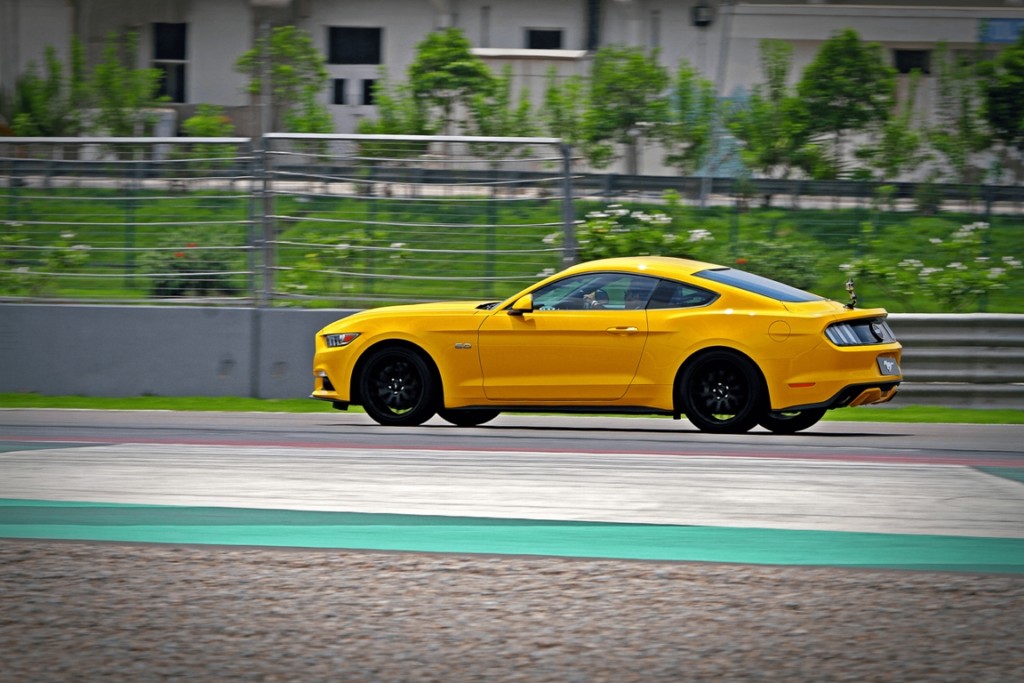 Unfortunately, just before the really longe curve, I caught up with the car ahead of me, and following event rules meant it could not be overtaken. I could hear my inner self cursing the driver ahead for being a turtle on a race track for no reason. My instructor somehow sensed it and asked me to stop just before the entry to the main straight, so that the car ahead could pass. We did just that, launched the car from another standing start, only to catch up with the car again at the uphill right hander before the back straight. I had to give up thinking I was driving the Mustang on a track, and started to appreciate the feeling of cruising around in one, imagining I had bought one. 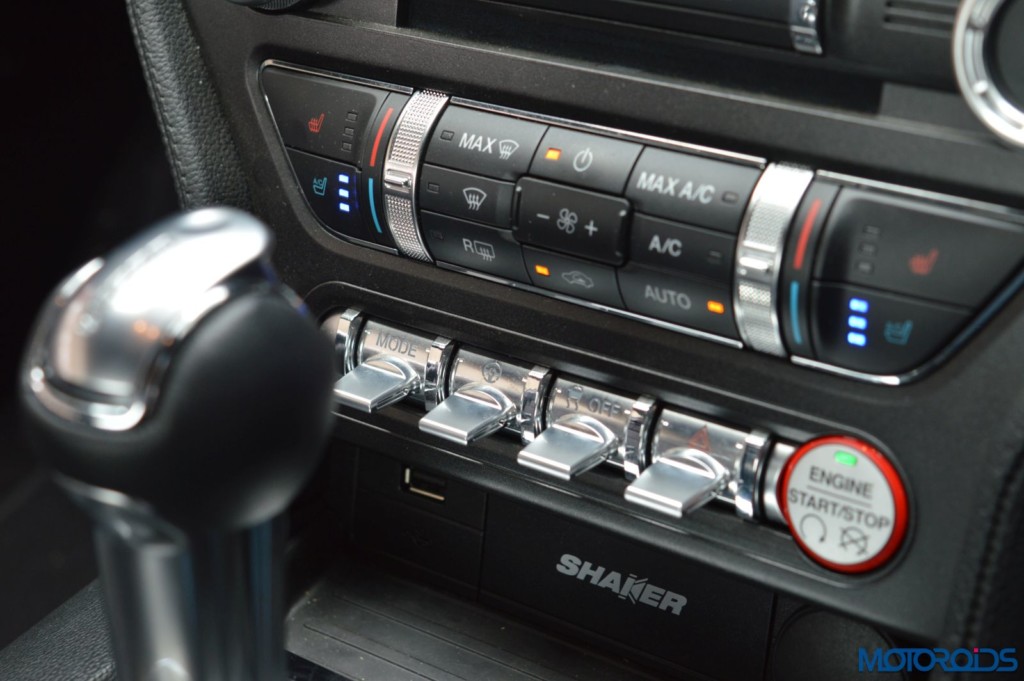 That imagination if it had to be real, would’ve meant ejecting my instructor’s seat, rolling the windows down, putting my right elbow on the sill and escape the track to enjoy the V8 burble on the open road and into the horizon. These are the sort of dreams muscle cars want you to dream and inside the Ford Mustang, i could see them clear and hear them loud. 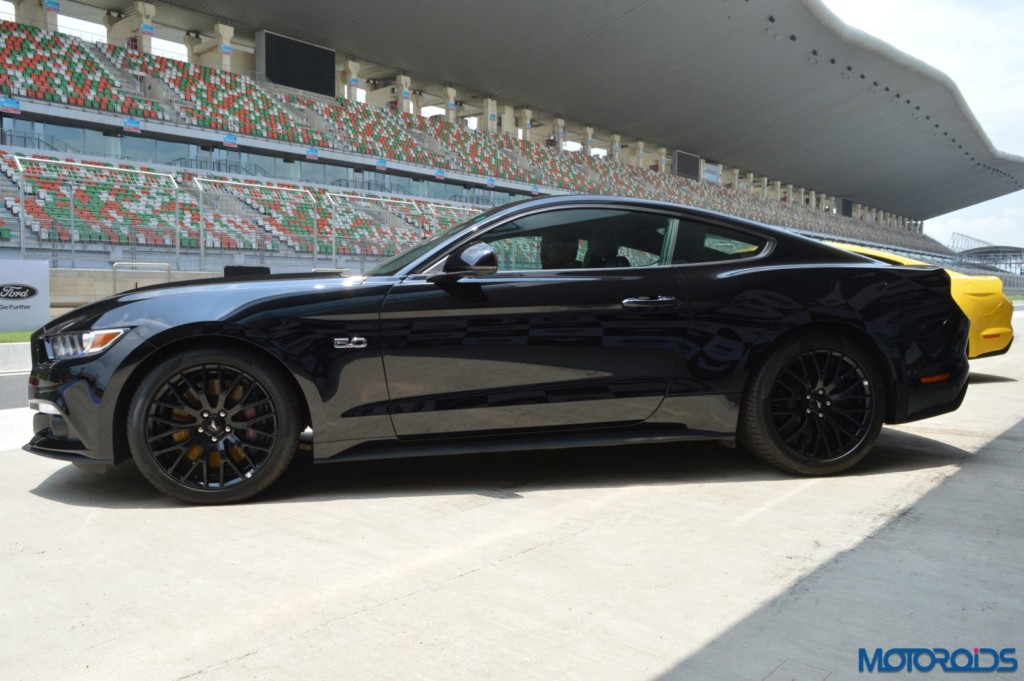 I rolled up into the pit lane after a very brief acquaintance with the car and straightaway walked towards a jet black example that had been parked in the distance. Those headlights glinted at me like an aggressive Great White and even had gills to show off, neatly embedded in the front headlights and mimicked by the rear illumination units. The galloping horse was overshadowed by a wide grille that had me swallowed in the more I looked at it and those muscular bulges on the long bonnet confirmed that for me, this is arguably the best looking Mustang in history. I’m not a sucker for vintage anyways. 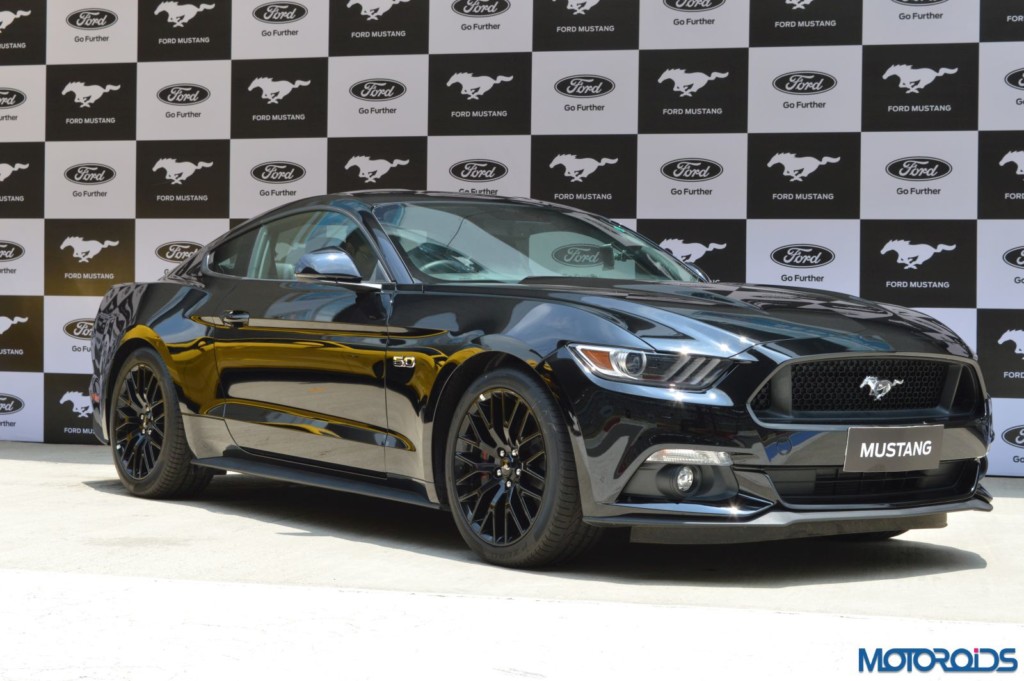 I found myself shamelessly admiring that low shoulder line, those frameless doors and that fighter jet canopy with a roofline that merged aphrodisiacally with the boot. Getting over my salivating self, I then figured there’s space for four, and I could be at the back, even with the front passenger seat adjusted for my 6 foot frame. 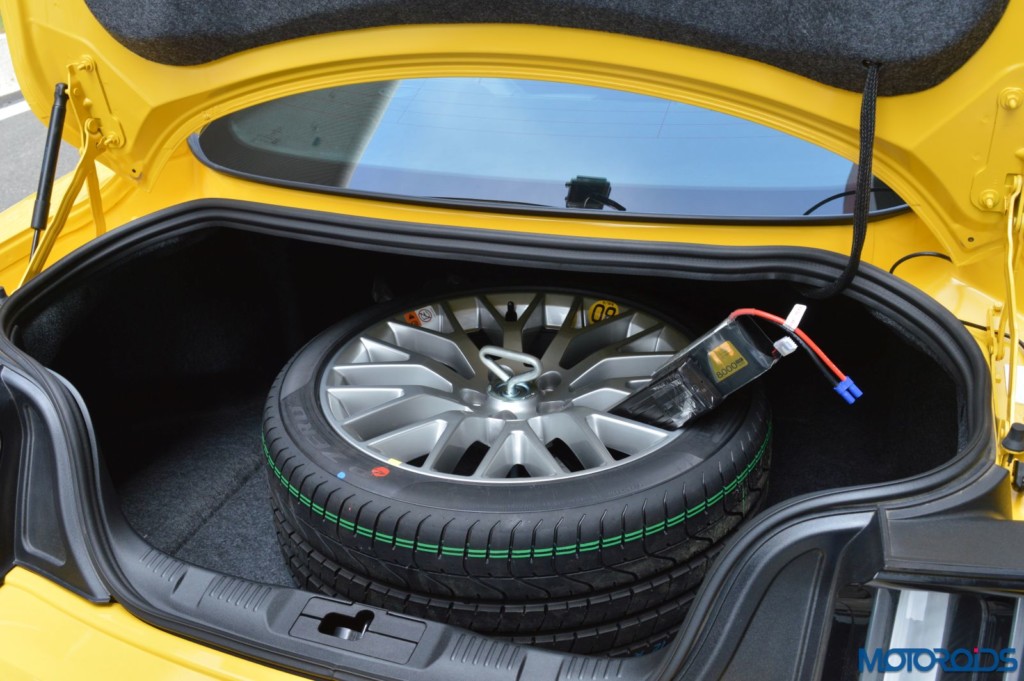 Then there’s a practical boot which can carry a sparewheel and still has space for weekend luggage. Ford will also offer you a maintenance package for a nominal charge and you can get your Mustang serviced in 12 cities across India. Practicality aside, I could imagine being the cynosure of all eyes, if i could somehow take the Mustang out on public roads. It has mighty presence, looks fantastic and is perhaps one of the best looking fast cars out there in a sea of new age cuts and gashes and this and that. 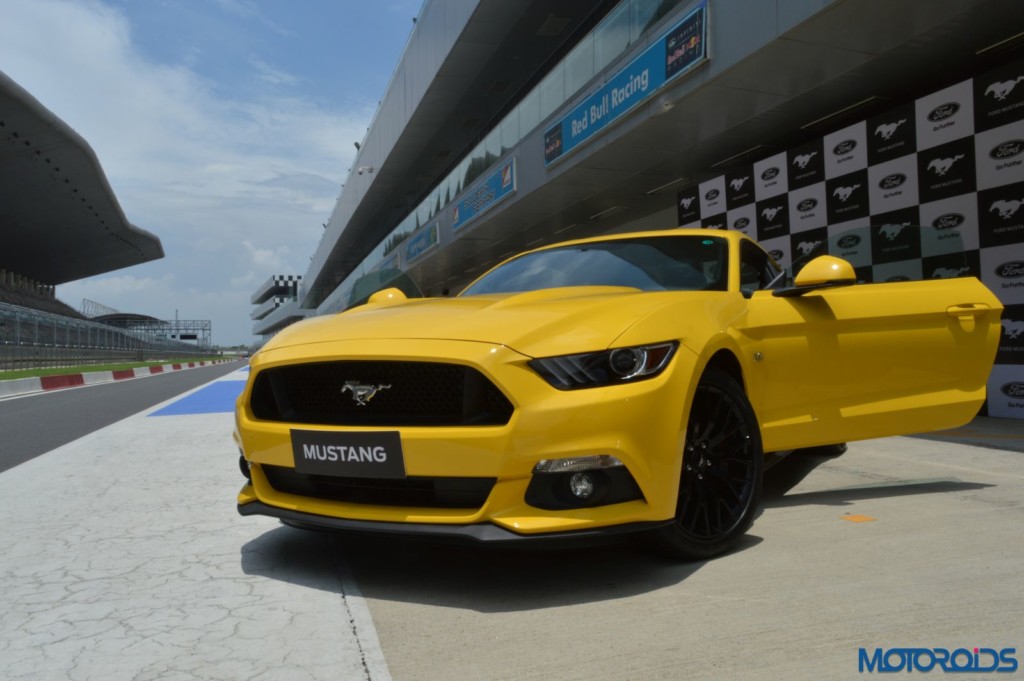 To hit you with some facts. The Ford Mustang is the cheapest V8 powered car you can buy in India. Consider this, the next available V8 powered machine is almost twice the cost of the Mustang and unlike the virginity of a naturally aspirated motor which powers the pony car, you buy turbo charged adulteration for that money. We’re all sinners and if you’ve been wanting to unabashedly put the sum of your sins on display, the asking is a paltry 65 lakhs. My phone beeps and displays a message from my bank, I look up to the sky, unpause the music and Nina Simone continues…
Don’t you see me prayin’?
Don’t you see me down here prayin’?
But the lord said, go to the devil
The lord said, go to the devil
He said, go to the devil
All along dem day