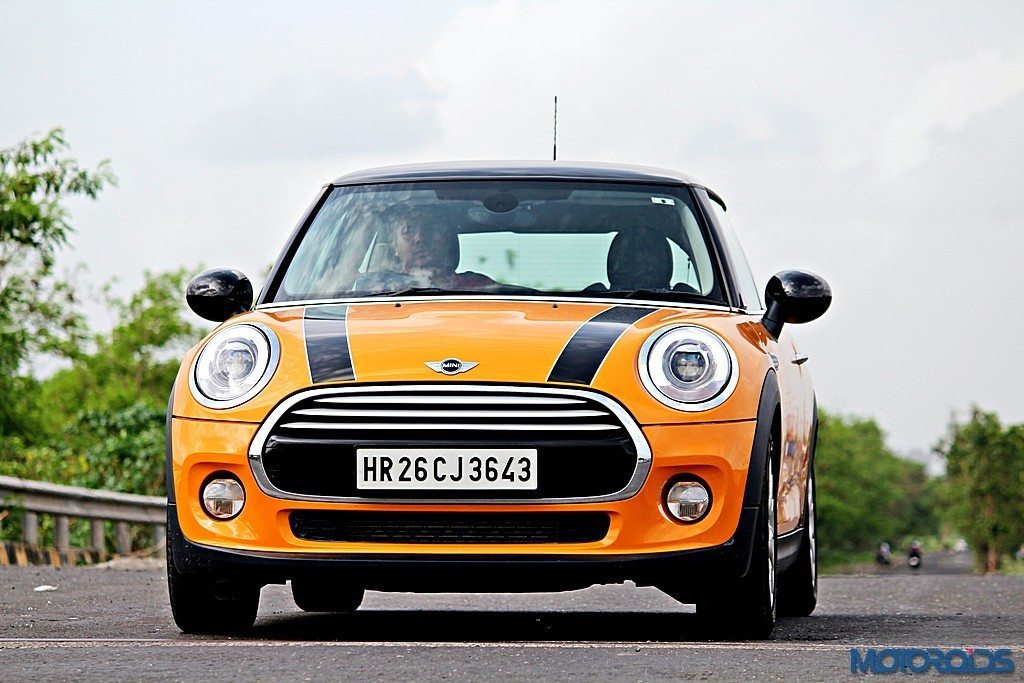 Things are growing. Be it the genetically engineered, giant apples with stickers on sale at your local store, or the carefully cultivated, fat chicken that sacrifices itself for your culinary cravings. In this synthesized, mass produced, industrial clamour, cars haven’t been spared too. Even when it has a name which says MINI. 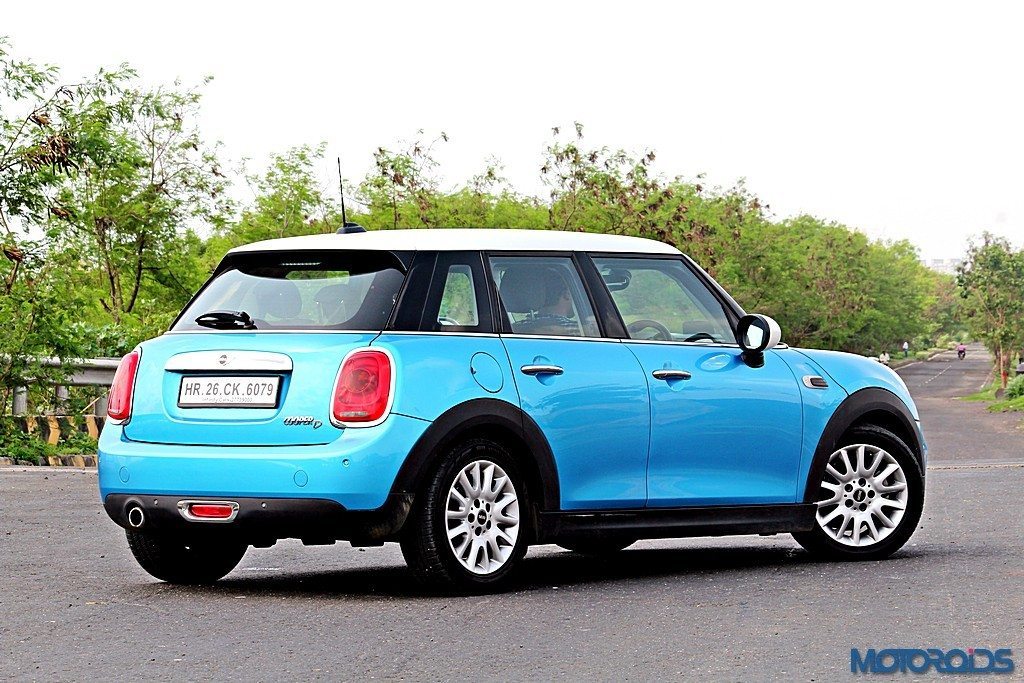 Then there’s the Mini Cooper D 5 door. For the first time in its history, the Cooper has been offered with more than 3 doors. After driving the performance oriented Cooper S, we taste the tamer Mini Cooper diesel twins (3 Door and 5 Door) to see which one is more fit for that trophy wife. 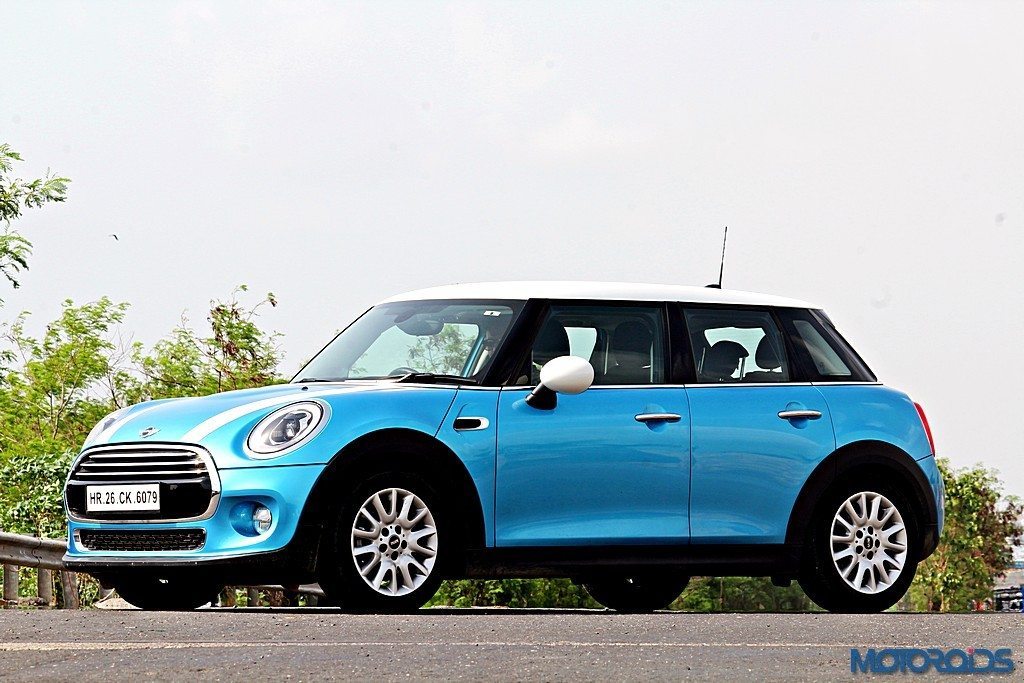 The Mini is an automotive icon. Ever since its inception in 1947, it’s been accentuating itself to fit to modern tastes with every generation. The bug eyed front end, the floating roof, those cute tail lamps – all hark back to the original design with incredible modern day detailing. The 5-door version does look a bit awkward though, its elongated side profile slightly stretching the Mini scheme of things.

We’ve already reviewed the new Mini’s (Cooper S) exteriors and interiors in great detail, so in case you want to take a peek click here. But that was the performance S version – what a hoot it is to drive. The economical diesel sipping versions featured here offer slightly different, friendlier looking bumper work. Apart from that, things on the outside are similar. 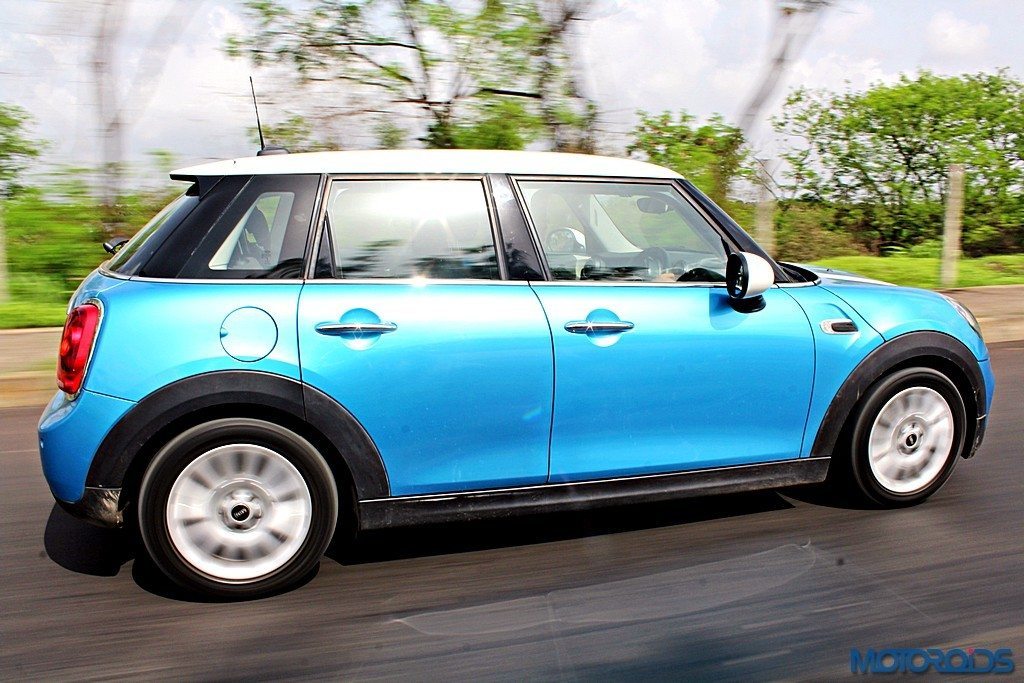 Aside from the addition of the rear doors, the 5 Door also gains 161 mm in overall length and 72 mm in wheelbase over the more familiar 3 Door, while overall length is now up to 3,982 mm. Both the cars can be had with a choice of decals, stripes, alloy wheel options and Aspen White or Jet Black contrast roof & mirror cap colour options. And if you can’t wait for the new Mini Convertible that’s just out, an optional, INR 1,25,000 worth panoramic electric glass sunroof is your best bet. 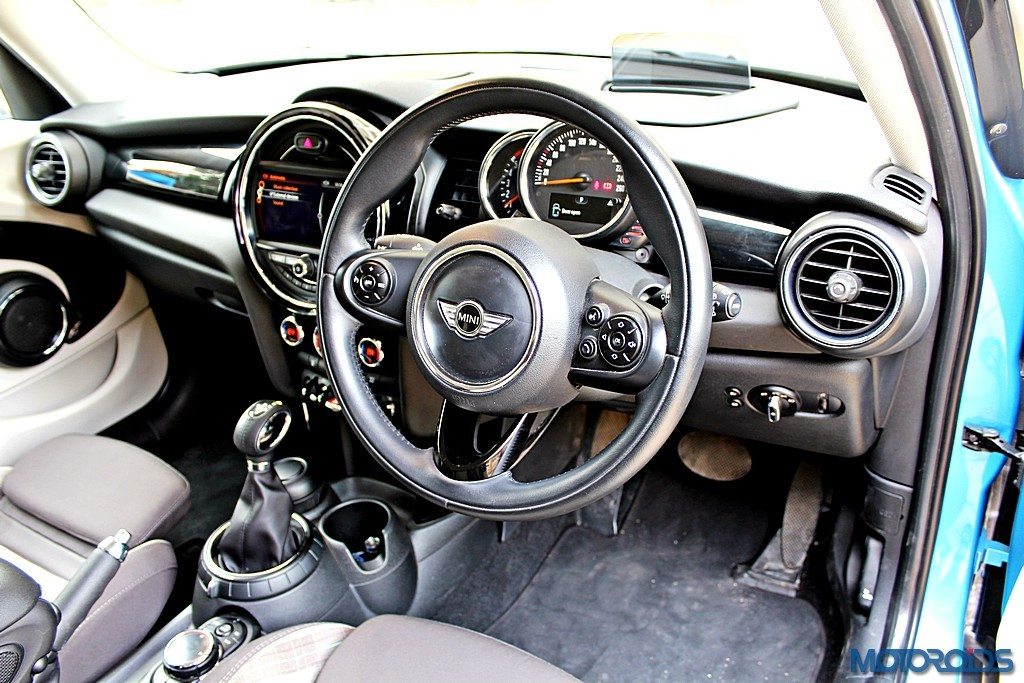 The interiors of both the cars are similar to the S as well, and they’re a very special place to be in. Layered with premium soft touch plastics, piano black trim and tasteful Satellite Grey upholstery, the insides exude an old worldly charm, yet are as contemporary as ever. The trademark circular theme dictates the design of the centrally positioned display unit, instrument cluster, outermost HVAC vents, door pulls and the knobs for the dual-zone climate control. The 6.5-inch full colour, touch-screen display is a part of the the costly (INR 70,000) Radio Mini Visual Boost option, while the sexy Head Up Display option for the driver can be had at a cool INR 80,000.

Quite a few elements on the inside have a period touch, especially the button bank which lies at the bottom of the center console. Individual, chrome licked toggle switches represent the traction control, HUD on/off controls, along engine start/stop. By a fair stretch of imagination and time travel, one can almost feel the moment, as fingers draped in soiled, racing gloves click away these toggle switches as the smoky cabin is rife with race day noises.

Luggage compartment volume in the 3 Door has been increased by 51 litres to 211 litres over its predecessor. In comparison, the longer 5 Door offers 278 litres of boot space.The rear backrest is fold-able with a 60 : 40 split in both, while one can set the mood with the optional lighting package with LED interior lights and orange-coloured ambient lighting. However, the rear seats are a squeeze for adults, while the fixed rear windows don’t help much.

Access to the rear seats is easier on the 5 door than in the 3 Door, because duh.. However, it’s a similar story when talking about space in the back. It betters the 3 Door by a fair margin but isn’t still generous in terms of knee or shoulder room. The second row backrest is also a bit too upright for comfort. The small windows don’t help matters much here as well, while the seats could also do with a longer squab.

Thankfully, the front portion of the cabin is a whole lot nicer. The lissome front seats have bolstered extensions that’ll provide all kinds of support to an excited human being. The Cooper D offers beautiful cloth-leather combination upholstery options that you can shear out from the cabin and sew a fashionable blazer out of, while certain trim elements in the cabin could earn you a fortune in a pawn shop. 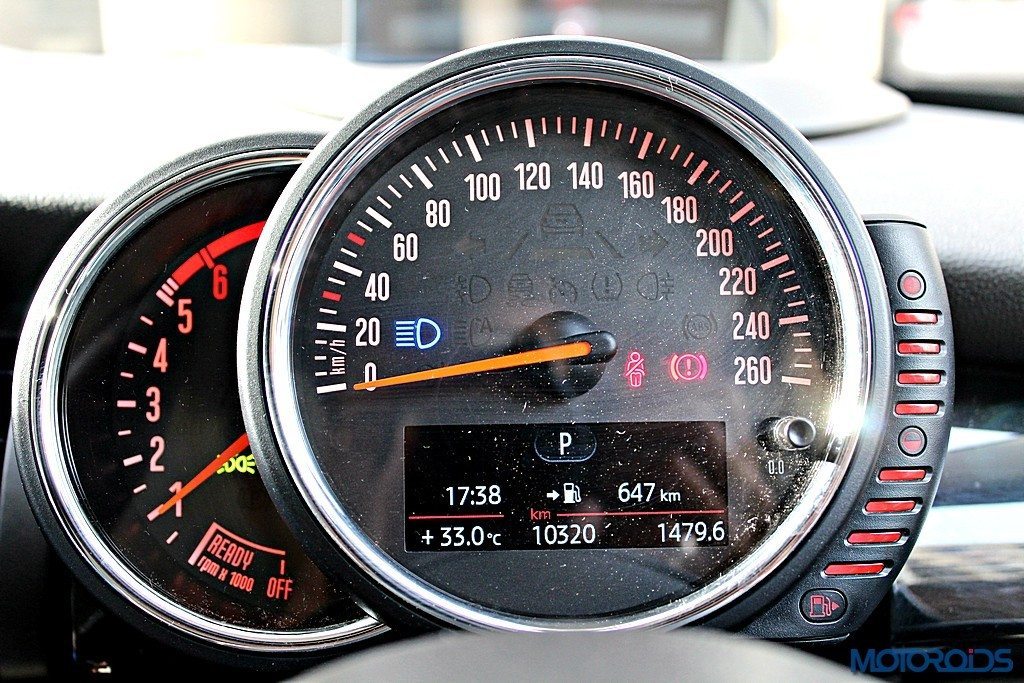 The retro themed instrument cluster moves behind the steering wheel from the center console for this generation. 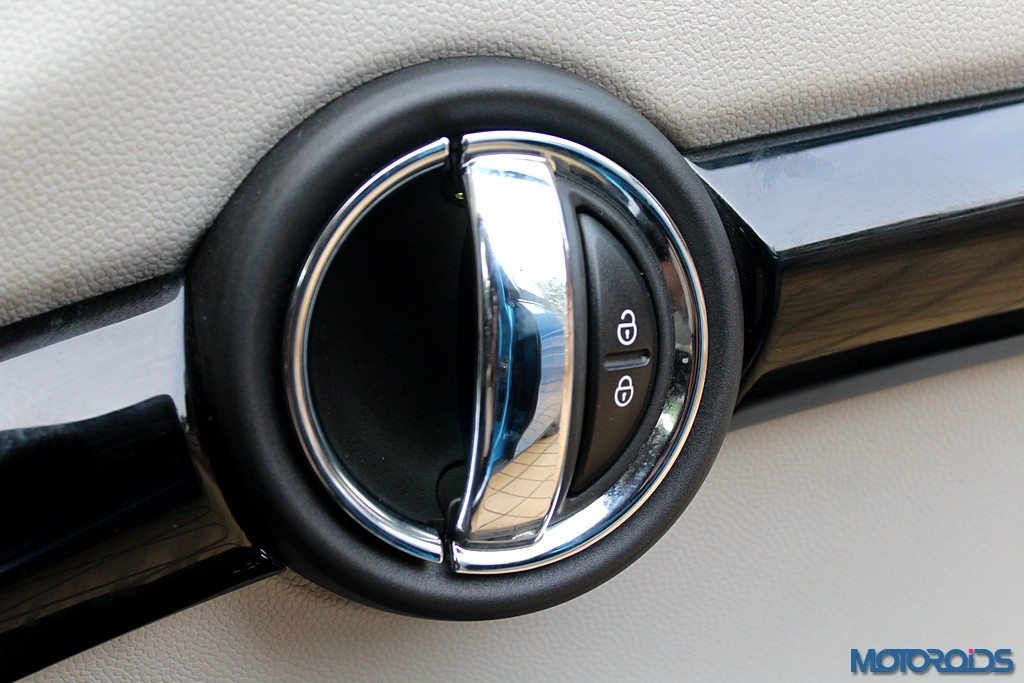 The INR 20,000 worth Chrome Line interior packs adds discreet touches of chrome throughout the cabin. 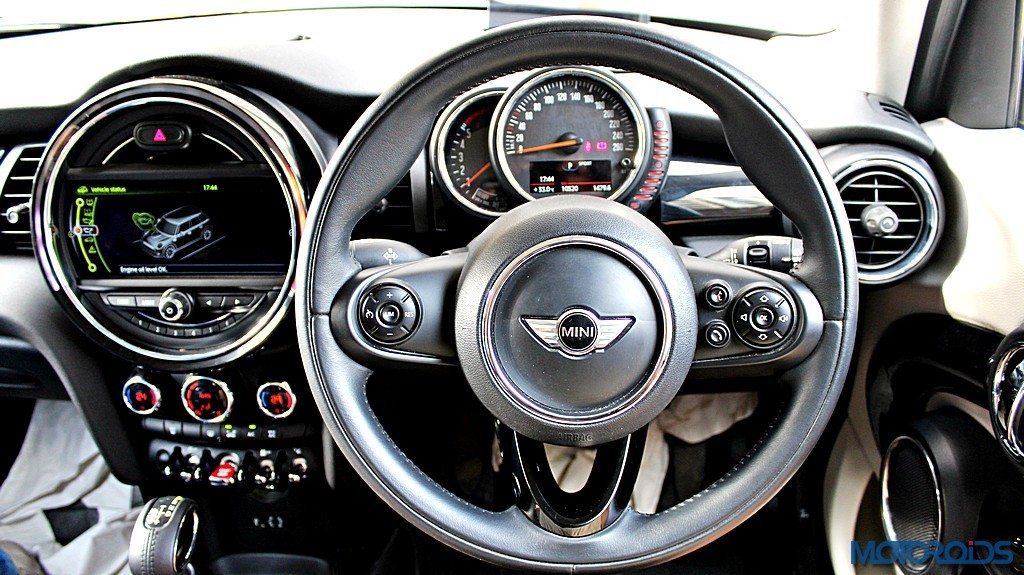 The Mini Yours Sport Leather Steering Wheel is a INR 30,000 option. 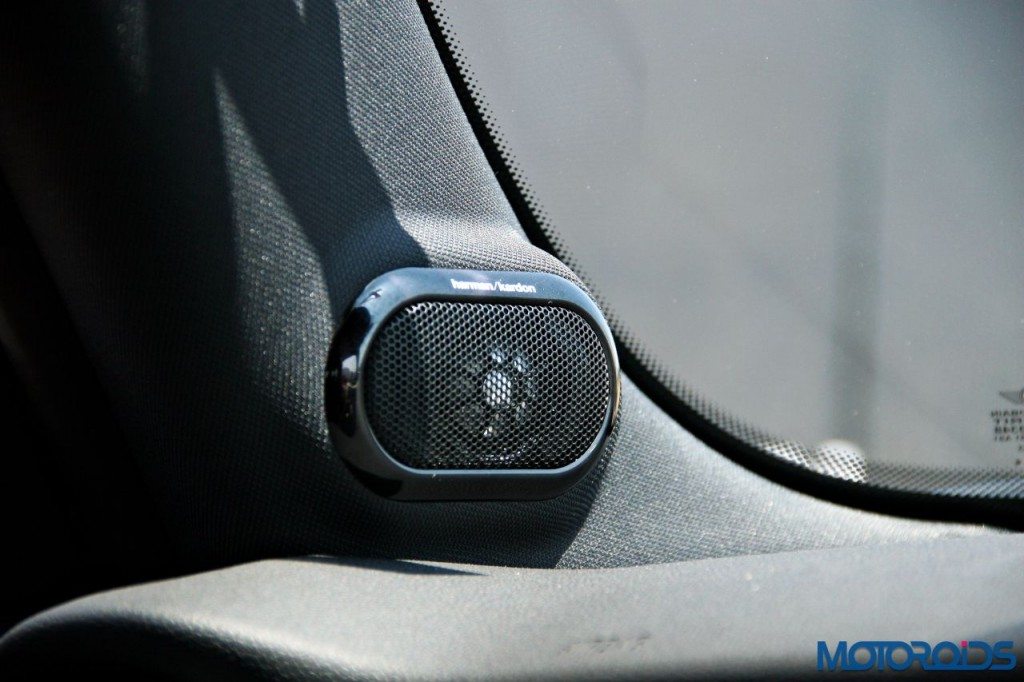 At INR 1,15,000, the Harman Kardon Hi-Fi system takes the cake as the Mini’s most expensive interior equipment option. 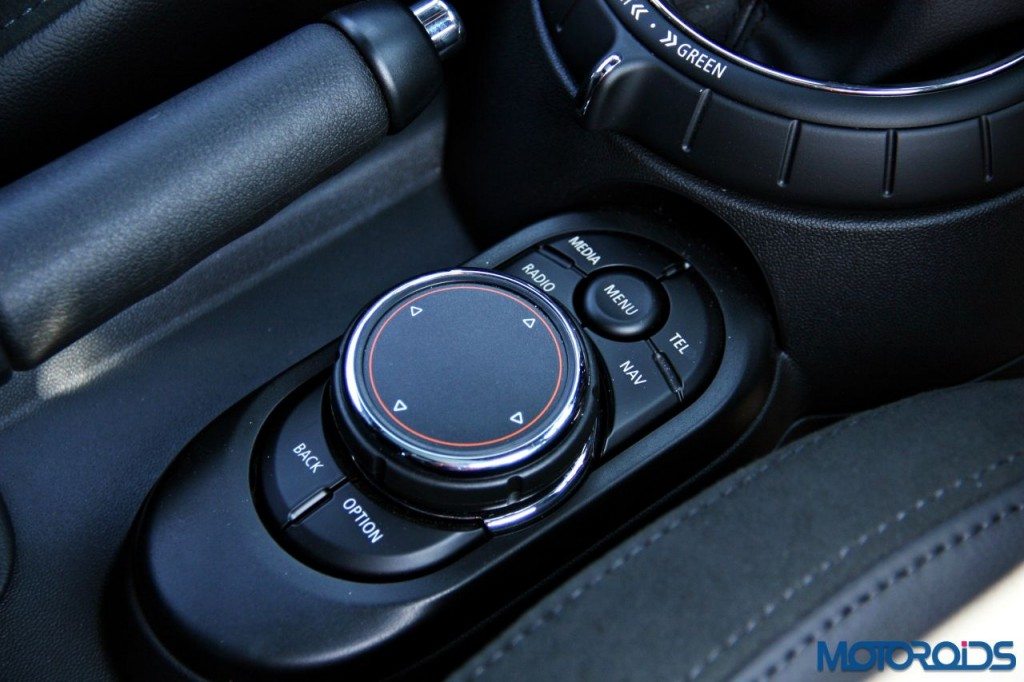 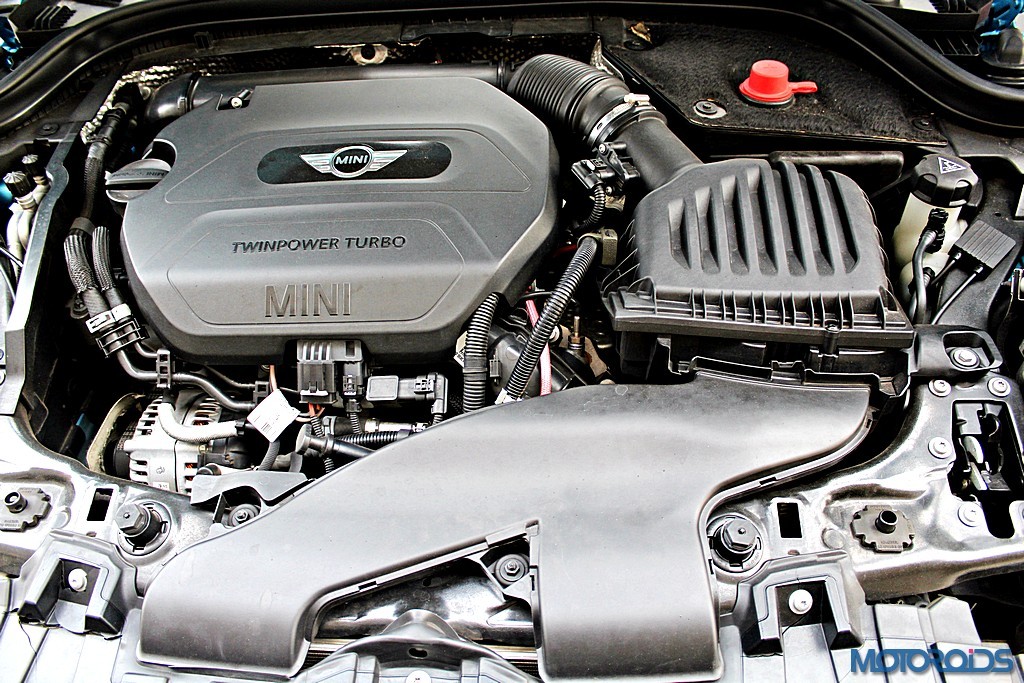 The new Mini Cooper D is powered by a 1.5-litre 3-cylinder diesel engine that can generate a maximum output of 116 hp @ 4,000 rpm and peak torque of 270 Nm from 1,750 to 2,250 rpm, giving it performance credentials of 0-100km/h in 9.2 seconds and a top speed of 200 km/h. Yet. What’s more, fuel efficiency is rated at a commendable 26 km/litre. Transmission duties are handled by a six-speed, dual clutch automatic transmission with a manual mode. The transmission sends power to the front wheels.

Refinement levels are remarkable for a 3-cylinder, diesel engine. Whatever noise filters through is essential for a motoring experience. Clatter is exceptionally well contained.  Roll up the windows and the chrome lined; immaculately upholstered cabin is swept by supreme silence. 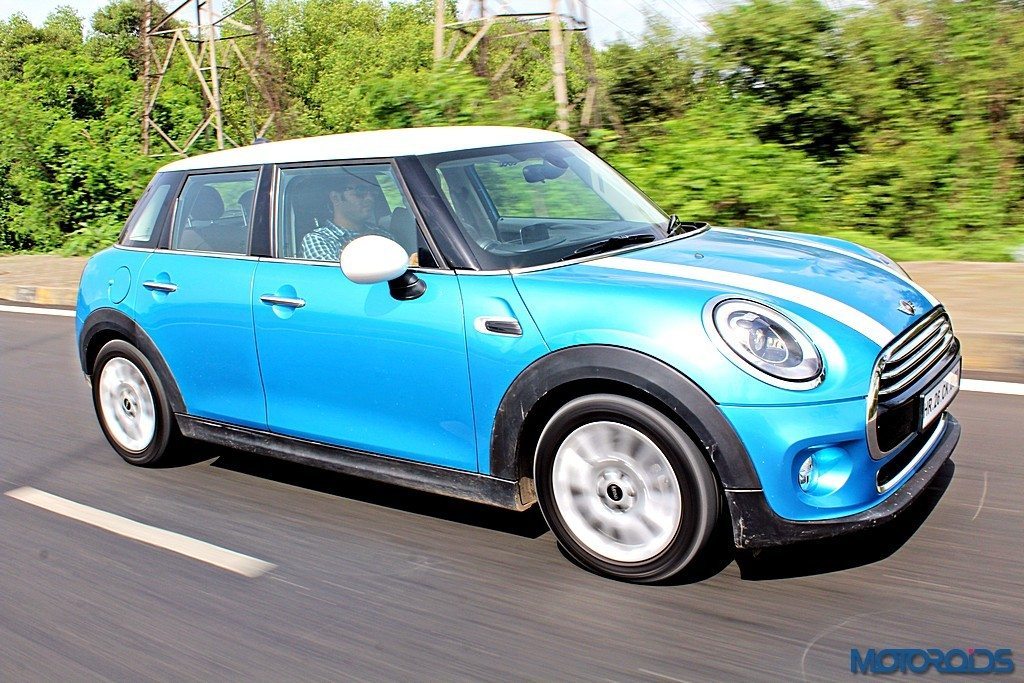 The Cooper D is not quick by any perceptible means. Bury the go-faster pedal and there isn’t any sort of rush, that one associates with the S. That said, power delivery is progressive, with no lag whatsoever. It might not shoot away from the lights in a jiffy, but it makes up for the mid-range grunt.  80-120 km/h in 4/5th gear takes a shade under 9 seconds for the 1,225 Kg heavy Cooper D  (5-Door). The BMW brewed engine is, not surprisingly, quite rev happy for a diesel motor, and doesn’t mind at all when you give it the beans.

For the first time in Mini history, the Cooper D also comes with the new Mini Driving Modes – MID, SPORT and GREEN, each of which can be selected via a cool, rotary switch at the base of the gear or selector lever. The MINI Driving Modes influence the ambient lighting, the displays in the circular LED centre instrument, and more importantly, the shift characteristics of the automatic transmission, along with the steering sensitivity. While the GREEN mode tunes things to consume as less power as possible, SPORT authorizes sharper responses from the Mini’s hardware that makes you quicker. 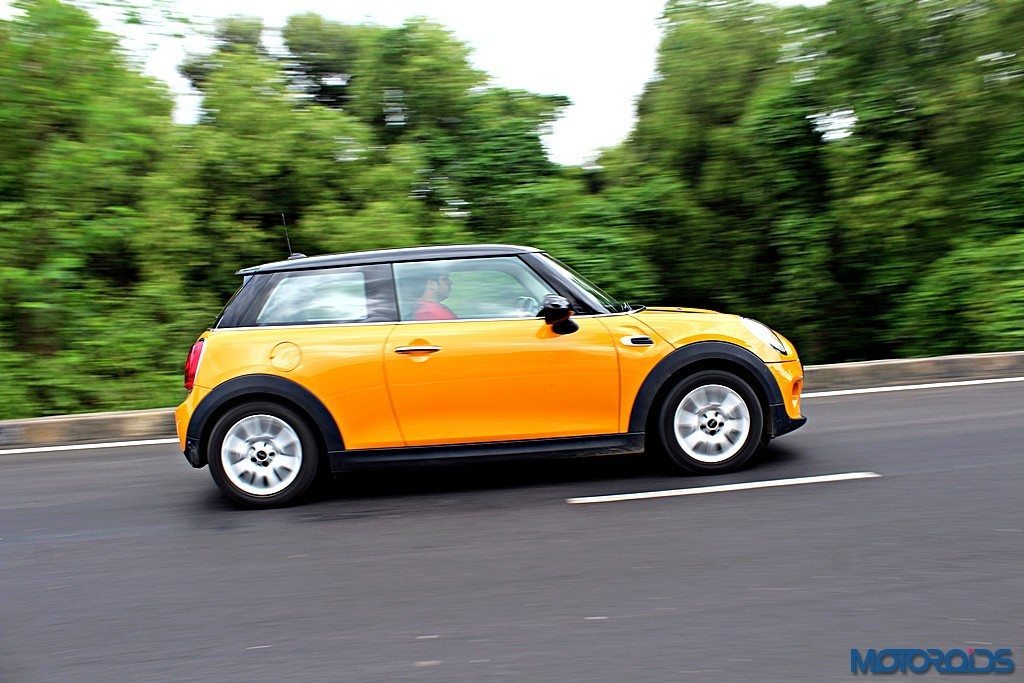 Which one do we prefer? Well, it totally depends upon your mood. Feel like taking a leisurely cruise to thwart the guilt about that sooty carbon footprint, or just like that? Click to GREEN. A regular office commute calls for the MID mode, while a small shot of dopamine in the brain calls for the SPORT mode. Truth be said, the differences aren’t that pronounced as in the hot-blooded Cooper S, but the modes do make their presence felt.

The power assisted, electromechanical steering wheel feels terrific to hold, making the BMW connection quite evident with its distinctive rim thickness. Feedback isn’t the best, but the Servotronic assistance at lower speeds tries to emulate a hydraulically assisted rack, which works pretty well as long as you don’t push the car hard. 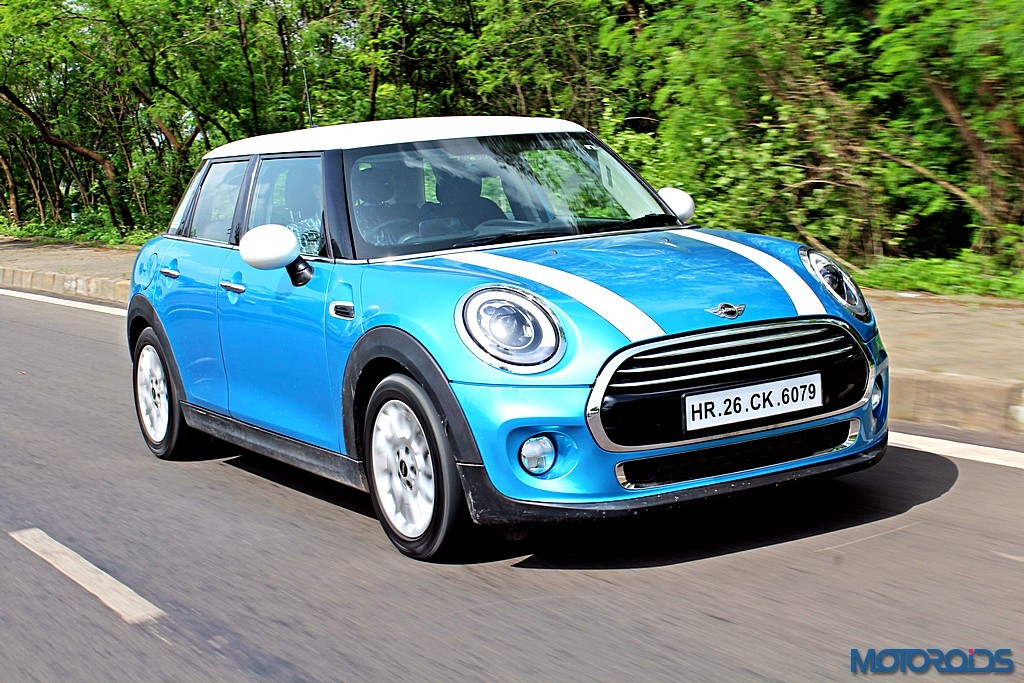 Keeping the tradition intact, the Cooper D twins handle exceptionally well, even with a non-traditional front wheel driven setup. With nimbleness that shrinks its size even further, the Mini sticks to the road like a leech. Roundabouts are best enjoyed with a dab of steering lock, and then feel smoothened cowhide rub against your palms as the BMW bred, expensive wheel comes back to centre. When you’re beating it around anything less than a proper race track, there is next to no under steer to be felt. The front tires bite the asphalt as the Mini darts out or corners, the 3-cylinder diesel engine giving all it has. The go-faster Cooper S exits corners like a smooth stone riding a slingshot, but the slightly economical engine in the D is tamer. Of course there’s BMW computed traction control and stability control to keep you out of the bushes, but they’re all very friendly and don’t mind you fool around a bit with the handling. 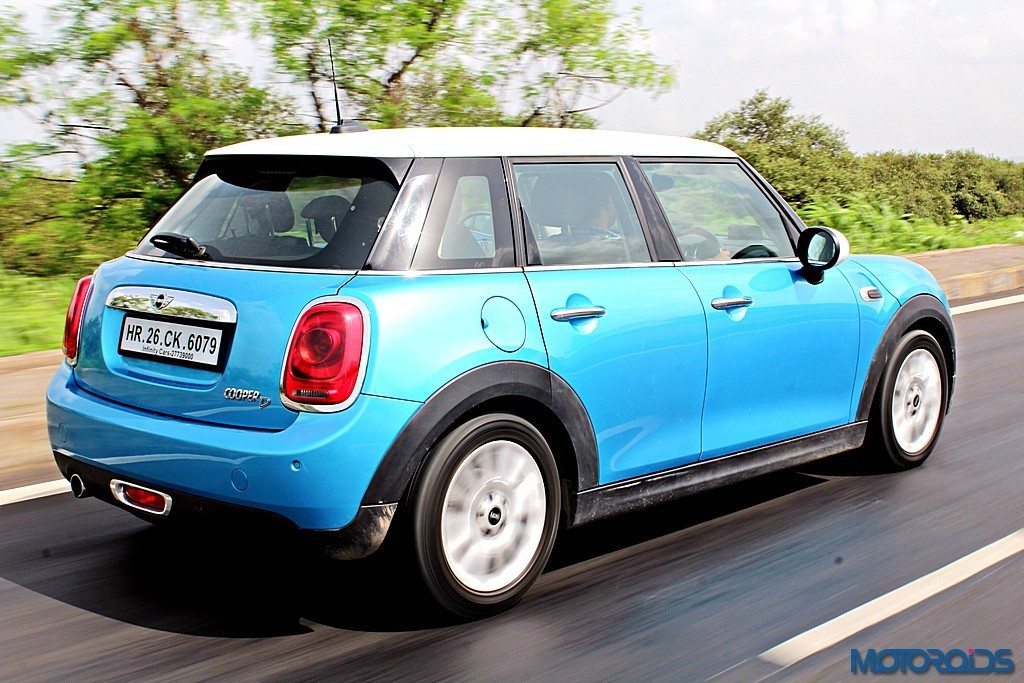 There is a very distinctive European feel about the way a Mini Cooper rides, which, not surprisingly is a lot similar to a way a BMW rides, especially the beefed up M models. Which goes to say that the Cooper D’s  ride is on the stiffer side, but the suspension is remarkably competent, and the giveaway is that enjoyable kart like handling. The 3 Door’s marginally stiffer and feels tauter owing to the shorter wheelbase, but barely does the car feel unsettled. Low speed damping is a tad bouncy, but there’s a clear personal touch to the ride. One understands what the car is doing, and what each wheel is up to. Even at low speeds, cobblestones and mild undulations honestly filter through.

Who is the Mini Cooper D fit for? 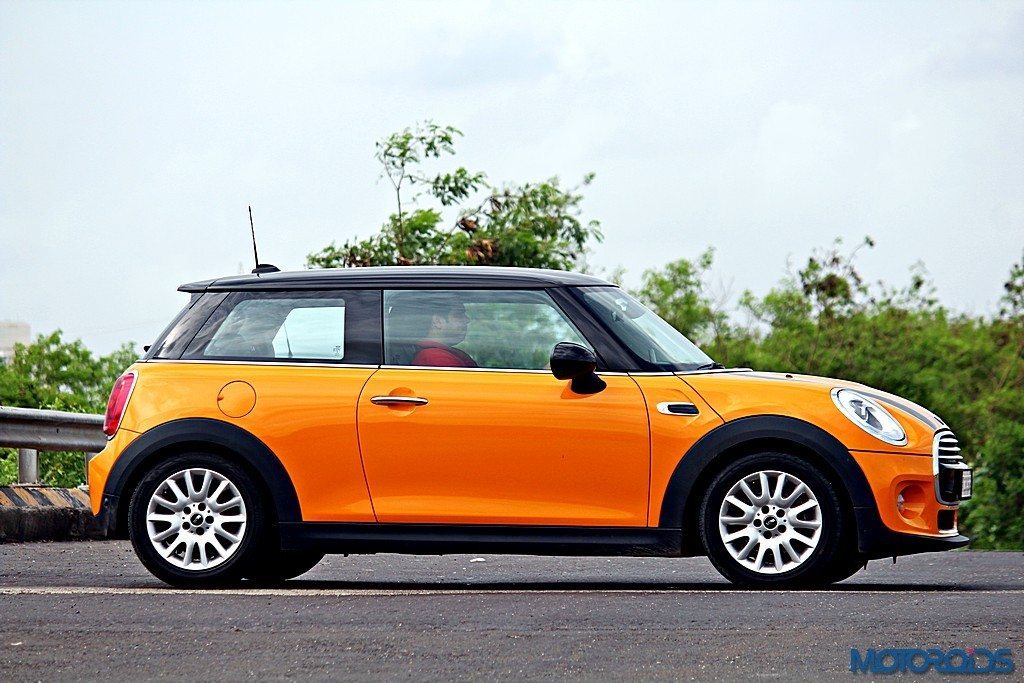 One friend put it this way – If you have a trophy wife for whom your Yas Marina Blue BMW M4 parked on the driveway is too hot to handle, the Mini Cooper D is the best bet for her automotive upkeep.

Its timeless style will never be boring, and those retro-futuristic interiors will give her Louis Vuitton handbag perfect company. She’ll enjoy the refinement like she does her wine, and the cloth-leather smell of the insides like the bottle of Chanel you bought her a week back.

She’ll be completely at home riding the friendly power delivery, helped by the intelligently tuned automatic transmission. What’s more, when shopping for it, she’ll go through the expensive options list like she goes through dresses at the boutique. 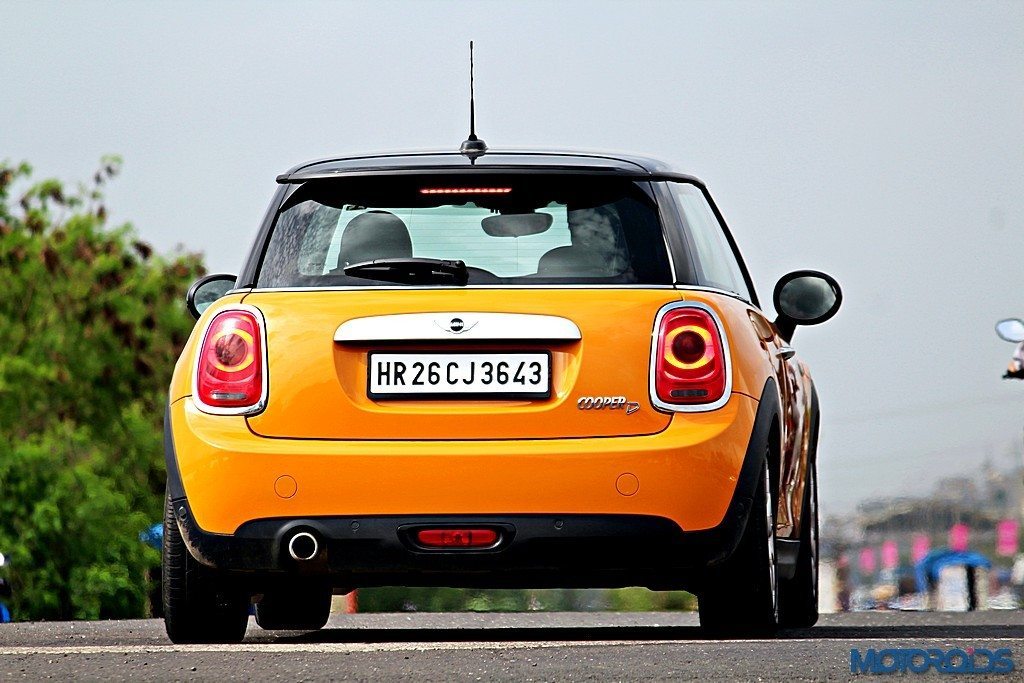 5 Door or 3 Door? The 5 door version makes sense if she’s quite social, and enjoys her brunch at the Taj with other shapely women. But we think the 3 Door looks hotter, and it makes up for her friends’ undignified entry to the rear seats.

The twin’s are economical too, and she can go from Peddar Road to Aamby Valley for lunch and back on a single tank, and still have enough fuel left for that late night escapade if she wishes to.