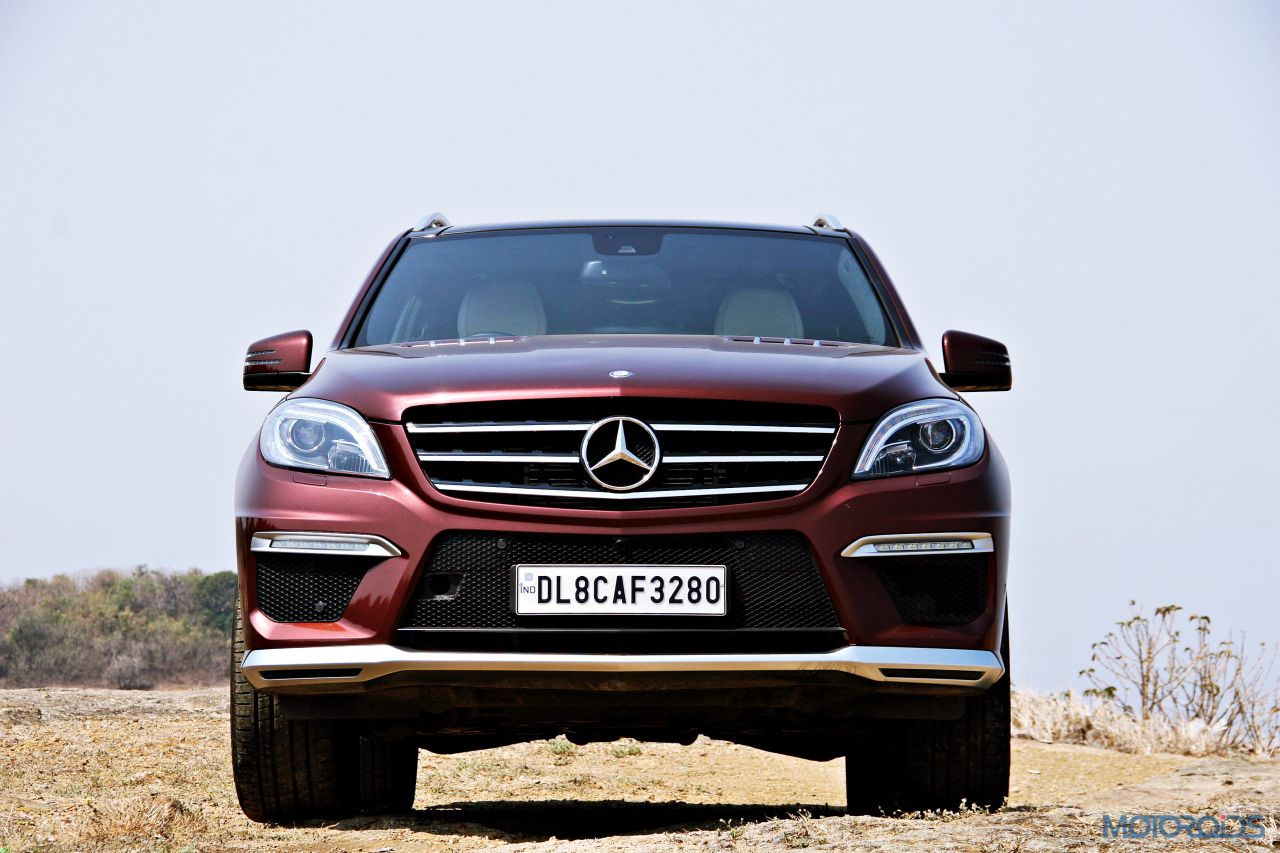 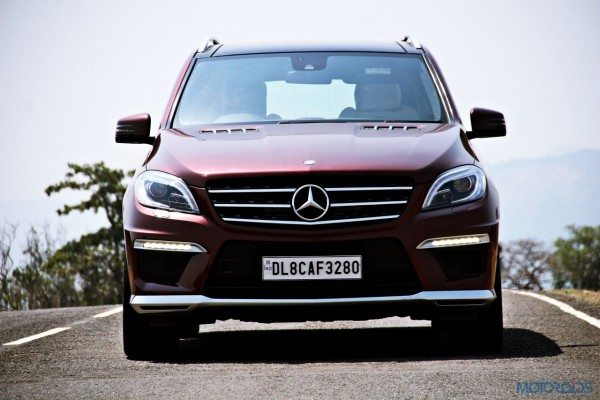 I have to shamelessly admit that I’m more of a purist who likes purpose built things. I like stuff that is made to achieve a sole objective alone, everything else that it does in the process is a side effect. To me personally then, the concept of fitting a rocket under the hood of an SUV seems unnecessary, maybe pretentious, perhaps pointless too. It is like fitting a shaving razor to the other end of a toothbrush so that it makes it one item less in your dopp kit. It can be done, but would you really want to shave using a toothbrush? Explainably so, when the opportunity came along to drive the Mercedes-Benz ML63 AMG, I was rather sceptical. 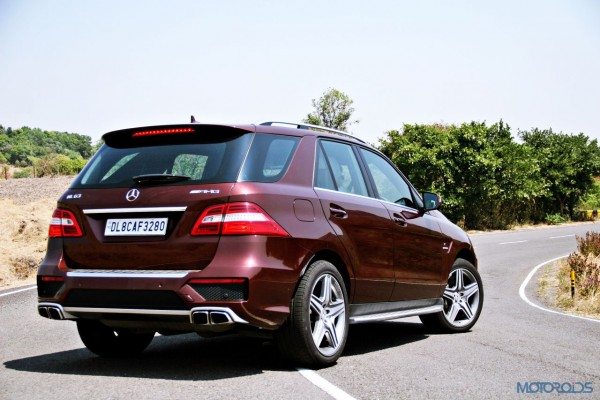 I knew it was an AMG and that it must be shouty, purposefully demented and like the Editor insisted, even special. Reasons enough to put a glow on anybody’s face then. But you see the problem with a man’s ego is that it always plays an upper hand in making us behave in the weird manner that we do sometimes. So while I could’ve just passed the opportunity over and taken a ride in a red bus back home, some lunacy overpowered the ego, and I decided to give it a go. I magically managed to bleach all my reservations, apprehensions and decided to experience this car with a little Buddha inside me. 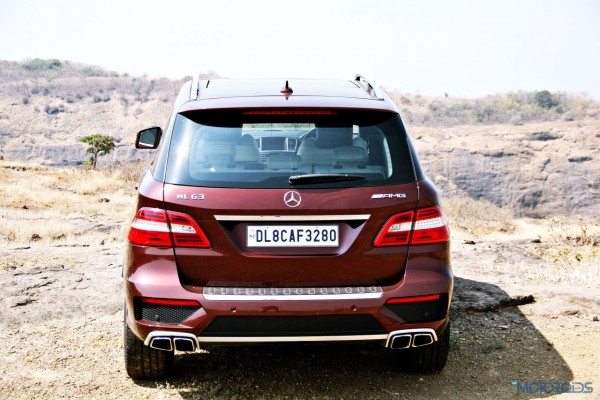 A little journey out of town and there it was, sitting under the shade of tree. I walked towards it sceptically, as the wine red thing sat there, its rear facing towards me. It was like tapping the shoulder of a stranger, who you have a feeling is that person you know, but aren’t sure if you really wish to meet him. I greeted anyways, it was the chauffeur who shook my hand and handed over the key. Buddha went missing for a moment, when I almost smirked looking at the size of that thing. I questioned myself if I really should even get inside and drive, or rather ask the Editor to do the honours. He’s always had this strange liking towards MLs. Some liking which I found strange. 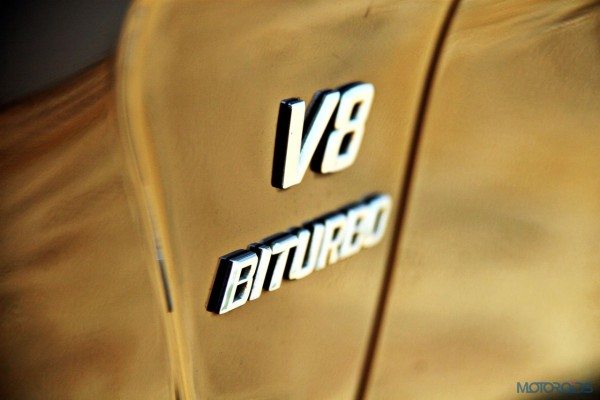 Strangely remembering one of those inspirational quotes you find inscribed outside any Church in Bombay, I decided to seek, not knowing what I’d find. With that fob in my hand, I gave those quad pipes pouting out from beneath the bumper a blank stare and walked towards the door. Was it a door that opened into some space where instead of pulling, gravity pushed? Or was it some door that opened to affirm my obvious reservations about a flabby sprinter? 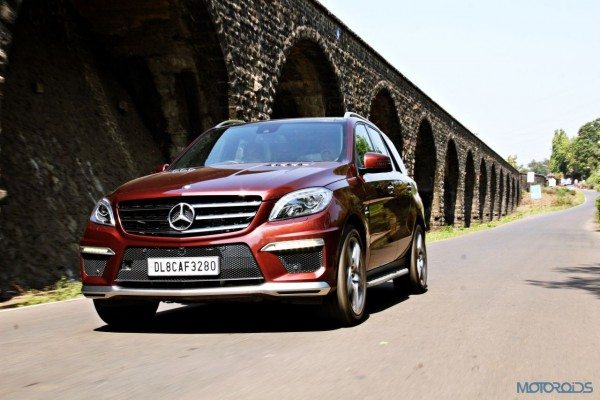 When you know that a car weighs nearly two and a half tonnes, no matter what black magic happens under the hood, it is easy to imagine that behemoth as a monster who will fight back with every steering input around corners. However, at a time when an opportunity to explore the virgin galaxy is about to become accessible to peasantry souls, such thoughts are better buried somewhere inside the Sputnik. 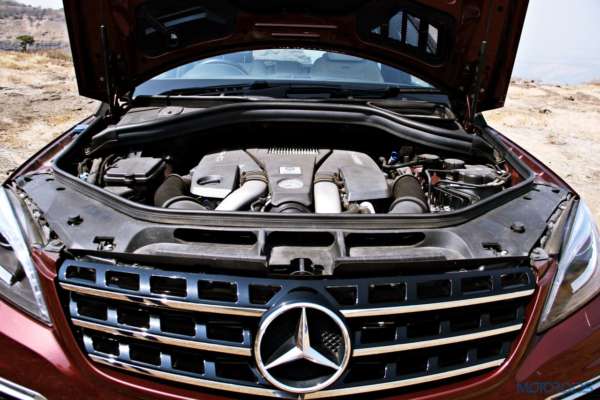 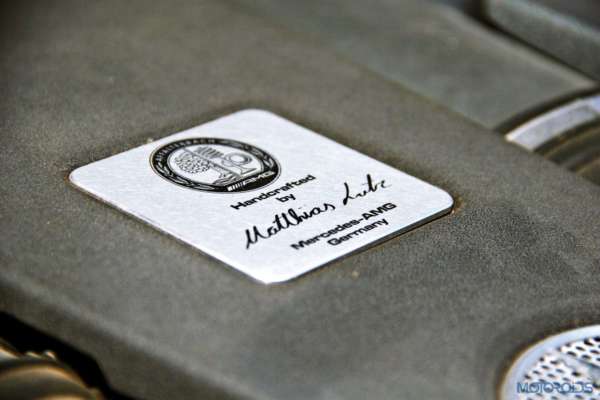 If you too are one of those who finds performance SUVs silly, the Mercedes-Benz ML63 AMG  flummoxes and hurts your ego so beautifully, you never would be so glad otherwise for having been proved wrong. Powered by a hand built twin-turbo V8 motor that commands all the attention of a sole horsepower obsessed soul, displacing 5461 cc, the ghost of an engine develops 550 demonic bhps and 760 Nm of soul twisting torque between 2000 – 5000 rpm. Such is the might of that lunatic powerhouse; it pulls the big Merc from standstill to a 100 kays in merely 4.7 seconds. 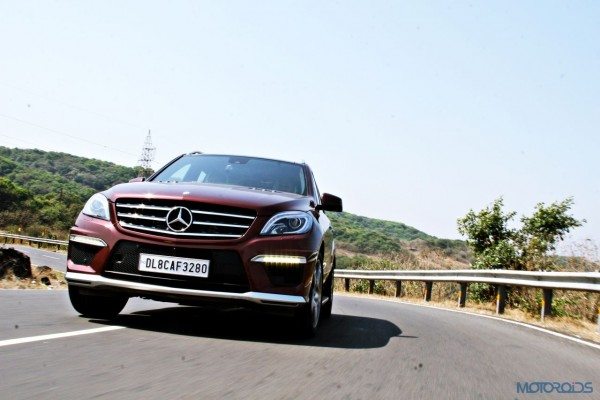 While you’d expect a typical fast car to shake its booty when you floor the pedal and gun for it off the mark, the ML63 takes off dead straight like a vertical projectile. As the large hearted motor makes the blood inside gush through the head, the 4-matic all-wheel drive system distributes engine power at a ratio of 40:60 to the front and rear and glue like grip from those Pirellis sends your head in a tizzy. Try as much as you may, you’d have to offload a truck full of bananas on the tarmac and drive on it to make this big Merc lose its composure. 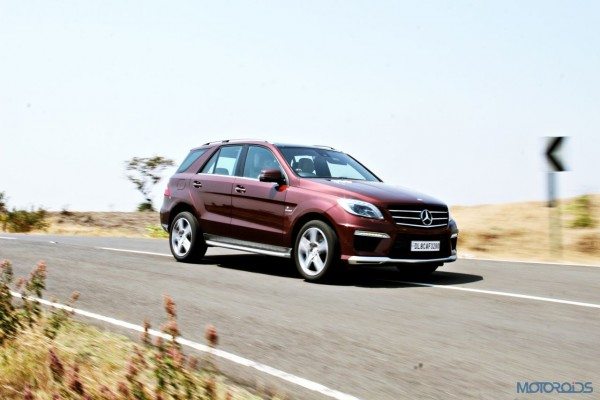 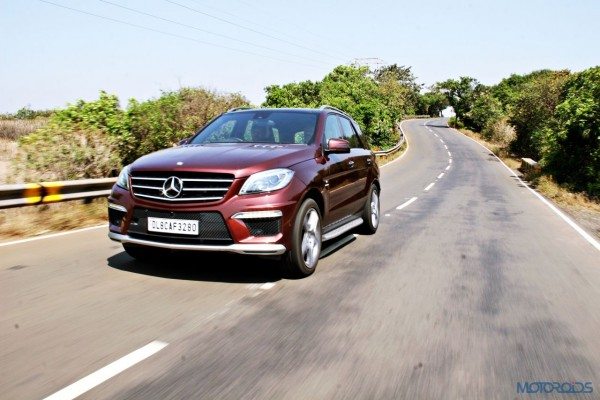 With my dumb reservations about pointless fast SUVs vaporizing real quick, I found myself hurtling the ML63 around fast bends like a go-kart, beating my orthodox love for fast cars to death. The way this dragon held its line through a corner, how it felt taut like a monolith and how even its hips wouldn’t lie through a fast left hander that had a crest thrown in, left us dumbfounded. We even tried to throw all of the ML63’s towering height and earth like weight into fast S’, but with the suspension set to the AMG+ mode and a roll stabilizing ACTIVE CURVE SYSTEM at work, not even a reverse spinning earth could make this AMG lose composure. Ensuring that ML63 AMG isn’t just a drag strip hooligan are features like an AMG-developed sports suspension with AIRMATIC air springs, independent damper struts, automatic level control and Adaptive Damping System (ADS). Even with such wizardry at work, for an SUV to display such poise, that says something. 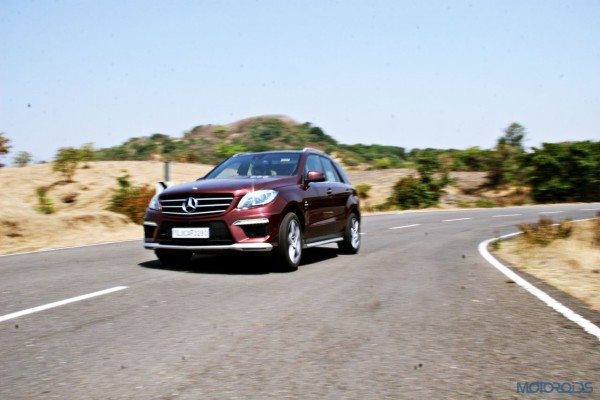 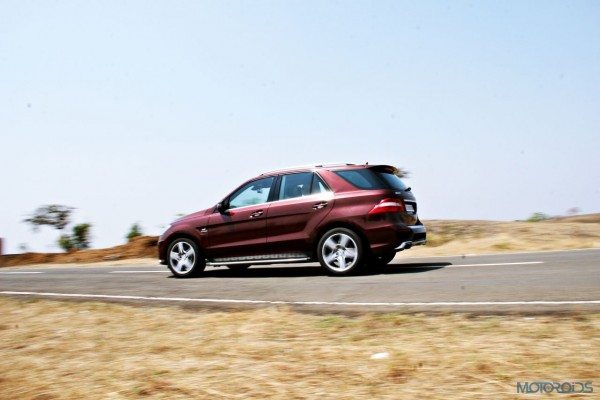 While we were still dumbfounded at the ML63’s driving dynamics, it threw another surprise at us in the form of its ride quality. With different settings to choose from, the ride quality of the ML 63 AMG isn’t squishy at any given point of time, but remains comfortably firm and pliant. It is only in the AMG+ mode that things get really firm; although not so much that it makes you feel like a passenger on a wooden sleigh sliding down on rocky ice. 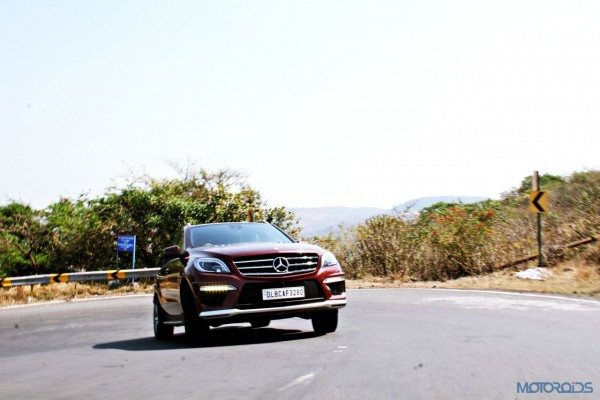 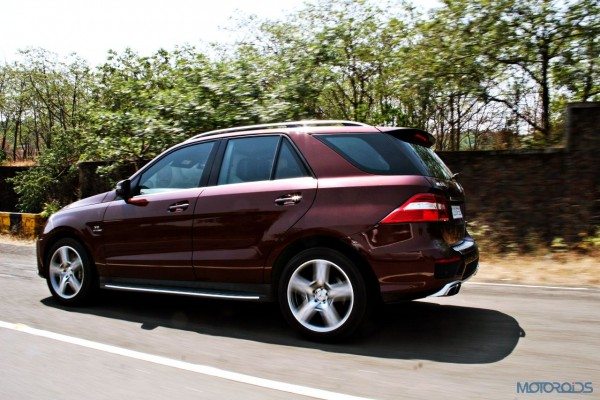 There are three driving modes to select from between Manual, Eco and Sport. We really didn’t bother much with the Eco mode, which upshifts early and makes the first gear feel like a retard, making the car get off the mark in second, to maximize efficiency. The Sport and the Manual mode then was where we revelled in the most. While the former applies its mad German wit to upshift near the redline with a little intoxicating hiccup, it even blips a little burp with every downshift. The manual mode on the other hand, lets you take charge and experience the shove in the seat feel, the motor charging away to glory, starting from 2000 rpm, all the way to its 6500 rpm redline. Shift action isn’t lightning quick from the AMG Speedshift Plus seven-speed automatic transmission, but automatic double-declutching on downshifts is a major plus. 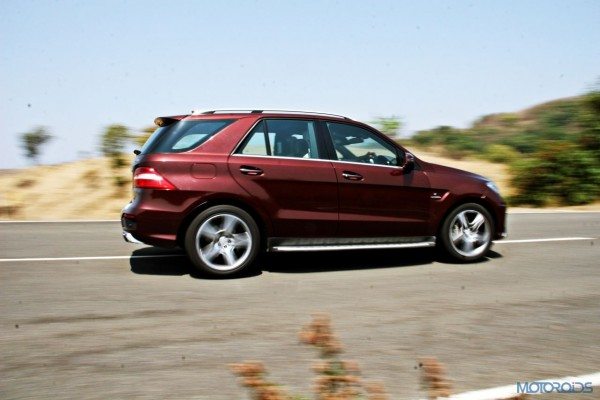 On an empty straight stretch of tarmac, the ML 63 was blazing away, just 10 kph below its electronically limited top speed. Even while cheating a cumulonimbus cloud of wind at those speeds, the SUV masked its speed so well, there was nothing inside the cabin, except a nervous passenger and the speedometer to tell what was being blurred outside. The Mercedes-Benz ML 63 AMG is so good at masking the paranoia it creates outside, it wouldn’t tell you how all of that two and a half tonne mass is working really hard to please you. 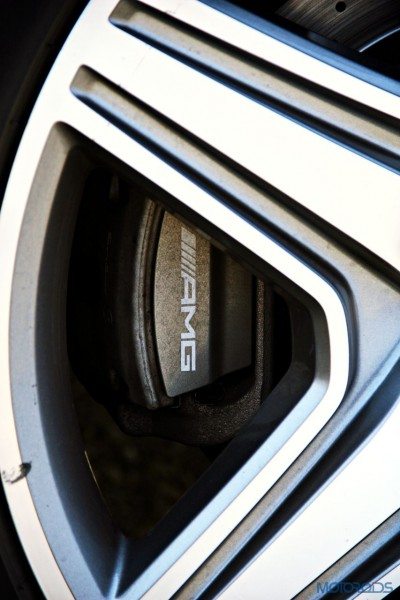 Getting to silly speeds is rather easy for this T-rex, however, those AMG brakes acted like a hand of God in bringing this maroonish avalanche to a stop. The electromechanical steering system is wonderfully light at slow speeds, and in the AMG+ mode, it weighs up beautifully and develops enough resistance. It isn’t all that alive though, and that would qualify as a complaint only if this was a 2-door AMG GT. 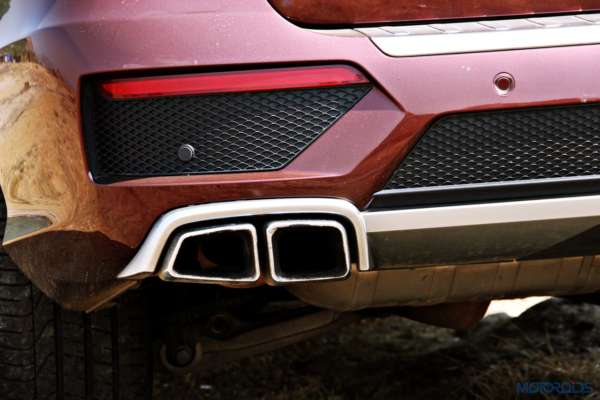 Now, all the above aren’t exactly the reasons you’d go out and buy this AMG SUV. Among all the aces the ML63 has up its sleeve, one factor alone trumps it all. It isn’t some card, but the aphrodisiac roar that the throaty AMG exhaust system blares out of those quad pipes. Although no animals were harmed during our time there, driving on a road that was surrounded by a dense forest, that throaty tone must’ve sent lemurs and squirrels climb up towards safety. It must’ve made high flying ravens drop down like a rock for no reason and sent every living creature in the vicinity run for cover, not knowing who this new predator was. Like a forest inferno, the roar brought that place alive with its sound, leaving everything else stone dead in awe as it passed by. When we stepped outside after devastating the place with some aural antics, we felt like a famed hunter resting under a tin roof, after a kill on a rainy day, as the hot AMG pipes contracted and cooled down, emanating a pitter patter sound.

Next page for an Image Gallery…