The Verito Vibe is another strong value package from the people’s champion, Mahindra. It would be tough to find an auto brand in India whose products spell more value than M&M. Right from the hot-selling Bolero to the bigger Scorpio, the products from the M&M stable are offered at an unmatched price and hold their value really well owing to their reliability and ruggedness.

In that context, the recently introduced, Logan / Verito based Vibe comes across as an important product. The hatchback segment is the single most important category for most carmakers looking for volumes, and the expectations from this new hatch would be high. Does the Vibe manage to meet the lofty expectations of our unrelentingly value seeking populace in this already tough to crack market. We just took the new hatch out for a spin to find out. 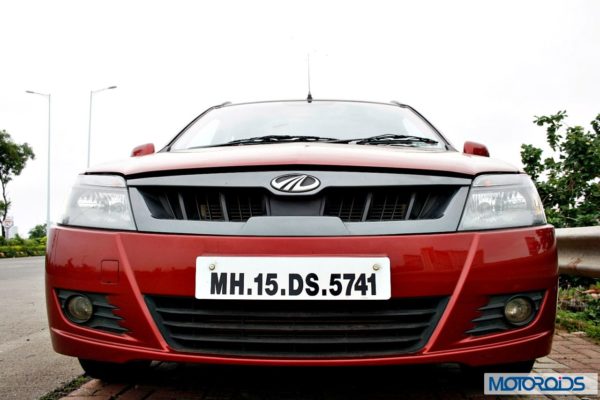 The Mahindra Verito Vibe shares its platform with the Verito Sedan. The `shrunk` version of the Verito is easy to tell from the overall design. A glance from the front three quarters, and the Vibe instantly reminds one of the Verito, nee Logan. To give the Vibe its own identity, Mahindra has replaced the chrome front grille and given the Vibe a “Carbon finished” treatment. The headlamps have smoked effect adding to the sportiness of the new look.

With the Vibe, Mahindra has introduced a set of Champagne alloy wheels which complement the overall design of the car, especially the “Toreador Red” shade that our test car came splashed in. We can imagine how handsome the Vibe would look with the “Fiery Black” shade on the offer. The rear end of the Vibe is the area that has been totally reworked by Mahindra and remains a talking point for the most. 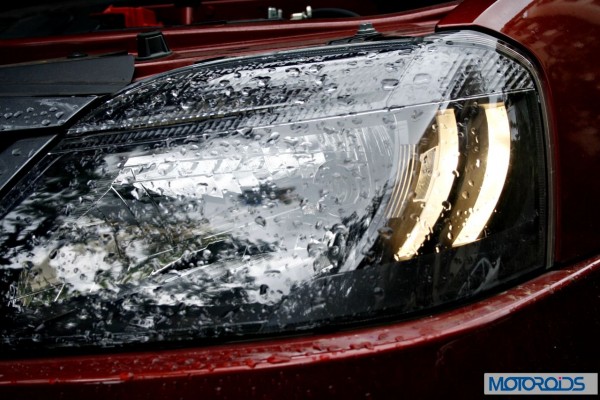 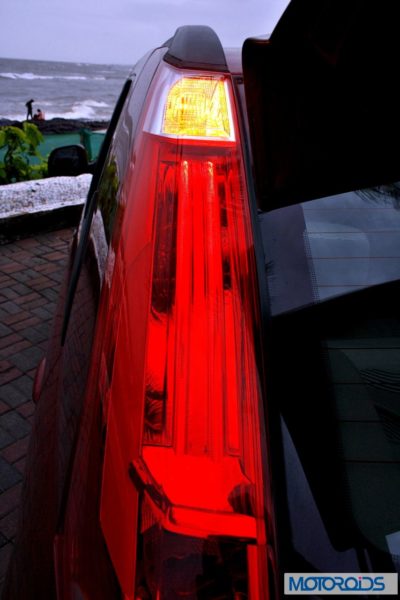 This compact saloon comes with Ski racks which merge into the tail lamps and further underline its sporty intent. Adorned with “Light Streaming LED Tail Lamps” gives it a Neon tube effect within the tail lap unit and look quite spectacular once the dusk sets in. The stop light however isn`t an actual LED as suggested by this feature, nevertheless it does manage to turn heads. The catchy tail lamp unit remains by far the most visually attractive element of the car which is not flush fit with the rear windscreen making them a standout feature. 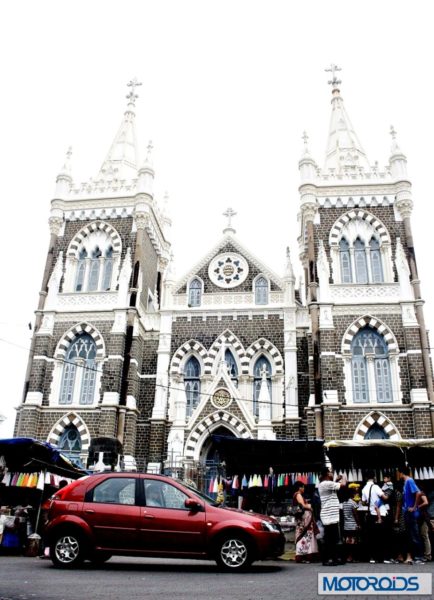 The rear windscreen meets the rear hatch which is hinged under the fixed rear parcel shelf. Unlike a normal hatchback, the rear windscreen remains fixed and hampers the usability of the boot. At 330 litres, the boot itself is big enough to accommodate more luggage than what it can swallow. While the proper hatch door is desirable, keeping the costs in check this remains the only solution for manufacturers. Externally the boot lid incorporates a lip at the base of the windscreen which is steeply raked like its elder sibling. 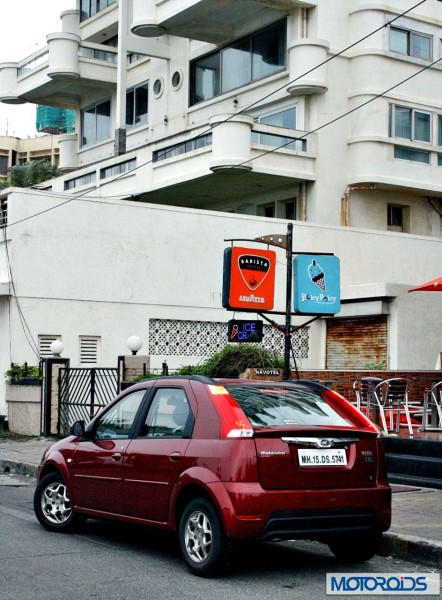 The license plate recess has a chrome applique above it with the Mahindra logo embossed on it. The chrome treatment keeps the rear look of the car fresh with matt back dual tone bumper completing the rear end. The only grouse one can point out is the panel weld line below the tail lamp which remains an eyesore to an otherwise neat design. While the smart looking rear is a mismatch with the dated and plain looking front, the overall looks of the car tend to grow on you as you spend time, and look less contradicting eventually.

Next page for interiors and features>>> 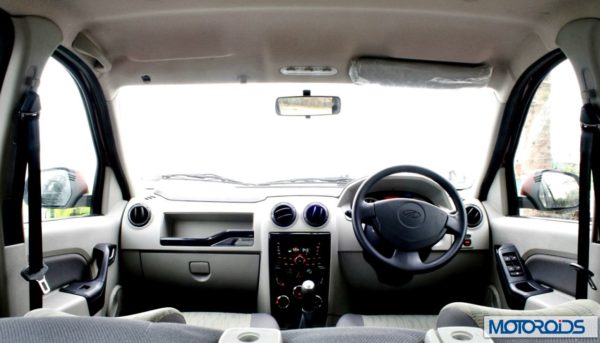 Being based on the Verito, Mahindra can proudly boast about the Vibe`s class leading interior space and the comfort that comes with it. The doors open wide making ingress and egress a breeze. Once inside, you are greeted by the interiors which are a straight lift from the Verito. What adds to the roomy interiors is the Quadra tone treatment lent to the dash. 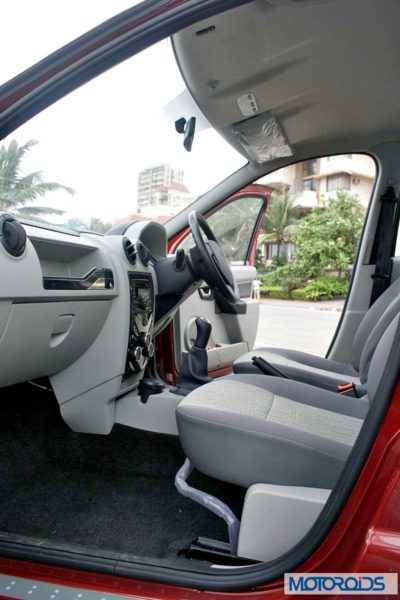 The dash is topped with a matt black surface, however it is the beige colour that adds to the freshness. The air-con vents which are circular, come with grey carbon surrounds. The Nippon made two DIN music system incorporates the now so standard USB and AUX connectivity, surprisingly it failed to detect our iPhone when we tried to connect it. The air-con controls are un-ergonomically placed below the music system and do not fall easily within reach to operate while driving. The entire unit comes with a faux carbon fiber finish and also carries the defogger switch for the rear windscreen, Mahindra has omitted the rear wash and wipe feature even on the top end D6 trim. 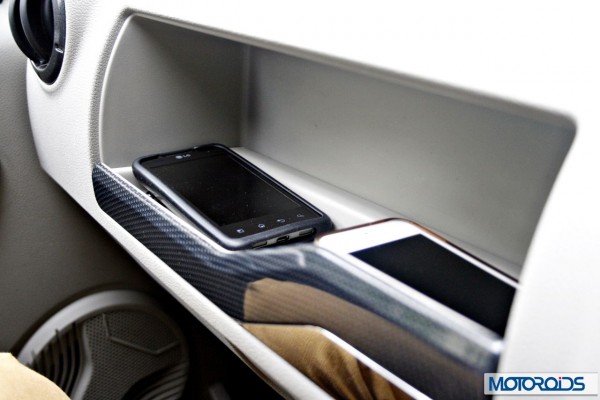 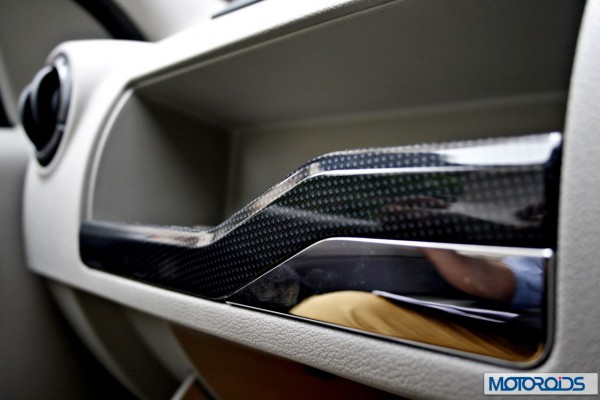 The dashboard carries a recess for stowing away things with black and silver accents while the grab handles which house the power window switches are sturdy and chunky enough to be used on SUVs! The seats on the Vibe are spacious like the cabin and offer decent support however some more bolstering is definitely desirable and lack of height adjust do not affect the driving position much. 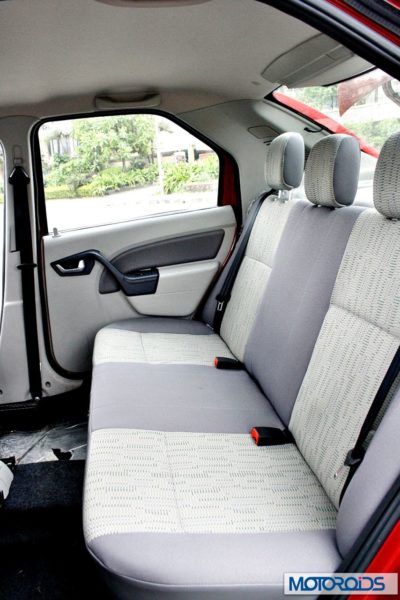 The rear passengers are kept happy with acres of space to sprawl and stretch, a third passenger is more than welcome thanks to the 1420mm of shoulder room. The D6 version came with electrically adjustable wing mirrors. The steering retains the dark tone while the looking-through-it silver-ringed clocks in the instrument panel are clear and easy to read. Amber lit single LCD multifunction display gives away information like average fuel consumption, trip meters, distance to empty etc., which can be toggled using the press button on the wiper stalk lever placed on the right like the European cars. 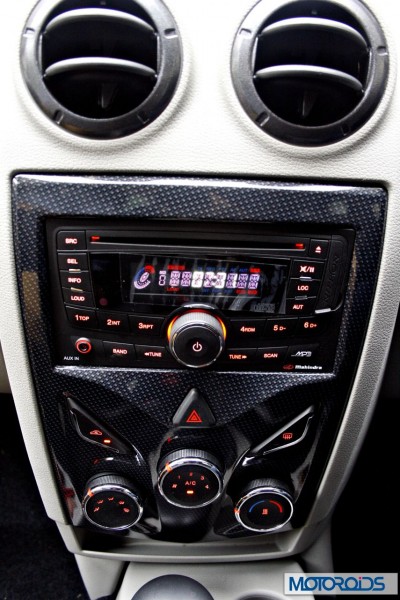 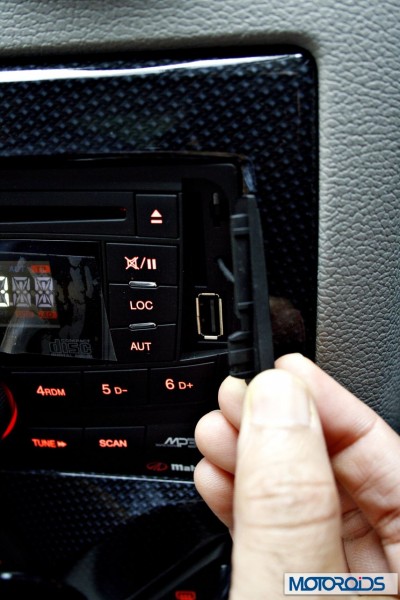 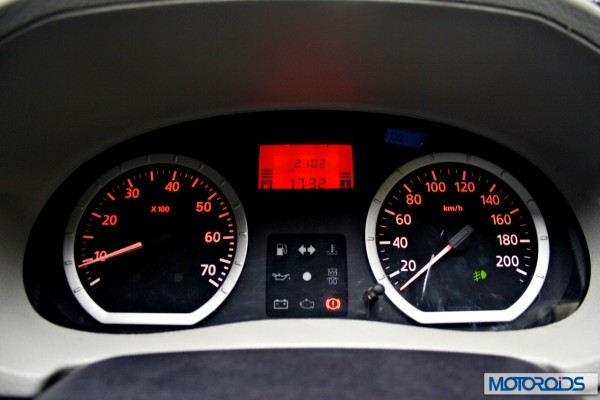 The central console provides three cubby holes which are big enough for disposable cups only. The door pads carry map pockets and are devoid of any fabric inserts unlike the ruling trend. Thus the interiors are nothing to shout about especially due to lower quality plastic parts around, the cabin space and comfort however gets our thumbs up!

Next page for Engine, Ride and Handling >>> 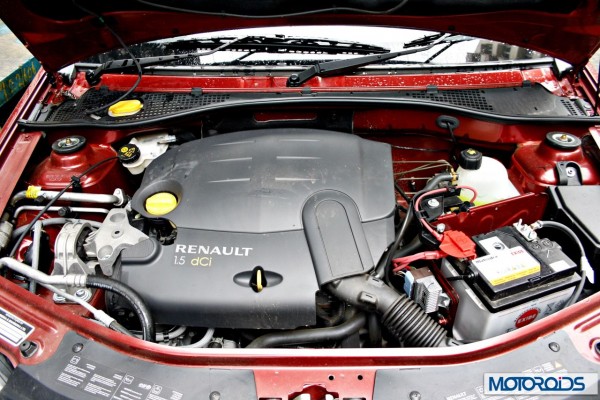 While there is nothing “sporty” about these figures to get the adrenaline pumping, the Vibe is pleasant to drive around thanks to low end torque which kicks in right from the tickover at 1000+ rpm and doesn’t tail off until about 3000-3500rpm.The linear power delivery makes the Vibe a brisk drive and coupled with a light action progressive clutch and equally effortless gearbox, it is never a chore to drive in traffic. 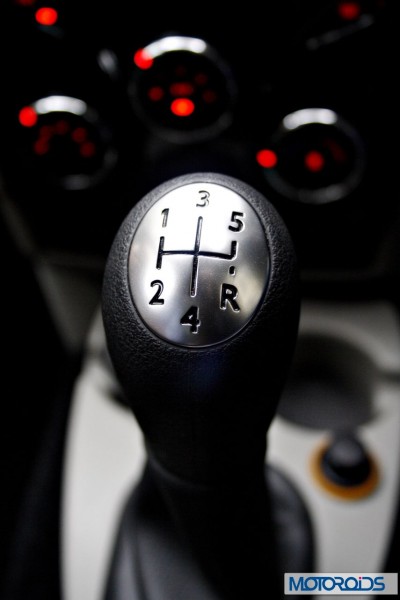 The gearbox slots with fair amount of precision though feels a wee bit notchy however is fun to use due to its short shift action. The gear ratios on the Vibe are more suited to city driving than high speed cruising on the highways. The steering on the contrary feels a tad heavy at low speeds but provides enough feedback as speed builds up. 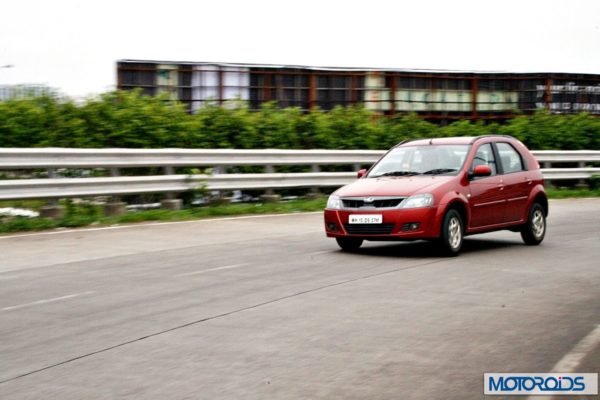 The Logan`s ride quality was its hallmark and Mahindra have done the best to retain the fantastic well cushioned driving dynamics on the Vibe. Bad roads are never a bother, 172mm of ground clearance and the 185/70 R14 Tubeless JK Vectras further filter out minor ruts and ridges without a hint to its occupants. Ride quality is one of the absolute highlights of the Vibe, not just in its own segment, but across segments. 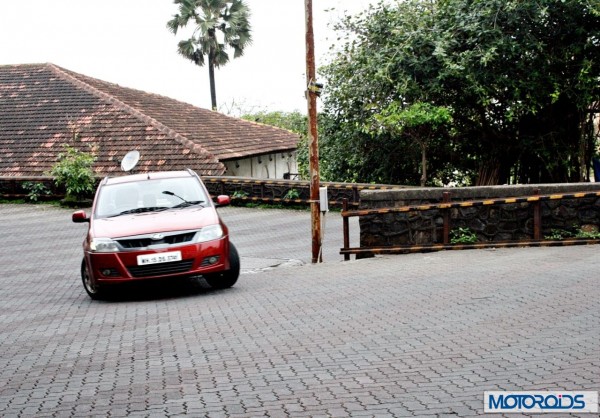 Though Mahindra claims it as a Sporty compact sedan, it is evident that the Vibe does not have an appetite for twisty roads. The well sprung Vibe is best suited to be driven around moderately, any attempts to push it too hard around bends highlights the body roll with the tail stepping out promptly, that said it always remains confidence inspiring and predictable. 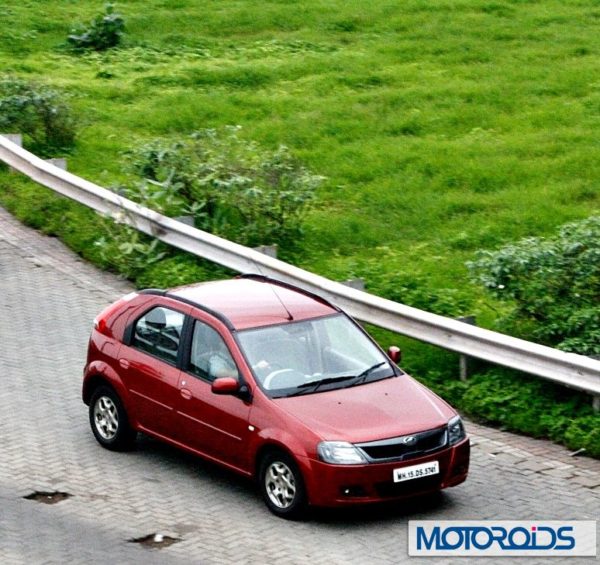 The NVH levels of this oil burner are impressively low and the engine only sounds thrashy if revved hard beyond 3000 rpm. This frugal Renault sourced power plant returned us a figure or 14.6 kmpl with mixed driving cycle which a typical user can expect within the city, taking it on the highways it will returned a no complaints 16.2kmpl while shifting around 2000-2300 rpm when the engine is in its merry state. Overall, this makes the Vibe a pleasant car to drive around while being easy on the wallet.

Next Page for Conclusion, Price and Tech Specs>>>

Summing it up / Price 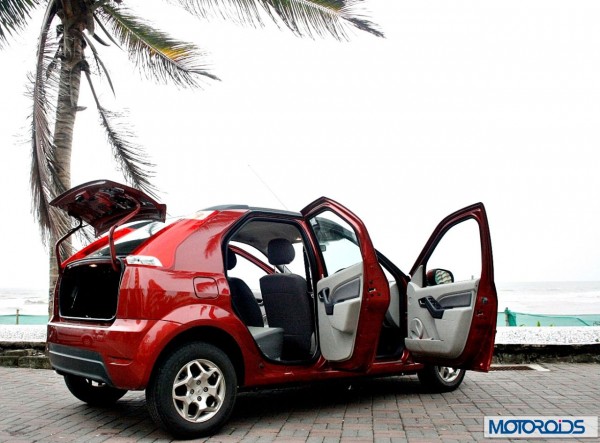 The trend started by the Indigo eCS has caught up with most of the manufacturers, and Mahindra too has decided to make hay while the sun shines. The Vibe offers the practicality of a hatchback, space and comfort of a sedan. Cleverly kitted, the Vibe does miss out on few features like the rear wash and wipe, height adjustable seats, split folding rear seats to name a few however considering the price at which it is offered (6,49,473/- ex- showroom Mumbai w/o Octroi for 1.5 D6) makes it a sensible purchase. One can’t go wrong with the Vibe, if practicality, comfort, fuel efficiency are the deciding factors, the Vibe is for you!

Next Page for Image Gallery>>>