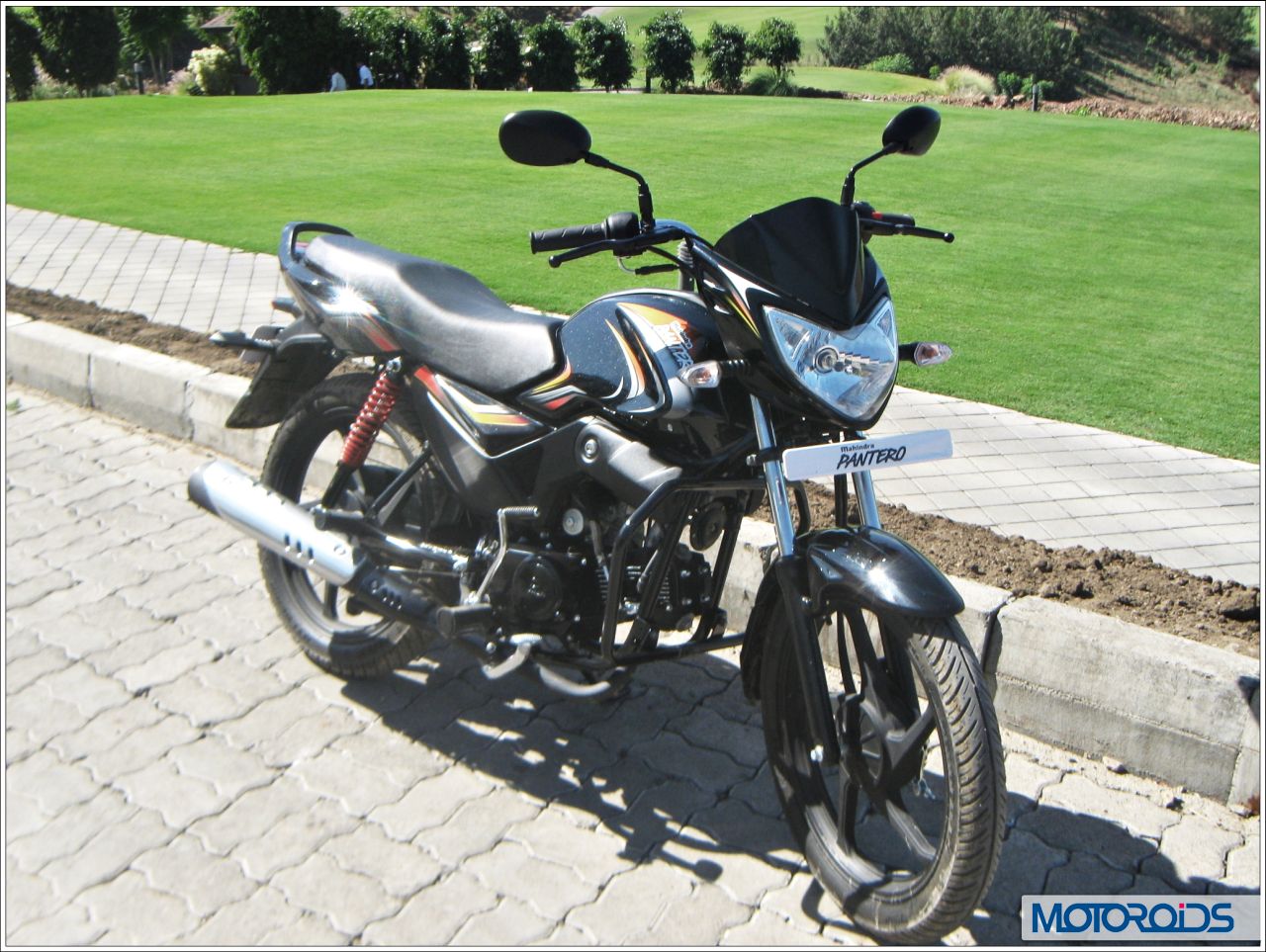 Before we get to the usual business with the Pantero 110 review, let us give you a little backgrounder on Mahindra Two-wheelers. Some years back, the Mahindra group, probably not satisfied with segment leading sales in UV market, decided to enter the rapidly growing Indian two wheelers industry. Mahindra took over the realms of ailing Kinetic two wheelers and hence, came up with its two-wheeler division- Mahindra Two Wheelers.

Mahindra Two Wheelers commenced their innings with an assortment of Kinetic and Kinetic-SYM scooters that have been bringing some sales to the new bike manufacturer.

Mahindra Two Wheelers was quick to recognize that there is much more to our bike market than the gearless scooter segment. Soon enough, it came up with a new commuter bike that was to battle it out against the highly popular Hero Splendor and Passion. Christened as the Mahindra Stallio, the bike was marred by some flaws and hence, compelled the manufacturer to pull it out of the market.

Not the one to be demoralized, Mahindra has now unveiled a new entry level commuter bike that will be soon launched in the highly competitive commuter segment. 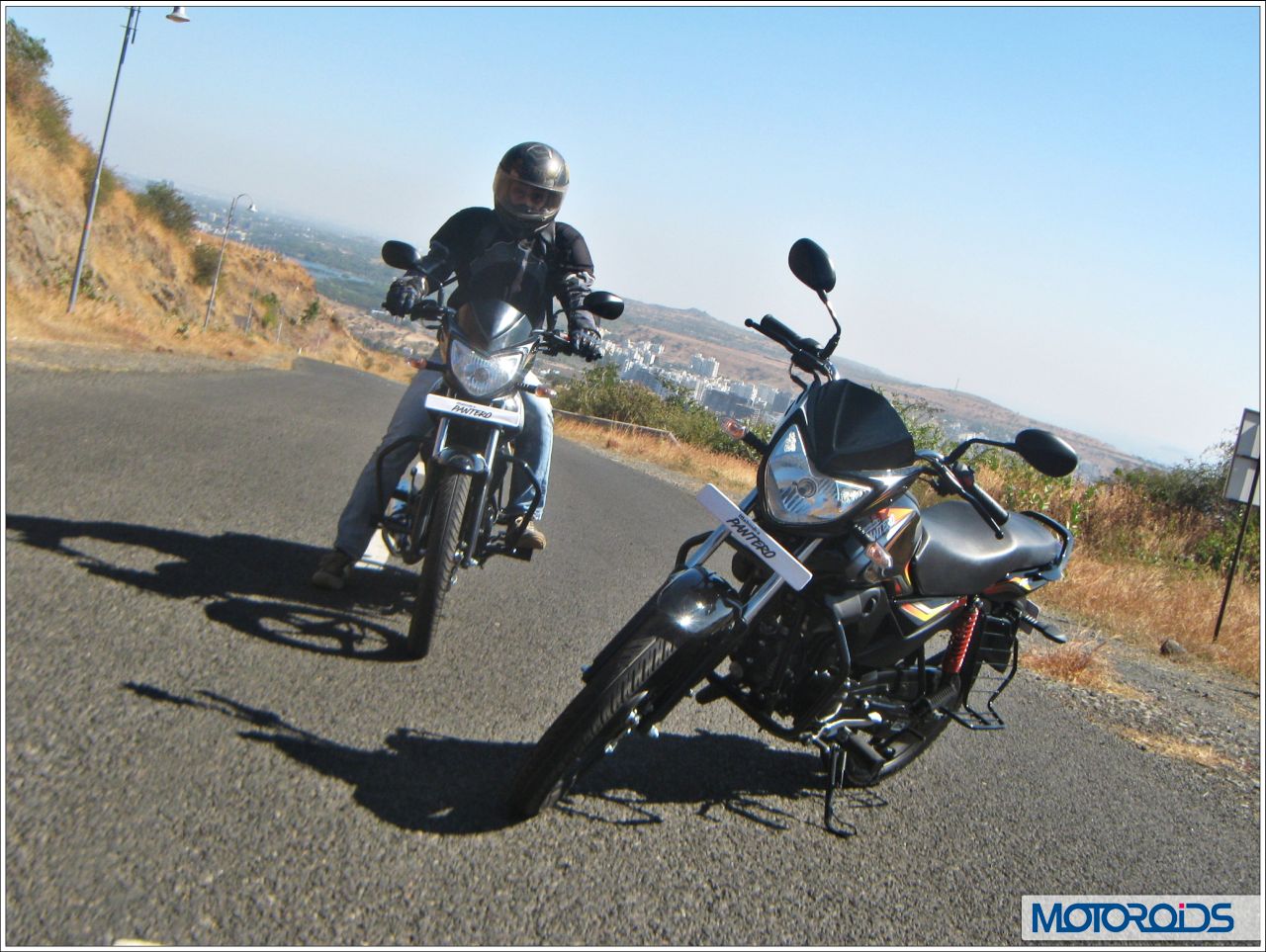 Christened as the Pantero 110, the first of the two upcoming Mahindra bikes is an econo- commuter with which Mahindra plans to take on the likes of Hero Splendor & Passion duo. The Pantero 110, however, comes with some ‘first-in-class’ features and is powered by a 110cc engine to have an edge over the 100cc rivals. 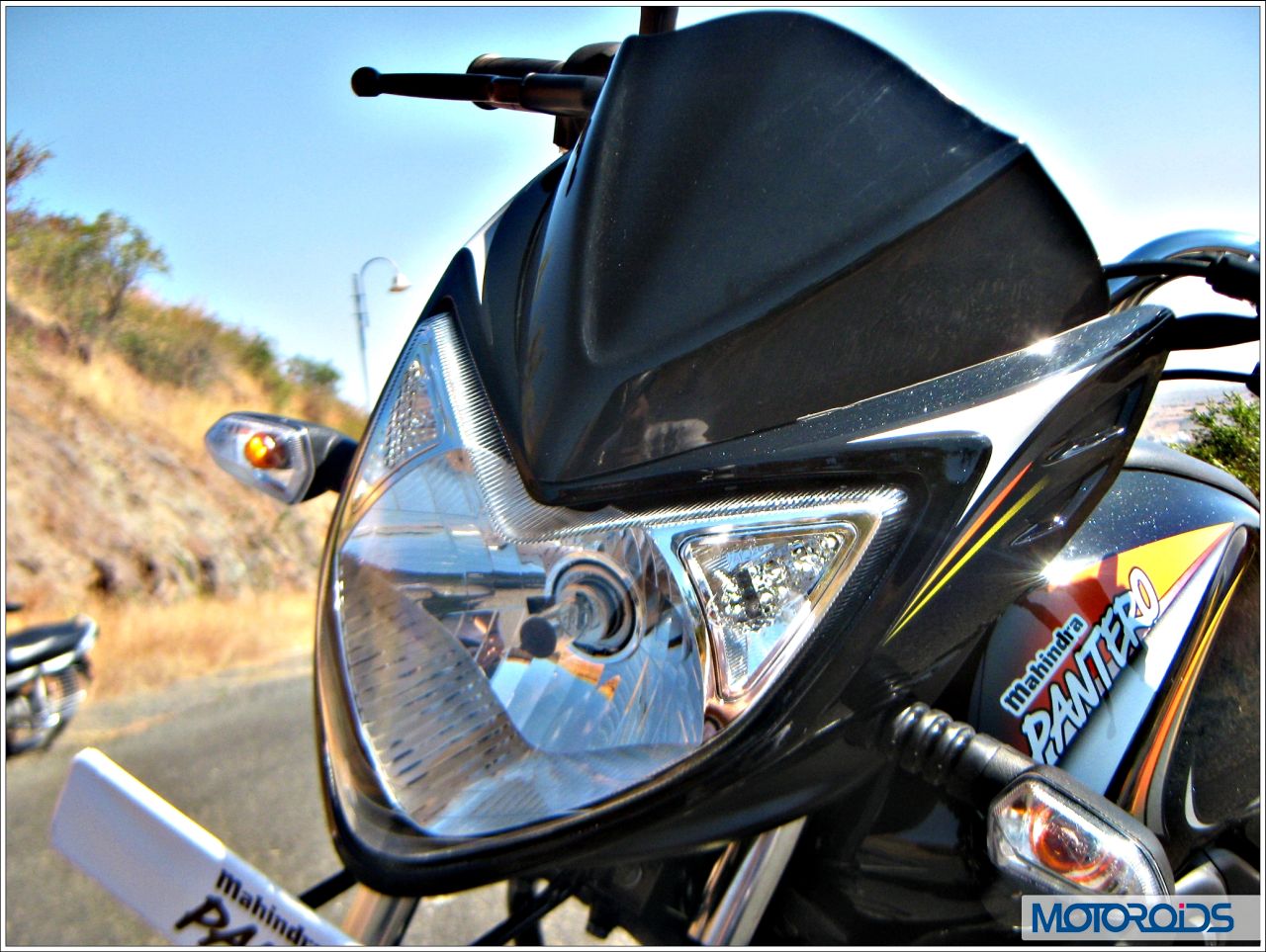 The Mahindra Pantero 110 looks like most other bikes in its category and doesn’t have anything radical to write home about. However, it may be noted that the Pantero caters to the entry level bike market and barring the Honda CB-Twister, which has always impressed us with its styling, looks as stylish as any other entry level motorcycle.

The Pantero has a bikini fairing that is distinctively reminiscent of that of the erstwhile Stallio. The bike’s fairing houses a pair of LED pilot lamps that Mahindra feels would be a USP of the new bike.

Moving to the side, the bike will come with alloy wheels in most of the variants and features black painted mechanical parts. The tail pipe gets a chrome plated heat shield and rear shockers come draped in a shade of red. The new Mahindra bike also gets some snazzy graphics that run from the tank to the rear panels. 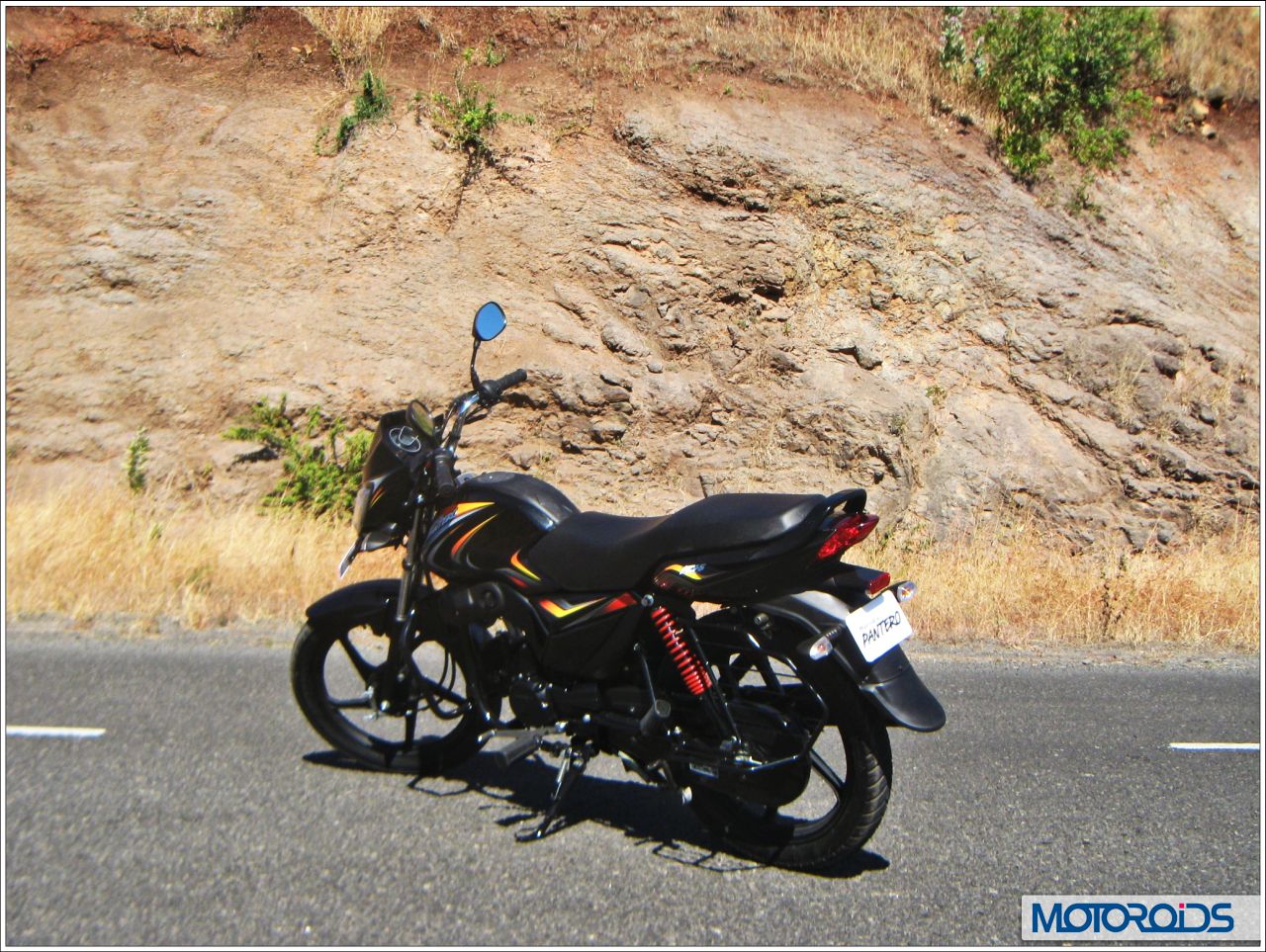 On the tank, the Pantero features an aircraft-type fuel filler cap that is generally found in more expensive bikes. Another neat feature is the plastic strip that works as a tank pad and will prevent belt buckles from scratching the metal. It does look rather ungainly though.

Back at the rear, the Pantero sports an LED tail lamp that looks pretty upmarket. The bike gets clear lens blinkers and combined with the black grab rail, the rear end manages to have a fresh and chic look.

The Pantero is equipped with a digital tachometer and speedometer combo that is borrowed from the Rodeo gearless scooter and helps the bike in scoring a few brownie points over its immediate rivals.

Mahindra has played it safe with the Pantero’s styling. However, the Pantero 110 is surely among the better looking bikes in its segment. 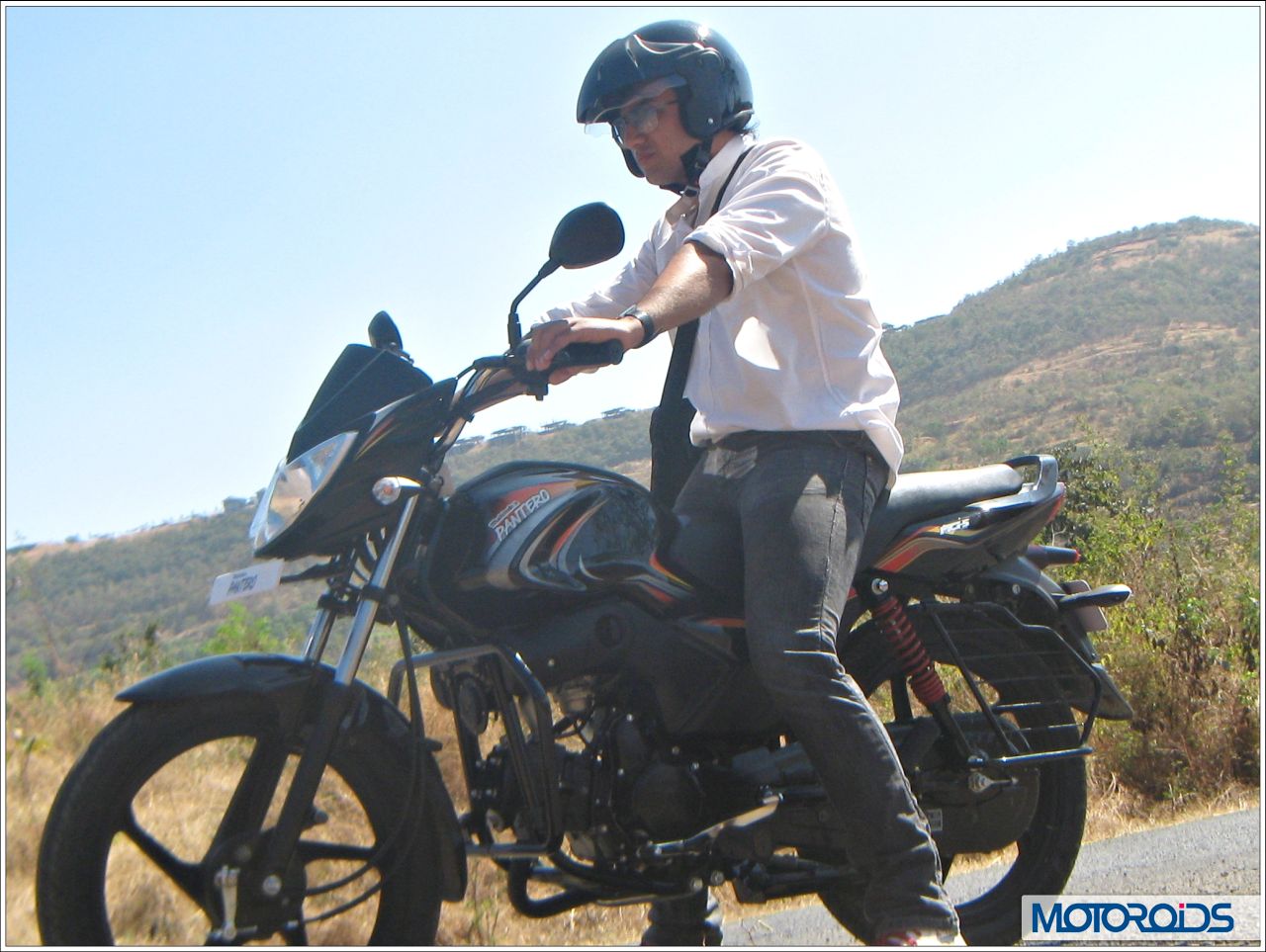 The Mahindra Pantero 110 is a strict commuter and doesn’t boast of any sporty aspirations to speak of. Hence, it is only natural for the bike to offer a commuter-ish riding posture. The rider sits very upright on the well cushioned seat and with knees properly recessed on the side of fuel tank. Speaking of the seat, Mahindra claims that the Pantero’s seat is the longest in its class and we have no intentions of doubting them. We do however wonder as to how much the fact will help in enhancing comfort, as the seat length of most of the bike is good enough. Seating three? We don’t think so! 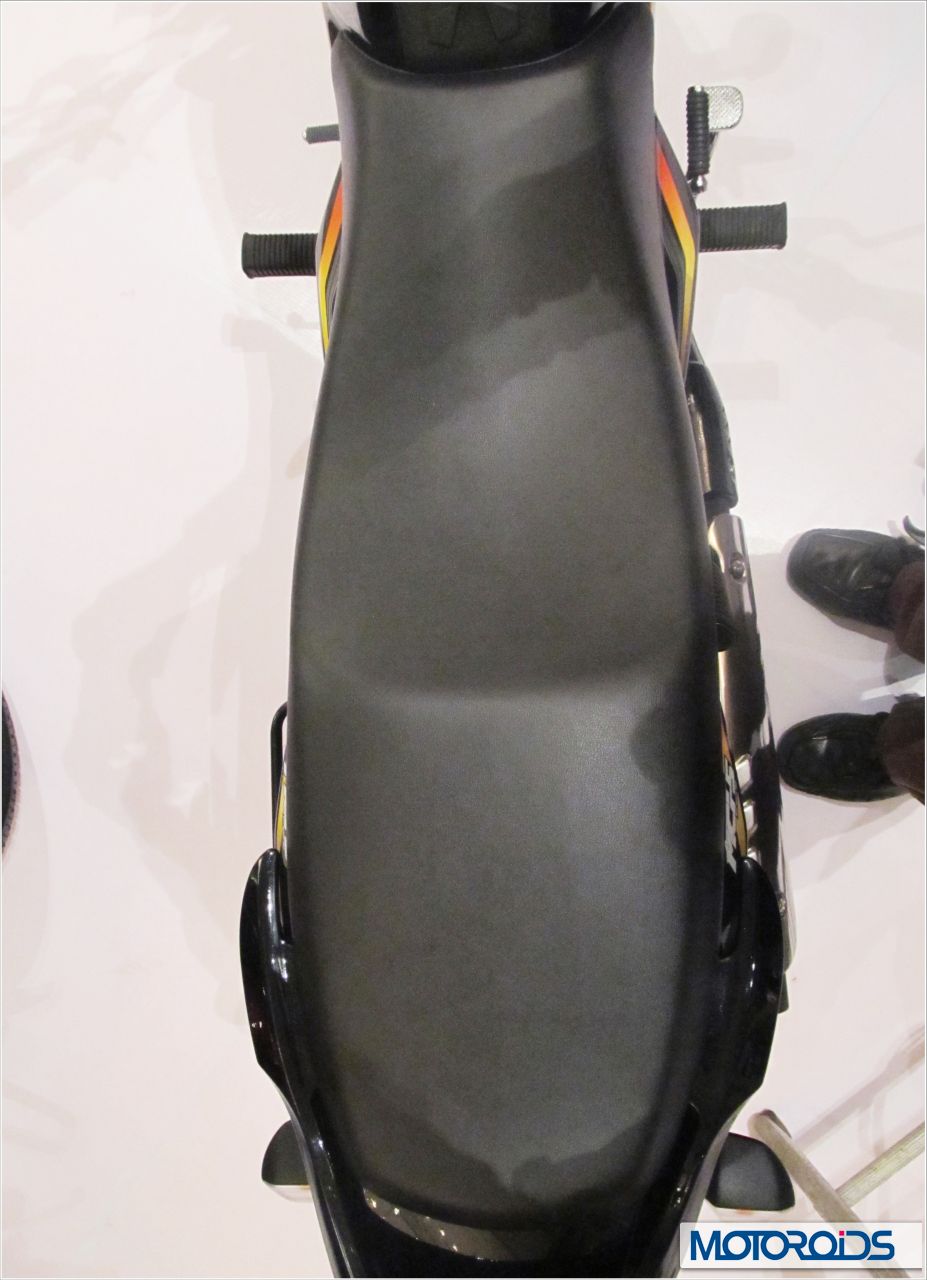 As with every other bike in its segment, the Pantero comes with a commuter oriented handlebar that complements the upright seating posture pretty well. The handles come with a rubberized grip of a very good quality material, which we feel is a neat touch.

One of our favorite bits is the conveniently placed choke lever that allows the rider to engage/disengage choke without taking the hands off the accelerator. 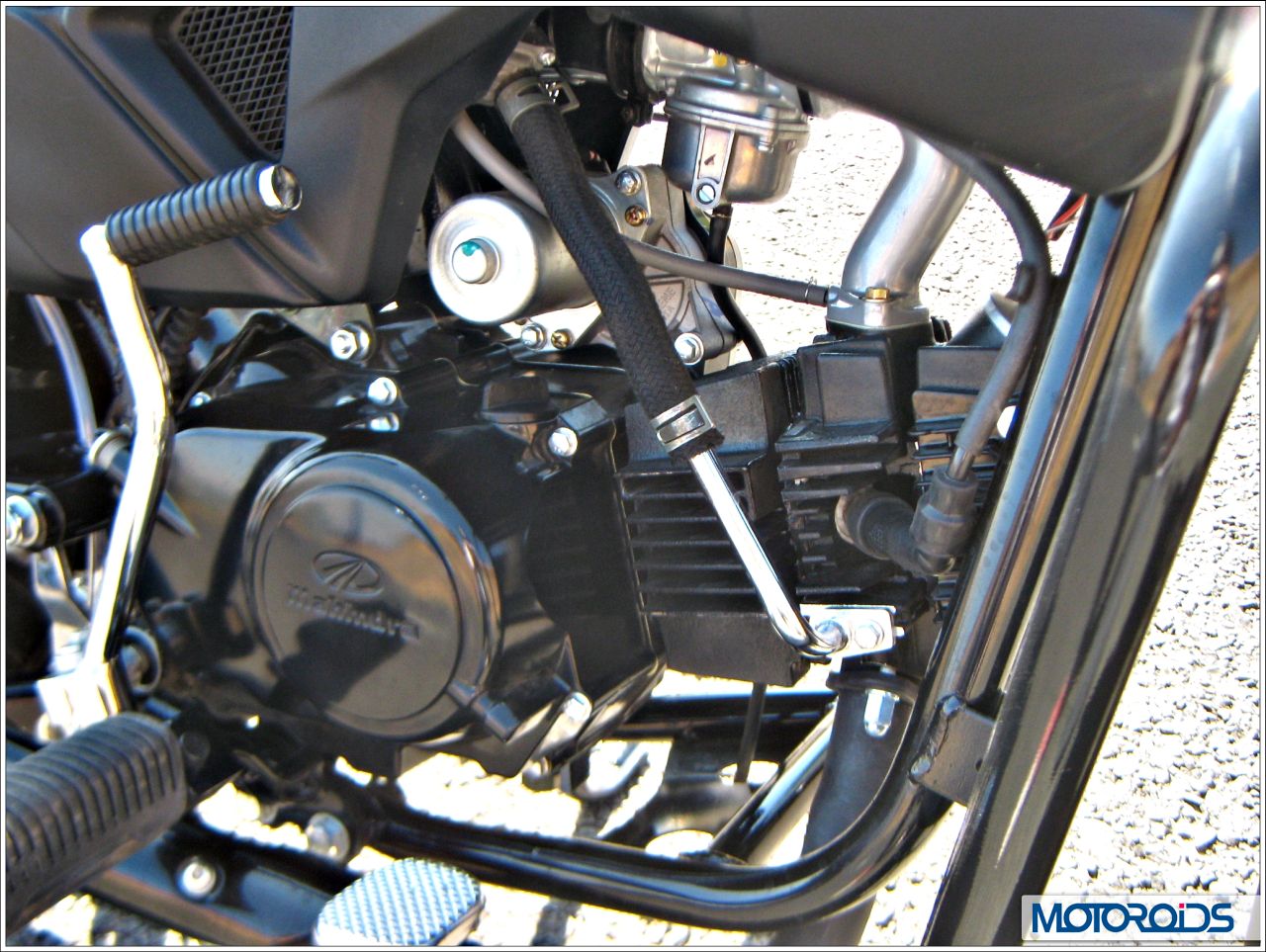 Powering the new Mahindra Pantero 110 is an ‘in-house’ designed MCi-5, 110cc, single cylinder engine that is mated to a 4 speed gearbox. The motor is good for a peak power output of 8.6PS and has been developed with benchmarking the 100cc single cylinder engine from Hero. The ARAI Fuel Eefficiency for the Pantero is 79.4kmpl and the bike is a second quicker to 60kmph than its immediate rival, the Hero Motocorp Passion.

The engine sure is grunty and the bike is surprisingly quick off the block. Shifting between the gears is pretty smooth, with no clanky sounds or notchy feeling. There aren’t any false neutrals either. However, head north of 5000RPM and the motor starts to complain of the hard work it is putting in. Anywhere between 6-8k and it is showing quite a lot of unease staying there. This is surely an area Mahindra would like to look at. The engine is, otherwise, pretty vibe-free in practical rpm range between 3-5 k and would make for a good companion in our ‘stop-go’ traffic.

Mahindra needs to address the vibes in high RPM. 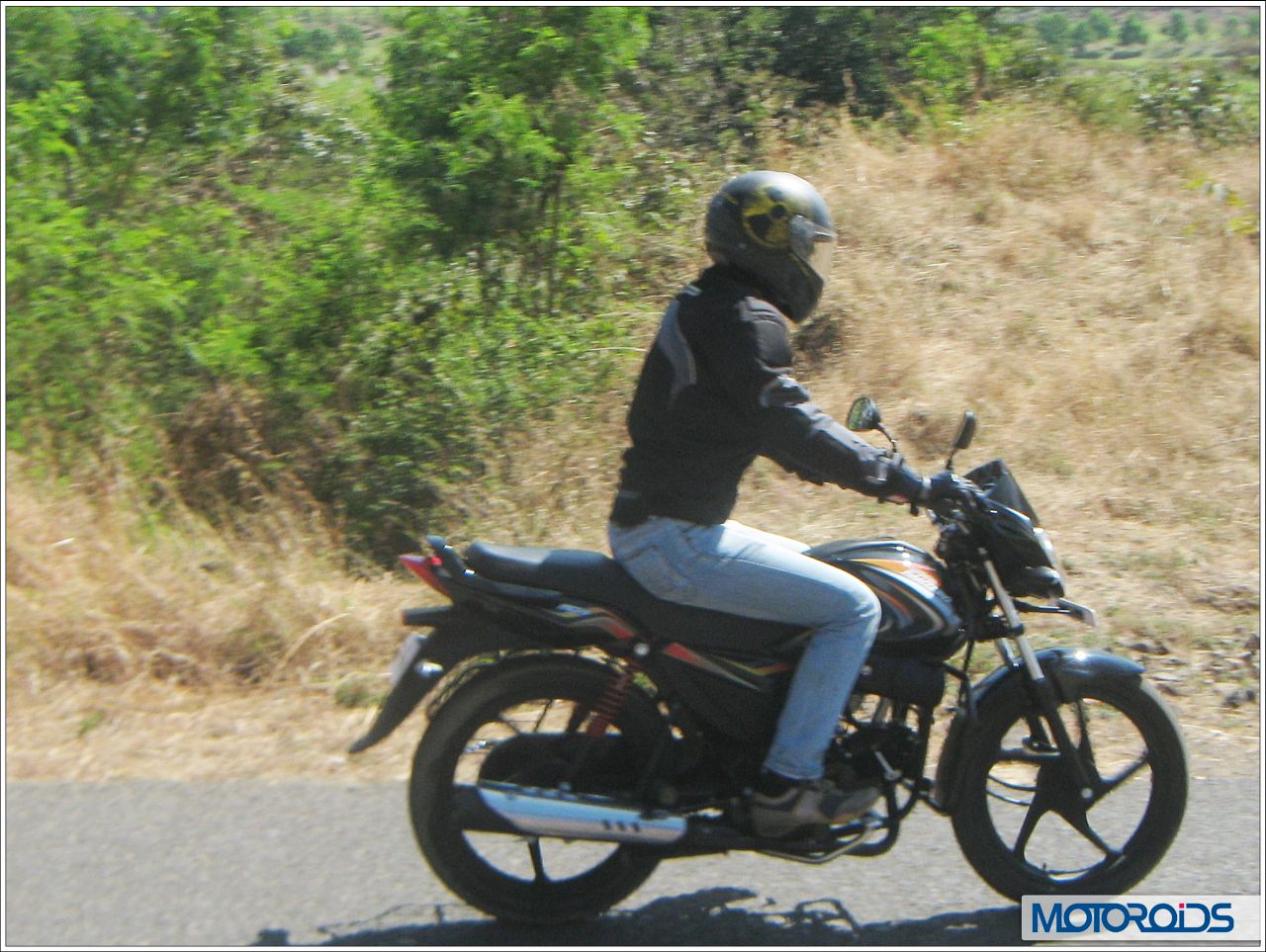 The Pantero comes with a traditional suspension layout of telescopic forks up front and twin absorbers at the rear. The new Mahindra steed boasts of good ride quality with suspension easily absorbing most of the undulations our roads are famous for. There really isn’t anything to complain about the Pantero’s suspension as regards ride quality. The suspension, combined with the comfortable seat, should make for comfortable city commutes for most of the users.

Like we mentioned above, the Pantero has no sporty aspirations and comes across as a strict commuting bike. Even so, it is pretty nimble for cutting through the slow moving traffic and has a good weight distribution to make the dash to the office rather easy.

For city riding, the Pantero offers good ride & handling but please look elsewhere if you intend to play Casey Stoner and go apex hunting. Keep your expectations reasonable, and don’t expect this basic machine to give you any thrills around the twisties. 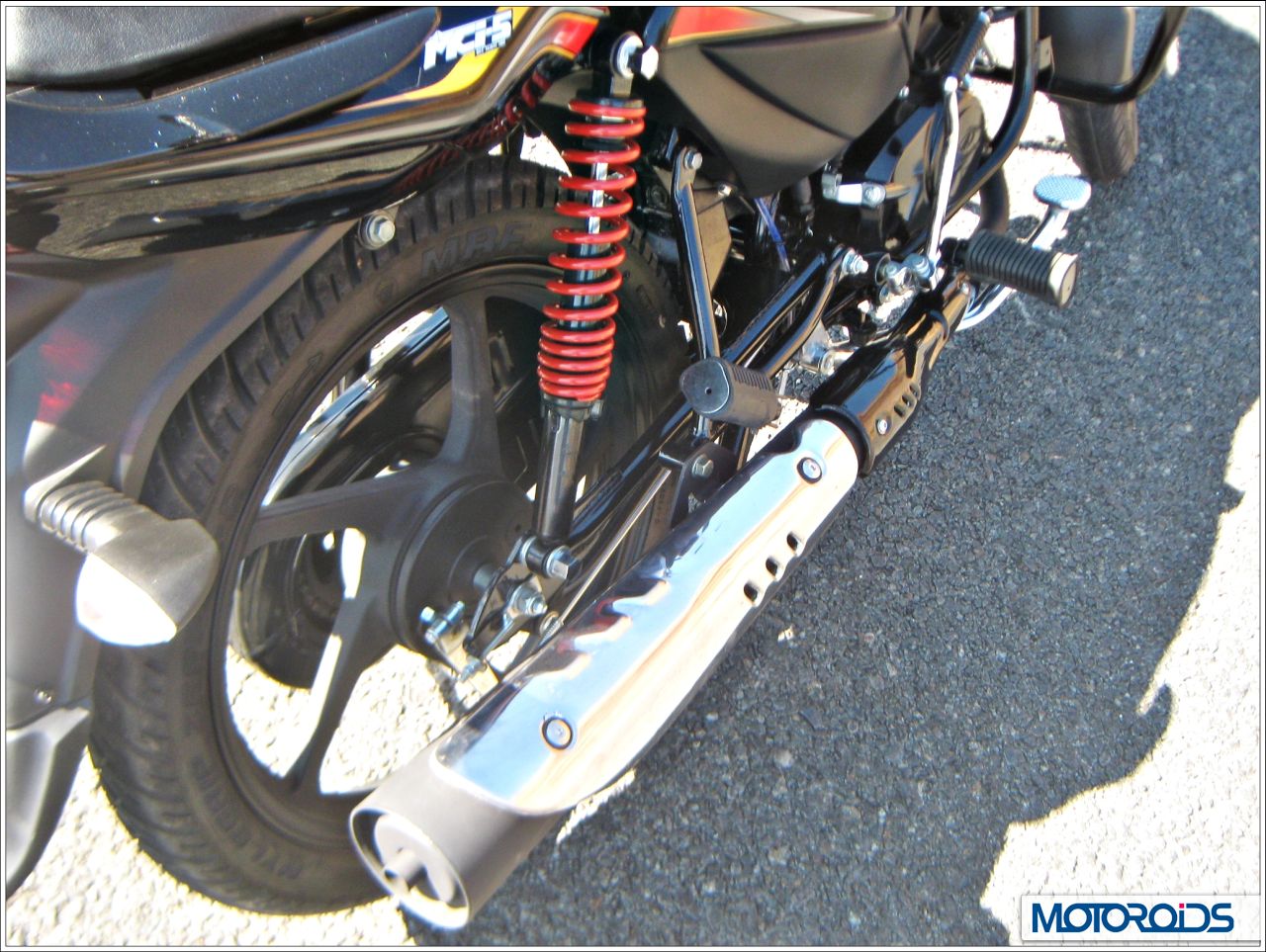 The Pantero is equipped with drum brakes on both the wheels and the bite from both the brakes is adequate for hauling you down low to medium speeds. If, however, you’re one of those riders who prefer riding at speeds above 60km/h even through the city traffic, then the Pantero’s reins won’t probably be able to bring it to a halt assuredly. A disc brake isn’t even an option, and we honestly believe that the inclusion would have helped the bike.  Mahindra can certainly do a world of good to this machine by coming up with a disc brake variant.

A commuter but a good one at that. Good ride quality and decent handling for cutting through the traffic. We need a ‘disc’ though. 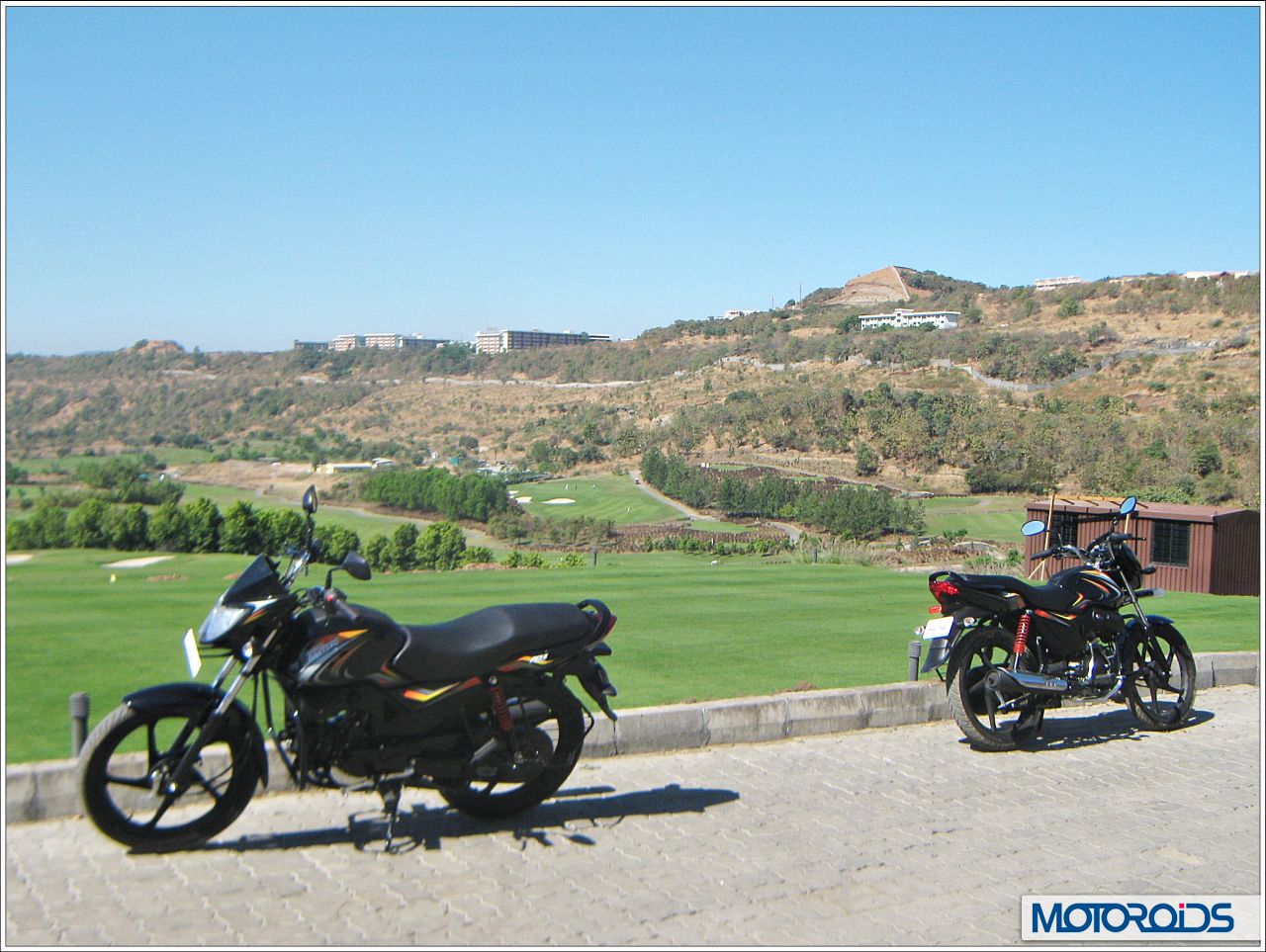 The Pantero, which is Mahindra’s second attempt in this segment, comes across as a good effort. The bike has all the virtues of being a fine commuter motorcycle and does not have any serious flaw to speak of. The engine vibes above 6000 rpm can be a bit of bother for some, but Pantero is hugely improved product as compared to its predecessor. There sure are areas which could be improved, but the Pantero, even in its current form is at par with more established rivals and has what it takes to give them a good fight.