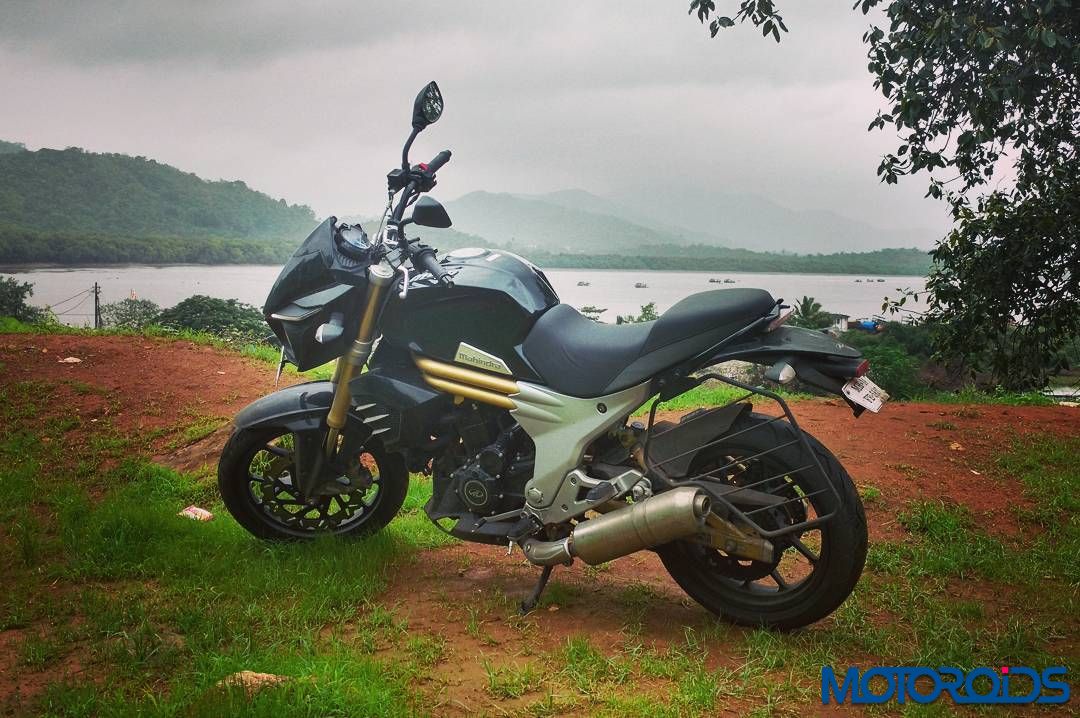 A home grown brand popular for its butch SUVs, Mahindra & Mahindra took quite some time testing the Mojo before it was launched in the Indian market in October last year. While at Motoroids we had the opportunity to review the motorcycle during the media drive on the scenic Bangalore-Madekeri highway, we’ve had the machine as a part of our long term fleet and we’ve grown rather fond of it. Our first long term report of the bike was in the early hundred kilometers of the bike with us, and included a trip to the foggy hills of Lonavala. Here’s our second report, after having logged a thousand more kilometers and covering more details.

Having heard from my colleague about the Mojo after he had the opportunity to ride it for 600 km at a stretch, I was intrigued to find out what Mahindra flagship two wheeler’ had in store. With Luck in my favour, I received the keys to the Mojo about a month ago even as the monsoon showers tried their bit to deter me from riding it. At the first glance, I was fascinated by the sheer size and presence of the motorcycle. It was only after carefully climbing on to the saddle of this bulky 300cc brute, having been impressed by its visual girth, that I could appreciate the way it masks its heavy 165 kg (dry) weight in practice. 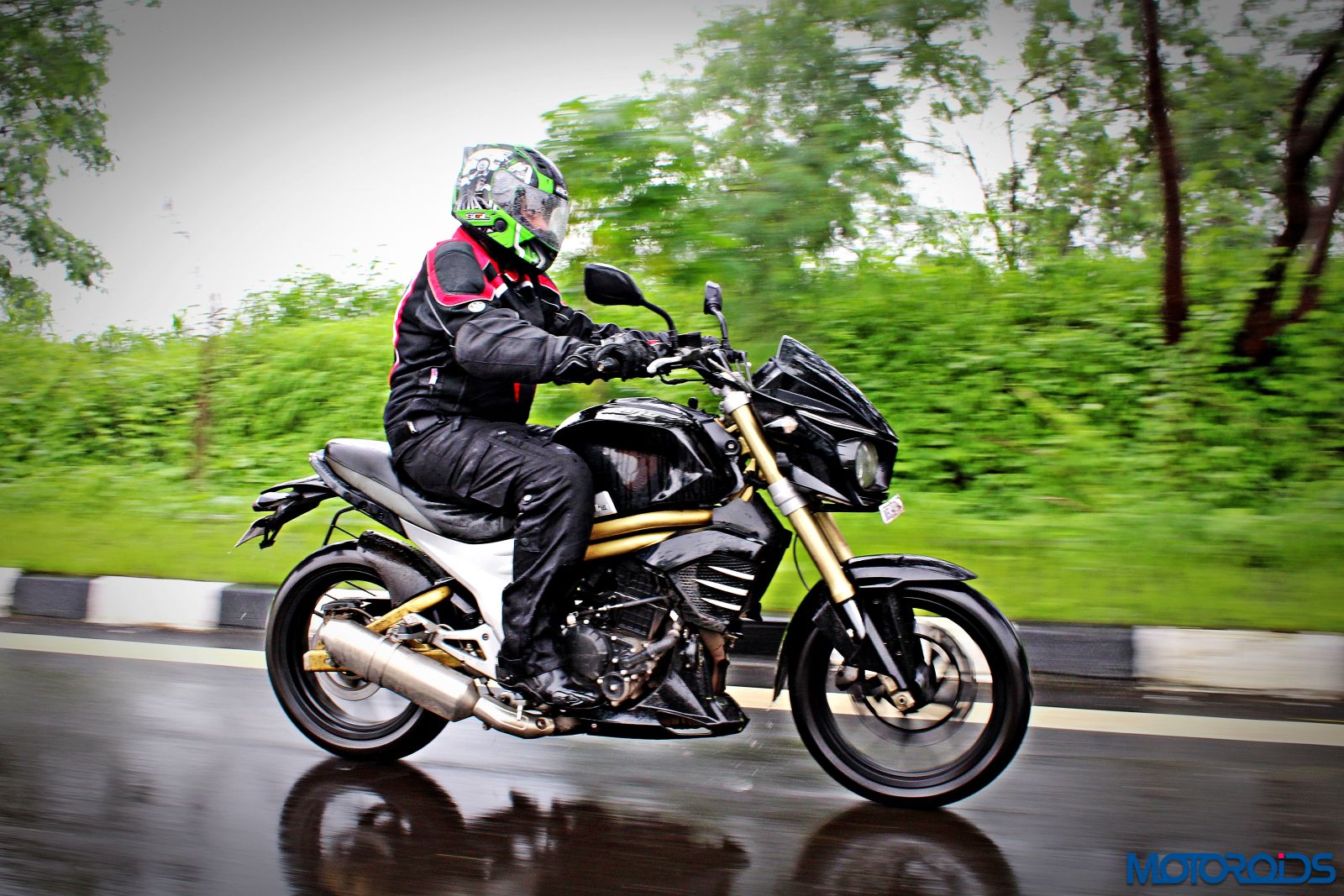 Aesthetically, the Mojo, in my view, has the ability to draw attention by virtue of its sheer size. In pictures, those twin pod headlamps might look a bit odd, but in the flesh, the Mojo has the presence to rise head and shoulders above other motorcycles of its ilk and stand out. It catches the attention of kids and adults alike. The headlamps emit a respectable quality of light good enough for highway runs without necessarily needing to depend on the high beam. Don’t let the Mojo’s wide eyebrows fool you, for what seem to be LED DRL are regular pilot lamps. The LED tail lamp also look quite attractive, especially when viewed post sunset.

Something that caught my attention midway was the lack of a crash guard up-front and a rather small seat for the pillion rider. Even the most petite of my friends found it lacking in acreage. The big, muscular styling of the motorcycle does suit my heavy frame though, and I couldn’t care less about the occasional back seaters who occupy the perch for some very short distances. 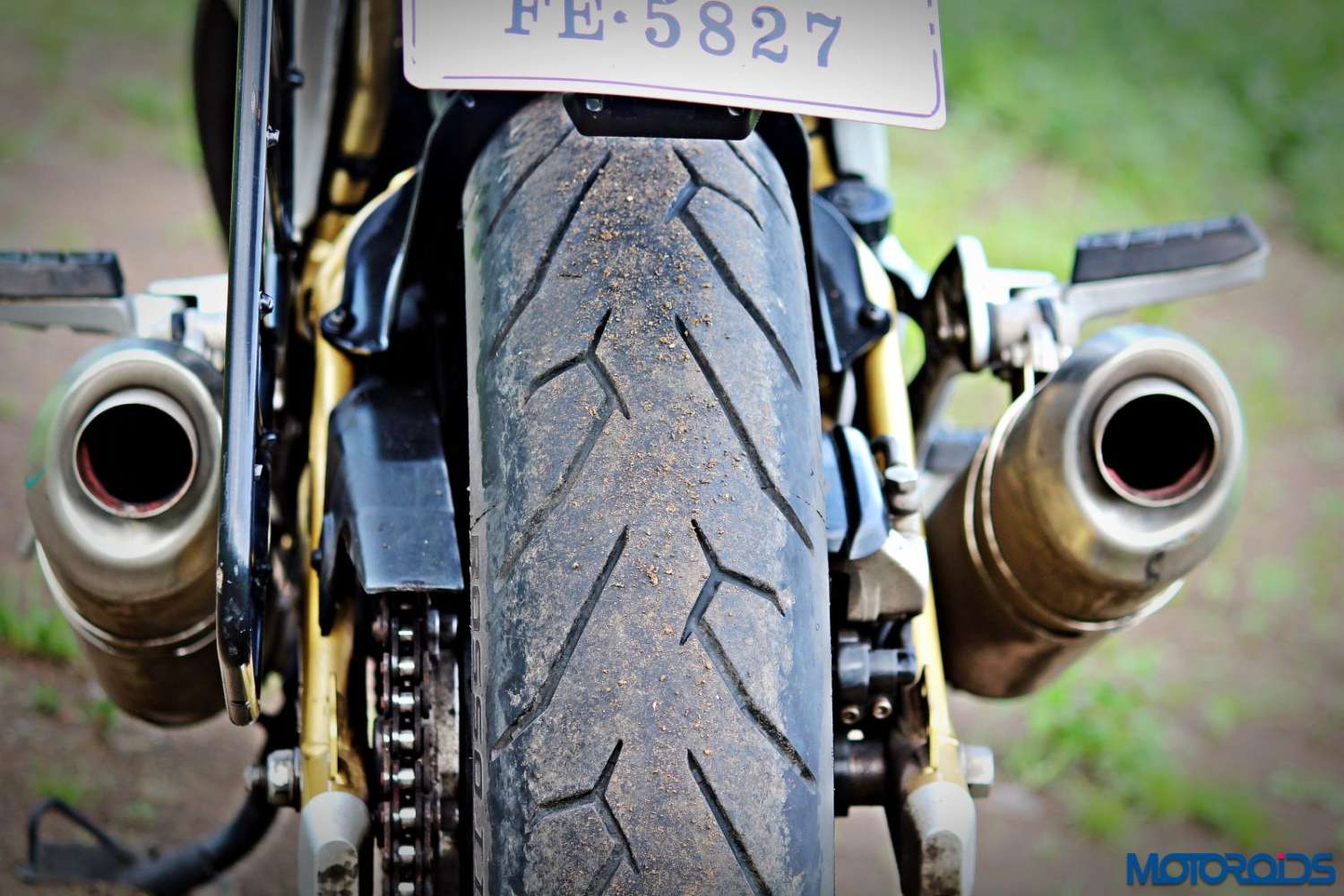 Ride quality is comfortable, and the Mojo wouldn’t get unsettled by anything less than a typical Mumbai street crater. While it isn’t one of the most lightweight or flickable machines out there, show it a sweeping corner and the Mojo goes around it briskly and merrily, courtesy a sorted chassis and the utterly reliable Pirelli Diablo Rosso II rubber. The Mojo also comes equipped with a comparatively loud horn that is bound to make the jaywalkers aware of your approach well in advance. 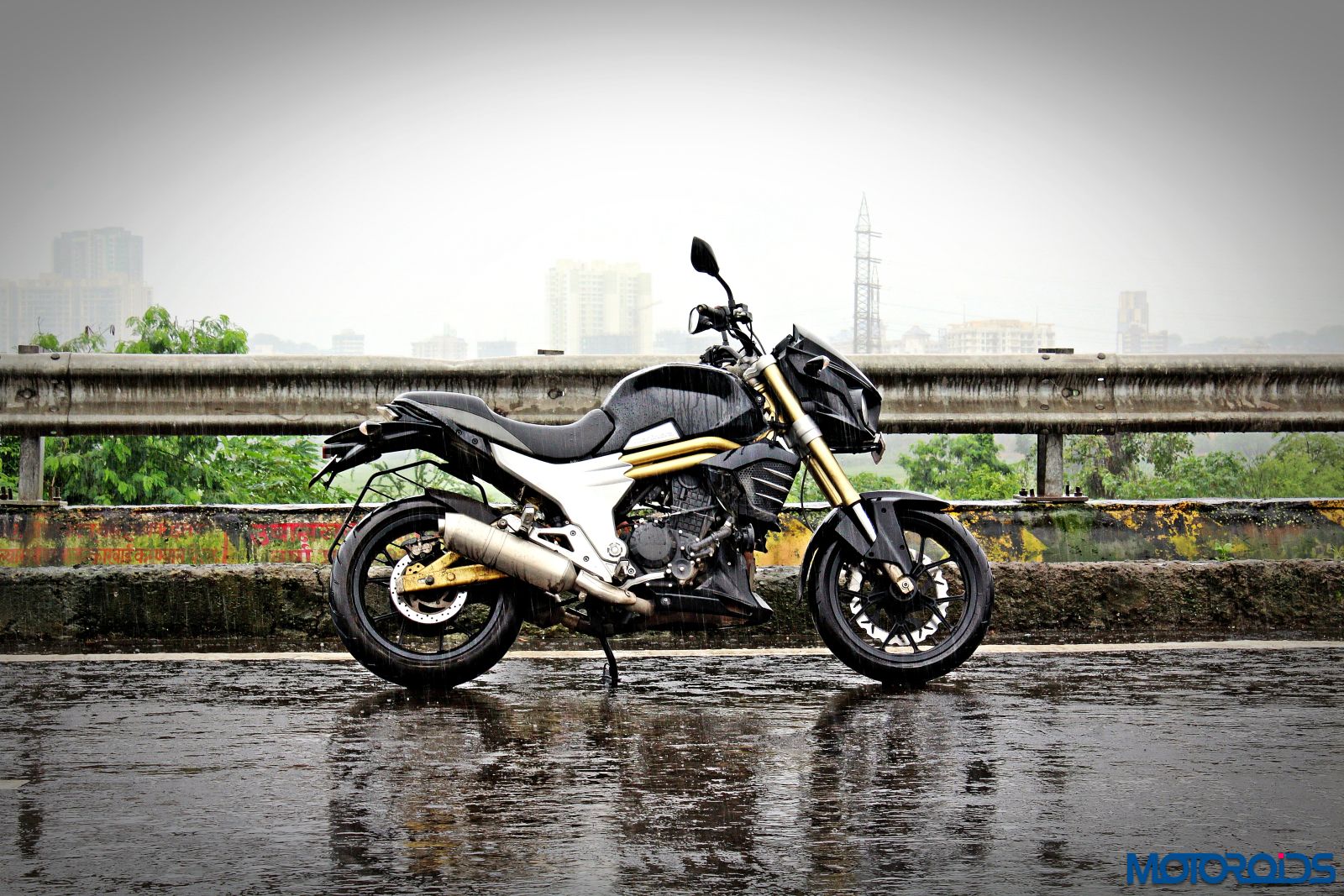 The 300cc engine on the Mojo has its own unique character and is quite unlike any other mill out there. The meaty mid-range torque kicks in after 5000 clicks, you would just want to ride that wave of  twist for as long as you could. The NVH levels are pretty impressive too as you don’t feel any vibrations on the foot pegs or anywhere else for that matter till you approach the upper echelons of the engine speed at about 8500 rpm. Hustling the Mojo in the higher rev band for prolonged periods does make your legs feel some of its fury though.

The brakes have the bite, except that the front level needs a bit more squeezing than ideal. The dual exhaust system has to be one of the best features of this bike, with the roars and grunts egging you on to ride her harder. The pops and crackles make an appearance every once in a while as you roll down on throttle from high revs. Sure it’s not a supersport to give you the goose bumps, but those sounds from the un-ignited fuel most definitely work towards igniting your love for this motorcycle that wee bit more. 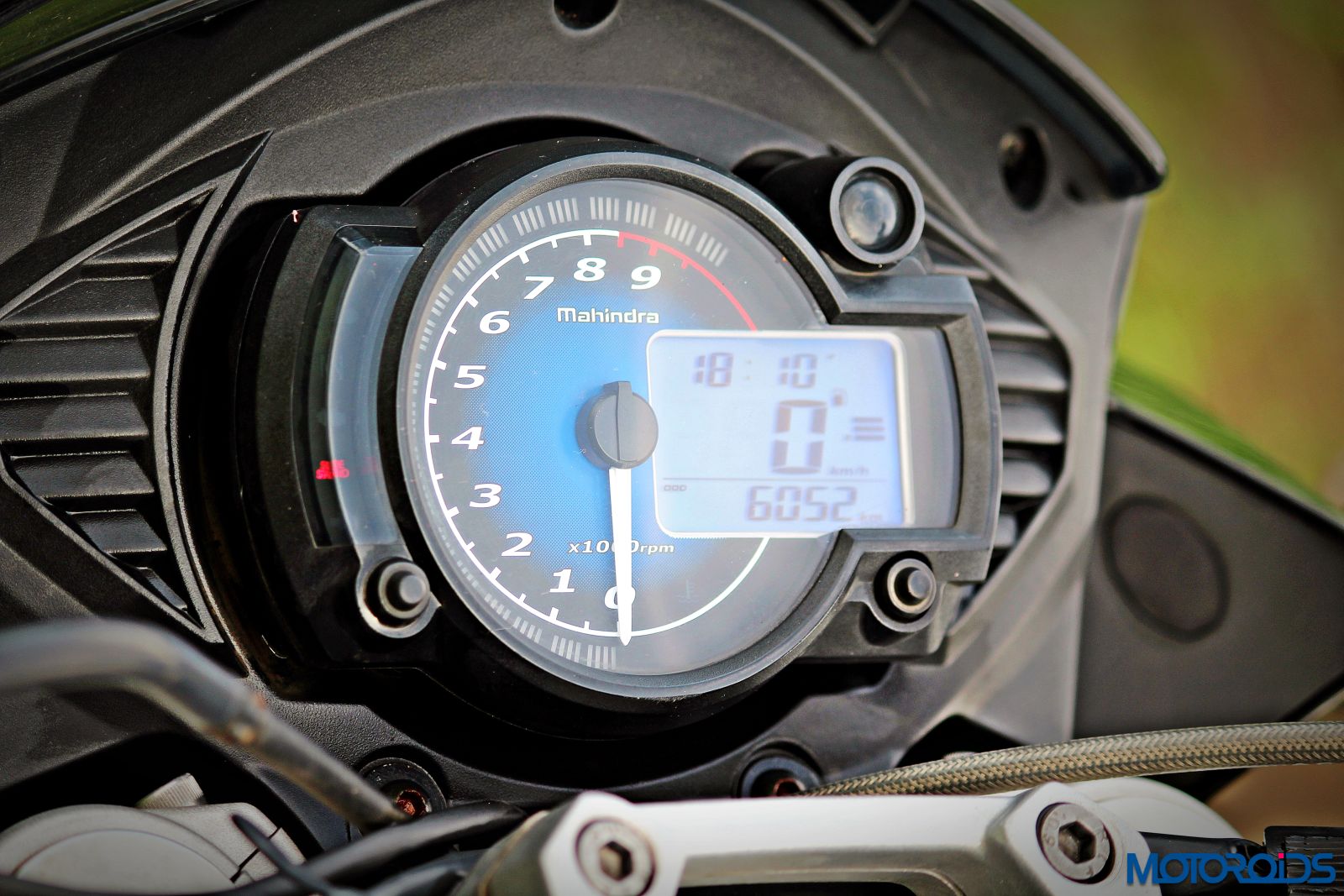 The Mojo, as whole has held together well, though there are a few things we’d like to mention here. The side stand became loose a few days back, though we had it duly tightened as soon as we noticed it. The fuel gauge is another bit that’s been acting erratically of late, with the meter showing inconsistent readings every now and then. Fuel economy has been reasonable for the Mojo, a decent 30 kmpl being the average, courtesy my liking to hit the mid rev range at every chance I get.

It’s been a content journey for me with the Mojo, and after having ridden it for a few thousand kilometers, I feel it’s time to send it back to the service center for rejuvenation. Meanwhile, have a look at some details about the bike through images and captions : 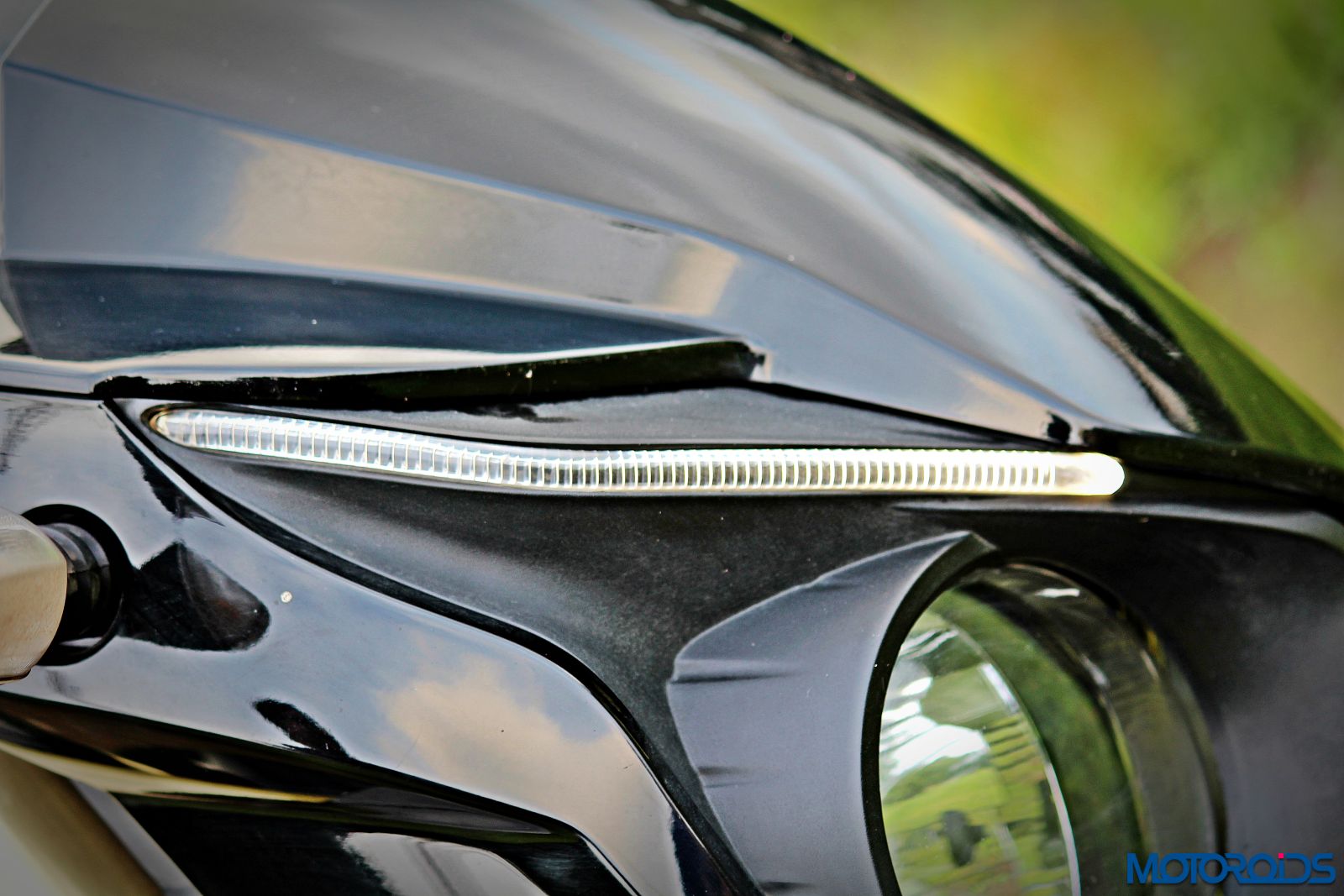 LED DRLs? Nope! Those are the Mojo’s pilot lamps 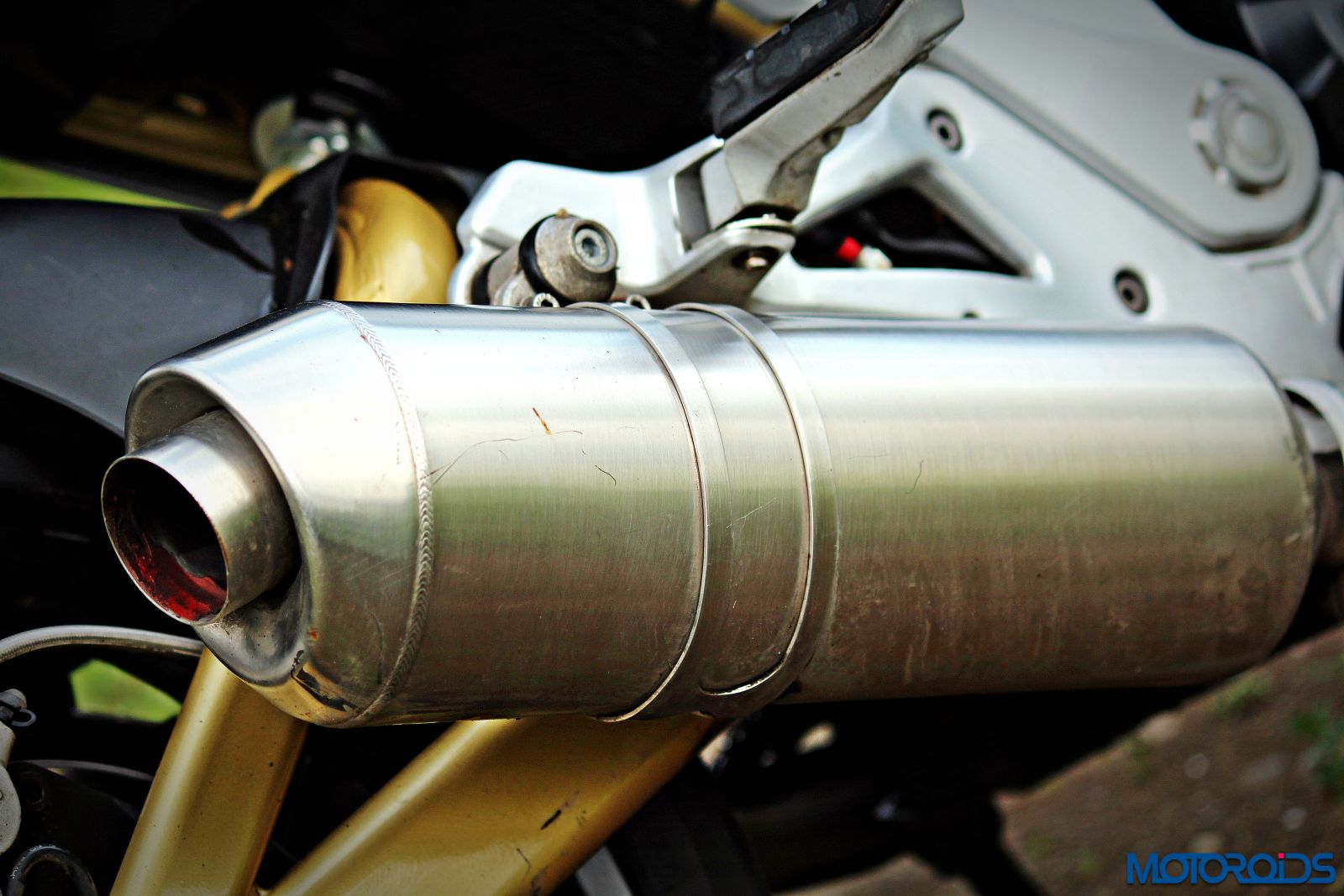 One of the best exhaust systems in its segment with a throaty, muscular note 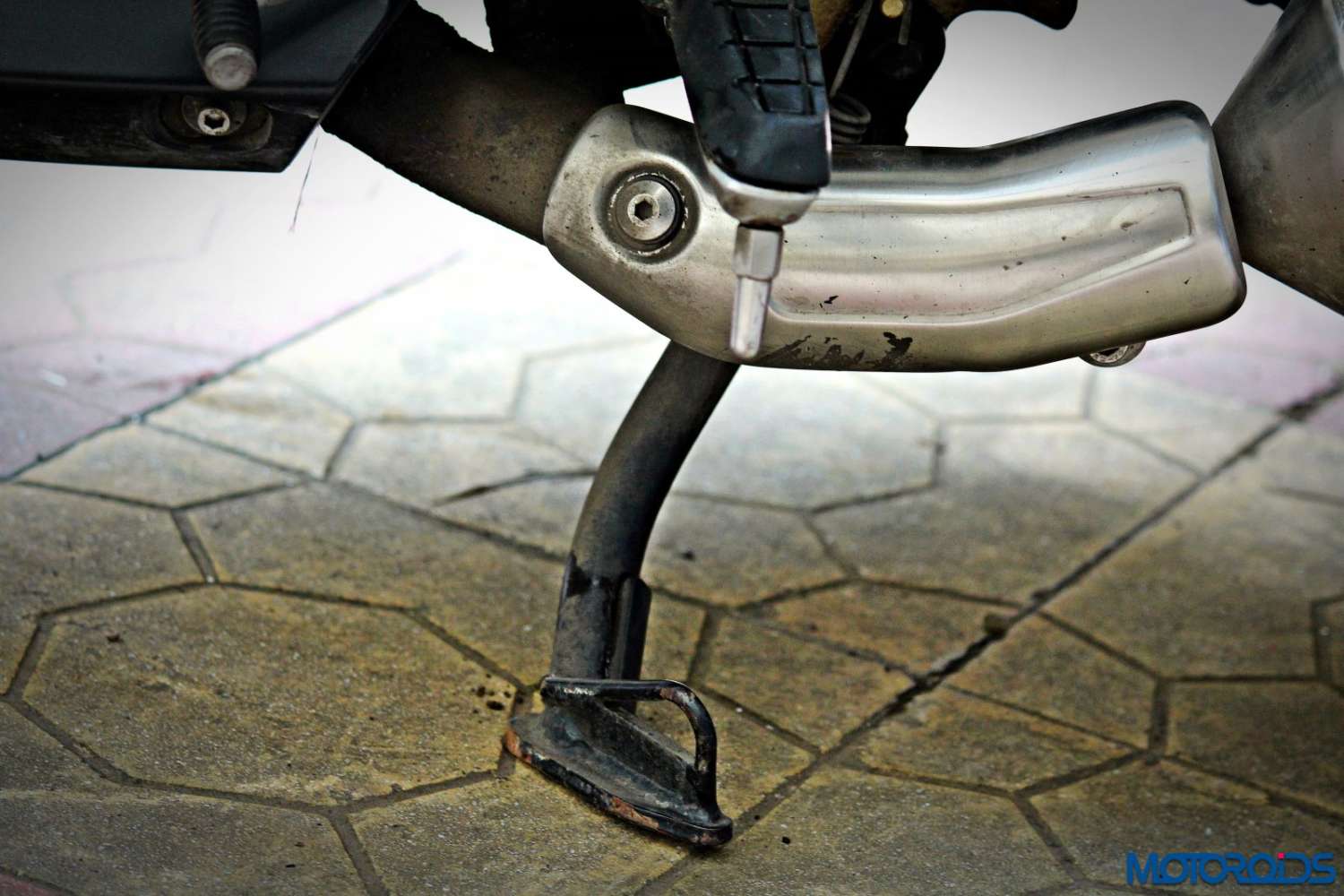 The side stand has loosened up a while back, but was duly fixed in no time 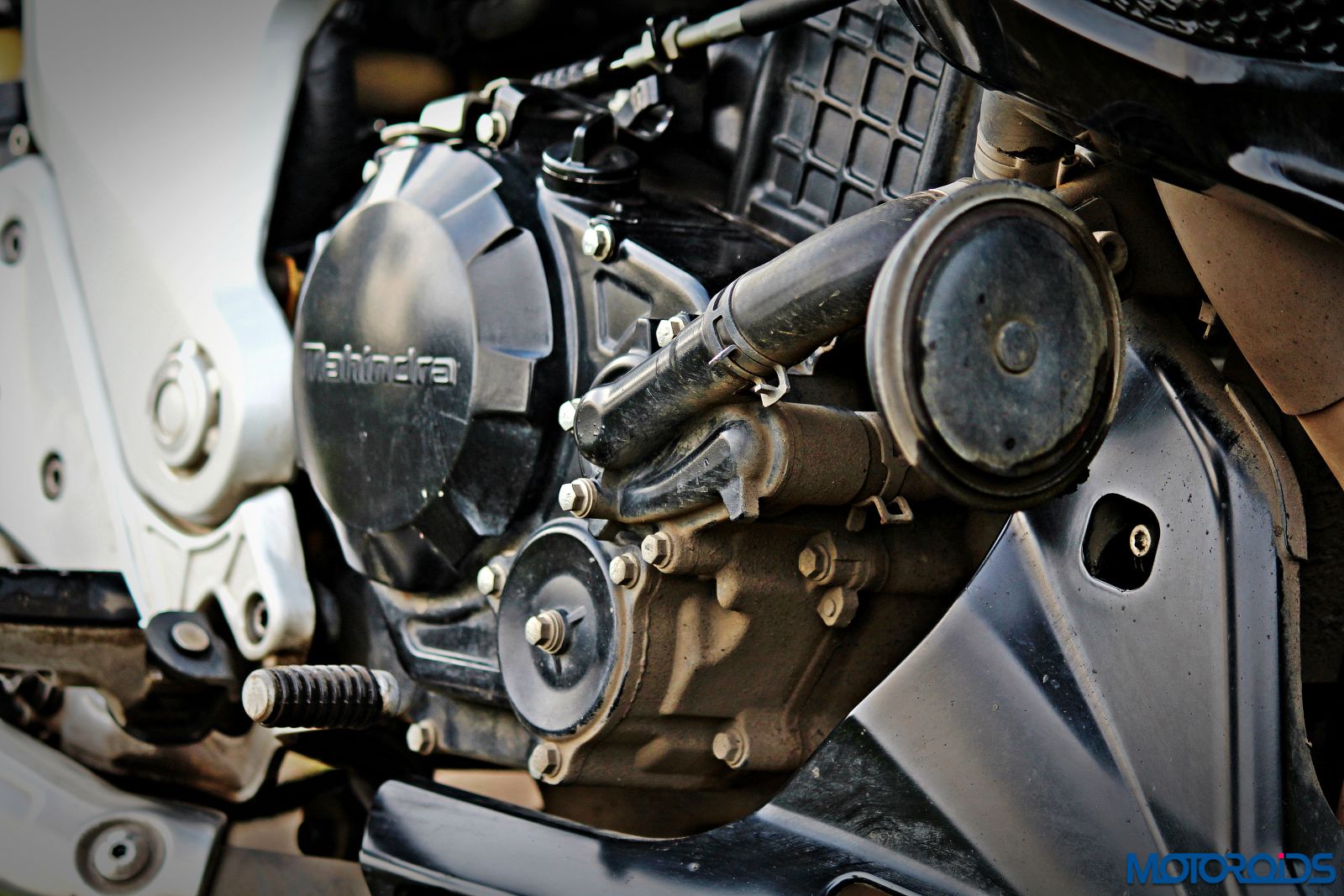 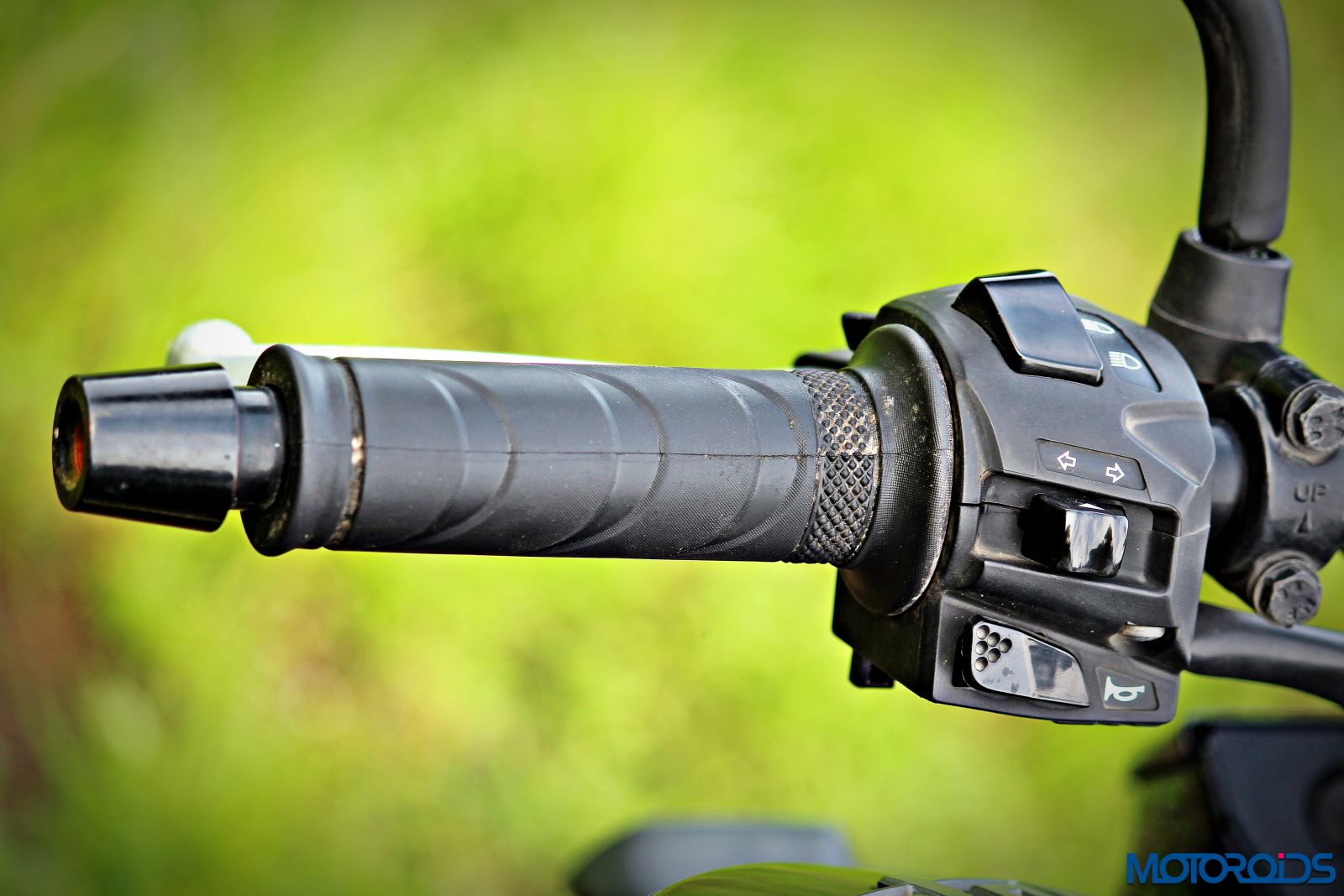 Build quality on the bike is quite commendable