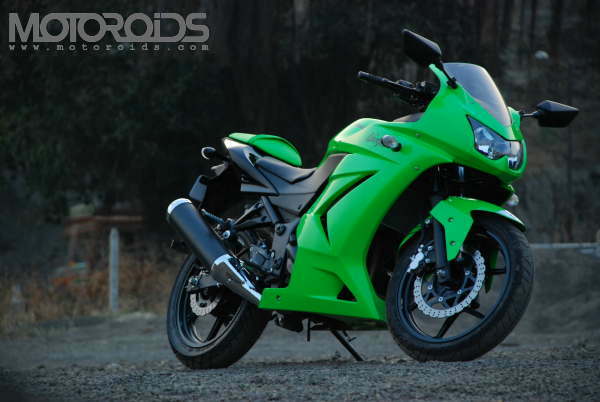 I still remember the day when the bike was launched. I was super excited about the bike as it was going to hit the showroom and when I saw it for the very first time I knew, that I needed to get the baby Ninja added to my stable. Ever since, there has been no looking back for me in the world of biking. Here’s my report on the bike’s behavior till now.

1)      Let’s begin with the engine. I must say the engine is awesome and very rev happy. It’s not stressed even when it comes to hitting the rev-limiter. Though the engine screams a little once you cross the 8000rpm mark but as the engine gets older it becomes smoother, especially once you cross the 5000km on the odometer. The only unusual noise comes from the engine’s “Cam Chains” which sounds really sweet!

2)      Handling wise, it’s just awesome. Nothing has changed so far though. The bike is behaving the way it should since the purchase, though I would have wished the bike had low clip-ons and rear-set foot pegs to make it a little more sporty and racing oriented (but it’s something one can do with aftermarket mods).

3)      Tyres are one of the most important factors for any sporty bike. Here’s my two-cents on the subject.

IN DRY CONDTIONS: The Stock IRC Rx-01 Road winner’s are really good. The front 110 does a really good Job in making the bike stable around the corners. Along with that, it really inspires confidence in the rider.

IN WET CONDTIONS!! : Well the story somewhat completely changes. The tyres are totally pathetic on wet surfaces. There is no such thing as traction on any corner or even on simple turns. Sure on a straight it has good grip but that’s not how one can really judge the tyres grip. So my advices to all the owners of the 250R would be to avoid long rides during rains! Or if you are caught up riding please be extra careful. A small crash recently cleared all my doubts about the tyres’ grip. I would like to share my experience with you. At first I believed that the bike had softer compounds, for when I got the bike I was told that these tyres have a life of 12,000kms. But unfortunately I was mistaken. I found that these tyres are Touring Tyres. They are not soft compounds ones.

Now back to the crash – this is what exactly happened! I was coming back from a Long ride with my friends and we were passing through a ghat section. While riding uphill there was a simple right hander. So while talking the turn with the least lean angle one could possibly do, I lost my front all of a sudden and it ended up as a low side.

Thankfully nothing major happened as I was quite slow (around 40kmph) and was wearing my full riding gear so no Injuries.  Final conclusion on IRC-RX01: great in dry, bad on wet!
Page 1 of 2. Go to next page for more info on the long term fuel efficiency, service station experience and troubles faced with the Ninja 250R

4)      About the fuel efficiency – there’s nothing much to share. The bike gives a mileage of 25kmpl in city and on the highways the figure increases to 27 (stock bike. Note: +/- 3kmph may differ on different Riding Conditions.

b)       The bike’s tachometer acted weirdly. Every time I used to roll off the throttle the needle used to oscillate to-and-fro at 6000rpm. I was specific on that RPM only! Even Probiking’s service engineer couldn’t Figure out the problem, so as a result I got a new Tachometer as replacement and ever since I haven’t faced any issue related to that.

6) Experience at the service station at Shirode, Pune: I must say that Bajaj mechanics and service engineer does take special care of the Ninja owners. They really treat you well and the service they have been offering has really improved! There are separate mechanics for the 250R and they have been given special training. In addition to that a certificate of the qualified mechanic is also displayed in the service center!

8)      Last come the modifications. So far I’ve done two upgrades on the bike. One is that I changed the stock bulb and replaced it with an H.I.D Kit. The reason is – I basically use a helmet with a tinted visor, so at night I find it difficult to see the road. With the H.I.D kit now the road is quite visible

9)      I changed the exhaust i.e the Muffler. Am currently using a Two Brothers Racing slip-on reason: wanted a little power and more sound.

At the end, I would like to say that buying a Ninja 250R is was one of the wise decisions I’ve made so far. And I would recommend this bike. If you have the money, it’s a bike worth keeping in your garage.