Motorcycle touring in India has come off age, and along with the pleasure of munching miles from dawn to dusk- carrying along the trip requirements with minimum fuss has become a necessity. Personally I remember my old riding days when I used to bungee shoulder bags onto the rear seat which kept sliding- be it while acceleration, braking or simply going over bad roads. Add to that extra weight on the shoulders carrying stuff in case of a longer trip. And if you had a co-rider, be it your best buddy or your girlfriend- it was either a polite no or pass on the luggage burden on their shoulders. 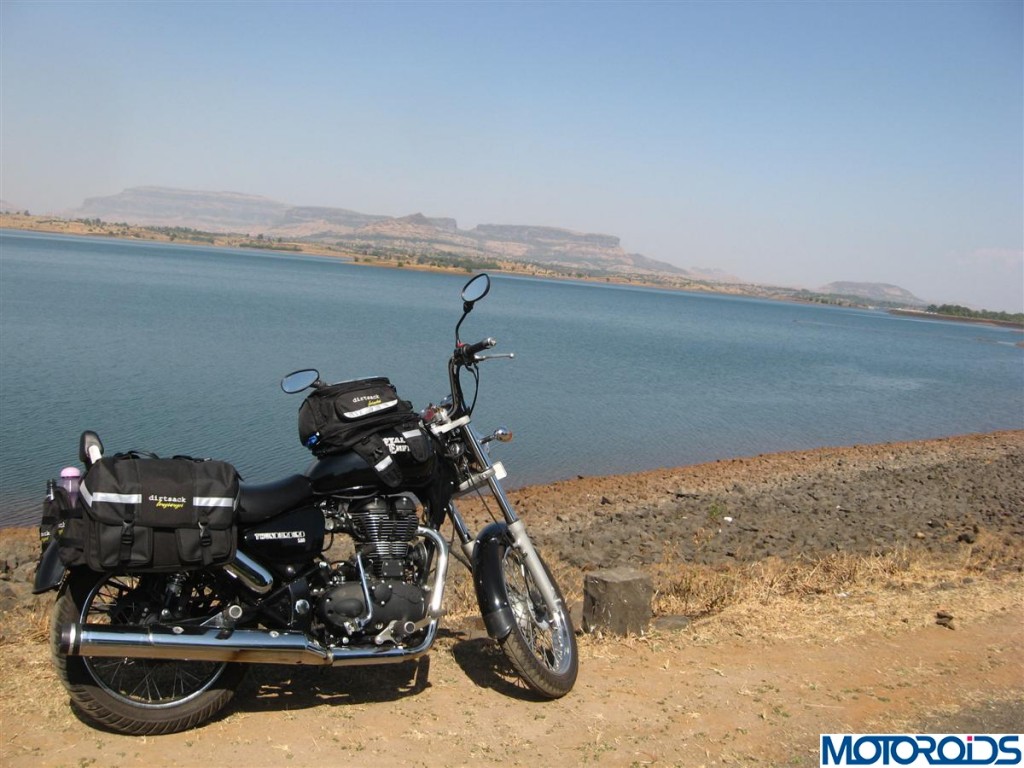 Fortunately that changed with introduction of motorcycle luggage that not only took all the tiring weight off your shoulders, but apart from carrying necessities on the trip could also accommodate an extra passenger whom you have been refusing all the time. Though the convenience factor was pretty much taken care of, but was found lacking when it came to build quality (torn seams, broken zippers) and a more evolved design. The bags would crease and crumple when stuffed and mounted on the bike- making it an eyesore to look at. The jugaad of ropes and bungee cords to get the balance right only made it look uglier. And if you needed to pull something out of the bag, it was a complete repeat of the painful process. But the issues seem to have been redressed and the past one year has been a rather hassle-free experience. Enter Dirtsack motorcycle luggage- who provided us with the Longranger Pro Saddlebag and the Forester Neo tank bag, which we put to extensive (and abusive too) use over a period of one year. What follows is our experience with the two. 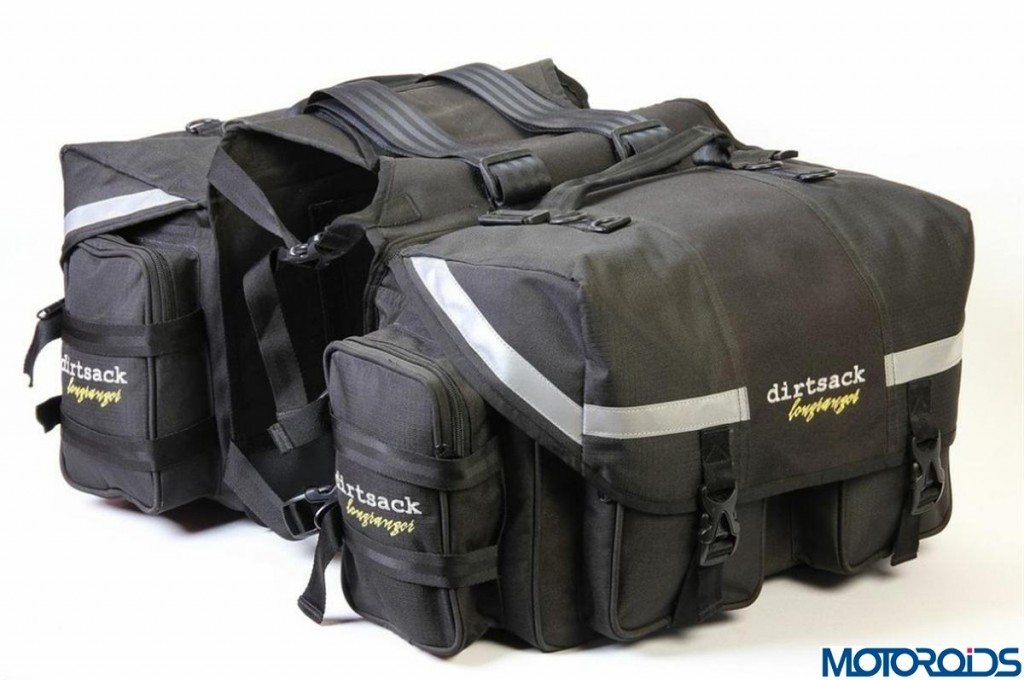 We start with the Longranger Pro- the largest saddlebag offering from Dirtsack Motorcycle Luggage. With 48 litres of carrying capacity, the first thing to notice on the saddlebags is the build quality. The Dirtsack Longranger Pro is constructed out of heavy denier ballistic fabric- the same material used in bullet-proof vests and jackets used by the army to shield them against flying bullets and artillery shell debris. Needless to say, the quality feels absolutely top notch and by the nature of the fabric itself- seems extremely durable. The straps on the saddlebags are made out of seatbelt material. To talk about the strength- the interwoven nylon of a seatbeat in a regular family car is strong enough to hold a weight of three tons- beat that! A simple, yet an extremely functional idea. 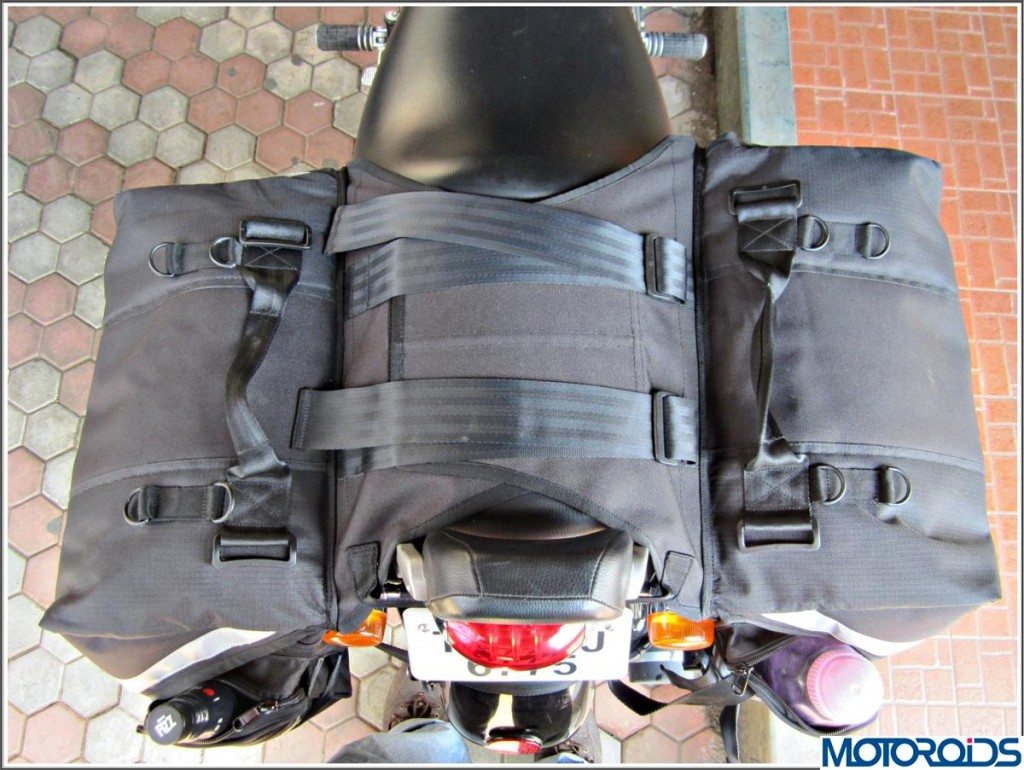 Talking about the crease and crumples, the base and sidewalls on the Dirtsack Longranger Pro are reinforced for shape retention when loaded to the brim, carrying light luggage or even if you happen to load it empty on the motorcycle- it still retains a square-ish proportion. 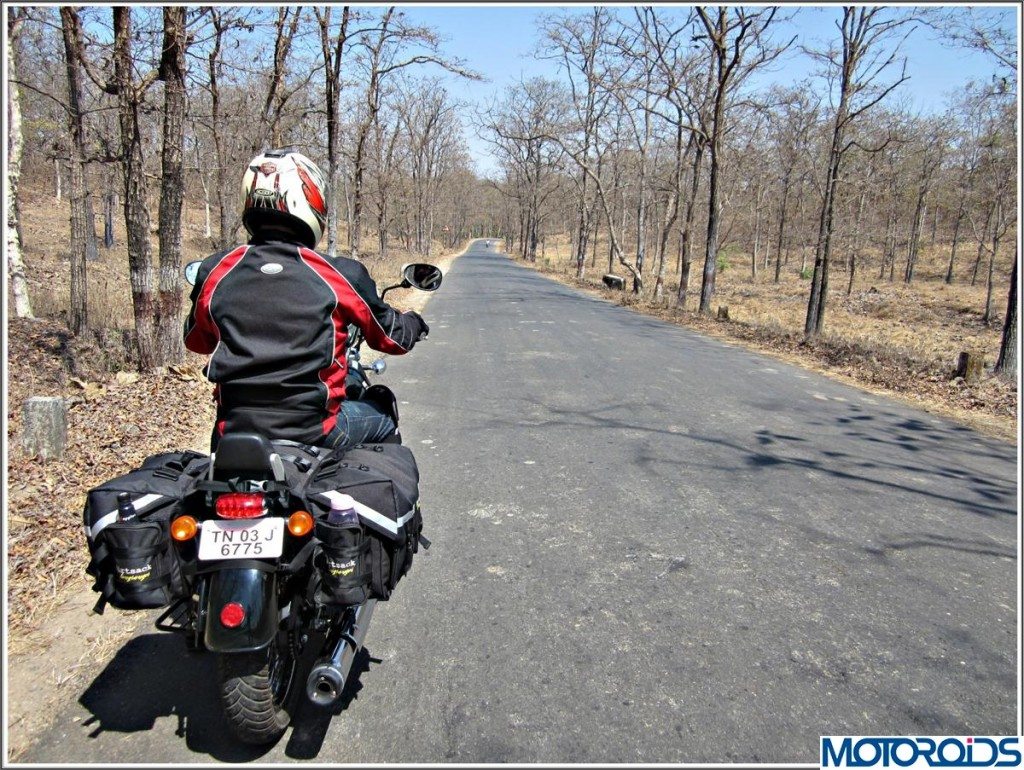 The quality and durability quotient is further demonstrated by the seams being bound on the inside with the stress points provided with ample reinforcement. The buckles are moulded out of high grade yet flexible plastic that adopt a firm locking mechanism unlike regular buckles where the plastic seems to lose their flexibility and tend to pull out of the slot under tension. The saddlebags are in fact two different units with links being held together by seatbelt material straps and industrial Velcro. The gap could be adjusted according to rear seat width and load capacity. Also extra straps with quick-release buckles have been put at various places to hold the luggage at points such as side shocks, rear fender and back rests/ grab rails etc. Bloggers or riders who love documenting their ride on the move can carry their laptops in a 14” cushioned laptop pocket. 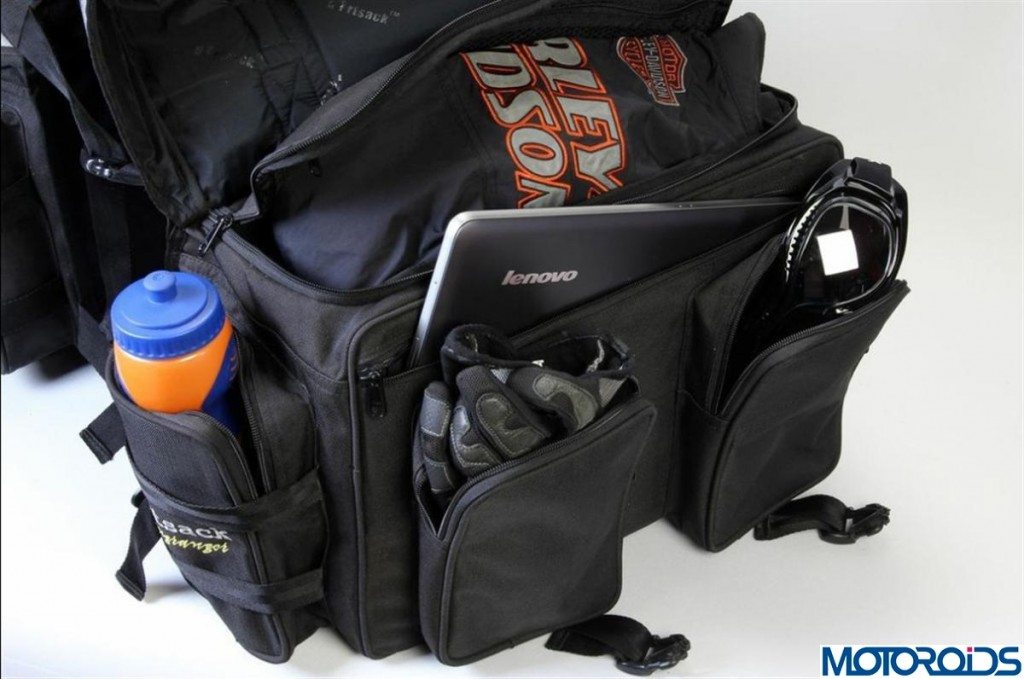 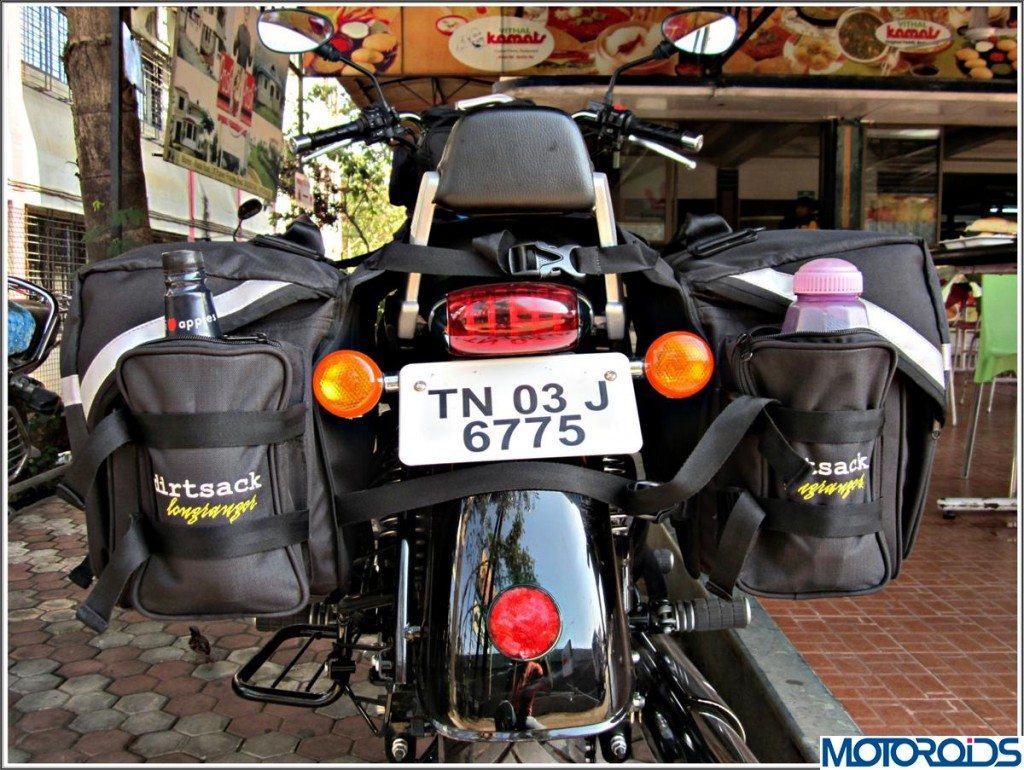 Utility pockets have too been given a thought with the Dirtsack Longranger Pro boasting as much as six exterior pockets with heavy duty YKK Zippers. The two rear pockets have been designed to hold 1.5 litre bottles which double up as spare fuel carriers and with two straps per pocket and zippers ensure that bottles won’t pop out of the pockets under any circumstances. 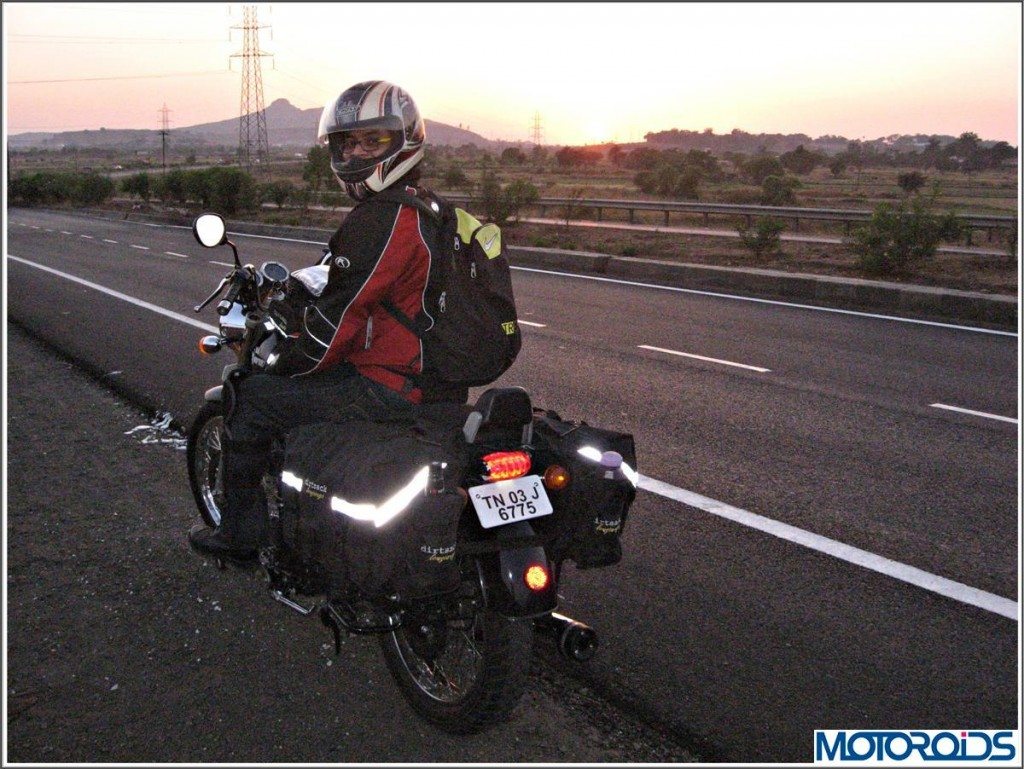 Broad 3M reflective tapes with luminous intensity of 500 cd lux have been put around the saddlebags for visibility in low light and night riding. 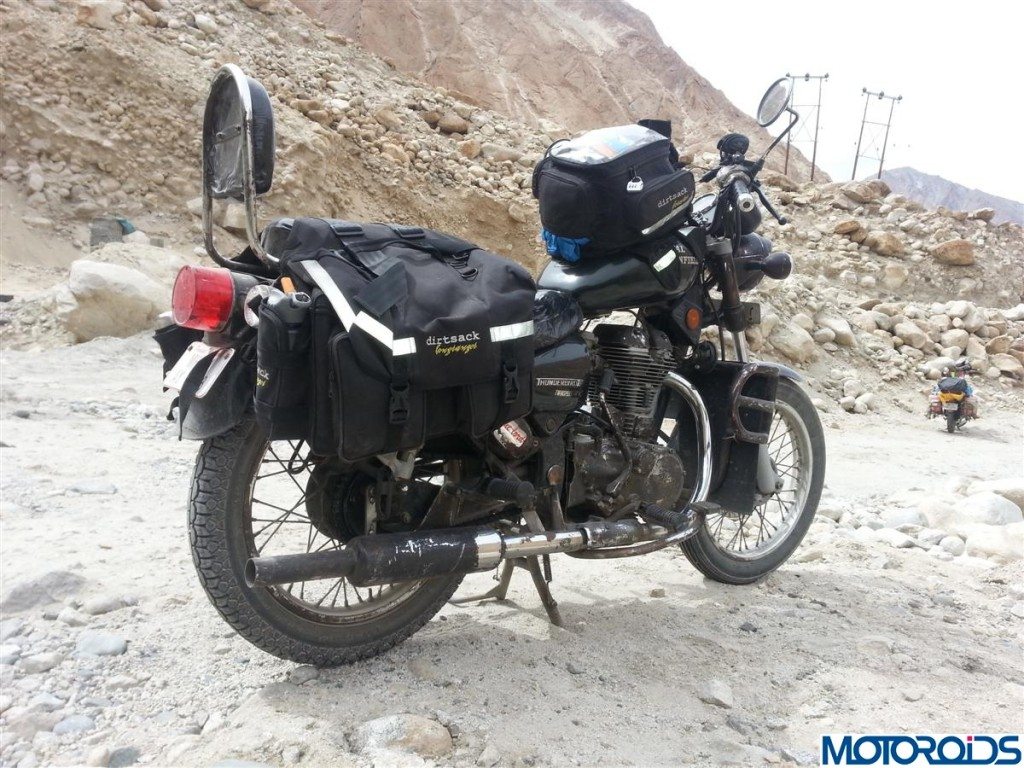 All said and done, the Dirtsack Longranger Pro was put to the ultimate test during a 15 day Ladakh stint when it was mercilessly crammed with stuff including toolkits/ extra fuel and never did it lose shape or balance going over the non-existent roads of the savage mountainous terrain. The zippers held fort and despite the usual crashes/ toppling over of the Thunderbird, the fabric rendered no damages whatsoever. A 100% waterproof seam sealed cover is also provided with the Longranger Pro eliminating the need of hideous tarpaulin/ plastic sheets. 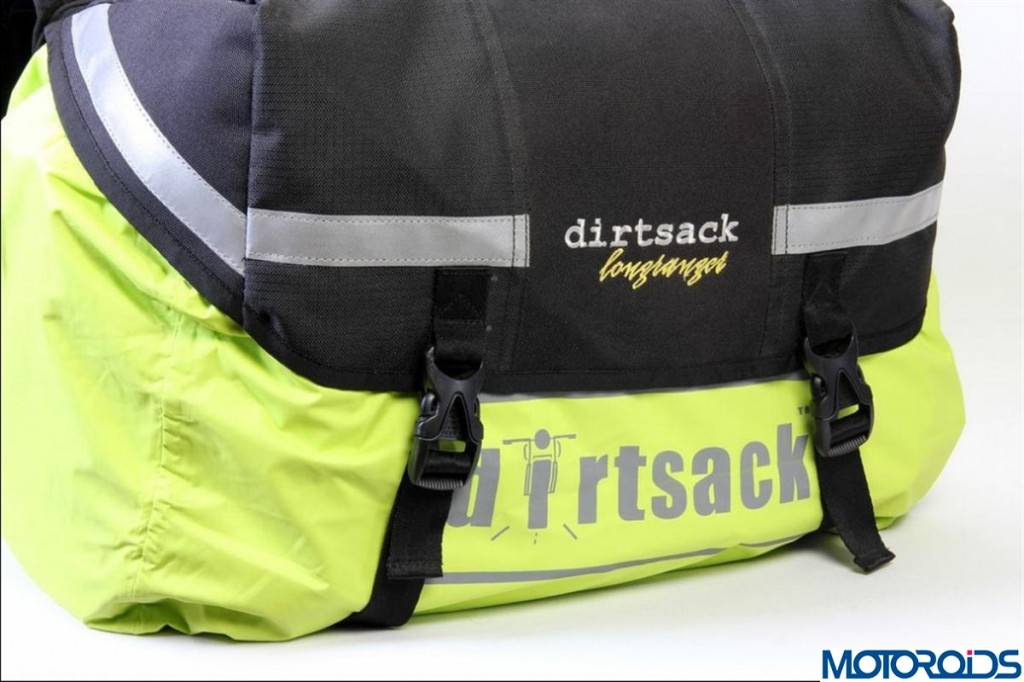 Priced at INR 4850/-, the Dirtsack Longranger Pro might seem an expensive proposition for most, but the fantastic build quality alongwith the thoughtfulness that has been put into making of the saddlebag isn’t a deal-breaker for the price it retails at. We’d say it’s a great one time investment and if you’re a regular tourer- the Dirtsack Longranger Pro should make for one great purchase. 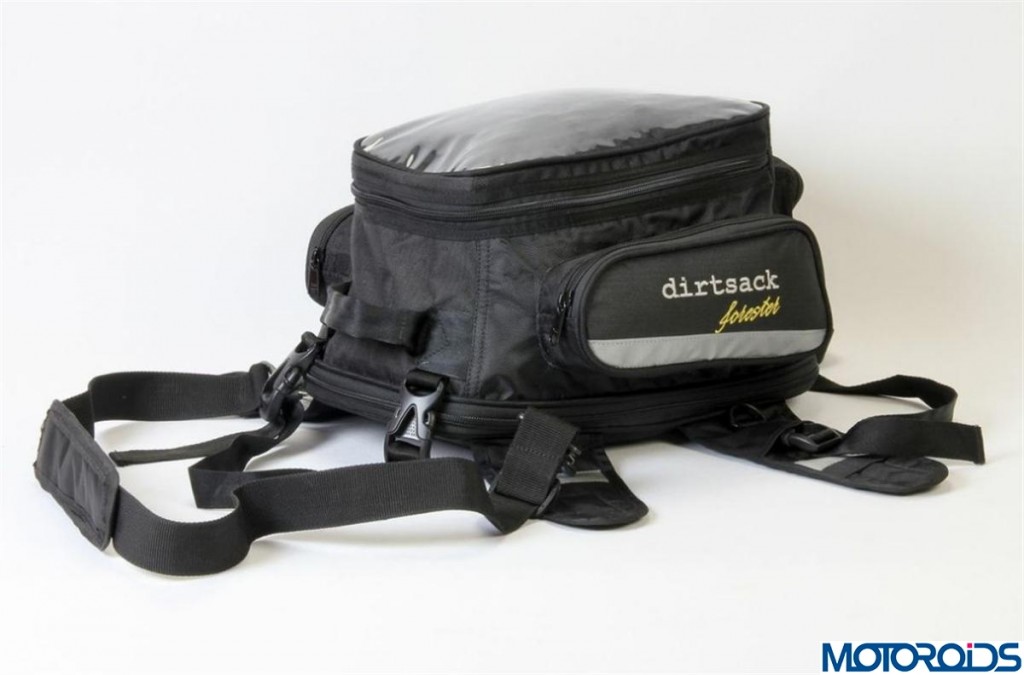 Next on the list is the Dirtsack Forester Neo Tank Bag. Talking of specifications, the Forester Neo comes with the same durable and heavy denier ballistic fabric with a Neoprene padded base to avoid scratches to that lovely tank of your motorcycle. On the Forester too, the seams are bound on the inside with reinforcements at stress points. Instead of usual 4 magnets found in regular tang bags, the Dirtsack Forester Neo comes with 8 ‘Rare Earth‘ Magnets to hold it onto the tank. Dirtsack has also provided 2 additional secure mount straps for added stability of the Forester- particularly for riders who love diving into the corners. 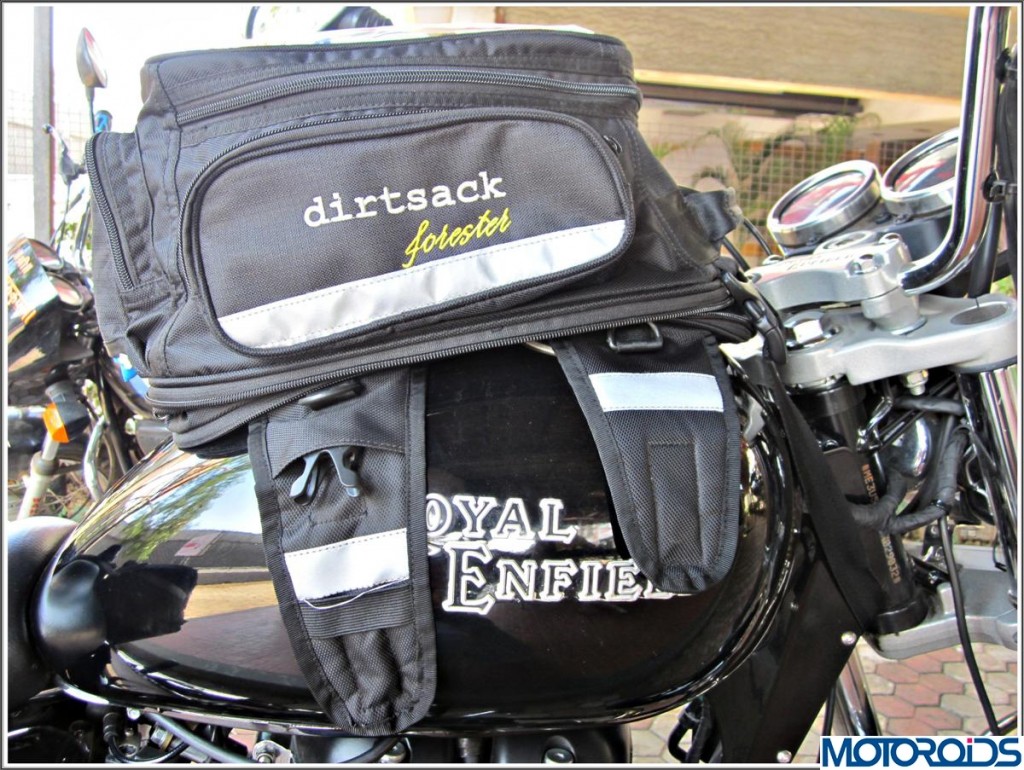 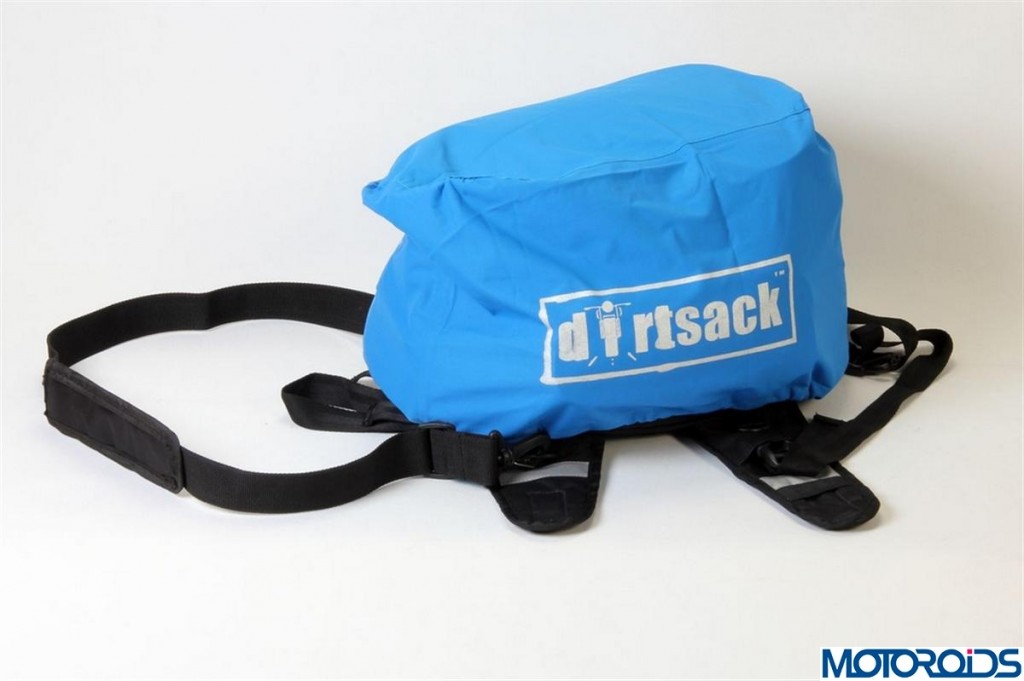 3 exterior zippered pockets have been provided alongwith a transparent map pocket and a waterproof rain cover has been tucked away in a stow pocket which can be conveniently pulled out when the heavens decide to open up. 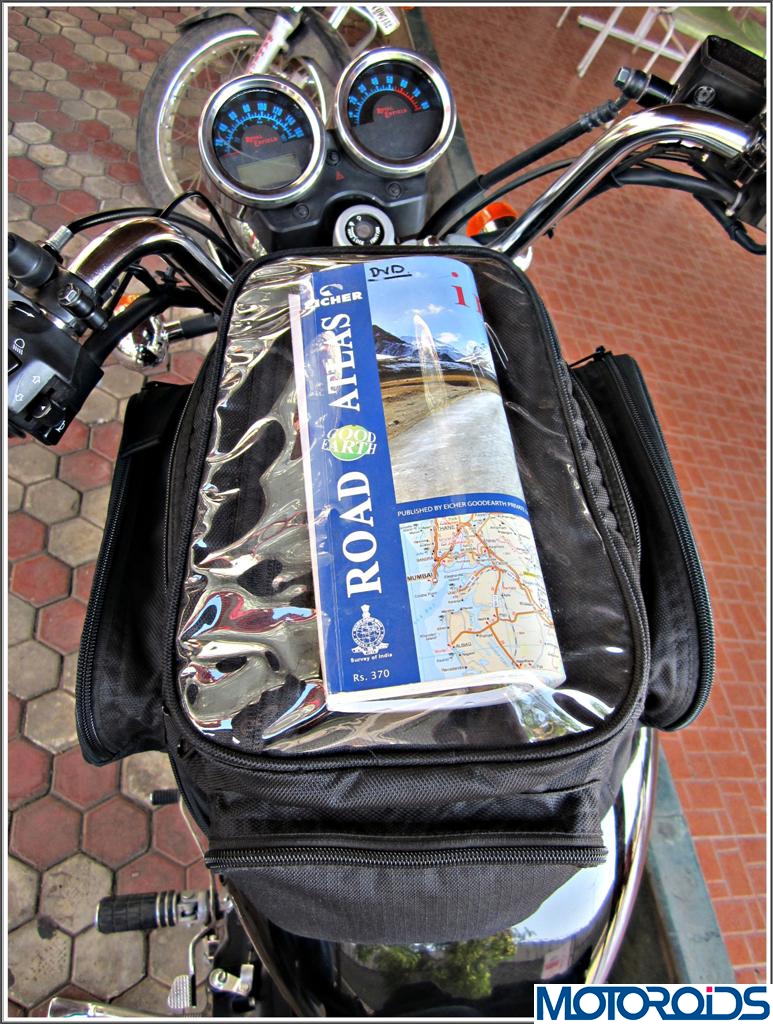 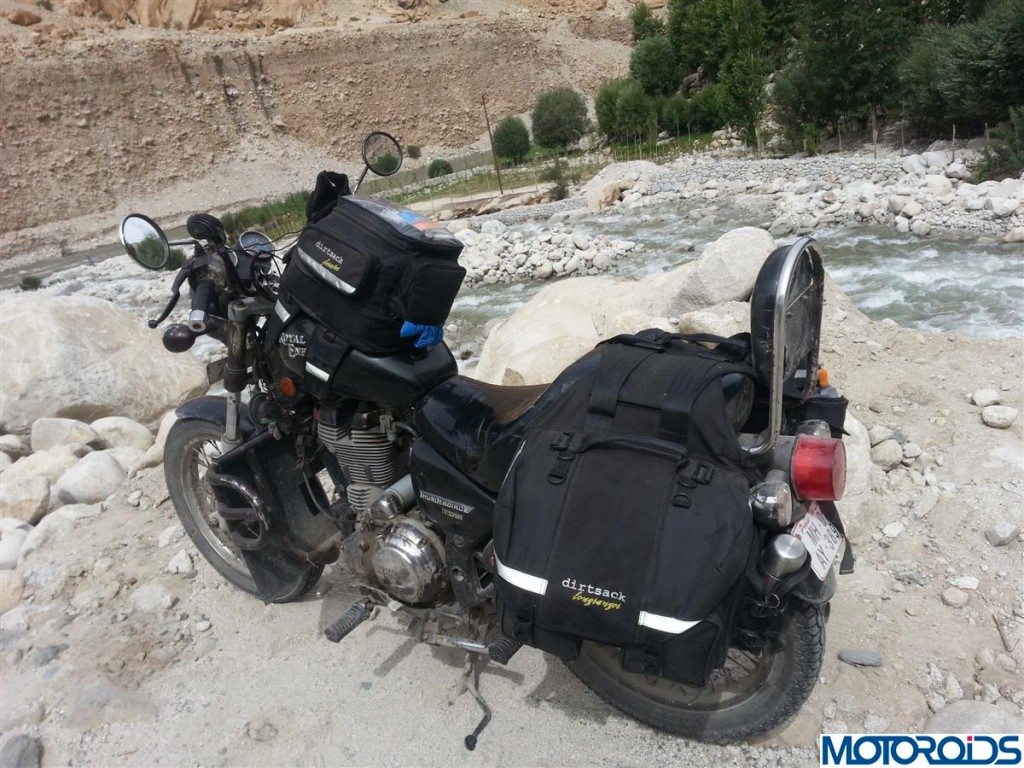 Alongwith the Longranger Pro, the Forester Neo too got Leh’d with numerous other trips where it also doubled up as a tail bag. The Forester Neo might look a little unit at first sight, but with a further expandable capacity of 4 litres taking the stock capacity of 16 to 20 litres- the Forester could easily swallow requirements for a 2 – 3 day outing as a standalone unit. 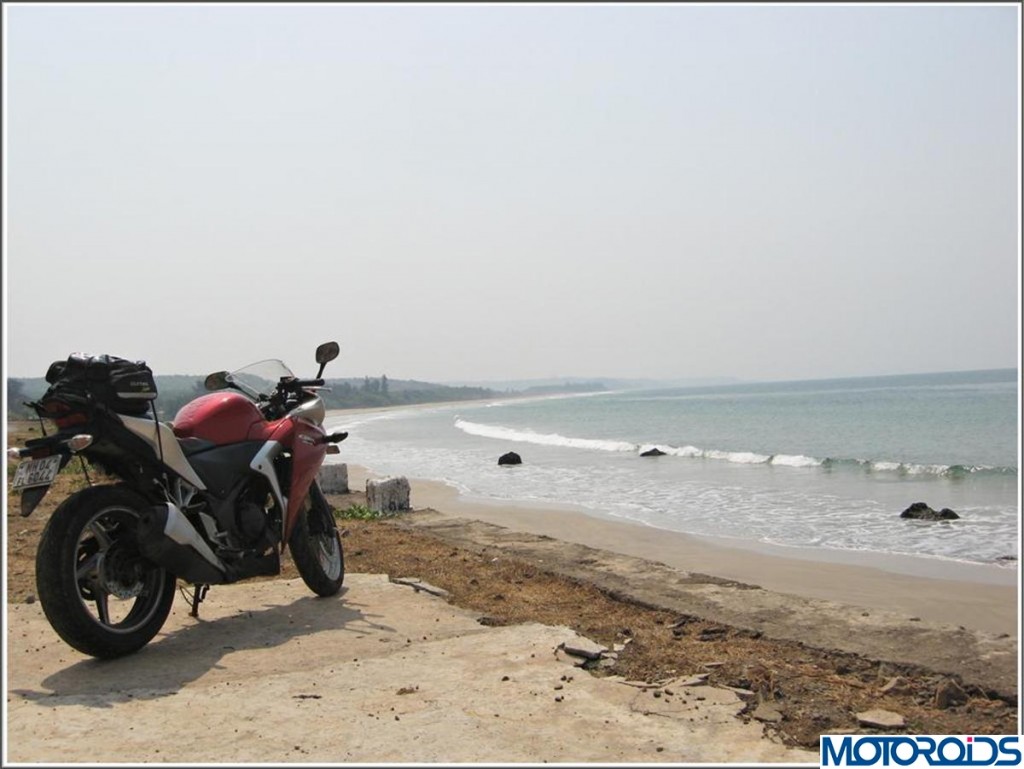 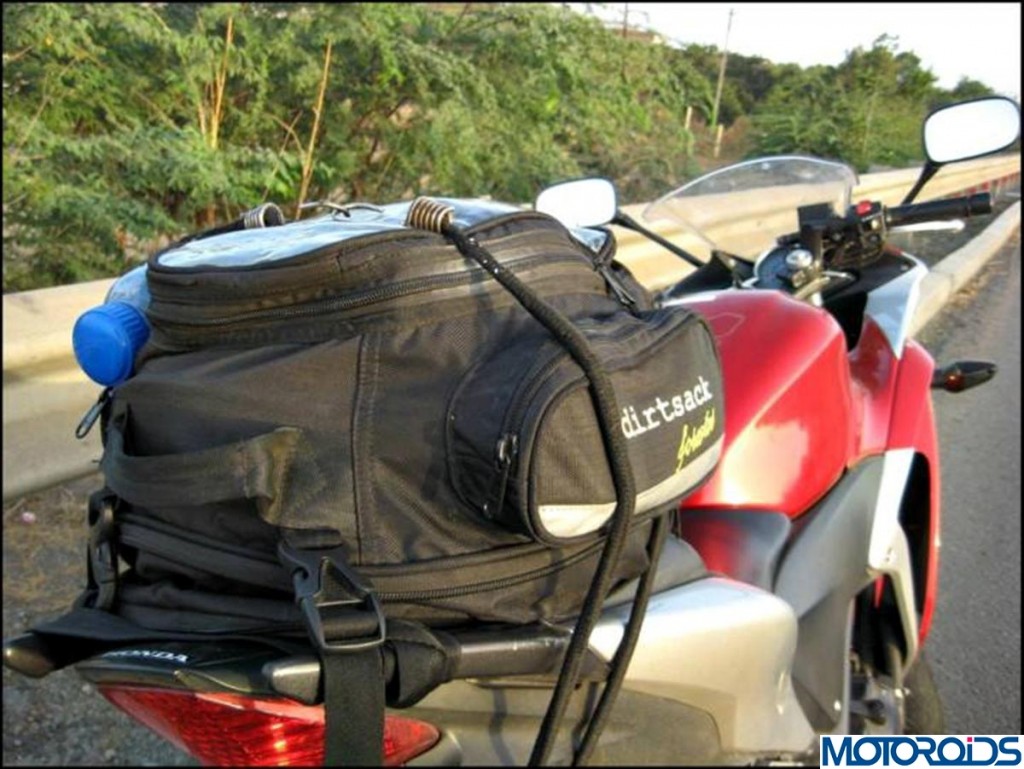 Where on one hand it complemented the Longranger Pro on the Ladakh outing on the Thundebird (notice the height of the Forester), it comfortably lugged around belongings on my CBR on short trips as a tailbag. The Forester Neo has been provided with a padded shoulder strap to conveniently carry out around as a sling bag when not on the bike. High visibility 3M 500 cd lux reflective tapes have been provided on the side-pockets and flaps for low light visibility. 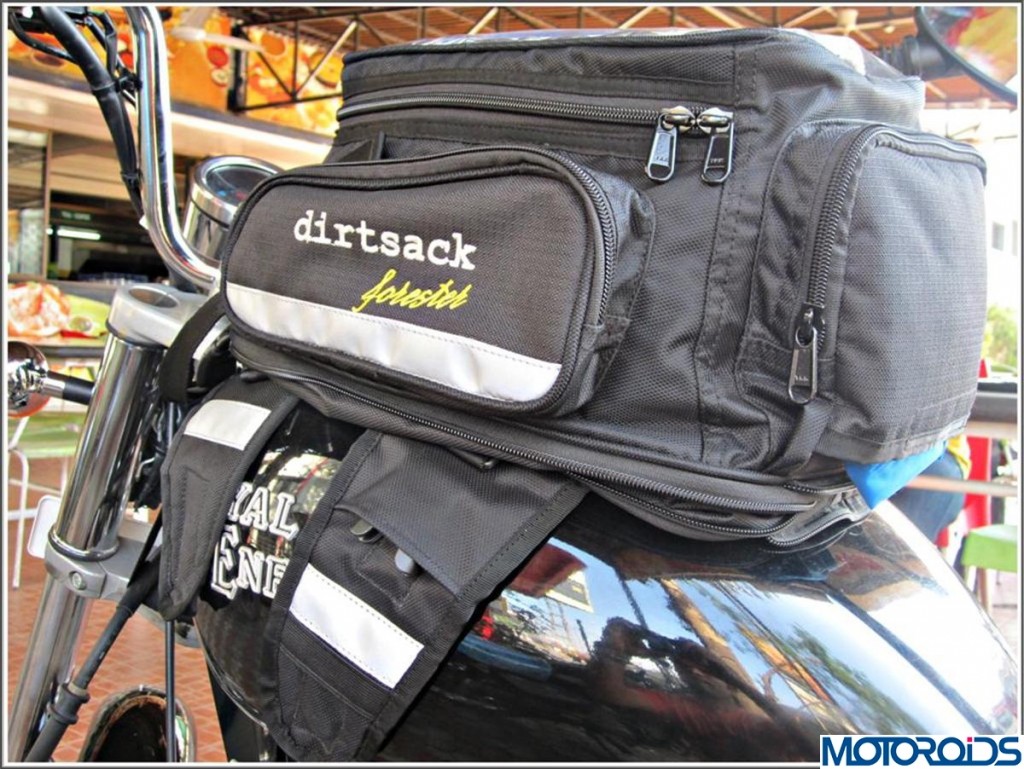 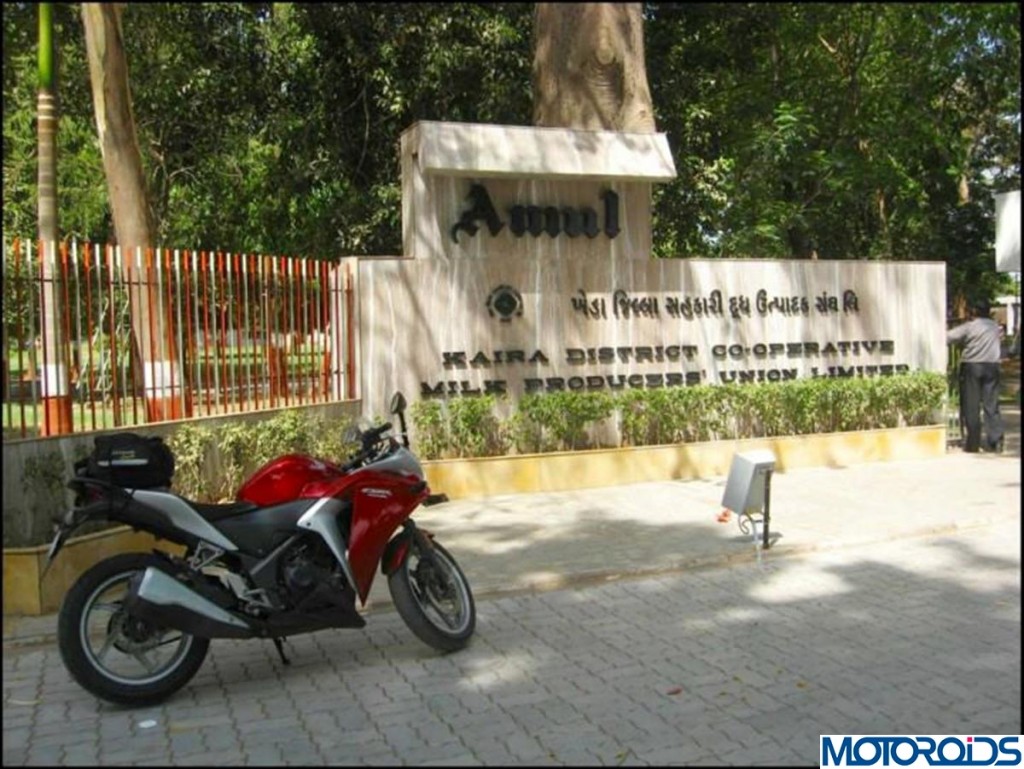 On the concluding part, we would echo our views of the Longranger Pro for the Forester Neo too. The tank bag reeks of good quality and construction. At a price of INR 2150/- it offers good value considering its carrying capacity and its ability to double up as storage on short weekend outings. A must buy!