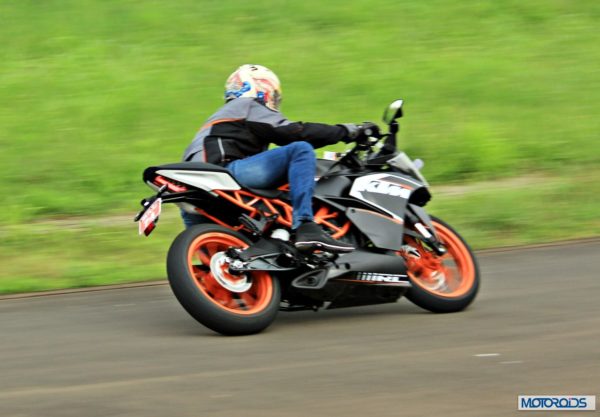 As humans, our minds are dictated by some unknown force to affiliate, like, remember and appreciate things which carry superlative adjectives before their names or things they accomplish. No wonder then, stack two things side-by-side and the one which attracts more words like better, stronger, faster and bigger in its favour is bound to pull more love in its field of gravity. It is a similar case with the KTM RC 200 and the 390. While both are dressed in similar space suits, the former isn’t much talked about or showered with attention as much as the latter.

To give you an analogy, let’s suppose both these motorcycles are designed for a special purpose, say walking on the moon. The RC 390 is running away with a lot of stardom it has achieved like Neil Armstrong, the RC 200 is more like Buzz Aldrin, slightly side-lined and quietly brilliant in its own way. 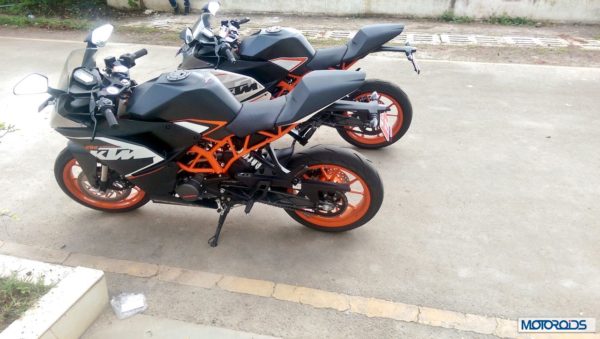 Some might think that it probably is just a faired iteration of the hyperactive Duke 200, and it isn’t incorrect to think that way. But just like its elder brother, you have to swing a leg over, twist the key, reach out for the bars, and that is when you get a whiff of the theatrical nature of this machine. The elements around you aren’t unabashedly naked and everything that adds to the persona of the RC appears meaningful.

Styling wise, there isn’t much that differentiates the RC twins, where the RC200 in particular gets a black treatment on the fairing and different decals in comparison to the RC 390. However, the rear under seat panel is the only thing painted white. Equipment wise, the RC 200 comes without any bar-end weights, ABS, gets a 280mm front disc in comparison to the 20mm bigger unit on the 390, comes shod with MRF rubber, but with a kerb weight of 154 kgs it happens to be 12 kilos lighter than the 390. 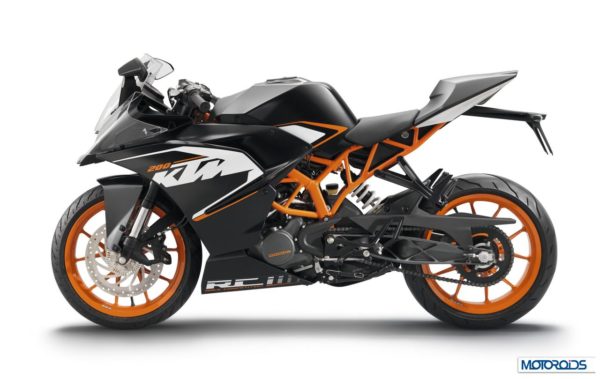 We were to spend 20 minutes on each of the bikes at Bajaj’s test track within their Chakan facility. We apologize for the limited images to go with the story this time, as we didn’t have enough time, and wanted to focus more on the experience. So we’ll stick to the performance and handling aspects of the RC 200 on track, that’s what the motorcycle is made for. 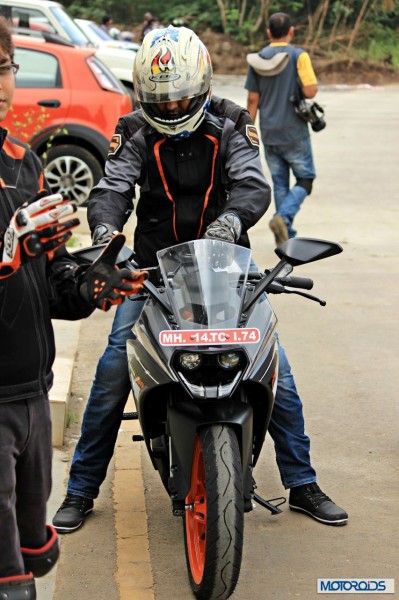 As we gently rolled out of the pits, getting used to the controls and the forward biased, committed seating position, the RC 200 felt nimble and light like a gazelle. After getting accustomed to the track layout, the visor finally came down and the rev counter reminiscent of a cellphone’s network bar started to receive signals meant for Iridium phones.

The RC 200 retains the short-geared nature of the Duke 200 and is a motorcycle which will keep you busy with the tacho’s manic climb up the rev counter. More often than not, you’d see the red shifter warning lamp blinking as the engine hits the 10,500rpm limiter. Having said that, shifts are lightning quick and the hyper active, eager puppy nature of this motor will make your pulses want to match those of the engine.  Especially so on a racetrack, where the zesty engine will keep you busy shifting. 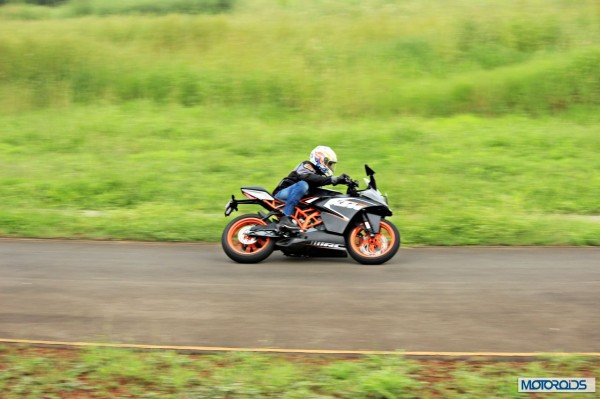 On straights, as you hide your frame behind the fly-screen, the motor spins effortlessly and in a vibe free manner to its top whack of 137 kph (speedo indicated) top speed in 6th gear, where the electronic limiter starts to cut in and might make you feel the motorcycle still has some firepower left. The trouble is, the RC 200 reaches its top speed in a hurried manner defying its smaller cubic capacity and leaving you amazed, and in a sense, wanting for more.

To describe a lap around the track, the start-finish line is at the end of a sweeping curve opposite to the pit-lane. The long corner follows the longest back-straight. Throughout this final curve, although the track was slightly damp, the RC 200 held its line and could carry high speeds with aplomb as we hung ourselves off the bike, shrinking ourselves between the inner most line and the motorcycle. 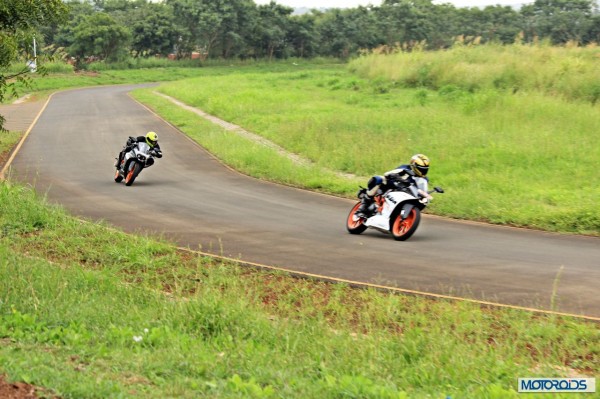 Post this curve and the start –finish line, one turns left again, and as you drop the anchors, the RC 200 displays no signs of nervousness. Another aspect where the entire package shines is when you enter the S’s, and as one shifts weight from one side to the other and dives into corners, the chassis remains taut and shows no signs of flex.

As you come out of the twisties, there is a fast left, followed by a right, post which you head into a straight, which dips into a hairpin that mimics the famous Karussell hairpin at the Nurburgring. What follows is a long back-straight we mentioned earlier, where there is enough space to push the RC200 to its top speed. Evan at triple digit speeds, the RC 200 remains composed, which is in stark contrast to the restless, passionate performance it delivers from the engine. 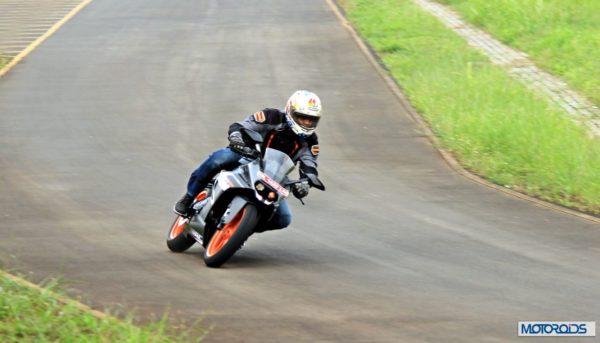 Now, in comparison to the amazing Metzelers on the elder RC or the Duke, the MRF rubber on the 200 isn’t in the same league. Costing a fraction of the pricey Metzelers, though, the Indian made MRF rubber does a great job of providing sufficient toehold. That said, the softer compound rubber on the RC 390 is decidedly superior. Absence of ABS takes that additional safety cover away, but the brakes accomplish their tasks with finesse. 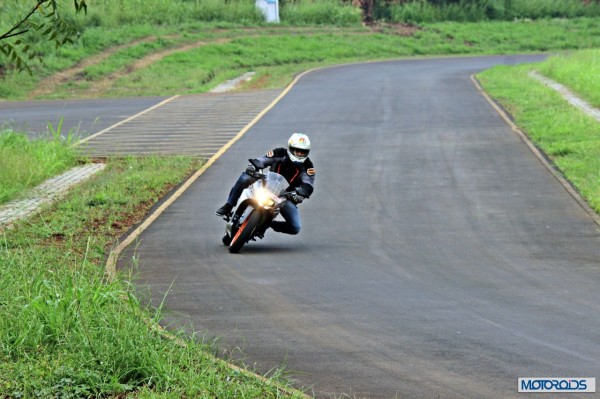 So there’s this thing with twins and siblings, where often it’s the elder one who is the only tree up on the hill. Perched at a height, it has the advantage of being visible to the world, where on the other hand, the younger ones always have to work their way hard to be recognised. The ones, who manage to see the spark in the lesser known sibling are quick to realise that both in the end belong to the same blood line and similarly, the RC200 is an enigma that will spin its web around you and leave you enamoured if you relate to the characteristics of the motorcycle.

The fact is, both the RC 200 and the 390 narrate gripping stories, something that keeps you enthralled throughout the time you spend on the saddle. Now if you have to make a choice, just ask yourself, which story do you believe in more? 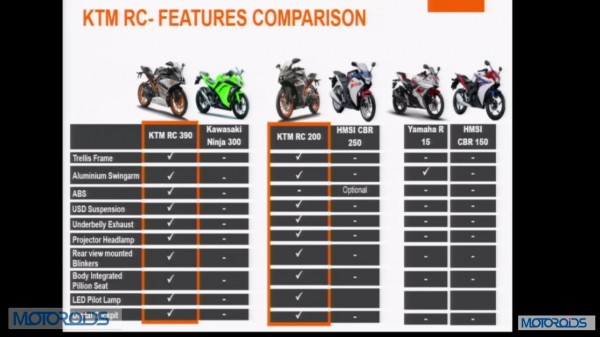