The SUVs have taken over the world and when you talk about the Indian market, it’s the Koreans who are seeking domination. Hyundai and Kia both have wreaked havoc on their competition and the onslaught will only intensify further. Kia recently unveiled the Sonet and going by the way it looks and the hoard of features it packs, it looks like the Korean carmaker has another winner at its hands.

Though the prices aren’t out yet but we recently got behind the wheels of the Sonet to see if it is actually worthy of the throne or is it just big talks and no show.

Talking about the dimensions in general, the Sonet is comparatively bigger than the Venue. While the Venue looks more sophisticated and looks chic in terms of styling, the Sonet comes out as its brawn and muscular cousin. Both the siblings are poles apart in terms of styling but look attractive in their own way. The Sonet has rugged written all over it and that has been Kia’s theme from the start, when it comes to the Sonet. Remember the teasers of the Sonet with ‘Wild’ written all over them? 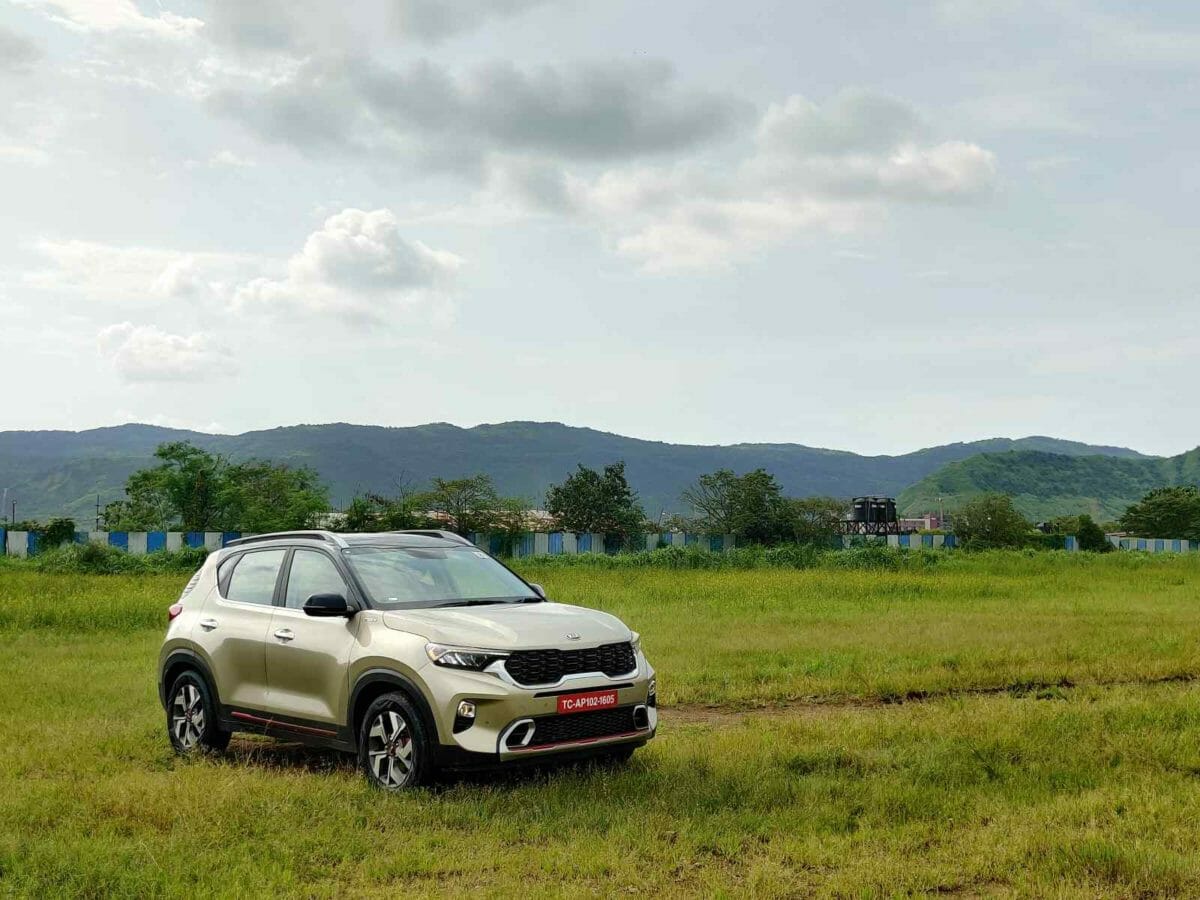 The exterior is full of premium touches here and there and the top-variant dubbed as GTLine which we got to drive, also had red inserts splattered all over the car. Even the grille is devoid of any chrome which further complements its butch appeal. The headlamps are LED units and there are nice piano black housings for the fog lamps.  The brawn look is carried forward to the side profile as well where the 16” alloy wheels take all the attention. If designing alloy wheels is an art, Kia has surely hired a maestro for the job. 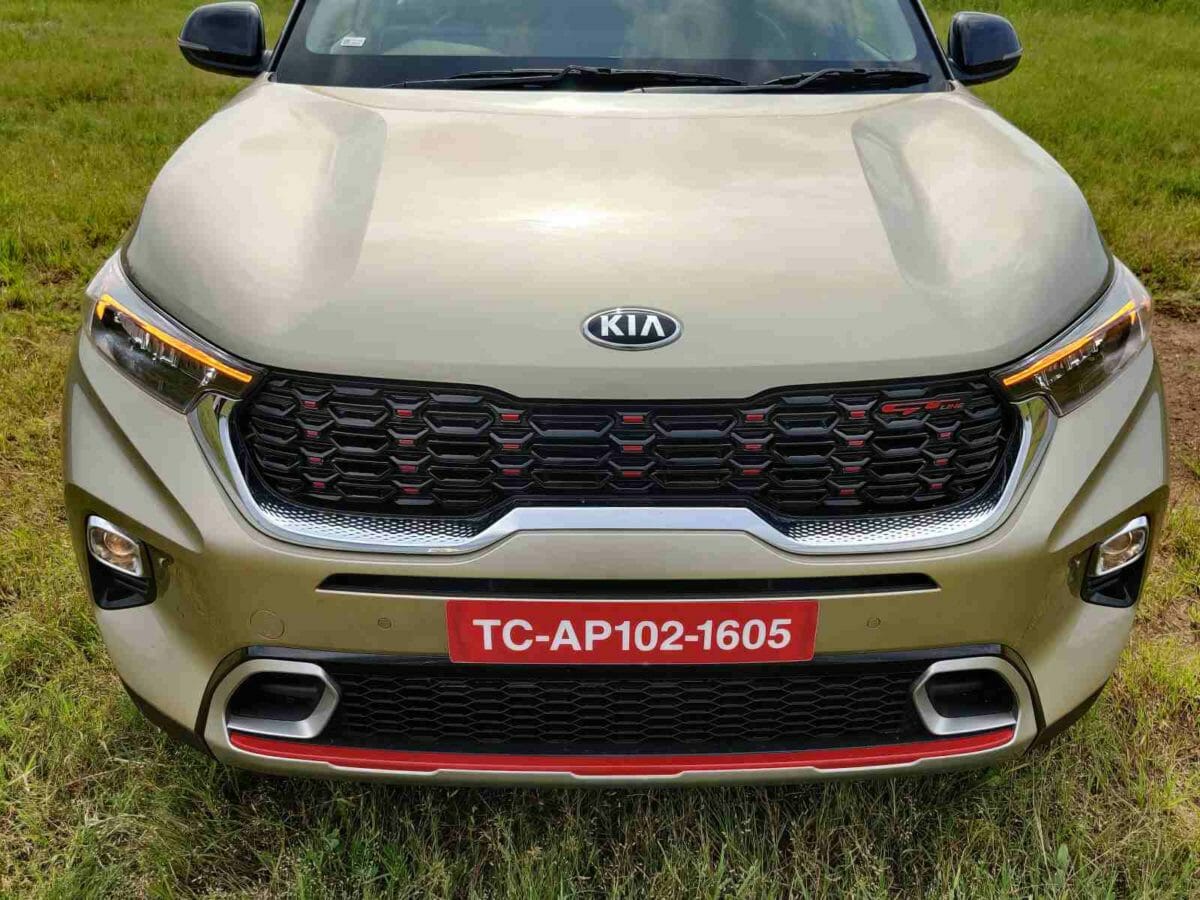 The Sonet is also available in two-tone treatment and the Beige gold colour scheme with blacked-out top looks particularly astonishing. Another highlight is the C-pillar which Kia has dubbed as roll-bar styled and it further boosts its muscular looks.  The tail lamps are LED units too and the whole layout of the rear end gels well with the rest of the car. If you are looking for a muscular car which will caress your male ego, even more, the Sonet is what you should opt for. 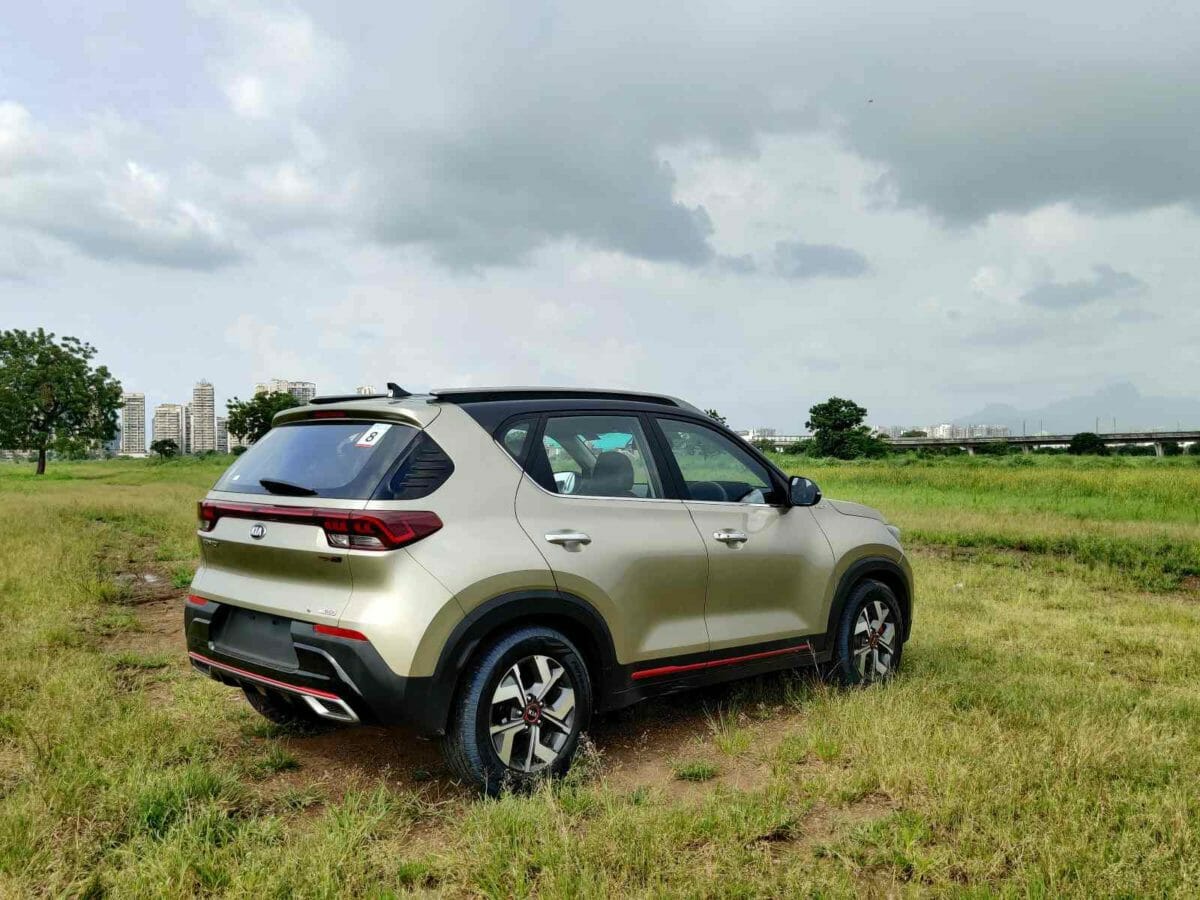 If you think the design is the strongest point of the Sonet, then you must get a sneak peek inside the cabin and you will realise it is something different altogether. Designed to maximize driver and passenger comfort, the Sonet’s interior is modern, vibrant and offers a high sense of dynamism to drivers. Trimmed in high-quality materials, its dashboard provides owners with the car’s full range of user-friendly features, including a two-layer tray to store mobile devices and other items while driving. 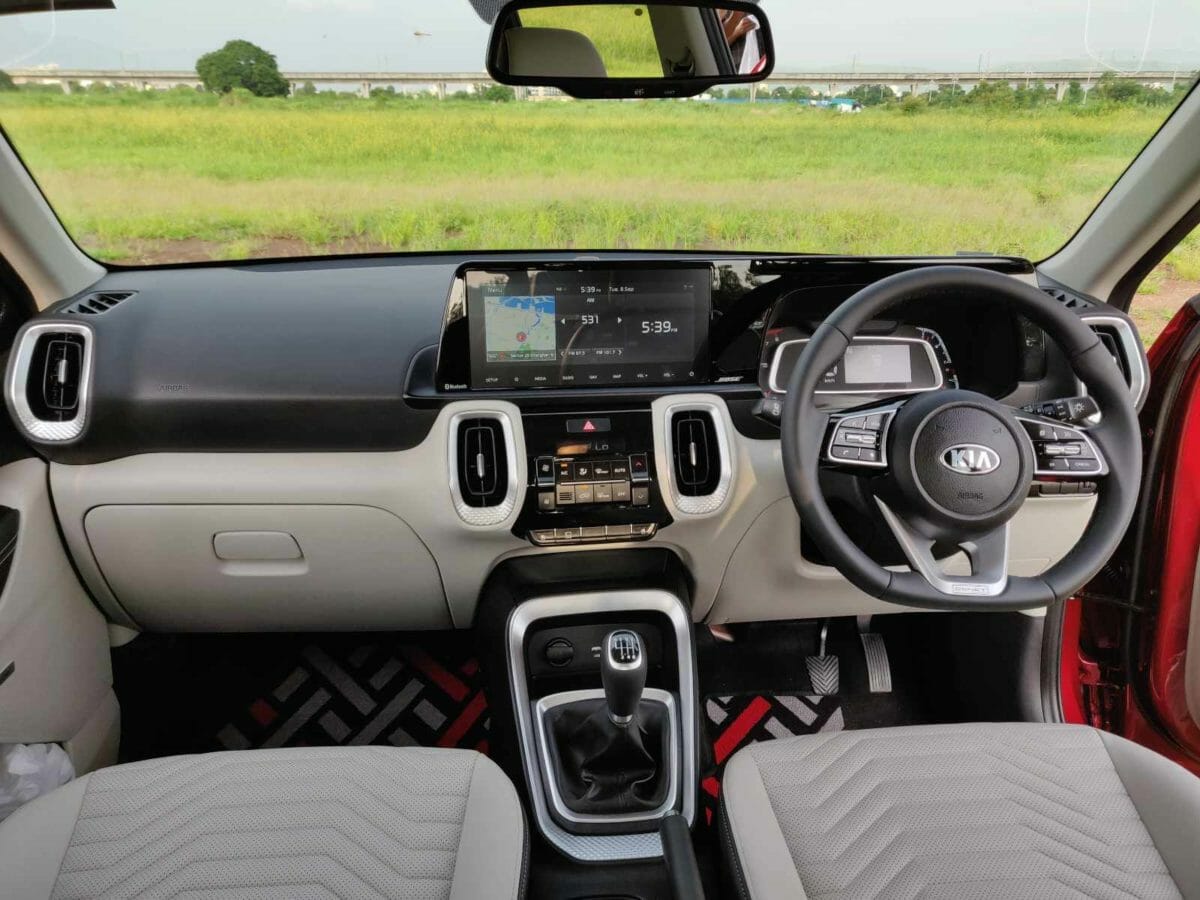 A large 10.25-inch HD screen adorns the dashboard of the Sonet and it – much like Seltos – gets UVO connectivity options. Apart from the usual AV duties, it puts out live traffic information and will get Over-The-Air (OTA) map updates. A wireless smartphone charger with cooling function has also been incorporated. Another notable feature addition is the Air purifier with Virus protect technology. Kia has matched the Venue on equipment and then added on some more too like, for example, a 7-speaker Bose sound system and ventilated front seats for both driver and front passenger. The Sonet also gets a Tyre Pressure Monitoring System and cruise control. It does miss out on 360-degree camera though. A one-touch sunroof is also included in the package. 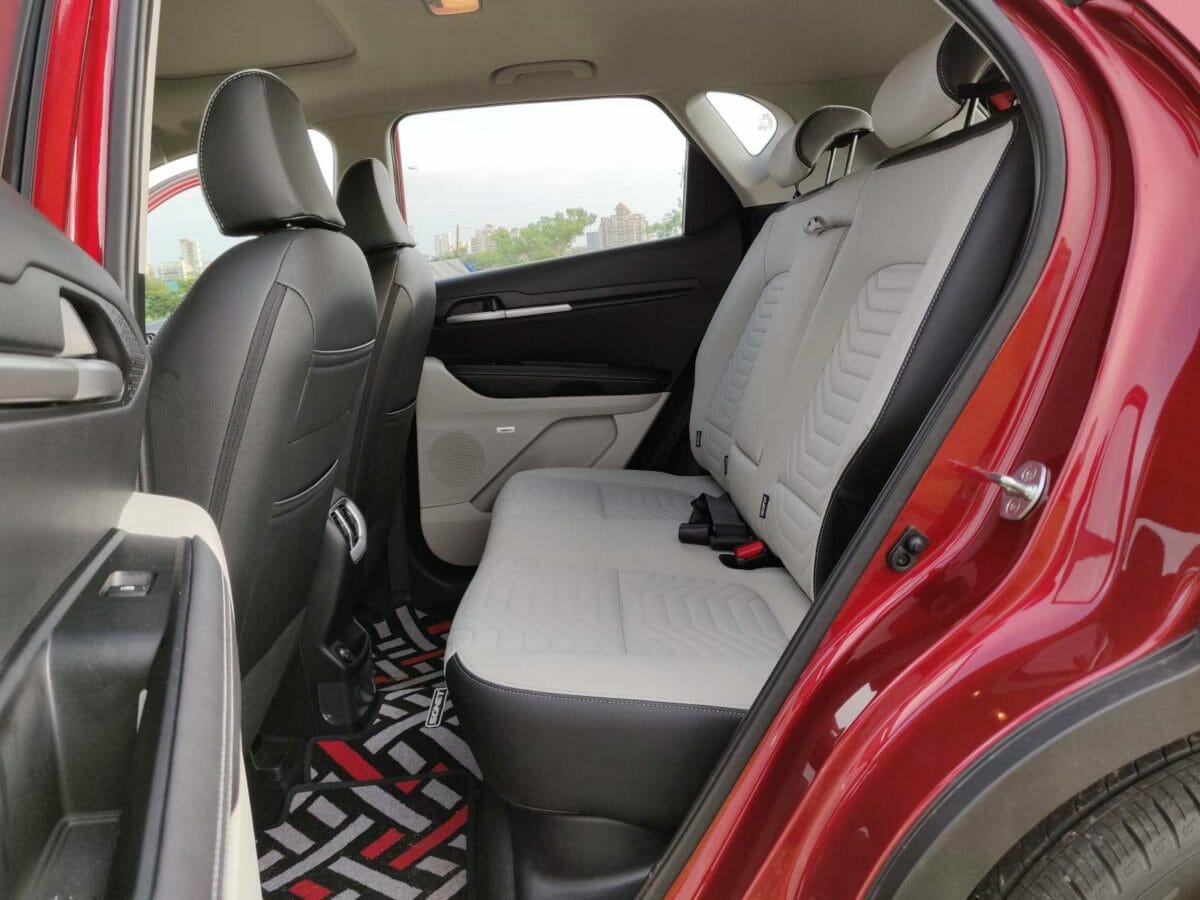 Kia claims that the legroom at the front has been compromised by 10mm, as compared to the Hyundai Venue but it eases up more space at the rear, 20mm to be precise. Kia hasn’t ignored the safety department and the Sonet shines in this aspect as well. The Sonet comes equipped with 6 airbags, ESP, ABS and traction control which has 3 settings: Snow, mud and sand. The only gripe that we have is the absence of a telescopic steering wheel. 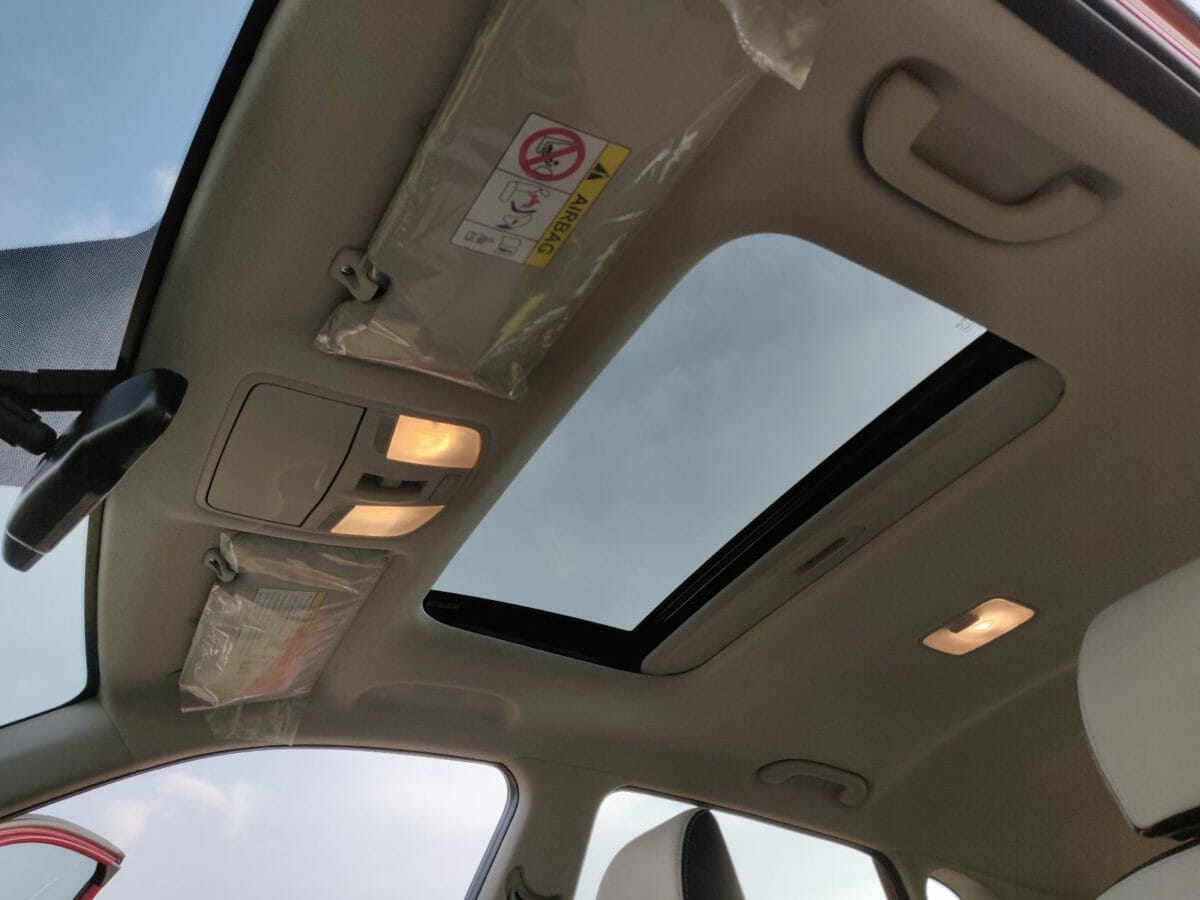 The rear seats are quite spacious too and the rear passengers will also appreciate the sense of space. The rear seats are more comfortable than the Venue and the seats are well contoured with optimum padding. Kia also claims that they have worked on the AC too, particularly to comply with Indian conditions and that shows because when we were out in the scorching heat, the powerful AC managed to keep us calm and cool. The Sonet has another strong point which trumps all other rivals in its segment and that is its boot space which can hold 392 litres of luggage. The closest rival in terms of space is the Ford Ecosport which has 352 litres of boot space. 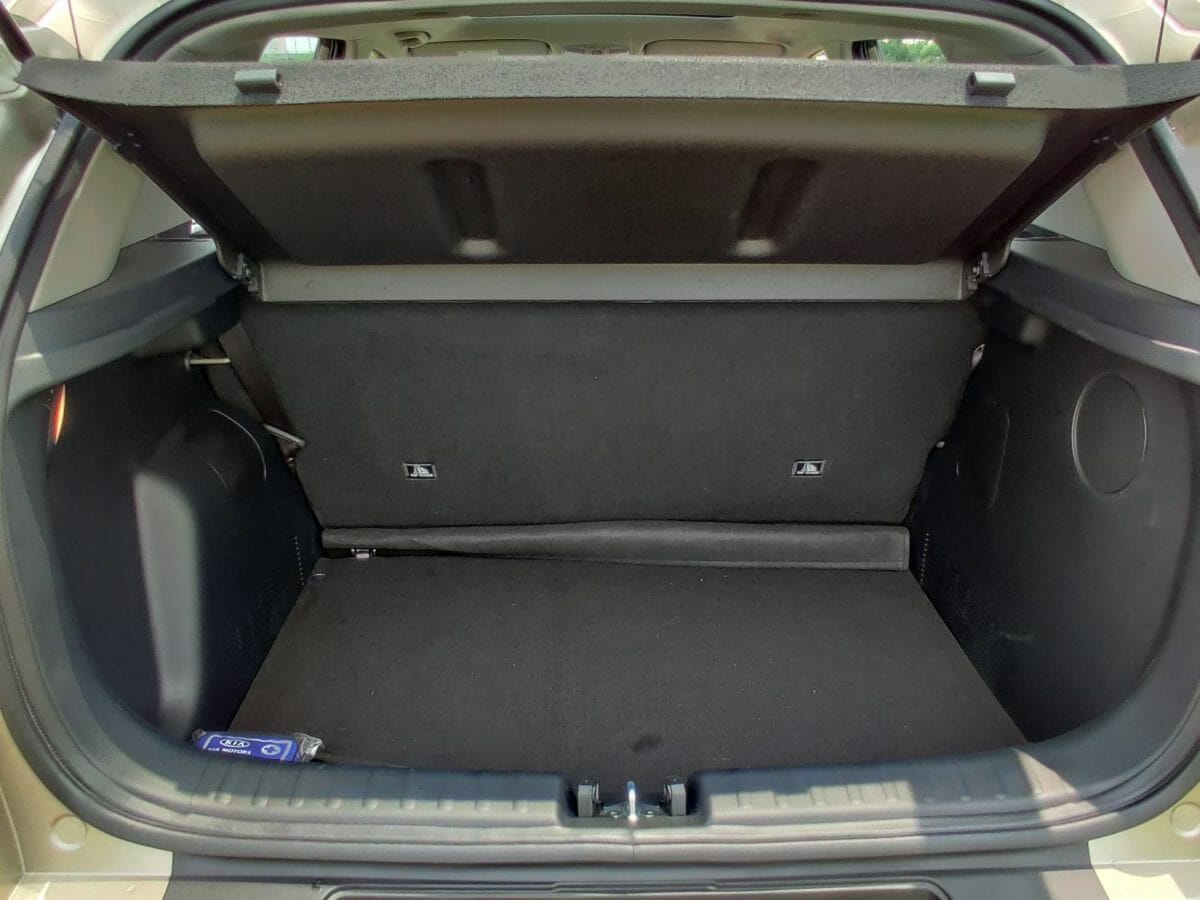 Engine options include a 1.2-litre naturally aspirated petrol motor which churns out 82bhp/114Nm. There is also a 1.0-litre turbo petrol mill on offer which churns out 118bhp/172Nm. The 1.5-litre diesel will also be part of the Sonet’s powertrain options and it churns out 99bhp/240Nm. Transmission duties are carried out by a wide range of options which include a 5-speed manual, a six-speed manual, a six-speed torque converter automatic, a 7-speed DCT as well as a 6-speed iMT (clutchless manual) like in the Venue. The interesting addition though is a six-speed automatic for the diesel engine, which is a first for the segment. We got to drive the turbo-petrol Sonet with 7-speed DCT extensively and the iMT for a brief amount of time. 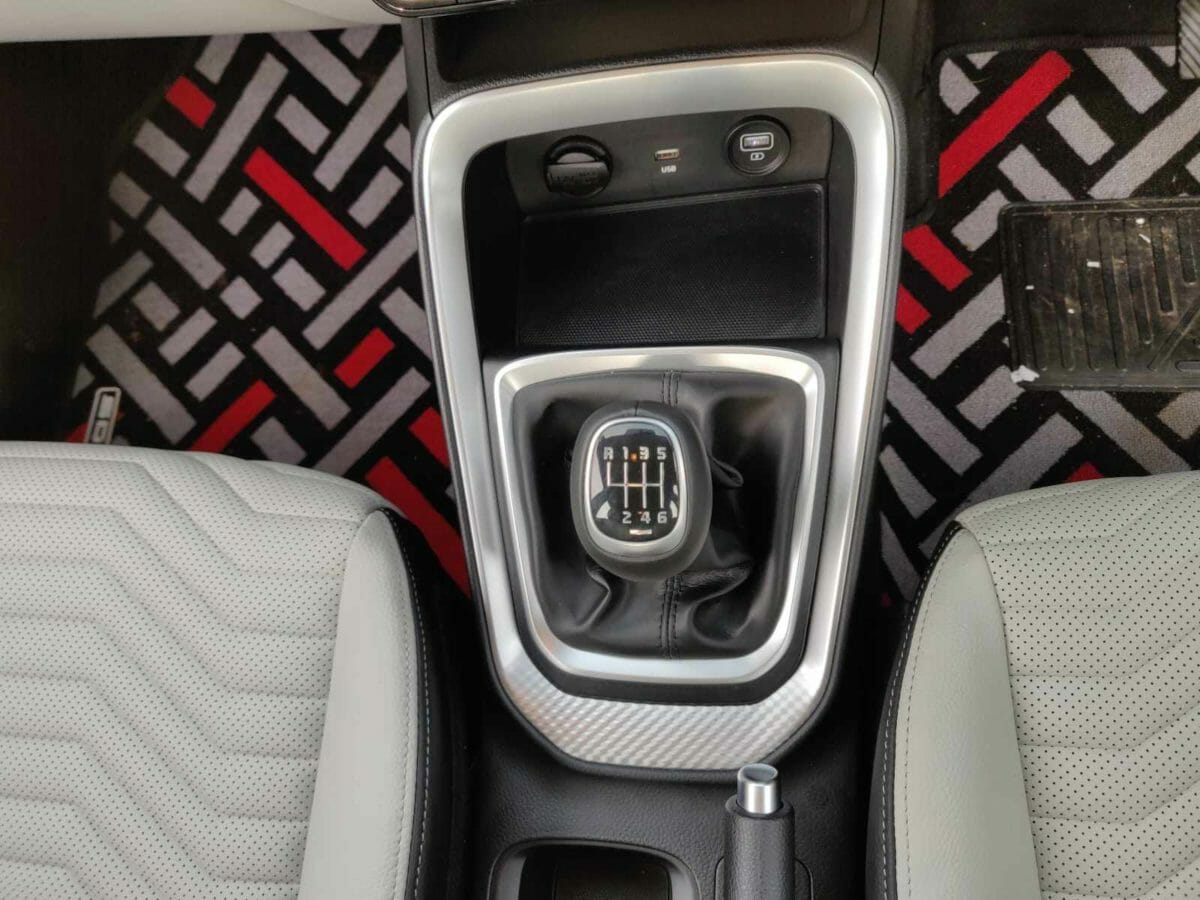 You might think that the turbo petrol motor is performance-oriented but it works very efficiently in day to day use as well. It feels sufficiently powerful and tractable at the same time. The 7-speed DCT automatic transmission offers seamless shifts and works in perfect conjunction with the sprightly petrol motor. It is an efficient motor too with ARAI certified fuel efficiency of 18.3 kmpl. It does 0-100 in 11.3 seconds while the iMT takes just a single second more to reach the figure. The 7-speed DCT is one of the best gearboxes in its segment. Although it is too much to ask for in this segment but the inclusion of paddle shifters would have added to the overall driving pleasure.

The only department where the Kia Sonet isn’t as impressive as it should be, is this. It fits the phrase ‘Jack of all trades, master of none’ pretty perfectly. It is not as plush as the Venue and one might think that if it isn’t that comfortable, it would make up for it in terms of handling and driving dynamics, but that isn’t the case either. It feels a little skittish when you push it around the bends and doesn’t feel connected to the road. Either Kia should have set it up to provide a plush ride or they could have made it driver-oriented car but the Sonet hangs somewhere in the middle. Don’t get us wrong, it is still a comfortable car and handles well but then again, it doesn’t ‘excel’ in any of those departments. If you are an enthusiast, you won’t find it very communicative. 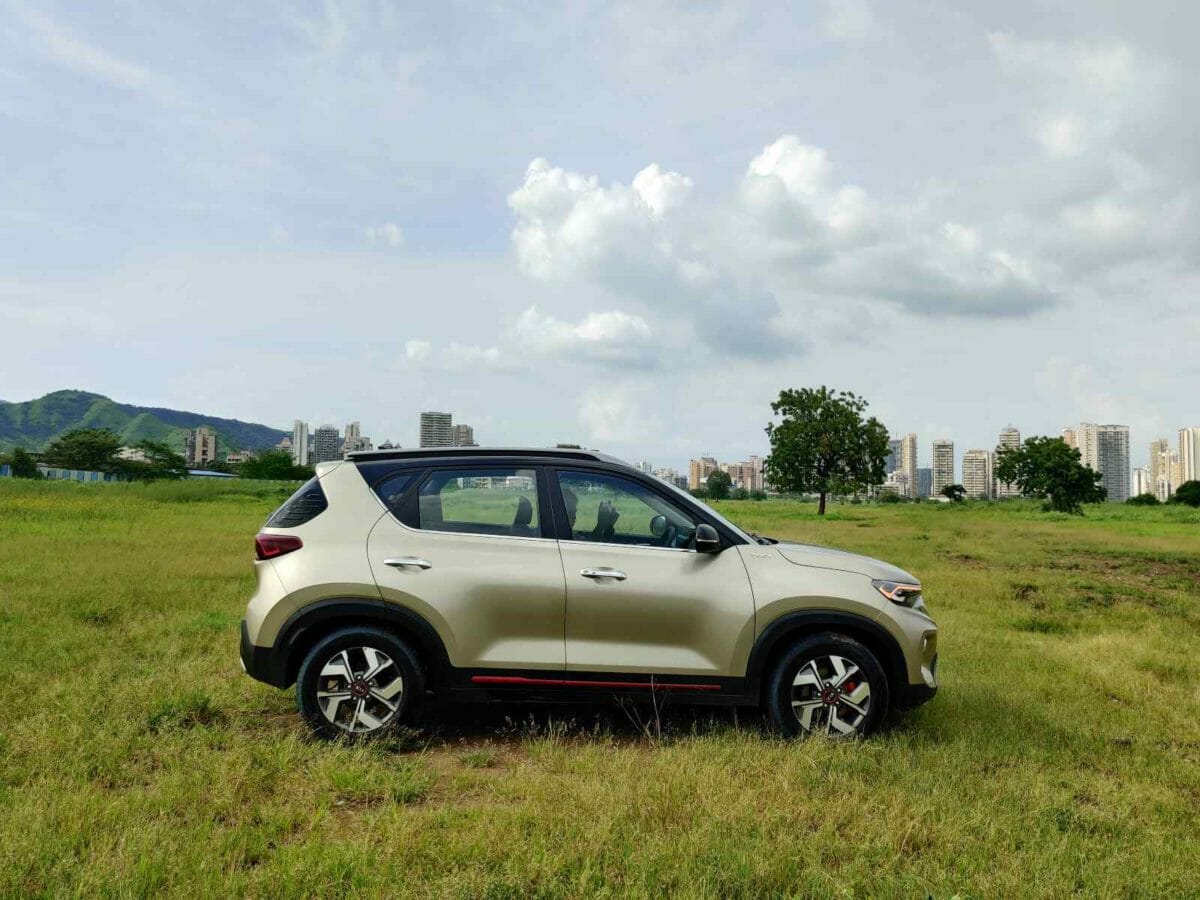 The Sonet comes with three driving modes, namely: Eco, normal and sport. The steering wheel does weigh up in the sport mode but it doesn’t feel natural. The overall experience might have to do with the increased ground clearance which stands at a respectable 205mm.

Apart from its tech-laden cabin and spectacular looks, the Kia Sonet has one more trick up its sleeves. Kia is offering the Sonet in a trim which isn’t present in any other cars in its segment and we are talking about a proper automatic transmission which works in conjunction with a diesel powertrain. The diesel powertrain in the AT variant is only available in the GTLine variant which means that it gets all the frills and the exterior is adorned with the red inserts. The diesel powertrain encompasses variable geometry turbo which has increased its power output and overall performance. It now churns out 115 ps and 250 nm which is significantly more than the diesel engine found on the Venue. In its lower-spec variant, the diesel engine produces 100 ps and 240 nm of torque.

This variant of the diesel powertrain does the nought to 100 kmph run in 11.8 seconds which is respectable. The diesel motor is very linear and smooth in manner. You would expect it to have that pronounced shove after crossing 2K rpm but it remains linear throughout the rev-range. One might miss the shove but the low-speed driveability this powertrain brings on the table more than makes up for it. Diesel engines are infamous for their gruffness as compared to their petrol counterparts but this is where modern diesel powertrains like this one, shine! It is as smooth as its petrol counterparts. 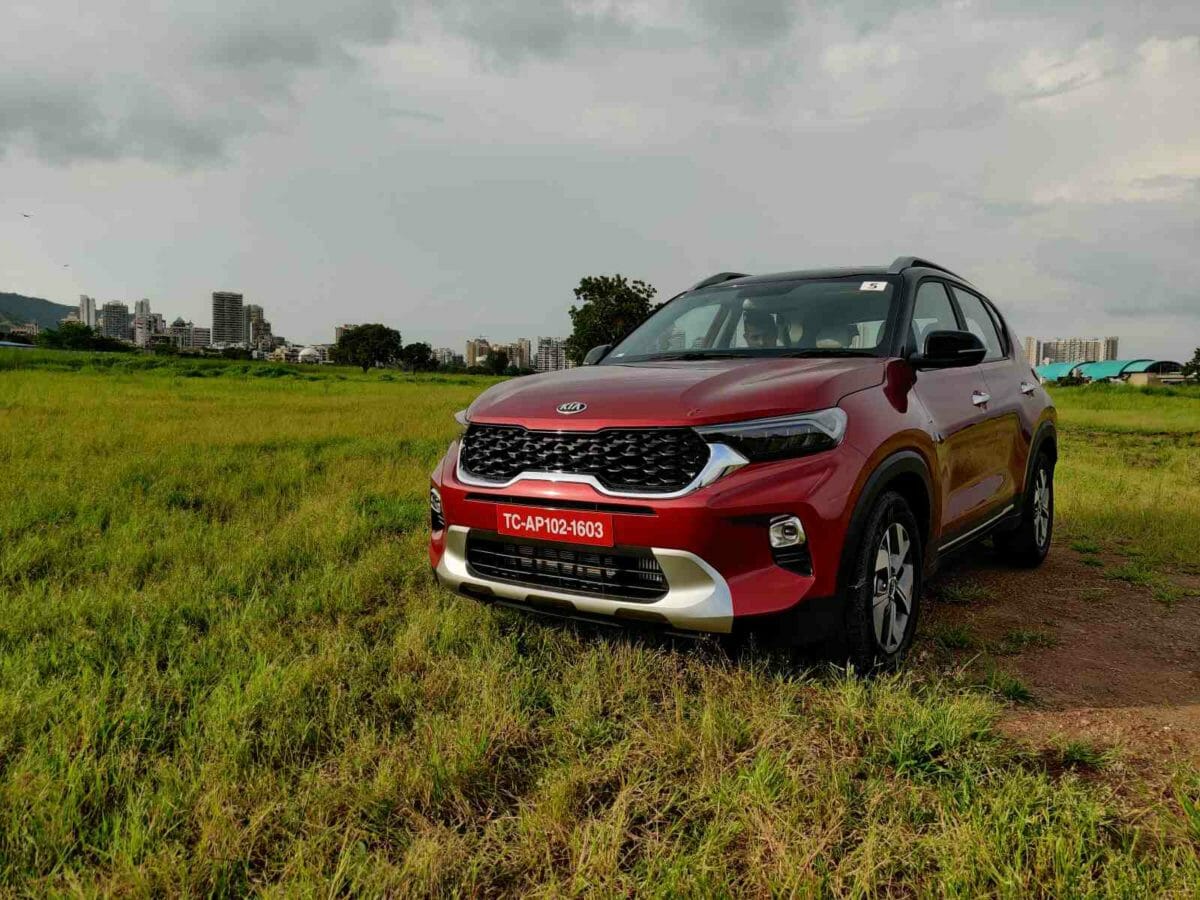 The automatic transmission is a proper AT, which sets it apart from its competition. The gearshifts are butter smooth and the gearbox manages to mask the jerks pretty well. Gearing is a little short when you drive it in manual mode though. Slightly taller gearing could have improved its 0-100 timing. The sport mode, once engaged, adds some weight to the steering but it feels inert anyway. Another thing which makes the diesel AT shine is its improved ride quality. The added weight makes the drive experience a little better than its petrol variants. The ARAI claimed fuel efficiency of the Kia Sonet Diesel AT stands at 19 kmpl and given the right conditions, it can actually manage to touch the respectable figure. The prices aren’t out yet but we expect Kia to price it somewhere around INR 12.5 Lakh.

Shakespeare might have composed the most popular Sonnets but it’s Kia which comes a close second. Kia Sonet’s intentions are pretty clear. It didn’t take birth to be just another offering in its segment, Kia spawned it to rule and decimate its rivals. It is the most feature-packed car in its class and not to forget, the most premium too. Kia is offering the Sonet with a sea of engine and transmission options so there’s one variant for everyone. What Kia did with the Seltos, it is on a streak to do it again with the Sonet. We expect it to be priced between the 7-12.5 Lakh mark and in this price range, the Kia Sonet will come out as a definitive winner.