First off, it’s a quick review, for we don’t consider a short spin of 80 kilometres on the odometer good enough for a review at Motoroids- you may expect a full blown review very soon. I did push the bike as far as I could in this short span though, and decided to share the sights, sounds, smells and surprises the 2013 Kawasaki Ninja 300 threw at me.

Here we go then! 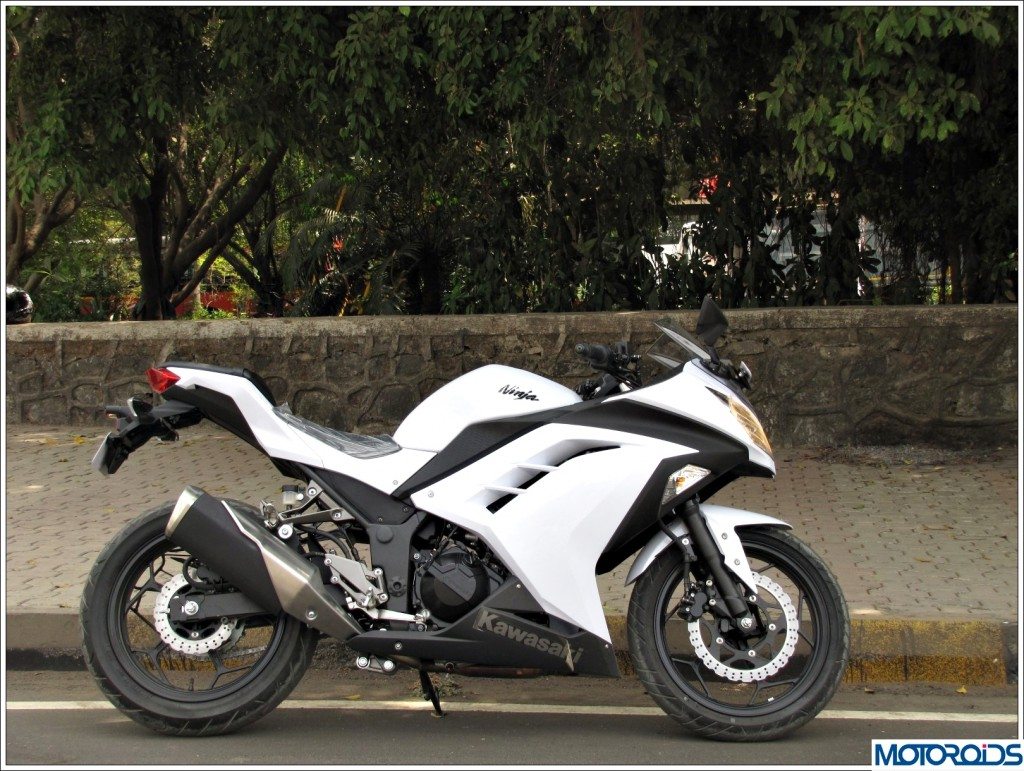 I have seen the Ninjette a million times on the internet and the sharpish, gorgeous styling never failed to impress me. The Japanese mercenary, in the metal, however, completely floored me. As it rolled out of its abode revealing itself bit by bit, staring straight into my eyes – it had me completely smitten. Even though it wasn’t draped in the traditional green Kawasaki robes, dressed in lightening white instead, I was left collecting my jaw from the floor. 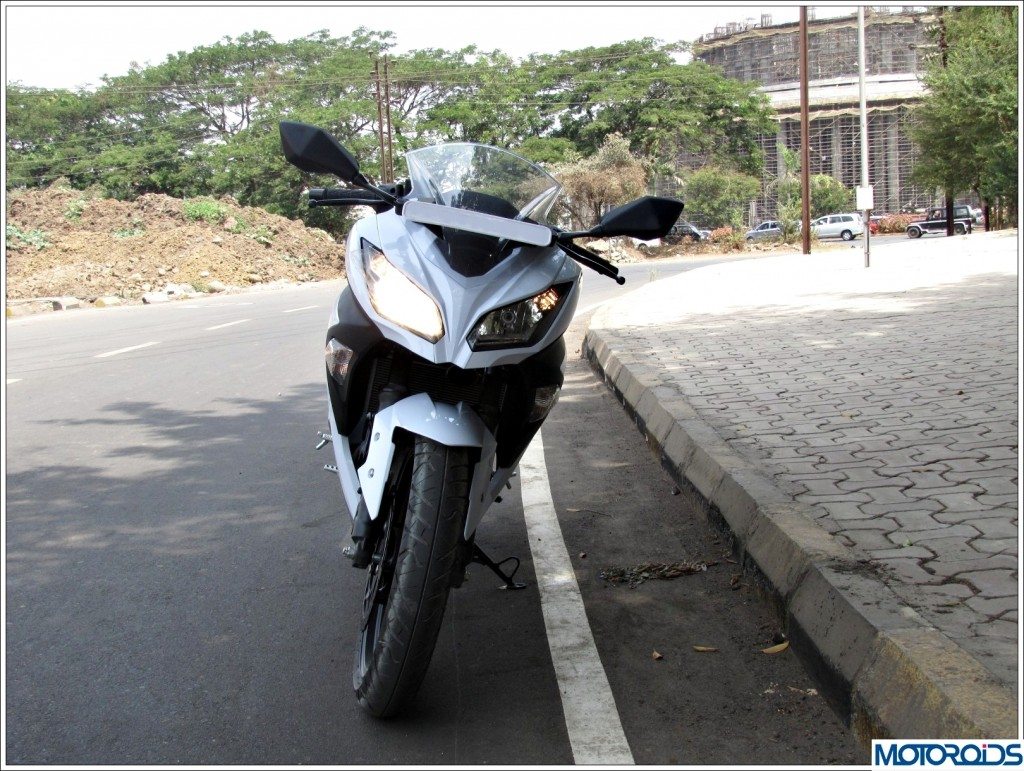 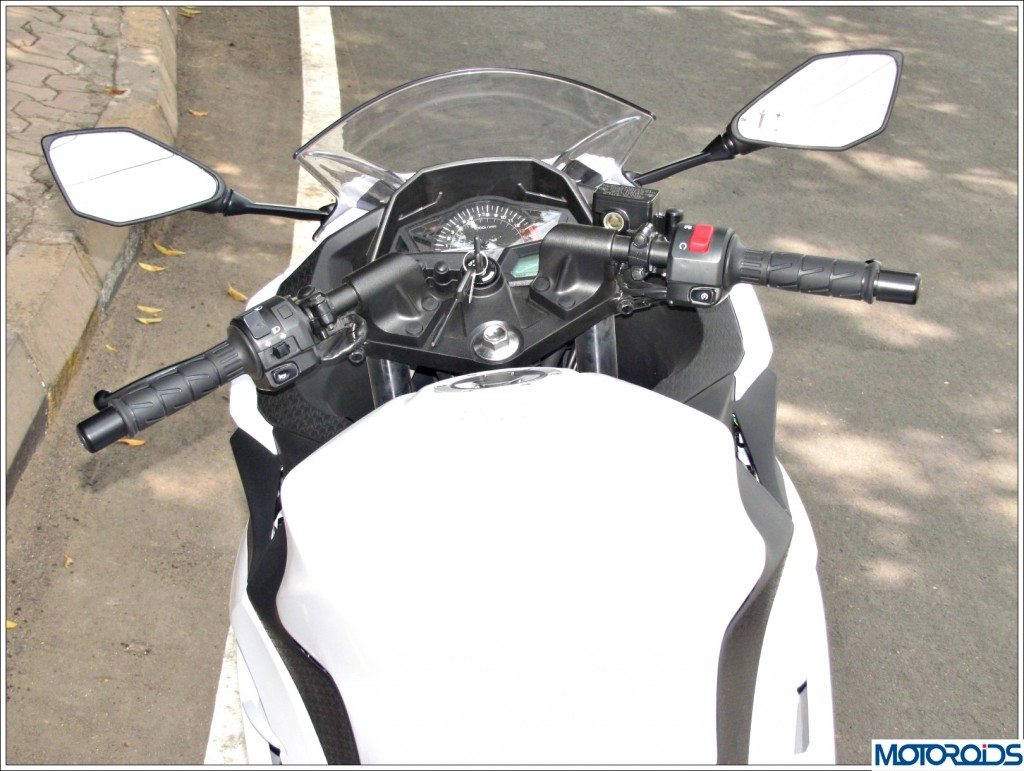 Getting close, I couldn’t help running my palms across the impeccably finished surfaces. The deep gloss finished paint, the matt finish on the clip-ons, even the smallest bolts seemed to be of a fine quality. The rear brake pedal comes in brushed aluminium as compared to the crude looking unit on the now defunct Ninja 250R – one of the very few flaws on a well finished bike. You’d probably need a magnifying glass to find a rough edge on the motorcycle – the only ungainly bit being the saree guard. 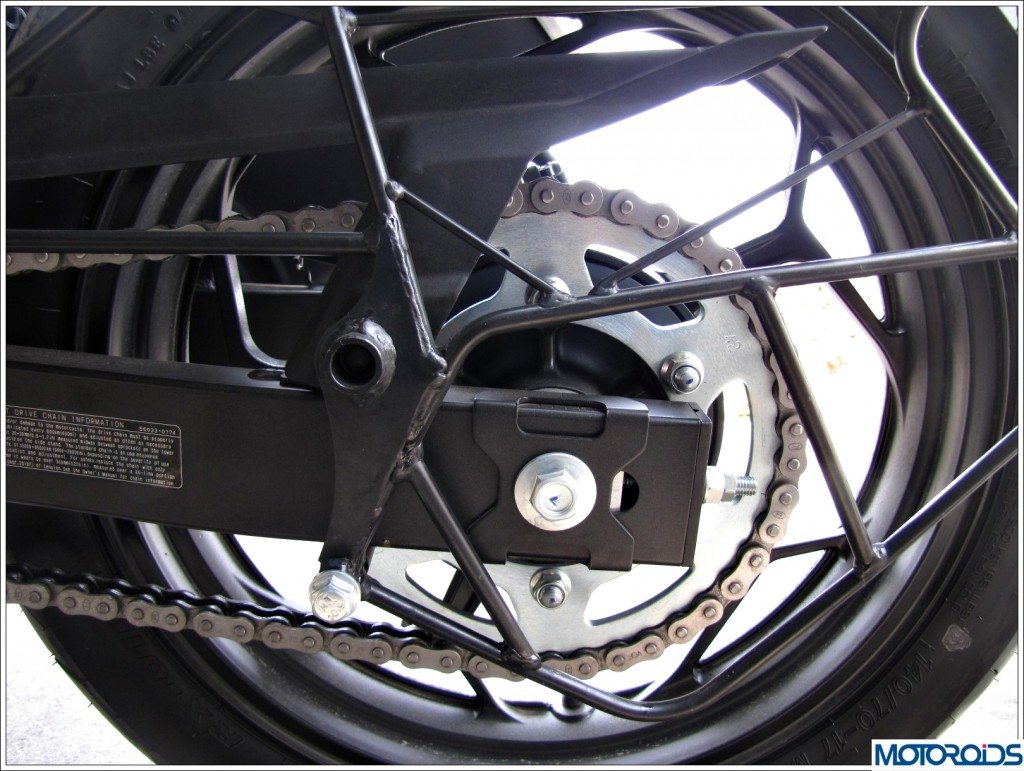 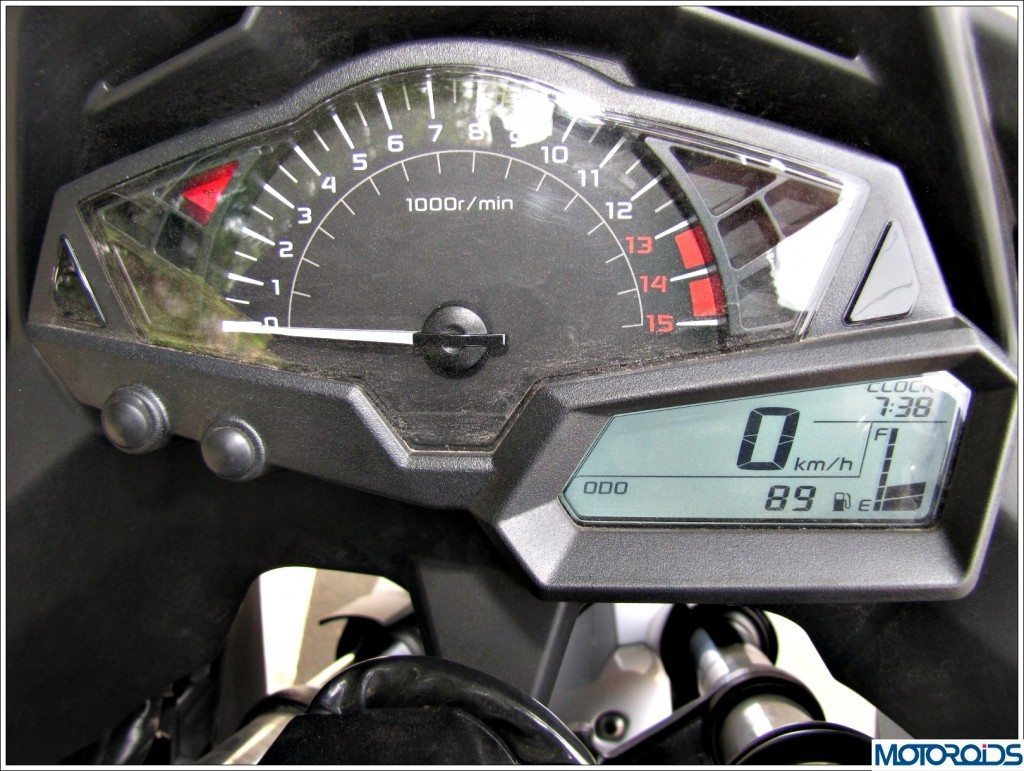 Swinging my leg across the saddle saw me staring straight into the digital dash, which (thankfully) flashes a self-check. Switch the fuel pump on, crank the starter button and the Ninja 300 comes to life with the usual twin pod note. Seat height feels low as compared to the CBR250. You can reach the handlebars without stretching your arms too much, providing a natural and assured feel. Tap goes the first gear and I realize, this is a different beast altogether. The better part of the discovery was the power low down. Whereas the Ninja 250R would get out of bed post 6000 rpm, the Ninja 300 is ready with its boxing gloves at a full 2000 revs less. 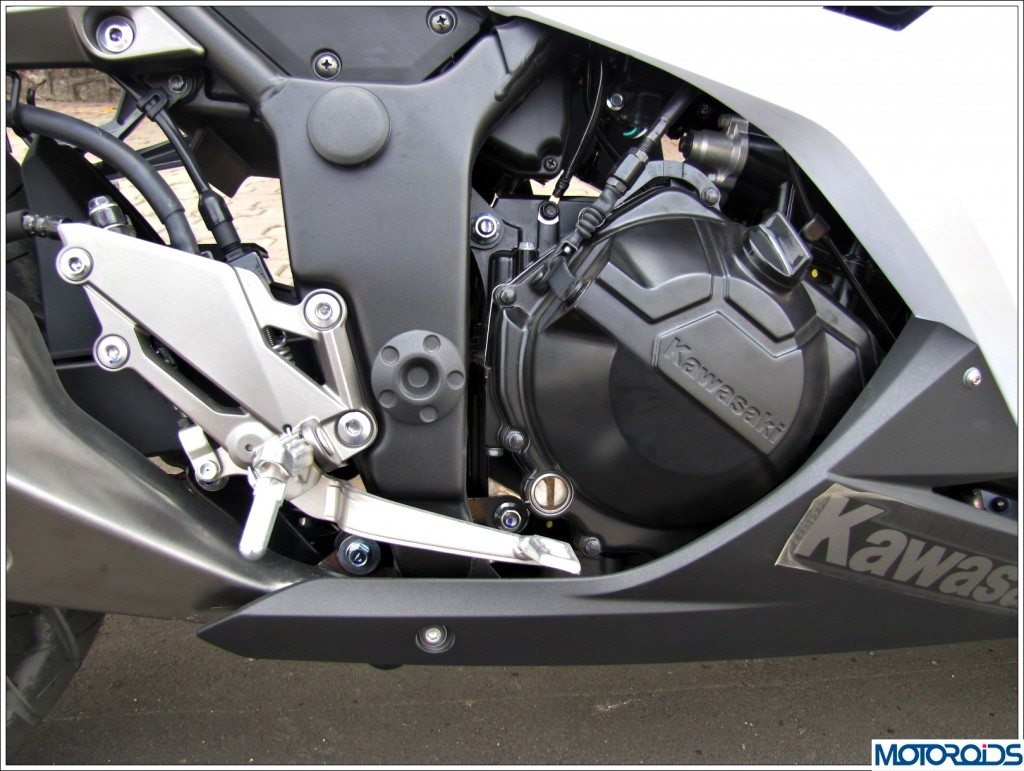 The throttle is as crisp as you’d expect from a modern twin pod mill with the engine begging to be spanked mercilessly. Hit the redline in first, slot into second and the front wheel wants to go air-borne. Though the surge of power is evident on every shift, the second cog would awaken the hooligan in you more than any other gear. As you rev up, the mild babble is swapped by a more engaging sound that emulates a turbocharger wanting to spool every bit of air present on the planet. The gearshifts are a delight and shifts happen with pronounced clicks offering sound feedback. Clutch is progressive and though not as light as the CBR250R wouldn’t hurt your palms in stop and go traffic. The bike feels impressively big, but never unwieldy.

Numbers on the speedo build like those on a stopwatch and 100 kph comes up in no time in 3rd gear. Though I couldn’t measure it quantifiably, but by my assumption, 0-100 kph should take 6 seconds or thereabouts. The Ninja300 pulls with great assurance with power not tapering off even at the far end of the rev range. It hits the 150 mark without any drama whatsoever, and the best part is that you don’t even need to duck in – great aerodynamics. You can just stay perched with your head sticking out and grin within your helmet as you overtake most of the vehicles in a flash. Though I managed to hit 168 kph in top gear, I had to slow down due to traffic, with a power reserve which could probably have given me 15-20 kph more. Talking of cruising speeds in top gear, the Ninja 300 manages 100 kph @ 6800 rpm and 150 kph @ 10,100 rpm. The engine is so refined and rev-happy that even when hitting the redline at 13,000 rpm it shows no signs of resistance- I was just floored by the smoothness. If put to the task, this powerplant would happily keep spinning at 150 kph from dawn to dusk without breaking a sweat. It does sound a tad less exciting than the Ninja 250R at higher revs- thanks to an even more refined motor. Also it’s worth mentioning that the heat channeling has been reworked to great effect. At no point of time did I feel the heat bothering me around my toes or shins- be it trundling along after a high speed session or just hitting the wind at over 150 kph. There is also an ECO indicator which flashes on the dash when fuel consumption is being optimized. It used to come up when riding at 75 kph in top gear, hit 76 and it disappears. Also happened a couple of times even while cruising at around 90 kph- but when going light on the throttle. 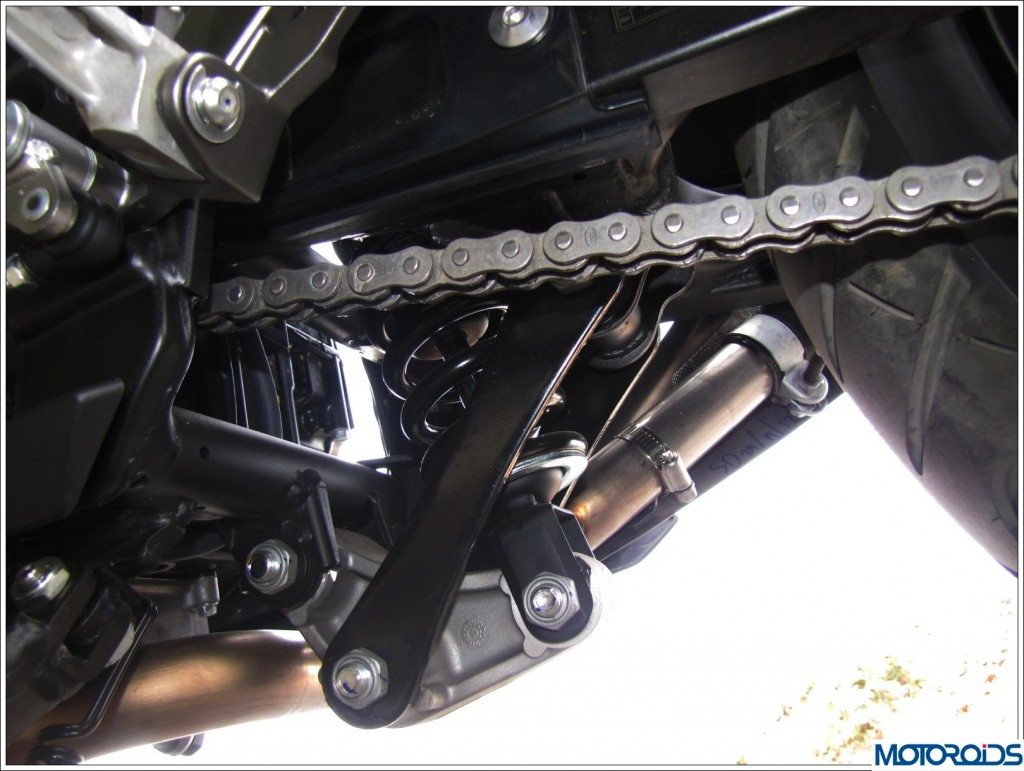 The Ninja 300 feels like the Rock of Gibraltar in a straight line- numbers on the speedo just don’t matter. But high speed corners made me a bit nervous- didn’t get the typical tarmac digging feel that I’ve experienced on the R15 and the Duke, particularly the 140 section rear giving that slight oversteer feedback. Add to that the apprehension of crashing a shiny new bike with the spare prices smashing through the roof made me hold my horses. How good are the IRC Roadwinners? Ninja 250R owners- please apprise. The suspension as usual is on the stiffer side and the bike somewhat jitters going over bad surfaces. 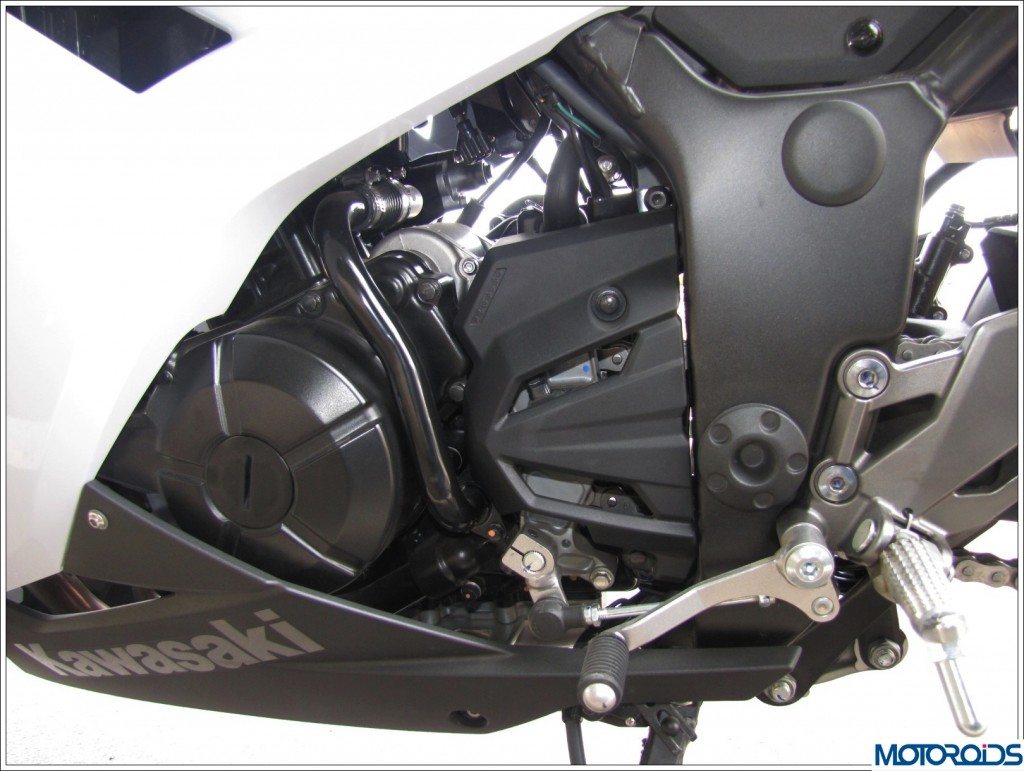 This indeed is a surprising inclusion for a 300cc motorcycle, but nonetheless a welcome addition. Till date I’ve only heard about slipper clutches and their advantages, but finally got to experience the technology only found on larger displaced motorcycles. Initial apprehension made me go gentle on downshifts vis-à-vis the engine revs, but once I got a hang of it- I started doing it regularly and to somewhat extreme levels. Riding at 100 in the sixth gear, and fast downshift to third- and voila! No signs of abrupt engine braking or the rear tyre squealing for traction. The engine sheds those revs in a hurry for a second or two as evident on the tachometer and would build up revs again to equalize the momentum of the motorcycle. Would indeed be a blessing when you ride the N300 hard into the corners. Just so awesome! 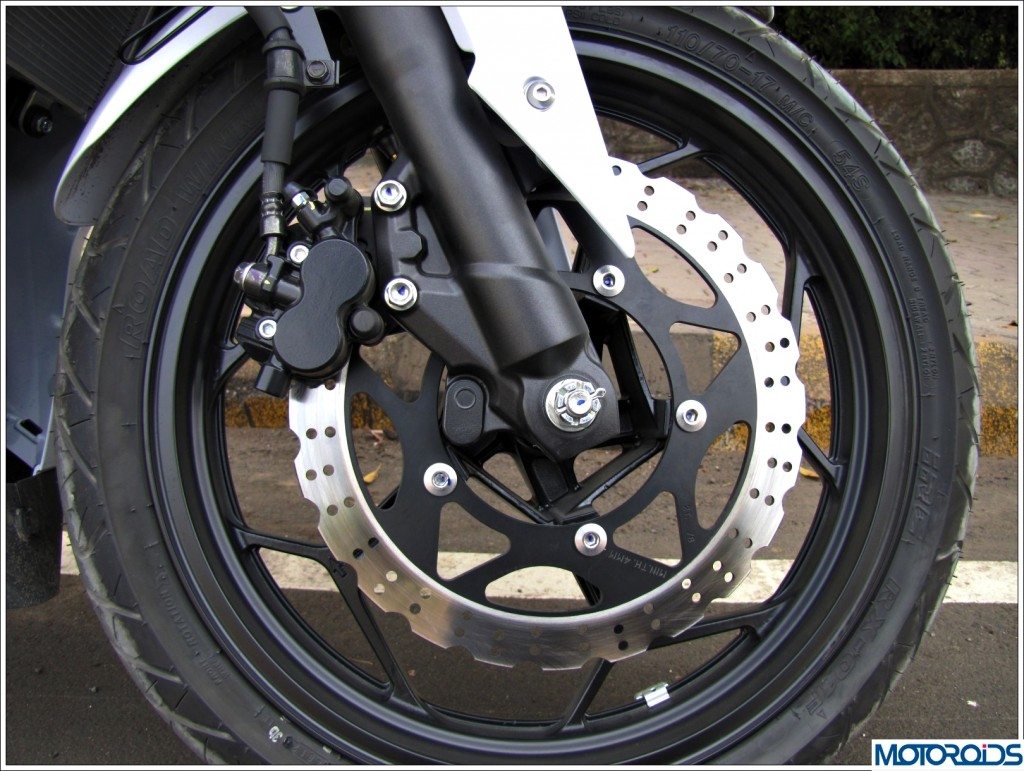 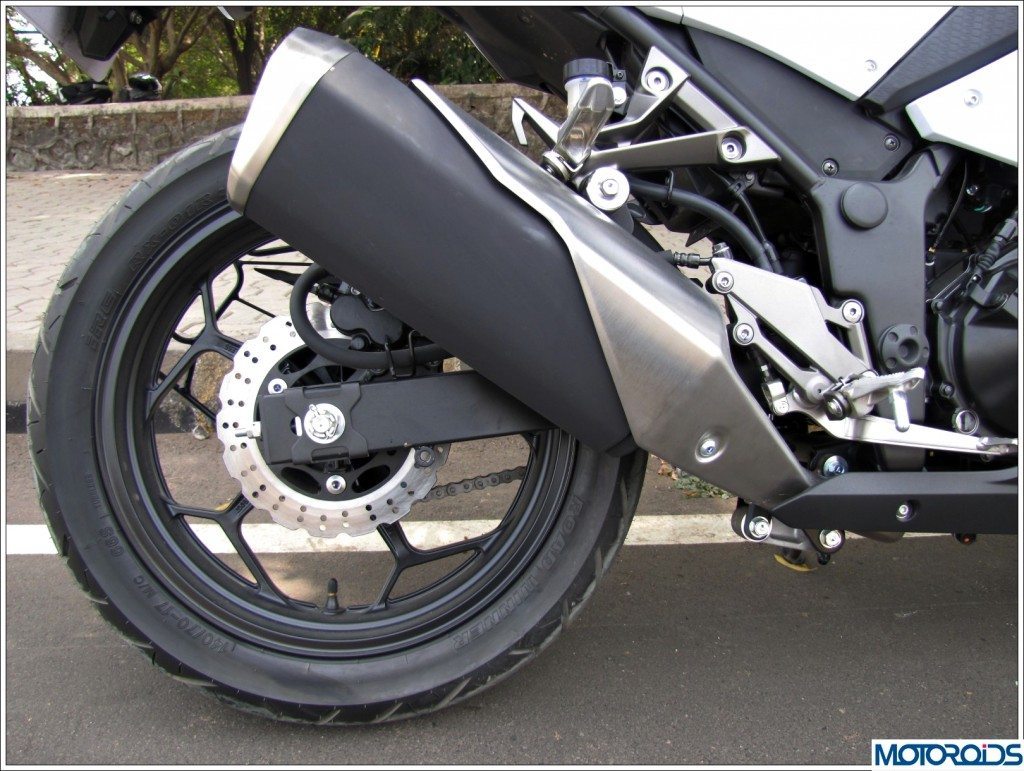 The only disappointing factor on the new Kawasaki Ninja 300 were the brakes. I was expecting much better brakes. Whereas most brakes today react even with a pull of your middle finger on the lever, the brakes on the Ninja call for a harder squeeze and practiced modulation. The feedback from the front is not very precise and the horsepower simply overwhelms the braking ability and high speed braking may have its own heart-in-mouth moments at times. Though I was told that maybe the brakes are new and would need some running to break in (I wish it was true), but I haven’t found such a case in other bikes. And with the ABS version not slated for India, the only option would be to get used to and adapt to the stopping ability of the 300. 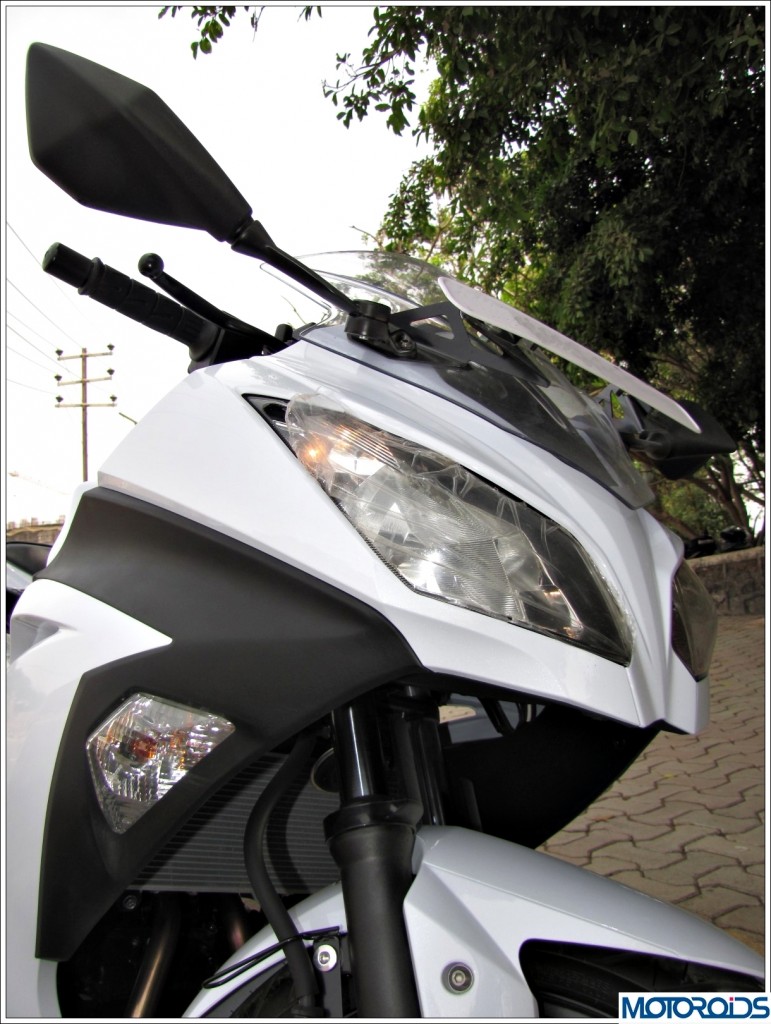 The Ninja 250R was already a remarkably well finished motorcycle with performance to go with the delightful visual package. The only issue being the dead low end grunt and a passive mid-range, but loads of top end excitement. The new 2013 Kawasaki Ninja 300 takes the quality factor one notch above and a revised engine churns out 6 more horses over its predecessor with refinement that makes it a delightful experience every time you swing that needle off the redline. The bottom and mid-range has been worked to satisfactory effect considering the performance it offers without sacrificing bit at the top end 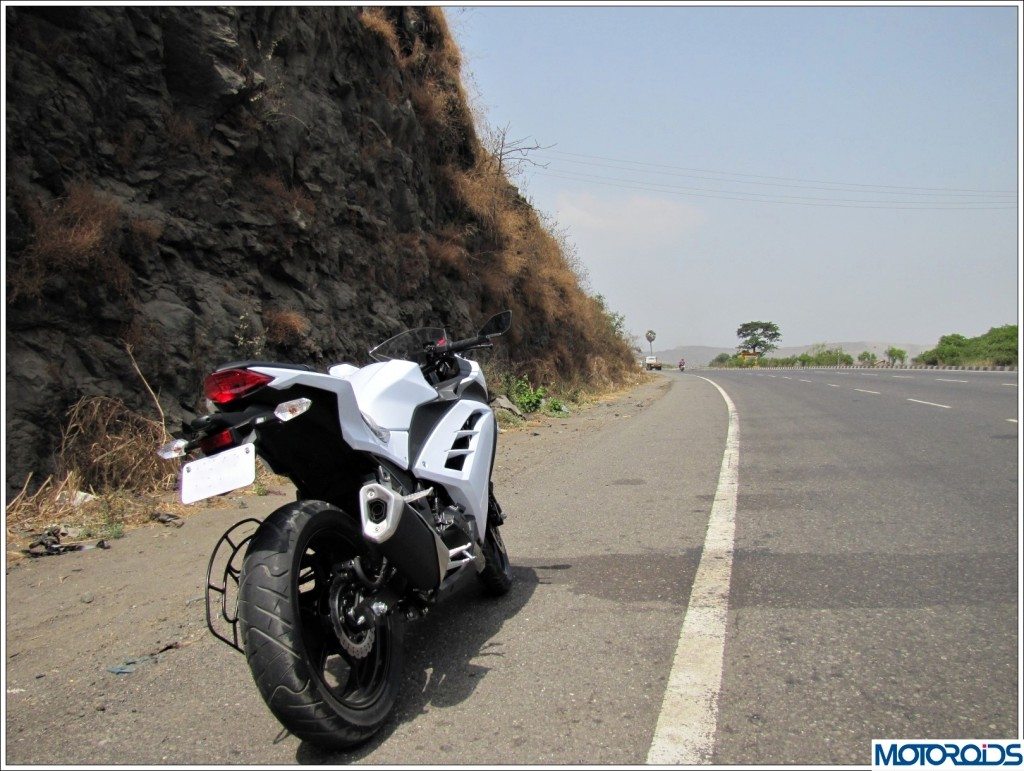 It’s a surefooted missile in a straight line though slightly let down by not-so-grippy rubber and somewhat spongy brakes which need some getting used to. Tyre options are available aplenty if you are ready to dish out some extra money. But overall, it’s a marvelous piece of machinery- an absolute winner. The only stumbling block being the price shooting over the 4 lac figure in Mumbai, but if you disregard the price (not so easy to), the Kawasaki Ninja 300 is definitely something you would love to have in your garage. At the given price, it makes absolute mockery of value-for-money factor, but it would never let you down when you’d wish to let the good times roll!