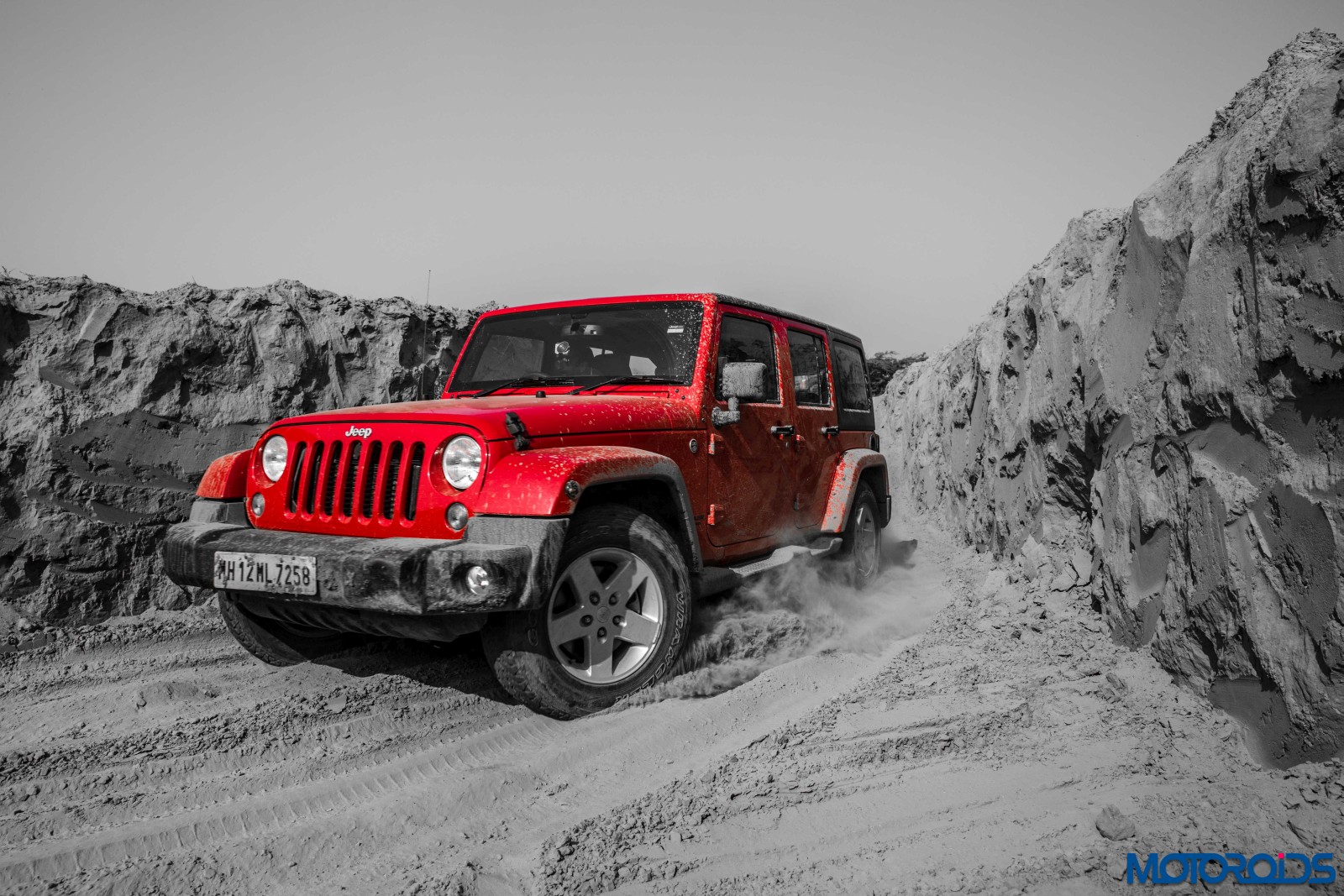 Jeeps are to off-roading what Xerox is to photocopying. It has come to define off-roading for a substantial chunk of car buffs across the world. The brand name has almost become the category name for soft top bare bone off-road machines which represent freedom and go-anywhere capability. The brand has also had an indelible influence on the world history. Former US President – Dwight Eisenhower went on to say “The Jeep, the Dakota airplane, and the landing craft were the three tools that won the war” when he was serving as the Supreme Commander of Allied Forces. 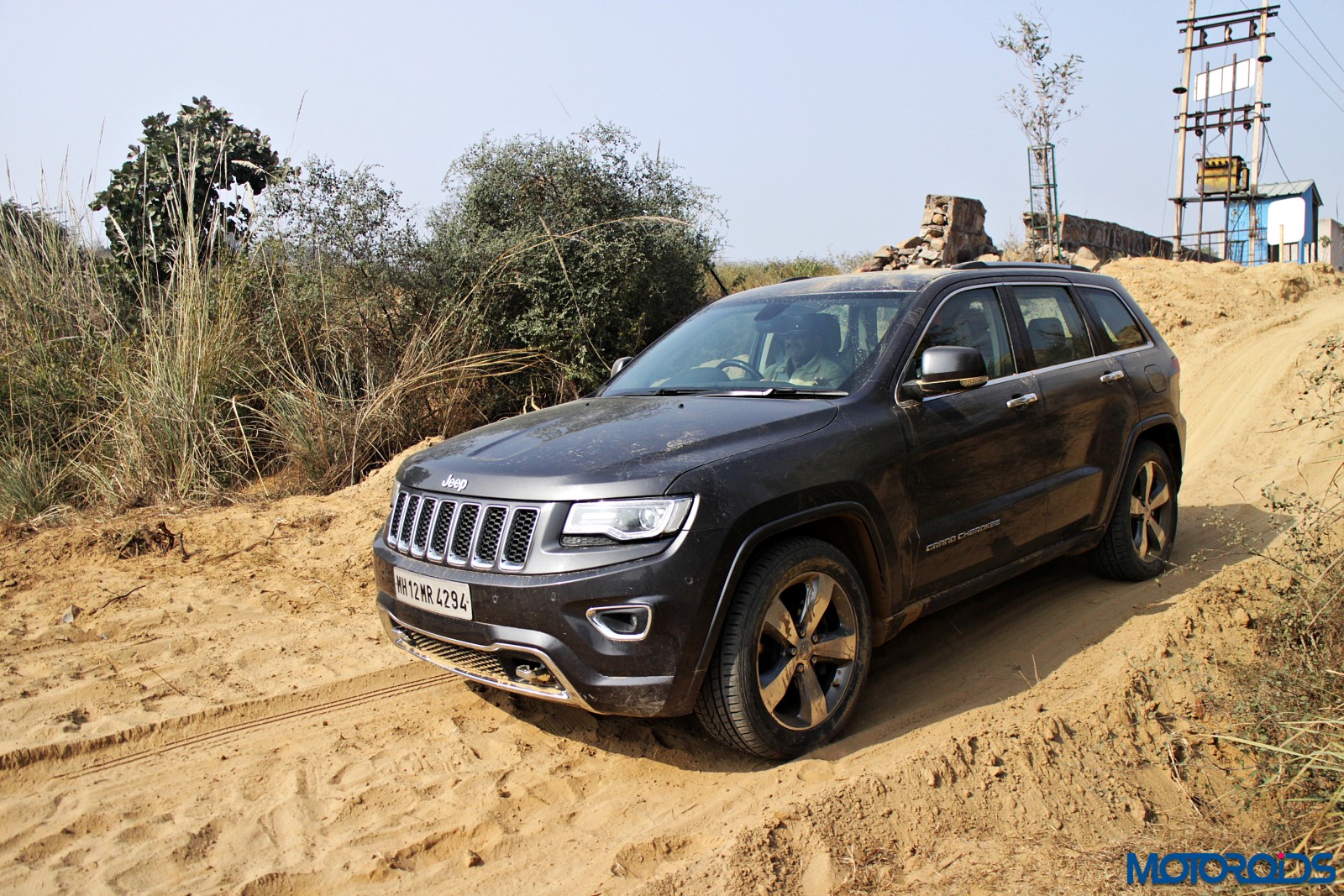 A brand trusted and verified by the most powerful man in the world definitely has a huge following worldwide. Gauging the popularity of the brand in India, FCA – Fiat Chrysler Automobiles which now owns the JEEP brand brought the JEEP vehicles to India this year. You can read all about the brand’s DNA and capability in our Jeep Grand Cherokee review. Recently we got another chance to drive some Jeep models off the road on a special course. Sure, we did come back impressed. But what was the experience like? Let’s find out. 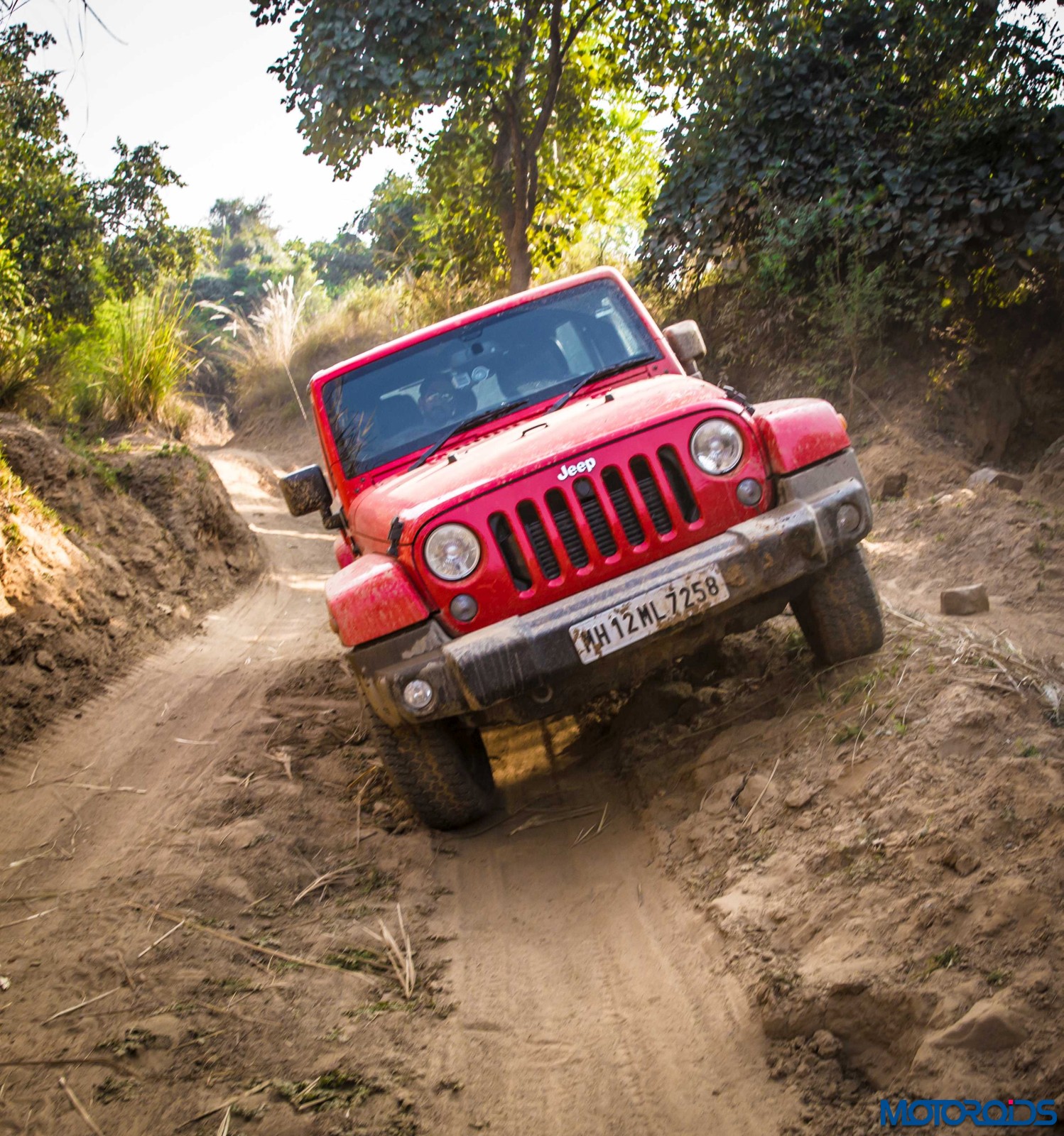 It was a bright Saturday afternoon and I had to find my way through the confusing country roads of Bhandwari village to reach the beautiful resort where the off-road event was organized. And there they were – a red JEEP Wrangler and a Black JEEP Grand Cherokee SRT, looking splendid parked on lush green lawns. My jaw dropped at the sight, suddenly my accent was all American and I ordered a fat juicy burger at the live kitchen. 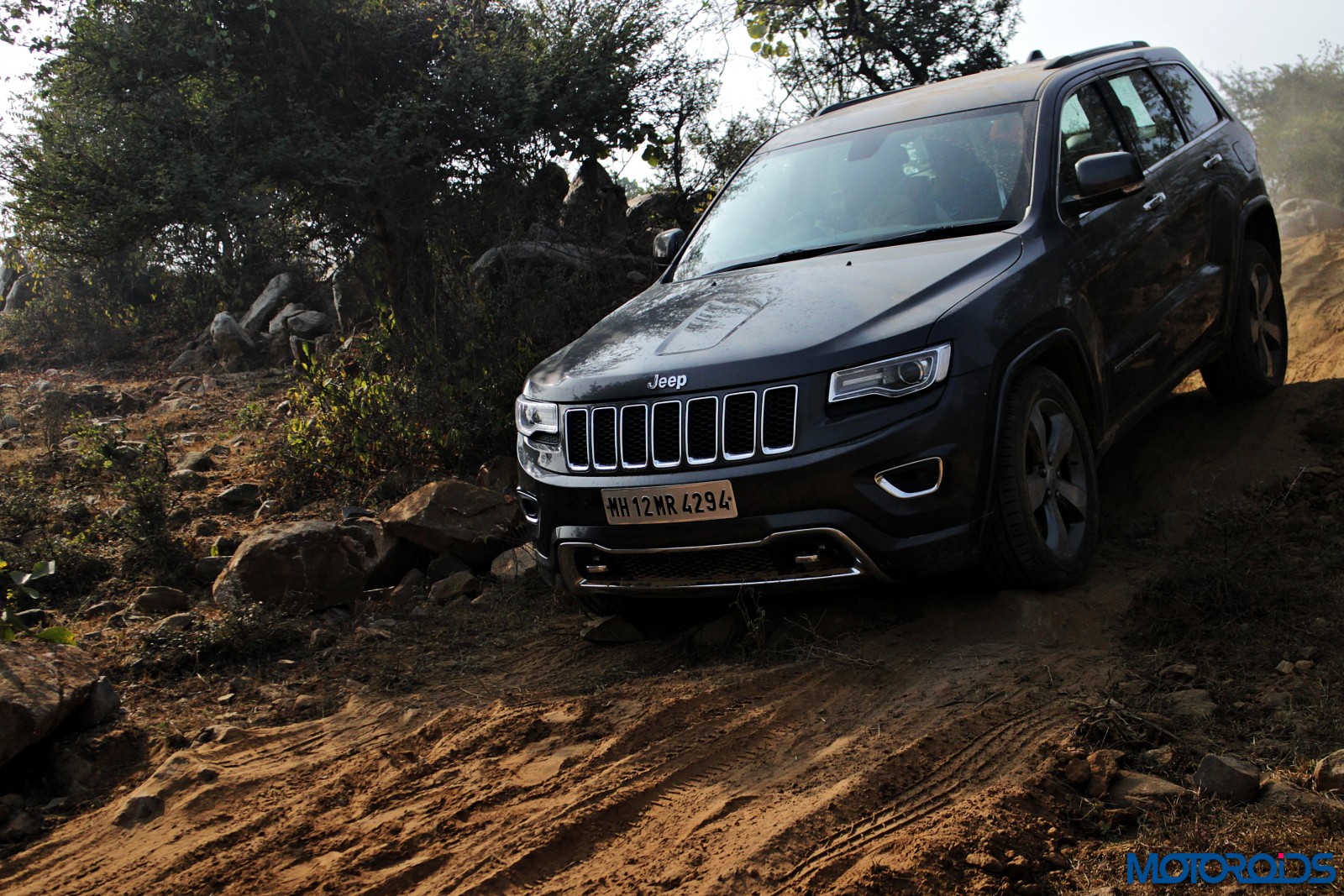 As I waited for the first lot of journalists to experience the JEEPs, I got inside the SRT and was immediately welcomed with generous luxury. The big SUV had all the features one could want and more. Not only the interiors were sumptuous, the car looked stunning from the outside. 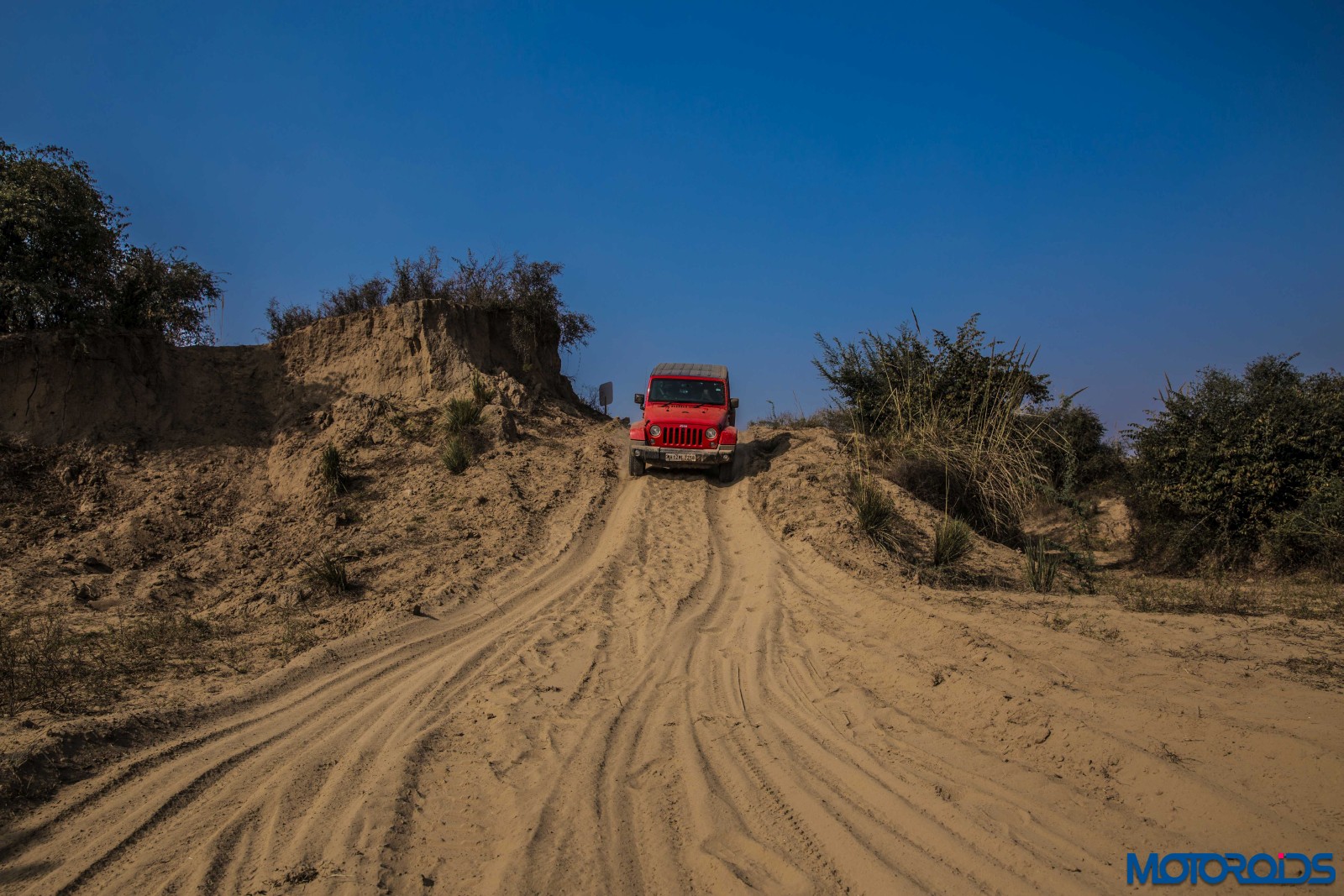 Soon, the wait was over and I got behind the wheel of JEEP Grand Cherokee (Summit variant). Now I have been behind the wheels of older versions of JEEP Grand Cherokee. When I was in the US, two of my friends had these bad boys. However, they were a little crude compared to what I was seeing here. The art of making cars has evolved and the luxurious feel has gone up a couple of notches over time. 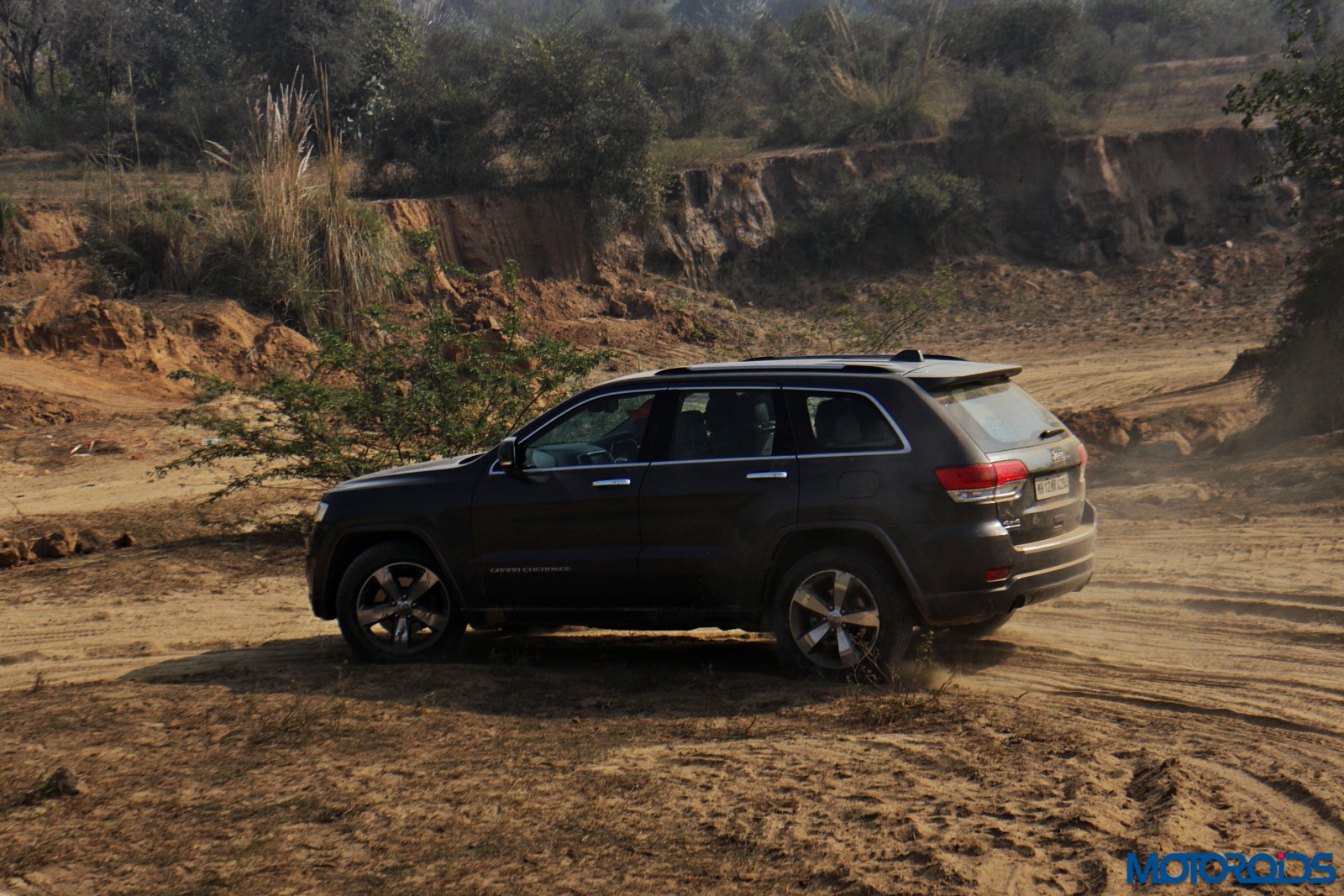 In a few minutes, we set off on the custom track. The first section I hit was a steep decline with deep, powdery sand. I was asked to put the car into sand mode and turn hill descent control on. Now, I have driven through quite a few of these off-road courses in several SUV’s including the Audi Q5, Nissan Patrol, Ford Endeavour, TATAHexa and a few others. Every time before this, I would do some work myself with respect to controlling the throttle. This time, with the JEEP, I let the car do everything. 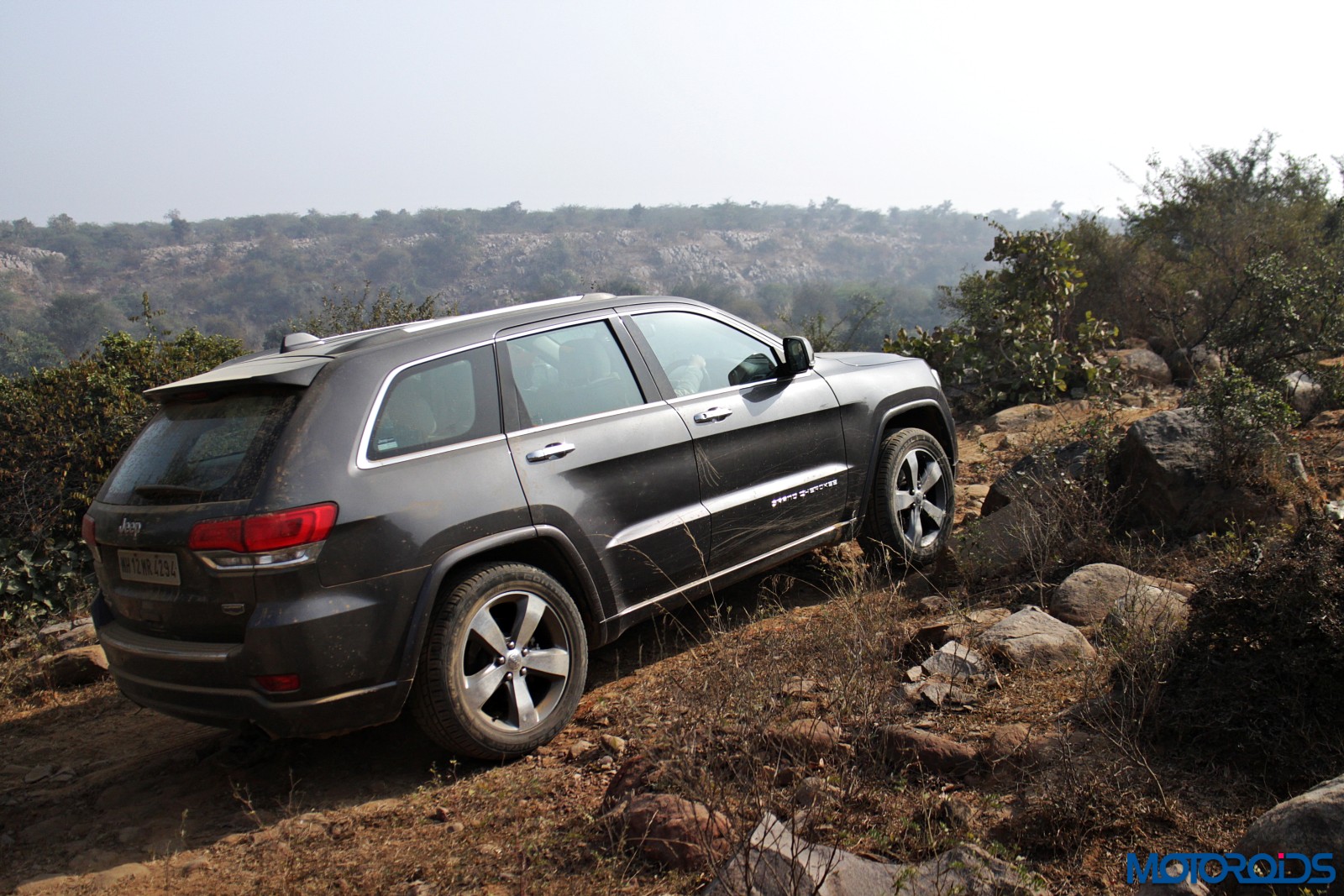 The SUV has a Selec-Terrain® Traction Control System with 5 modes – Snow, Sand, Mud, Rock and Auto. In addition to this, you can select 4WD Low and Hill Descent control. I was off the brakes and the accelerator. With hill descent on, one can choose the maximum speed. This max speed applies to the situation where there is no throttle input from the driver. I set the max speed at 7 km/h. As we started to descend, we could feel all the computers working. The brakes and throttle were doing overtime with wheels locking and unlocking in quick succession. 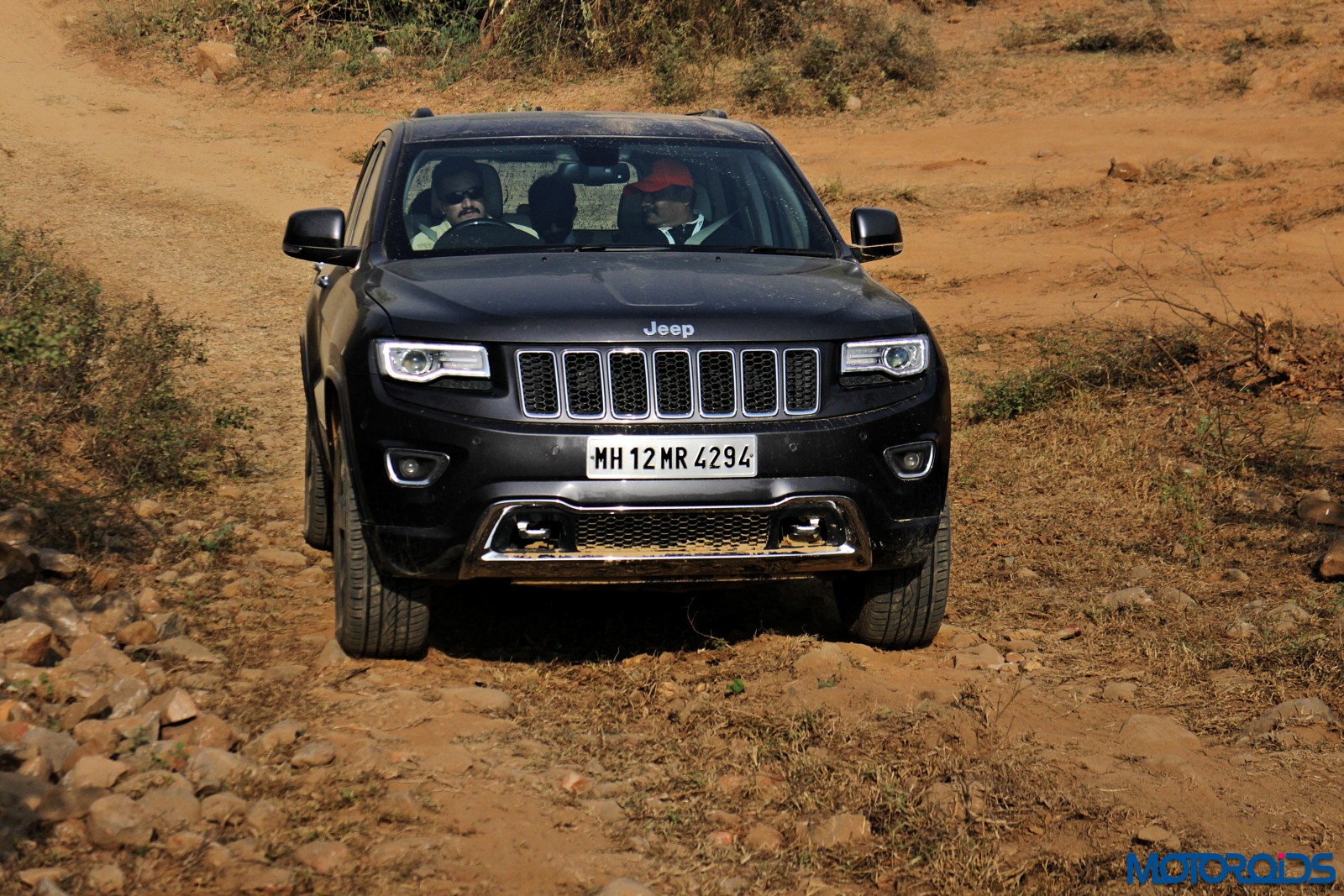 Even with a slippery surface underneath, the jeep crawled in mighty impressive manner. The traction control was working overtime to work the Quadra-Drive II 4×4 system. After disposing of a couple of steep inclines and descents, we came to the rocky section of the course. 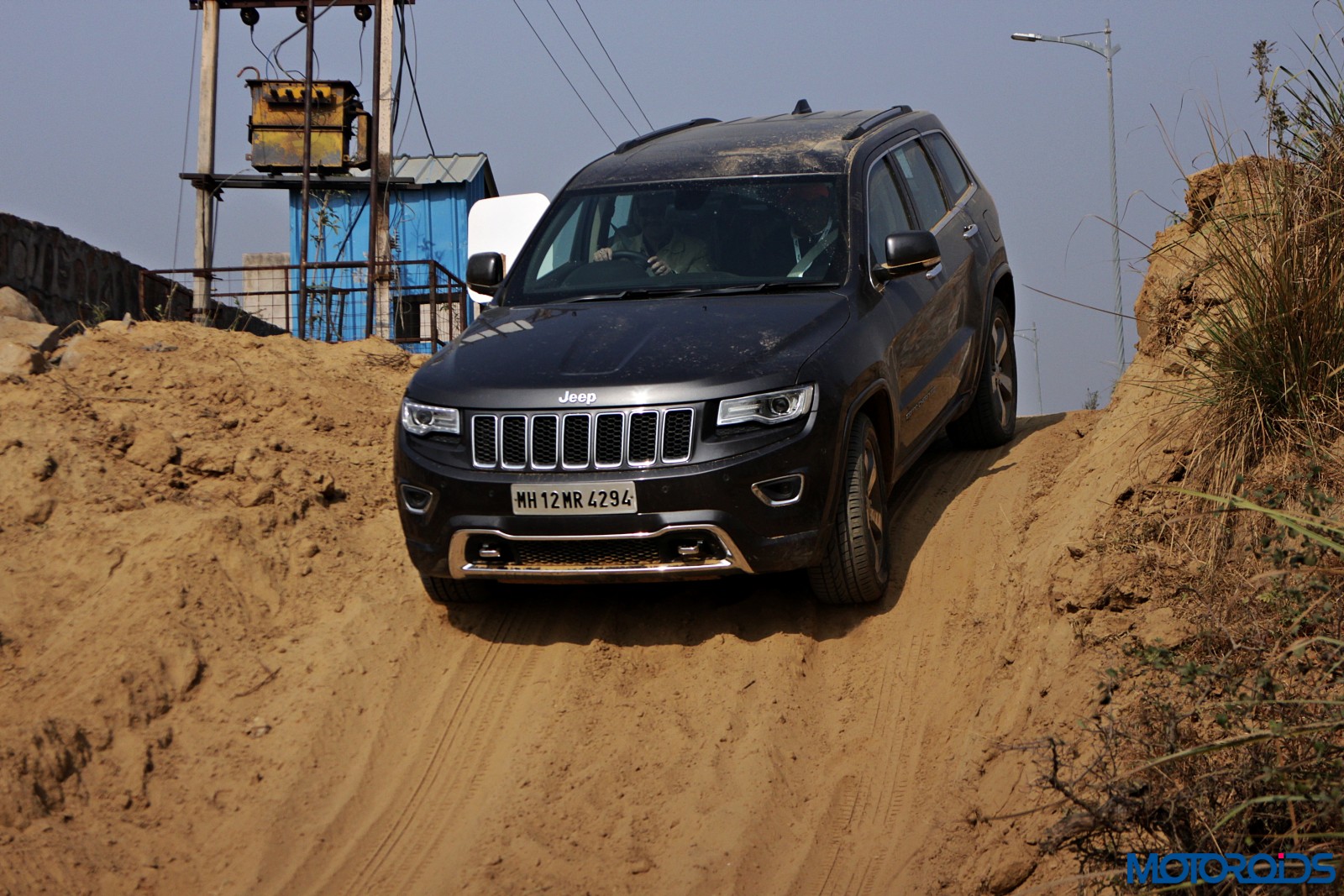 It was a natural rocky trail, something similar to what we are more likely to see on a real life off-road adventure. We came to a halt, switched to Rock mode and as we snaked through the narrow path, what I noticed was that the ride was still surprisingly supple. Under Rock mode, throttle and braking are managed very precisely so that the wheel with most traction takes control in moving the vehicle. The front axle is locked and power is distributed evenly between the front and rear axles. With so much going on under the hood the climb was a cake walk and the large SUV went up like a mountain goat. 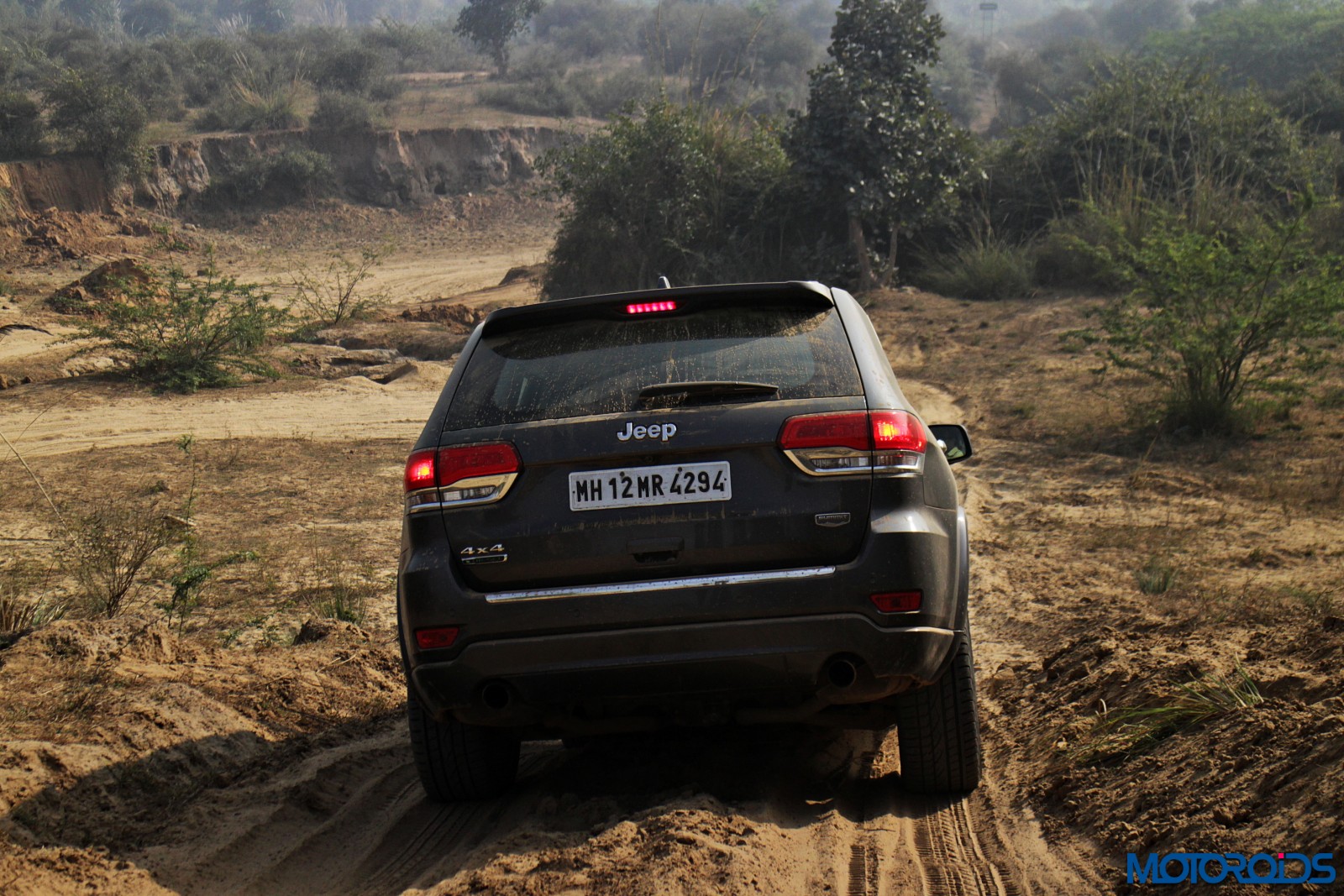 At the top of the hill there was a sharp right hand turn and this humungous beast took that turn pretty easily. In fact I never had to make a three point turn at any of the tight corners. This relatively short turning radius would really make this American beast very usable in our congested streets. Overall, the JEEP Grand Cherokee is a very capable off roader with a nice touch of luxury and comfort. This would be a great tool for a drive into the unknown. 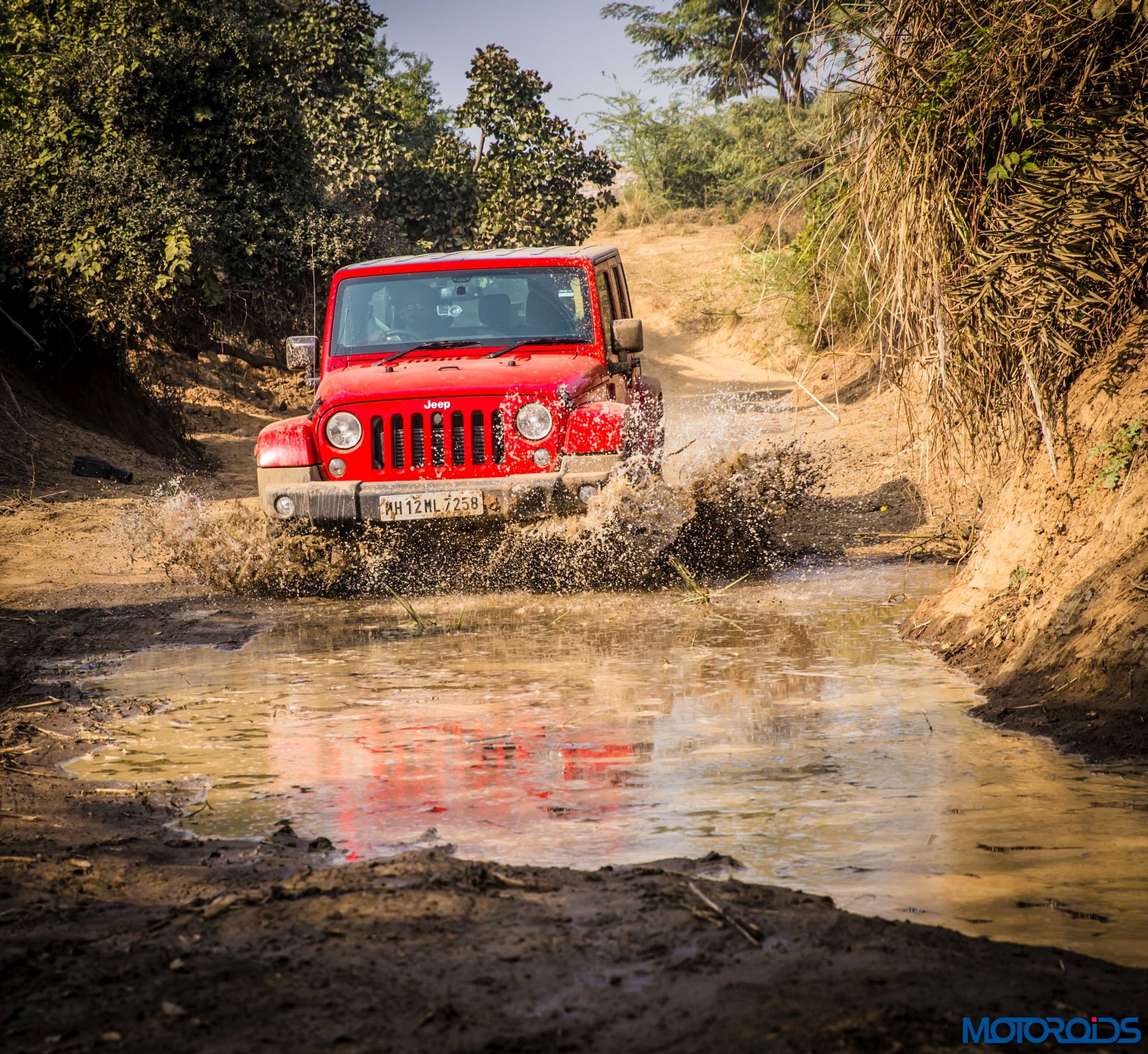 After we were done with the Grand Cherokee, we had some lunch and hopped into the more hardcore JEEP Wrangler. It’s a direct descendent of the original Willy’s JEEP. Needless to say, it is a more capable off roader than its more luxurious cousin, the Grand Cherokee. So the interiors are not as swanky and luxurious and give a very utilitarian look. However, they are well laid out and very functional. 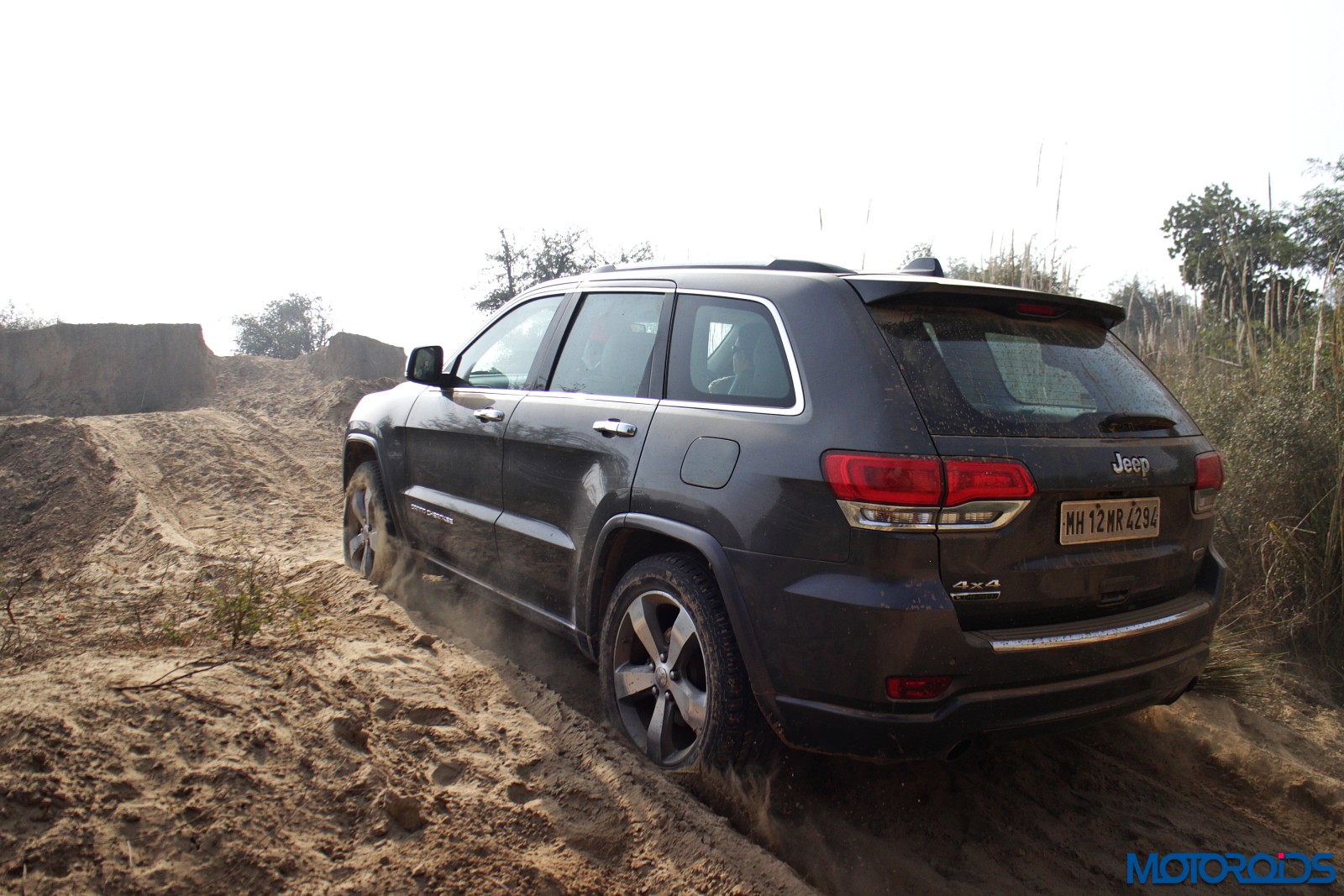 Soon we were back on the same trail as we were on the Grand Cherokee. It was easier to handle the smaller SUV. What we really liked was that the Wrangler’s braking and throttle were not as aggressive as that of Grand Cherokee. This time we did some sections we did not do on the bigger sibling. Most significant of these was the mud section. 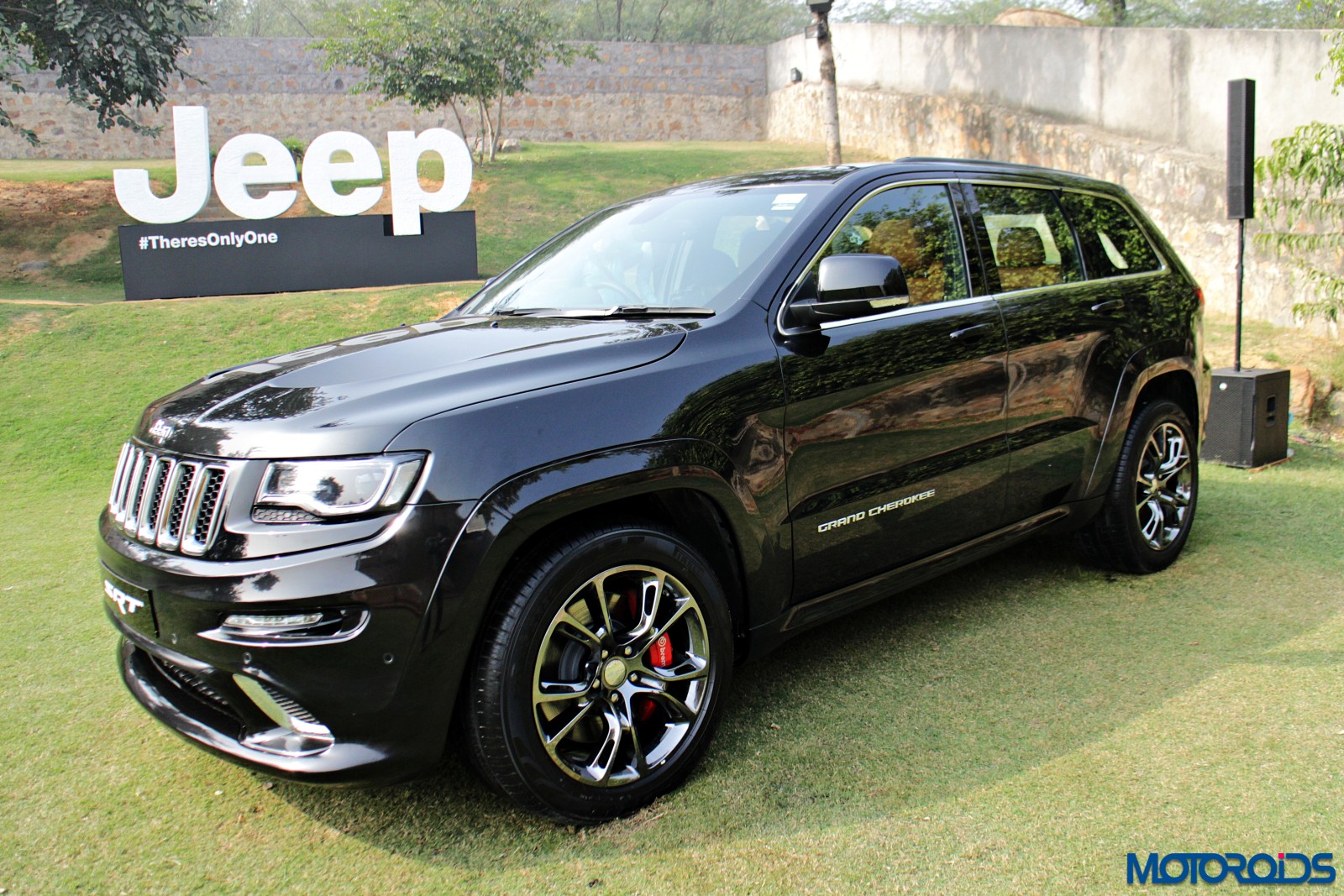 Now, a soiled JEEP wrangler splashing mud is probably the most suitable poster material for mud-plugging aficionados, and the Wrangler really lived up to its reputation rather effortlessly. The Grand Cherokee wouldn’t mind if it was not taken off the road. But if one buys a Wrangler and does not hit some uncharted territories, I think it would count as blasphemy. 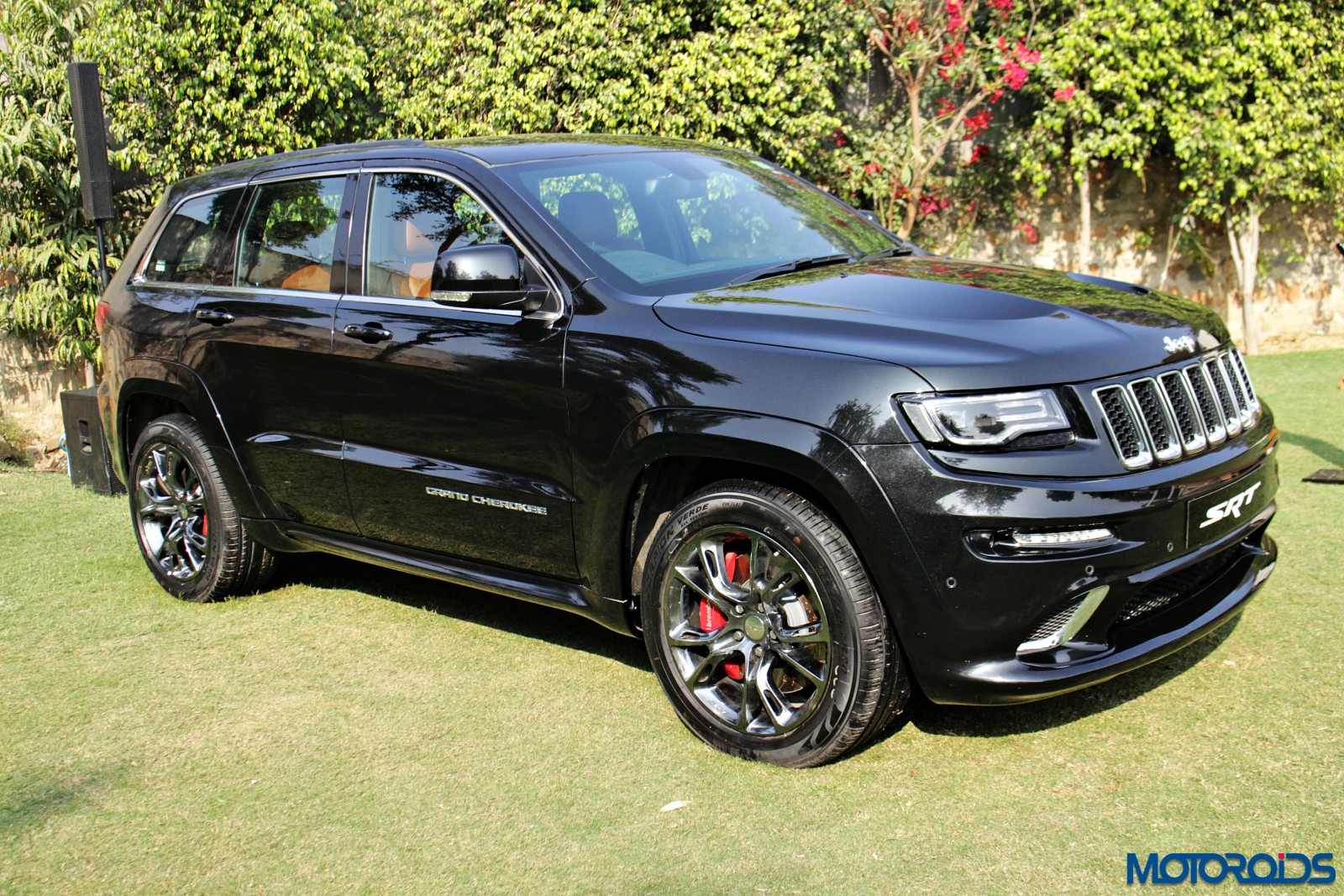 While other brands do have their own offerings with decent capabilities off the tar, hitting the countryside and getting the rubber soiled in a Jeep has a charm which couldn’t quite be matched. Jeep has a rich heritage of creating impeccable off-road machines, and you could feel the passion that has been infused into these machines every time you take them out for some off-road fun. As the two Jeeps weaved their charm around me and kept me delighted through the day, it was rather saddening to get off the duo’s wheels. The memories of this experience will stay fresh in my mind for a long, long time, though.