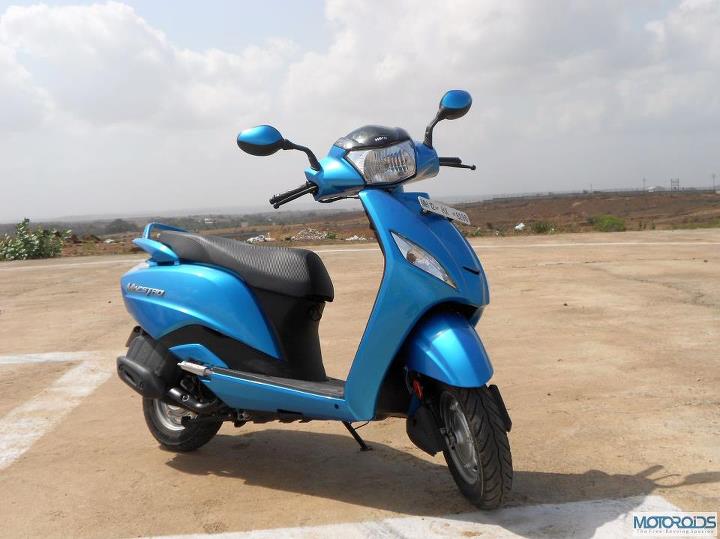 A few years ago, Hero MotoCorp, the erstwhile Hero Honda, came up with a new offering in the automatic scooter segment. The scooter, which borrowed a lot of mechanicals from the last gen Honda products, could have easily been a success story. Come to think of it, you can’t go too wrong if you are busy playing with Honda scooter parts bin. It may be noted that the Activa has largely been responsible for the success that Japanese two wheeler maker is enjoying in the country. True, the Unicorn, Twister, Stunner and Aviator too have been fairly successful but it won’t take a genius to conclude that it is indeed the humble Activa that has made Honda two wheelers a success story in the country. Coming back to Hero’s first offering in the gearless scooter segment, the Pleasure looked all set to grab a chunk of sales from the Activa but that was not to be. Thanks to a marketing campaign that literally shouted at boys to stay away, every self respecting male decided to keep him away from this scooter. Suddenly, Hero Pleasure became synonymous with pink and the very sight of a guy riding a Pleasure made everyone question his sexual orientation. As for girls, well, let us just say that they could not find the new scoot to be as feminine as the TVS Scooty Pep series.

Sometime after the Pleasure was launched, Hero and Honda decided to split ways and the divorce spelled an end to one of the greatest partnerships ever. Hero, however, is not all on its own as it will continue to get technical assistance from Honda as alimony till 2014. Now, Hero MotoCorp has finally seemed to realize that a ‘female specific’ product is not the easiest way to capture the automatic scooter segment. This has finally led to Hero launching a scooter to target a wider audience and hence, came the Maestro.

It may be noted that Hero wishes to target Honda Aviator with the new Maestro. However, the Maestro, which might be a male specific scooter like the Aviator, has more in common with the Activa rather than with the arguable more masculine Aviator.

We decided to take the latest non-geared offering from India’s largest two wheeler manufacturer for a spin and spent a reasonable amount of time trying to understand the Maestro. 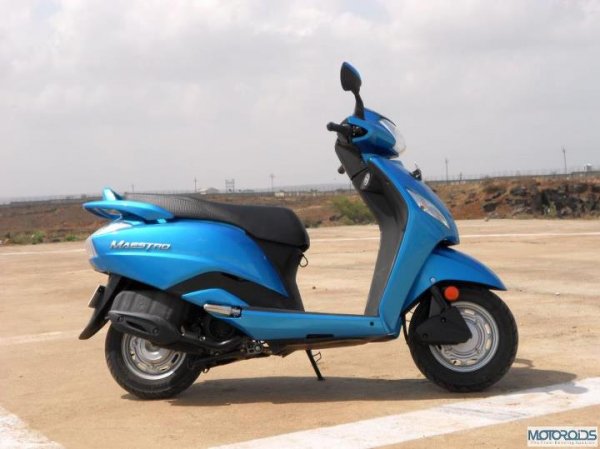 One look at the Maestro, and you will be quick to remark that the scoot looks W-I-D-E. Don’t get me wrong here as the Mestro doesn’t feels out of proportions. However, unlike the Pleasure and like the Activa, Maestro looks like how a full grown scooter should and appeals more to middle aged people rather than college goers. The new Hero scooter gets a large and stylish headlamp and Hero has done a really neat job with including a mini flyscreen that runs just above the headlight. The other neat touches are the half body coloured rear view mirrors that come with chunky stalks. One of best bits of the Maestro’s styling is the very trendy instrument panel. The front also houses the indicators, which in design form, seem to have been inspired by those pyramidal units on the Karizma R. The dash gets an analogue speedometer along with a digital display. This is not all as the scooter becomes the first offering in its segment to sport a tripmeter. The digital display also gets a bar type fuel gauge and an odometer. Yet another feature is a service due indicator in the digi display. In the side view, the scooter looks handsome and while it surely looks conservative, the Maestro has just the right curves to avoid it from looking bland. The Maestro gets 3D logos that run along the side panels. The scooter also gets aluminium foot pegs that further enhance its aesthetic appeal. At the rear, the Maestro has a large tail lamp cluster which looks like an evolved species of that on the Activa. The Maestro we had was dressed in Electric Blue and I won’t be exaggerating if I say that it looked a lot fresher than the cousin from Honda. 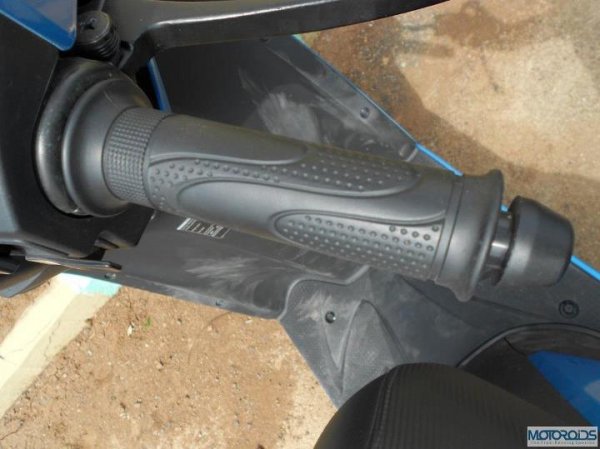 The Maestro has one of the longer wheelbases in automatic scooters segment and along with the wide and well bolstered seat, the scooter can easily seat two full grown occupants in reasonable comfort. The foot board is long enough to accommodate a bag of vegetables or two. However, the underseat storage, which is reasonably wide, is not deep enough to full face helmets. Repeated attempts to fit my LS2 gave me nothing but a few scratches on my beloved lid. Coming to the storage, the scooter gets an optional front storage compartment that comes handy when one needs access to important documents and items. It may be noted that the Mahindra Duro DZ offers the front storage compartment as a standard fitment.

The Maestro comes with a good positioning of the handlebar and the handles fall easily to the hands. The handlebar gets rubberized grips and this surely is one neat feature.  Again, the seat is well bolstered and is comfortable enough without having to be overtly soft. The seat is placed a bit low and that means short people won’t have too much trouble to keep their fit down on the road. The high placed handlebar on the Maestro makes U turns fairly easy owing to the handlebar not rubbing the knees. The switchgear and choke lever have been lifted from Honda scooters parts bin and nothing really new here. The fonts on IP are good enough in size and are easy to read. No external fuel filler cap will be sorely missed though.

All said and done, the Maestro manages to impress us in this department. 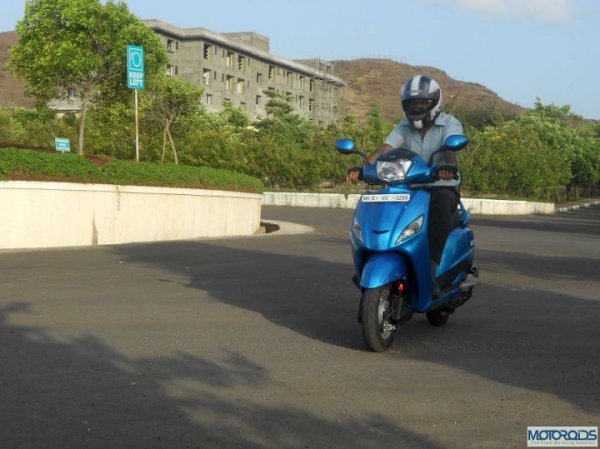 Before I begin, let me make it clear that am not a big fan of Honda Activa’s performance and the only automatic scooter that actually managed to put a smile on my face is the now defunct Kinetic Blaze. The Maestro shares the 110cc, 4-stroke engine that produces a power of 8.2 PS with the Honda scooters. The scooter performs quite well and hardly feels under powered, at least, in the initial speed range. It reaches 60 kmph in a brisk manner but anything above that is a bit of an effort. The best thing to say about the performance from this scooter is that it is good for city speeds and quick getaways from traffic lights. Anything above 60kmph takes a fair bit of time to come and it took me a lot of patience to touch 75kmph on the speedo.  Power delivery is quite linear till 60 kmph and the engine is very refined. I will say that the engine lacks absolute top end grunt, but has a good low and mid range punch. The Maestro should return about 45-48 kmpl in regular traffic conditions and that means the scooter should be good for about 250 kms on a single tank of petrol. 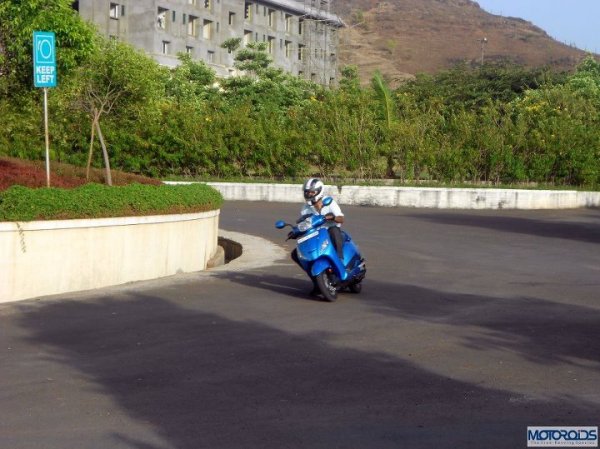 One of the things I hate about the Maestro is the unit link type suspension instead of a telescopic unit (a la Honda Aviator). The ground clearance on Maestro is good enough and the scoot doesn’t kisses the speed breakers when under load. The suspension easily absorbs most of the irregularities of the road. However, it lets you know what kind of surface you are on and that is how I feel it should be. The Maestro is pretty stable in cross winds and high speed runs. The scooter sports drum brakes that come with Honda’s Combined braking system. The brakes are good in their bite and are sufficient for quick stops from speeds this side of 60 kmph. I would like to add that the MRF Zappers do a good duty and provide a nice grip but unlike the Honda Dio and TVS Scooty/Wego, where cornering is so much fun, despite repeated attempts at knee scrapping, all I got were some funny looks on the faces of on lookers. 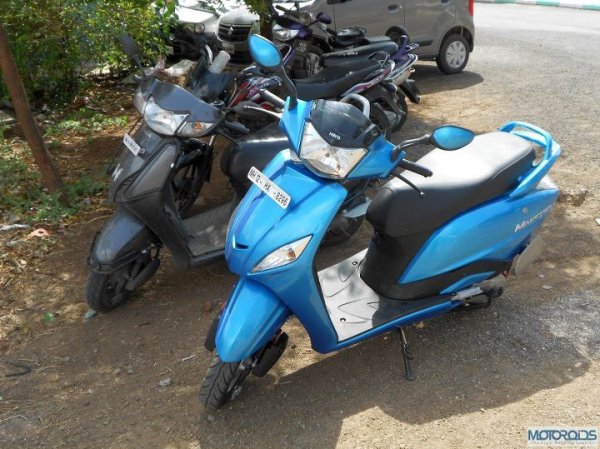 The Maestro comes with a sticker price that is, at INR 44000 (ex showroom, Delhi), almost Rs 2,000 more than the Honda Activa. However, thanks to the stylish set of clothes, Maestro turns out to be more appealing than the Activa. Also, while Hero is targeting male customers, we believe that a small section of Activa buyers, which consists of the fairer sex, will now give a good look to the Maestro. The Maestro feels half a shoe size larger than the sister Pleasure, which still uses the old Activa’s engine and hence is also lesser in performance stakes. The Maestro can be used for regular commutes, grocery shopping and the missus won’t look too odd when riding the scooter. This vehicle seriously has the potential to become a hot seller.

In a nutshell, the Maestro comes across as a competent scooter and we won’t be surprised to see it eating into the sales of the Ex’s Activa. Also, Hero finally has a scooter that every guy can ride without getting questioning looks from his friends and other road users. After all, why should boys let the girls have all the fun? No?