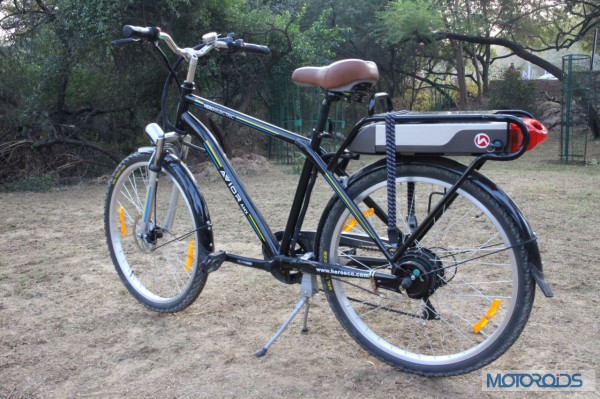 As automobile journalists, we get to review many cars and motorcycles, be it an entry level commuter or a supercar. However it’s not every day that we get to ride or drive a completely new product category. One such ride came from Hero Electric, the electric vehicle arm of Hero group with the recently launched electric cycle, the Avior. We were really looking forward to riding it, especially now when cycling has made a comeback keeping in view the unhealthy city lifestyle. And With Indian metro cities getting more and more congested and traffic getting worse every day, people are always looking for quicker and healthier ways to commute. The Avior gives its rider to choose whether he wants to use human power or battery. You can propel this motorcycle by pedalling, asking for part power from batteries, or put it on a fully electirc mode. So does the system make for a great alternative for a basic human powered bicycle? We find out 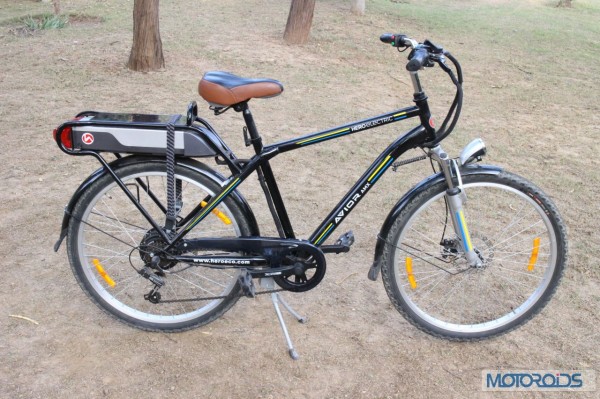 Even though basic looking, the Avior still managed to get some attention. However, it was not due to striking looks, but because of people’s curiosity about the big battery pack mounted where you generally find a careier. The riding gear I was wearing also played its part in grabbing some attention. The Avior easily came across as an electric cycle and some of the potential customer base (drivers, cooks and field workers) did like the concept.

The frame of the Hero Electric Avior is heavy and while the Shimano dérailleur gears looks neat and work extremely well too, the rest of the bike lacks a premium finish. All-black paint and minimalistic stickering makes the bike look rather basic. It doesn’t look very different than the bicycles we see on a daily basis. While the cables look neat in the sheath wrap, better job could have been done as the whole assembly protrudes too much in the front. 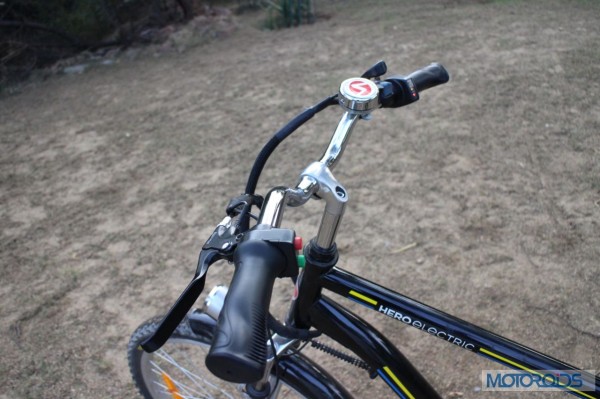 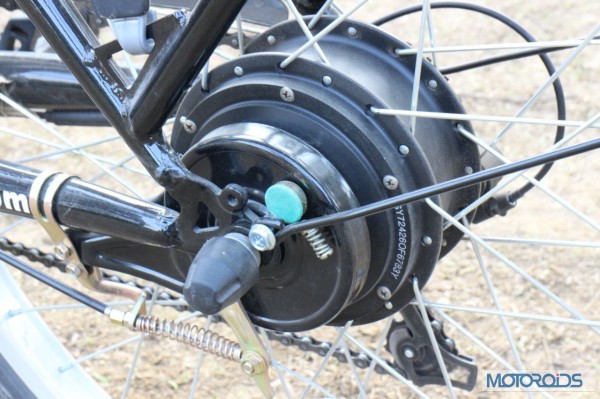 A major advantage one has with this electric vehicle is that the battery pack comes off by unlocking with the key and it can be carried to a convenient charging point, in case a charging point near the bicycle is not available. My garage did not have an electric socket so I carried it to my apartment and charged it. While specifications claims the battery charge time to be 4.5-5.5 hours, it took a little more than six hours to fully charge. The range was claimed at 25 km, but does the claim hold? We will soon find out. 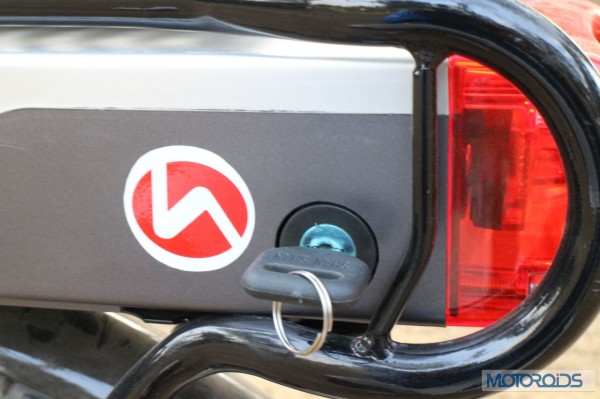 If one does not use the electric motor at all and purely relied on muscle power to propel the bike, pedaling isn’t too difficult on flat roads. We could easily maintain a speed of 18-20 kph which is decent for a 35 kg cycle. One can switch to semi electric mode by opening the throttle. The electric motor assists the rider’s by a fair margin. One can even go full electric without any pedal input. However, with electric motor taking the entire load of propelling the rider and the cycle, the range would be reduced. We rode at a stretch on full electric mode with small pedal inputs for going faster when needed after which the range stood at about 25 kms. With assisted pedaling, the battery drainage would be a little lower which would result in a relatively higher range. However, do not expect great acceleration with the tiny electric motor always stressed to pull the weight (by cipriano). With a 74 kg man on board, the cycle never went past the 20 kph mark and that too without any inclines thrown in. Keeping the throttle pinned, the cruising speed stood at 18 kph mark on a flat road. Slightest of inclines reduced the speeds to 15 kph. 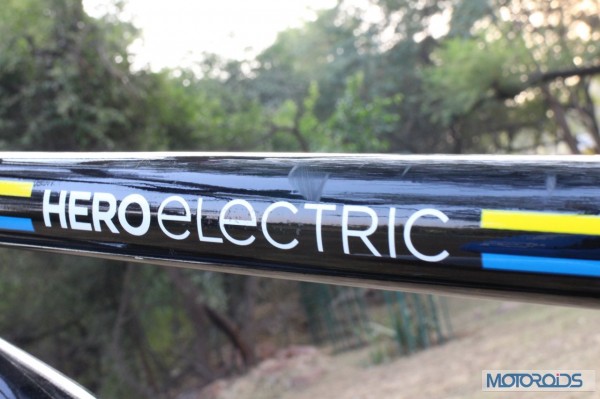 This cycle is meant only for short commutes where the whole journey would not last more than 25 kms between charges, if you want to use the electric assist all the time that is. For those who don’t mind stressing their muscles a little more, longer commutes can also be undertaken. To go faster than 20 kph, one will have to use muscle power. Looking at these limitations, the Avior would be an ideal tool to commute with local transport (read buses) if the public transport is bicycle friendly. In Most European countries, metro buses allow commuters to mount their bicycles. In India, however we aren’t aware of any such facilities, so you will essentially have to park the bicycle, which, owing to the removable battery pack, isn’t a very safe option. The bicycle look rather ubiquitous though, so the chances of prying eyes and theft attempts are still relatively low. The limited range, however, should suffice in smaller towns and for relatively shorter commutes in Metro towns as well.

Addition of the front suspension makes the ride quality decent but but hit the brakes hard and you can experience pronounced dive.  Though the front is loaded with a disc brake, the performance was rather squishy. Even the rear brakes didn’t perform to our satisfaction. There is great scope of improvement in the braking department.

The build quality of the Avior leaves a lot to be desired. Having ridden the bicycles for about 20 odd kilometers on Delhi roads, the cycle started to emanate vibes and felt rather loosely put together. Our first experience was not very pleasant. We left early morning to rendezvous with some avid cyclist friends who also wanted to check out the new product. However, in the middle of the ride, the pedal fell off. We had to ride back on full electric (which means slower speed). However, after proper tightening, the pedal kept put. The small headlamp also rotated on its side after some riding in pot holeed roads. For a company which has been producing cycles for decades for Indian roads, we would have expect a more robust build quality. 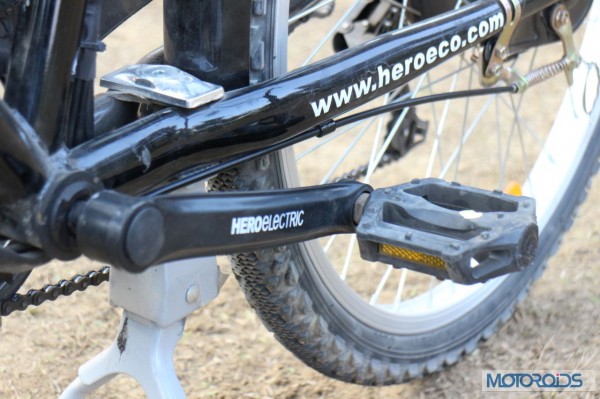 The Avior is a very interesting concept. It promotes a healthy commute, allowing the rider to exercise as he travels, while also leaving open the option for a fully powered ride if he feels tired. It’s a relatively affordable electric cycle which allows eco-friendly commuting, Hero Electric needs to iron out a few crinkles in the product. While it rides all right and has a good motor, build quality and brakes were a letdown. The Avior is good for those who have need a very functional, eco-friendly and affordable tool for their short commutes and do not care for looks or style. But to attract a wider range of audience, Hero Electric would need better styling, build quality and a weight reduction with some engineering.

It’s a great attempt, which, with some more refinement, some more spunk from the motor and better styling can present itself as a very appealing product to the eco-conscious short distance commuters. Kudos to Hero for executing this new concept in a market like India which is passive to electric vehicles at the moment.