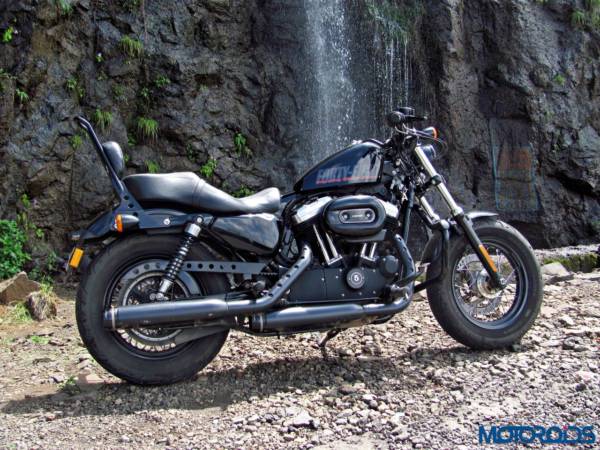 In the pretentious world that we live in, there are thankfully some things which make no bones about their form, their existence and their identity. Their character stands out both vocally and visually, traits that set them apart from the rest, from the conventional rest. The Harley-Davidson Forty-Eight is one such machine. It isn’t just moulded metal which moves on wheels but as we found out, a mirror which reflects inner rebellion, attitude and rejection of the status quo. Maybe the reason why those folks at Milwaukee hung the ORVM’s upside down. 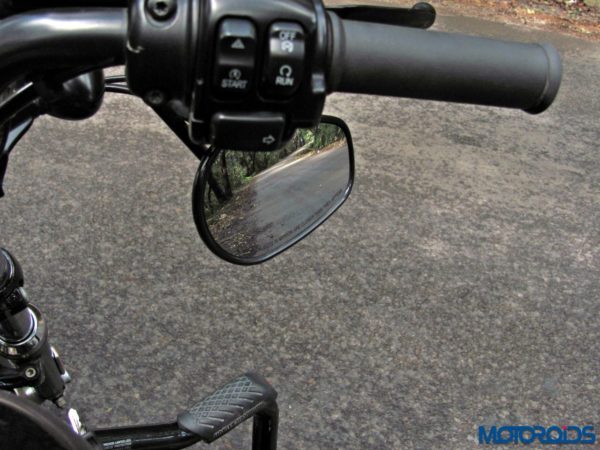 So a word of caution before you read further. If words like practical, smooth or refined pop in your head when you think of motorcycles, the Forty-Eight will relate to none of the above or any such sissy words found in the dictionary. Instead, it will transform and fill your vocabulary with words that act as a ladder to elevate and bring out the macho and brawn within. But as is the case with most things filled with brawn, there are certain characteristics of the Forty-Eight which will make your grey cells itchy. We’ll find out what they are, but if you belong to that school of thoughts which doesn’t consider things to be beautiful unless there is something unconventional or strange about them, you should take a good look at the Harley Forty-Eight. For it could be that Banshee you are ready for. 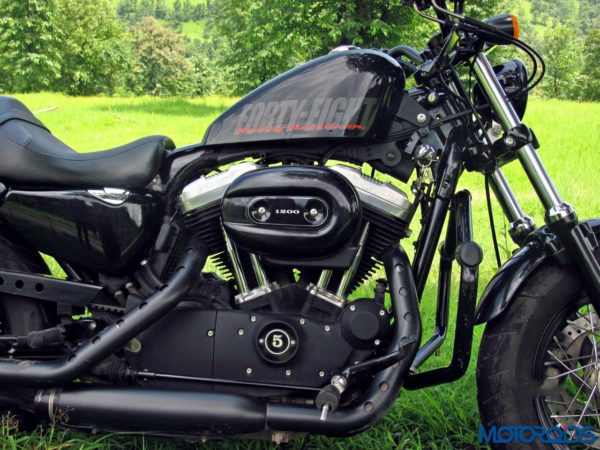 Now, the Forty-Eight isn’t something that will make itself ready once you whistle out for it, saddle yourself on and think about heading in the direction of the wind. This machine requires an occasion. Why would we say that? You see, with a fuel tank that holds roughly 8 litres of petrol and an economy of anything between 15-20 kpl, you better know every pump on your route, unless pushing more than two quintals of heavy metal to the nearest gas station is included in your idea of motorcycling. 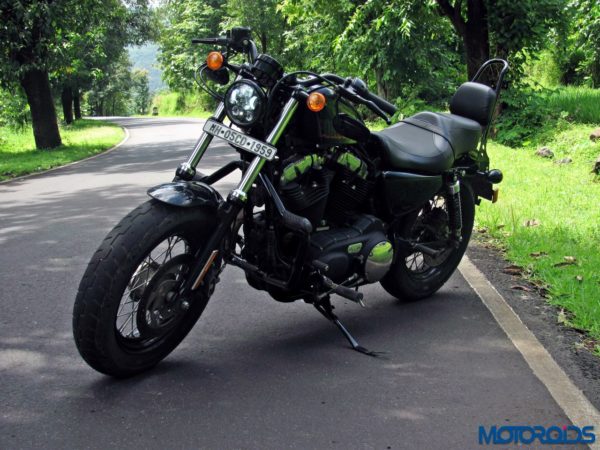 Now, through this review we would like to share our experience we had with the Forty-Eight, rather than getting into technical aspects or academic figures. Our machine came fitted with a lot of optional bits, like the seat which accommodates a pillion (Yes that is optional) replete with a backrest, super cool LED headlamps and a ‘Screamin Eagle’ exhaust system. Looks wise, the Harley-Davidson Forty-Eight looks industrial but in an appealing manner. Save for the internals of the engine, every other component is exposed and painted in black. If that dark side makes you hallucinate though, you may opt for that peanut gas tank to be painted in a shade that saves your day, either Amber Whisky or Charcoal Pearl.

Next page for more… 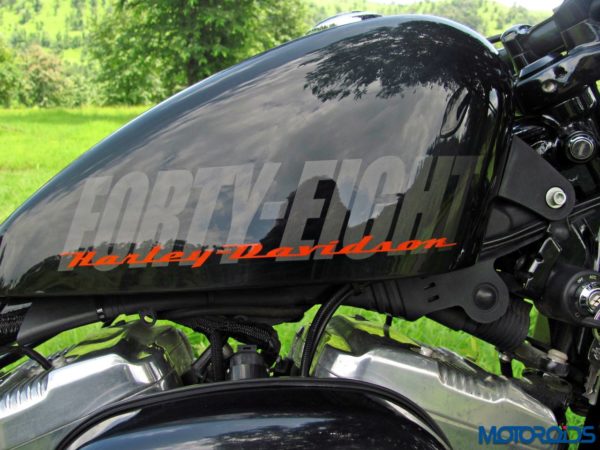 Talking about the fuel tank, it first appeared on a Harley-Davidson motorcycle back in 1948, providing the inspiration for the Forty-Eight model name. The small 2.1 gallon tapered peanut fuel tank holds strong even today with its traditional styling and modern attitude. The front end is beefy where the tall, fat MT90 tyre gives the Forty-Eight a grounding visual equal to that of a 1950 Mercury. At the business end of things, the slammed black, old school, drag-style handlebar with speedo and under mount mirrors adds to the stripped down, minimal look of the Forty-Eight. The rear again is clutter free where three reflectors flank the licence plate and illumination for turning, braking and positioning is all taken care by the retro-styled Stop-Turn-Tail lights. 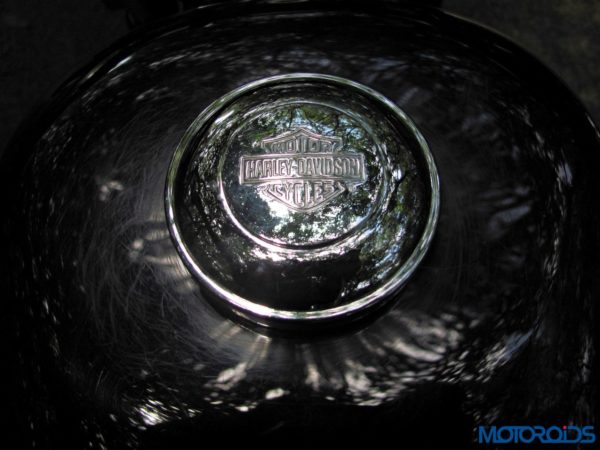 All ready? Let’s twist the key and start rolling. Hang on a second; allow us to tell you about the key itself, which would look out of place even if it was meant to unlock a cheap suitcase. The ones which open without notice and make all your dirty secrets go public. So you slot the malnourished key, turn it two clicks and the headlights come on. Push the engine kill switch to ‘Run’ position and the fuel-pump comes to life. What happens next though makes you want to respect that flimsy little thing.  As you push the start button, the 1202cc Evolution motor comes to life and as it wakes up, it creates a tremor around the chassis which could be measured on a Richter scale and once it settles into idle, your arms still feel the aftershocks. Blip the throttle and you’d be greeted by a sound that is closest to the one which is perhaps heard only from the deepest bellies of this blue planet, a growling roar that might fill the air when you tick off something as fictional as a ‘Yeti’. Something that would make the ordinary crows around you leave their apartments and turn them into migratory birds. 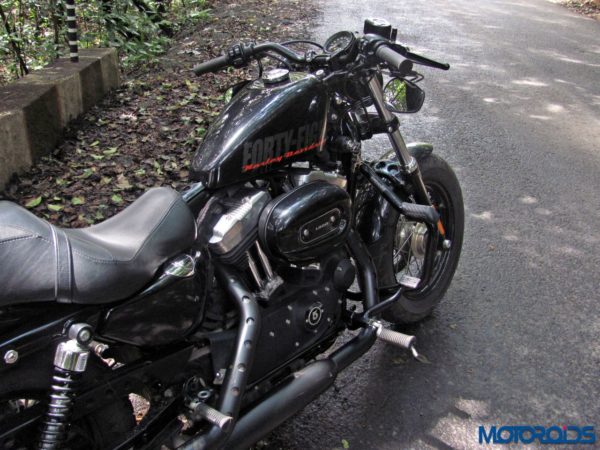 The riding position is rather comfortable though, where one feels like sitting in the saddle rather than on it. Grabbing the bars makes your arms flare and once your feet land on the forward set pegs, you suddenly transcend into a different world of motorcycling. One thing we noticed though is the exposed metal rod between the seat and the tank, which makes you shudder with the thought of it turning out to be a weapon that terminates the word potency from your vocabulary. Thankfully, everything still works fine.

Next page for an image gallery.. 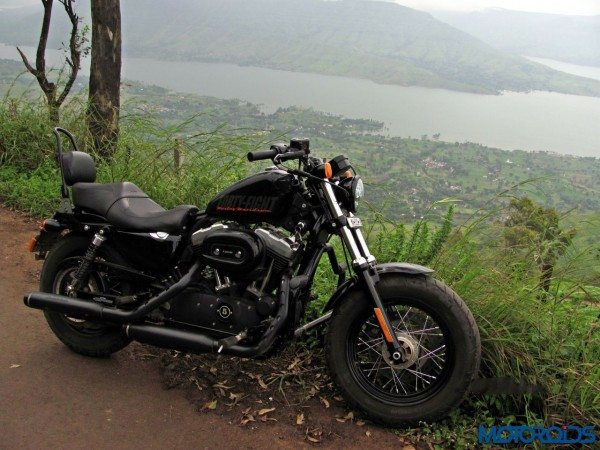 Thanks to the music coming out of those twin pipes, the Cops stationed atop this hill already knew about our presence while we were at the bottom 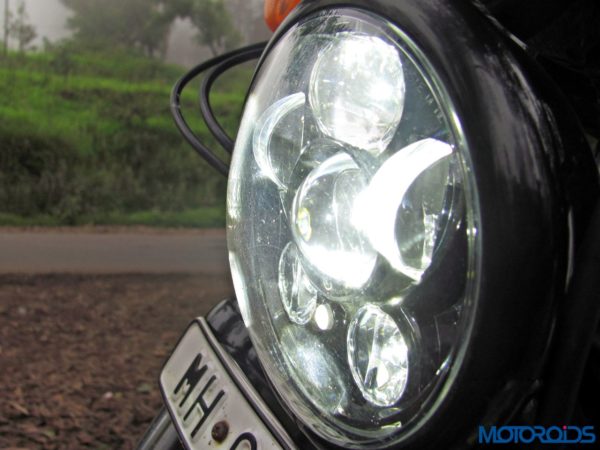 LED lamp is optional, is always on 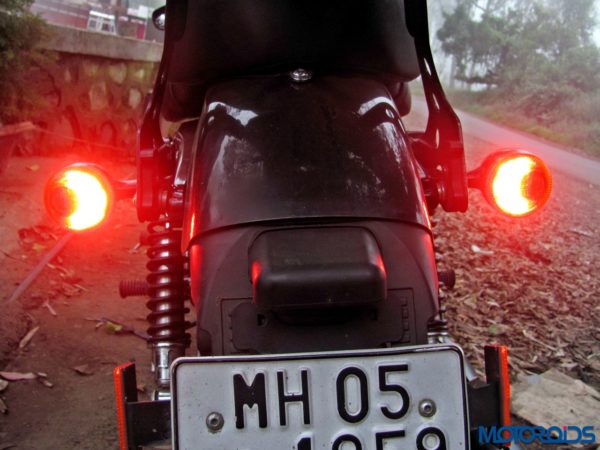 Those two lamps are LED’s too. Include Turn, brake and position lights 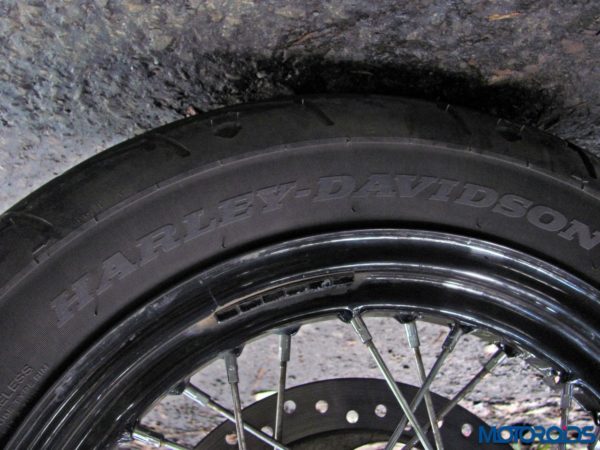 Even the tyre carries the Harley-Davidson stamp 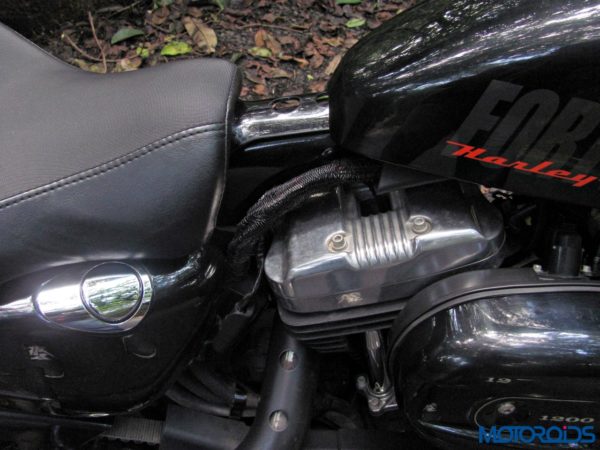 That piece of exposed metal between the seat and the tank only looks lethal, it isn’t 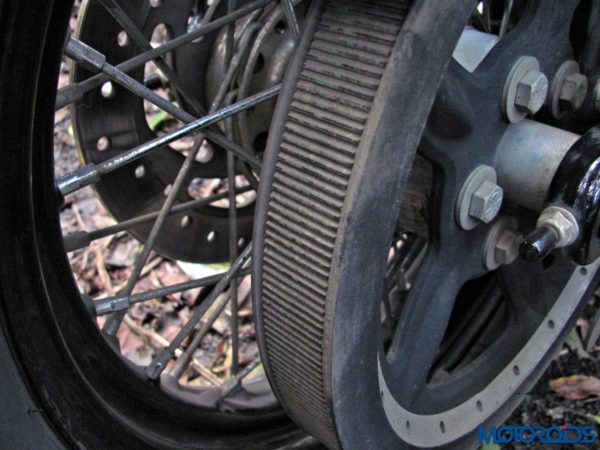 A belt that cuts the chain, sets you free 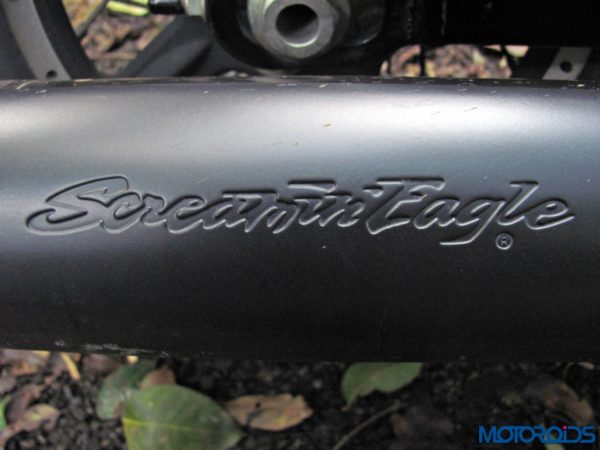 This Eagle does scream 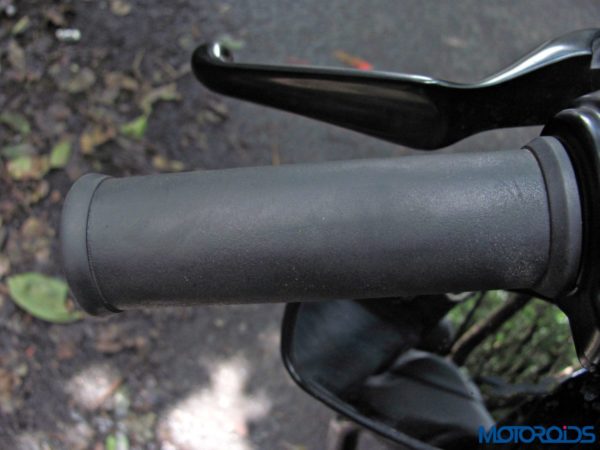 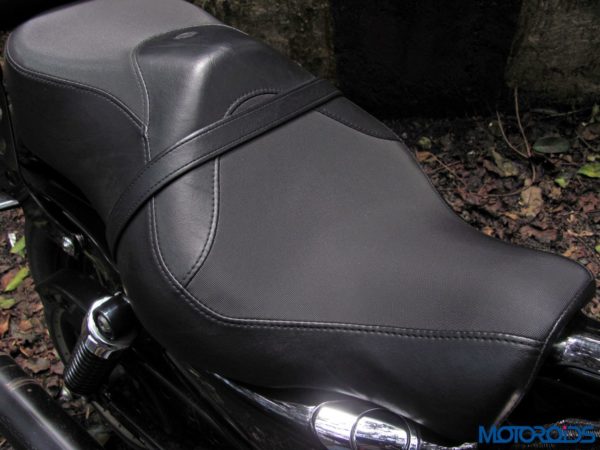 That is an optional seat which has space for pillion 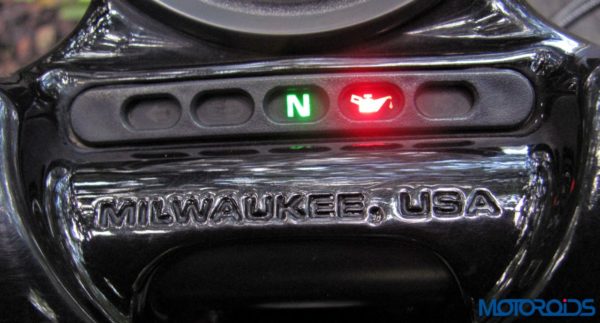 Tell-tale lights are bright enough, while the speedo also includes a digital readout for revs, gear, tripmeter and odometer 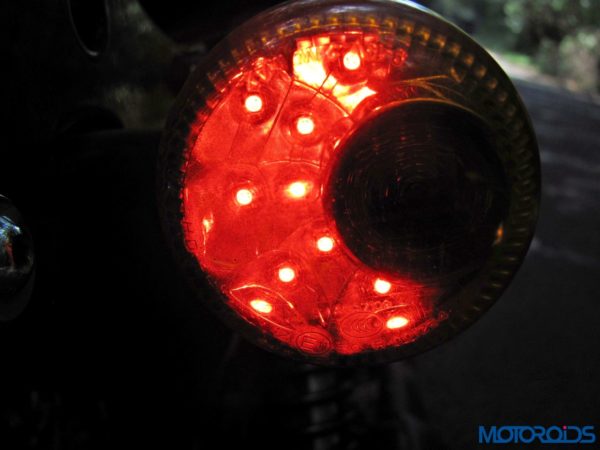 Although small in size, rear lamps are bright and visible in the night

Next page for more..

As you get ready to rock and roll, the first thing you notice is the hard clutch lever that requires quite an effort to pull and is guaranteed to give your left arm a workout. Slot the bike into first and you are greeted by a loud ‘Clank’ which confirms the machine under you couldn’t have been built anywhere else but in the Wild West. As you dump the clutch, any throttle input that is more than necessary makes the rear step out, which is fun if you know how to bring it back home. 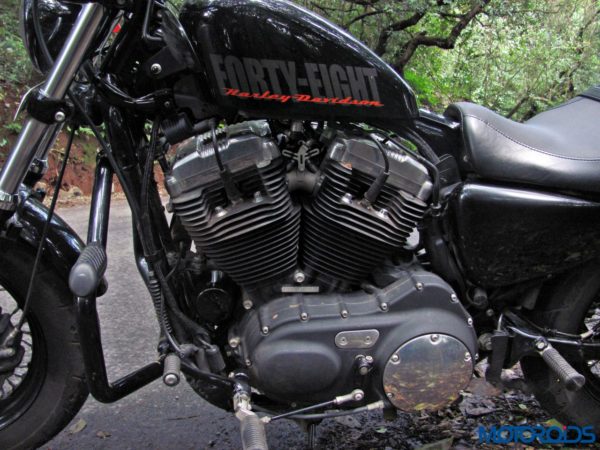 On the move, as you come to terms with the drama involved around riding the forty eight, escapism takes a break the moment you stop at a red light. All of a sudden, the lower half of your body starts to experience different weather compared to the upright half as the heat from the 1202cc Evolution motor makes you experience dual-zone climate control on a motorcycle. However, once the gods on two wheels play Houdini and make the traffic disappear, the Forty-Eight shoots off into the sunset as you begin to get a feel of the scorching torque at the disposal of your right wrist. 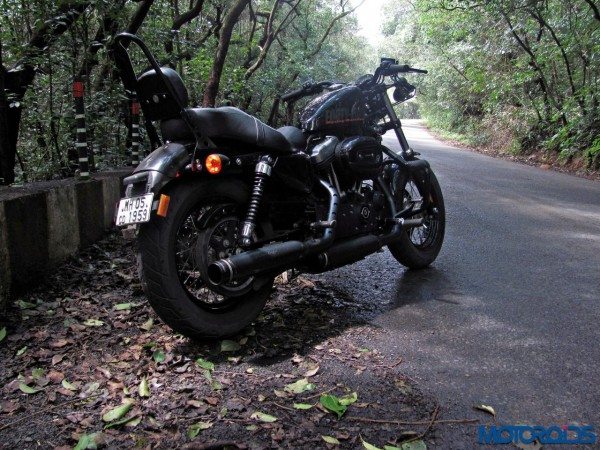 On the flip-side, all that twist and the joy can only be enjoyed till a certain level. If you begin to ride this Harley, as if you are in a tearing hurry to climb the ladder to the Sun, when the speedo climbs into the upper reaches of triple digit speeds, there’s little or no SPF protection from the wind. That makes your flared arms want to lose grip on the bars and those forward set feet placed at an angle on the pegs begin to lose their placement. The flat area of your shoe sole, fighting against the wind. One way to cheat that is place the feet behind the gear and brake lever, but that is recipe for doom if there is ever an emergency situation at those speeds.

The Harley-Davidson Forty-Eight is pretty much on rails in a straight line and even on lazy bends, however, show it a pair of fast twisties and the heavy front starts acting reluctant, largely due to the excessively fat but high on appeal front rubber. On another note, two up, the rear suspension starts to bottom out on uneven stretches of tarmac while the front hydraulic unit could’ve been set to be softer as it is unable to isolate the handlebar from any undulations that the front Michelin encounters. Brakes at both ends are not sharp as a Katana but do their job well in hauling down two hundred kilos of metal just fine. 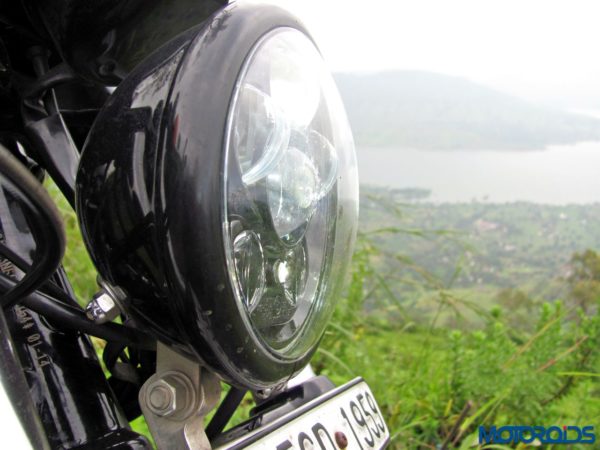 The super cool main LED candle does its job of making the front look aggressive but illumination isn’t all that great. The throw disappears in front of the glare from oncoming traffic and we had a difficult time figuring out craters in the dark. The switchgear though is of top notch quality, operates with a reassuring feel and is a joy to use. 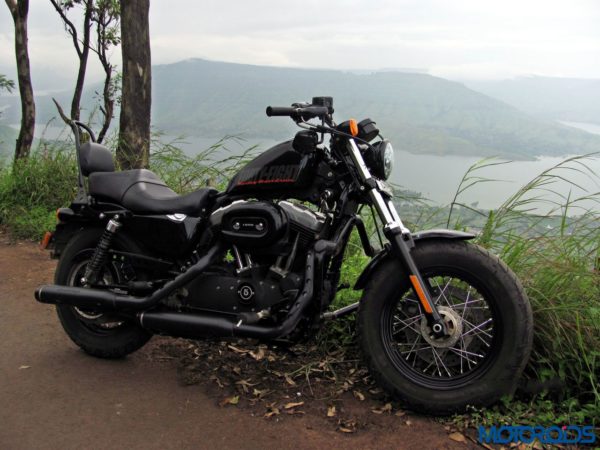 Next page for more..

We also had some unforgettable instances while astride the Harley Forty-Eight. From a jaywalker who was crossing the road in a funny manner, only to hurry himself towards the pavement when we blipped the throttle. To a couple cops, who were stationed at the end of a hill climb, and as we made it to the top after bringing the hills alive with the sound from that Screamin Eagle, they were confused as why were we riding a motorcycle so loud that announces its arrival from the bottom of the hill. Some thought the motorcycle runs on an unknown fuel only they’d heard of, called ‘White Petrol’, while some thought the 48 is propelled by two engines, the exposed V-twin adding to their imagination.

Now, some would try to figure the purpose or the reason behind anyone who’d buy this motorcycle. But logic doesn’t drive the heart. The sort of folks who’d connect with the Harley Forty-Eight are those who went to school but never learnt to live by the rules. Who trust everything that the masses have to say, but secretly and solely believe in the voice that emanates within. 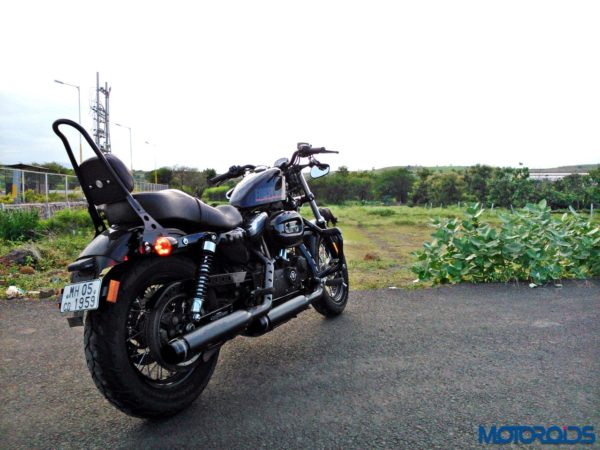 Riding the Harley-Davidson Forty-Eight was an immersive experience, where there’s not much that is scientific about the machine. It’s all about blood, bones, hammer and chisel. Nothing about this motorcycle can be described in feminine terms. It isn’t something that talks like summer and walks like rain, it instead roars like thunder and hustles like hurricane.