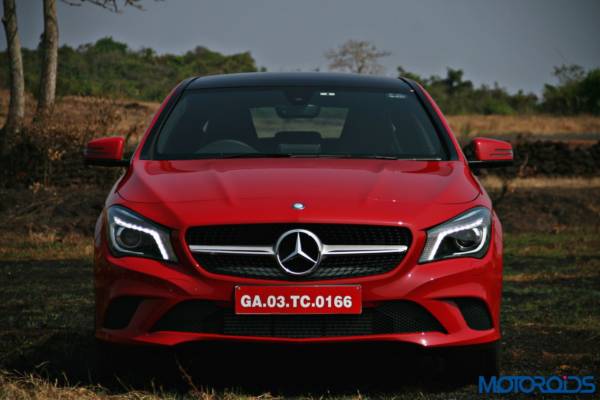 The Mercedes CLA will be launched in India on the 22nd of January. However, the cars, as tested would initially come through the CBU (Completely Built Unit) route. Post April 2015, Mercedes India will start assembling the premium compact sedan at their Chakan plant, indicating a slight reduction in the yet-to-be announced prices. Also, with CKD assembly, the range of trims should also start opening up, as opposed to the current availability of only one trim upon launch.

The CLA will be offered with two engines options. Petrol power (CLA 200) comes in the form of an 2.0 liter 4-cylinder petrol engine with 184PS of power produced at 5500 rpm. The engine also produces 300 rpm of torque between 1200-1400 rpm. There is also a 2143cc turbo diesel on offer (CLA 200 CDI)with 136bhp of power output @ 3600-4400 rpm with torque output rated at 300Nm between 1600 and 3000 rpm. Both engines come mated with the 7G-DCT dual clutch transmission with ECO, Manual and Sport modes to select from and steering mounted pedal shifters for manual shifts.