The cat is finally out of the bag. The all-new 2016 Ford GT has finally graced us with its stupefying presence at the ongoing North American International Auto Show (NAIAS 2015) in Detroit. For Ford, the ultra-high-performance super-car will serve as a technology showcase for top EcoBoost® performance, aerodynamics and lightweight carbon fiber construction. However, the production version will only be revealed in late 2016.

One of the 12 new Ford Performance vehicles promised by the manufacturer coming by 2020, it joins Focus RS, F-150 Raptor, Shelby GT350 and Shelby GT350R in the Ford Performance lineup. Beginning production late next year, the GT will be sold in select global markets to celebrate the 50th anniversary of Ford GT race cars placing 1-2-3 at the 1966 24 Hours of Le Mans. 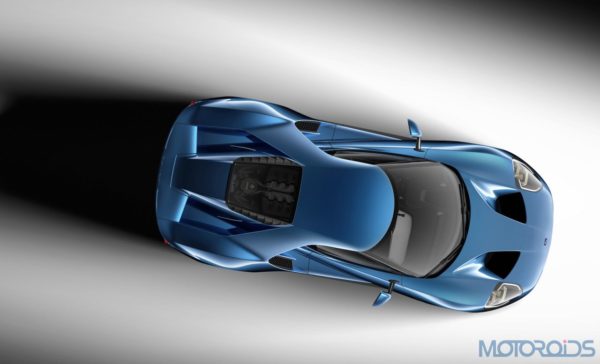 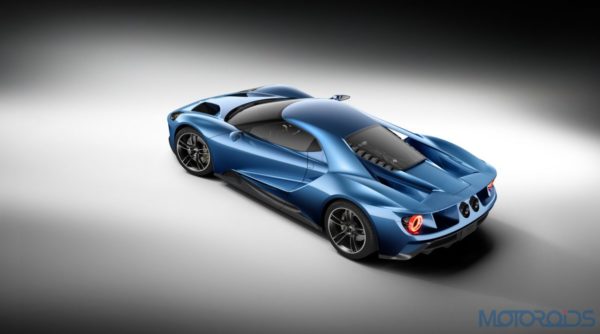 The GT’s construction makes extensive use of lightweight materials, including carbon fiber and aluminum. Anchored by a carbon fiber passenger cell, the GT features aluminum front and rear sub-frames encapsulated in structural carbon fiber body panels. In fact, Ford claims that the GT will exhibit one of the best power-to-weight ratios of any production car. Ford’s new halo-car will also feature advanced active aerodynamics, such as a deployable rear spoiler, and a host of material and technology innovations to help better serve the driver, such as SYNC® 3 – the latest version of Ford’s advanced connectivity system. 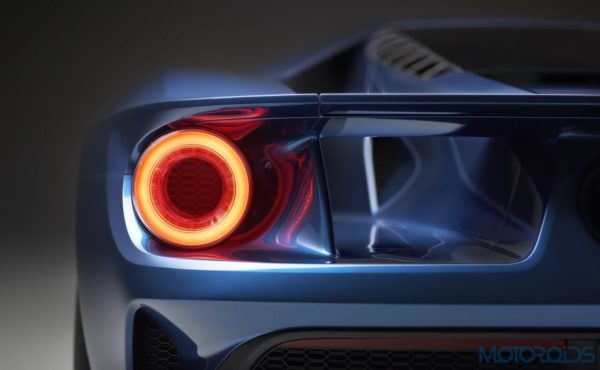 From its tear-drop shape to its aircraft-inspired fuselage and visibility-enhancing curved windshield, every slope and shape is designed to minimize drag and optimize down-force. Although each surface on the GT is functionally crafted to manage airflow, it also features fully active aerodynamic components to improve braking, handling and stability. An active rear spoiler is keyed to both speed and driver input, reactively deploying and adjusting its height and/or pitch angle depending on conditions. The chassis is suspended by an active racing-style torsion bar and push-rod suspension, with adjustable ride height. The 20-inch wheels are shod with Michelin Pilot Super Sport Cup 2 tires featuring a unique compound and structure designed specifically for the Ford GT. Multi-spoke wheels encircle carbon-ceramic brake discs at all four corners. 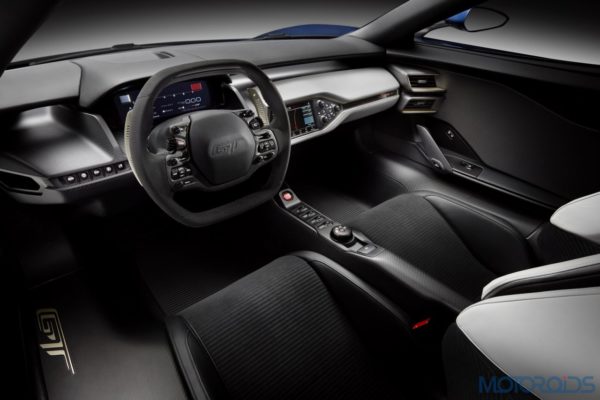 The narrow-profile canopy reduces frontal area, while the two-seat cockpit is accessed by upward-swinging doors, and features driver and passenger seats integrated directly into the carbon fiber passenger cell. Ford says that this configuration significantly reduces seating hardware and weight, and provides a consistent and direct sensory connection to the chassis. The fixed seating is combined with adjustable pedals and steering column to accommodate a very wide range of driver statures. 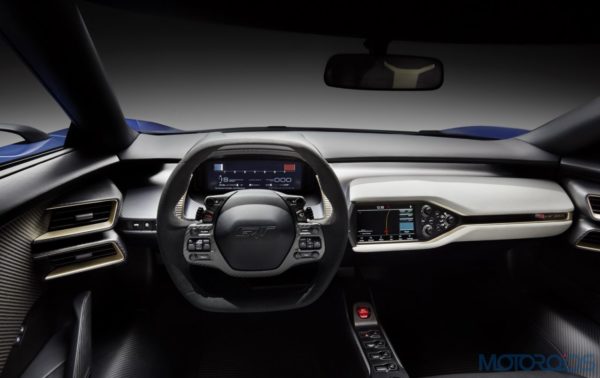