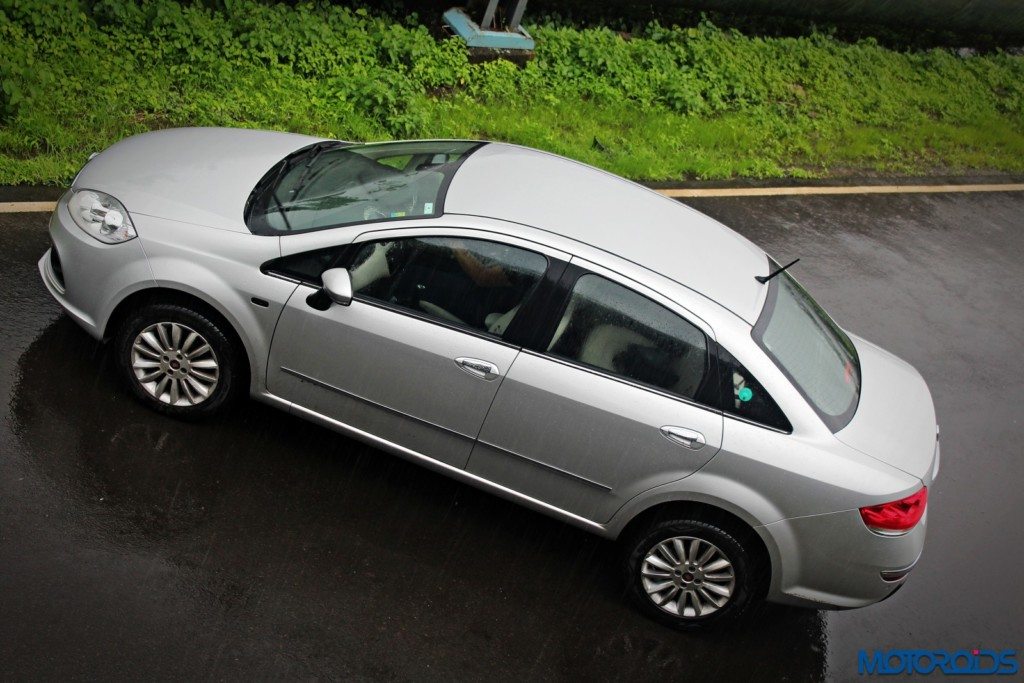 Alright then, the Linea gets yet another facelift and we are out having another go at the car. The newest 125S version of the Italian sedan is more than just a visual upgrade though, featuring an increase in power and witnessing an introduction of the much needed touch screen, which is the order of the day. Fun fact – it’s the most powerful and torquey petrol car in its segment, and by some margin. Here’s all you should know about it

Is that engine under the bonnet new?

Nope. It’s the same 1.4-litre turbo charged petrol unit that powered the now discontinued T-Jet version. It’s been tuned to deliver more power (up by 11PS), though, and now dishes out 125 PS as the name of the new variant suggests. 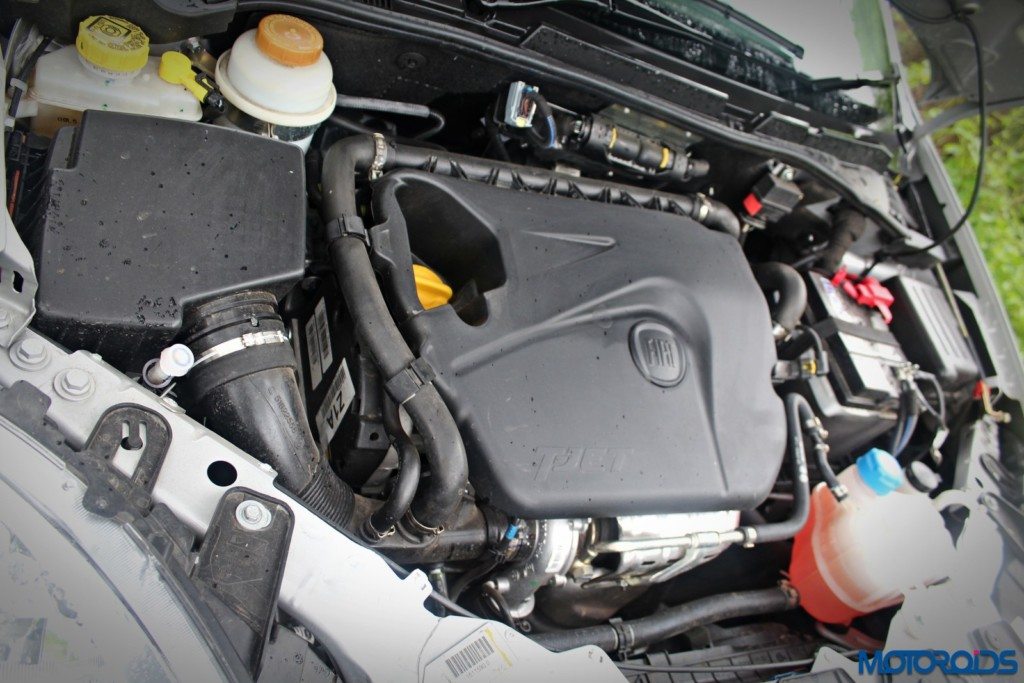 That power output figure is the highest in its segment, and along with a stonking 208 Nm of torque, should make the Linea 125S the biggest hoot monger in its class, at least on paper.

So is it? The biggest hoot monger?

We don’t know what is if it isn’t, though its not too wild in low revs. Even with a turbo spinning under that bonnet, the 125S does show docility in the lower echelons of the rev range. So while you’ll have some drive at the wheels without any splutter between 1000 and 2000 clicks, you’d not be able to feel what’s so special about this one. You may call it a mild instance of turbo lag if you will. 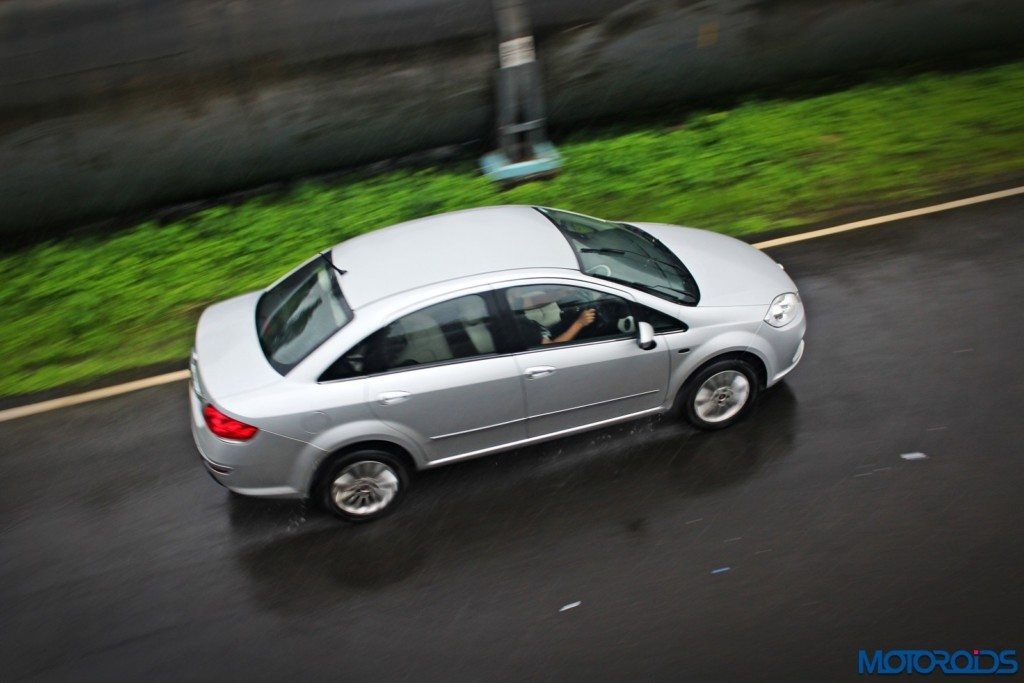 Power starts building from 2000 rpm onwards, with the turbo spooled up nicely at 3000 clicks and delivering a heady dose of power to those wheels shod with the widest footwear in class, for some very obvious reasons. Thereon, the 125S pulls clean all the way to 6500 rpm, en route delivering excitement none of its competitors possibly can. The potent engine loves being revved and makes an intoxicating, whooshing sound while being at it. Mashing the right pedal on this Linea is a therapy for the petrolhead.

Well, slot it into the first gear, bury the pedal and a deluge of power and torque fights the 205 section Apollo Alnac rubber riding fifteen inch alloys, and wins momentarily, inducing a pronounced torque steer. Milliseconds later, you’d find the tyres reclaiming themselves and finding traction, with the car settling down in a solid, stable, straight line progress. Now those shenanigans might not sound technically right to some, but every bit of it is enjoyable for those seeking thrills. We’d much rather have that slithering start than not have it. Some call it character. We say Long Live Character. 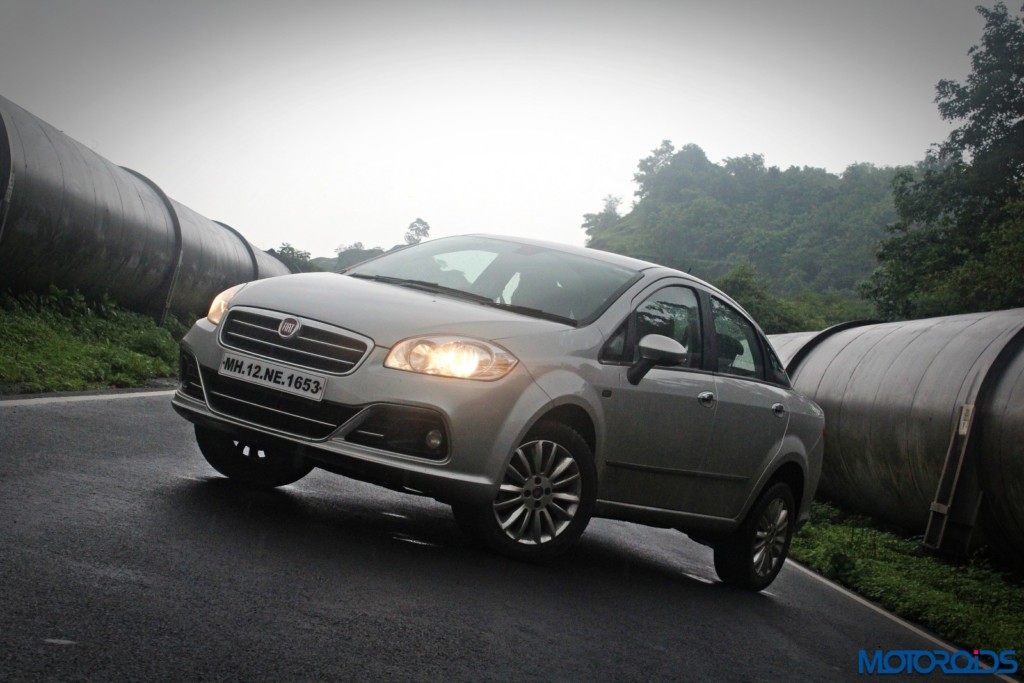 Keep at rowing that long-throw, rather rubbery and slightly imprecise gear shifter, and you feel the sheer solidity this machine imparts at speed. It’s absolutely unmatched by its more popular rivals, talking specifically about petrol powered manual versions. The Linea would almost hit 100 kays in second gear, and would nudge the double ton mark if taken all the way, and it would do all of that relatively fast. 0-100 comes in about 10 seconds, though the sensation of speed from that driver’s seat is somewhat amplified, thanks to that lovely engine sound that accompanies the act. 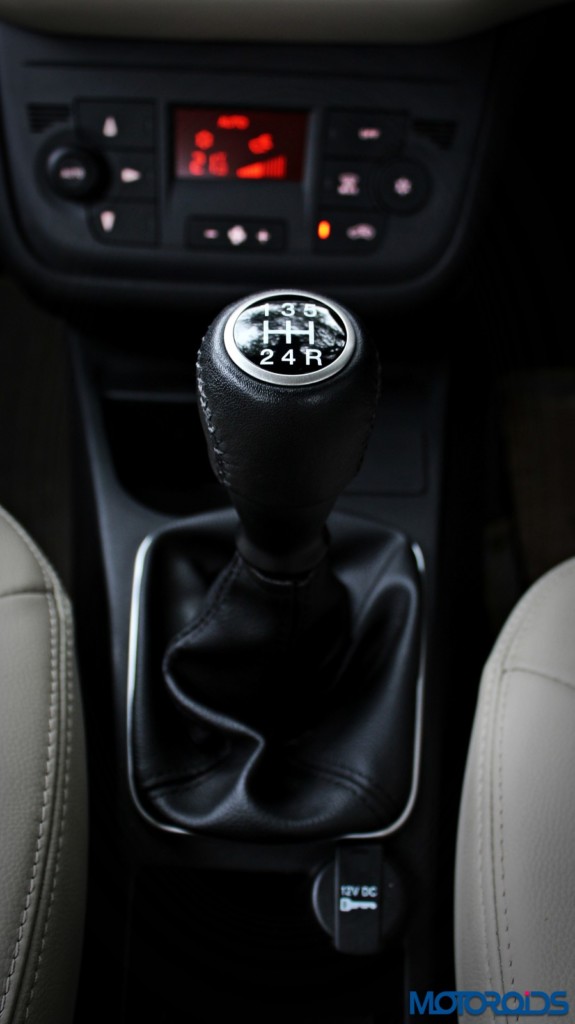 The Linea, if kept on the boil can be quite an entertainer for the man behind the wheel. It incites you to push it hard, for if you don’t wish to, you might as well be driving something else. The Linea packs a punch, it loves being revved hard and that’s the only way it’s meant to be driven. It really is an experience as against the sombre, un-engaging options we have in that segment.

How well does it handle all that power?

Pretty darned well, actually. There are discs all around, so the Linea 125S packs a solid bite. The hydraulic steering unit is heavier than anything else in the segment, and feels solid and properly involving at speed with dollops of feel. Once you’re past the initial torque steer, the Linea settles into being an exceedingly reassuring car dynamically. We drove on a day when it was pouring, and it dealt with slippery surfaces and standing water without a trace of the nervousness exhibited by its fuel-efficiency obsessed counterparts. 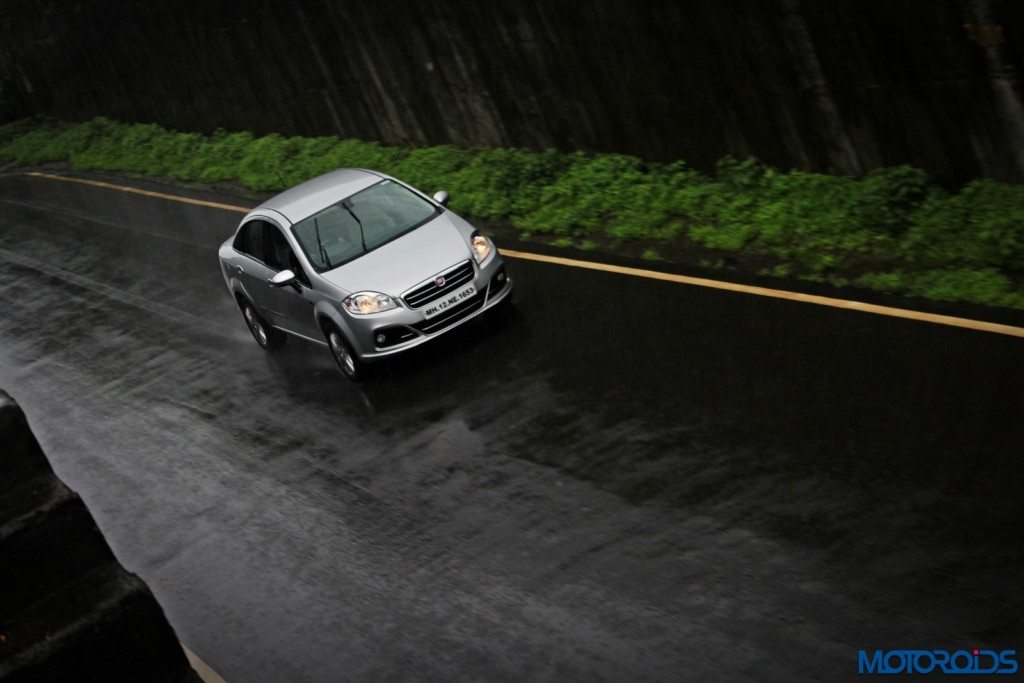 Even around bends, the Linea maintains its line without exhibiting any worrisome body roll. It’s a solid handler for the segment whichever way you look at it. Thanks to that meaty mid range and formidable torque from that turbo motor, though, it’s rather easy to make the Linea wag her tail as well if you so wish by dialling some extra steering input. You’d love all of that if you know what we’re talking about here.

Does that composure around bends mean a compromised ride?

The Linea 125S, like its other name-bearing brethren excels in terms of ride quality, and exhibits exceptional capability to absorb rough surfaces and undulations. It has to be one of the best, if not the definitive ride-handling packages for the segment. 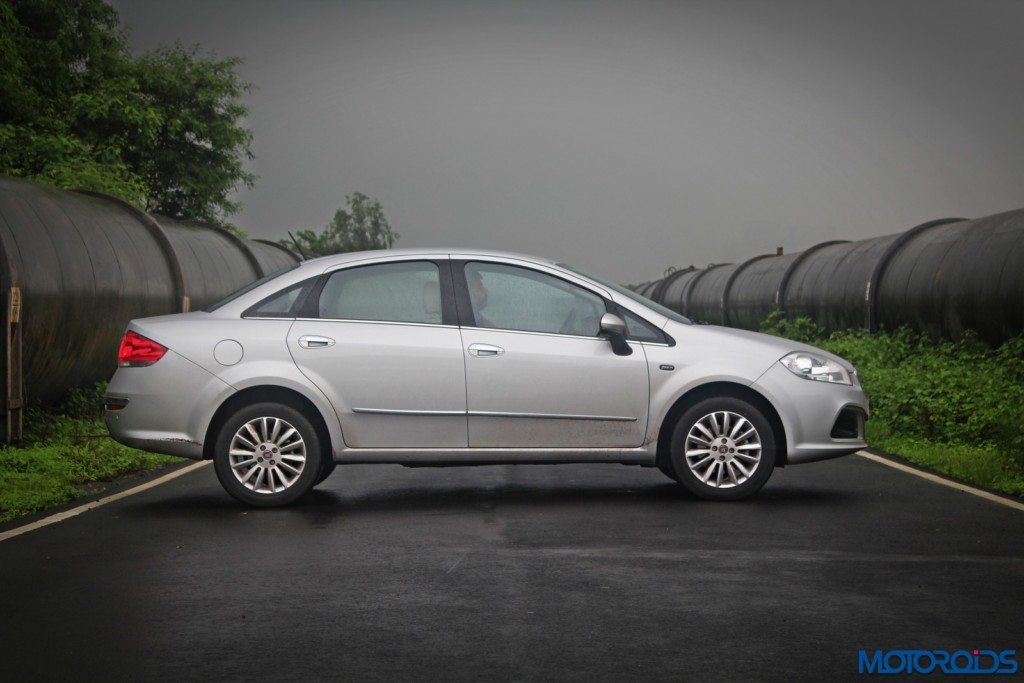 Sprung slightly on the stiffer side, the Linea’s suspension has been tuned well to tackle rough roads across a wide speed range, from very slow to very fast. Ride comfort isn’t an issue here, and the class leading 190mm of ground clearance also lends it the capability to tackle some really rough patches.

How do I tell the 125S from the other variants? Does it look any sportier?

Nope. It’s a sleeper, more or less. The only way to tell is to look at the fenders and at the bootlid, where you have the T-Jet branding. You also get the new 125S badging on the deck, and a slightly sportier looking exhaust muffler.

What’s the news from inside the cabin?

An all-new 5-inch touch screen unit which is appreciably sensitive to fingers and boasts a high pixel density is the headline here. The infotainment system has been given an overhaul, and the screen at centre comes loaded with Navigation from MapMyIndia with Bluetooth connectivity and Aux / USB / SD card playability. The new system lends the dashboard the much needed sprinkle of tech and modernity and does a sea of good for the car’s interior appeal. The system sounds pretty good too, with some distortion audible only as you turn the volume to full blast. 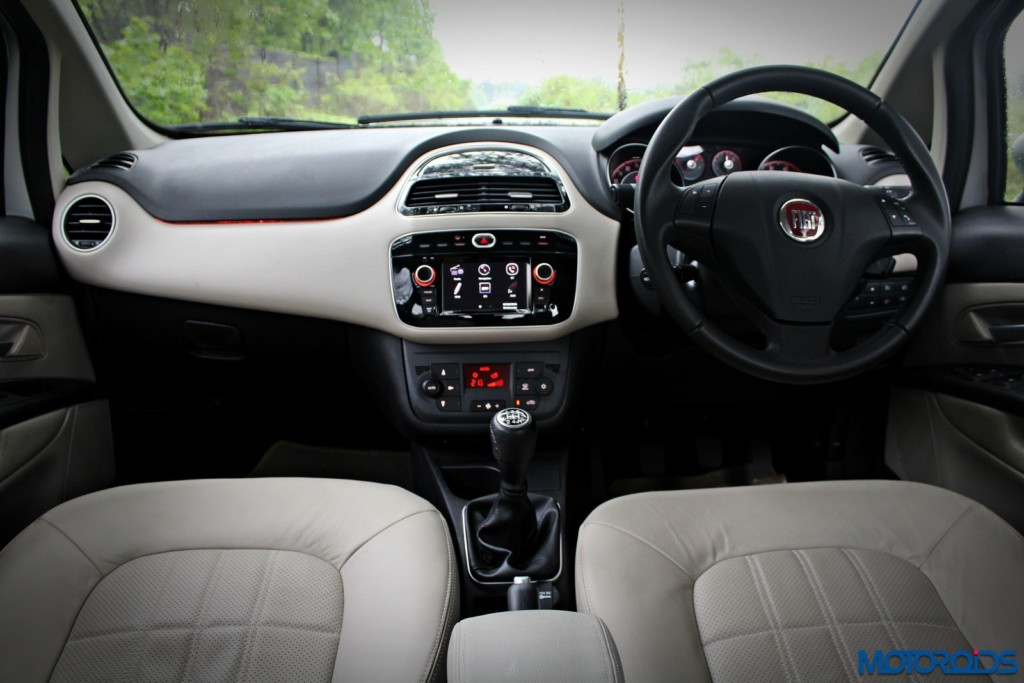 Our test machine came equipped with leather upholstery, rear blinds, auto headlamps and wipers, climate control, ambient lighting, rear A/C vent, cruise control and a leather-lidded front central armrest. Other goodies include a central arm-rest with cupholders for backseat occupants, auto down for all for power windows, auto up for driver and seat height adjustability for driver’s seat. 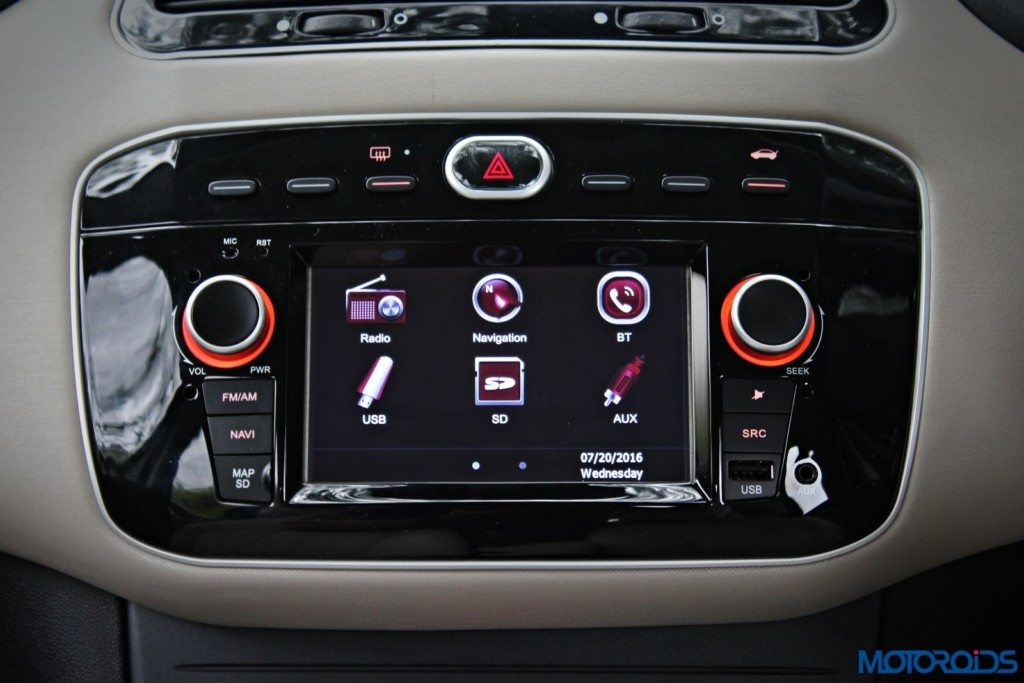 The boot is a cavernous 500 litre, though the loading lip is quite high, limiting the usability of that space. The backseat offers decent legroom, though it’s not the most spacious back bench in the segment with head and shoulder room being somewhat limited.

Detailed screen shots of the new touch screen unit are provided below.

Fuel efficiency, to start with! Driving the Linea is an experience, but it charges its premium for those kicks. Driving enthusiastically, kissing the redline often can pull the fuel efficiency figure down to as low as 7 kmpl, though driving with a light foot below 2000 clicks would extend that number to upto 14 kmpl on highways. Don’t expect the fuel efficiency to match that of other NA cars in the segment, though, in general. 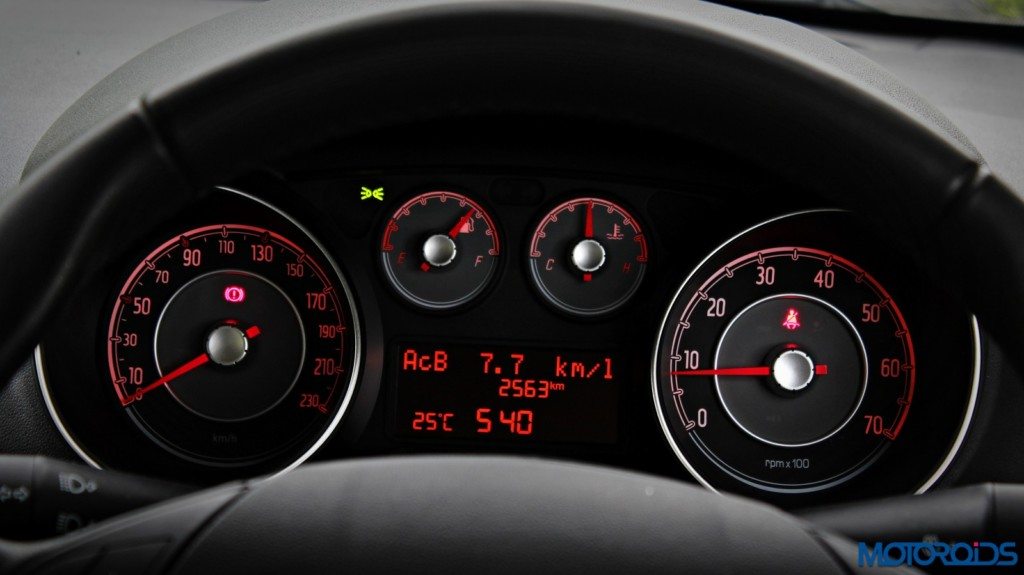 The Interior of the Linea looks spruced up with the inclusion of a touch screen, and the unique soft touch material on the dashboard, along with the orange ambient lighting and leather upholstery really makes the cabin pretty cool to look at. Some hard plastics on the dash and door panels dilute the overall experience though.

Depends on who you are. The Linea is tough to overlook for the performance enthusiast. It’s got character, style and performance in spades and would entertain the petrolhead generously the old-school way. It’s pretty well specced and offers great bang for the buck if going fast and getting thrilled top your priority list. We can vouch for the build quality and the mechanicals too. 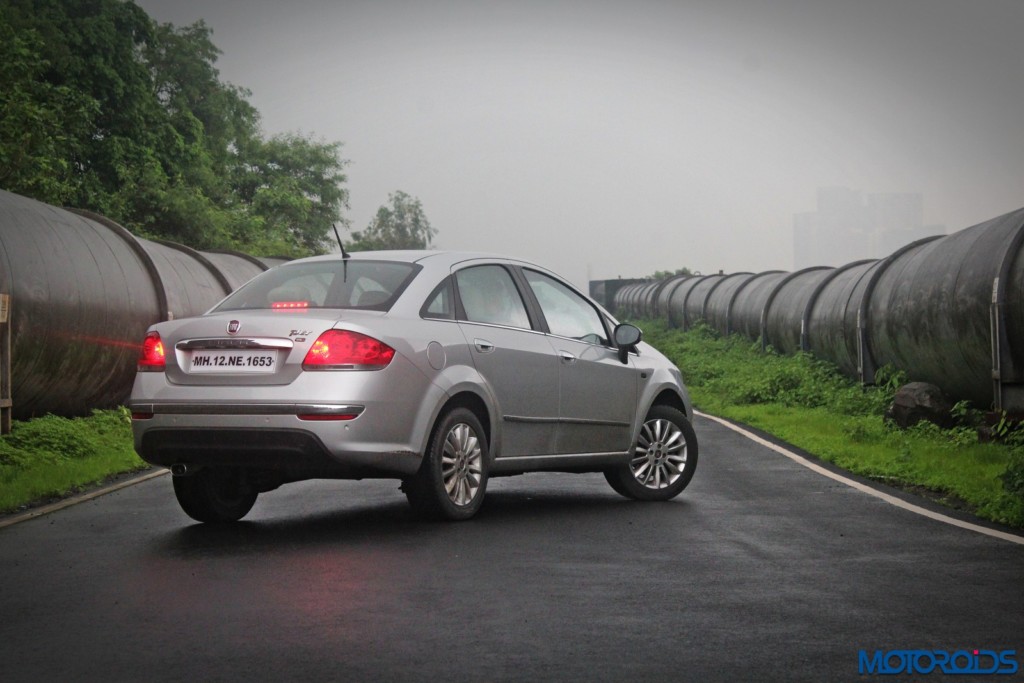 On the downside, the fuel efficiency isn’t the best out there. Moreover, Fiat’s operations in India are under a bit of a shadow. The cars are not moving off the shelves, service isn’t the best and resale value of the brand’s products as a result is plummeting.  And that’s a shame, for the Italian carmaker is dishing out some really good products their respective segments.