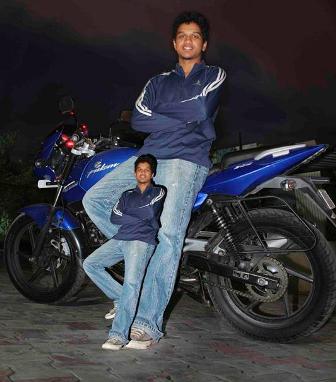 With 14,000 Km on the odometer and around 1000 Km after the last servicing, everything seemed to be in the best nick on the Pulsar 200. But all that changed one day on my commute to my work place, when the oil indicator started blinking.

As this had happened few times before, I gave a call to the service station, to figure what was going on. On contacting them, I was advised to ignore it and was further informed that the only way to check the oil level in the bike is when you drain it. Well, that was a very thoughtful piece of advice, I must say!

So I ignored the blinking indicator and rode around the city. Suddenly, the 200 started whining and producing the dreaded cluttering noise, whenever I tried to open the throttle. Within few seconds, the engine gave up. Yup, I had managed to blow the engine. After just three days at the service station, which was surprisingly quick, the bike got a new set of piston and a head block. Thankfully, everything was fixed under warranty.

Since then, the 200 while still in the breaking-in period, has not given me too much to worry about. I’m getting a great mileage of around 40 to 45 Kms to a litre on my everyday commutes, while it drops to about 30 to 33 Km to a litre, when I switch on the sport riding style.

The Pulsar 200 handles pretty well with the seating position being very comfortable for the rider, but it’s not too great for a pillion for those long weekend rides because of the high placed step seat. The gearbox is still as smooth as it was initially, but once in a blue moon, does give away false neutrals. The huge turning radius could be a pain while moving the bike in claustrophobic environs, especially for a person like me who stands just about 5’ 4 inches in height. The headlamps could also have been better, as the light throw is not ample for night riding on the highway.

It hasn’t exactly been a dream run, and the engine blow-up wasn’t exactly a good experience. However, I think it was a bit of my (and the service station guys’) fault too to run the bike without checking oil levels. After a year of owning the 200, I am generally satisfied, and don’t really have anything much to complain about.