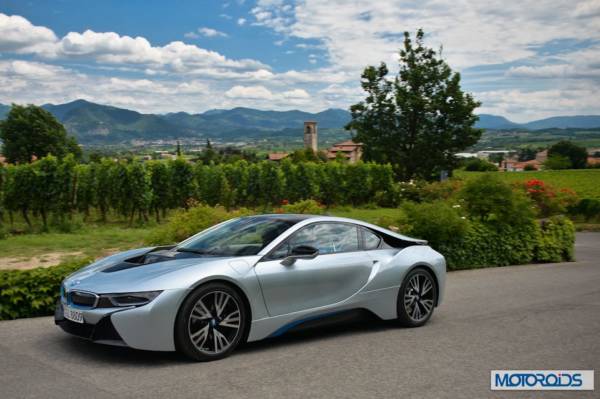 I was really excited on the road to Milan, Italy as one of the journalists who were invited to drive the brand new BMW i8. This was the car I wanted to test more than any other in 2014. Why? Because the i8 is unlike any other sports car on the planet today. BMW promotes it as the “most progressive sports car”, which is an understatement: the BMW i8 is the sports car of the future! 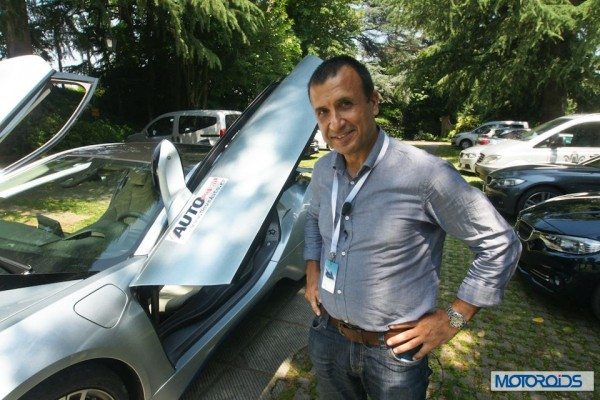 In essence, the i8 is a plug-in hybrid sports car with fuel consumption and emission levels of a city car. The i8’s construction involves a carbon fibre capsule bolted on an aluminum/magnesium chassis. However, the drive train is a nod to the future- a 3 cylinder turbo-charged engine driving the rear wheels and an electric motor at the front generates a combined power output of 362 horsepower. The car is designed from scratch -a proof of BMW technological excellence and a firm answer to ambitious new players in the automotive business, like Tesla. 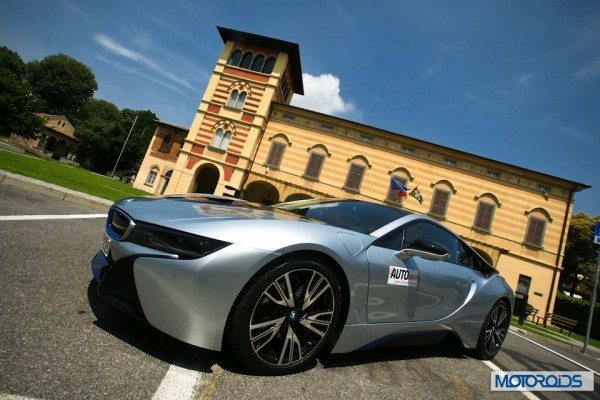 The i8 brings in its class a new term: sustainability. The German maker chose Milan for the presentation of the car for a reason. The industrial and financial capital of Italy is getting prepared for the Expo 2015 and aims directly to the future, exactly like the new BMW sports car. Journalists were accommodated in Porta Nuova, a new, futuristic district in downtown Milan, where sustainable skyscrapers are mixed with bio food joints and Italian “haute couture”. The test drive route would lead us from Milan to Iseo lake where, some of the best Franciacorta wines are produced. 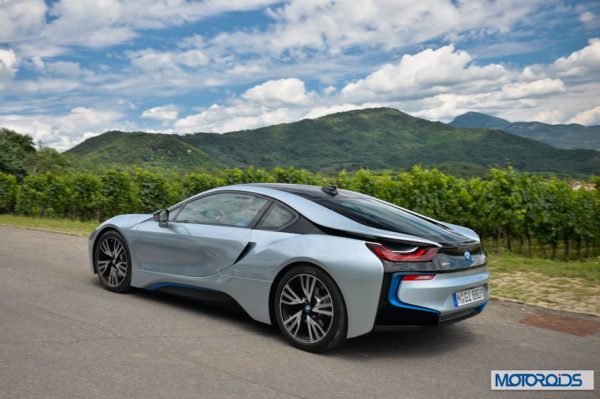 Our hosts wanted us to taste a postmodern, stylish, eco-friendly but high class lifestyle, the essential values for the potential i8 buyer. They didn’t need to do that much, given the specs of the car. Even if they had decided to present the i8 during the Munich Octoberfest among thousands of big, totally inebriated Germans, their message would have been delivered the same! 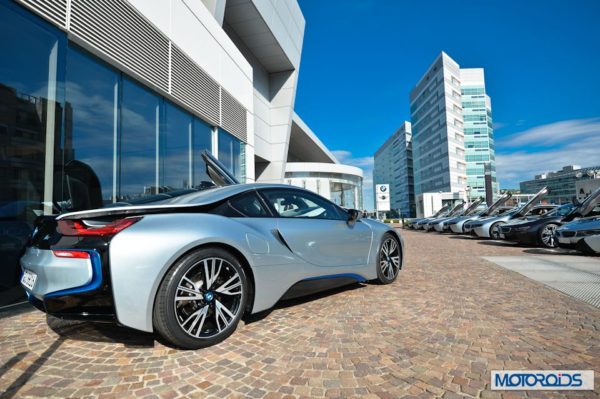 The BMW i8 looks like a concept car that escaped from the Frankfurt motor show floors. The car was born as a concept car actually. Do you remember the Vision Efficient Dynamics concept that BMW launched in 2009? The production version is exactly the same, except the transparent doors and a few other fancy details the concept featured. But the doors open marvelously, like scissors. 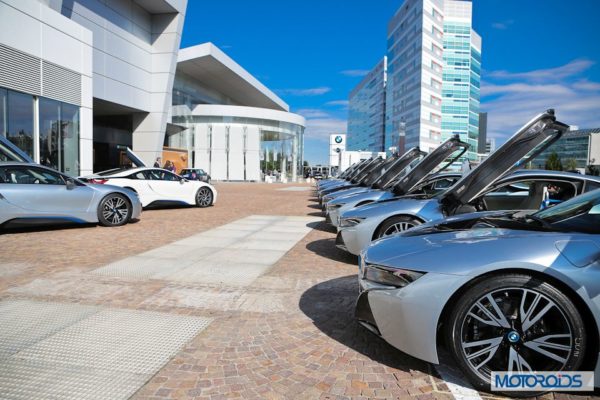 Designed by French designer Benoit Jacob, the i8 is a splendid study on aerodynamics and futurism. It is the first car in the world featuring laser lights that are 30% more powerful than LED lights. Drag coefficient is only 0.26, an impressive value for a sports car. BMW designers worked hard to get there making some courageous choices in order to simulate the perfect aerodynamic shape produced by nature: a drop of water. They created a sculptured; three dimensional rear end to let the air dance nicely on the back. Thanks to this and to all the external features the car is a real head turner on the road.

Next page for Chassis, Performance and Handling>>>

The car is based on a state of the art platform. The passenger cabin – that BMW calls Life Module – is made of Carbon Fiber Reinforced Plastics and is bolted to an aluminum frame (Drive Module) that supports the engine, the suspension and the lithium-ion battery pack accommodated where the central transmission tunnel should be. As a result, kerb weight is only 1485 kg, distributed ideally (49-51% front-rear), just like in any other BMW. 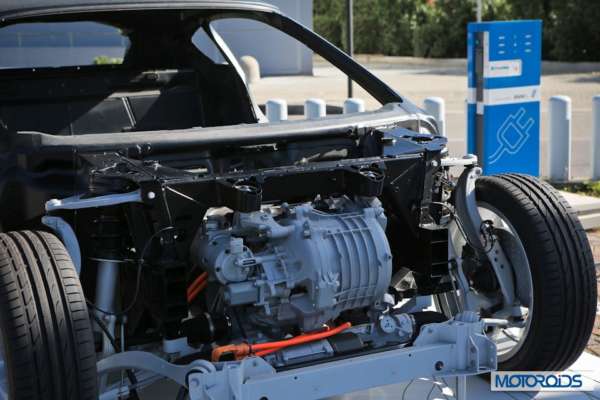 The BMW i8 features two engines, an electric motor on the front capable of 131hp and 250Nm (the same used on the i3) and a three cylinder, direct injection, 1500 cc turbo at the rear capable of 231 hp of power and 320 Nm of twist. The engine is coupled with a small electric motor that works as a starter, charges the batteries on deceleration and generates boost to the internal combustion engine at full throttle. The two power units work together and are controlled by an electronic unit that uses appropriately each one according to the driving needs, while charging the batteries.

What’s the fuss of all this hybrid technology pandemonium? The i8 is more than anything else an investment to the future for BMW. Apart of being a real life demo of technological superiority, the i8 is supposed to save BMW millions of Euros / Dollars from potential fines coming from US and EU emission regulations. The total budget of the “i” program is around 3 billion Euros. With such money, BMW gaps some holes and opens new roads for the future. For the user of the car, hybrid technology means it consumes half the amount of petrol of its average competitor (ECE cycle is only 2,1 lts/100 km) and it emits only 49 gr/km CO2, which might result in lower road tax in more countries. 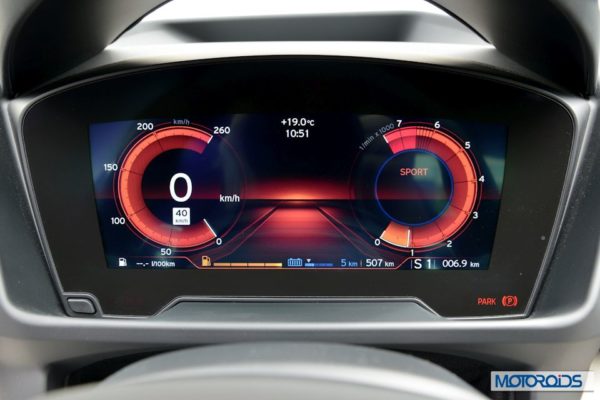 Sitting behind the wheel of the BMW i8, the first thing to do is to forget the stereotypes that are valid for the conventional sports cars. Apart the numbers that describe its performance (250 kmh top speed, 4,4 seconds for 0-100), the i8 is like no other car. It was made to be in a class of its own -a new, completely fresh approach, something more than a driver’s car. Driving the i8 is like taking a glimpse to the future and as a result hard core petrol heads might be disappointed by the car’s behavior. What do I mean? 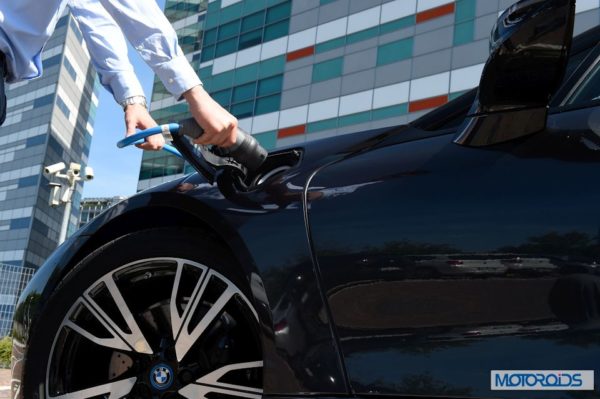 At first hand, the car will always start in electric mode, exactly like the i3 city car. The electric range is up to 37 km according to BMW which is more than enough to eerily slither out of a metropolis like Milan solely on electric punt, listening only to the tire noise and the electric motor whirring, without emitting the foul stuff and literally with zero costs involved (apart the charging cost). Practically, electric range is easily 20-25 kms.

The car is responsive and lively in eDrive mode and stays like this till you kick down or till it runs out of charge. Top speed in all-electric mode is limited to 120 kmh. When you release the right pedal, deceleration is not as dramatic as in the i3. 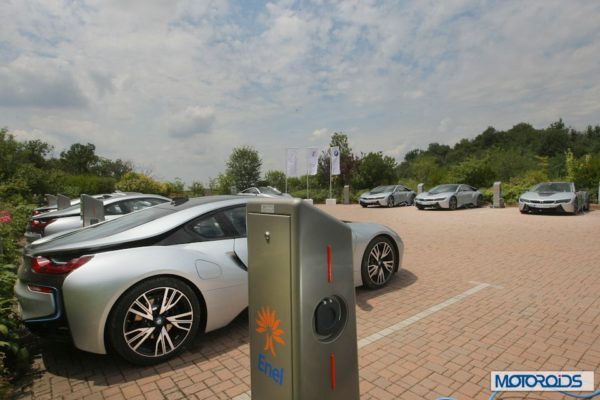 There are three more driving modes available with each one giving a distinct personality to the car: the instrument cluster changes color and content on each mode but most importantly the cooperation between the two power units changes as well. In the basic Comfort mode, the car is a pure hybrid machine, combining electric and combustion power. Eco Pro mode is more directed towards saving the planet by choosing predominantly electric power while minimizing power loss on A/C. 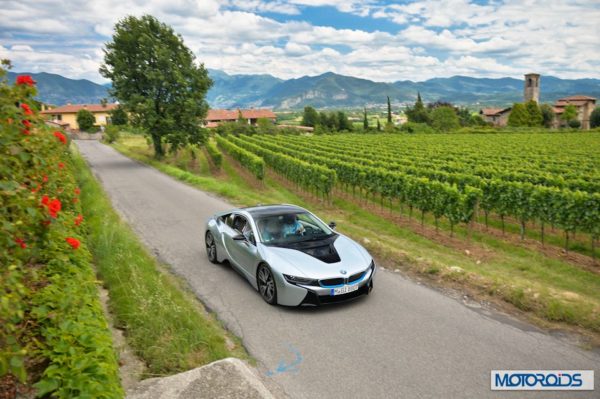 There is also a Sport mode, probably conceived for petrol heads like you and me. Here the petrol engine is power boosted electrically, the batteries get charged faster, the electric steering wheel gets sharper and the electronically controlled shock absorbers get stiffer- after all, it’s a BMW. Thanks to its high end logic, the BMW i8 is Dr. Jekyll turned to Mr Hyde with the push of a button, or simply by mashing the right pedal. It transmits a feeling of a lighter, smaller than it is, maybe because the cockpit is pretty narrow and the futuristic dashboard sits pretty low but mainly because the steering wheel is very light – lighter than in any other BMW.

Seating position is quite low, which means you need to be fit to enter the car. The instrument cluster in front of you is very modern but not bright enough for easy legibility in daylight. For this reason, the neatly designed and perfectly positioned Heads Up Display makes sense. The interior design isn’t a patch on the dramatically styled exteriors. It is contemporary, minimalistic and neatly laid out – it would actually fit perfectly in a BMW 1 Series. 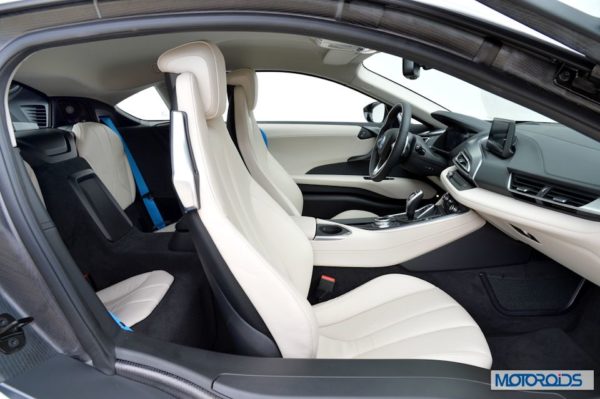 Driving the BMW i8 is a refreshing, very interesting experience, thanks to its twin character, but not as exciting as you would expect from a modern sports car. If you like to drive smoothly and silently, the eDrive mode is perfect and makes you feel as if you are behind the wheel of the De Lorean, the star of the Back to the Future films. If you need more power, you simply need to kick down and ignite the 3 cylinder turbo engine nestled behind your seat. The petrol unit roars like an American V8 (really!) and the light BMW accelerates with the strength of a standard Porsche 911 Carrera. The engine sound is cleverly emulated by the audio system, a trick that BMW doesn’t mention in the press kit- something on the lines of the F10 BMW M5. 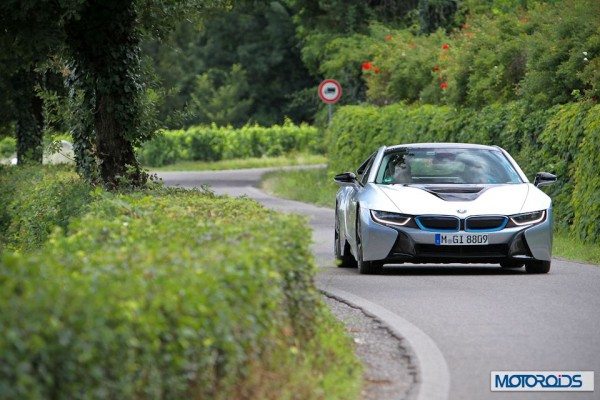 What about the handling of the car? Suspension wise, it is very sporty, with short spring travel and very stiff shocks. Thanks to the rock solid Carbon-Aluminium chassis, the handling is sharp and effective but not as sensible as you would expect. In other words, it is easy to get in a corner very fast with zero roll but the feedback from the road will not be there. You simply can’t make the car under steer or over steer; it is simply neutral on good tarmac. It doesn’t roll, it doesn’t pitch, it doesn’t speak to you, and it just does the job clinically. You can’t even say if you drive a front, rear or all wheel drive car at any moment. Actually i8 is all the above depending on the situation.

As a result, i8 is a car made to be driven fast with even the most basic driving skills. On the limit it’s neutral to under steer, that’s it. But you know what? Now I have start writing like an old school tester, using terms like over steer and under steer; pitch and roll; weight distribution and transfer- all of these terms are destined to be history in a short while. Whether we like it or not… 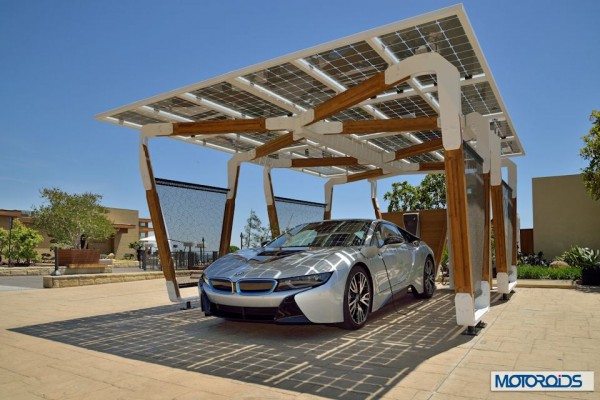 BMW wants us to travel to the future with i8. And in the future it seems that nobody will care about the unquantifiable weaknesses of the cars, the ones that made us love them on the road. Cars will simply be fast, very fast, and effortlessly fast without making your heart beat stronger or let your brain get involved in the whole experience, either during a perfectly executed drift or even after a disappointing spin.

This seems to be the new doctrine that BMW introduces in the sports cars class: maximum efficiency, minimum information from the road- which equates to minimum fun, at least for you my dear petrol head…

In any way, the new i8 was not conceived for you (and me). It was made for wealthy guys who get bored of the same old Porsche 911s (or Audi R8s) and they just need something more advanced, more sophisticated to drive and show off. Something new to talk about with their rich friends, something socially responsible, eco-friendly, a sustainable car that makes the planet better for the kids – or at least it doesn’t make it worse. The BMW i8 is exactly this. Do you wonder if BMW will win this bet? Be assured that it is won already!