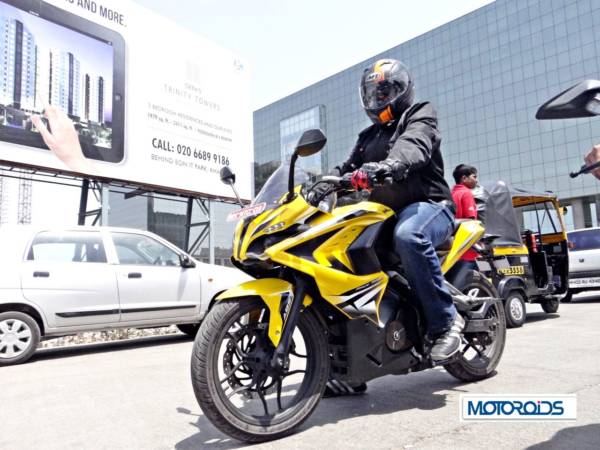 After a definitive and exhaustive track review, we test the new Bajaj Pulsar RS200 on the road, especially in the city, where most examples will be spending time in. No limits were approached, as we took it for an urban sojourn in Pune, just to evaluate its performance in real world conditions as a commuter, as well as a weekend entertainer. [Huge thumbs up to Tushar Arunan for riding, assisting the shoot and being a sport]

I’d seen enough of it in pictures and was pre-occupied, so when I picked up the Pulsar RS200 in Pune, I merely glanced at the bright yellow caricature of a front and took off.

Gave it one whack through the gears just for the sake of celebrating motorcycling, and settled into a cruise, for the sake of contemplating about the task in hand. My thoughts were swayed by this big black blob riding alongside. I notice to see a all-black Mahindra Mojo prototype; it’s test driver taking a generous visual dab at the Pulsar. No expressions could be gauged behind that black visor, but he sure was hooked. As he saw me stare back, he dropped an appreciative cog and buzzed away. I did try, but couldn’t keep up, but anyway…. 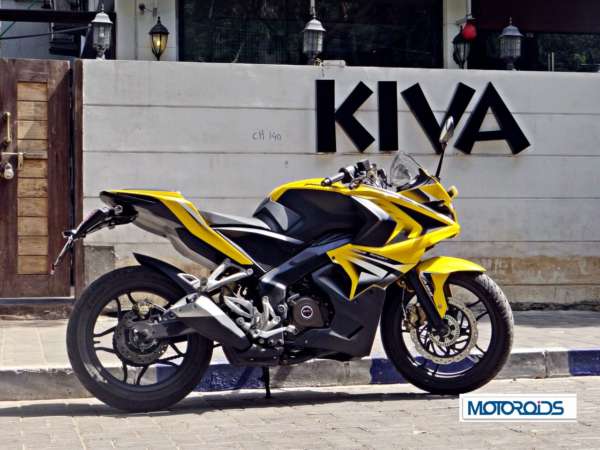 The manager of one of the prominent lounges in Koregaon Park, Pune couldn’t seem to take his eyes of the RS, as we stopped for a quick picture. He couldn’t believe that this wasn’t one of those imported motorcycles that tear up the lanes in this part of the town frequently. “I can’t believe it’s a Pulsar”, he said. Our man was completely sold, and the bright yellow RS200 seemed to have made his day. Will he serve me free beer if I get my girl on a date? I wondered.

After a handful of staring instances on the road, I stopped to take a good look.

Does it look that good? 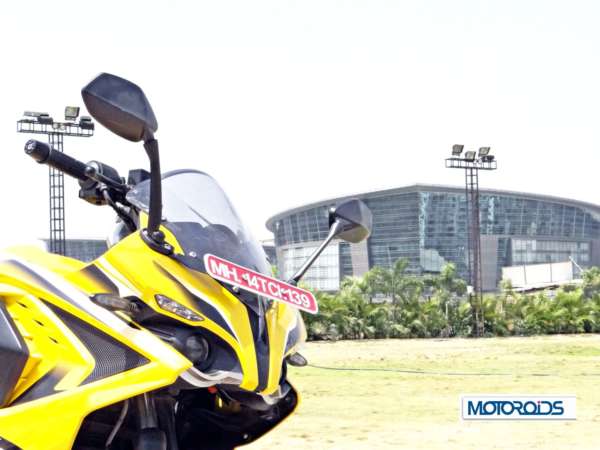 To some it does.  Not to me. But that’s just personal,  having been an industrial designer and developed a finnicky taste in design in the process. The front is a Transformers cliché, the full fairing is psychedelic, the livery is loud and the rear looks like a tree with tail-lamp like branches. But one thing’s for certain – it hypnotizes you to look at it. The fairing’s sheer volume, the busy styling and that bright yellow paintwork works, clearly impressing most of the folk. The kids love it the most!

The looks are not meant to impress the discerning connoisseur, or admirers of good design. So if you worship the labor of Massimo Tamburini and Pierre Terblanche, you would have already looked away. But as we saw earlier in the day, she impresses plenty, so it works. Levels of fit and finish though, especially the edges of some panels could have been better. 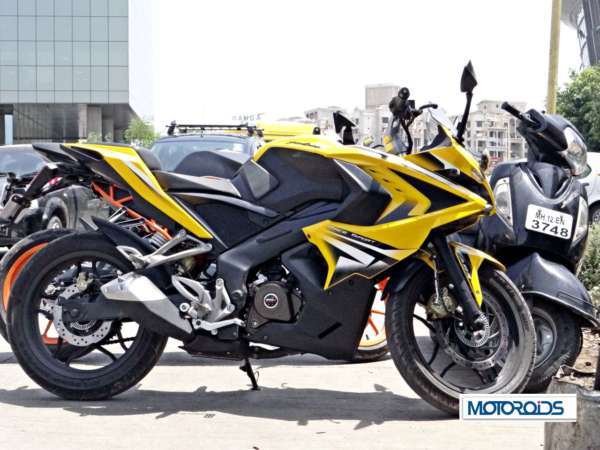 There are lines, curves and gashes on this bike that you might notice after 5 years of owning one. 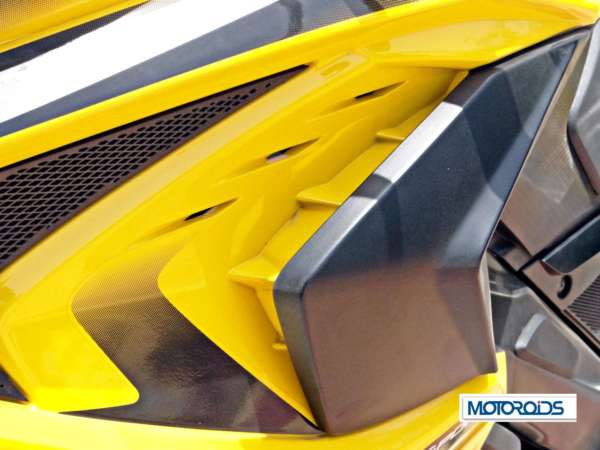 Too much in places.. 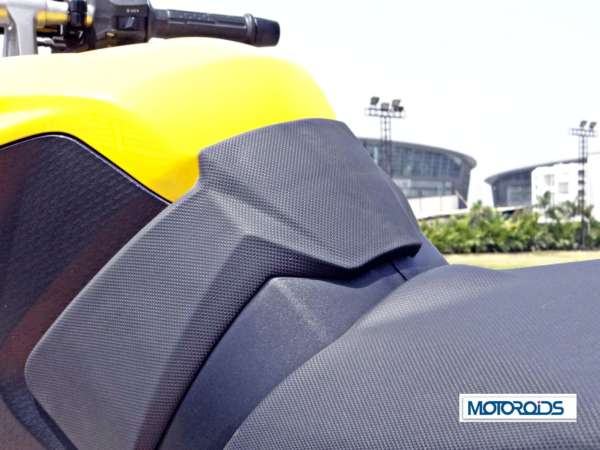 The tank pad works beautifully, saving your jewels and thighs from feeling metal. 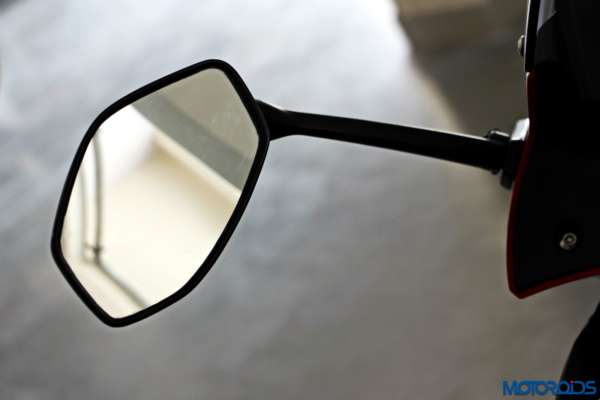 The fairing mounted RVMs are vibe-free, but could have done with a larger mirror surface area. 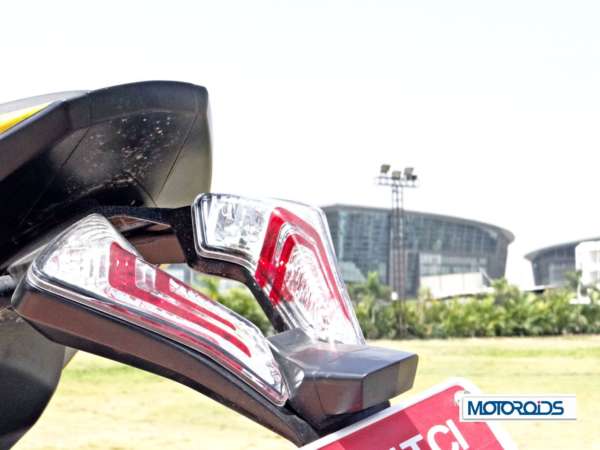 Those “Crystal LED tail lights” might look cool, but allow a lot of muck through, some of which might stain your beloved’s bottom. 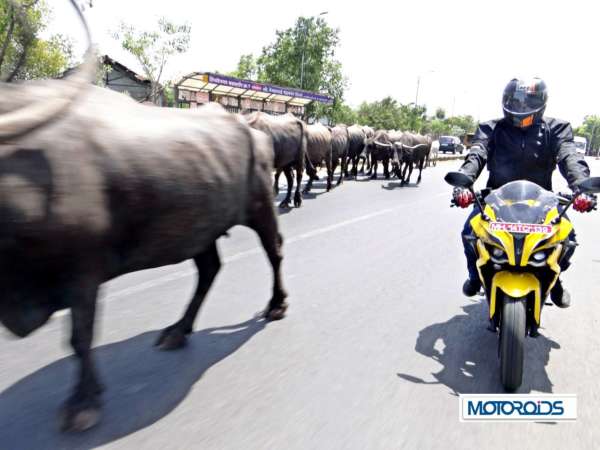 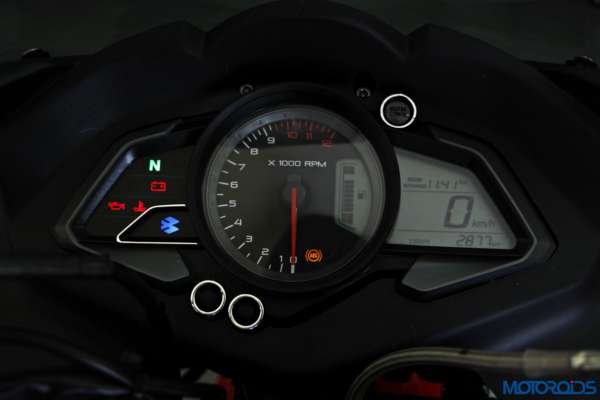 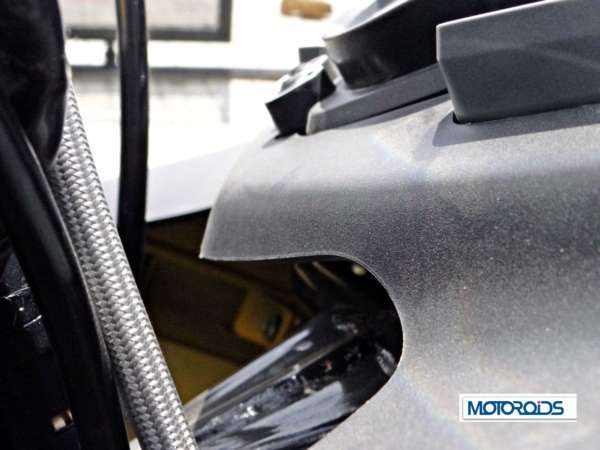 Scratchy edges – the RS200 could do with a little more polish as far as the finish of some panels is concerned. 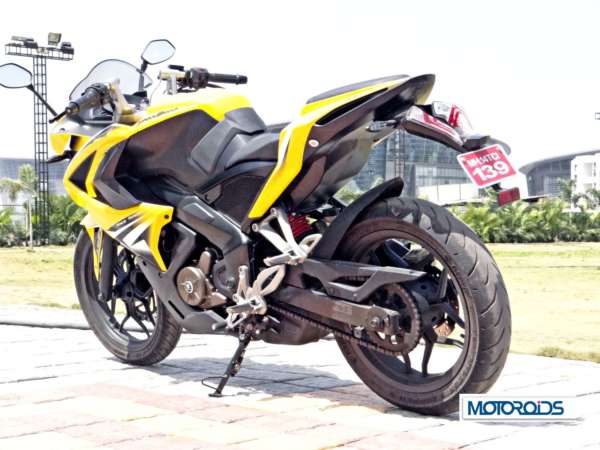 Personally, the best angle to stare at the RS from.

Next page for a city slicking RS200>> 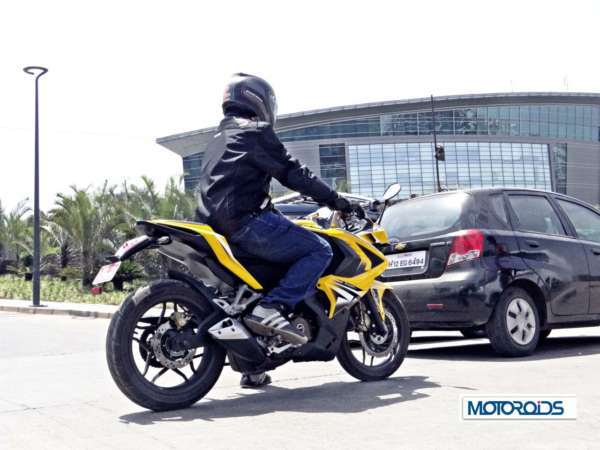 The riding stance is pretty relaxed, contrary to what the full fairing and the “Race Sport” lettering would like you to believe. For taller people it’s almost upright. For others, it is very mildly leaning forward. The foot-pegs are also slightly rear biased, but not committedly so. The tank pad is quite generous, and feels like an extension of the seat, especially with its knee guards. It’s quite a handy element, and you don’t feel metal between your legs.

The split seat just has the right amount of padding for a motorcycle of its kind, with it being neither too soft, nor too hard. The pillion gets a couple of hidden recesses to hold on to, but she prefers holding me. Optimum handlebar positioning means that you aren’t left with sore palms after your boring commute, which the RS200 aims to cheer up. 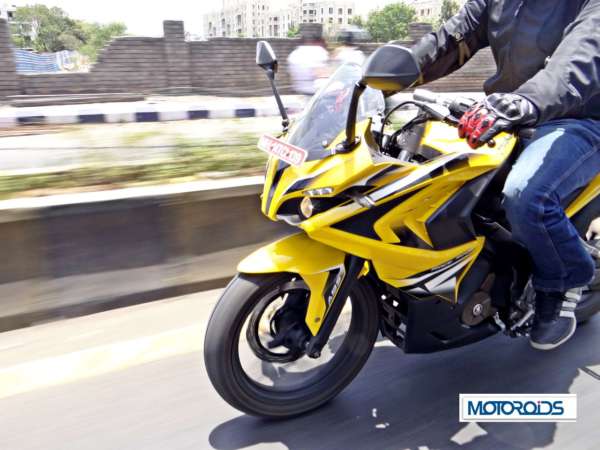 The fairing and aggressive bodywork are a façade that cleverly cover up what in essence is an everyday motorcycle. Instrumentation on the RS is also a carryover from the NS, and remains legible enough. In the dark, it glows blue, but the coolest trick has to be the bright orange upshift light, that blinks feverishly once you hit the 11,000 rpm redline.

To see that light, you have to really ride it by the scruff of its neck – something that the RS200 encourages every time you take it for a ride. The RS200 is quite a hoot to belt in the city. Fuel injection means slightly more response from the  199.5cc Liquid Cooled four valve  DTS-i Triple Spark Engine, which now emits 24.5 PS@ 9750 rpm,  1 PS over the NS. However being a faired motorcycle et al, it is 12 Kgs heavier too. So it doesn’t wallop your bottom any better than the NS, but as mentioned before, the BOSCH FI unit translates into more responsiveness and better refinement. 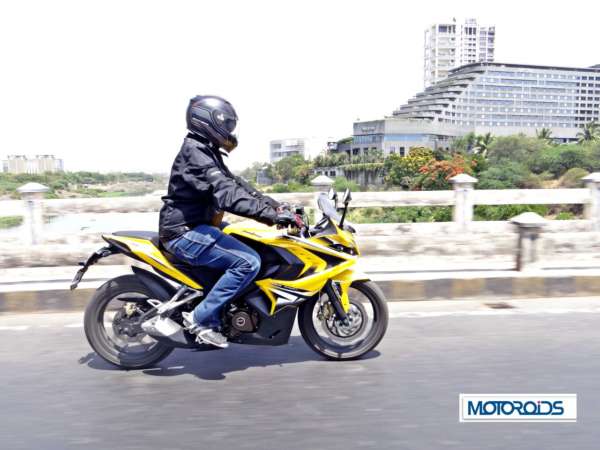 Any gap in traffic is thrashed shut with a burst of DTS-I chatter and fuel-injected whir, with the revs playfully bouncing off the limiter. Slightly shortened gear ratios also help the cause. Low end response could have been slightly better though, and she takes a moment to uncoil. Mid-range is meaty, while top-end, as has been revealed in detail in our track review, redefines Pulsar territory. Compared to the KTM 200’s snappiness, the Bajaj is more linear and forgiving with its power delivery.

The 6-speed gearbox is smooth, but it isn’t silk. Low speed shifts are clunky, and if you want to settle into a high-geared cruise, low speed cruise, you have to exercise your left toe a bit. The clutch is impressively light, and the engine is tractable, and settles into a comfortable hum when you just want to potter around town. 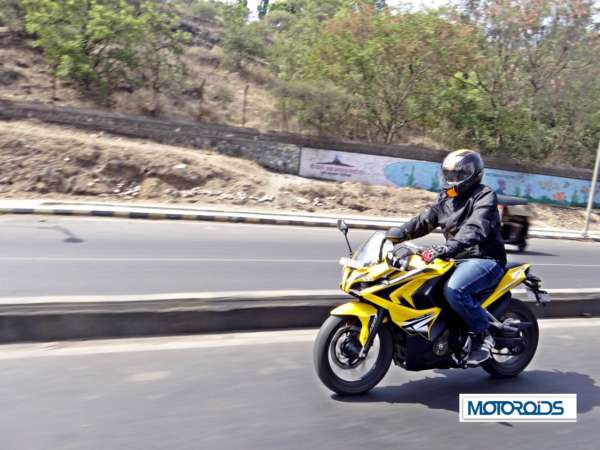 For sharper handling on the limit, Bajaj has decreased the rake angle by 1 degree for sharper and quicker turn-ins into corners. They have also reduced the wheelbase by 5mm and lowered it by 6mm, making it more agile than before. But, of course, these alterations don’t reflect in the city. The RS200 is a genuinely well poised motorcycle, and the ride quality, in my opinion, is brilliant. It is also extremely well-mannered in traffic, and doesn’t throw a tantrum or heat its guts off in stop-go conditions.

The perimeter frame and rear mono-shock gives it genuinely good stability, and excellent handling credentials, something that has been explained in expanse in our exhaustive track review. In the city, only an iota of the capabilities can be experienced, but it showed good promise and ushered immense confidence. Not that I pushed it, but the newly developed MRF soft-compound feels sticky enough. 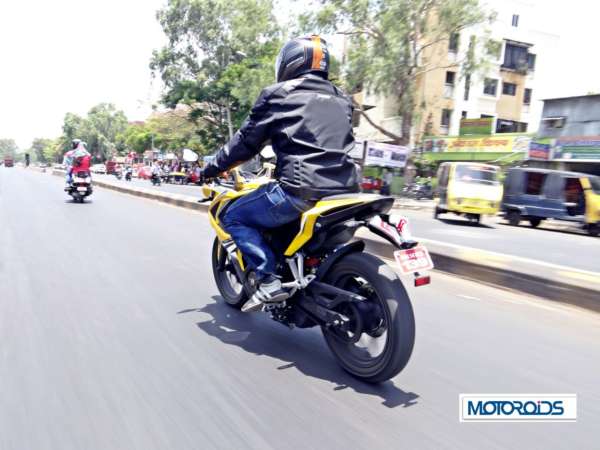 The brakes are superb, and the addition of ABS clearly makes decelerating a safer experience. But the single channel setup means that the trickery is just limited to the front brake, which is fair enough for the price and performance. It can get a little weird at time though, especially under hard braking, with the front keeping holding its line, and the rear dancing around a bit.

In spite of hard riding throughout, the RS200 returned approximately 34.2 km/l, fairly shy of the claimed 54 km/l.

Next Page for Verdict, Tech Specs and Image Gallery>> 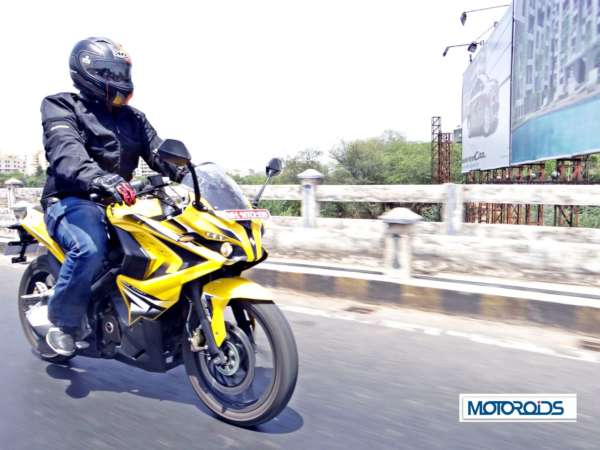 The RS200 lives up the Pulsar legacy – a motorcycle which appeals to the masses, is commuter friendly, fairly affordable, fairly fast, and has great street cred to boot. Longer jaunts are welcome too, but we suggest you save it for the AS200. The styling is mega when it comes to sapping attention, the refinement stellar, performance brisk and the ergonomics spot-on.  At Rs 1.18 lakh for the non-ABS version and at Rs 1.30 lakh for the ABS version, ex-Delhi, the RS makes a compelling case for itself. In the city, which should be its natural habitat, the RS performs great with all intents and purposes. Personally, the styling isn’t up my alley, and nor are the overall levels of fit and finish.  The RS200 shares much of its mechanicals with the existing Pulsar , so it isn’t much of a revolution, but what an evolution! 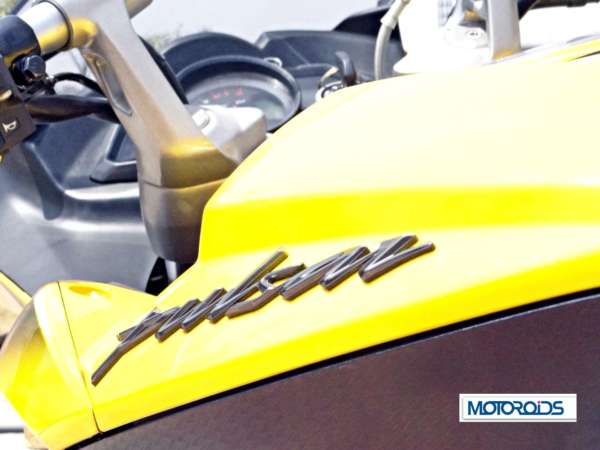 It isn’t a full-bore sports bike by any means, but a capable, fast and comfortable premium commuter, which tries to veil its character by looking overtly sporty – but the latter just increases its appeal to fans of the brand and beyond, so it’s understandable.